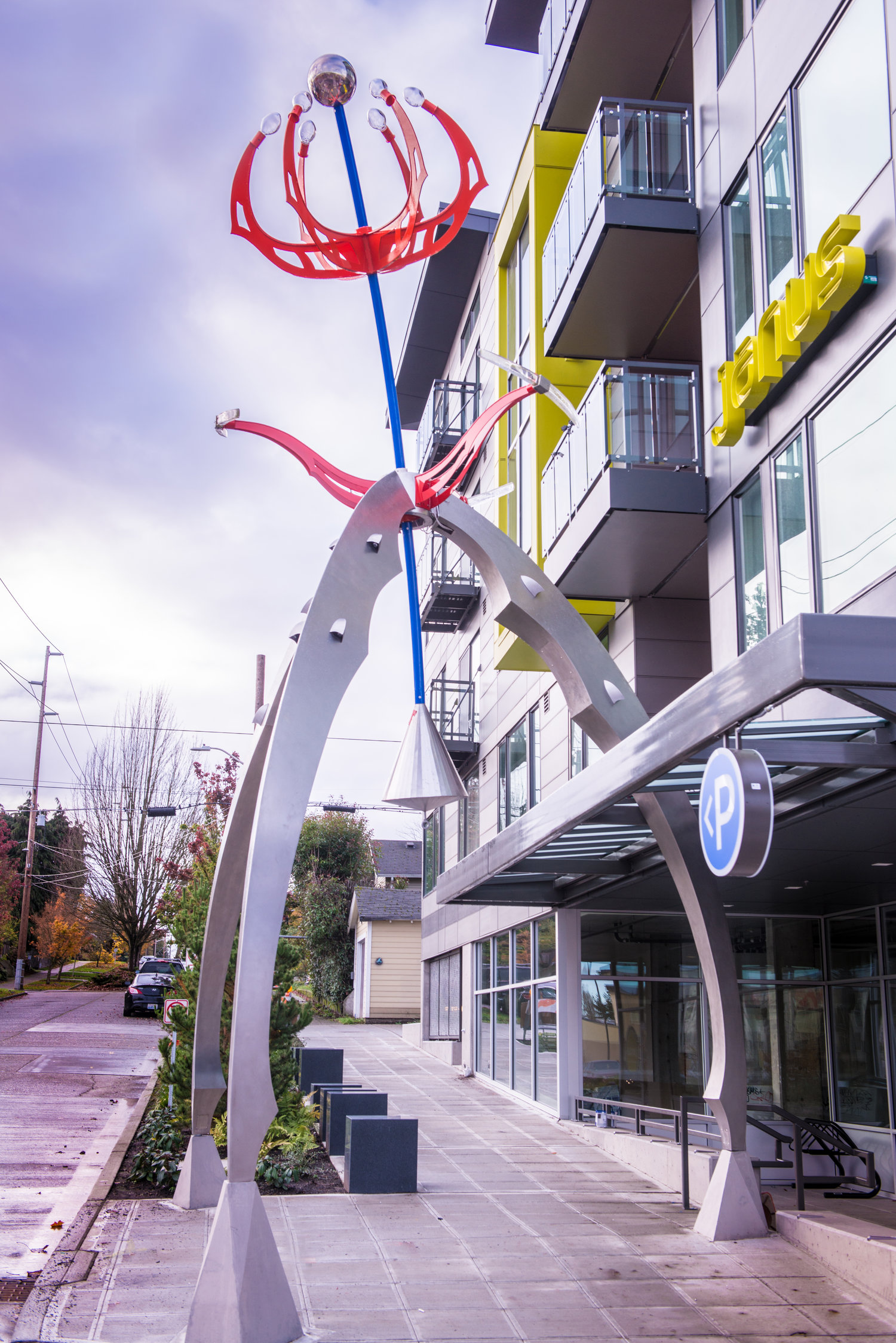 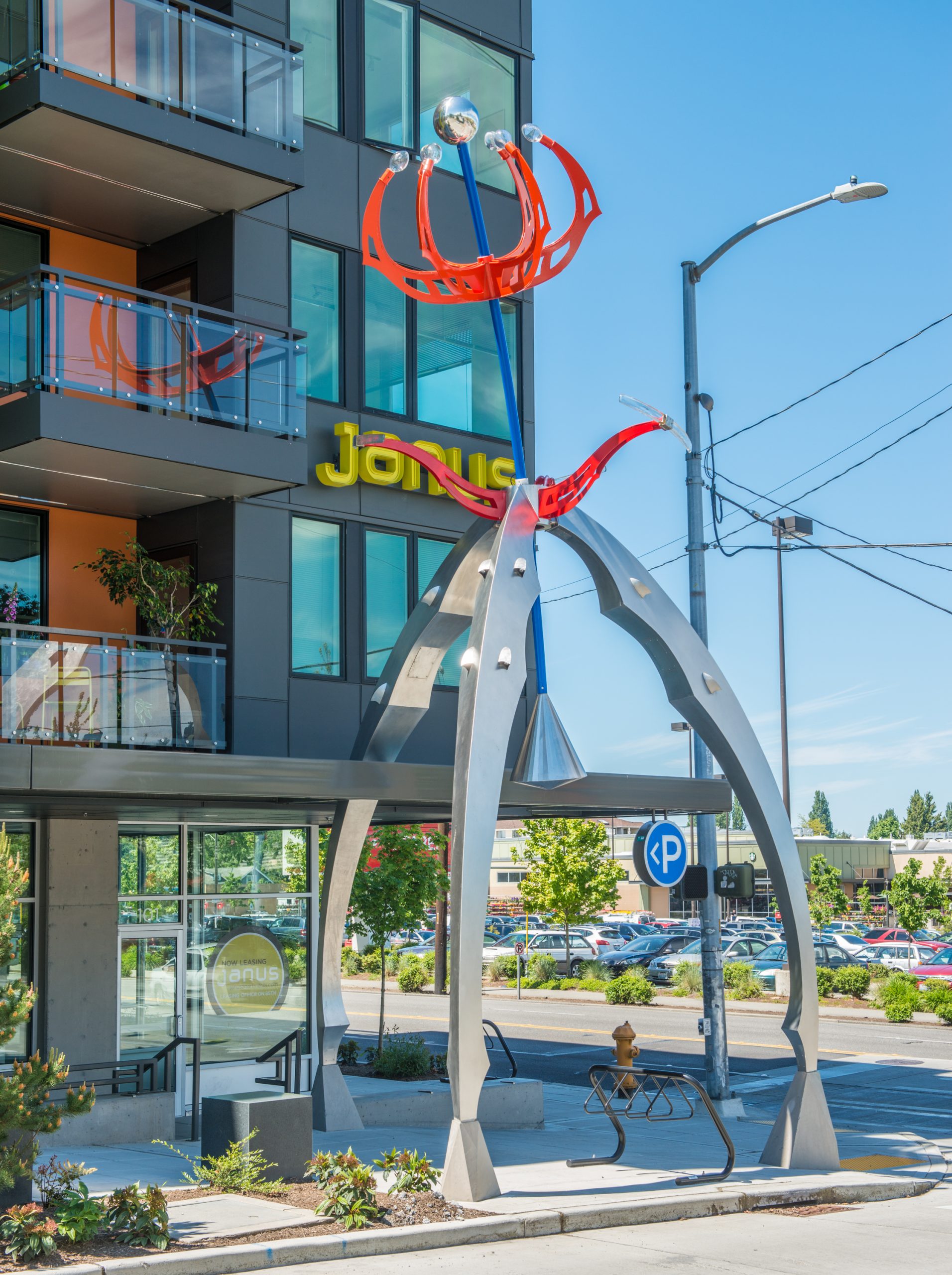 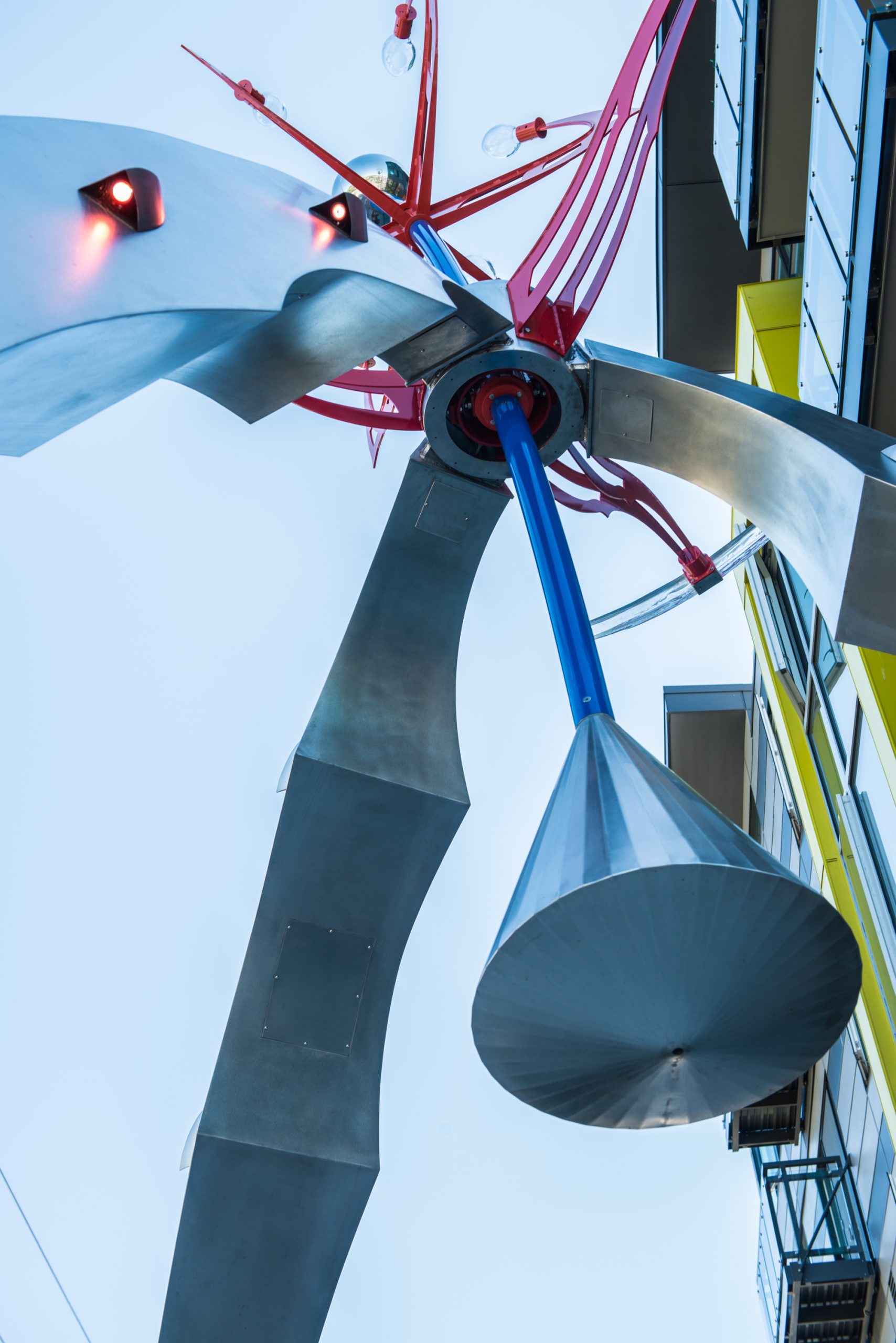 Standing three-and-a-half stories tall, straddling the sidewalk, and piercing the awning of the Janus Apartments at 85th Street in Seattle, WA. Perseus II was commissioned by Security Properties Corporation to highlight a signature building. Shipbuilding techniques were used to fabricate the three stainless steel legs. Perseus II incorporates a kinetic, wind driven pendulum with a three-axis gimbal. The crown element includes LEDs and hand-blown glass globes. There are twenty one DMX programmable RGBW LED units, four per leg and one per each piece of glass, 6 in the upper crown and 3 in the lower crown around the gimbal.

The predecessor to this piece, Perseus I, reflects a metaphor and question regarding man, heaven, God, and faith. Did God create us, or did we create him?
Early on, Perseus II was an extension of this same conceptual question, but quickly began to relate to Janus, both the building and its namesake, the mythological God of the ancient Romans. Janus is the God of beginnings, gates, transitions, time, duality, doorways, passages, and endings. He is usually depicted as having two faces, since he looks to the future and to the past.
As I explored the site, it became clear that in this new context Perseus II was to be a gateway between the residential and commercial sectors on the arterial that is 85th. The manner in which it sits on the corner, across from a bustling commercial block, commands a presence as it anchors the corner and pierces the awning of the building.

Edwards’ creative process is … fundamentally a collaborative one, as his practice includes the act of sharing as a kind of material and his achievements are the work of a team, much as a glassblower is supported by gaffers. Edwards’ imagination is restless enough to continually seek new modes of presentation or display.

One morning we were getting in his beloved VW Vanagon and I asked Miguel what was on his list. Miguel responded with "what's on yours?" I answered, "get the spacers plasma cut, get the large disks cut for the counter weights," and there was a third item. And then I said, "so what's on your list?" His reply astounded me. He said, "see Keith, see Steve" and a third person. They were the same lists. It was an epiphany for me.

As I neared the end of this arduous journey, I realized that what Perseus II really meant to me was community, collaboration, friendship and perseverance. This project reinforced what I have known all along: inspired people, working together, can do anything.

Plans for “Perseus II” had to be closely coordinated with building drawings so that one leg could pierce the awning of the building. In order for it to straddle the sidewalk, a Seattle city ordinance had to be approved by City Council and signed by the Mayor--this gave me the experience necessary to work with every changing site dynamic. I have recently learned that the Mayor’s Office of Arts and Culture has been using "Perseus II" as an example for some of their For Public Art boot camps.