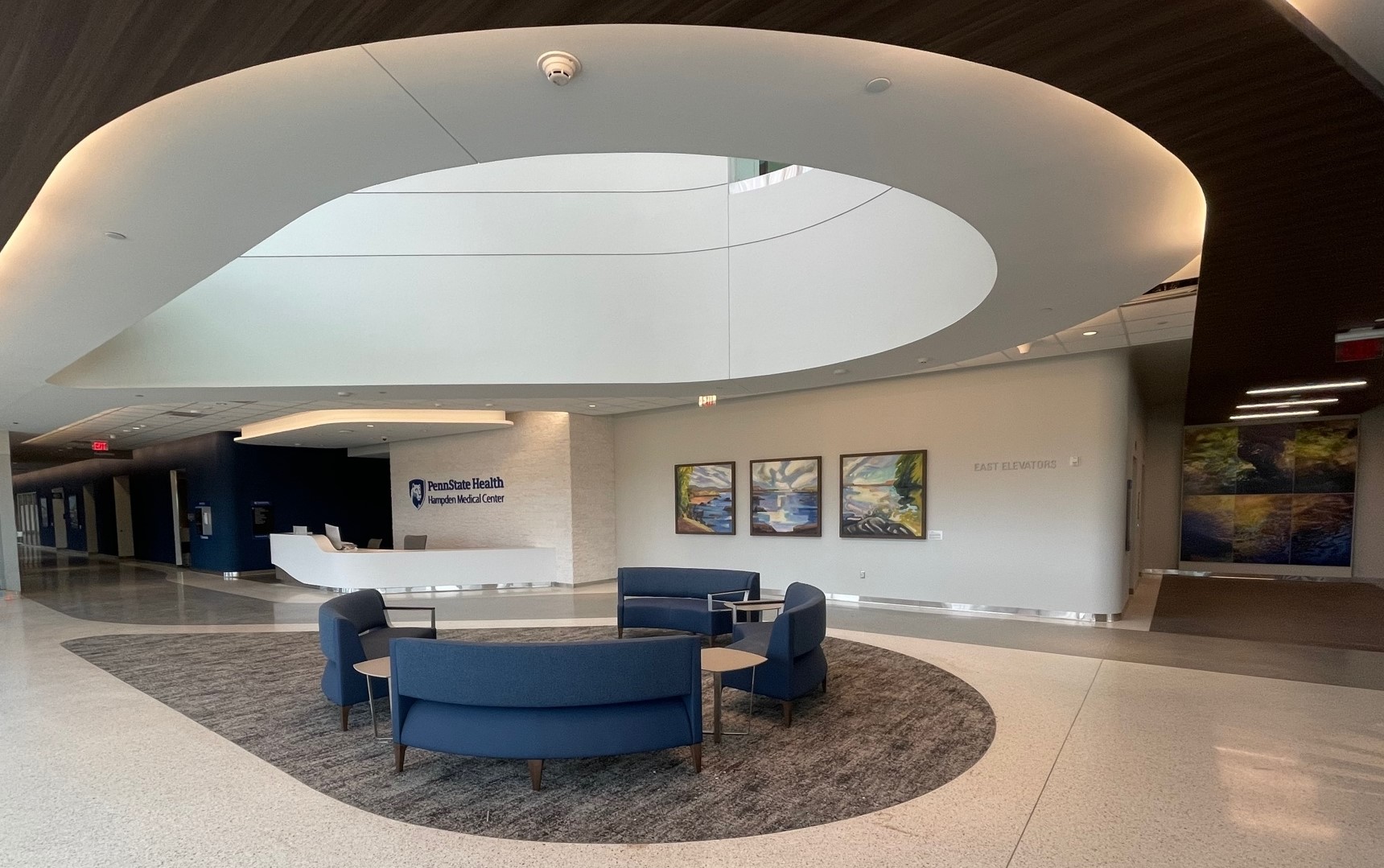 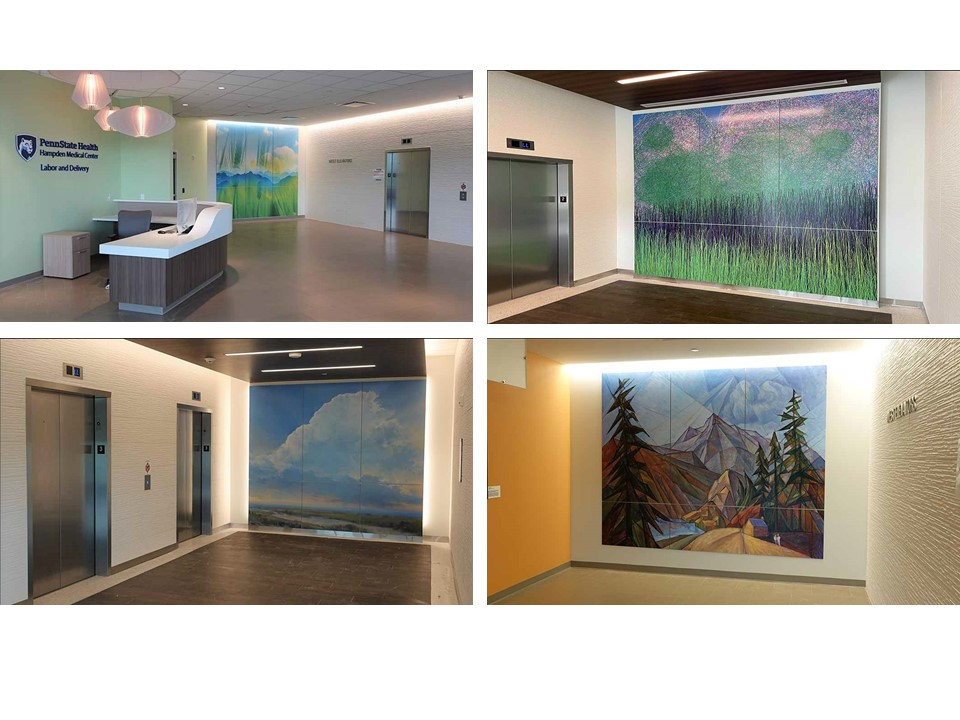 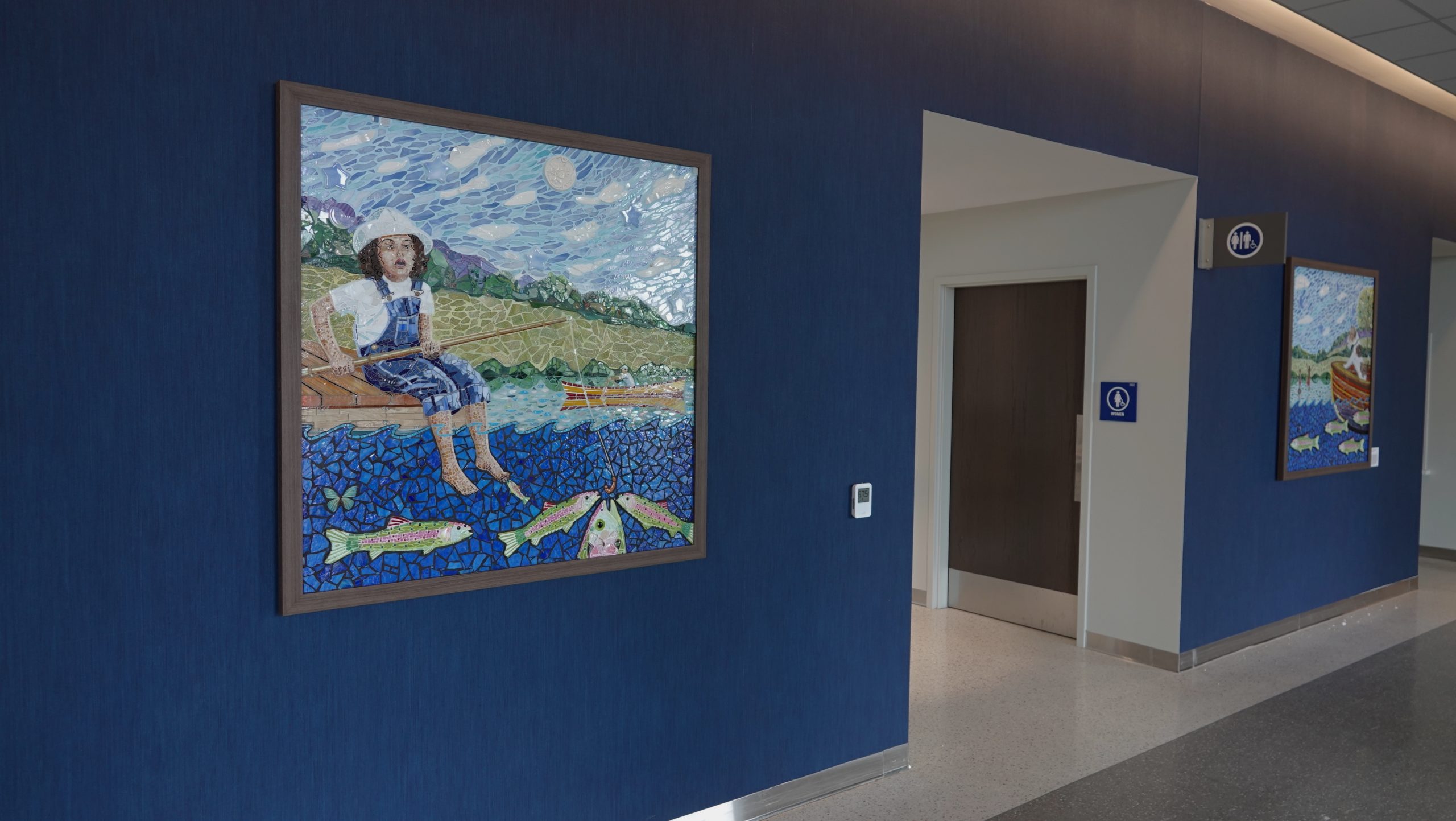 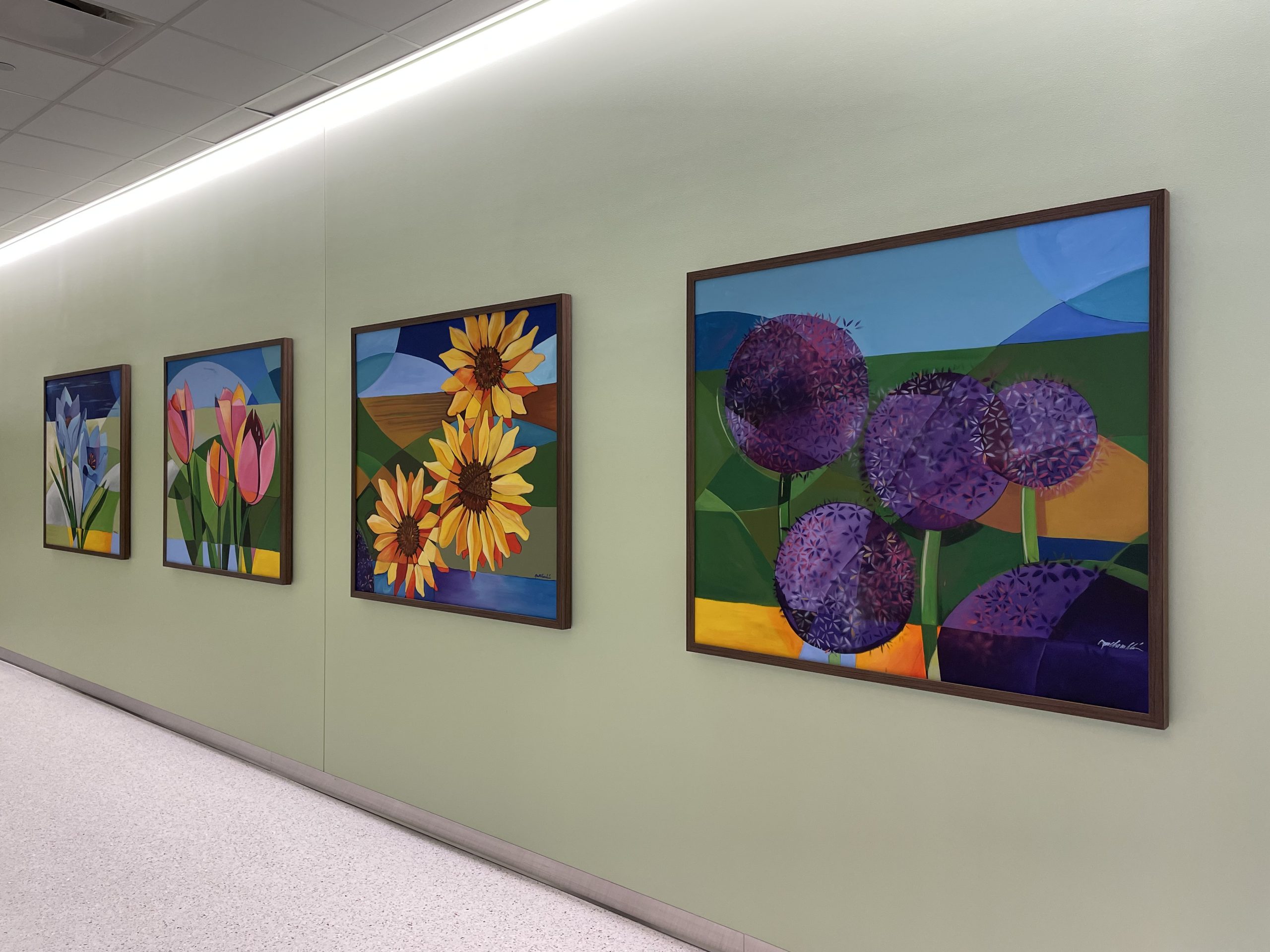 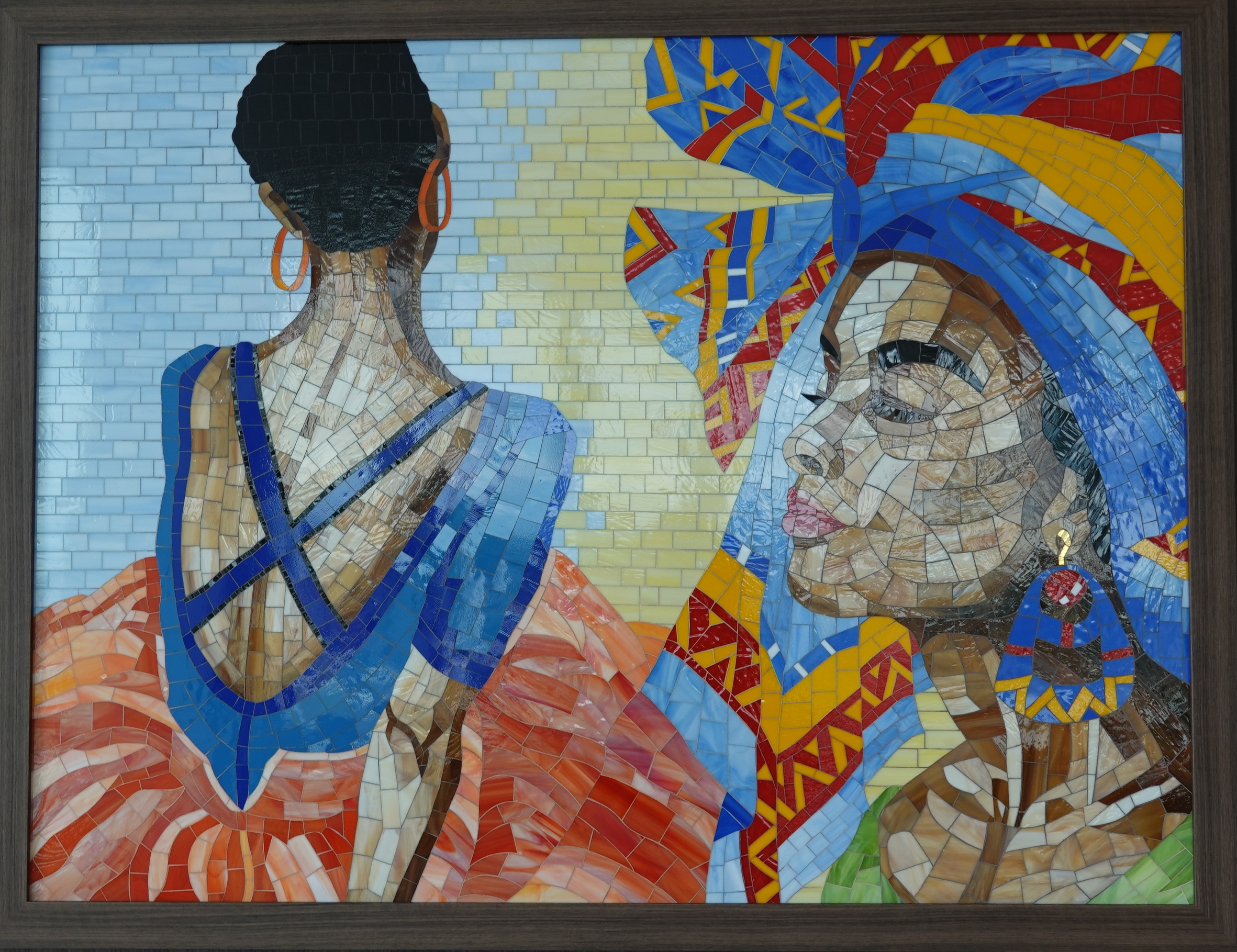 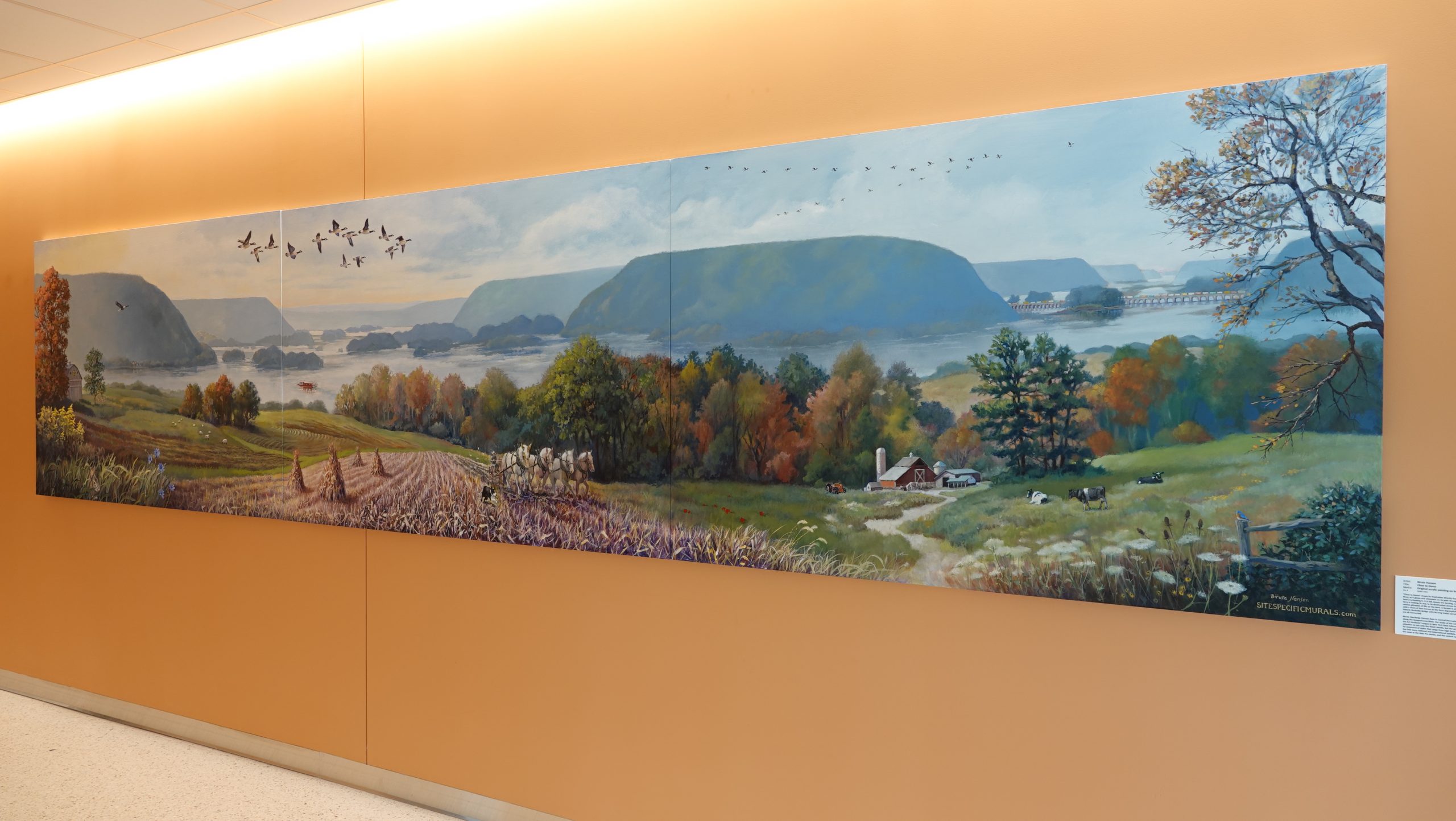 Aesthetics, Inc. installed 394 artworks at Penn State Health’s new hospital in Hampden, Pennsylvania. The art program as a whole represented the work of 173 artists from the region, 30 of whom were awarded site-specific commissions for large, feature artworks. Artists and artworks were selected in concert with the hospital’s new art committee and installed in June, 2001.
Elevator lobby end walls were singled out for floor to ceiling artworks to provide them with identity and to differentiate them from one another. Large walls on each floor were coordinated with the architecture team as area features and prepared for large, multi-panel artworks and murals.
The new art program put special emphasis on seeking out regional artists from traditionally under-represented, multi-cultural groups, in order to reflect the diversity of the surrounding population. This was very successful in helping provide an inclusive, welcoming environment for the ethnically-broad community who will be treated there.

Fundamental to any hospital art program is a goal of helping create a welcoming interior environment supportive of health and healing. As a new hospital opening near an established community, the artwork program was developed with several additional goals. First among them was to help ground the new hospital in the community by providing artwork which visually reflected it, done by artists of their own region. The selected and commissioned artwork reflect both the physical landscapes and the people who live there. A special outreach program attracted many artists from traditionally under-represented cultural groups. The result is a robust display of creativity, both from and about the community the hospital serves.

Aesthetics provided guidance to the hospital for forming and organizing an art committee. One of the goals of hospital leadership was to promote diversity and inclusion throughout the organization, and the art committee themselves were a mix of cultures, ethnicities and backgrounds. In addition to a general call for artists in the region, members of the committee provided outreach to additional artists from traditionally under-represented groups.
The hospital received hundreds of applicants for the art program. Aesthetics worked with the architecture team to identify opportunities for feature artworks, and then with the art committee to select 30 artists for feature commissions in site specific locations. Aesthetics worked with artists to compliment bold interior wall colors in the palates of their original artworks, providing excellent integration of art and architecture.
The art committee helped select 350 additional artworks submitted by regional artists for corridors, patient rooms, exam and treatment spaces. One year from completion, both staff and patients have expressed their enthusiasm and appreciation for the arts program.