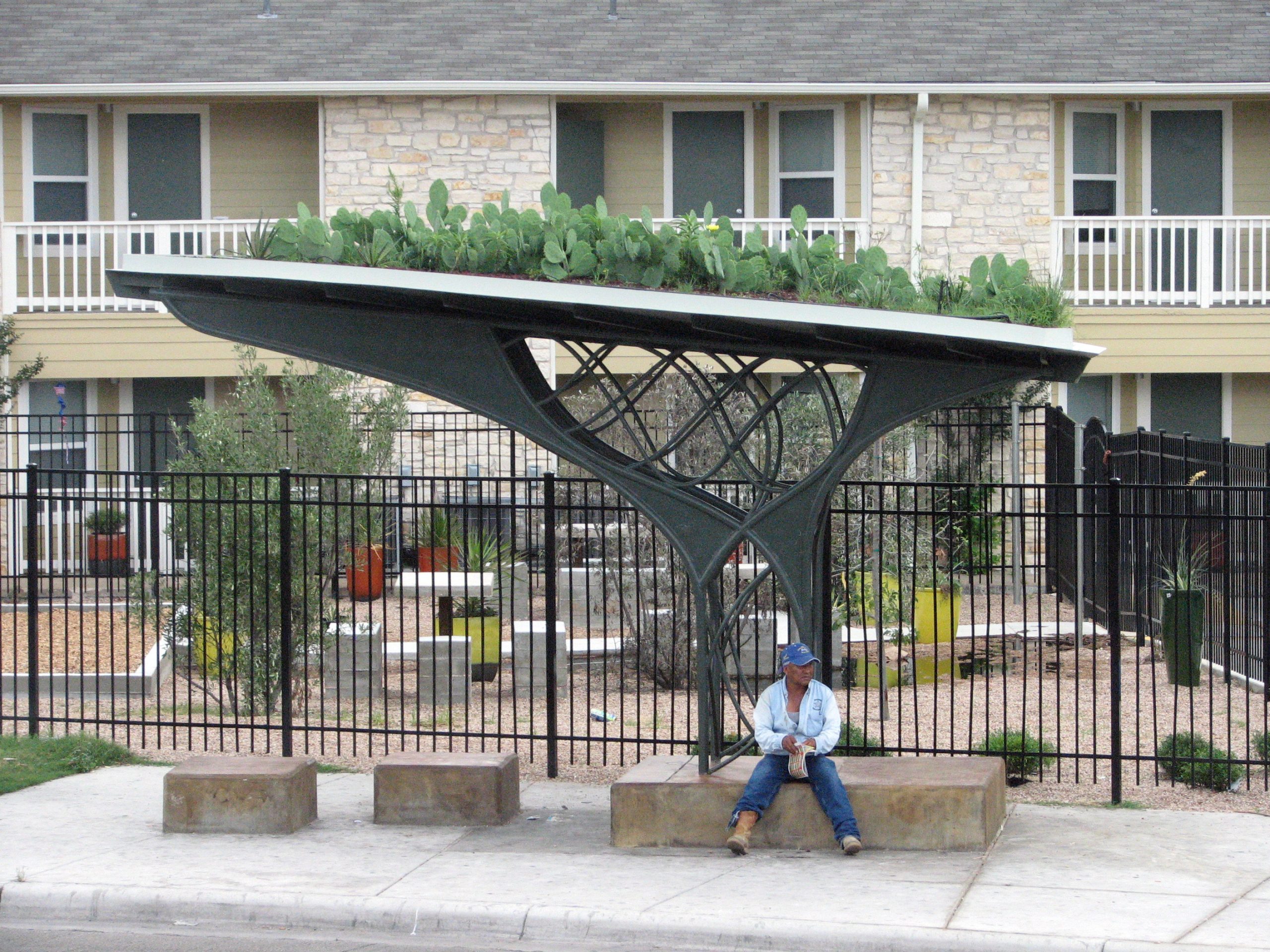 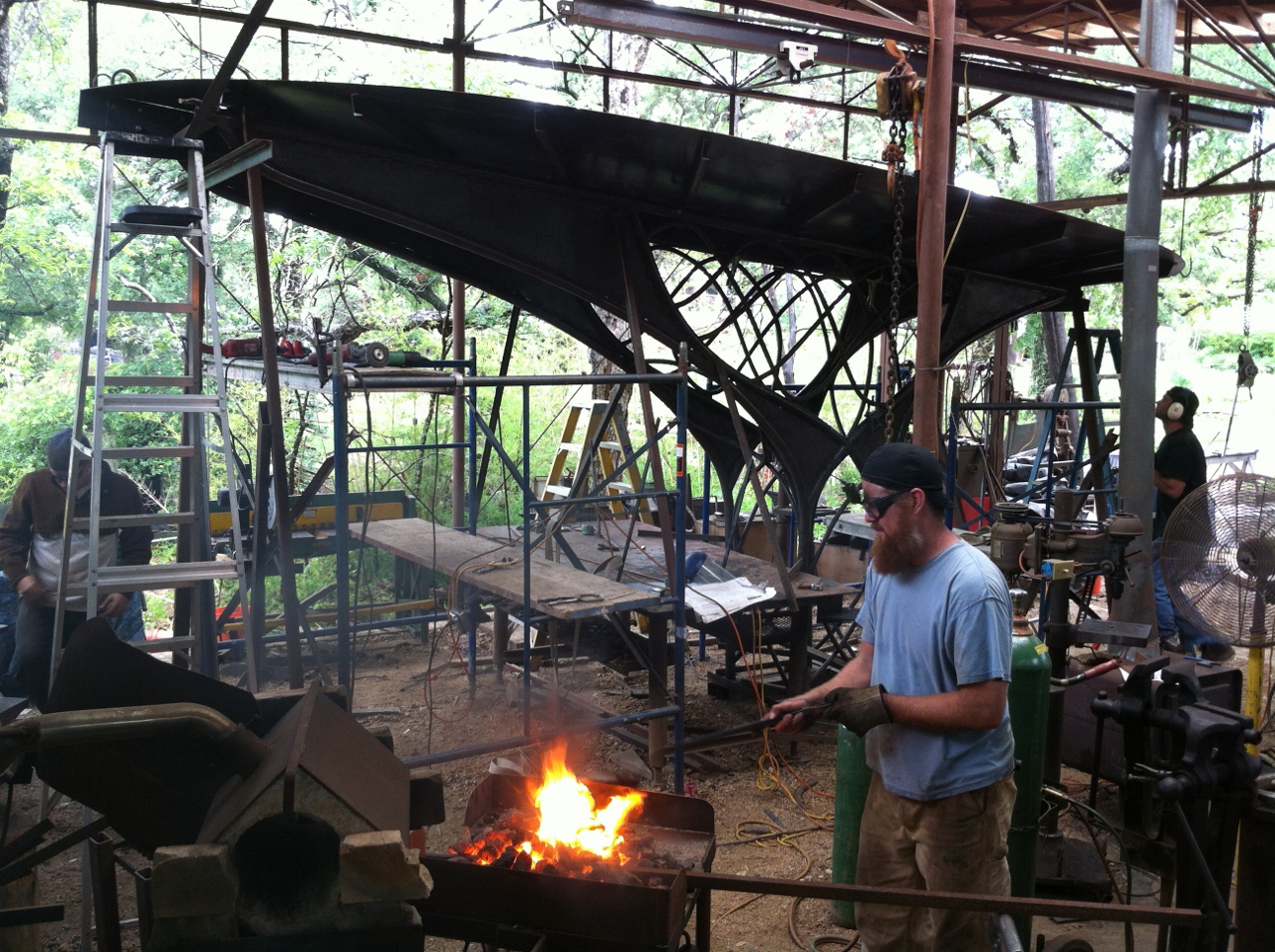 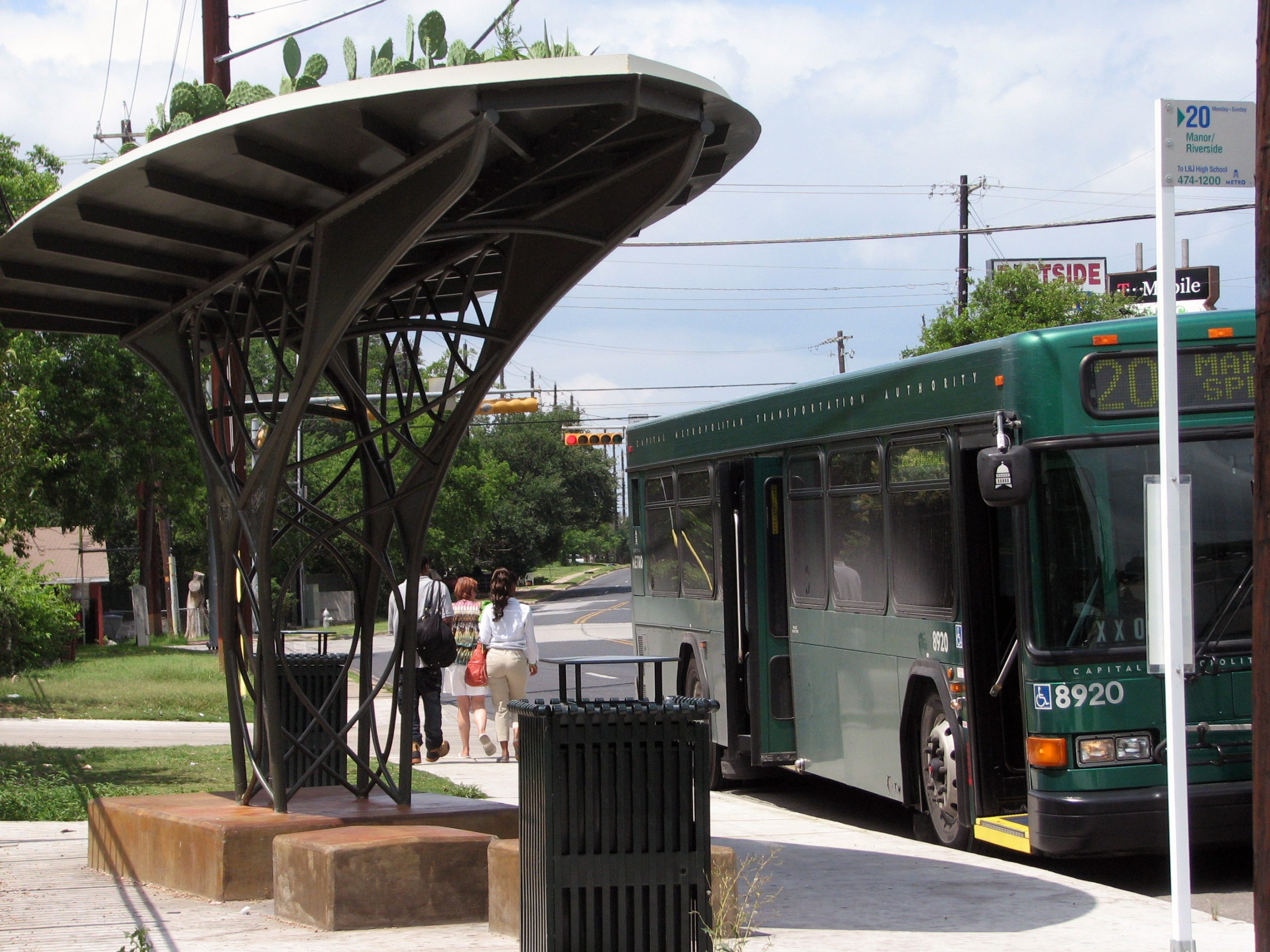 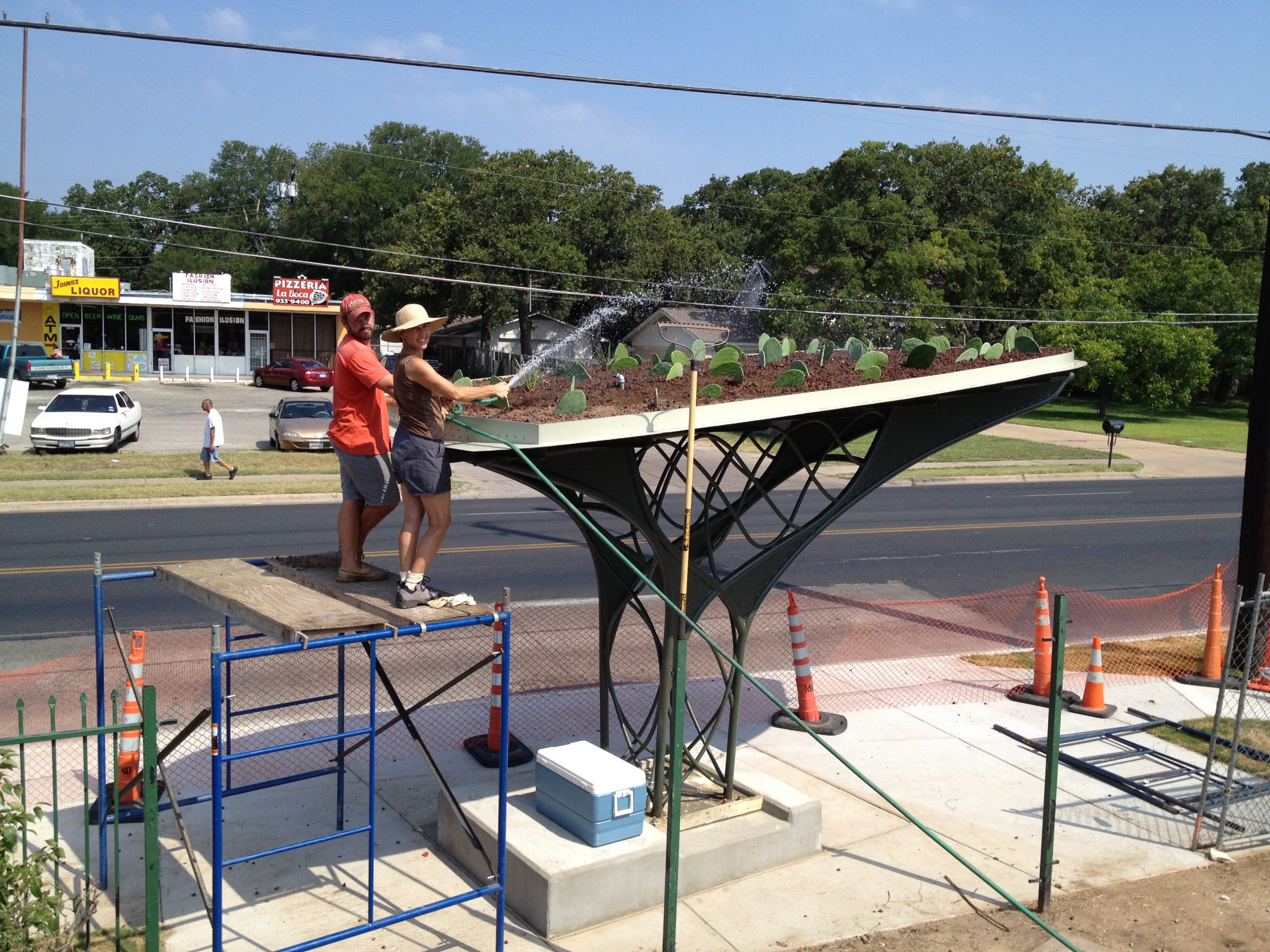 An unusual opportunity to create a resonant piece of functional artwork within the public realm, the Pecan Springs bus shelter came together through the combined vision of multiple key players. What started as a proposal to feature a green (vegetated) roof on a custom-designed bus shelter became an occasion to create a sculptural piece, designed, fabricated, and installed by Stanley Studio, with the input of other team members, from concept to roof planting. Inspired by the canopy of a leaf, the cantilevered structure of forged and welded steel shades three stained concrete seating blocks.

The commissioned piece was intended and conceptualized as a "gateway" element, located at the street edge of an extensive green affordable housing renovation. A visually prominent shelter, it offers shade and seating for bus riders and passersby. As such, it carries multiple functions and purposes, all of which are expressly integrated. The developer-owner and designers were keen to exploit the potential of the shelter, which replaced Capital Metro's standard prototype, as a social focal point that brings together the quotidian (waiting for a bus), the poetic (forged and crafted structure), and the symbolic (special landmark in a low income neighborhood).
The goals of the housing project as a whole, with its emphasis on green building, affordability, and landscaped open spaces, perfectly mesh with the goals for the sculptural shelter, right down to the green roof. The shelter mediates activity between a busy arterial and a small park setting immediately behind it, created from a former chunk of asphalt parking. The goals for creating a place of unique character, with both artistic and environmental attributes, are met.

Architect Lauren Stanley, also a founding member of GRoWERS, a local green roof organization, was approached by non-profit design center ACDDC, interested in distinguishing their proposed bus shelter with a vegetated roof. From this seed, a multi-stakeholder collaborative process evolved which included Austin's Capitol Metro, green affordable housing developer Green Doors, GRoWERS, ACDDC (Austin Community Design and Development Center), Lars and Lauren Stanley of Stanley Studio, and structural engineer Stephanie Tsen, PE.
Early meetings established the genuine interest of a large municipal agency (Cap Metro) in realizing, and partially funding, a one-off bus shelter that ultimately took on more of an 'art in public places' flavor. Green Doors agreed to match these funds to create something special and help see the project through. Efficiencies and quality control in the final piece were possible through the phased, design-build efforts of Stanley Studio, experienced as architects and metal artists. Tsen, the engineer, played a key part in finessing the physical form, as the designers responded to structural requirements. The efforts of GRoWERS and other volunteers designed and strategized the Austin-appropriate roof planting and temporary irrigation.

This project was an inspired effort of several people committed to realizing a piece that had to negotiate many variables over a 2-3 year process. The result has been highly rewarding and elicited an enthusiastic reception through the city, for its collaborative process as well as for its aesthetic and social impact. It has generated some momentum to explore similar opportunities throughout Austin in the future.