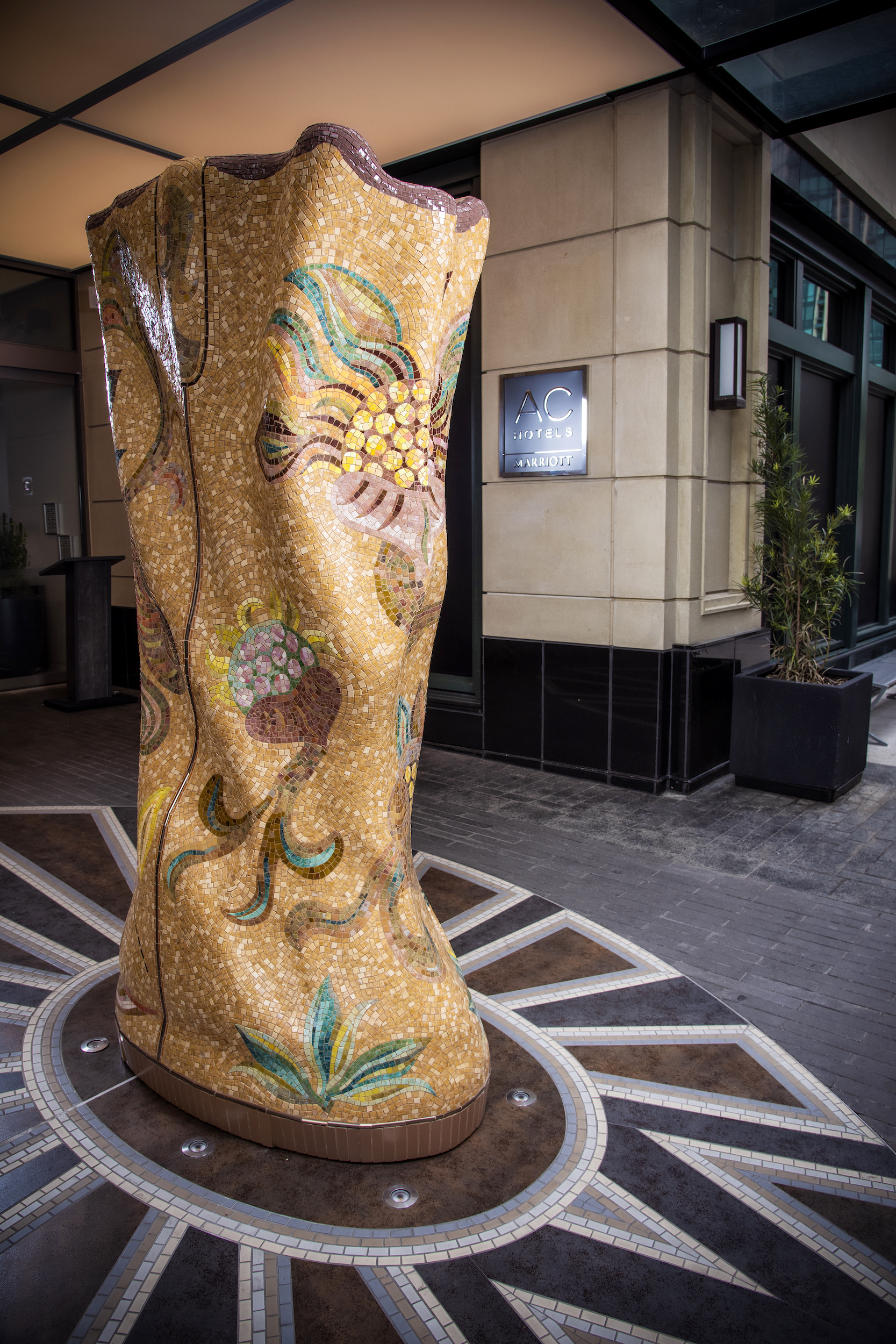 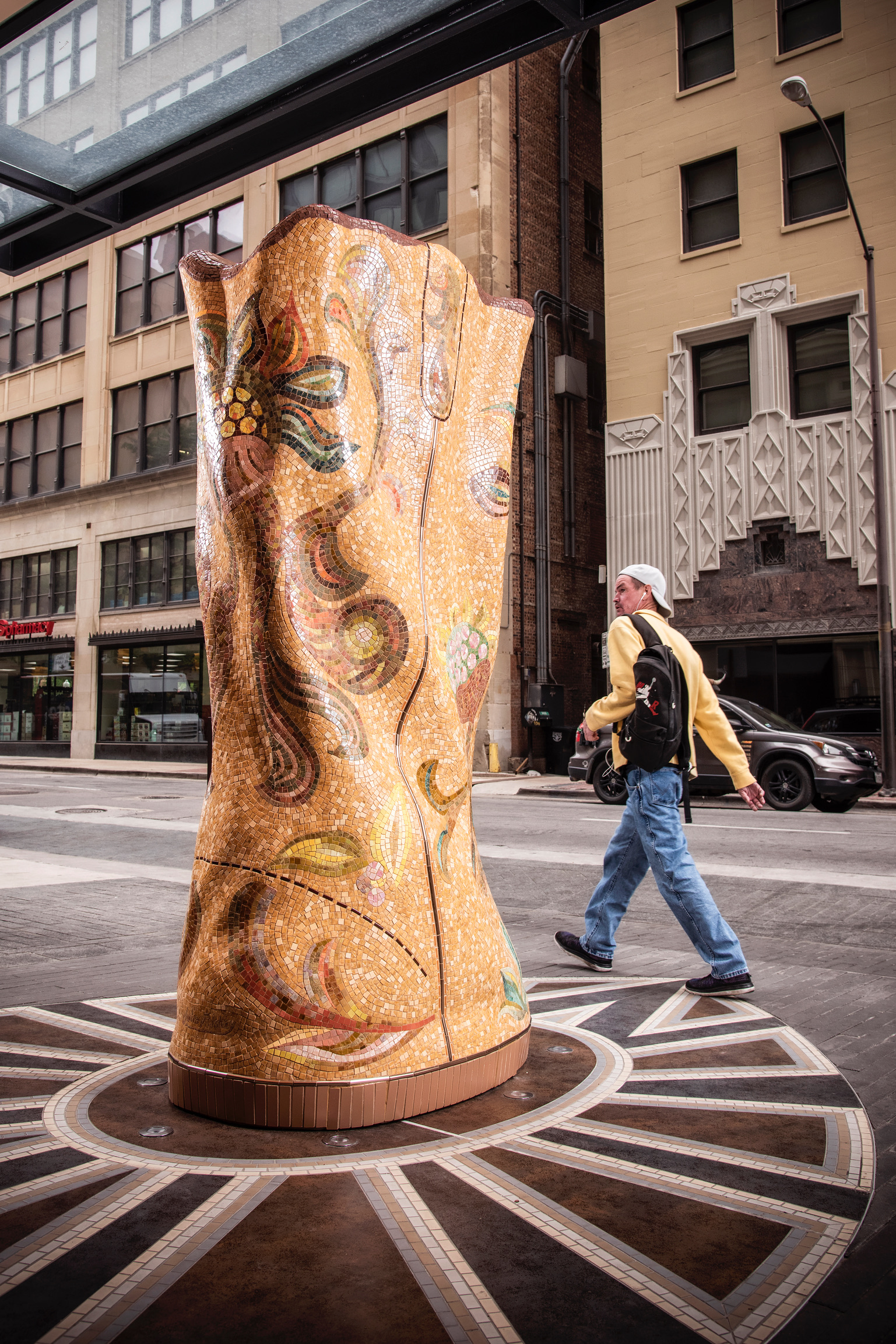 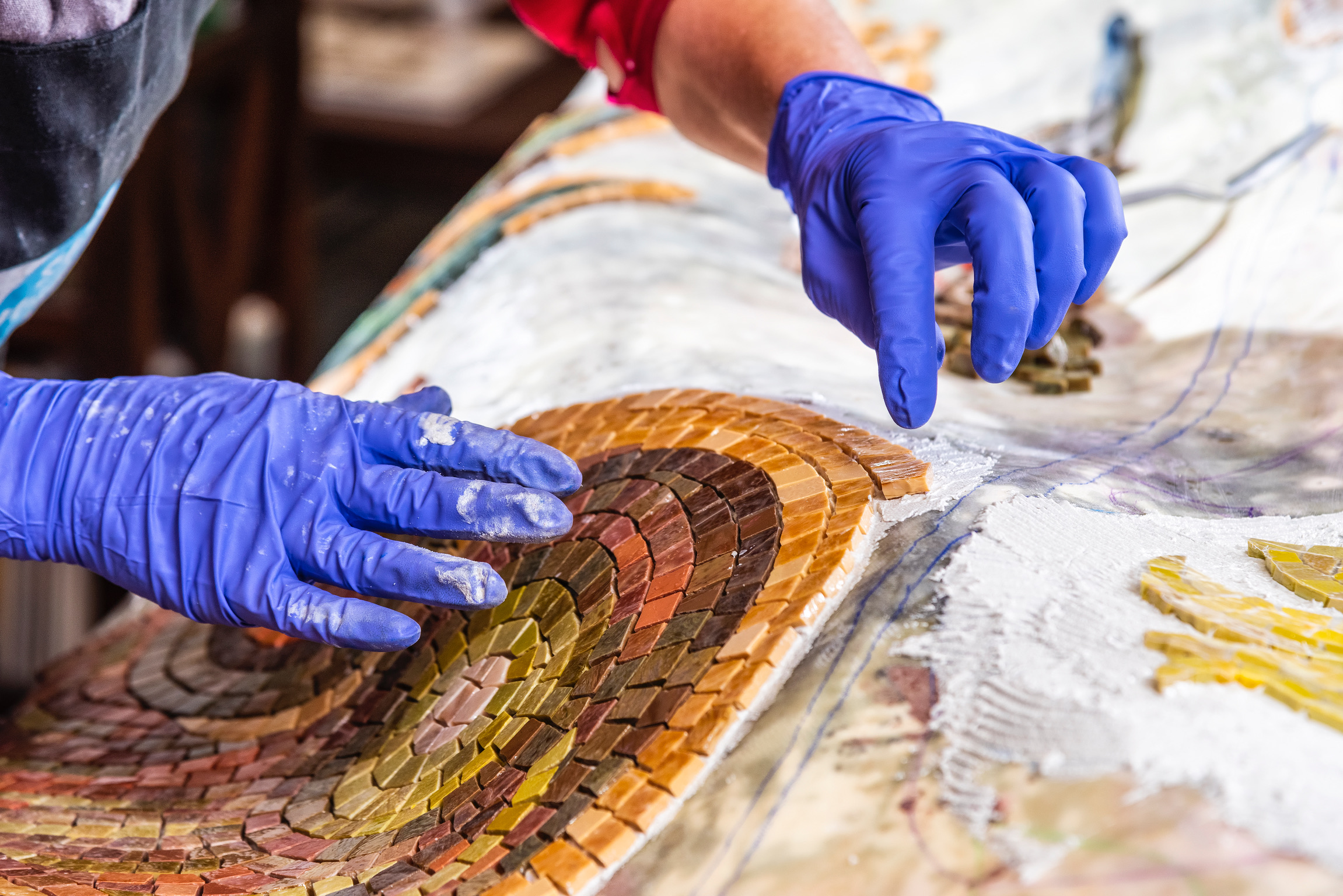 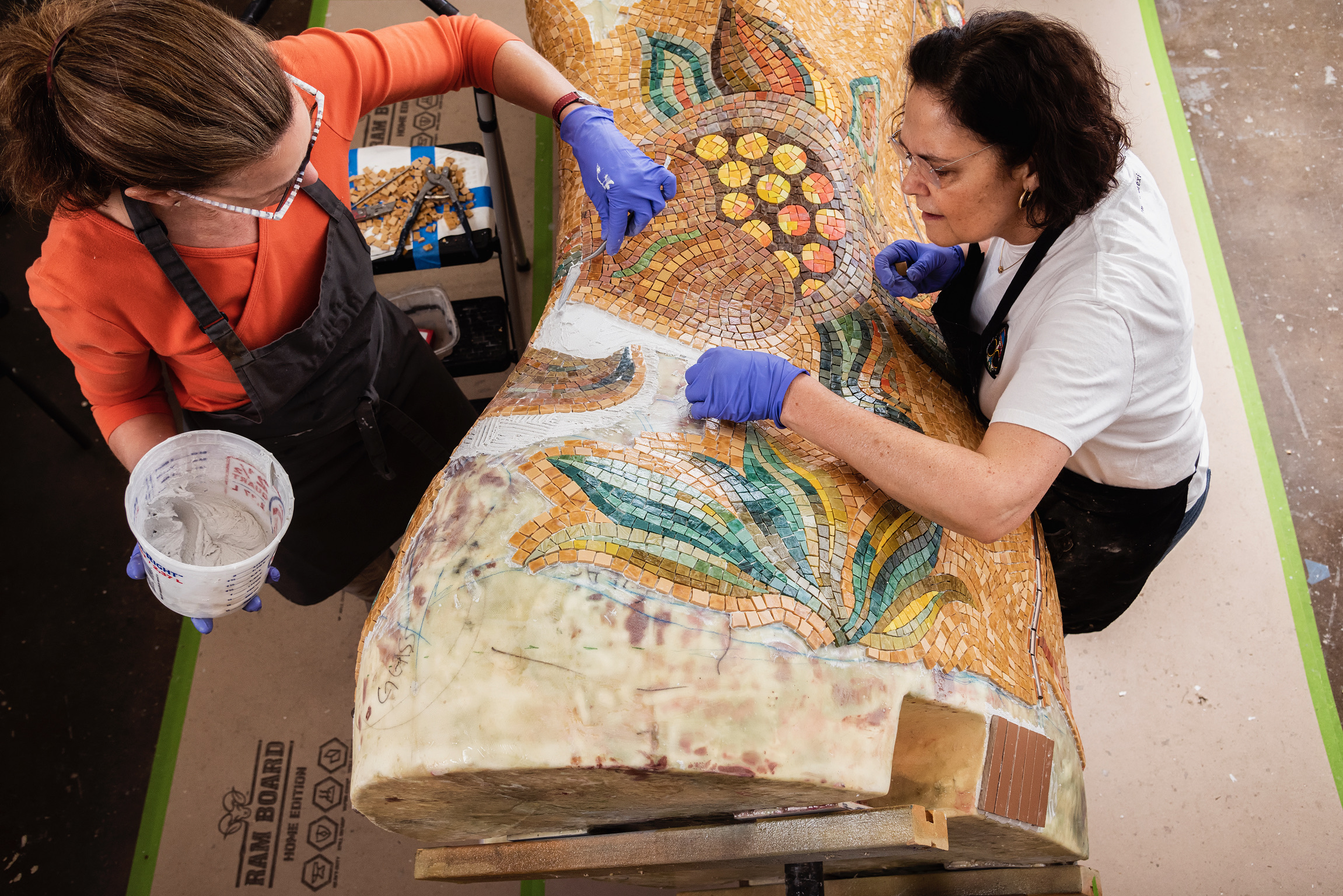 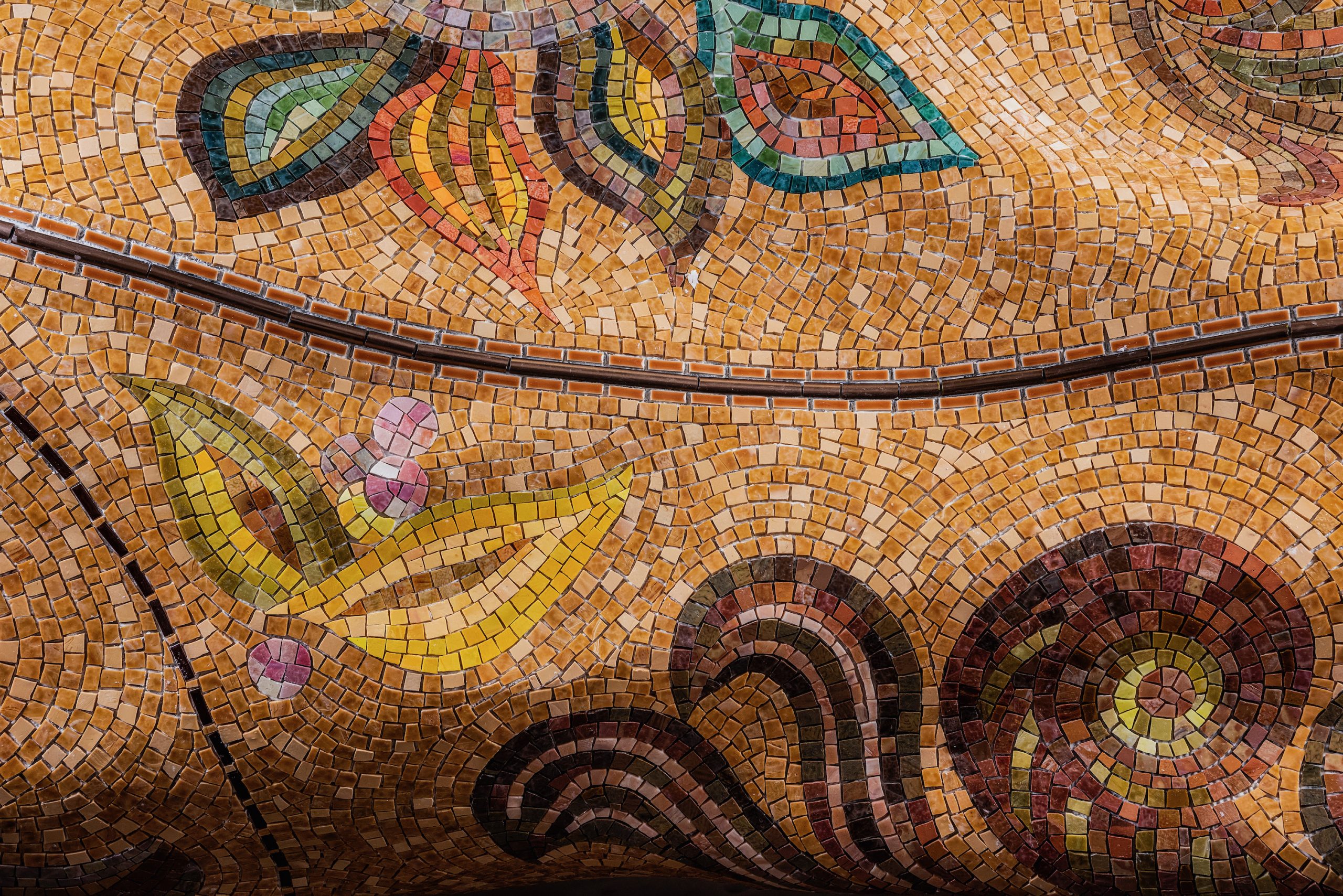 City of Fort Worth, TX

Jackson Shaw selected accomplished mosaic designer Julie Richey, owner of Julie Richey Mosaics, to design and fabricate the first impression before entering the hotel, an elaborate mosaic entryway featuring a column sculpture and pavement. The sculpture is a steel armature and fiberglass-clad column covered in mosaic smalti. The shape alludes to a Spanish pollaina, or gaitor, a chap worn by riders. The form is organic and “slouchy,” giving the surface an undulating appearance.

Jackson Shaw’s main request was that the artistic feature would exude a ‘contemporary design with a Western flair,’ which would also complement the ambiance of the hotel’s interior. Inspired by local boot maker, M.L. Leddy, located in the historic Fort Worth Stockyards, Richey planned to incorporate the boot maker's design aesthetic into the sculpture and pavement mosaics. The clients also requested a design acknowledging the Antonio Catalan roots of the AC Marriott flag, so Richey chose design inspiration from the tooled leather "roses" found in some of ML Leddy's most intricate custom leather saddles and boots.

Richey was short-listed from among pre-qualified artists from the Fort Worth Public Art Program. Working with FWPA Director, Jackson Shaw staff, Austin Industries supervisors and foremen, as well as a bespoke lighting designer, Richey took in all of the site's specific parameters and requirements before designing a maquette and floor pattern. Despite 2020 pandemic challenges, the team met on site multiple times to verify the scale and size of the sculpture and pavement, even creating a full-size printed pattern of the floor and a scaled template of the sculpture. The project had two phases: the pavement, which is a boot stitch pattern outlining solid, waterjet-cut slabs of Neolith porcelain, and the column, an 8-foot-tall fiberglass form clad in mosaic tiles. In total, the project would encompass more than 200 pounds of glass mosaics in 35 different colors. A small maquette was sculpted and brought to Blue Genie, who rendered the model using CAD and CNC routers. Richey visited Blue Genie to carve final touches in the foam structure before it was clad in fiberglass. 7 weeks of mosaic pattern application followed, using a 3-part Laticrete epoxy. Blue Genie then returned to Richey's studio to move and install the column in the hotel entry.

The mosaic glass for the column was traditional smalti from Mosaicos Venecianos de México in Cuernavaca, so traditional thin-set mortar wouldn’t be compatible with a fiberglass substrate. Plus, the undulating surface of the substrate meant the designs could not be fabricated in one continuous piece but in separate elements. Exterior Conditions: With the boot stitch pavement sitting at the exterior entry and near the valet stand, materials had to be weather-resistant and suitable for heavy pedestrian traffic, as well as pulled luggage. Since the column also had to be weatherproof, it was constructed of high-density styrofoam, then layered in fiberglass around a steel armature before mosaic tile could be installed. Before the armature could be bolted into the pavement, it was certified by engineers and approved by the city's building inspection department.