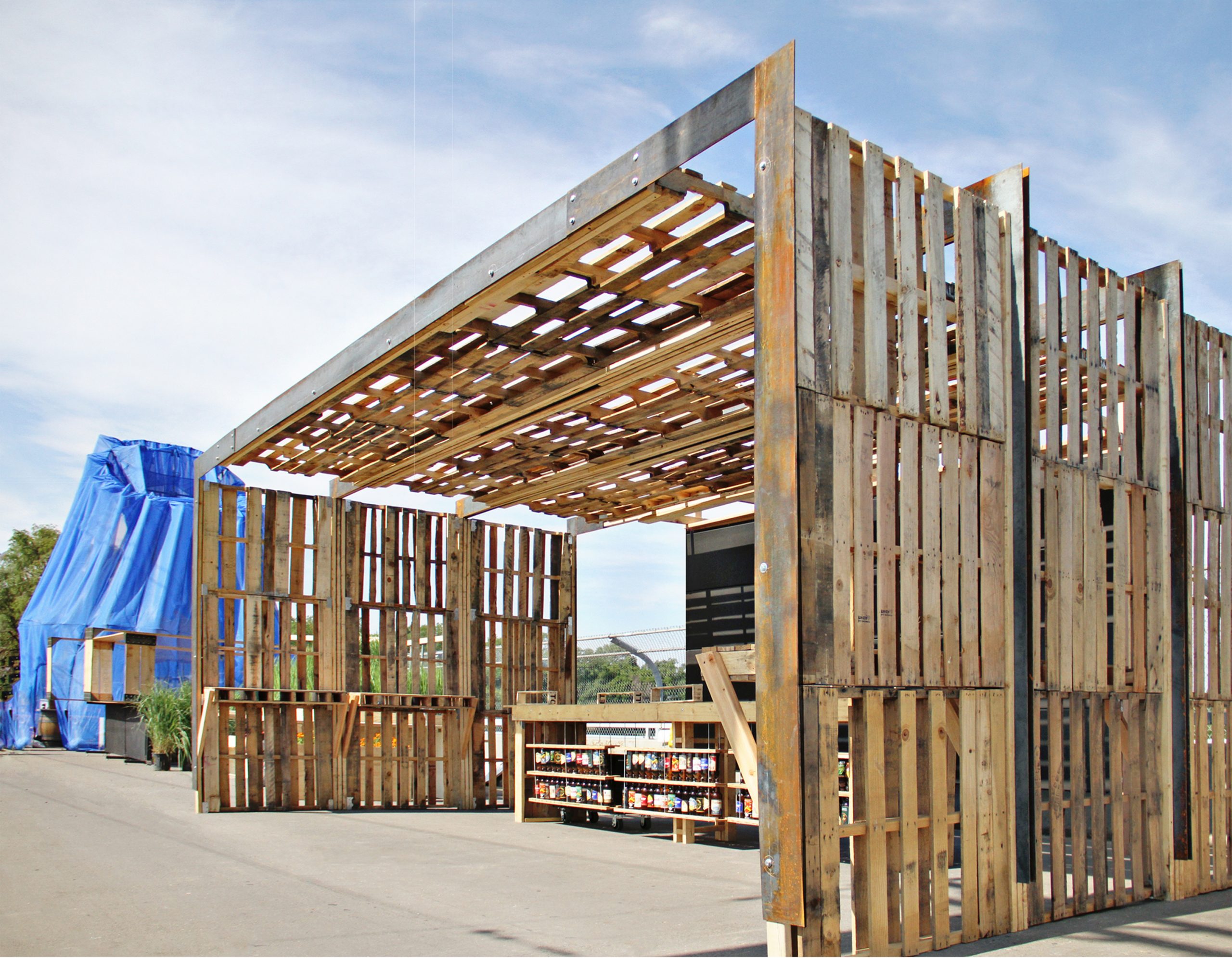 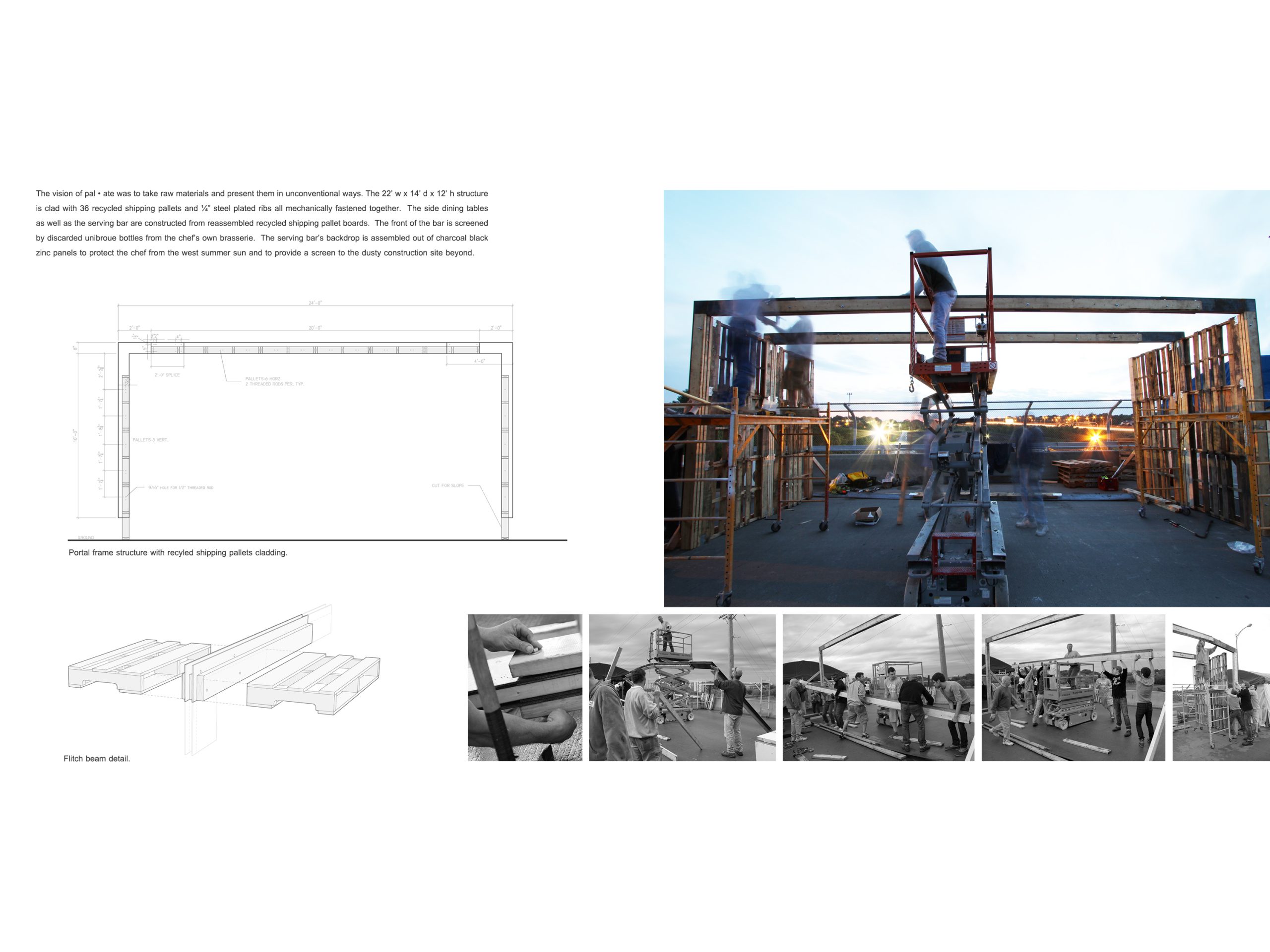 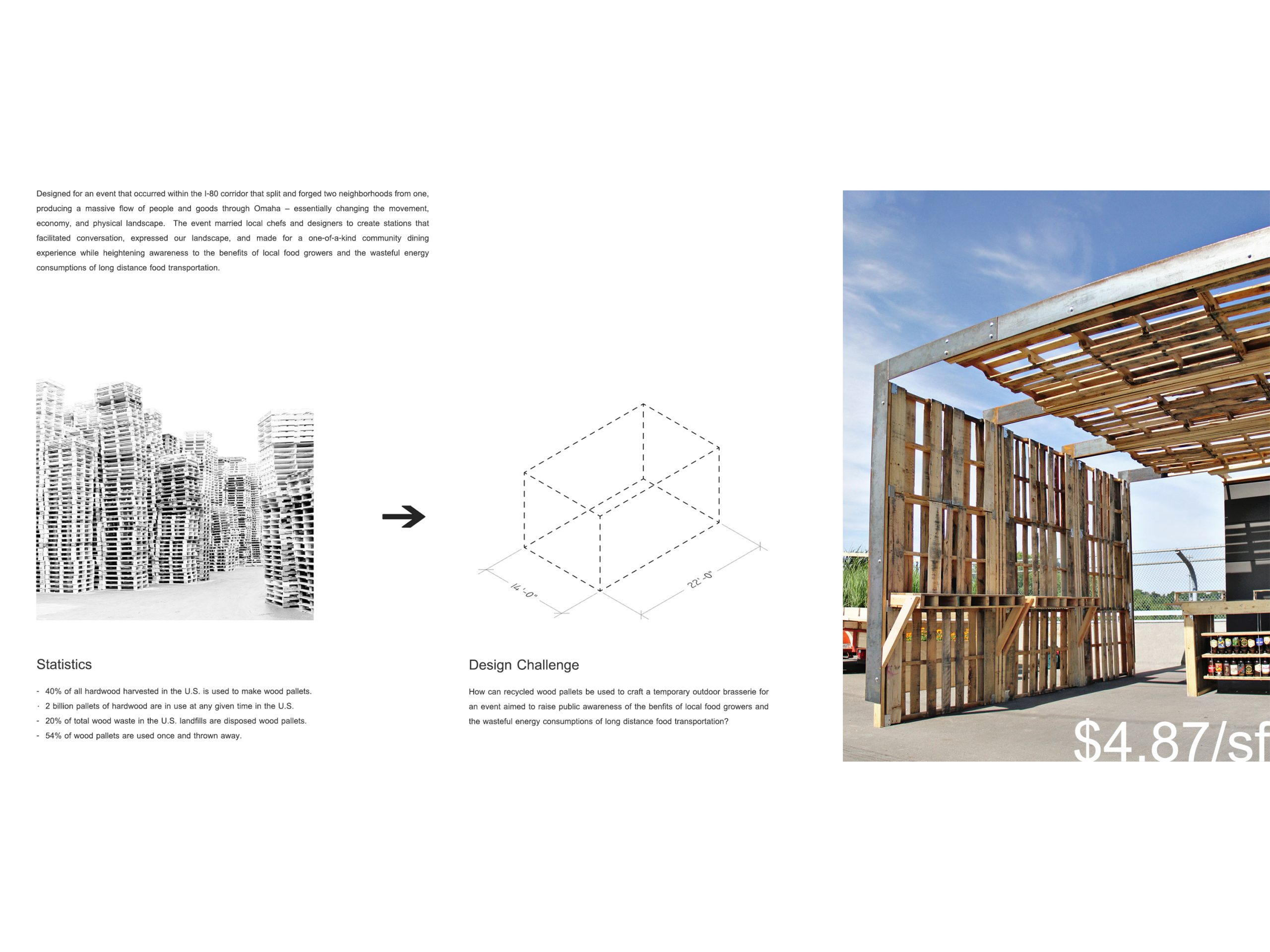 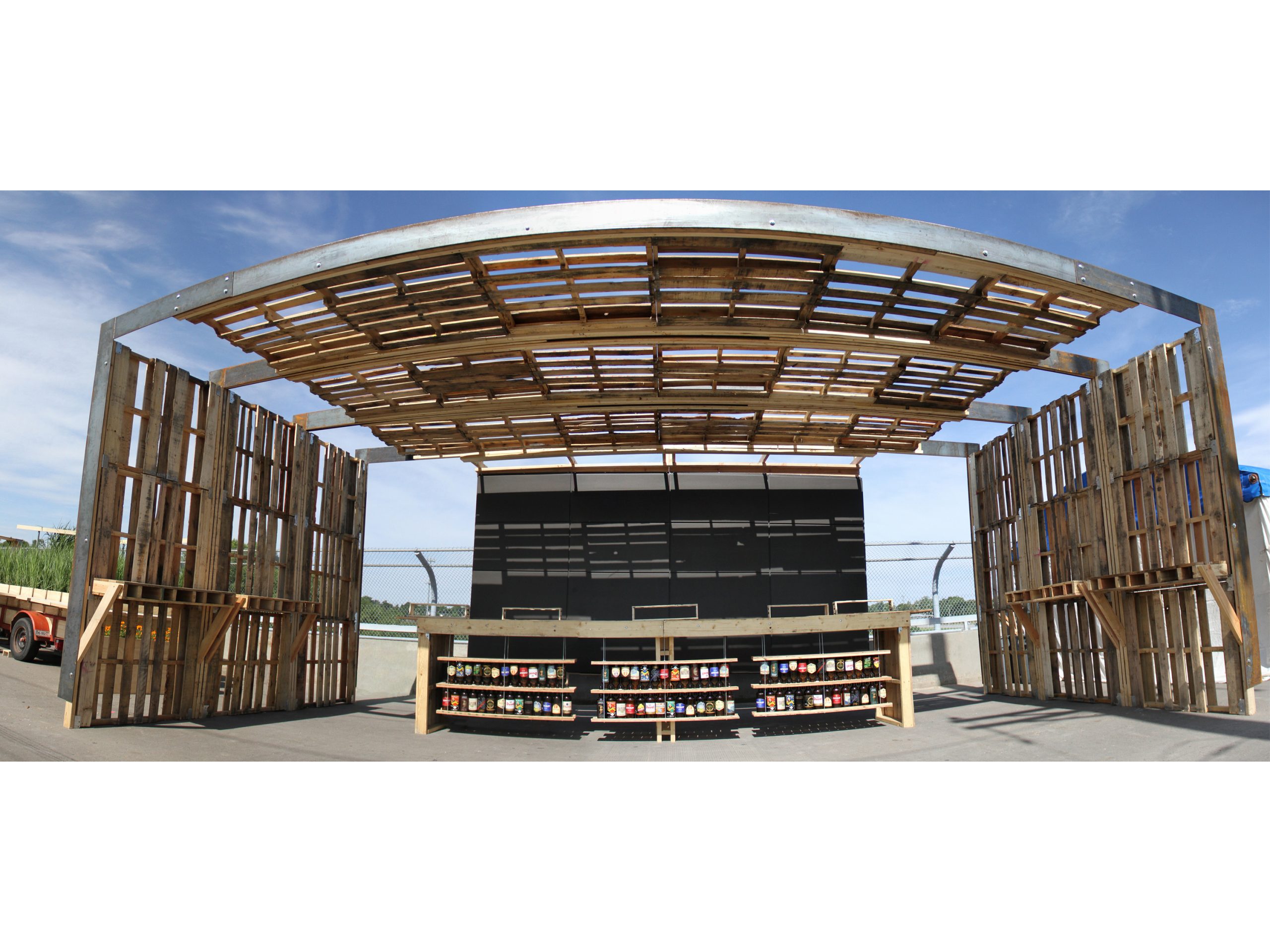 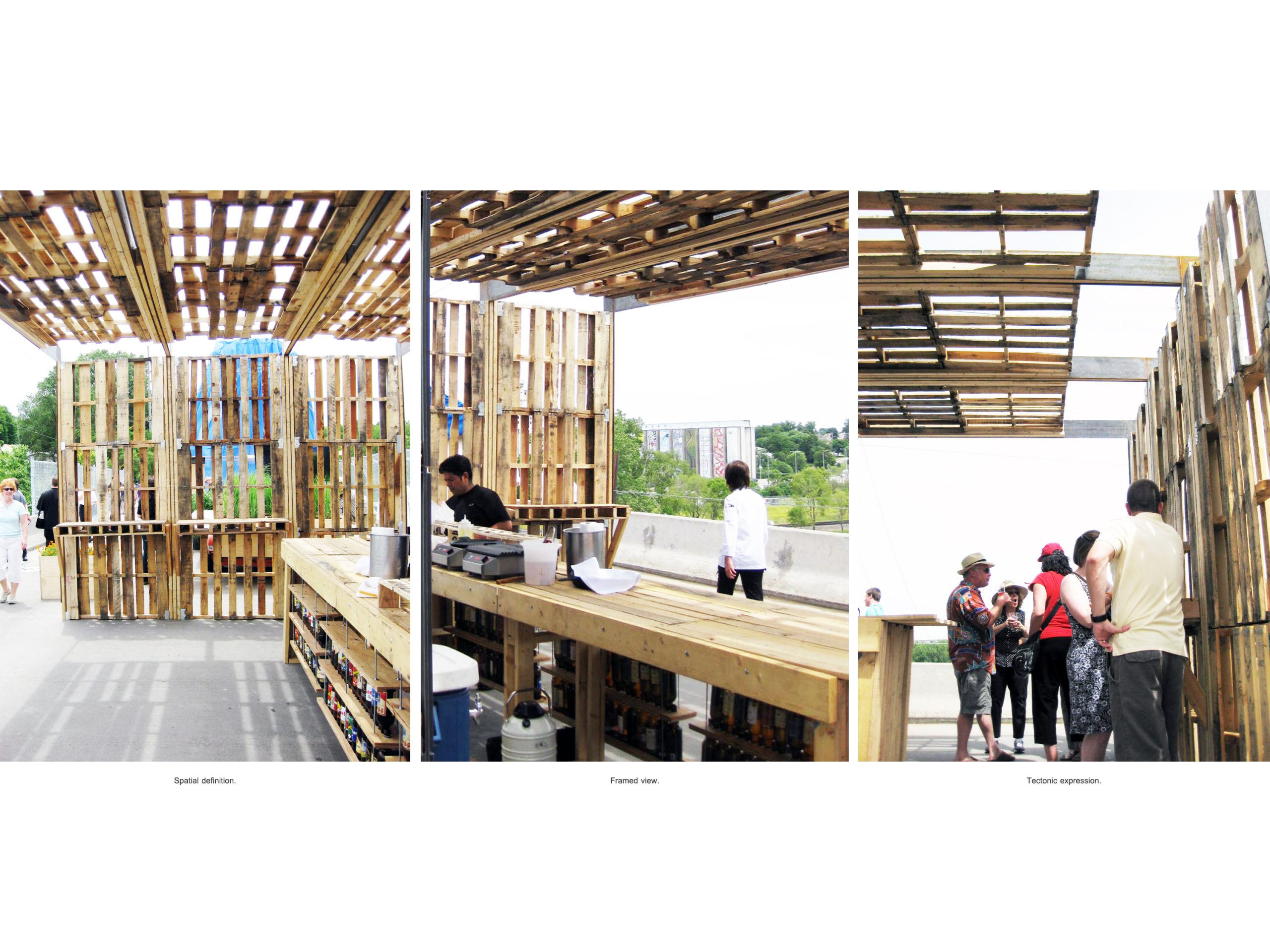 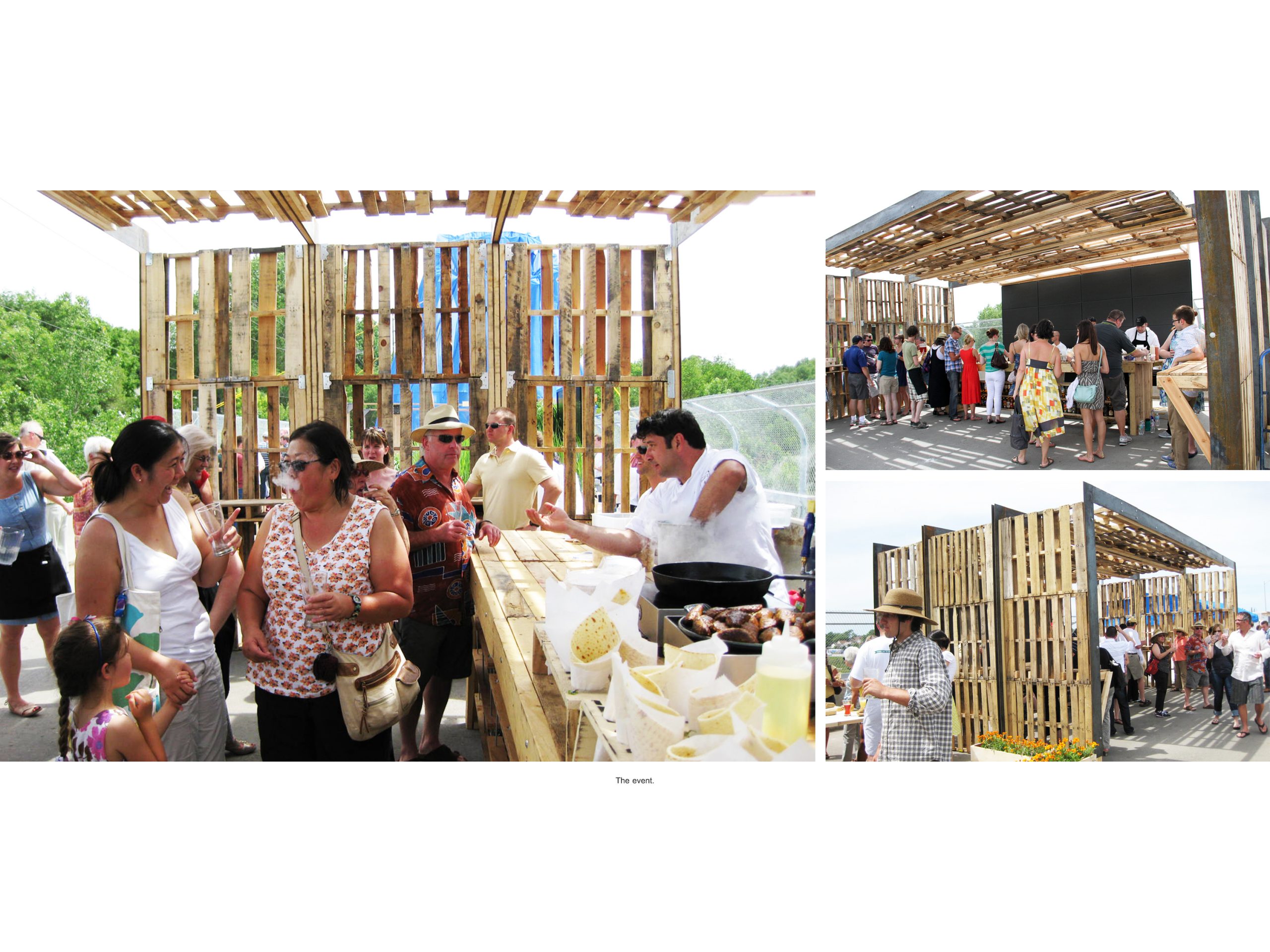 The pal • ate pavilion at the elevATE event in Omaha, Nebraska was an exercise in exhibiting the power of the detail in shaping architectural space, where steel and recycled pallets were the main components. The conventional materials were reorganized unconventionally by connecting the pallets to either side of a flitch beam, allowing the pallets to clear span the entire volume of space used for a unique dining event. The main bar and side tables were constructed from modified pallets; the front of the bar was screened with discarded Belgian Ale bottles which were reclaimed from the chef's own brasserie.

The pal • ate pavilion was designed and built as a part of a large-scale, site-specific community event that set out to accelerate the momentum across disciplinary boundaries; with the focus of land use, food, agriculture, and transportation. The event took place on a bridge over the Interstate 80 corridor in Omaha, Nebraska; an aggregation of concrete yards, rail corridors, unused lots, and in between spaces, this corridor comprises an extensive amount of Omaha’s landscape. pal • ate was one of nineteen unique “Elevation Stations” lining the bridge and served as one of the only structures providing shade for this summer event. The result was an unprecedented collaboration between artists, designers, architects and chefs.

The uniqueness of the collaboration for the pal • ate team was that the boundaries between artist and designers/architects were blurred for much of the design and construction process. At the beginning the team met with the chef at his brasserie where he loosely set out his goals. The design team worked collaboratively on ideas, sketching, and studying various ideas. While departed, the team would independently be thinking about solutions, trying to find the big idea that everyone could get excited about. The team would reconvene, layout the ideas and collaboratively and rapidly go through them finding all the flaws. The idea came from the question of how best to maximize readily available materials that could be donated. This was a true cross-disciplinary event where artists took the role of designers/architects and architects took the role as artists.