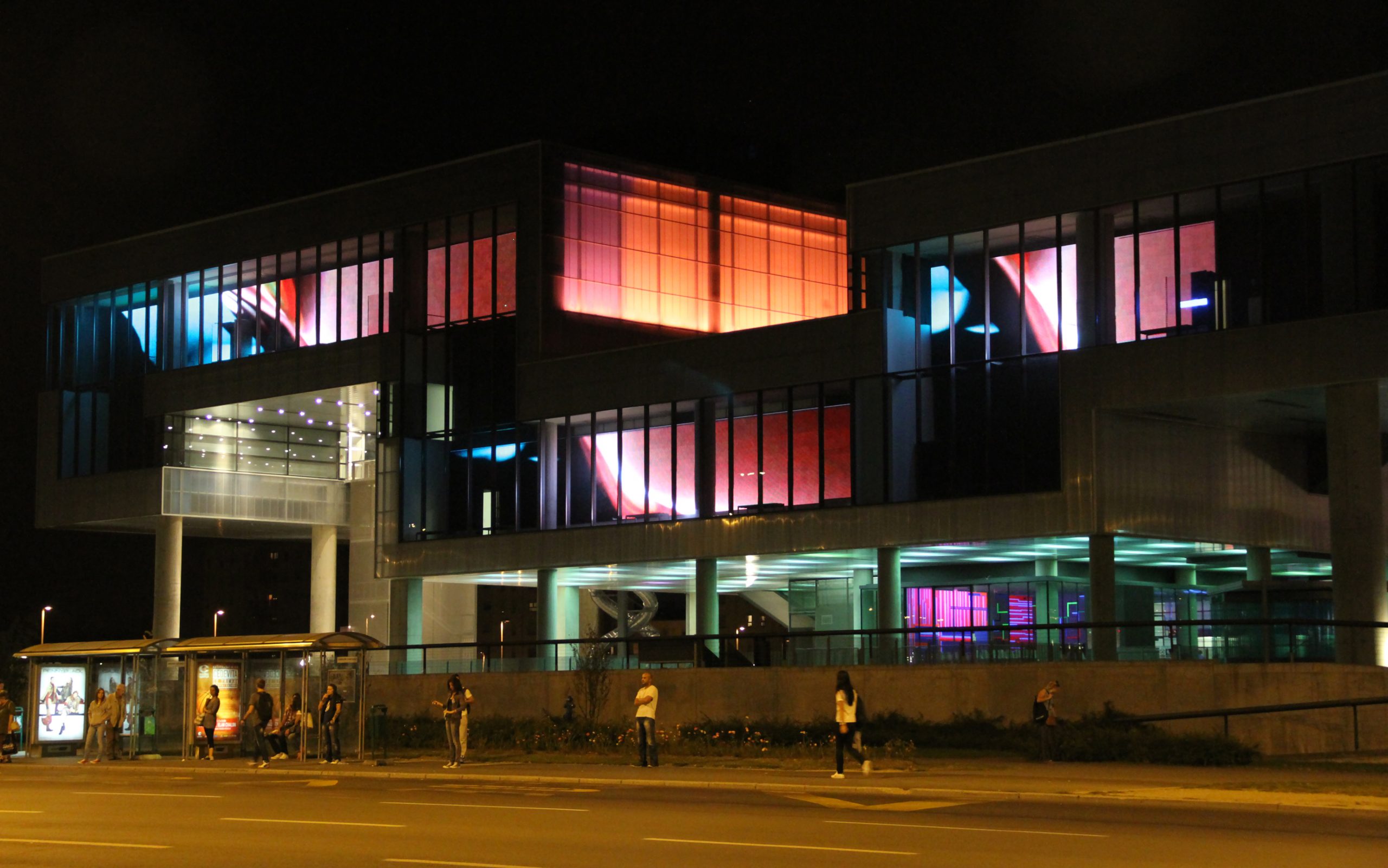 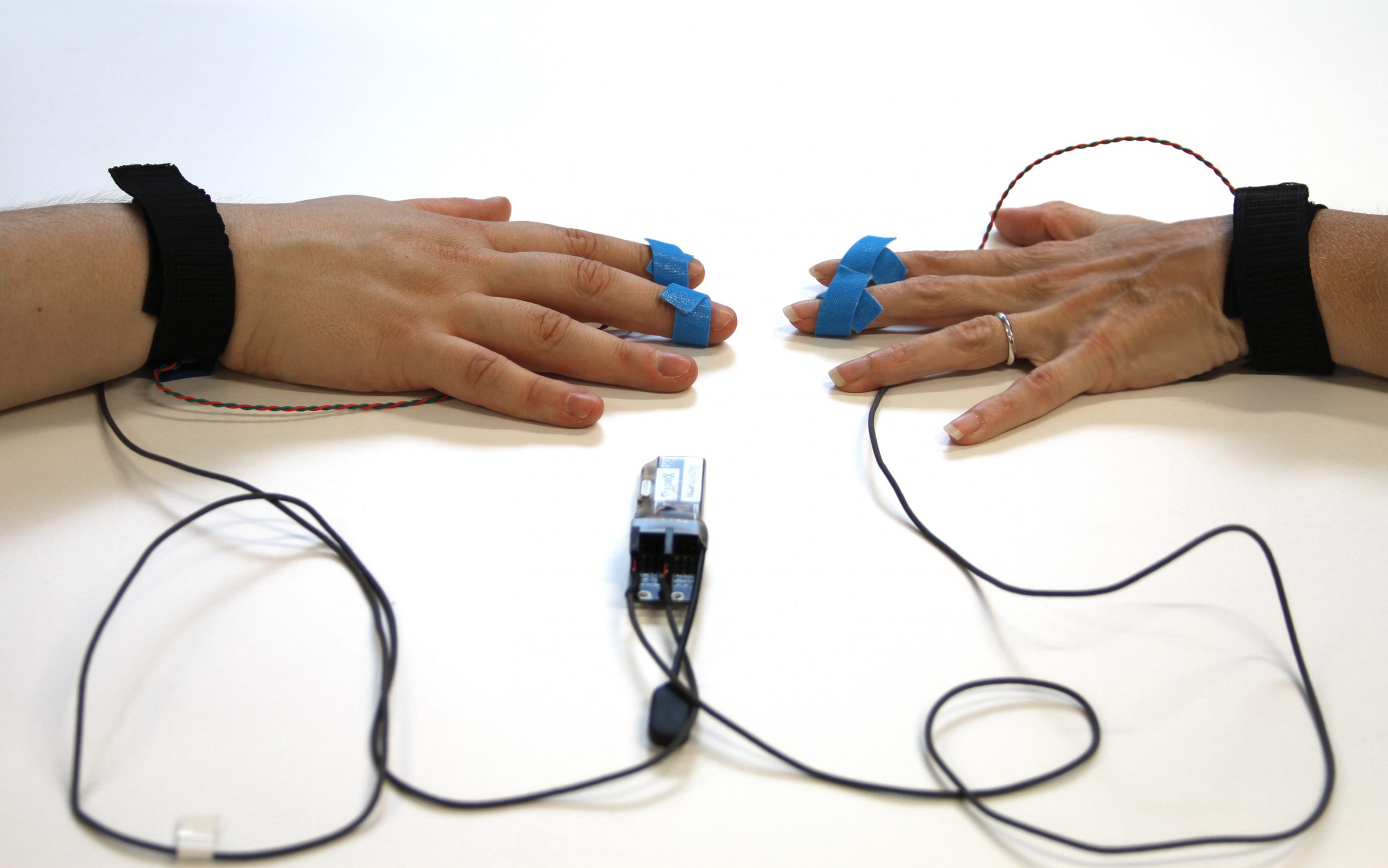 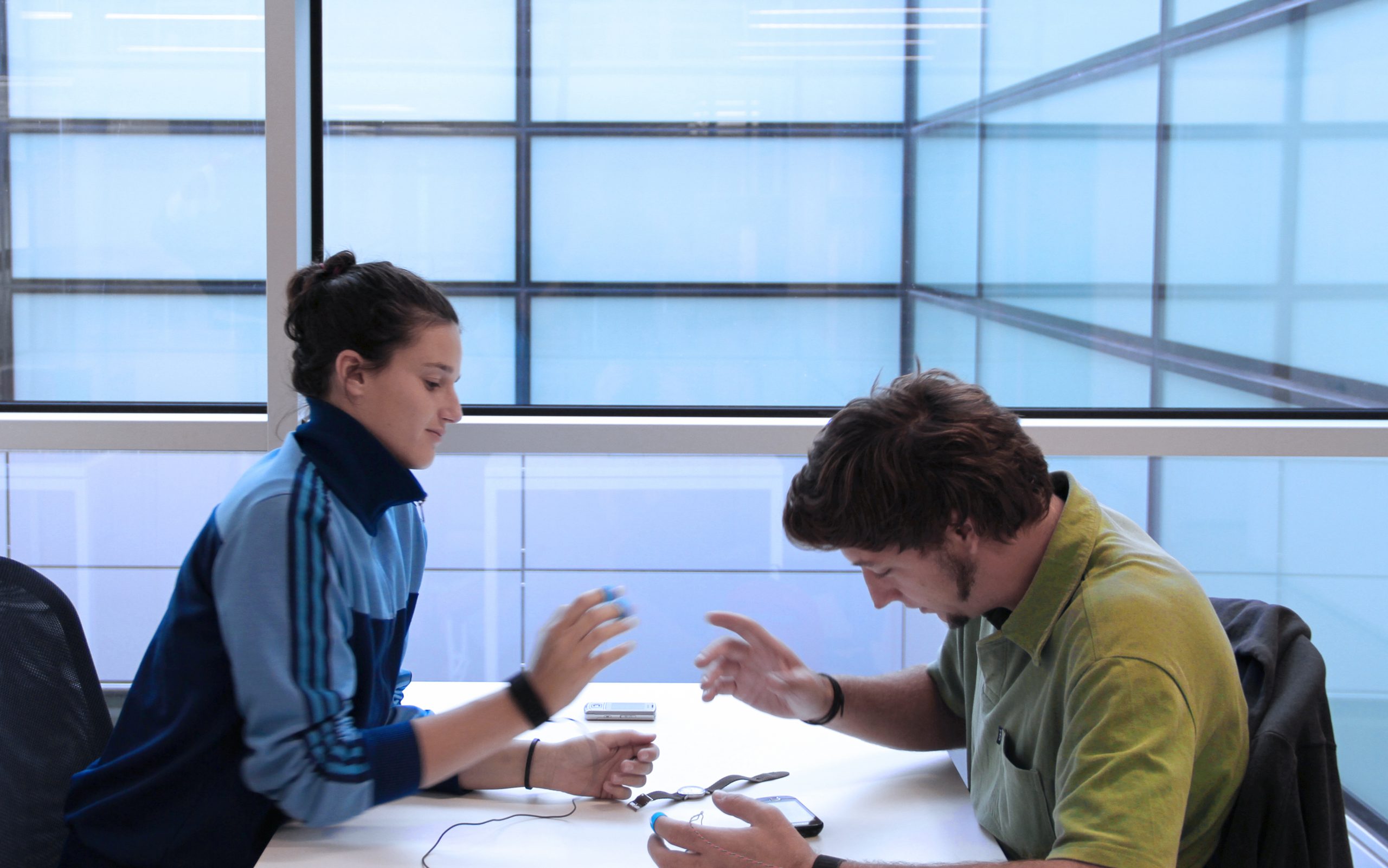 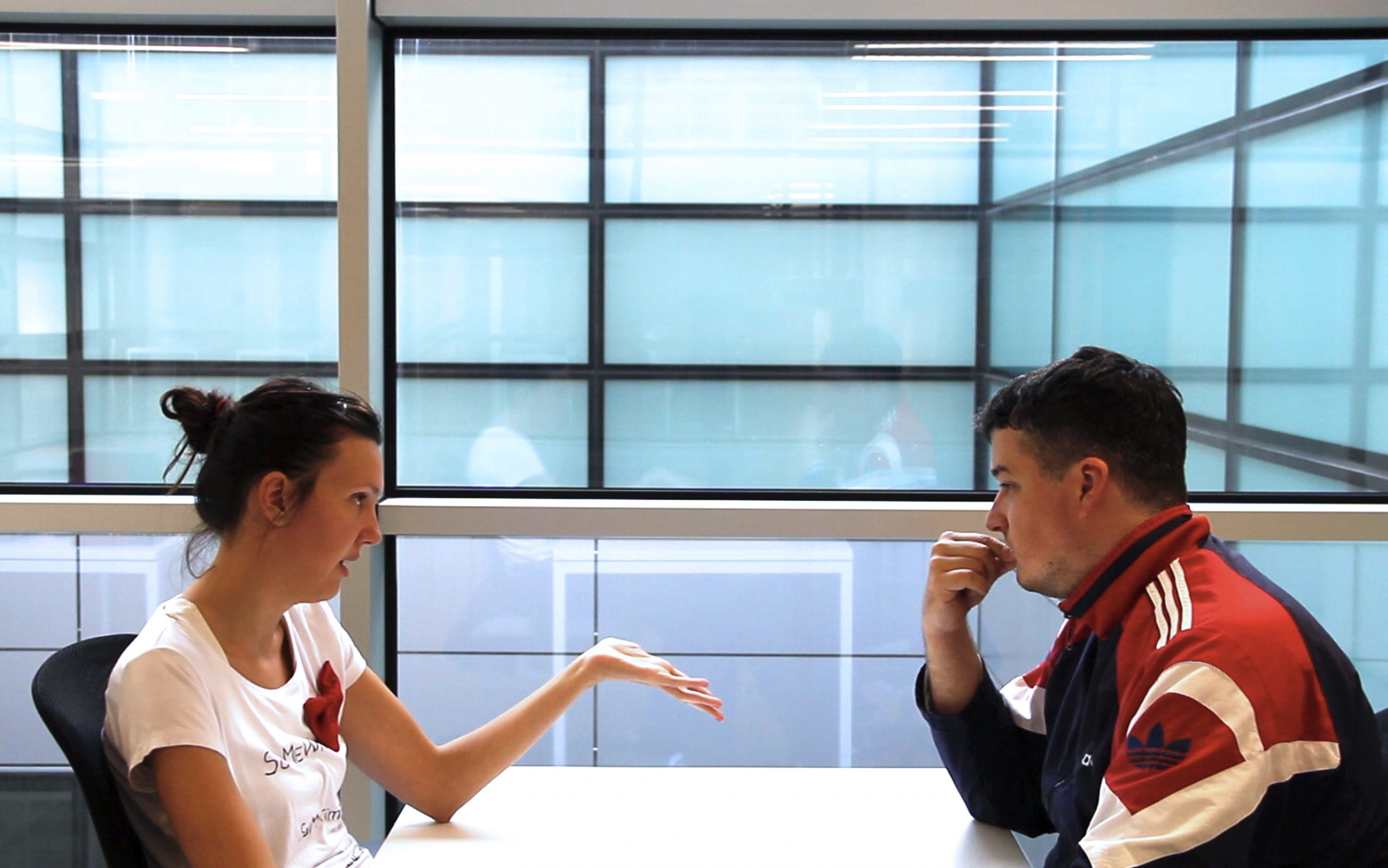 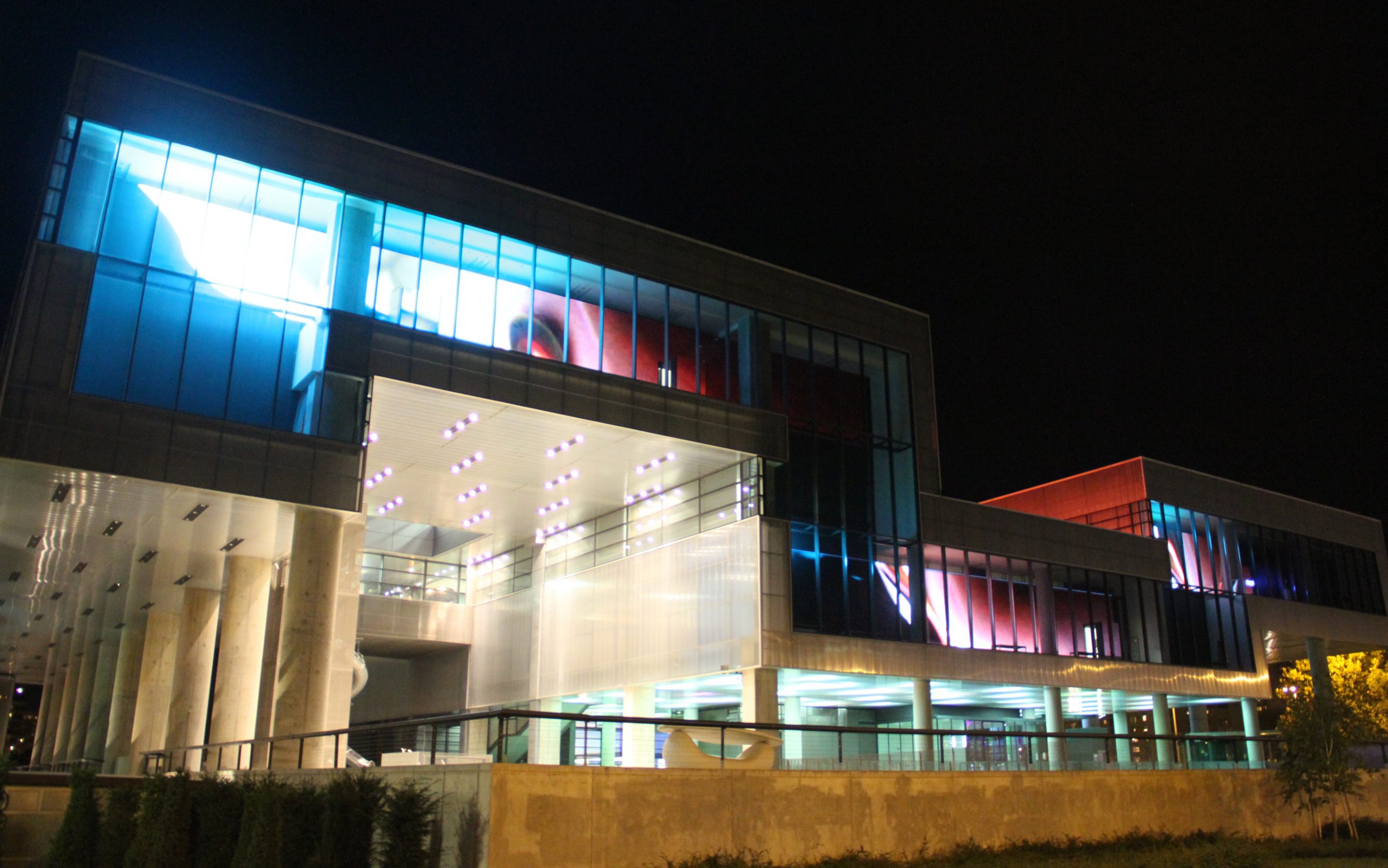 Opposing Views presented the visualization of conflict and debate through biofeedback, sensor driven, real time video programming.
How ideologies and emotions interrelate was examined within the context of conflict, with an emphasis on how the ideologies of the few impact the many. The construct of conflict took shape in the form of public debate, between two citizen participants of opposing views. Biofeedback sensors created data based on their emotional fluctuations and translated that impact into real-time video distortions.
The project was presented on the 400-foot media architectural facade of the Museum of Contemporary Art Zagreb.

Commissioned through the International Symposium on Electronic Arts (ISEA) Istanbul 2011 and the Museum of Contemporary Art Zagreb, the goal of Opposing Views was to provide a dynamic spatial dialog between site, power structures and the examination of public debate to present new avenues of communicative infrastructures.

The custom integration of the work spanned the three-story LED facade system and engaged a major pedestrian and transit corridor of the City of Zagreb in dialog with the museum as interior and exterior civic space.

The artist team coordinated closely with the Museum of Contemporary Art, Zagreb and ISEA Istanbul media arts curators to integrate the custom software system into the existing architectural facade. Participants were identified through the curatorial staff and their civic associations. Each group of volunteers selected their own topics of debate, ranging from the role of the museum within gentrification, urban planning and cultural destination development goals to the significance of photography in national identity structures. All debate sessions were recorded and later translated as part of the archival process.

The Dislocations Program was published by Leonardo Electronic Almanac. Examining the complexities of contemporary cultural tensions, the project identified with literary dialogues framed by the editors of e-Flux Journal, Julieta Aranda, Brian Kuan Wood, and Anton Vidokle through the investigation of "two sides of a single, irreconcilable anxiety with regard to cultural tradition, the promises of modernism, and the shortcomings of both. From this singular vantage point, we can perhaps discern something like a primary limit; which can also be a raw material; guiding our very ability to produce, or even reflect, culture today."