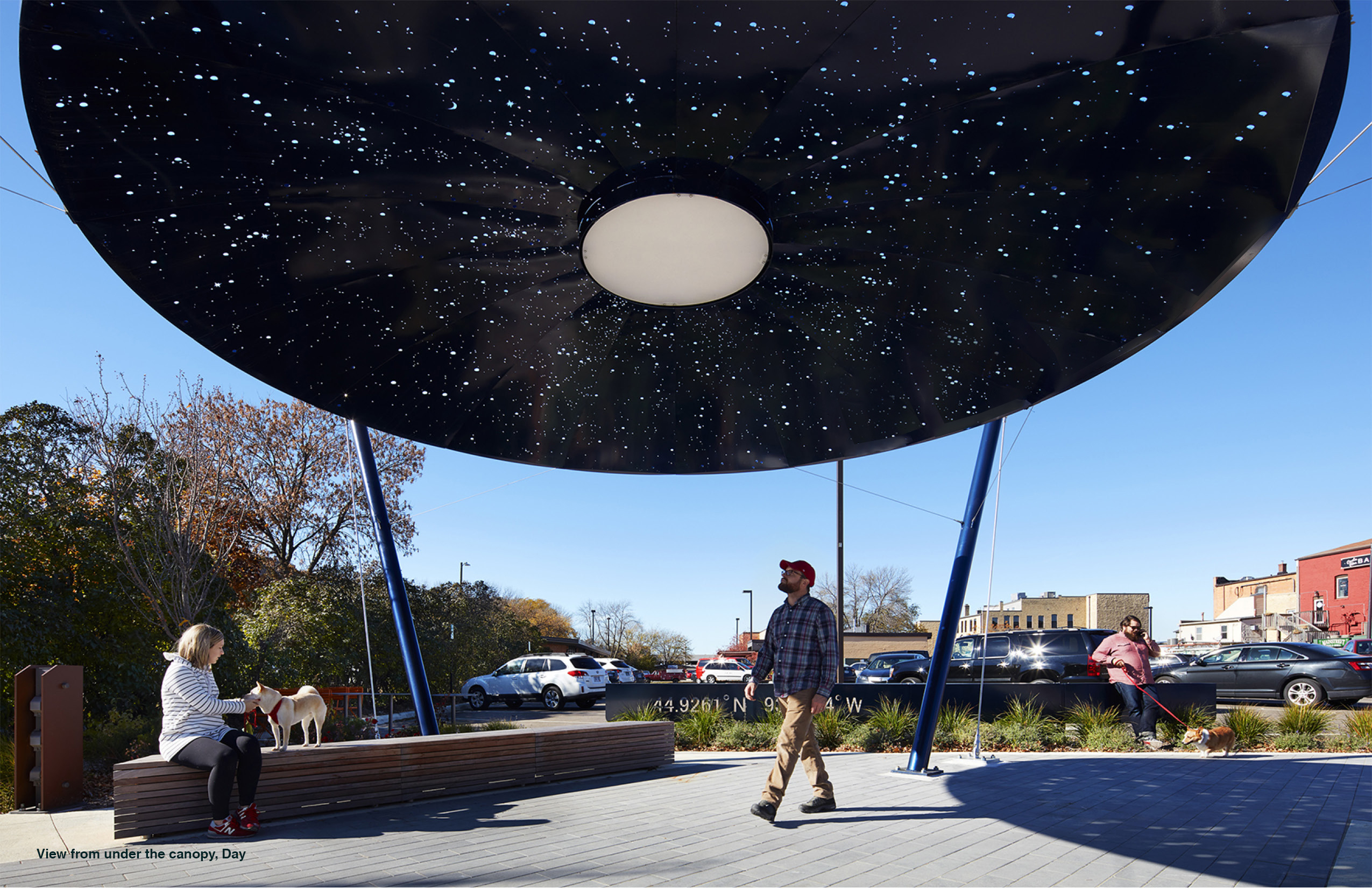 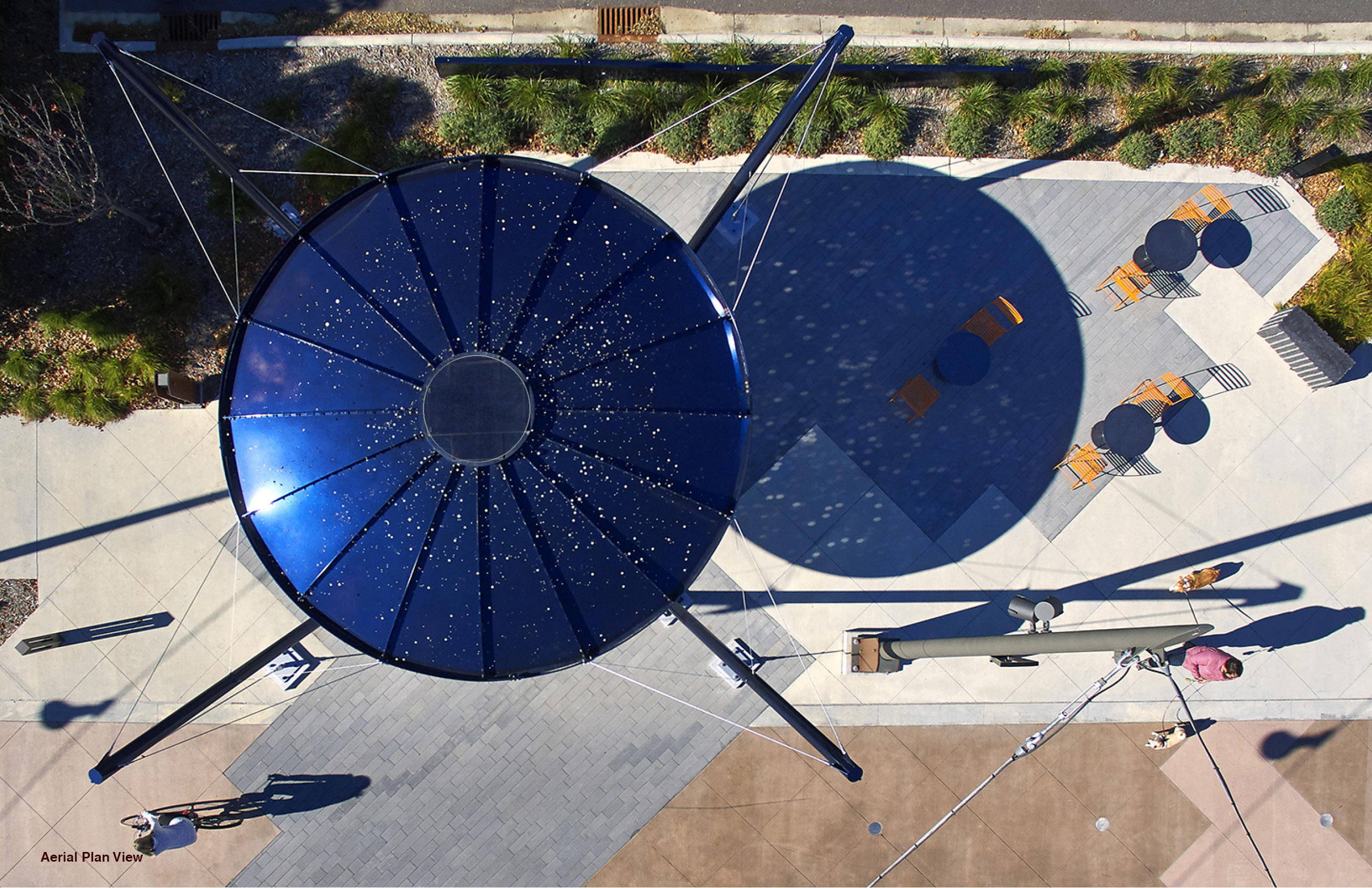 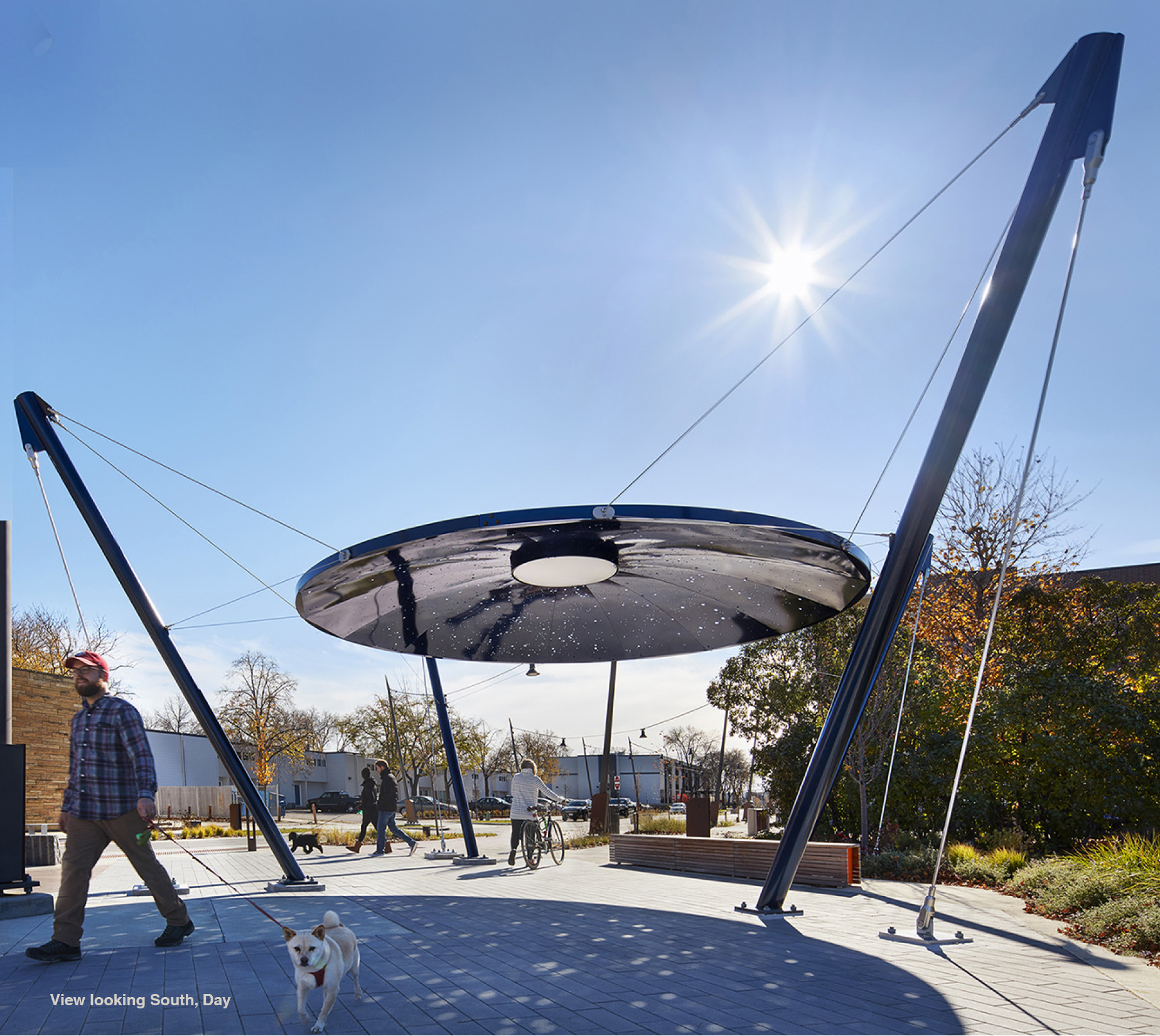 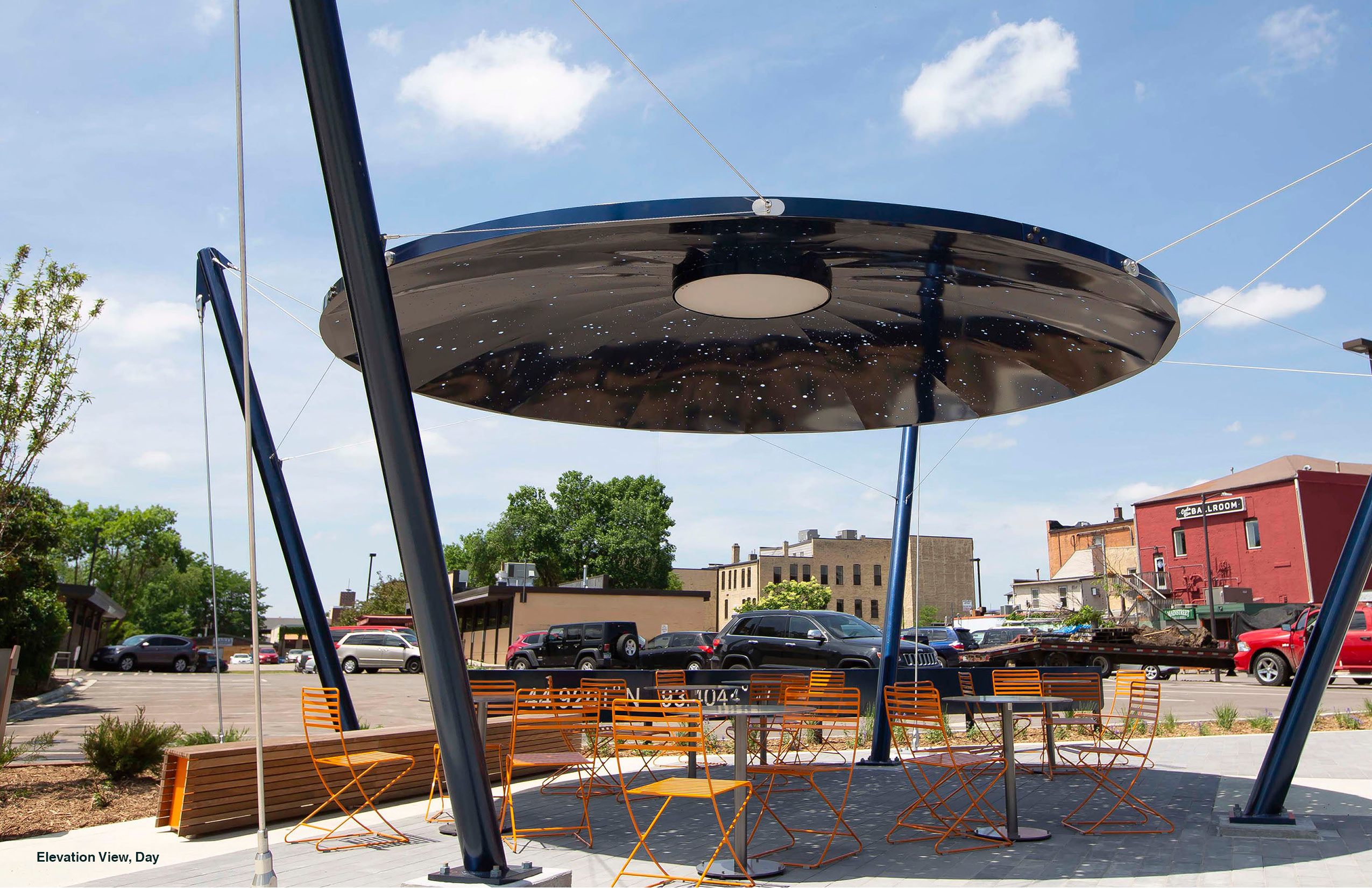 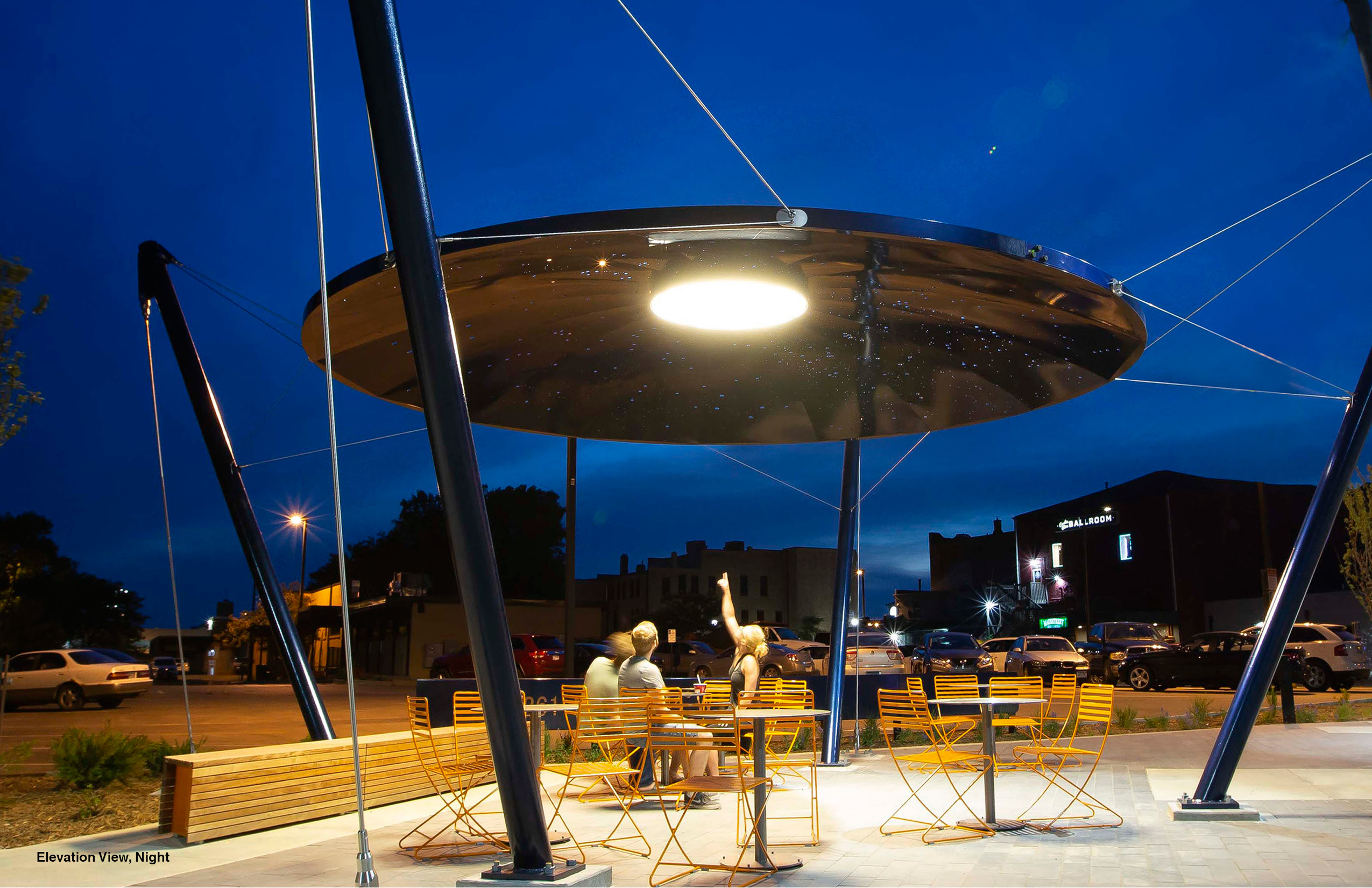 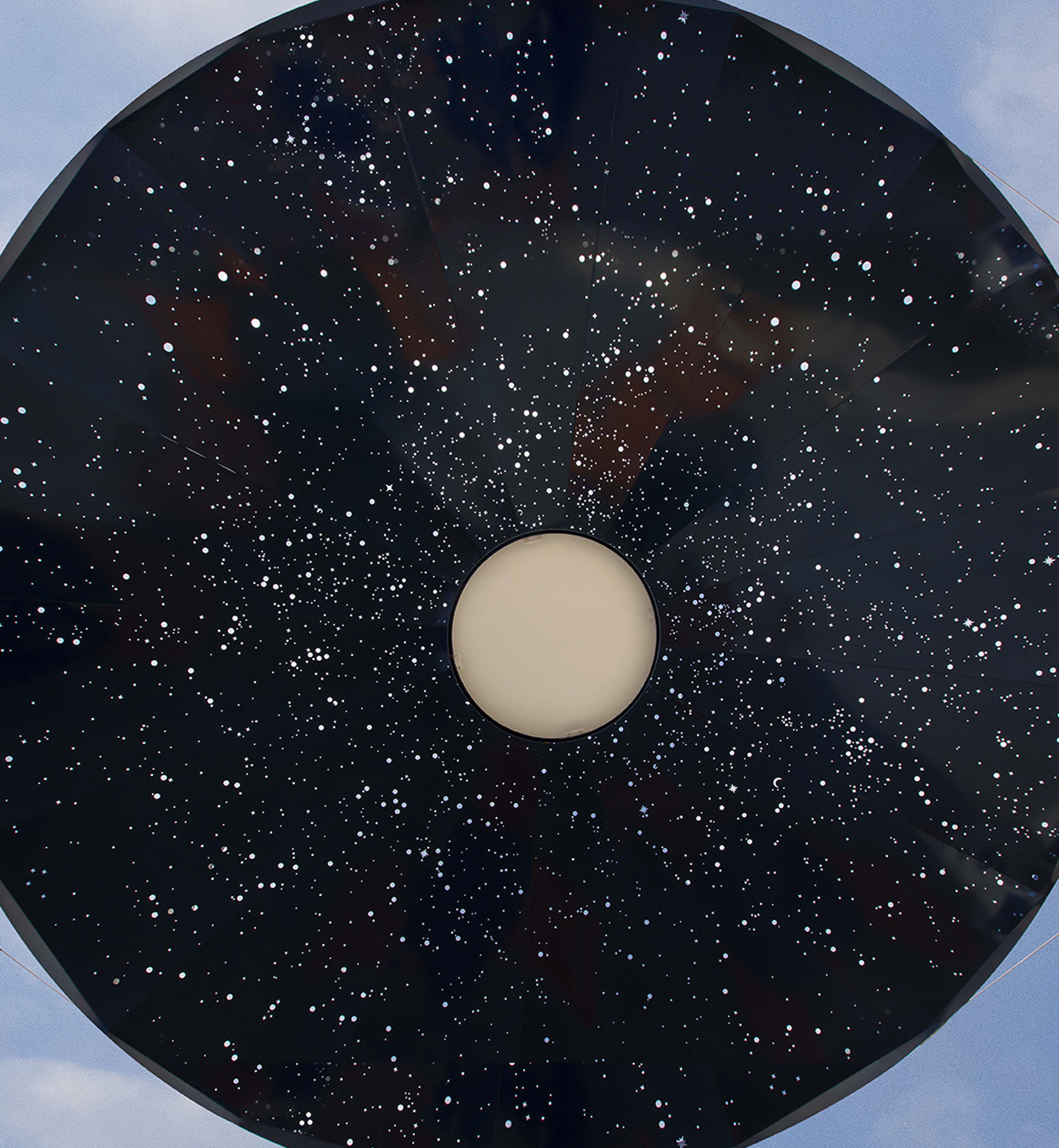 Stars during the day, sunlight shines at night. Night and Day is a 20′ diameter disc of stars suspended 12′ in the air, illuminated during the day by the sun, and by a solar powered “sun light” at night. The piece gives visitors a “place amongst the stars” to gather for performances and events. Blending Hopkin’s history of metal manufacturing with its decades’ long stargazing tradition, we used NASA’s star map database and Hopkin’s unique longitude and latitude to map the exact star formation as seen above Hopkins on the summer solstice. Once mapped, the star locations were laser cut into aluminum panels bolted together to create a shallow dome. Four sizes of perforations are used to indicate distances of the various stars from Hopkins (based on calculated magnitudes of brightness). The dome is suspended from 4 cantilevered columns via a series of post-tensioned, stainless steel rods. An x-shaped concrete foundation ties the system together. This structural solution not only allows for a canopy that looks and feels like it is “suspended in air”, but helps to minimize the cross section of the steel columns and significantly reduces the amount of concrete needed for the foundation while still meeting all load requirements.

At the center of Hopkins’ Artery development, is a plaza that the city wanted to add an art piece to, that would act define the corridor, and serve as a community gathering space and outdoor performance venue. We wanted to create something that would do this both night and day, and also celebrate Hopkin's role in metal manufacturing and their passion for stargazing. By mapping the unique star formations above Hopkins into a metal shade canopy, we created a place for the community to gather under the stars in the middle of the day. In order to activate the space at night, but minimize the impact on the environment and electrical grid, a solar powered “sunlight” was introduced at the canopy’s center. During the day, the sun charges up a battery bank via a 150 watt solar panel array built into the center top of the disc and wired to an LED panel below. At dusk, a sensor turns on the “sun”, thus bringing the day to the night, extending the usefulness of the plaza and creating a space that can be used as an evening gathering space or outdoor performance venue. The slight curvature of the panels helps focus both light and sound on the space beneath the canopy, avoiding excessive light pollution to the surrounding area, while also providing natural sound amplification.