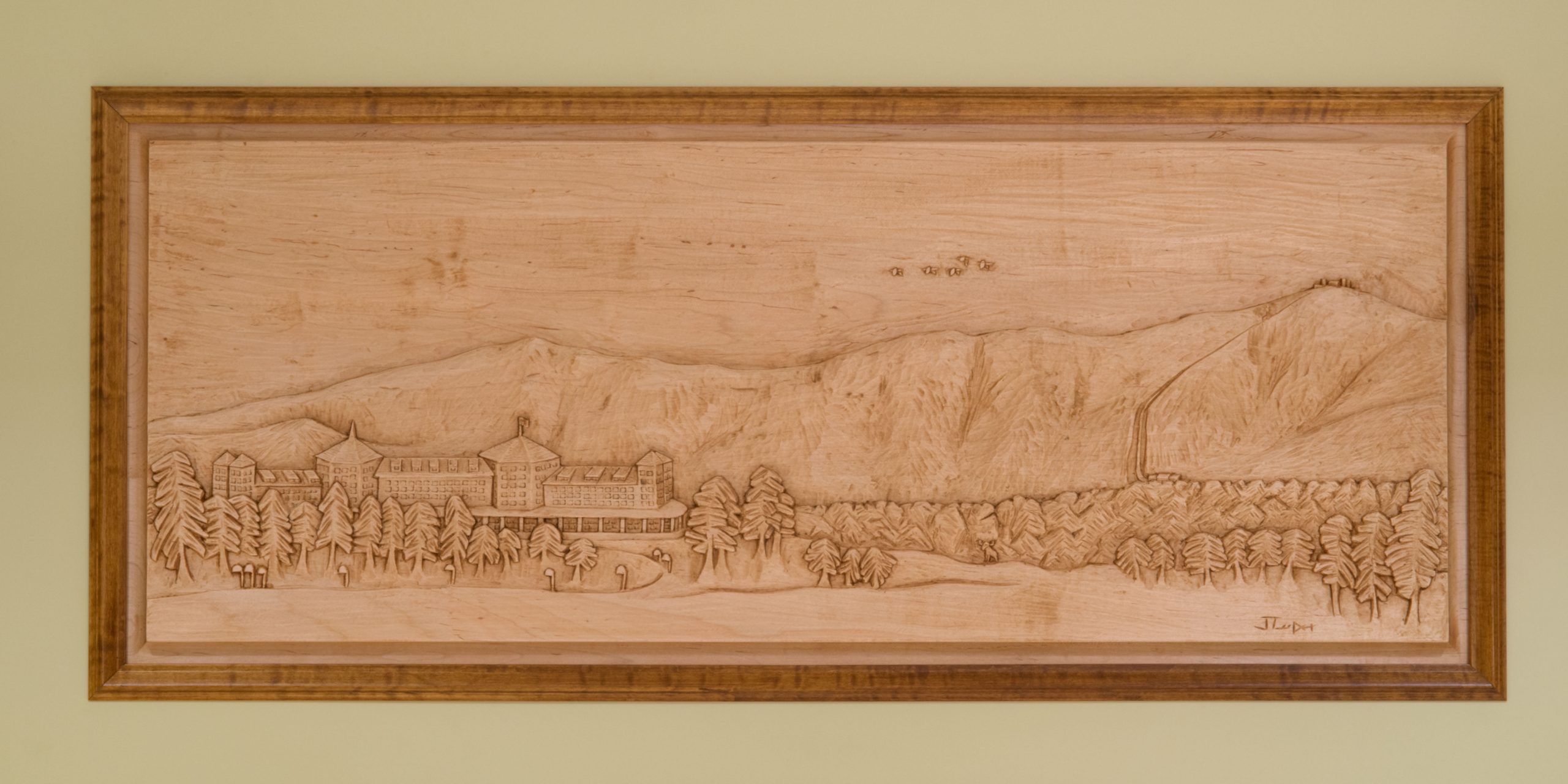 The Bridges House is the home of the late Senator Styles Bridges, which he left to the State of New Hampshire. In an effort led by Dr. Susan Lynch, recently the State’s First Lady, it has been remodeled as the official guest house of the State of New Hampshire. This is where visiting dignitaries and cultural exchanges stay. Being such a historic place, where first impressions are made, Dr. Lynch wanted the design and artwork reflective not only of Senator Bridges himself, but also of the entire State. Cooper’s contribution was these six carved panels in the kitchen.

The whole project was the whole house. Cooper’s involvement was solely in the kitchen; and in the kitchen solely with the cabinetry surrounding the range. Although it seems a small part of the whole, it is important. The décor on the other rooms focused on memorabilia from Senator Bridges. Only this room chose a theme reflecting the entire State. After all, we know the familiar saying, “No matter where I serve my guests, it seems they like my kitchen best.”

The designer selected by Dr. Lynch for the kitchen remodel was Susan Booth, Vintage Kitchens of Concord, NH. Susan was familiar with Cooper’s work through his membership in the New Hampshire Furniture Masters Association. The idea of setting relief carved panels into the cabinetry was hers, and the idea for historic sites came about through discussion, winning out over landscapes, wildlife, and some other suggestions. Using the wonder of Google Images, Cooper presented several ideas. These six sites were selected because they connect well with New Hampshire history, culture and geography. They are the home of Governor Benning Wentworth, The Mount Washington Hotel, site of the Bretton Woods Conference, the Pan Garden at the St. Gaudens Natinal Park, the Amoskeag Mills in Manchester, the Old Man of the Mountain, and the meeting house at Canterbury Shaker Village. Cooper prepared drawings for the six panels with the idea of finding a sponsor for each one, but the first couple approached liked it so much that they underwrote all six panels. The cabinetry was done by Sue’s husband, Steve Booth, with whom Cooper worked closely during construction and installation.

With a background in furniture making I have a wide range of woodworking skills. Recently I have focused on arts oriented pieces, carving and relief carving with a goal of more public art projects. The reason this is rewarding for me is that a wider audience can appreciate the work, and I love the process of listening to the goals of a commissioning agency and expressing that in the project design. It’s not about me. Or rather, my expression will be inherent in the work I can do by applying my talents to help others get their message out.