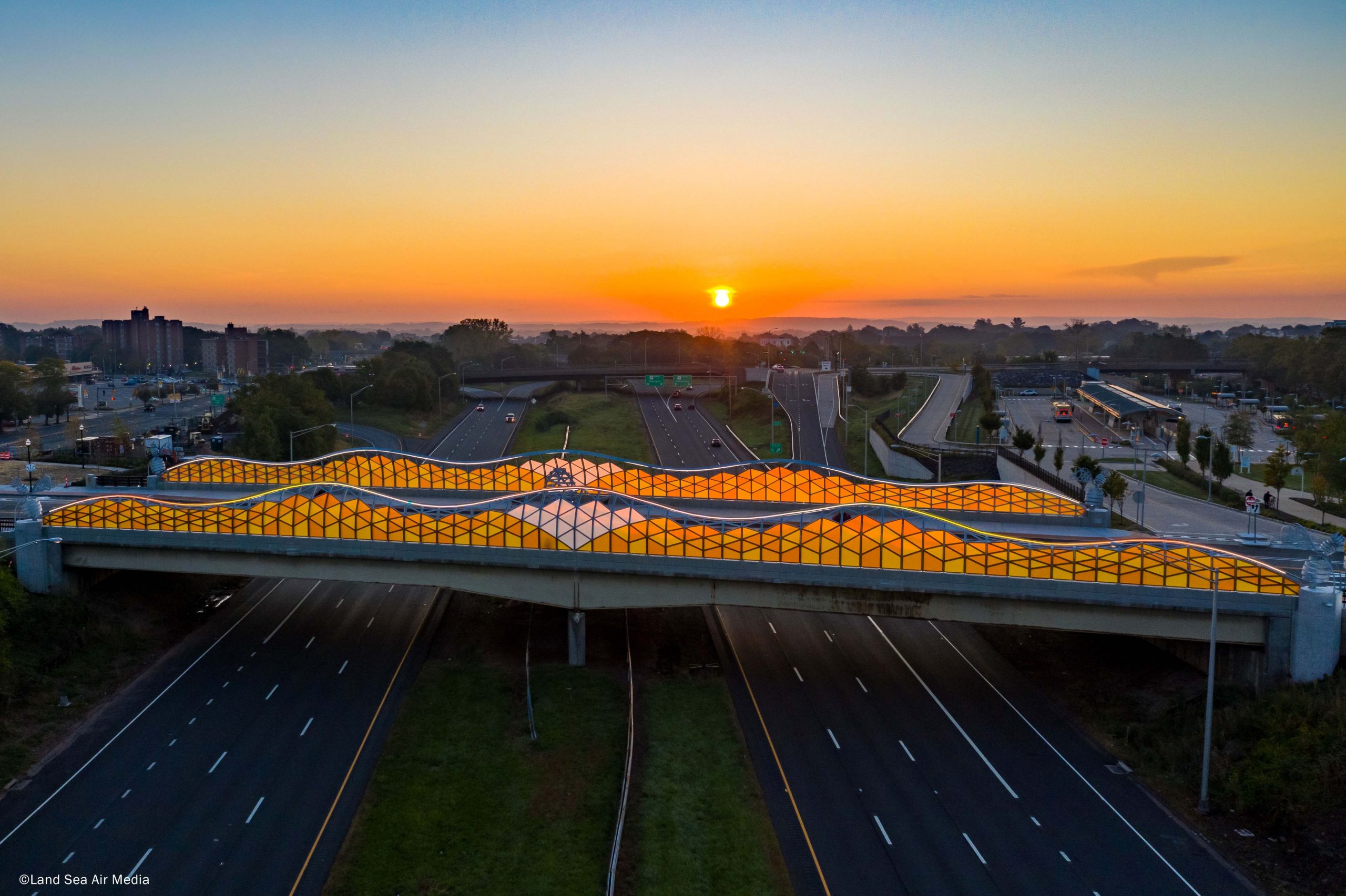 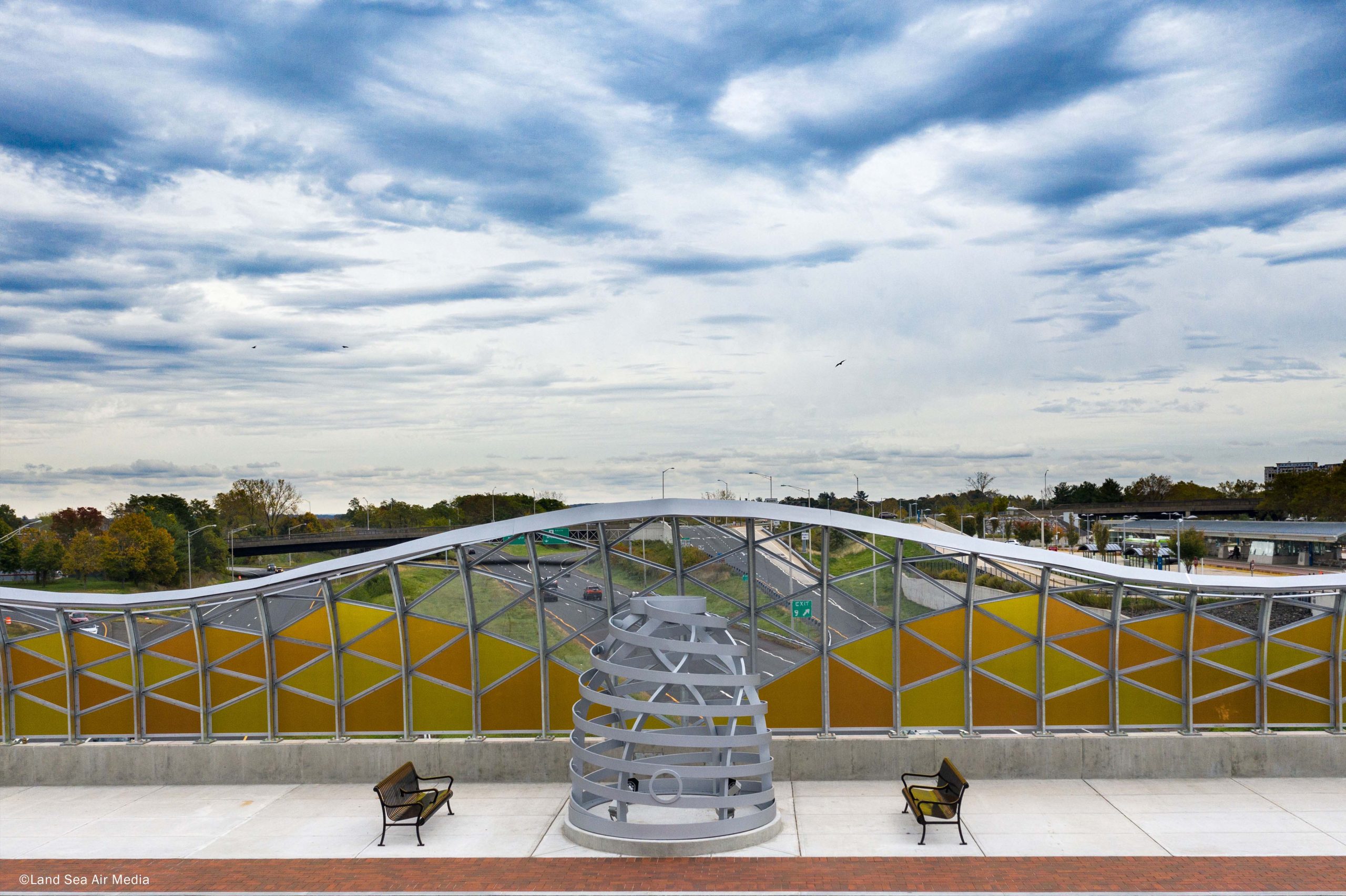 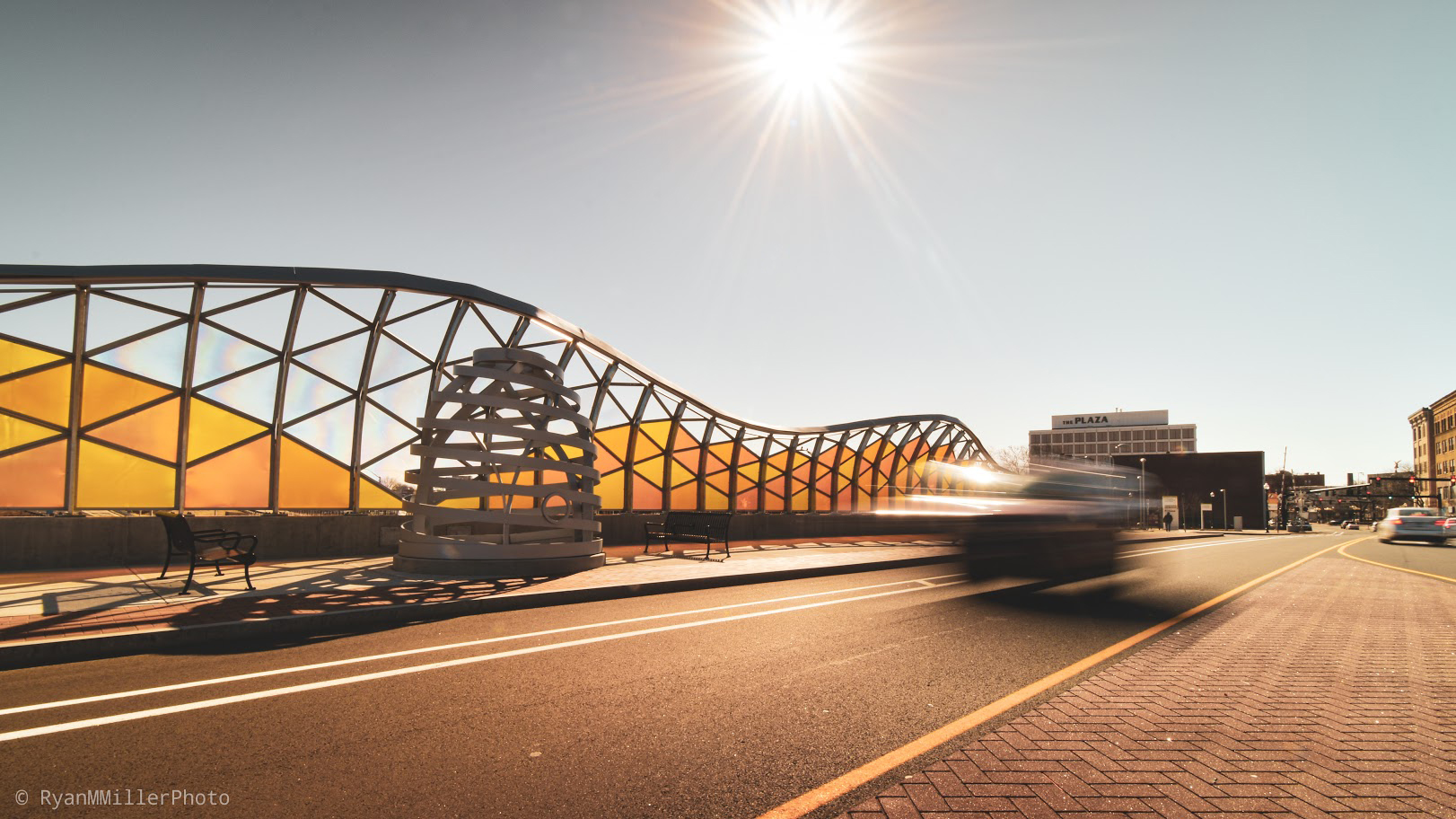 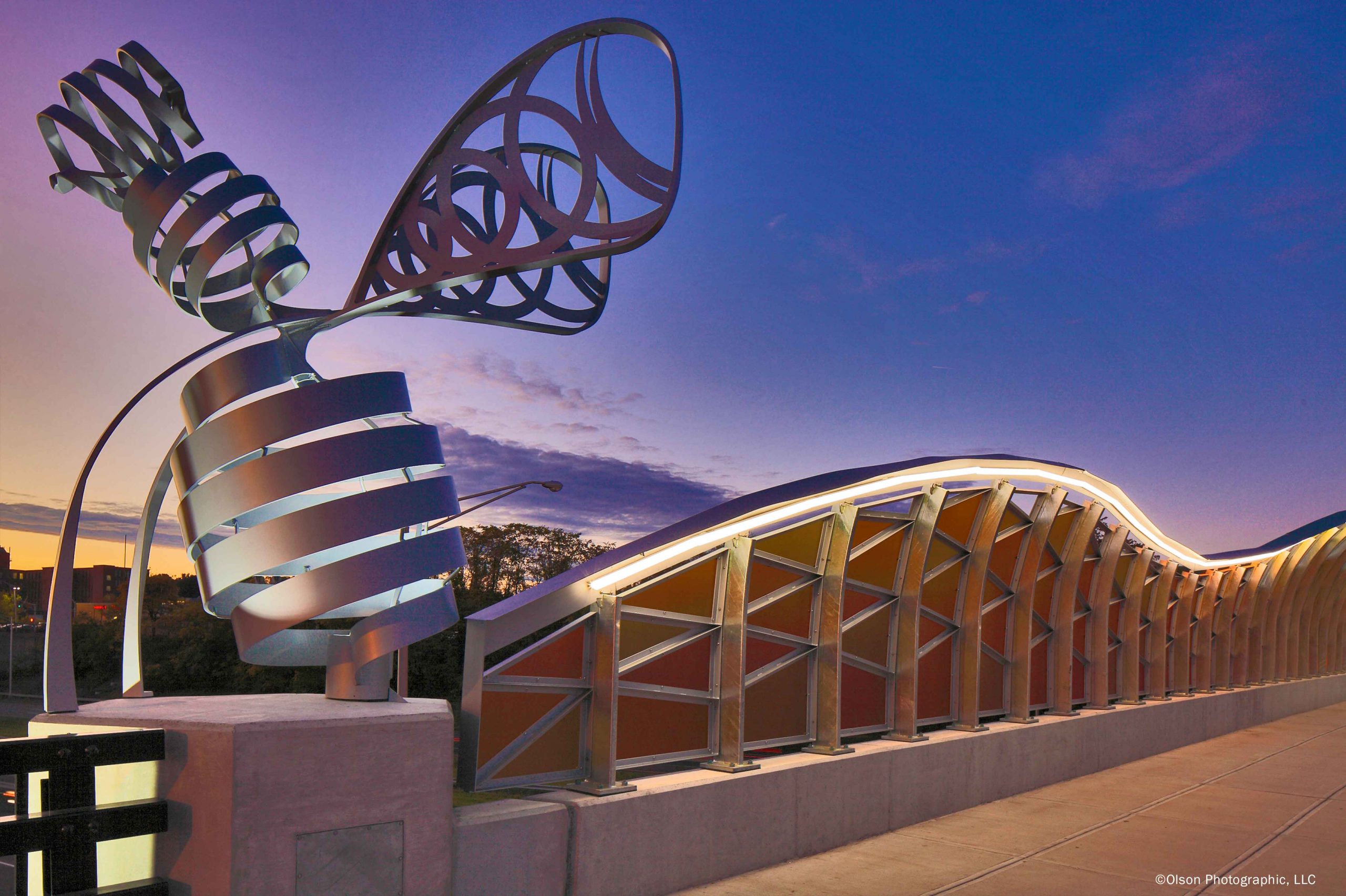 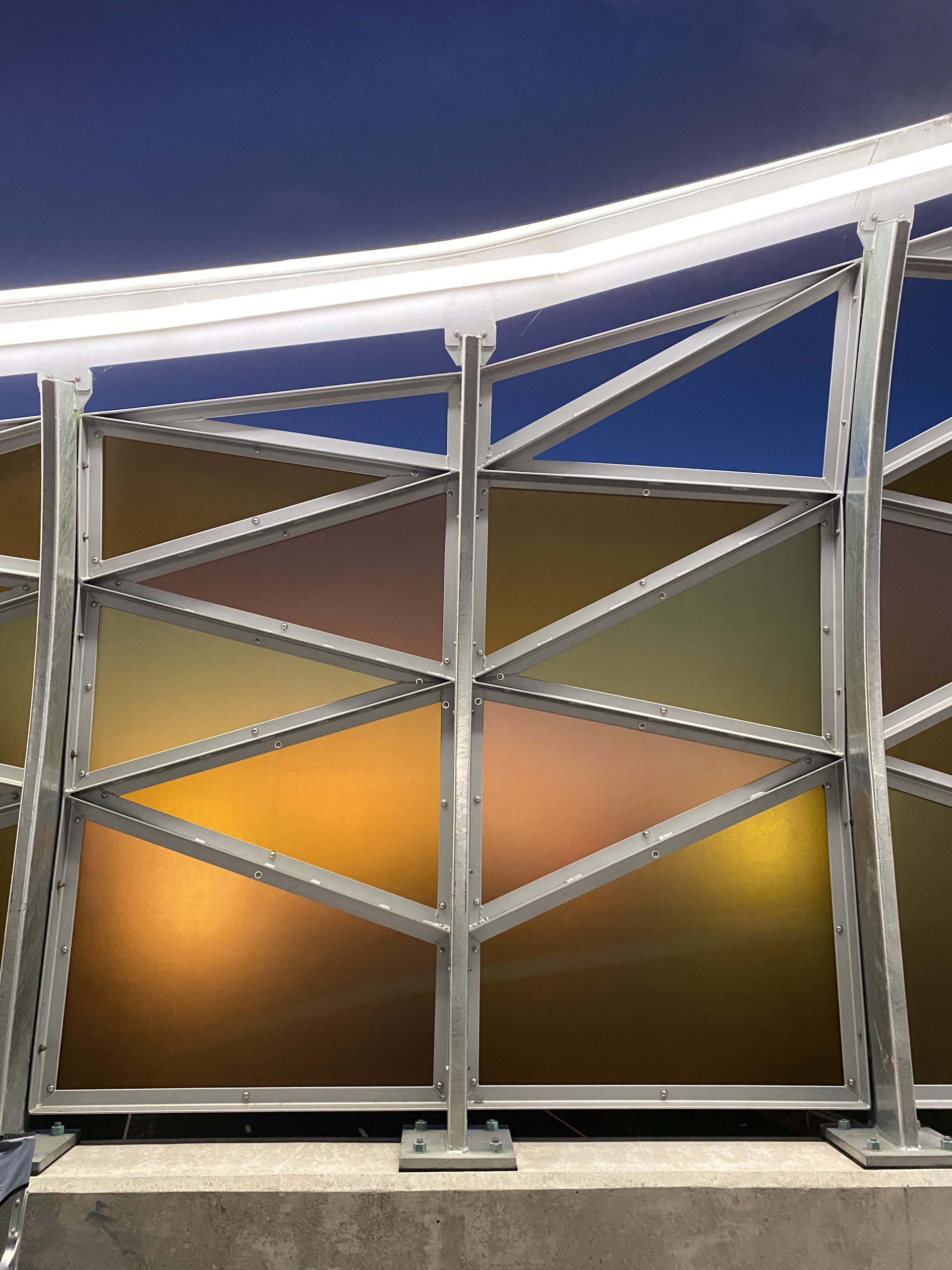 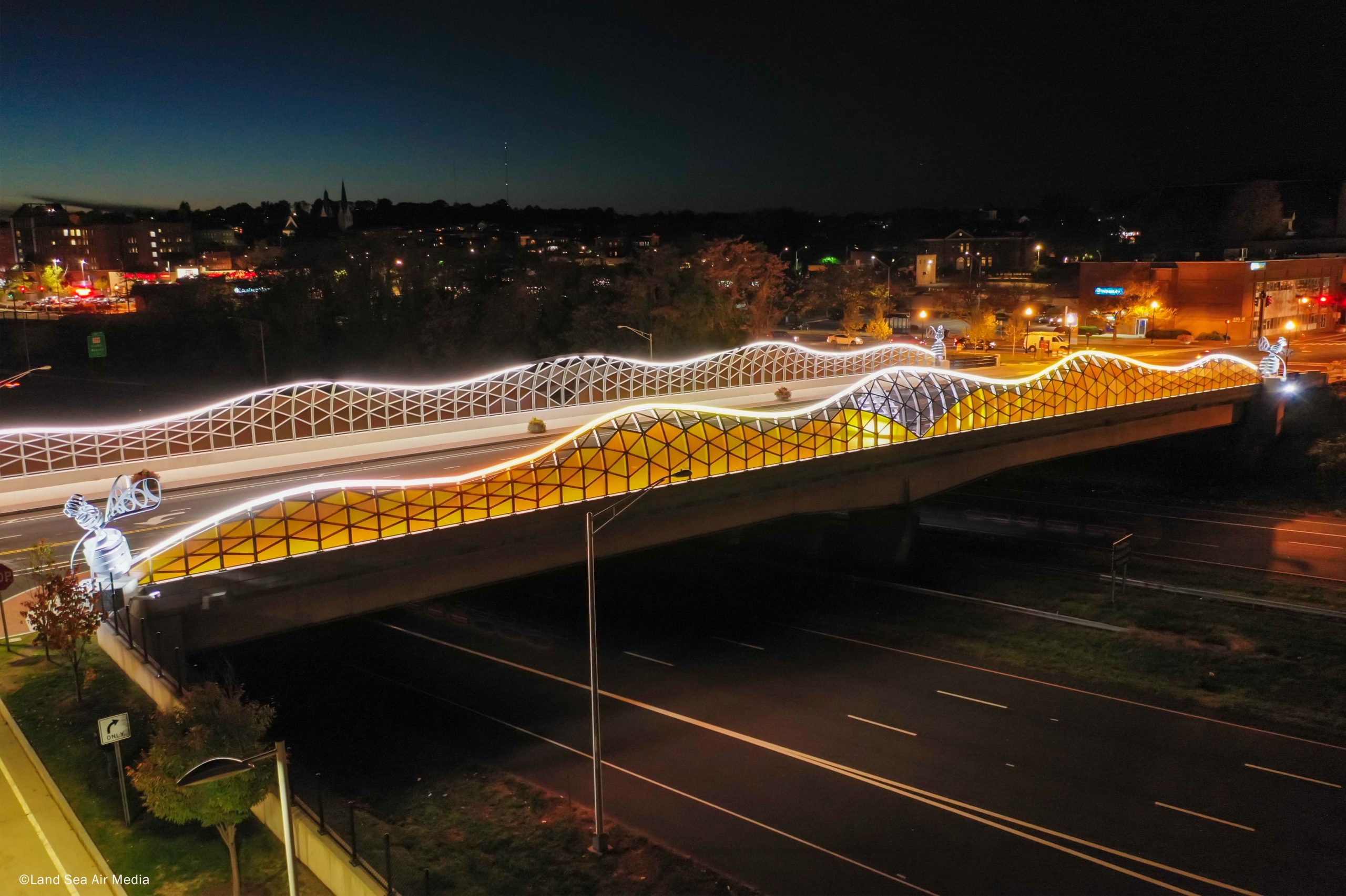 New Britain’s downtown corridor has suffered since Route 72 bisected the city in the 1960s. The Beehive Bridge was designed to bring light, life, and reconnection to downtown.

The new bridge has been noted for its stunning visual impact:
• Twin 250’ undulating steel and aluminum sculptural enclosures meet the sky in a sinuous curve inspired by the flight of the honeybee

• Diamond-shaped metal railings are infilled with translucent polycarbonate panels in golden hues, reminiscent of a honeycomb

Functionally, the bridge transforms the pedestrian experience creating an active business and entertainment corridor. What was previously a five-lane thoroughfare has been reinvented with reduced lanes, expanded sidewalks, large planters, and bike lanes. New pocket parks provide an opportunity for respite along Main Street.

The result is an adaptive reuse bridge that will provide a memorable experience for the people of New Britain, along with the rest of Connecticut. It is a reinvention of the city that belongs to, and reflects, its citizens.

New Britain, in the late 19th and early 20th centuries, was an epicenter for manufacturing – where factories brought immigrants from all over the world together working side by side. This distinction so defines the City that its motto and city seal reflect it: from Latin, “Industria implet alveare et melle fruitur” meaning “Industry fills the hive and enjoys the honey.”

When the creation of a streetscape project to revitalize downtown was introduced, there were no preconceived ideas about how the project should look. However, it was agreed the people of New Britain deserved more than just a simple walkway across the bridge. If reknitting the community was to be successful, a unique and inviting space for the interaction of residents was required -- a complete redesign incorporating public works of art, sidewalks, bike lanes and pocket parks.

Integrated artwork has always been an essential part of human culture and was considered critical to the project’s success. Sweeping railings and bee-themed sculptures celebrate the City’s industrial history and also highlight New Britain’s status as a growing center for the arts in a bright and forward-looking way.

This project was a five-year effort and a massive collaboration between City Hall, DOT, multiple design firms, and a steering committee of local artists and business owners. Project discussions were held with the general public at key moments throughout the design process.

Broad-level participation made the project a success. Excellent community design starts with people who are curious and engaged in the health of their neighbors and neighborhoods. A great number of passionate people participated in this project’s development and ultimately became advocates for the project.

One of the most unique aspects of the Beehive Bridge architectural design is that the railings are composed of compound curves. This means the forms are curving in multiple directions at once. Modeling the bridge in three dimensions was complicated – and then documenting it in a precise way posed a challenge and opportunity for the design team. As a result, we used parametric modeling in a way we had not done previously. We also created study models in paper and cardboard throughout the design process.