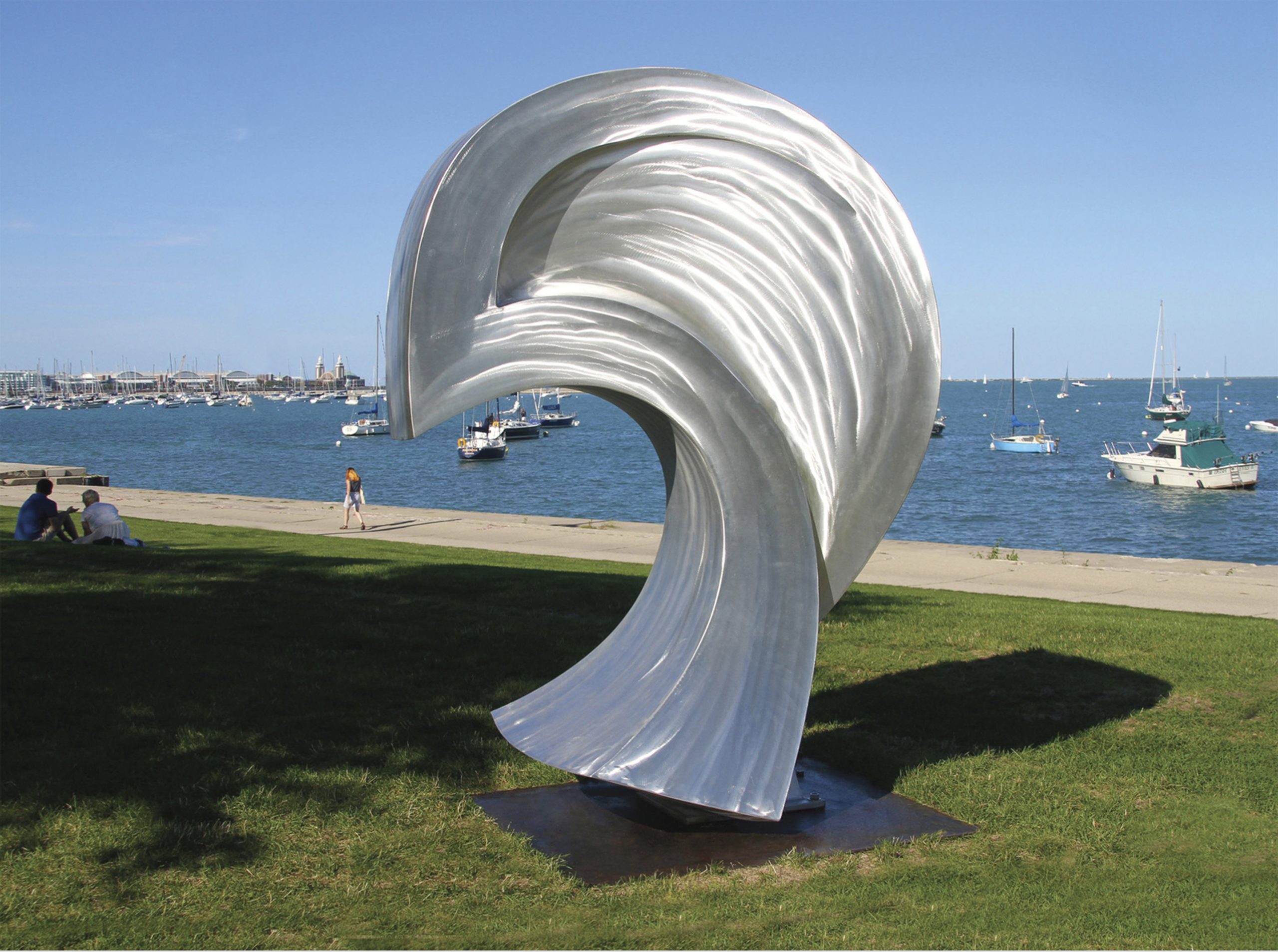 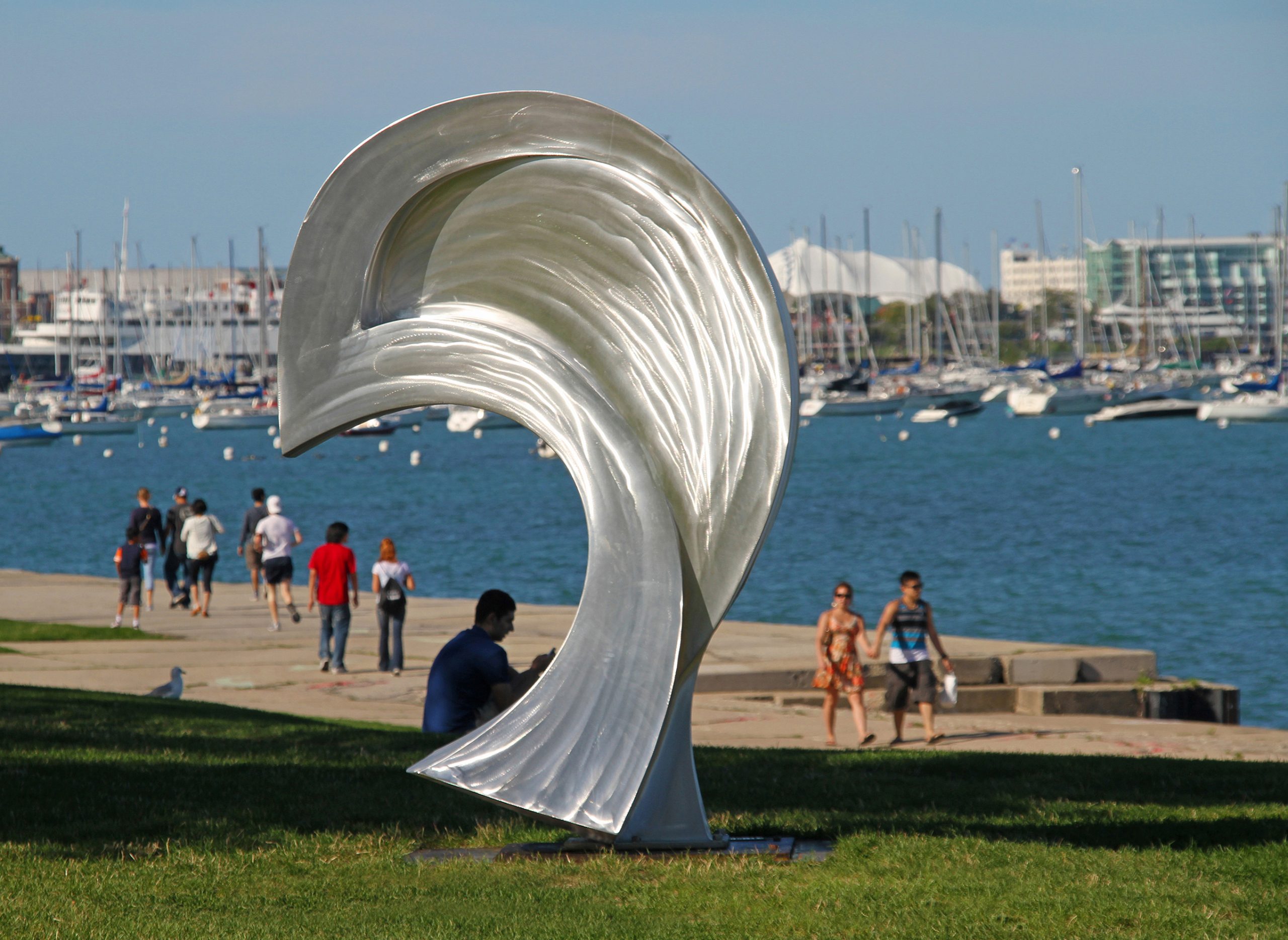 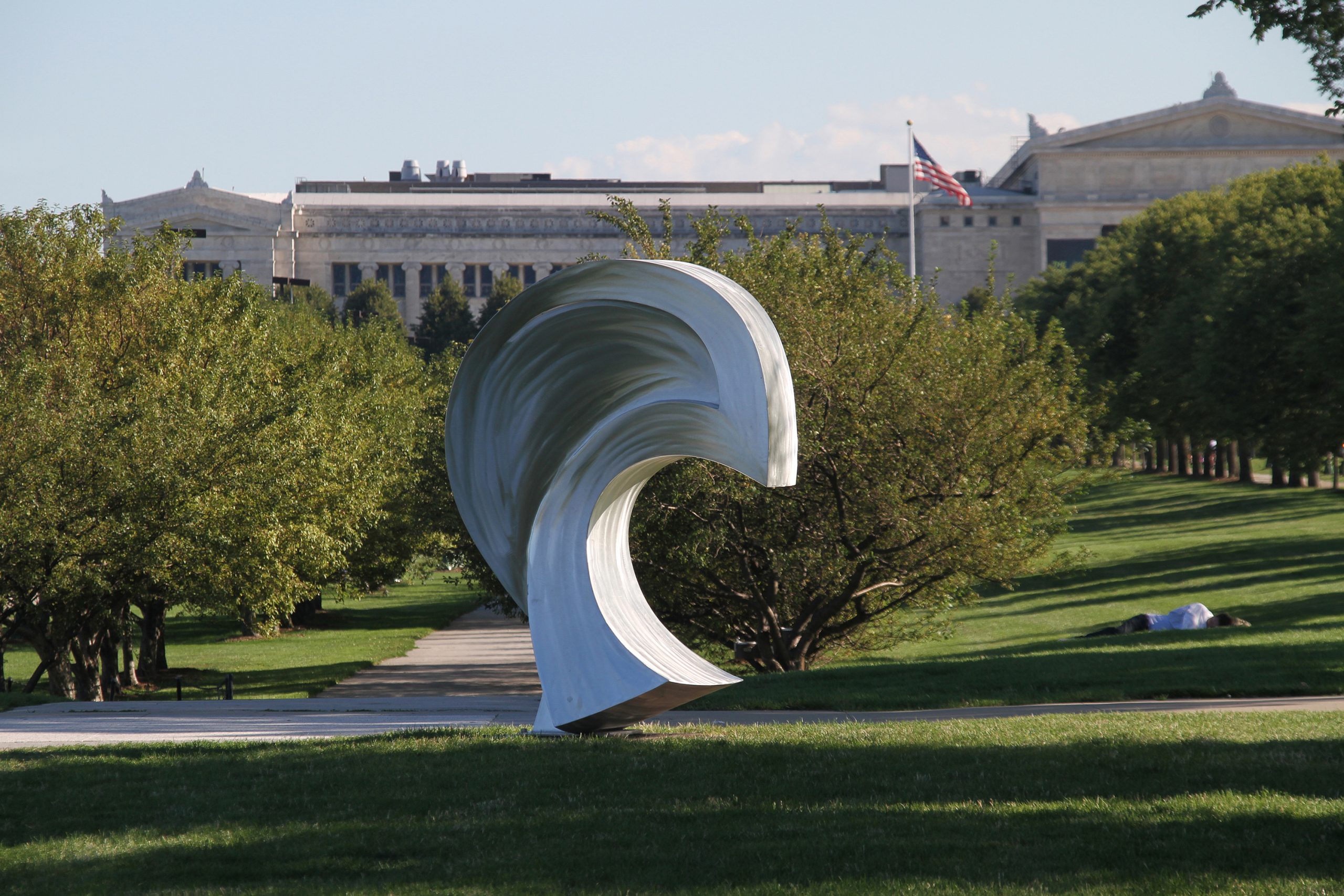 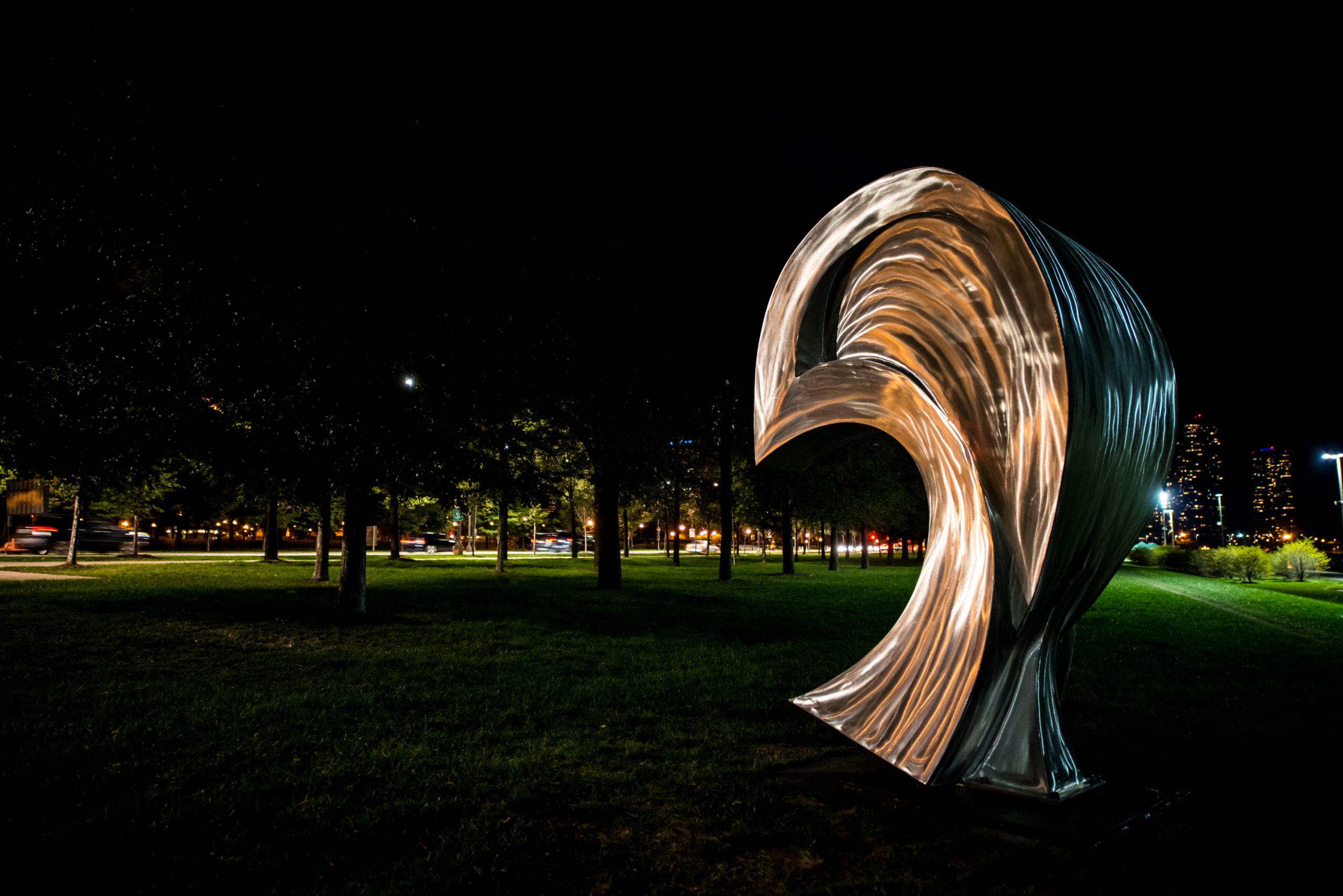 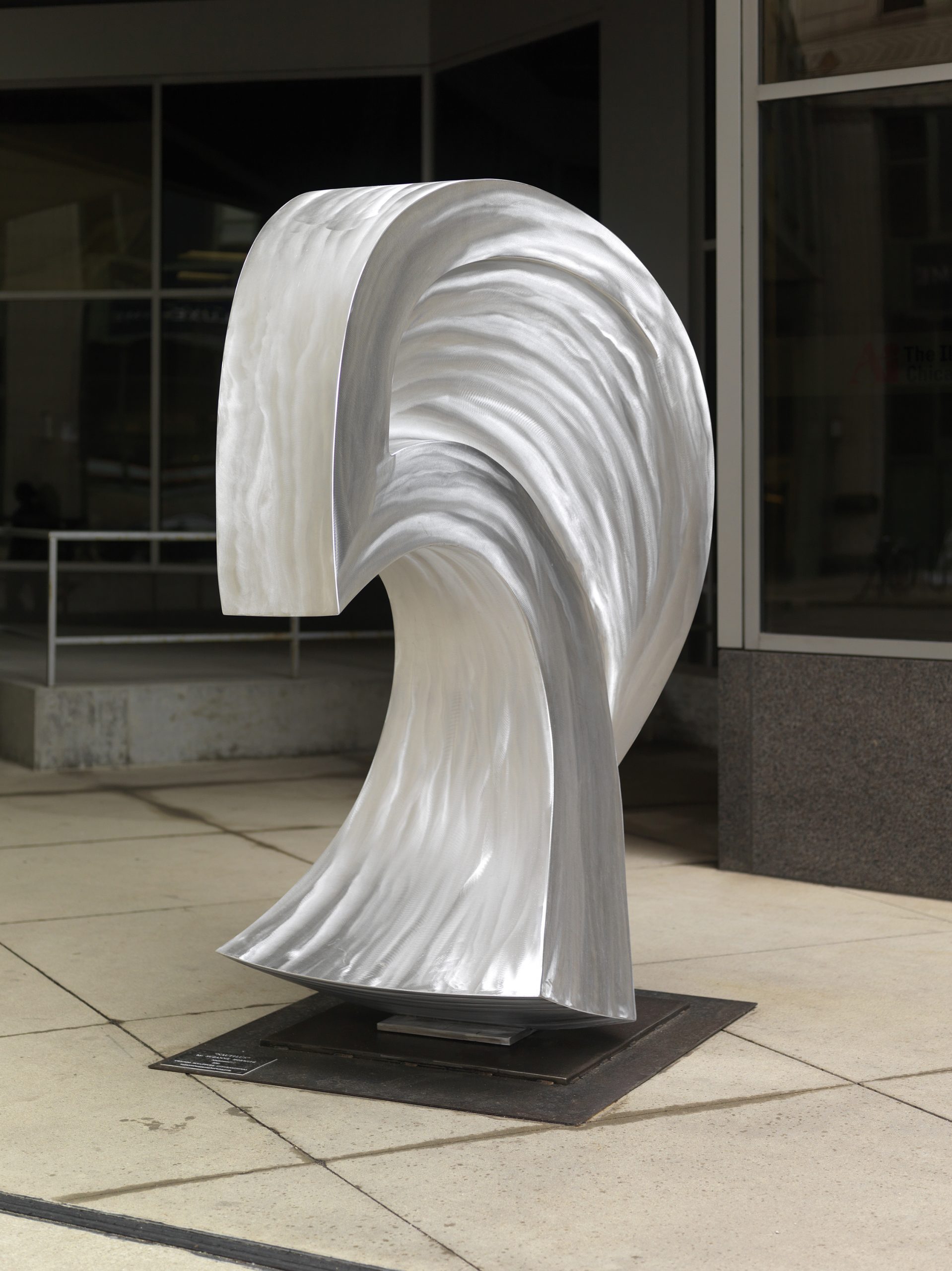 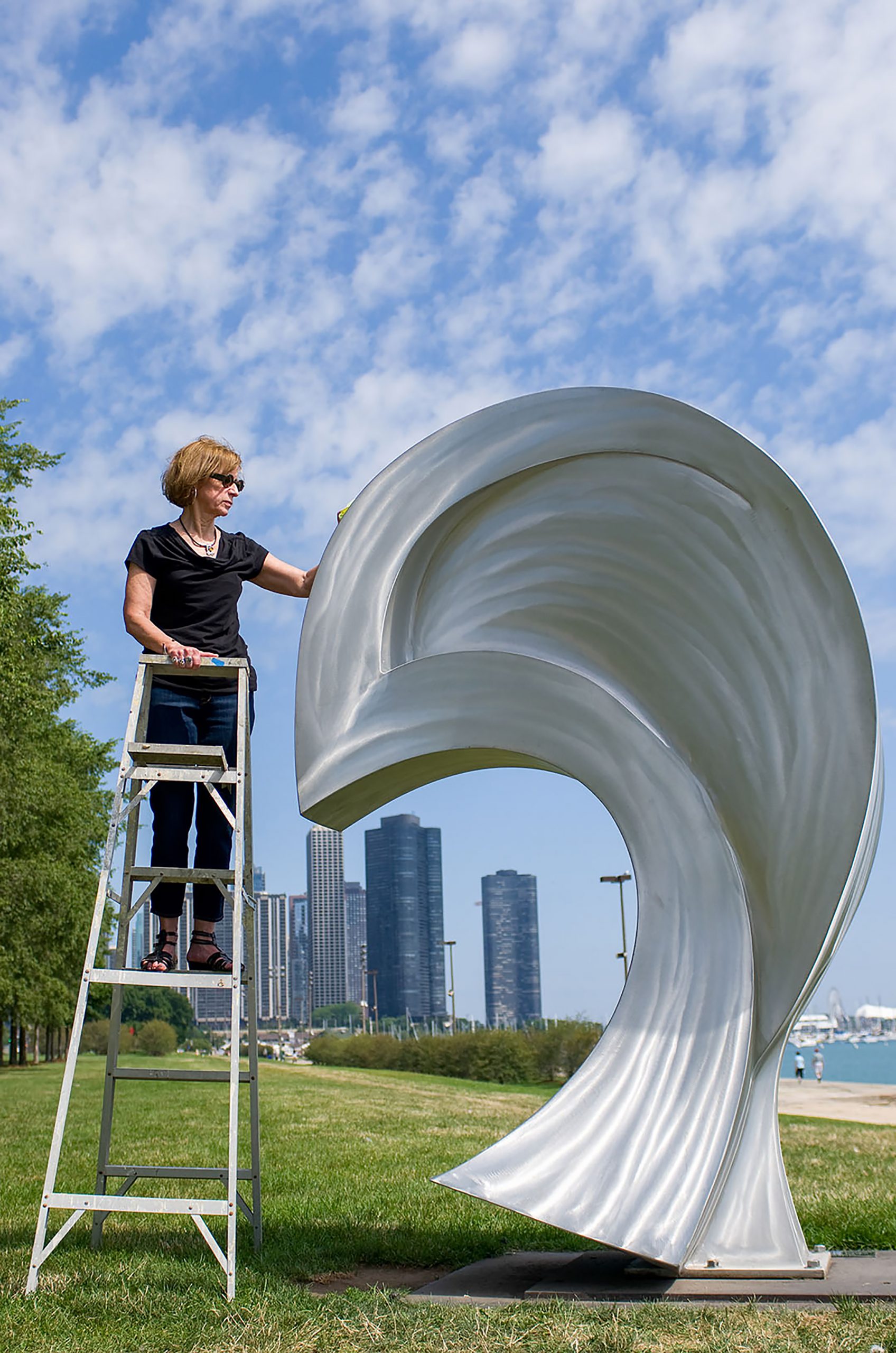 “Nautilus” is an 8’ x 5’ x 3.5’ aluminum sculpture whose surface echoes the movement of the water where it was designed to live. The inspiration germinated from my love of the rhythmic sounds of the waves and watching their ever-changing patterns, reminding me of the vast life source of our planet, water. It was originally conceptualized as a submission for “The Avenue of Sculpture” as part of Art Chicago to be displayed at the Merchandise Mart along the Chicago River.

To design and create a public sculpture that mimics the great power and hypnotic rhythm of Chicago’s waterfront.

“Nautilus” started as a sketch that inspired me to create a clay model. Next, the scale of the piece was considered as its placement was going to be beside one of the largest buildings in Chicago. I considered different materials to use including; steel, foam-core coated resin, fiberglass and aluminum. Aluminum was chosen because its surface texture could be made to resemble water and was a beautiful compliment to site along the Chicago River. Then, as the artist and designer I worked in close collaboration with the fabricator, his assistants and the sculpture installation specialists.

“Nautilus” was selected for "The Avenue of Sculpture" exhibit at the Merchandise Mart during Art Chicago in 2011 by Tony Karman, the President and CEO of Expo Chicago. Subsequently, Richard Hunt, a world renowned sculptor, chose “Nautilus” for a Chicago Lakefront installation on Lakeshore Drive during the Sculpture Chicago Parks Exhibition (2012-2013) in conjunction with the 23rd International Sculpture Center Conference at The School of the Art Institute of Chicago. In 2014, it was chosen by Patrick Dougherty to grace the front lawn of the Evanston Art Center as part of Sculpture on the Lawn. Since then, "Nautilus" has been in high demand by numerous curators for temporary exhibitions, and now it is for sale. Public sculpture, as described by Richard Hunt, “responds to the dynamics of a community.” I find the scale, the viewers’ interaction with the art and its democracy exhilarating.