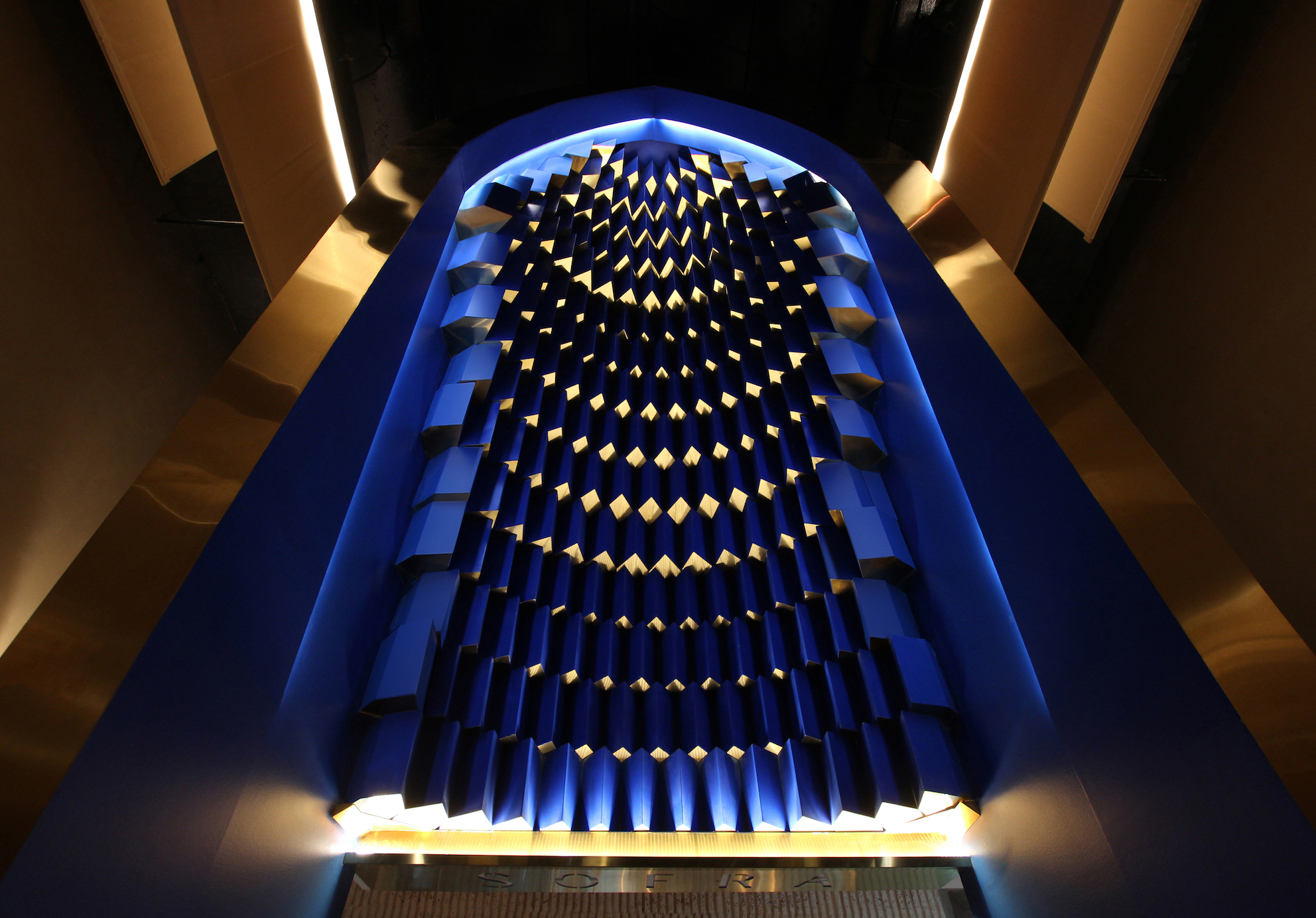 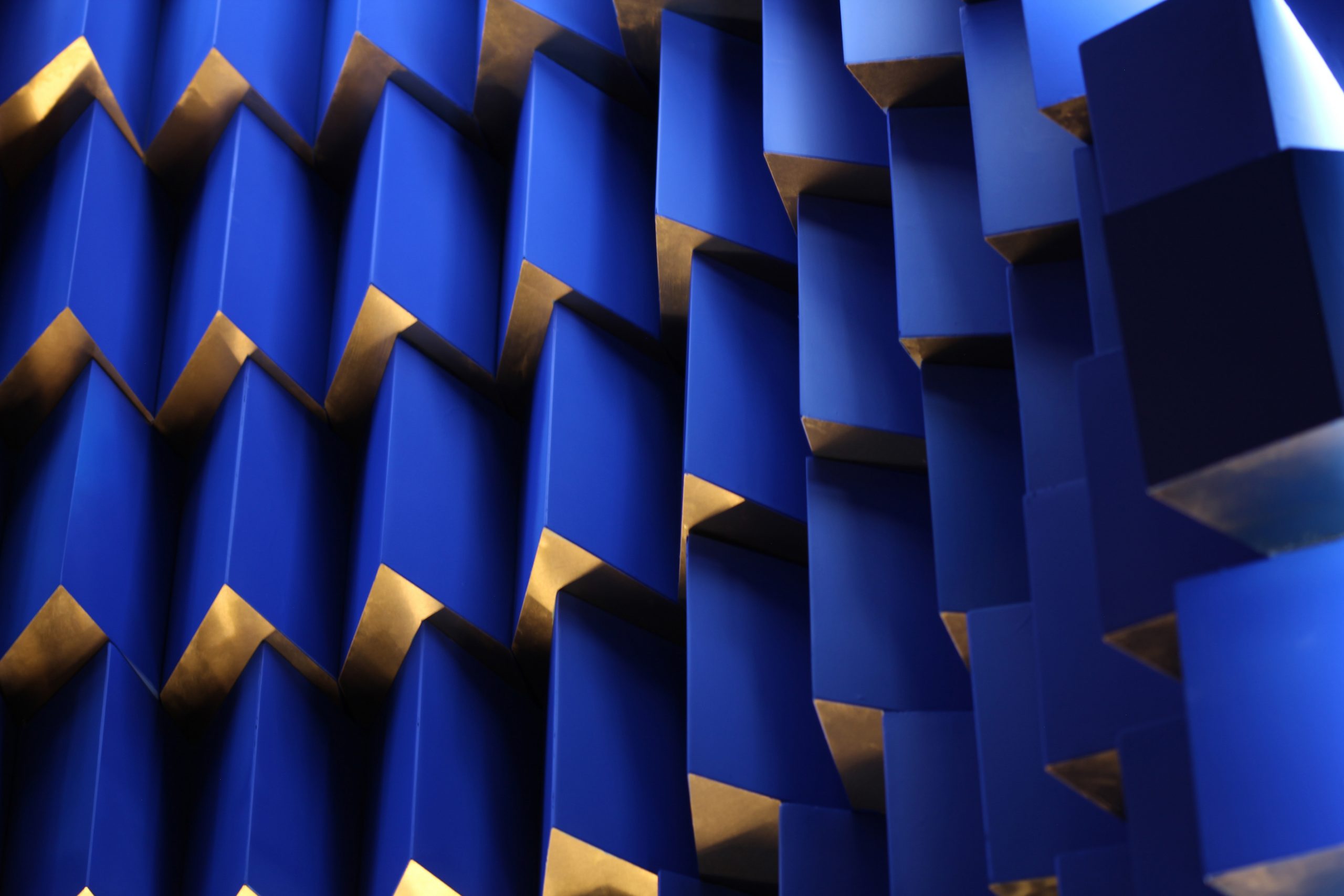 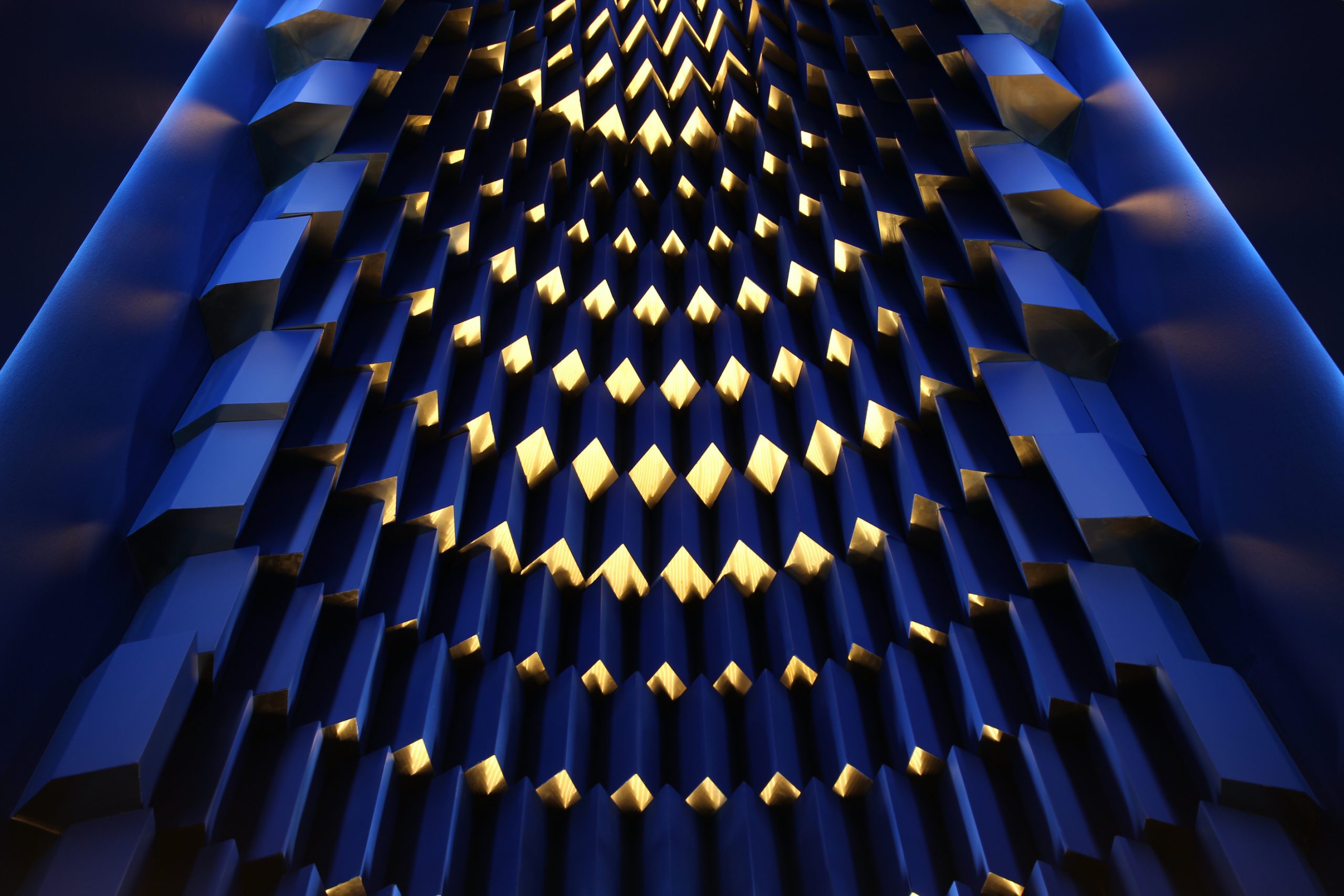 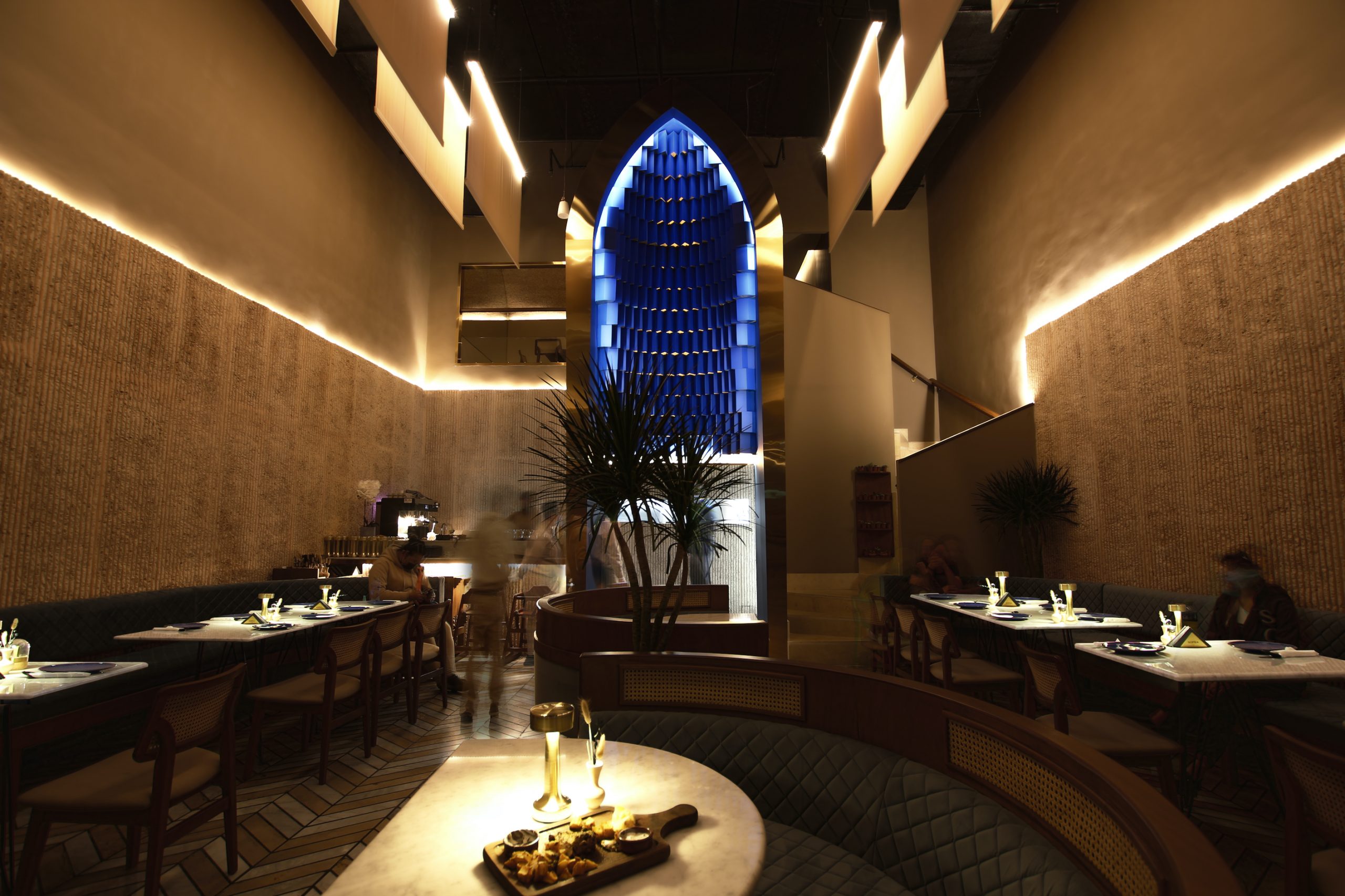 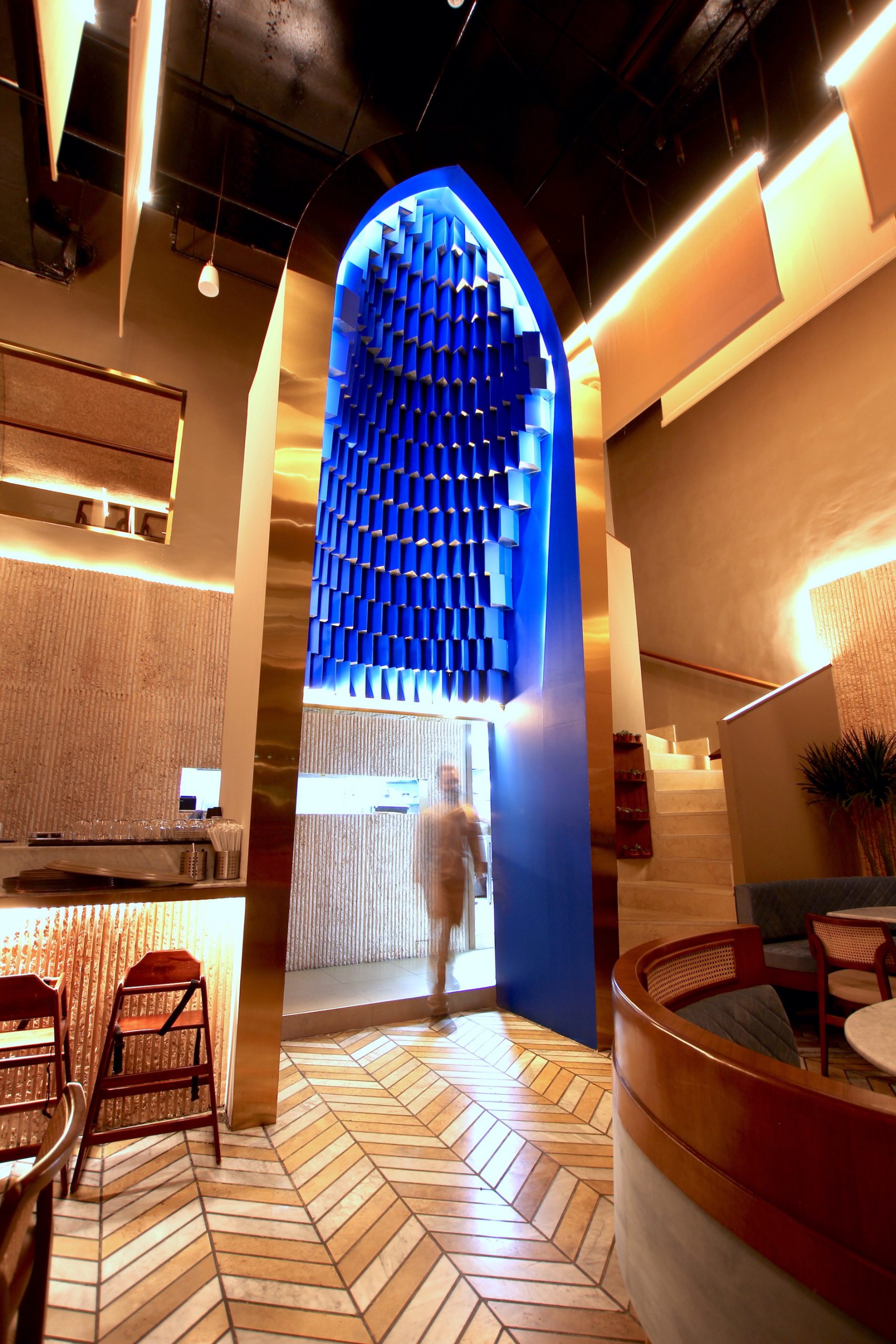 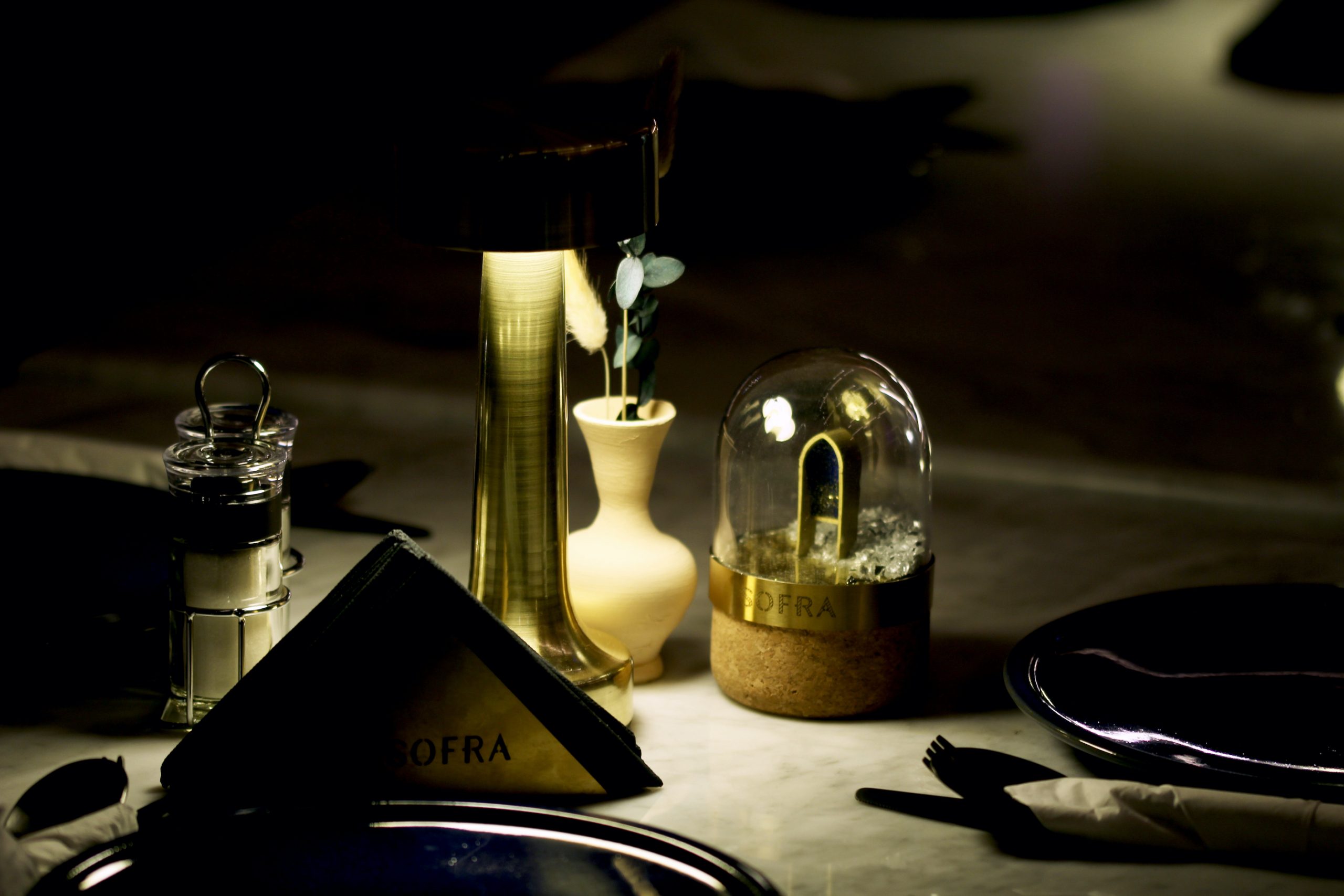 Muqarnas Sofra is a fully integrated appendage to the contemporary Arabic dining experience the restaurant has to offer, it incorporates the restaurant’s philosophy of hybridity between old & new, East & West with Turkish influences.
Manmade Studio manifests this concept through design by deconstructing one architectural element the Northern Arab region is renowned for; the muqarnas (honeycomb/stalactite vault). Traditional patterns were studied before developing this unique geometric development that cannot be built using traditional construction methods. This arched passageway has a contemporary Arab style that is in line with the restaurant’s concept of exchanging cultures.

The installation aimed to be innovative by hybridizing a classic architectural element of the region with contemporary design schools of thought (minimalism) as well as the brand identity of the restaurant; cobalt blue, gold, and the contemporary Turkish style. It aimed to be conceptually innovative by playing with the phenomenological aspect of the muqarnas commonly located at the vestibule that separates the urban fabric from a spiritual sanctuary, and this is mirrored in the restaurant's division between the service and the served, highlighting the fine dining experience.

Furthermore, it has served its purpose which is to provide the otherwise simple interior with a unique identity that is representative of the contemporary Turkish cuisine, taking into account the brand colors (cobalt blue and gold), and it has served its purpose by elevating the interior to a more 'royal' status to reflect the fine dining experience. Architecturally, it is dividing the space between service and served.

This creative process flourished because of the chemistry with the commissioner, they were very visually attentive and could speak the aesthetic language of artists and designers so it was easy to communicate and brainstorm ideas. Some changes were made during the fabrication process because of discussions with the commissioner that led to an improvement in the aesthetic result whilst keeping the conceptual side robust.

Manmade Studio researched into the various architectural elements that the rich Turkish architecture is known for - which are numerous - and honed in on one element; the muqarnas, which is commonly used in the thresholds of mosques which separate the sacred space from the rest of the civil urban fabric. It is in this space - also known as a portico or liwan - where the Muslims remove their shoes and enter the mosque to purify their souls, it became evident that this was the appropriate archetype we will translate in this project. So this threshold acts as the portal between the service area and the dining area to provide a physical and psychological barrier for the servants that cross it so frequently per day and benefit from basic mental reinforcement to operate with high proficiency considering they are juggling so much. Meanwhile, the 'facade' that faces the guests has a presence that immediately communicates to the guests that they will be tasting a slice of contemporary Turkey. The archway stands tall allowing servants to pass from below whilst creating a contemporary Arab identity from above that is almost preaching to its listeners whether they be guests, servants, or tables and chairs, in an animated dialogue, with guests constantly walking up to it to take pictures.