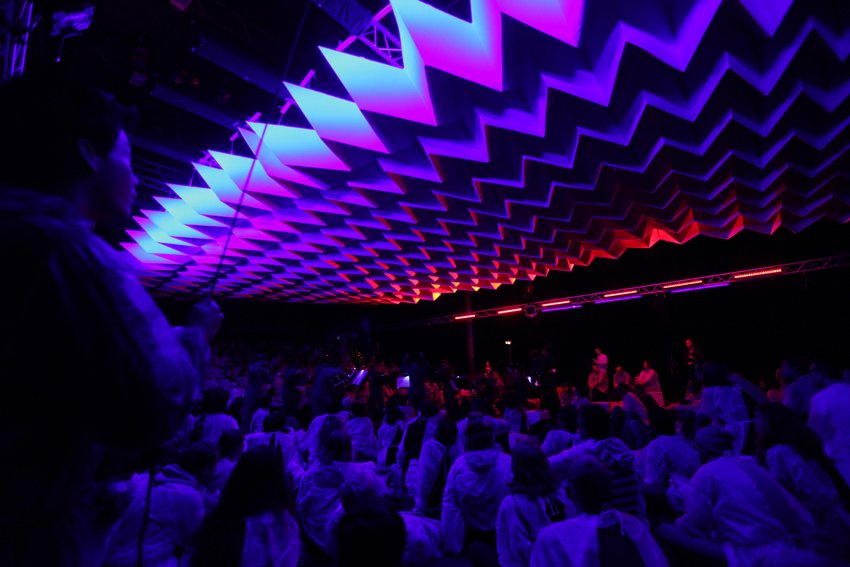 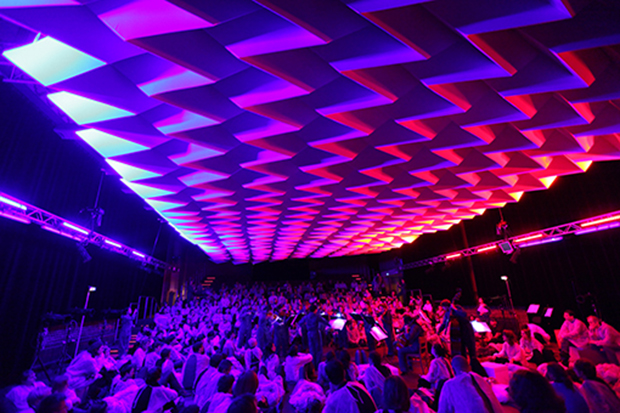 ‘Fremde Orte’ (meaning 'estranged places') feat. Movigami – a kinetic concert installation suspended from the ceiling.
My comission was Direction & Architecture for the concert

The feeling of being alienated or foreign has influenced all four composers performed at the concert. It is a feeling that becomes evident in their compositions, which not only draw back on their biography, but also serve as inspiration for a place of refuge.
Claude Vivier’s parents were never known to him. An insatiable longing for love and a home brought along a lifelong feeling of displacement, which he was to counteract with musical compositions.
Joseph Haydn in turn was a very grounded and intrinsically tied to his hometown. However, having composed exclusively upon commission, he experienced the confinements of security.
Iannis Xenakis was forced to leave his home country Greece.
Jennifer Walshe creates a world with her music in which ambient sound is accentuated.
Thus, whatever the difference in approaching music there may be, all four composers are intrinsically linked through the urge of finding a direct connection with their surrounding reality.

The concept was develped out of the conent of the story the concert should tell. Given free hand on designing the concert space, the musicians embraced the concept that was first concieved through a model. Technicians at the performace space were vital for the realisation. Due to a limited budget, anyone who found time (from accountant to actor, musician to agent) helped to cut parallelograms out of cardboard, stick them on to fabric and fold it all together to create a folded pattern of 25m x 11metres. (folded the structure was so small, that it fitted into a pick-up truck) without all this help and support and the great enthousiasm, musicians, tehcnicians and helpers alike, it would have never been possible.

The structure is estremely light weight and hence ideal strucuturally. It folds together and makes transportation easy and enhances acoustics in a challenging perormance space. Light and movement make it a dramatic interactiv installation.