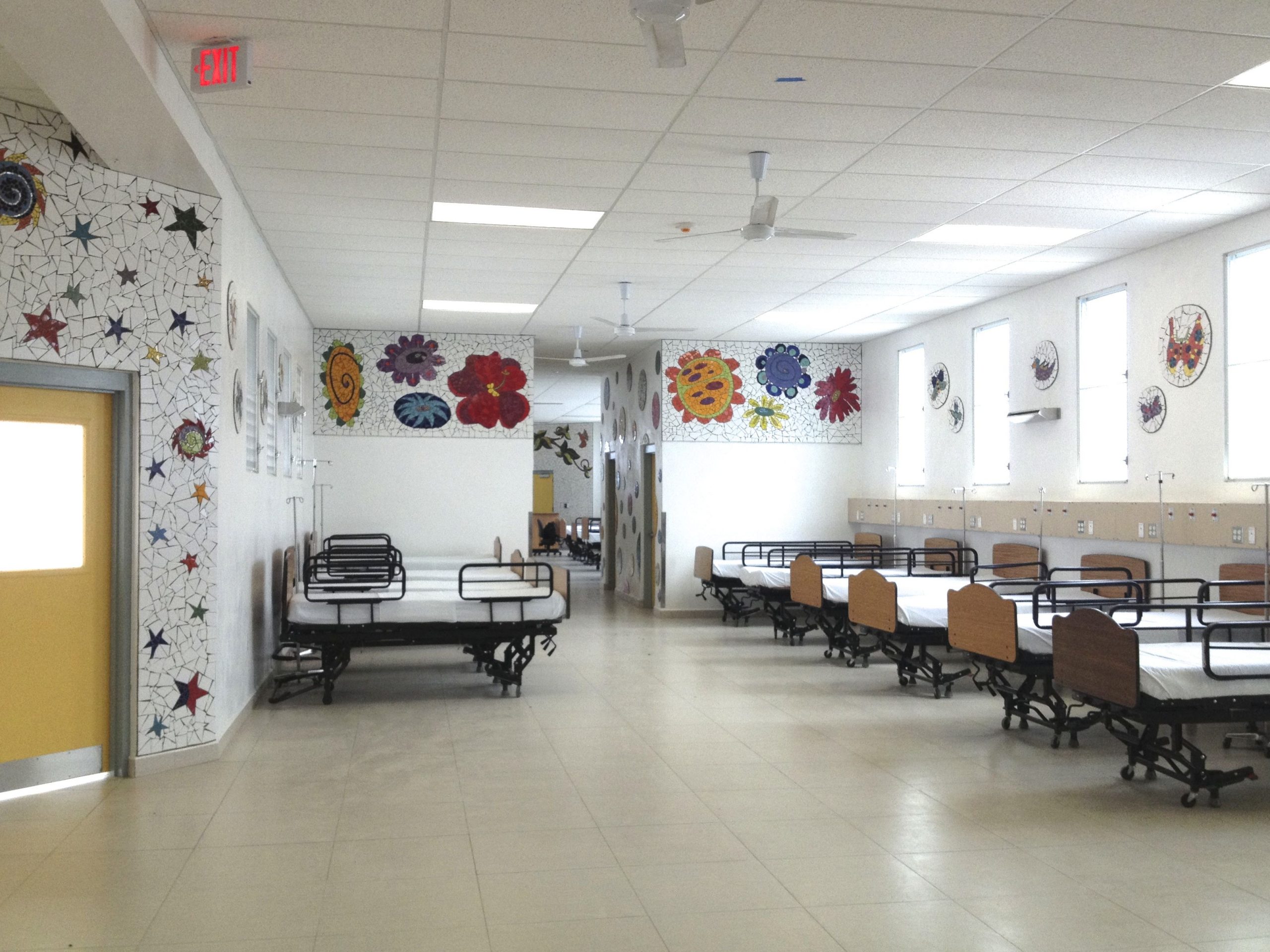 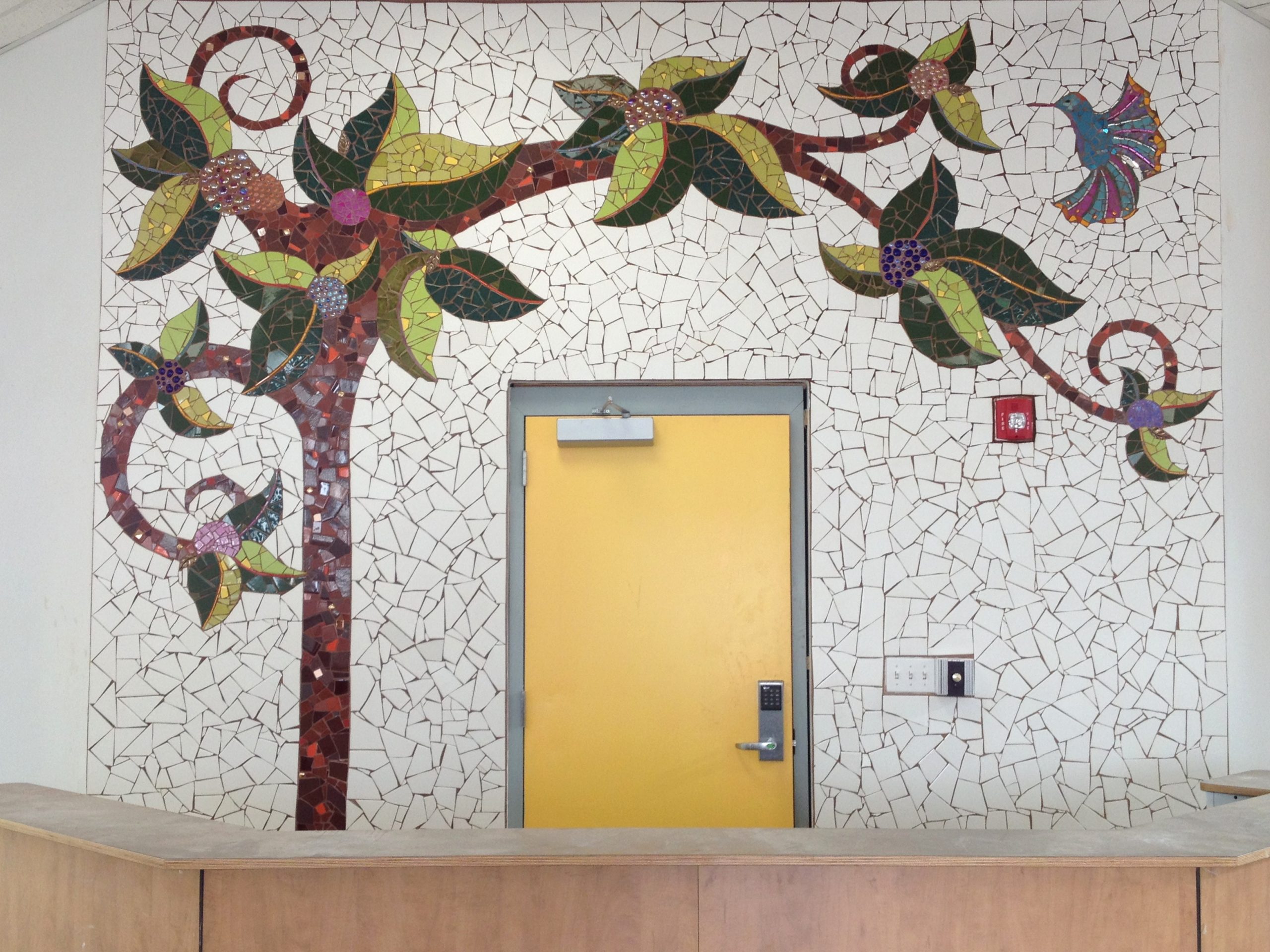 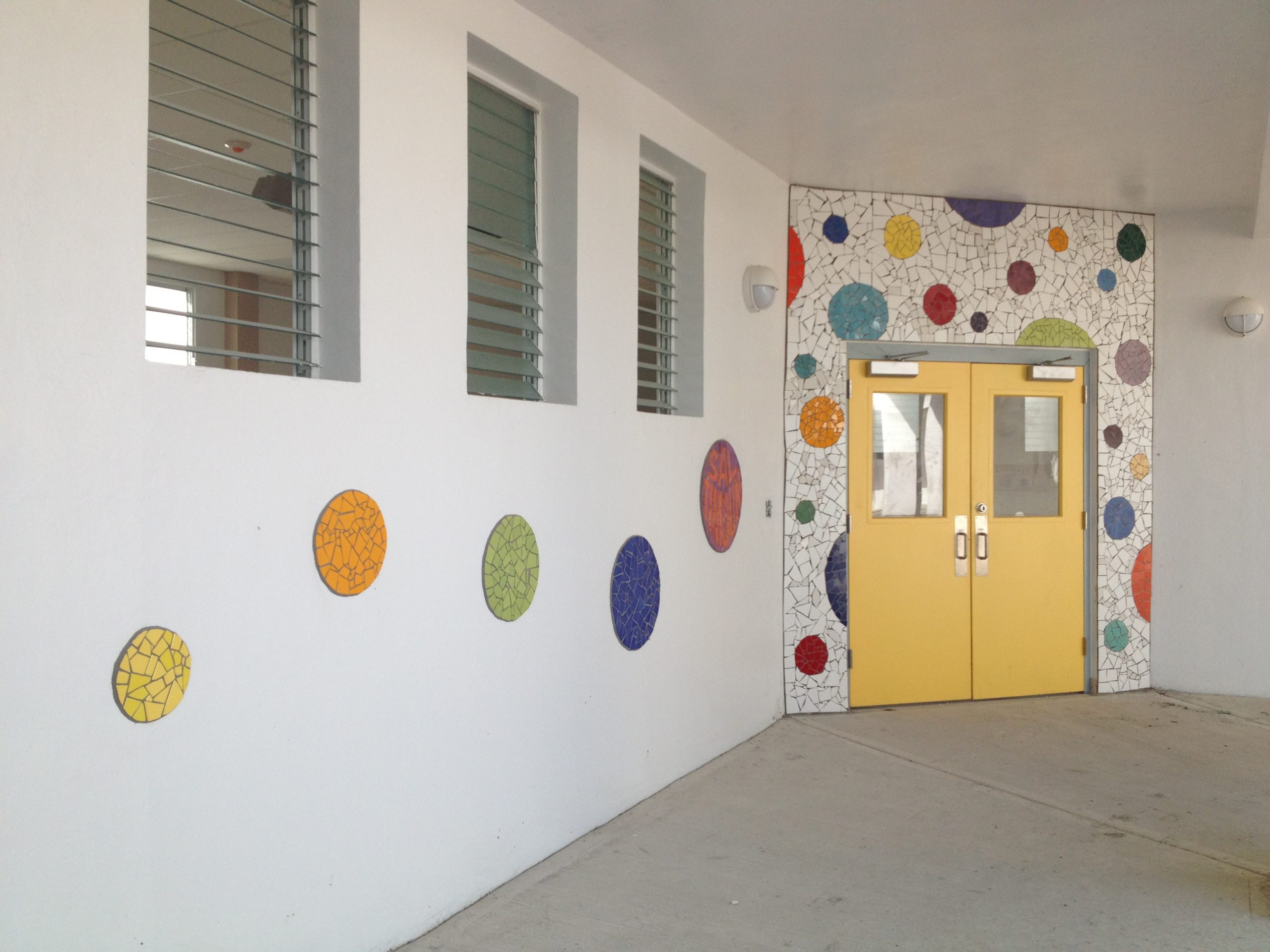 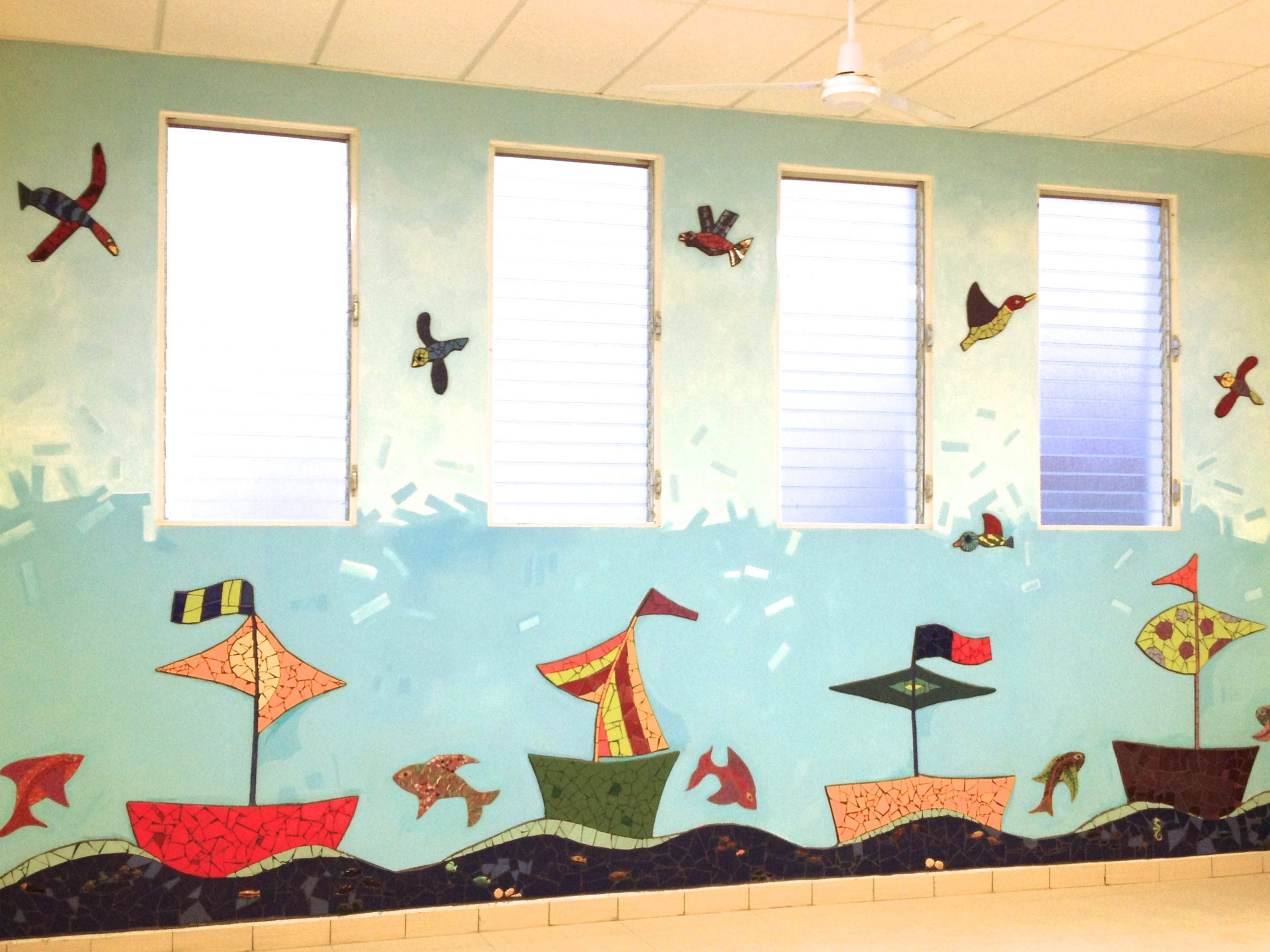 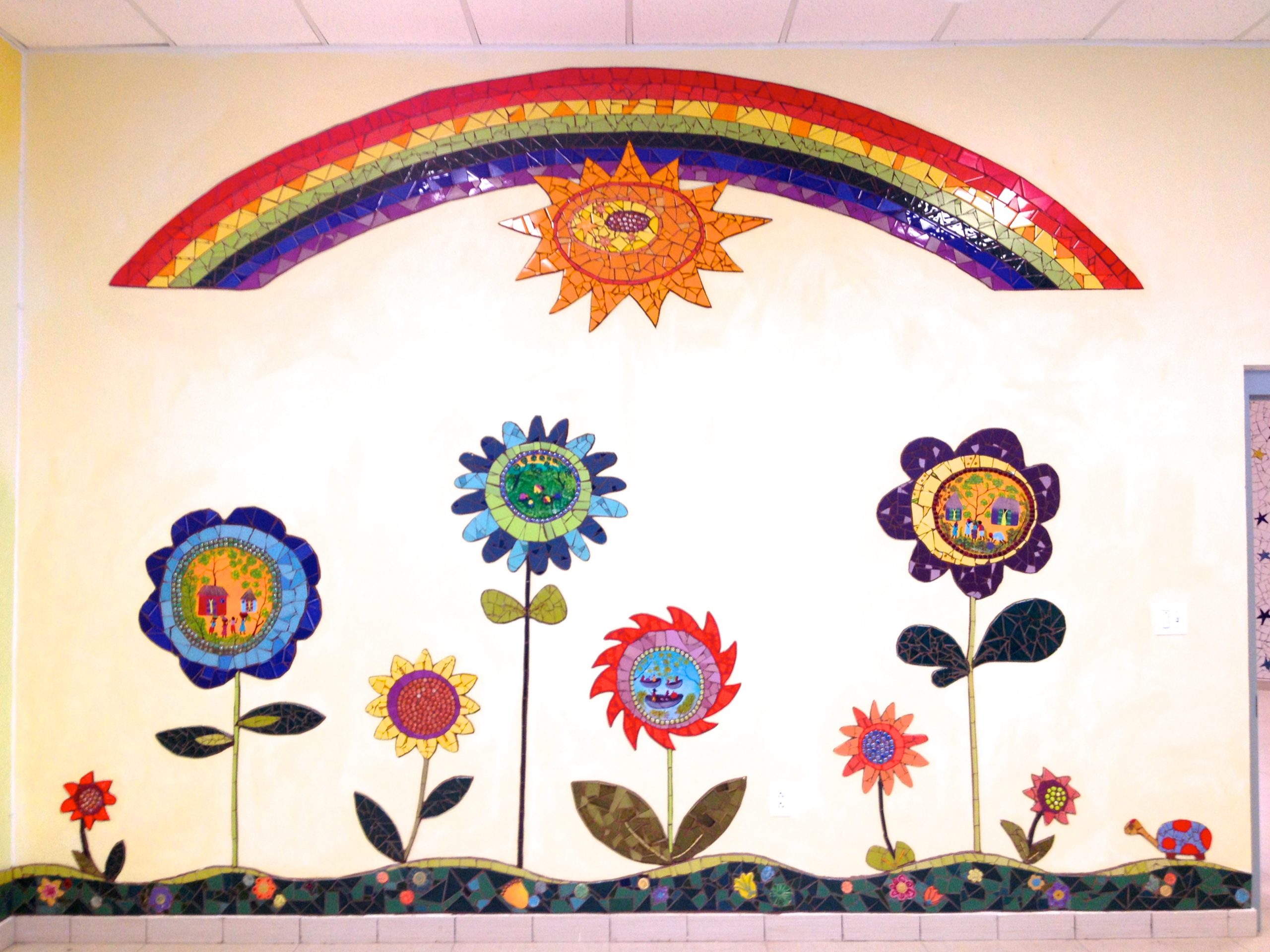 Creation of hundreds of square feet of mosaic artwork for the pediatric ward of the newly built Mirebalais Hospital in Haiti. Designs for the artwork were created by Laurel True, inspired by and adapted from drawings made by Haitian and American schoolchildren. The project includes 17 separate artworks in areas covering the inside and outside of the ward, including 10 murals in the main areas, four entry and exit surrounds, signage, detailing in hallways and murals covering the four walls of an attached playroom. Over 50 mosaic birds and butterflies fly in between the windows and over the beds.

Artist Laurel True worked closely with public health organization Partners In Health to plan the inclusion of artwork in the children's ward into the hospital. True had already completed three other architectural mosaic projects with her Haitian team in other parts of the hospital. The goals for integrating artwork into the pediatric ward were to inspire, engage and sooth patients, visitors and staff. Construction of Mirebalais Hospital began shortly after the earthquake in 2010 and continued for over two years. It is a state-of-the-art facility and the largest hospital in Haiti, serving thousands of patients who can not afford healthcare. The goal of artist Laurel True was to cover as much of the large ward as possible with mosaics, so that "every child in every bed could look up and see mosaics in multiple places". When under construction, the ward became studio space for Laurel True and her team, who created a mosaic wonderland that drew trades workers, builders and community members during artwork creation and installation. It became the most colorful part of the hospital and continues to be a focal point of the newly opened facility and have been lauded throughout Haiti and internationally.

After successful design and installation of a large mosaic mural and pavement inset at the entryway of the hospital, and a seating area in the community health waiting area, Partners In Health and artist Laurel True had a symbiotic working relationship. PIH leadership gave True free reign to design and decide placement of mosaic elements that would be integrated into the space. True trained a group of five Haitian men as her core production team, who worked on every part of the creation and installation of the project, receiving not only technical training in mosaic creation, but also professional development skills. These men have gone on to create their own company specializing in architectural mosaics called the Mirebalais Mosaic Collective. True recruited art teachers from Ecole de Choix in Mirebalais and Sunnyside School in LA to work with their students to create drawings to inspire the mosaic designs. True then recruited over adult mosaic artists from the US and France to assist in the creation of mosaic birds, butterflies, fish and stars, that would be sent to Haiti and installed throughout the ward. Al in all over 115 artists had a hand in the project.

"Training and working with the Mirebalais Mosaic Collective, Laurel True has created an uplifting space for our pediatric patients that brings together medicine and the proven benefits of art to transform the hospital setting into a holistic, healing environment…"- Dr. Maxi Raymonville, ED, Mirebalais Hospital. "Laurel True's work in Haiti has given Mirebalais Hospital not just wonderful mosaics that dignify our patients' surroundings....The impact of this project on the community of Mirebalais extends far beyond the beautifully-adorned walls of the hospital..." -Dr. Paul Farmer, Co-Founder Partners In Health