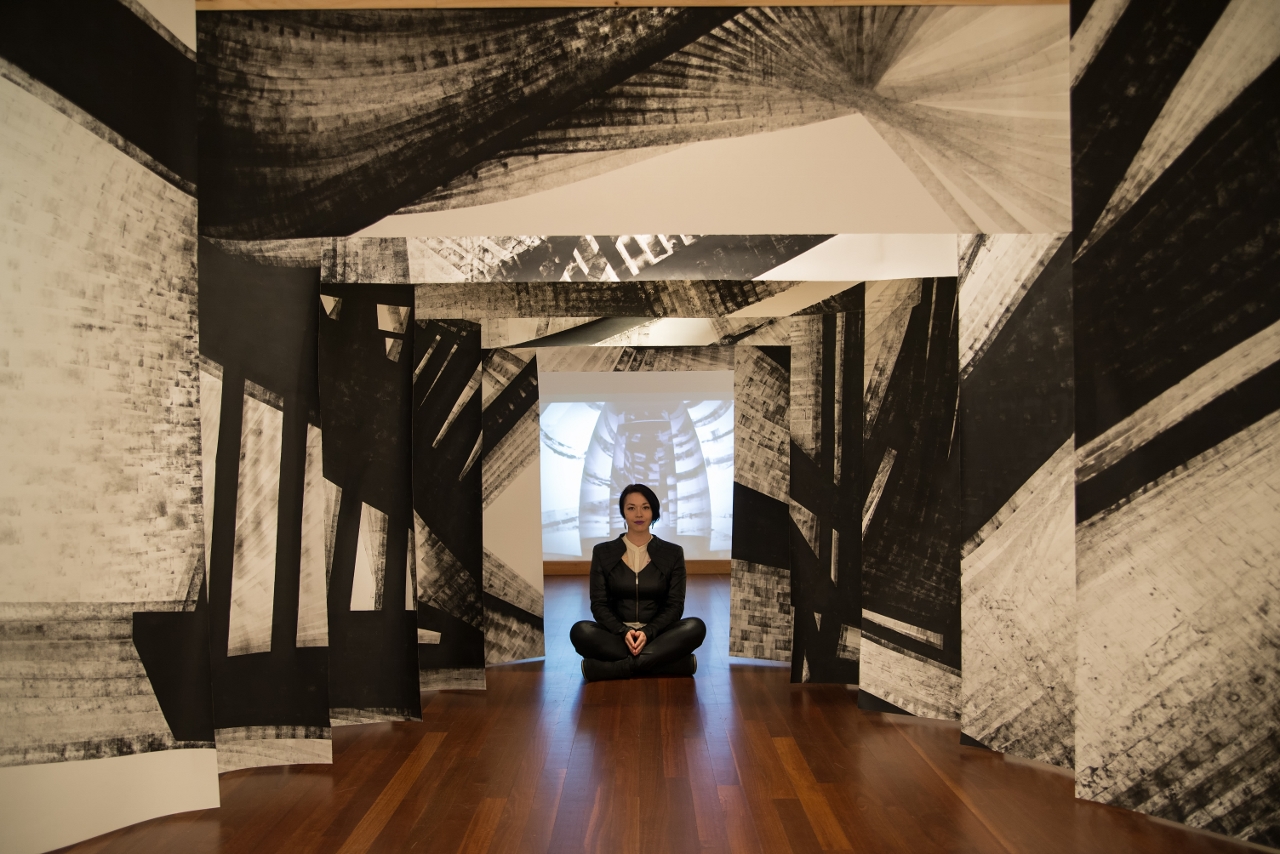 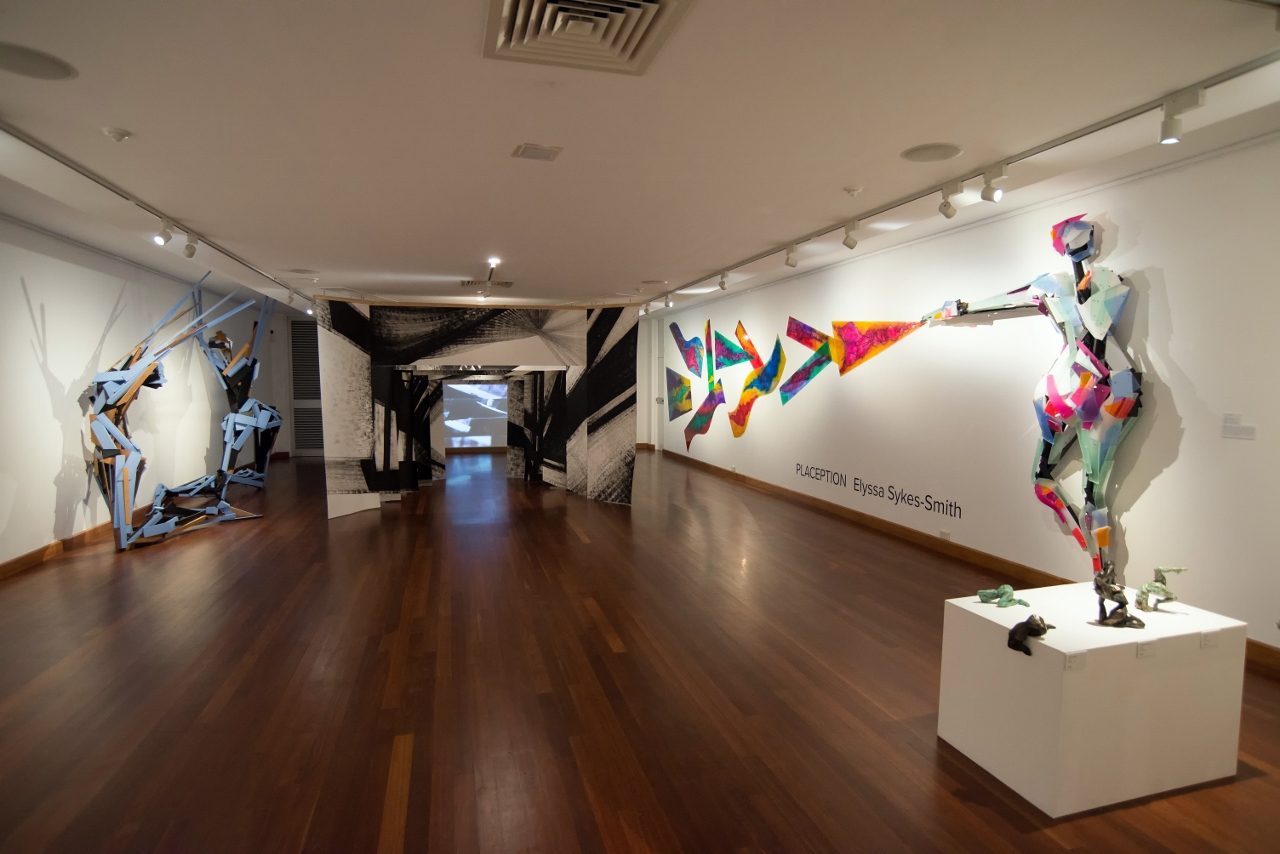 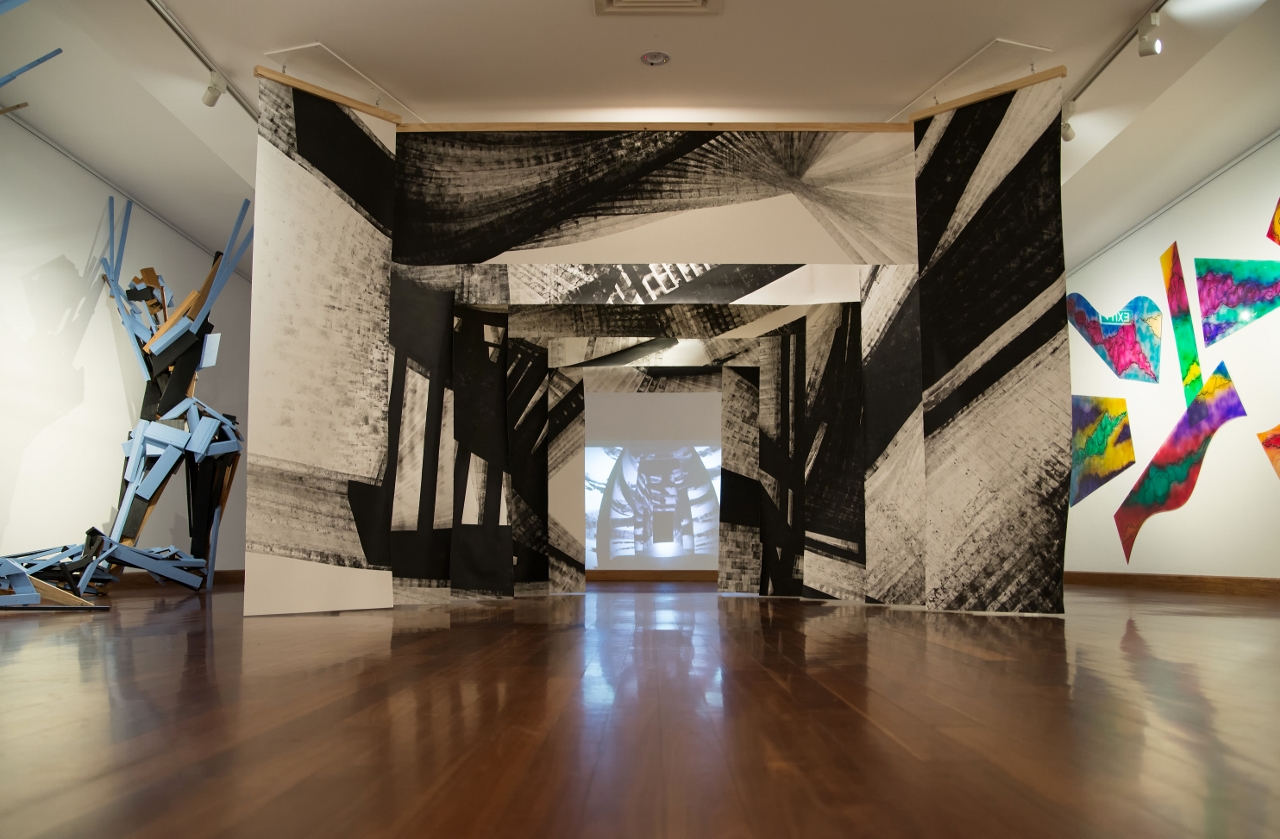 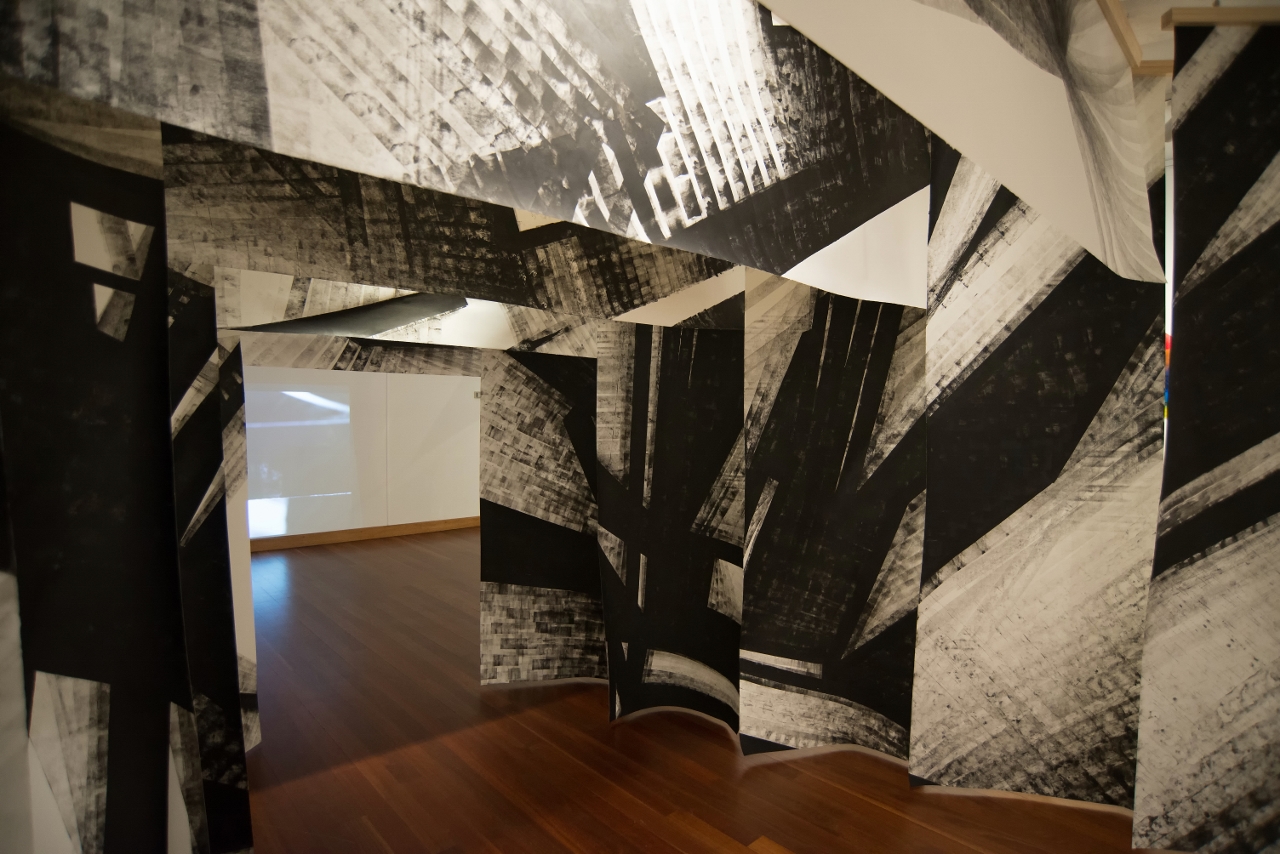 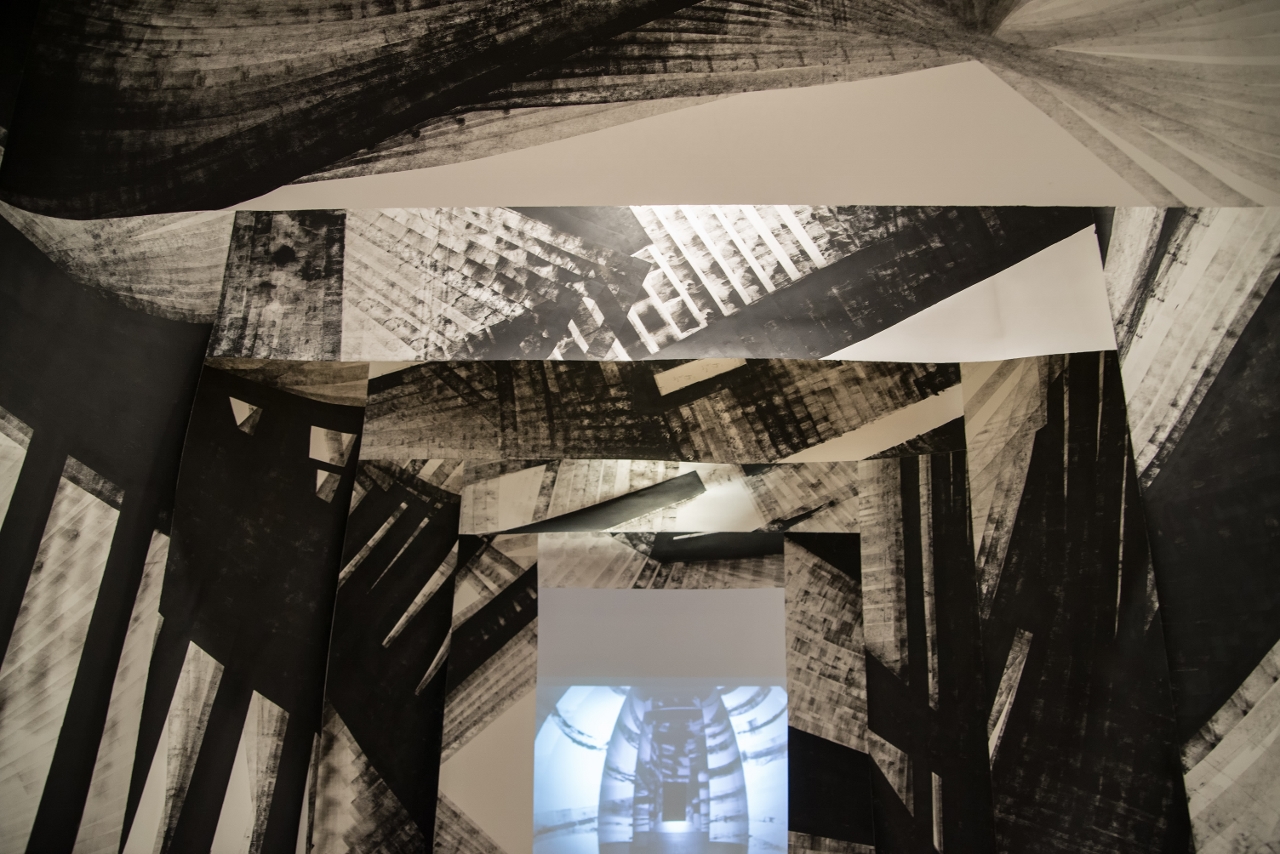 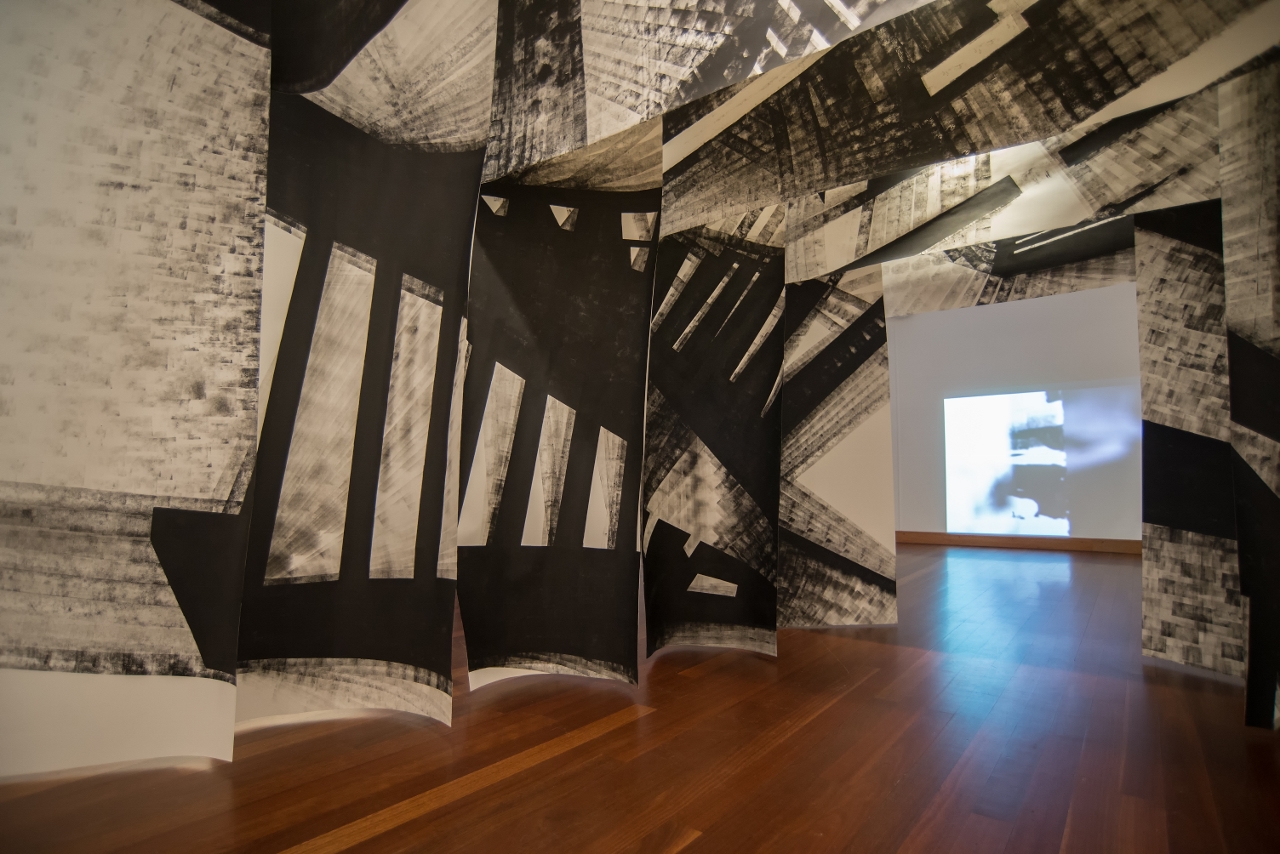 The Mind Walk 4 project was created in collaboration with students from Bomaderry and Ulladulla High Schools. The students were briefed to design and conduct their own Mind Walk performances working in groups at their respective schools. The photographs, audio and video captured during these performances were then used as inspiration and source material for the installation presented in the gallery. Thematically this installation explores the idea of a corridor, depicting distorted architectural forms and investigating the concept of a corridor in an abstract way, as a psychological space. This project encourages collaborative working including trust and empathy building exercises.

Mind Walks are sensory performances consisting of guided walking tours, visualisations and workshops with participants to facilitate intuitive interactions between the subject, others, architectural locations, psychological states and artistic material prompts. Through sight deprivation subjects have an opportunity to experience their other senses in a heightened state (i.e. sound, touch, smell), explore their environment from an altered perspective and access their imagination. The purpose of this project was to explore familiar places from an altered perspective and bring tangible form to intangible states of mind, aimed to empower the participant.

Elyssa Sykes-Smith was invited by the Shoalhaven Regional Gallery to have a solo show in the main gallery, 2019. Sykes-Smith utilised this opportunity to run a community engagement program, the Mind Walk 4 project with local schools.

The process of creating Mind Walk 4 consisted of creating a series of small corridor models based off the visuals the students presented; scrolls of paper were cut according to a design and were suspended; the drawings were created by direct light being shone through the corridor models using ink to record where the shadows fell during this process. The drawings were further developed with the idea to capture the feeling of those spaces and experiences of the participants, focusing on the transitory nature of a shadow and treating each line as an echo of an experience. The audio-visual component of the installation was created in collaboration Nigel Christensen. A model replicating the visual form of the final installation was created and filmed in, capturing an endless transition through the corridor and featuring textural drawing details. The audio incorporates vocals from the student participants, focusing on their perception of the spaces explored and their experience of giving over control. Sound being an apt medium to convey their experiences.