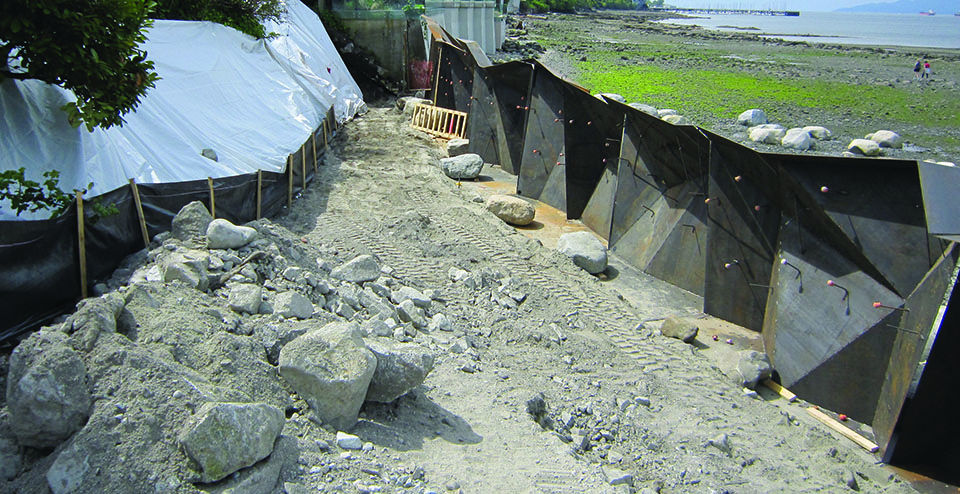 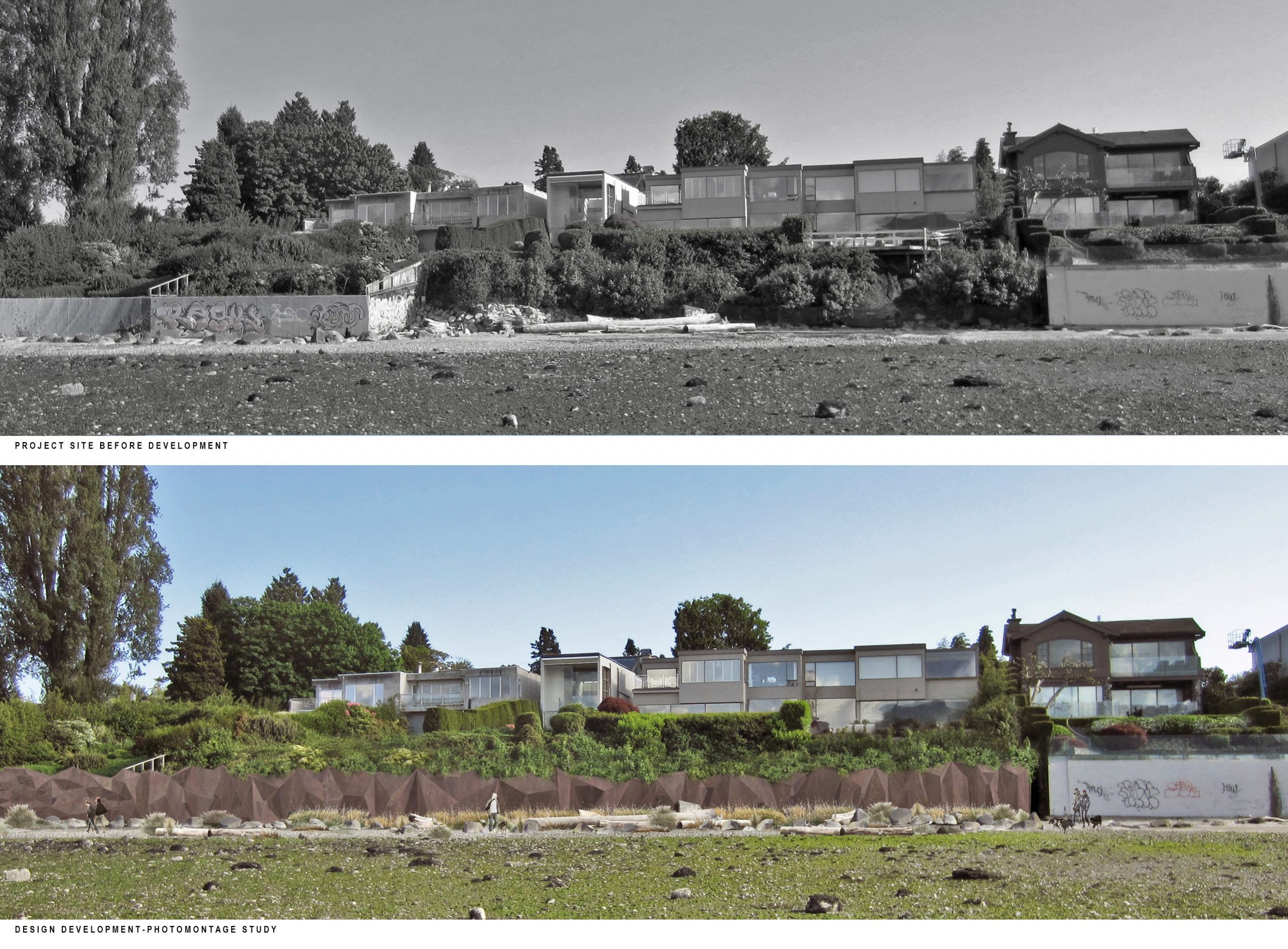 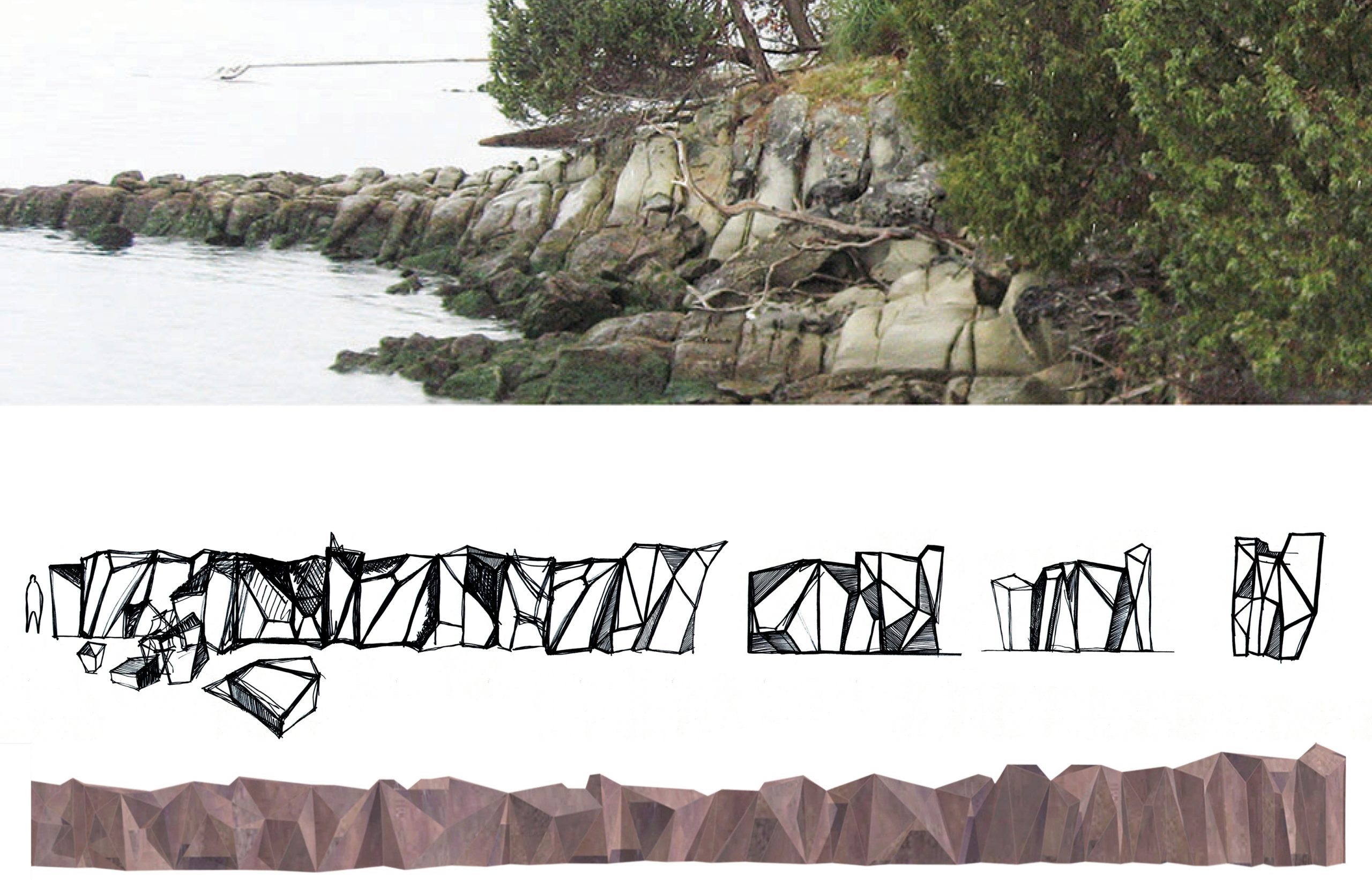 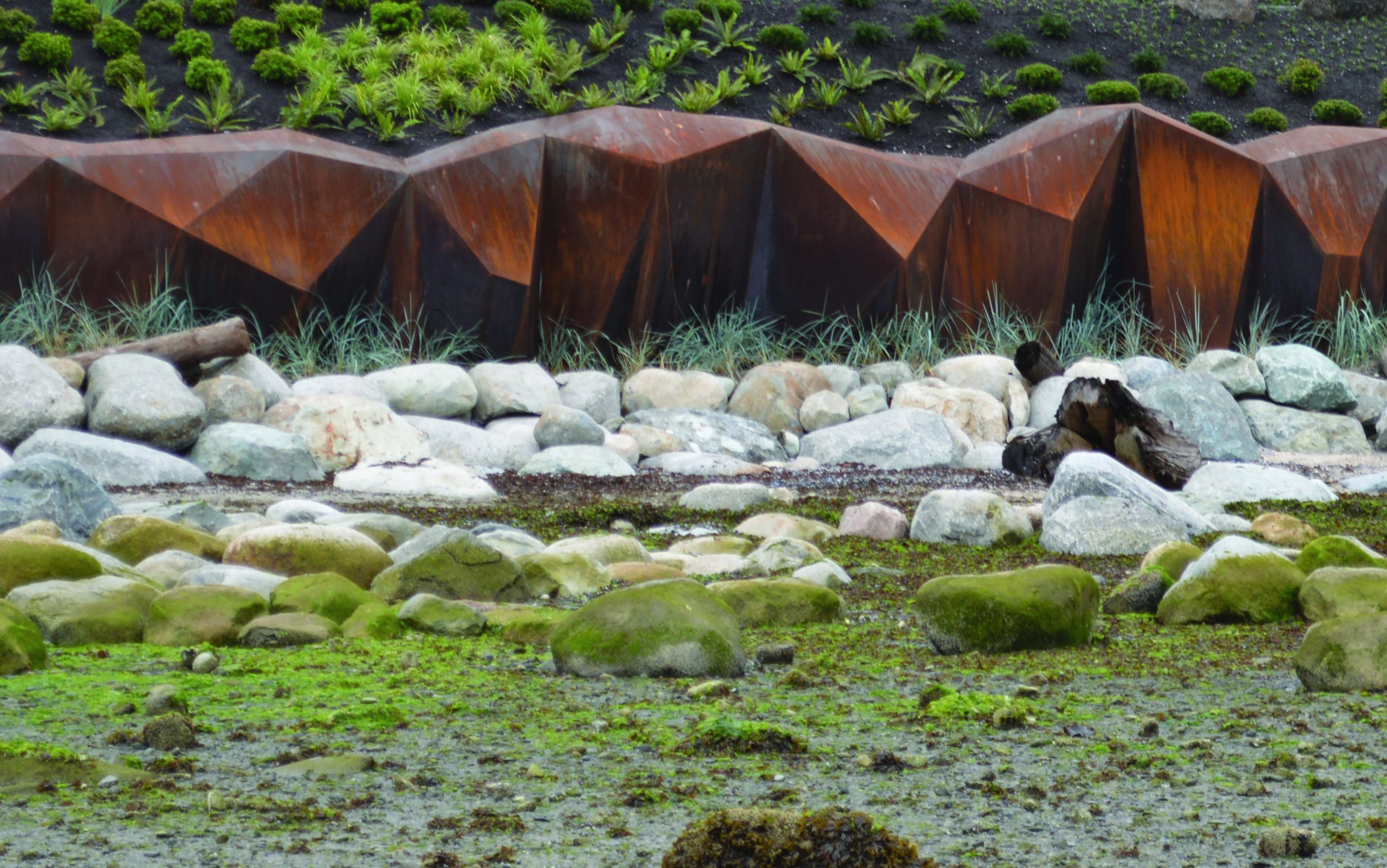 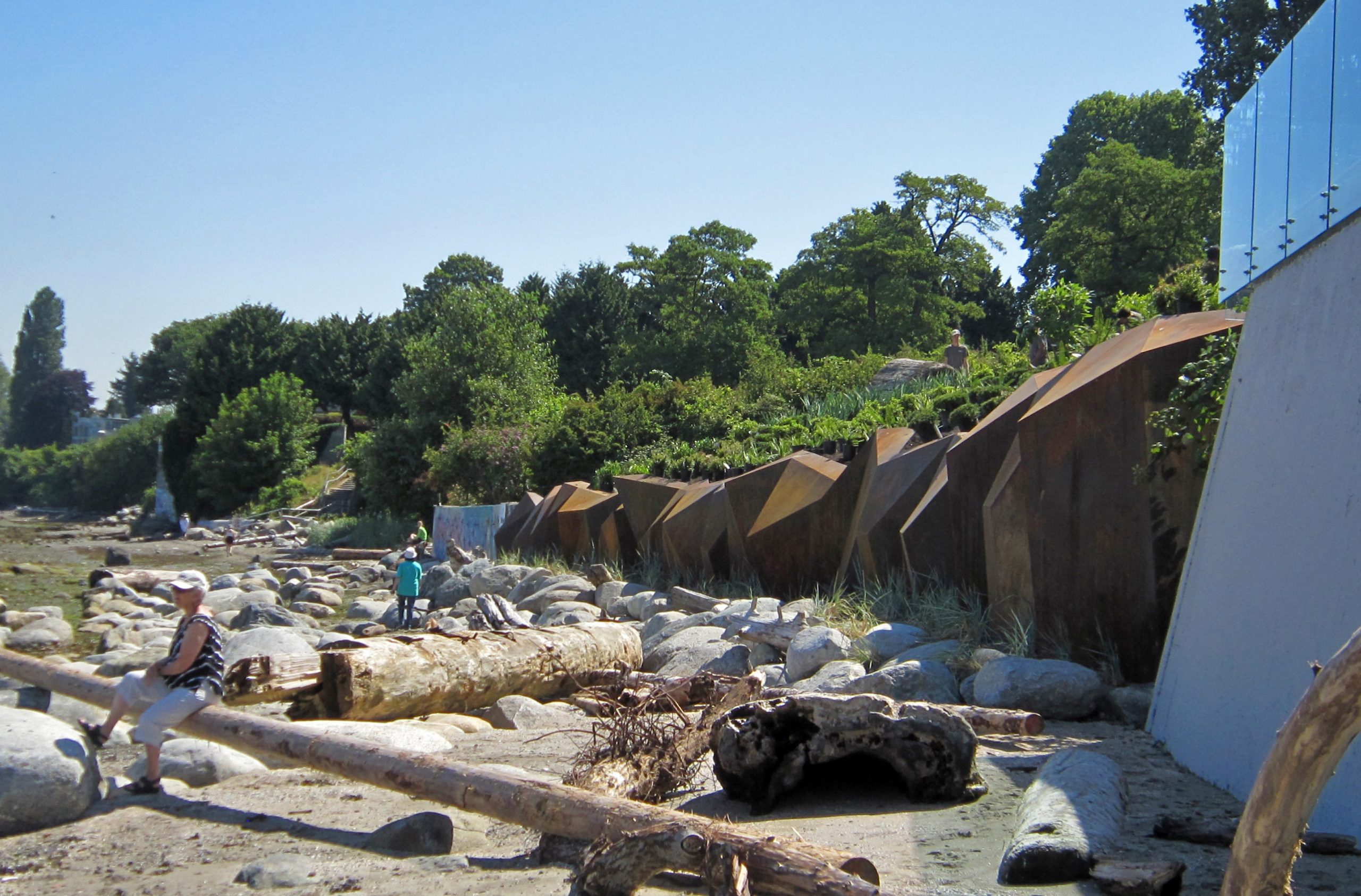 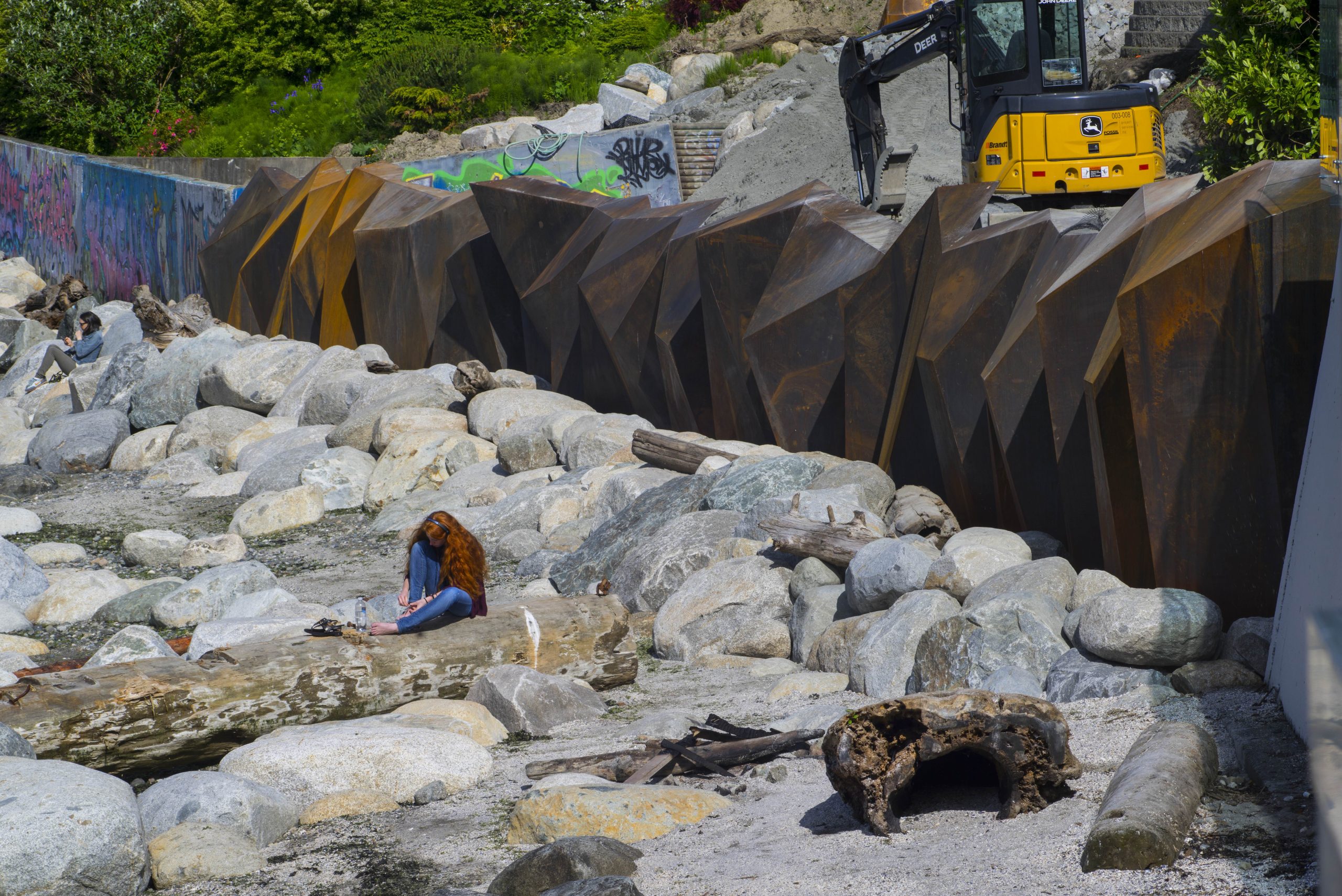 Metamorphous provides a unique solution for bank retention as a sculptural form while extending its scope to enhance the foreshore and create a stronger sense of place. The abstracted corten wall spans two hundred feet and in conjunction with strategic boulder placement along the foreshore, plays an integral role in dissipating wave energy and ultimately, facilitating the deposition of sand to create habitat for flora and fauna. Metamorphous has fostered a huge amount of public engagement on the beach, attracting kayakers, sunbathers, beachcombers and local residents. T

This project began with the King Tides, which struck the B.C. Coastline on December 2012. The firm of Paul Sangha Landscape Architecture was approached by a couple to provide a solution to their Vancouver property where the King Tides had carved out the entire bank, leaving the deck completely suspended. Previous foreshore experience had already proved that constructing oceanfront concrete walls resulted in foreshore erosion. Instead of opting for this common choice, the firm took this as an opportunity to create something unique and sculptural.

The firm worked with oceanic engineers to develop a solution that would not only enhance the foreshore but also deal with the retention of the bank. Using corten steel they drew inspiration from the abstraction of sandstone formations seen on Saturna Island in British Columbia. This also became the formwork on to which concrete was shotcrete, and as a result, the corten wall became an artwork that was at the same time functional. The abstracted shape of the corten, in conjunction with strategic boulder placement along the foreshore played an integral role in dissipating wave energy and ultimately, facilitating the deposition of sand to enhance foreshore and create habitat for flora and fauna.

The project was executed in 3 phases with the first being foreshore work. This involved an extensive permitting process and collaboration with environmental consultants, The Department of Fisheries & Oceans (DFO), Port Metro Vancouver & various departments at the City of Vancouver.

The second and third phase involved construction of the abstracted corten steel retaining wall. Physical and computer models of the corten steel were developed, with the computer model being fed into an automated water jet cutter in order to minimize material wastage. This process helped to simplify the complex forms. Time frames for construction were limited due to tidal fluctuations so all the panels were fabricated and pre-assembled off site in the metal workshop. The wall pieces were cut in 20’ segments and transported to site for final assembly. The corten steel façade became the formwork to which concrete was shotcrete, with a vision to retain the expression of the sculptural wall long after the corten façade disintegrates.

Since its completion, the corten wall has fostered a huge amount of public engagement on the beach, attracting kayakers, sunbathers, beachcombers and local residents. Dune grasses are beginning to establish and sand is slowly depositing. The development and execution of the wall illustrates the first of such an endeavor along Vancouver’s waterfront. The wall shines as an example of both functional and accessible art that is helping sculpt an identity for Vancouver’s shorelines.