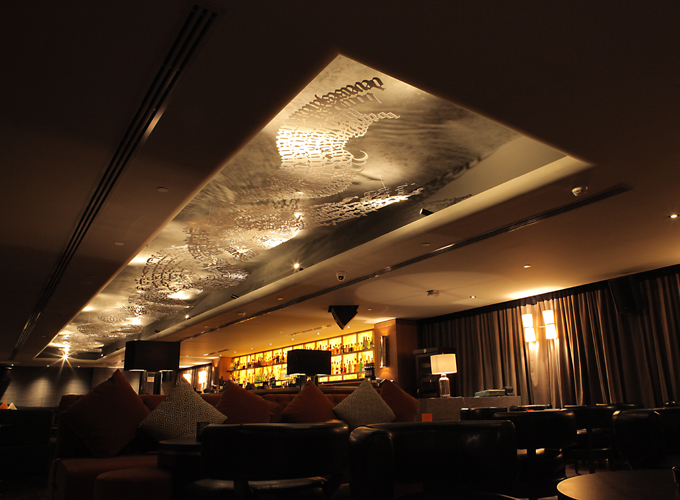 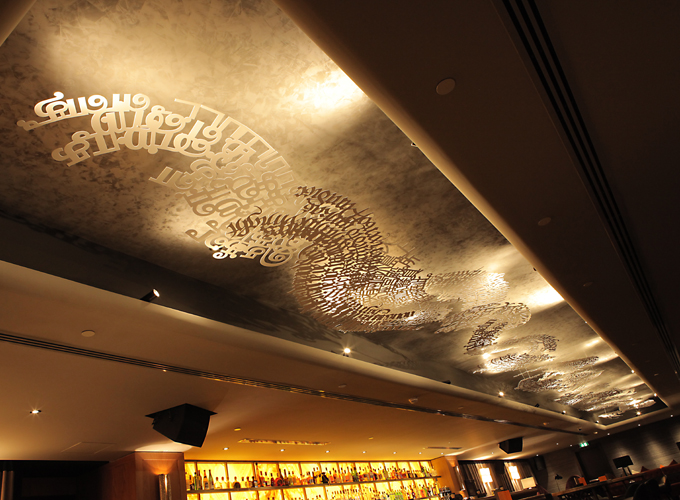 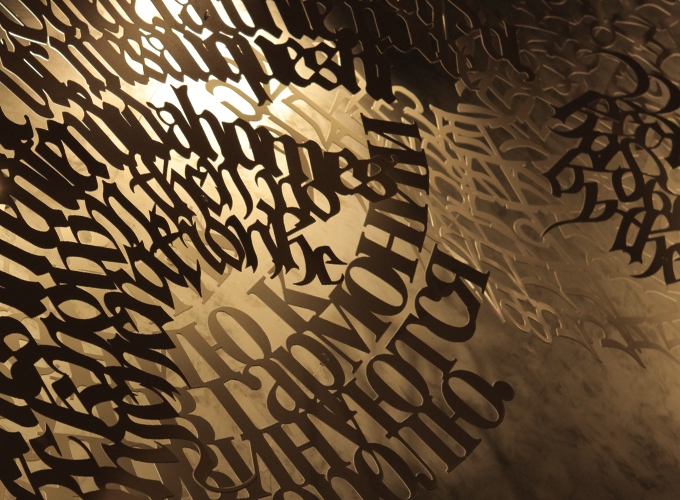 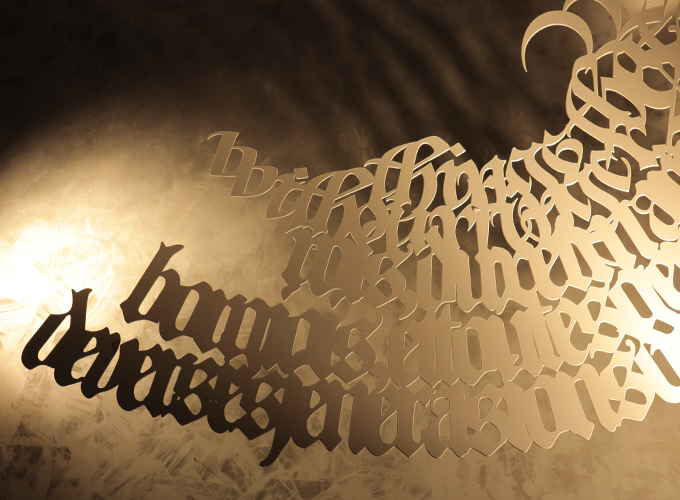 A hanging sculpture welcoming guests to the lounge of the China Grill restaurant. This word sculpture is made from the journals of Marco Polo, who is at the heart of the restaurant’s brand story of fusing Eastern and Western flavors. The words of the journal have been translated into the native language the text describes, creating a tapestry of interwoven cultures illustrating Marco’s journey from Europe to China. The structure is made of nineteen laser-cut aluminum panels powder coated white and suspended in a pop-up ceiling that measures 20 meters long by 2 meters wide by 40 centimeters tall.

The sculpture acts architecturally as a guide from the entrance to the dining room. The prominence of its light design transforms it into a beacon that defines the mood of the lounge space. Its scale and size acts like a map made of flying, woven languages, taking the viewer on a journey of their own visual discovery as they walk under its expanse. Its form references waves of oceans, rolling sand dunes, and the mountain ranges that Marco Polo traveled through along his journey. Words documenting the places seen become reflections of the content they describe, where words themselves define the landscape. Guests will travel the world with their eyes before they reach their plates to taste the same fusion of East and West with their mouths.

This process began by working with literary researchers to edit the original text of Marco's journal to define the regions that were visited. The original Old French was then translated into 9 languages to reflect the different countries along his journey (including: English, Arabic, Chinese, Mongolian, Hindi, Japanese, Russian, Tibetan, and Tamil). Sketches were then transformed into digital models to resolve the structural design and appearance within the interior designers rendering. The final vector artwork was then laser-cut out of (1m x 3.5m) sheets of 1.5mm aluminum, powered coated white. A CAD file was supplied to local contracts in order to attach needed nylon suspension cables at specific pre-determined locations in the construction of the ceiling to insure easy installation.

The scale and permanence of this sculpture creates a platform to tell stories with words that do no require to be read literally rather then felt visually. When language becomes an object, a beauty is revealed that illustrates both the contrast and parallels of world cultural identity that unites and divides us. Letterforms have a unique expressive form with origins in different specific cultural histories, yet they all share the same goal of searching for understanding. This sculpture explores the universally human desire for discovery and adventure into the unknown that is still alive in this modern age of interconnectivity.