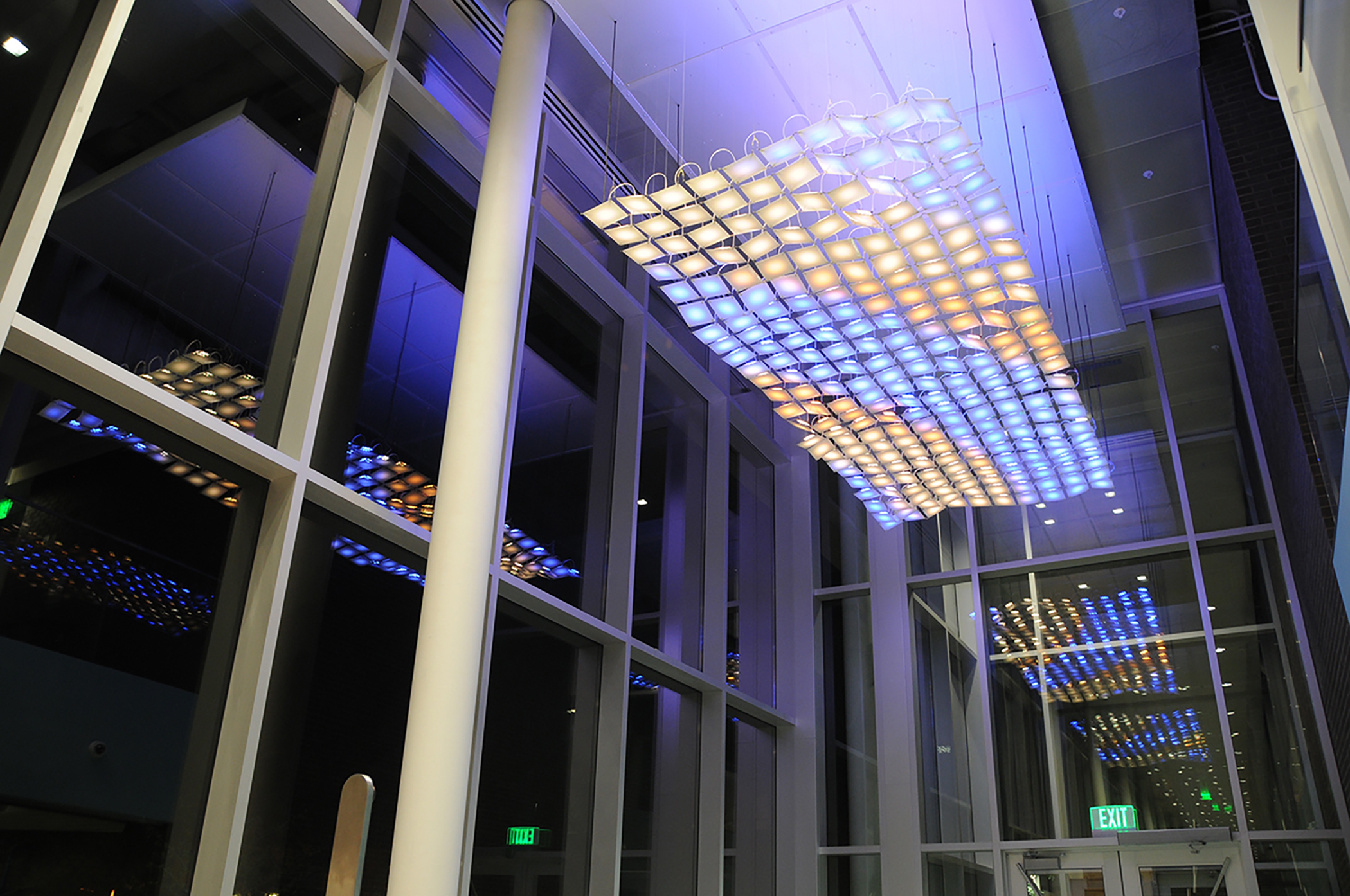 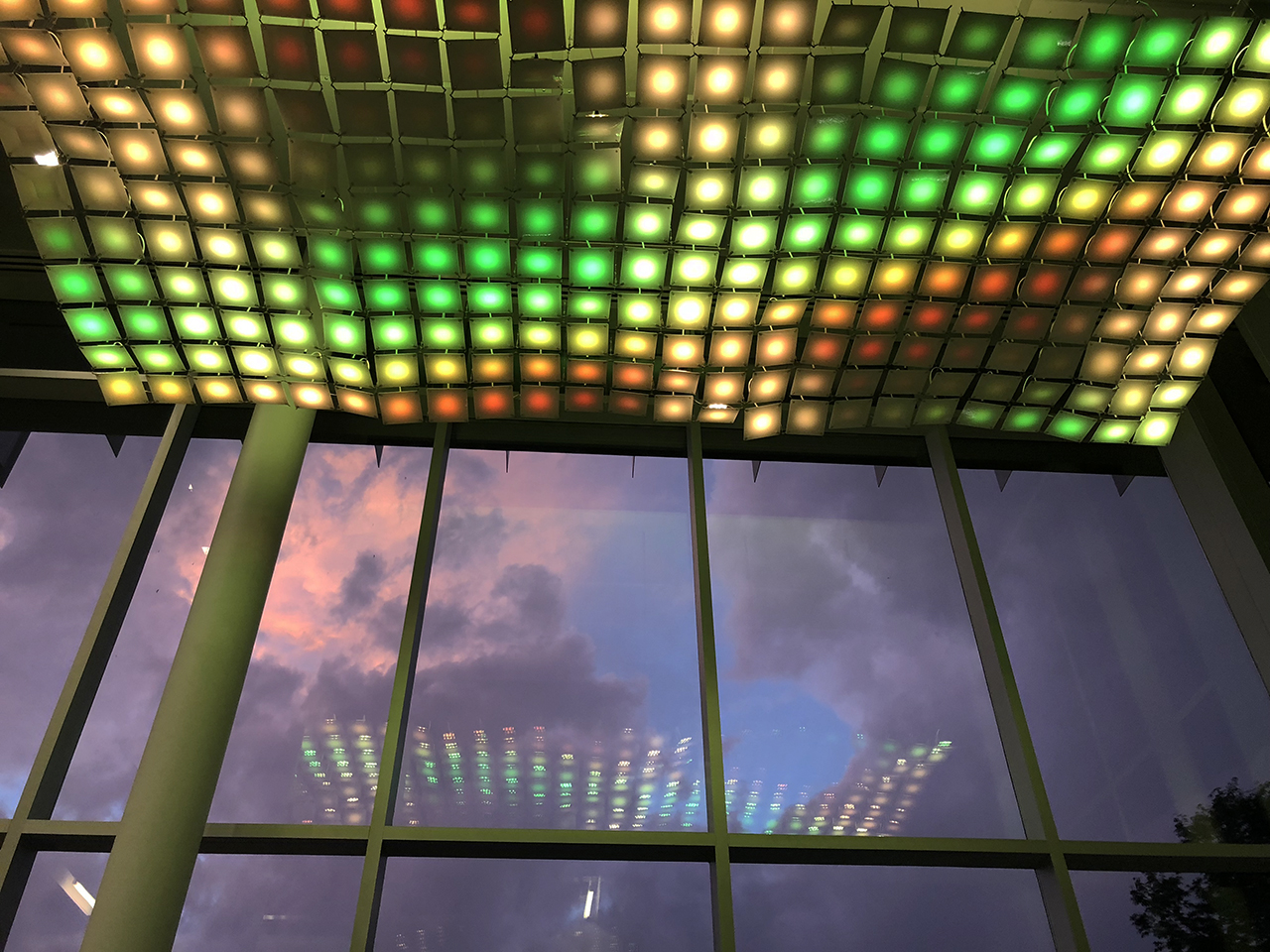 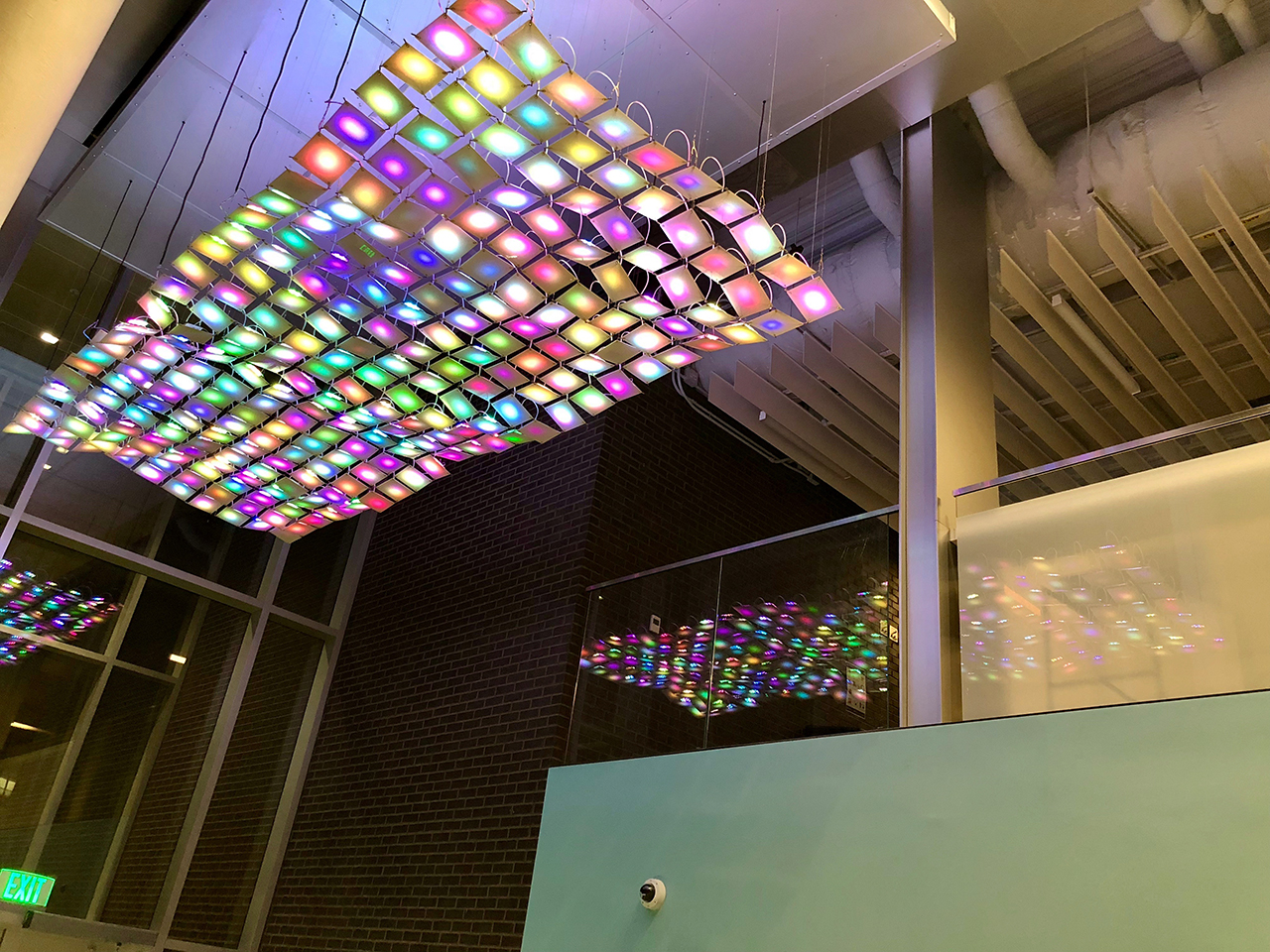 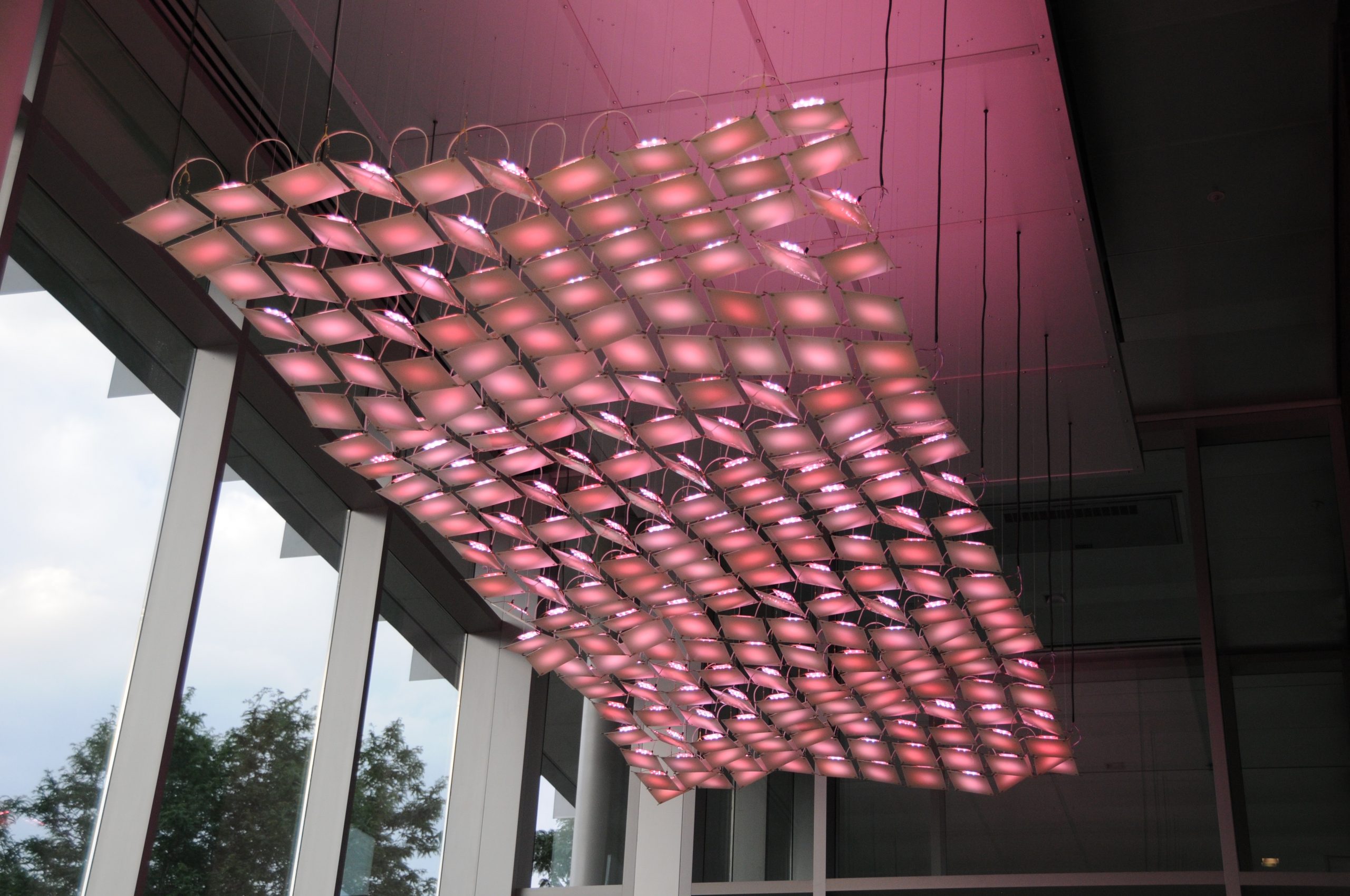 The Colorado School of Mines was constructing a new building to educate the next generation of scientists and engineers. Kinematics Labs designed a suspended piece for the entrance that utilizes advanced ceramic tiles and LED’s to create a dynamic artwork that modulates its form and generates abstract patterns of light based on radiating waveforms. The evolving color patterns and transforming shape creates a warm and energizing entrance to a place where students will be asked to push themselves and think creatively. The piece is entirely custom manufactured from alumina tiles, pc boards with LED’s, motors, pulleys, cables and aluminum panels.

The CoorsTek Center for Applied Science and Engineering was largely funded by CoorsTek, the world’s largest manufacturer of high-tech ceramics, which is also located in Golden, CO. The commission specified the use of CoorsTek ceramic materials in the final sculpture as a way to connect the company with creative thinking and to further explore the artistic potential of their ceramic materials. The project was inspired by models of complex geometric surfaces that led us to develop the innovative way of linking the tiles in a grid, allowing the suspended plane to be transformed by selectively raising and lowering some of the connection points. The fact that part of the CoorsTek Center would be housing the Physics Department meant that the waveforms we were creating would make a connection with some of the scientific activity happening in the building. By adding LED’s behind each board, the concept of waves radiating out from different points could be further elaborated upon since we could program the piece to generate patterns that are regulated by sine waves modifying hue, intensity and saturation. There are more than 30 different sine waves that help control the visual effects.

Our collaboration began with a factory tour of two CoorsTek facilities that made everything from makeup applicators to ballistic armor for assault vehicles. We observed the various manufacturing processes and were told that we could either utilize existing products for our piece or design something new. It was in a bin of scraps that we found a beautiful cylinder made of very pure alumina. When we shone a light through the material and the whole object glowed: the seed of our idea was formed. We worked with their engineers to learn about manufacturing possibilities and constraints, ultimately deciding on a square-shaped tile of 99.95% pure alumina that was optimized for its thinness, durability, light transmission, and a beautiful bone-white color.

A critical part of the sculpture was the electronics and programming. We worked with two very experienced colleagues: David Williams (hardware) and Fiid Williams (software) who were able to execute extremely robust designs where multiple streams of identical data and repeating segments of LED’s created redundancies that would compensate for the kinds of failures we had observed in other off-the-shelf systems.

To make the work more interactive, we utilized a camera that allows the piece to respond to the presence of viewers whose movement and behavior would modify some of the patterns. We love the idea of a hidden surprise in the sculpture where someone’s actions are reflected in the artwork. It creates a connection to the art that is only forged when the viewer takes a moment to contemplate what they are seeing. And then they can share this insight with their friends.