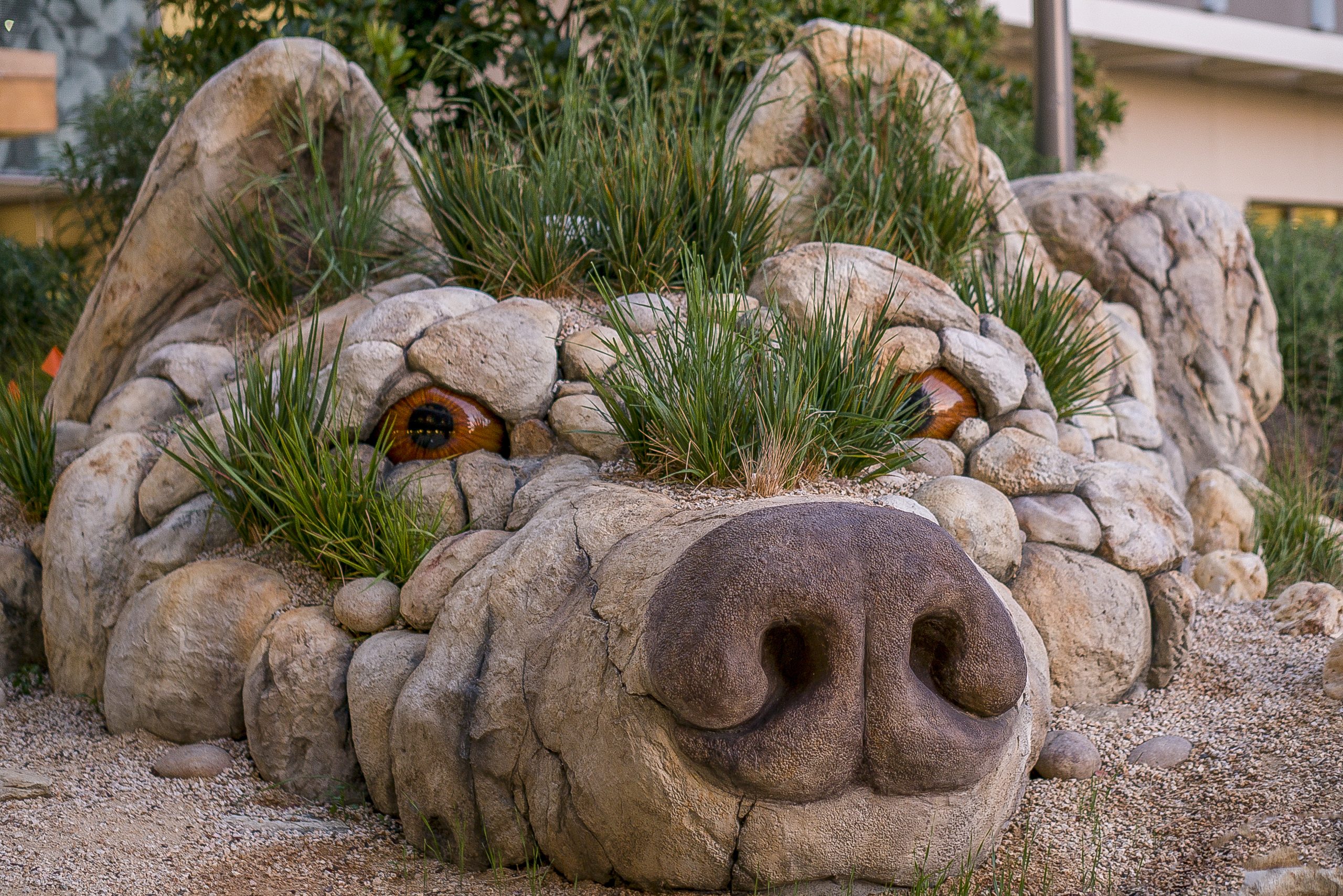 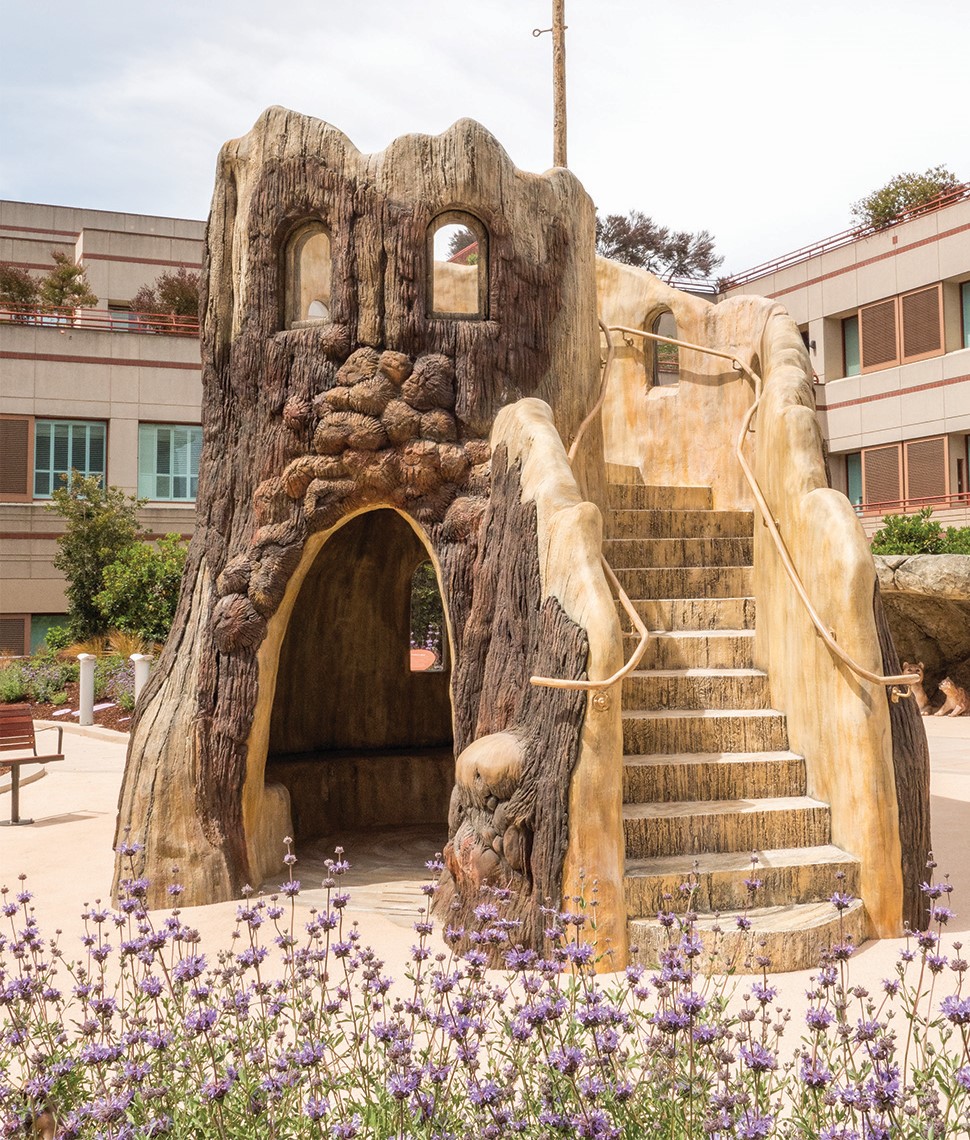 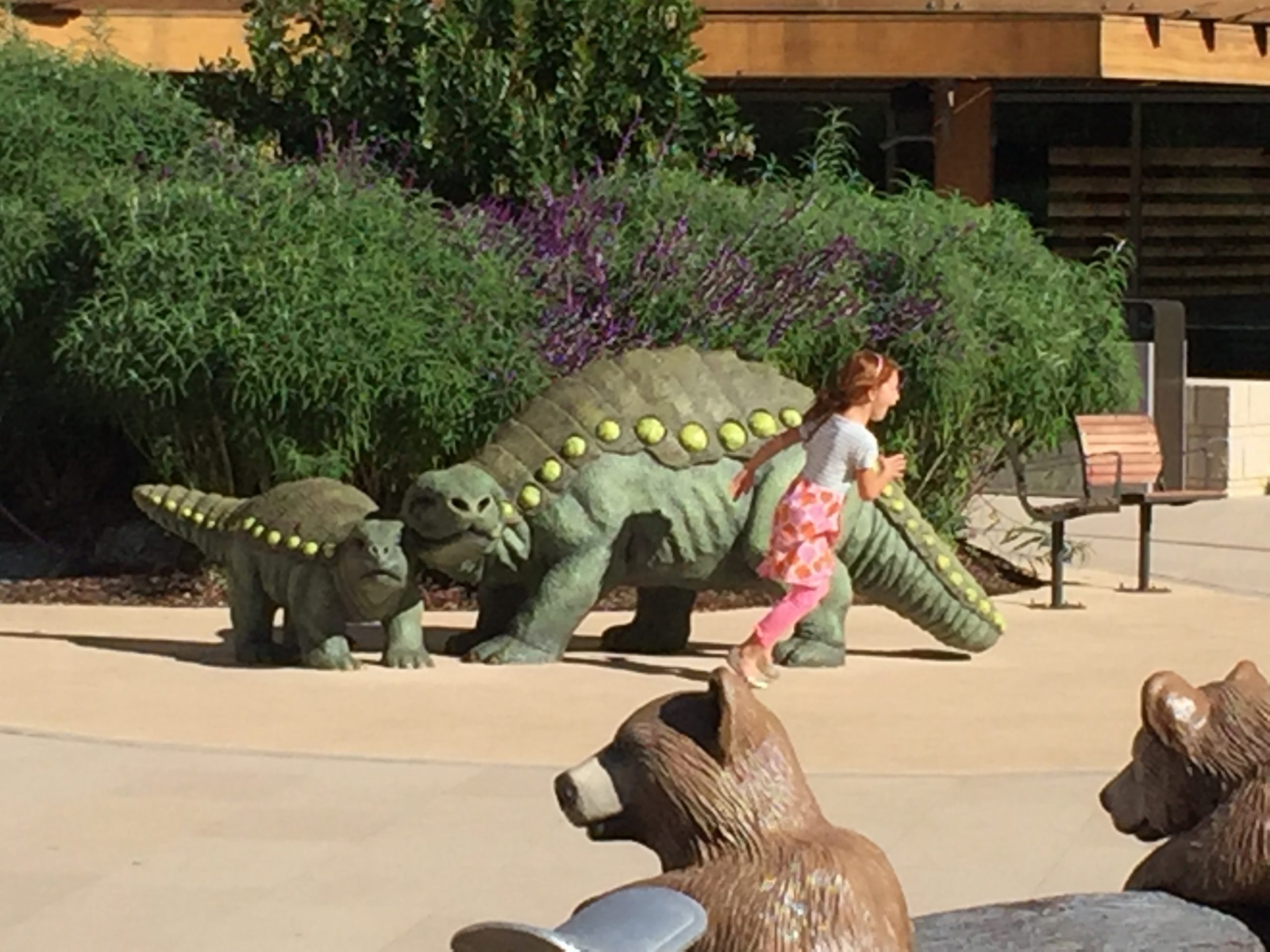 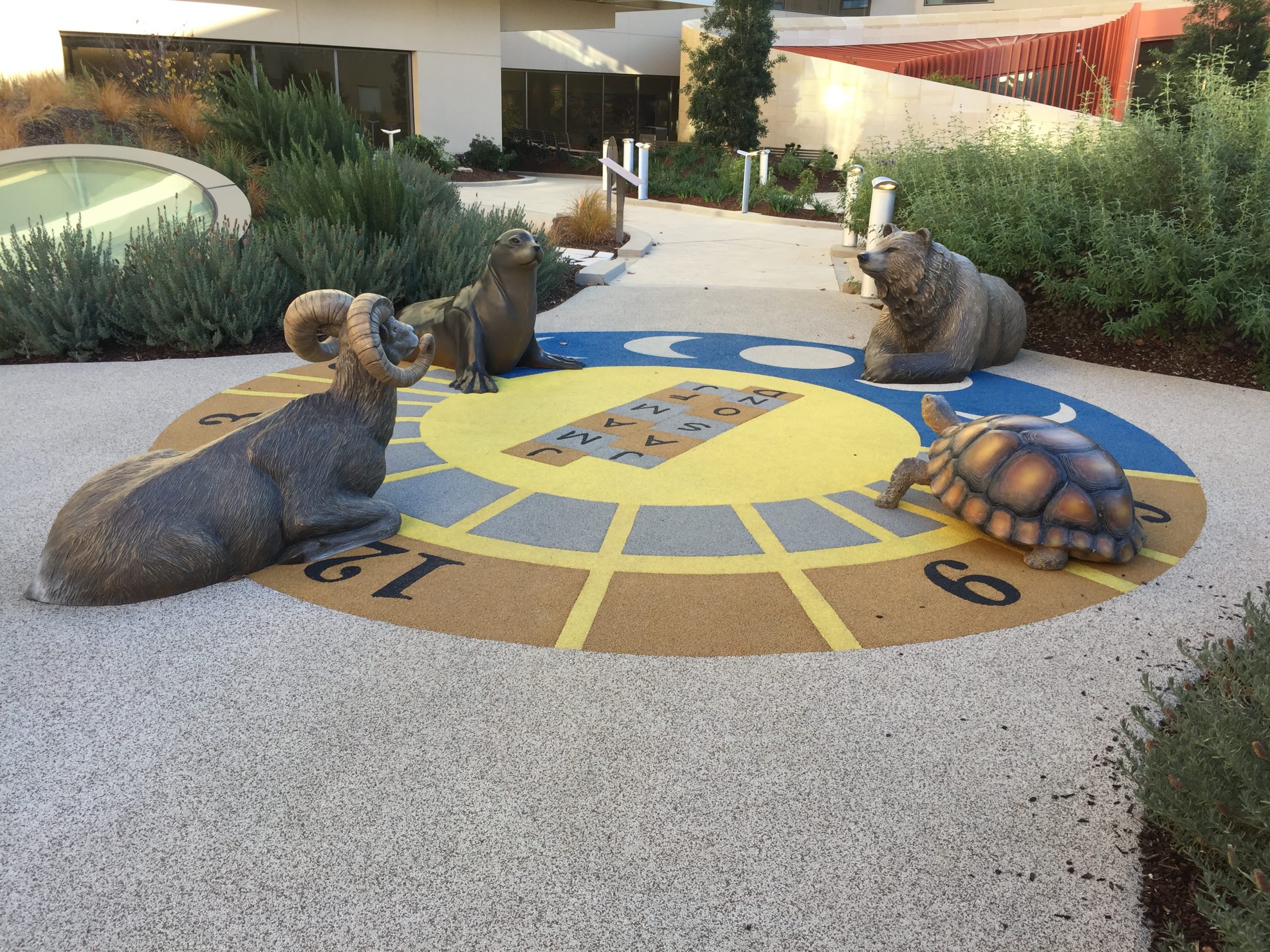 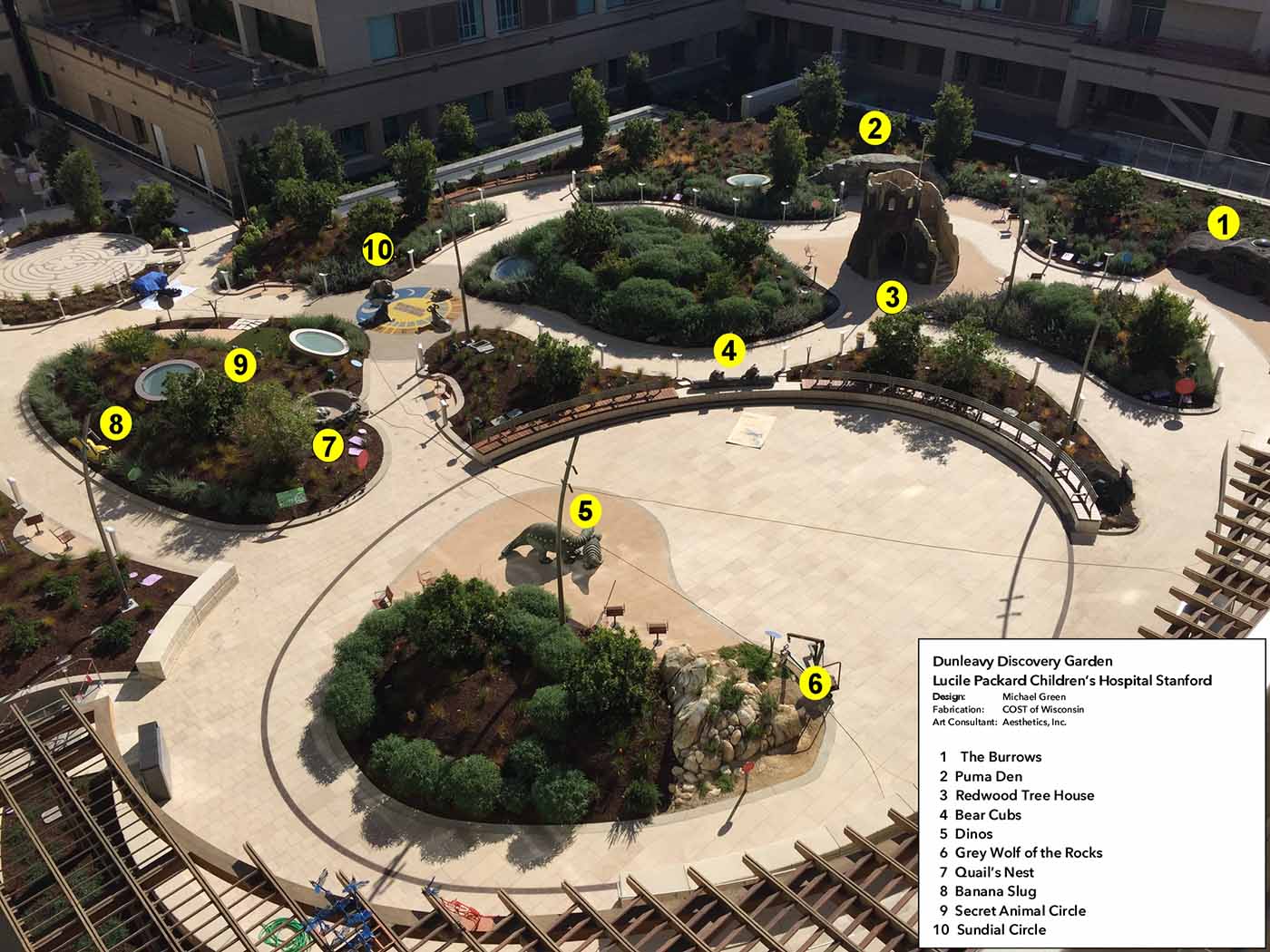 This 20,000 sf children’s roof garden is full of artwork, one of two artist-designed active areas for children as part of Lucile Packard Children’s Hospital’s 2018 expansion. As art consultant, Aesthetics, Inc. was liaison with the owner and project managed the art in the garden from concept to installation. Artist Michael Green was selected to create design concepts for child-friendly artworks, which were developed, fabricated and installed by COST of Wisconsin.
The design extends an internal art and wayfinding theme of the hospital first floor, “The Redwood Forest” and consists of 10 art exhibits located along winding pathways of the garden, each waiting to be discovered around a corner. The artwork includes a 14’ diameter hollow redwood tree, a puma den, gopher burrows with a tunnel for kids, a 9’ banana slug and a large sundial surrounded by a council of animals. Didactic information about animals in the redwood forest are included, including those of the California Brown Bears depicted, now extinct in the wild.

The intention of the project was to create an entertaining area for children who are patients, visiting families and hospital staff. A part of the garden also serves as an outdoor dining area for the adjacent hospital cafeteria. Seating areas adjacent the artworks allow parents to watch their preoccupied children, often while having private discussions and phone calls regarding their hospitalized child. The design of the garden was designed with the concept of discovery, where each art exhibit is concealed from views across the garden and need to be “discovered” as one turns each corner. Animal footprints were sandblasted into the stone pavers between each exhibit, helping lead kids along and leaving a hint of what animal might be found next. All animals depicted are native species from the California redwood forest ecozone, even an endearing mother and baby dinosaur representing ancient critters who roamed this area of California. Care was taken to depict animals accurately rather than as cartoon caricatures, with the knowledge that love of real animals is common to all age groups.

Michael Green was selected by the hospital’s art committee from a number of artist candidates introduced by Aesthetics. COST of Wisconsin was similarly selected and produced scale models, fabrication drawings and engineering for most exhibits.
As art consultants, Aesthetics acted as liaison between artist, owner and architectural team, helping guide the artist’s design conformance with playground safety codes and coordination with architectural, structural, landscape and civil engineering issues. This was an extensive process over a period of 8 years, beginning in the architects’ design development phase and continuing through construction documents, engineering, building construction and artwork installation.

This is a roof garden, and the location of the garden on the hospital roof over its expensive operating rooms had fastidious waterproofing implications for artwork anchorage and coordination with roof drainage. The weight of the various art exhibits –up to 35,000 pounds—also had significant structural engineering logistics which needed to be coordinated. As art consultant, coordination was also necessary by Aesthetics with the landscape architect for planting around the art exhibits, playground safety rubber, paver embossing, exhibit placement and other issues.