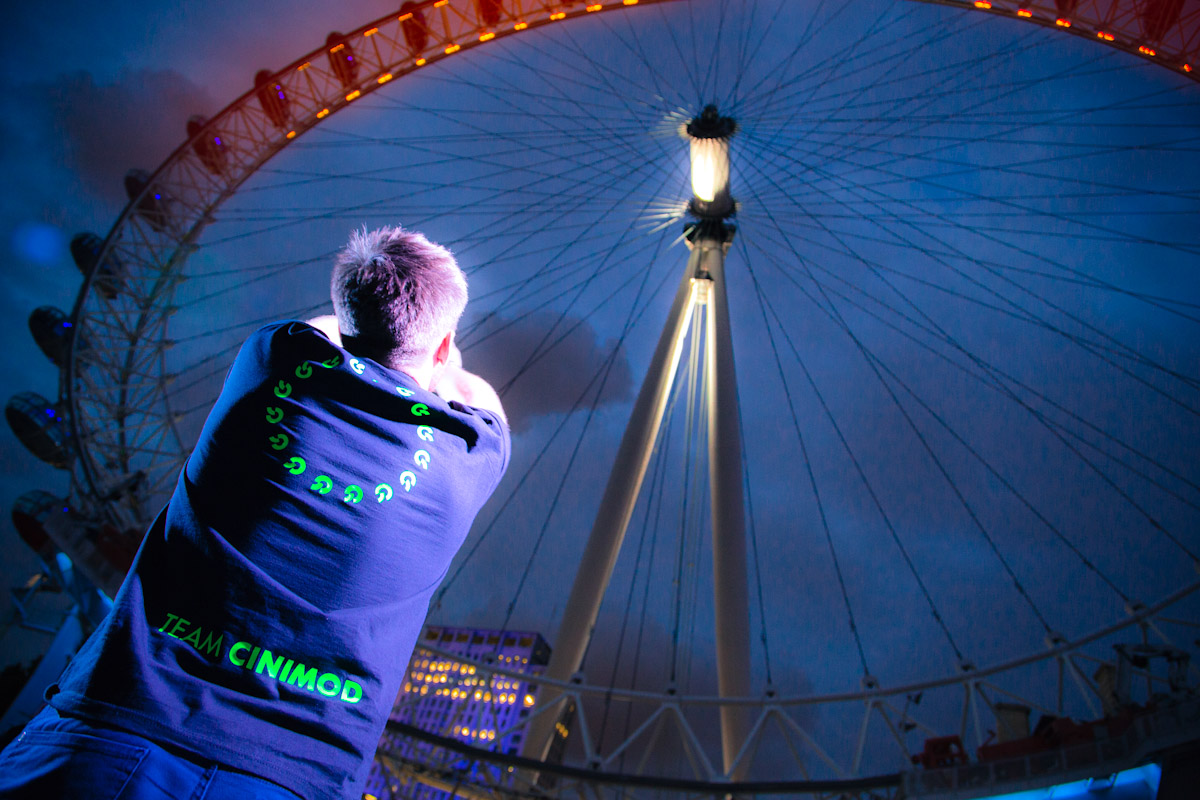 The Mood Conductor was an interactive installation enabling a single user at a time to be empowered to express their mood on an unforgettable architectural scale. It was the first time a large public landmark within London has been controlled directly by members of the public.
There were two ways in which the performer could interact with the system: first by using their arms and hands, and secondly, at more subconscious level, though their heart rate. The gesture recognition system allowed for free and unconstrained movements to be interpreted into beautiful lighting movements that amplify the user’s mood.

The goal was to create lighting patterns that are visible across the London Eye which are a direct result of the movements and behaviours of the user. The result was patterns varying in colour, speed, brightness, and scale. At times the London Eye can be seen to sparkle with obvious joy and celebration, other times it recoils into a subdued and disappointed state. The lighting show amplifies these action and moods of the user for the whole city to see.
The heart rate system used a sensor clipped to the performers ear to detect their pulse. The symbolism of the heart as an epicentre of felt emotion is not merely an artefact of mythology and early philosophical thinking. Whilst there is no evidence of hearts skipping beats at the sight of a loved one, we can be certain that the beating of our hearts is inextricably linked to the way we feel. By measuring your heart beat as you stood on the Mood Conductor podium, the system gets an even better idea of your mood, and consequently the lighting show which you create on the EDF Energy London Eye becomes even more responsive to you, and the way you feel.

The systems were designed and produced by Cinimod Studio specifically for the Energy of the Nation experiential activation. The project developed into a highly complex and intuitive ground breaking interactive installation that challenged preconceptions of how users of a city live and influence the space around them. By inviting the public to express their mood on such a public scale there is a simultaneous sense of liberation and social sharing.
The existing Philips LED light fittings on the London Eye are retained as the primary lighting. Previously there has never been any demand to show accurately mapped lighting across the London Eye and hence there was no system available to ensure that the lighting was always the right way up on the rotating structure. Cinimod Studio, and their specialist electronics engineer White Wing Logic, designed, and implemented a new gyroscopic lighting controller that takes the lighting commands and automatically rotate them to suit the current position of the structure. This new addition allows any lighting content to be displayed on the London Eye with automatic compensation for the Eyes rotation.

A highly accurate 3d camera was used to track the movements of the person interacting on the podium. This information is captured and analysed in real-time by the bespoke Cinimod software system and translated into lighting movements across the London Eye. An added unexpected level of interaction comes in the form of the ear lobe pulse sensor that can be optionally clipped to the performers ear. By linking the heart rate of the user in real-time to the Cinimod control system, the pulse is interpreted and analysed to contribute to the lighting patterns being displayed on the London Eye.