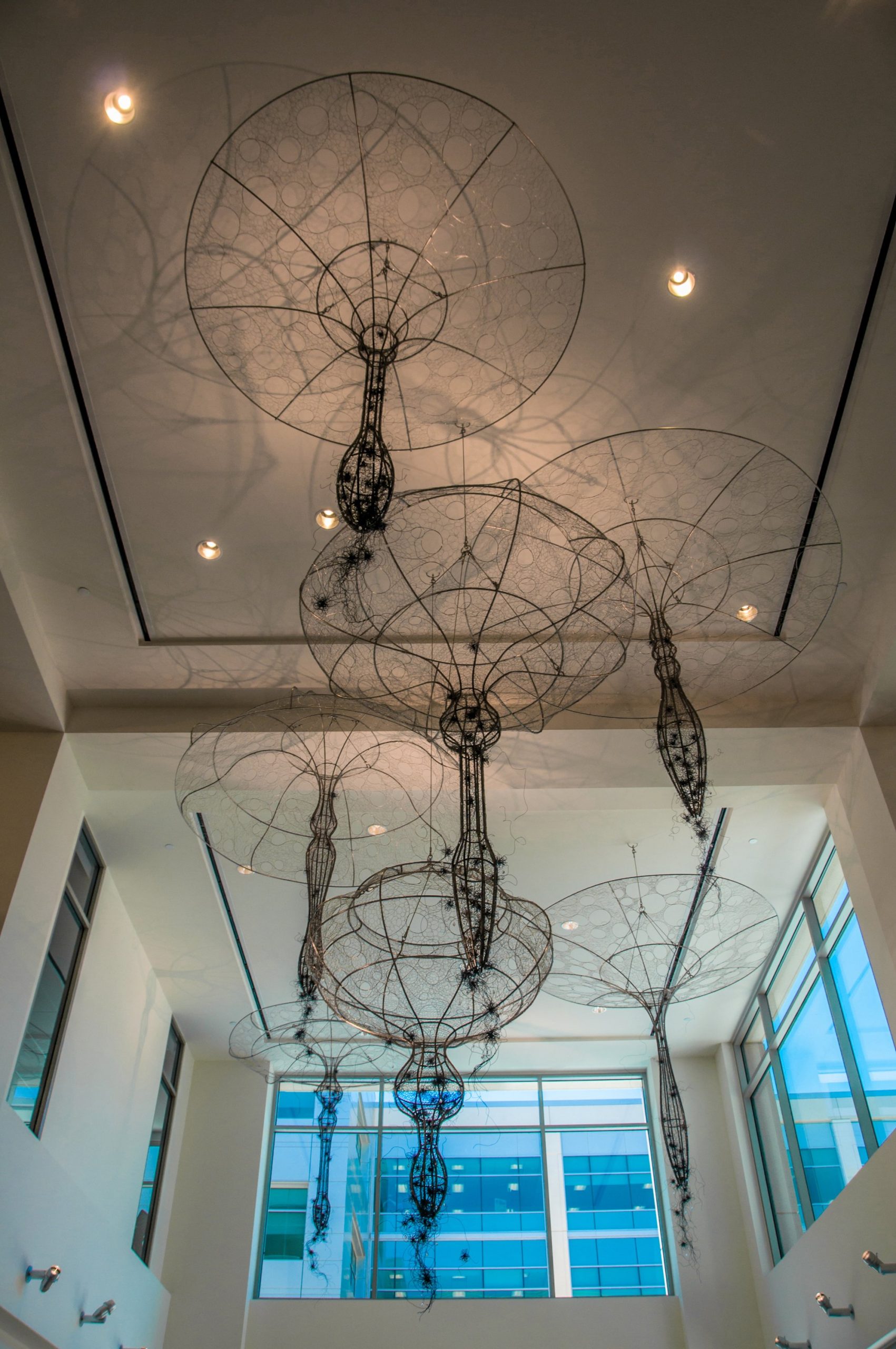 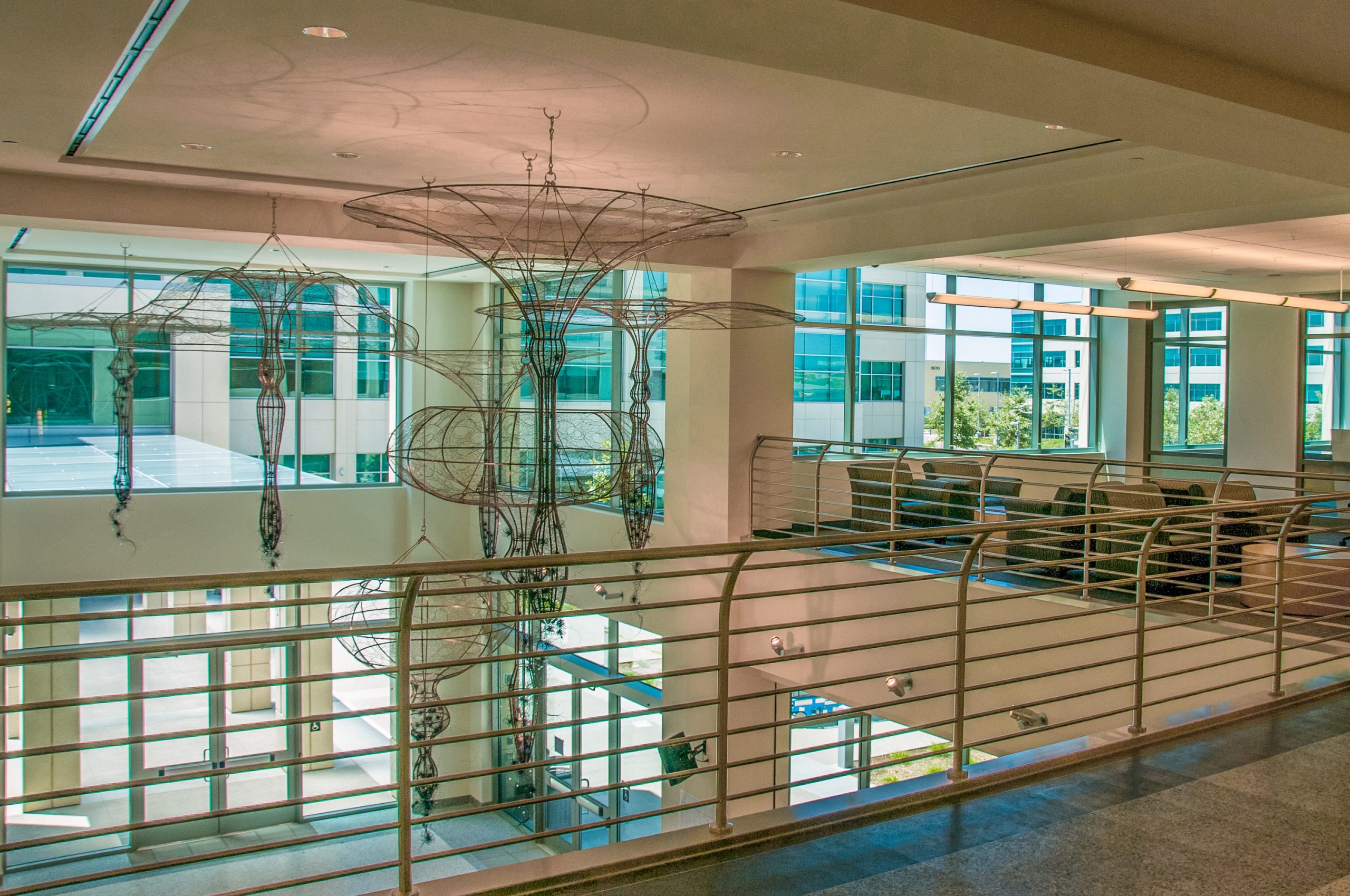 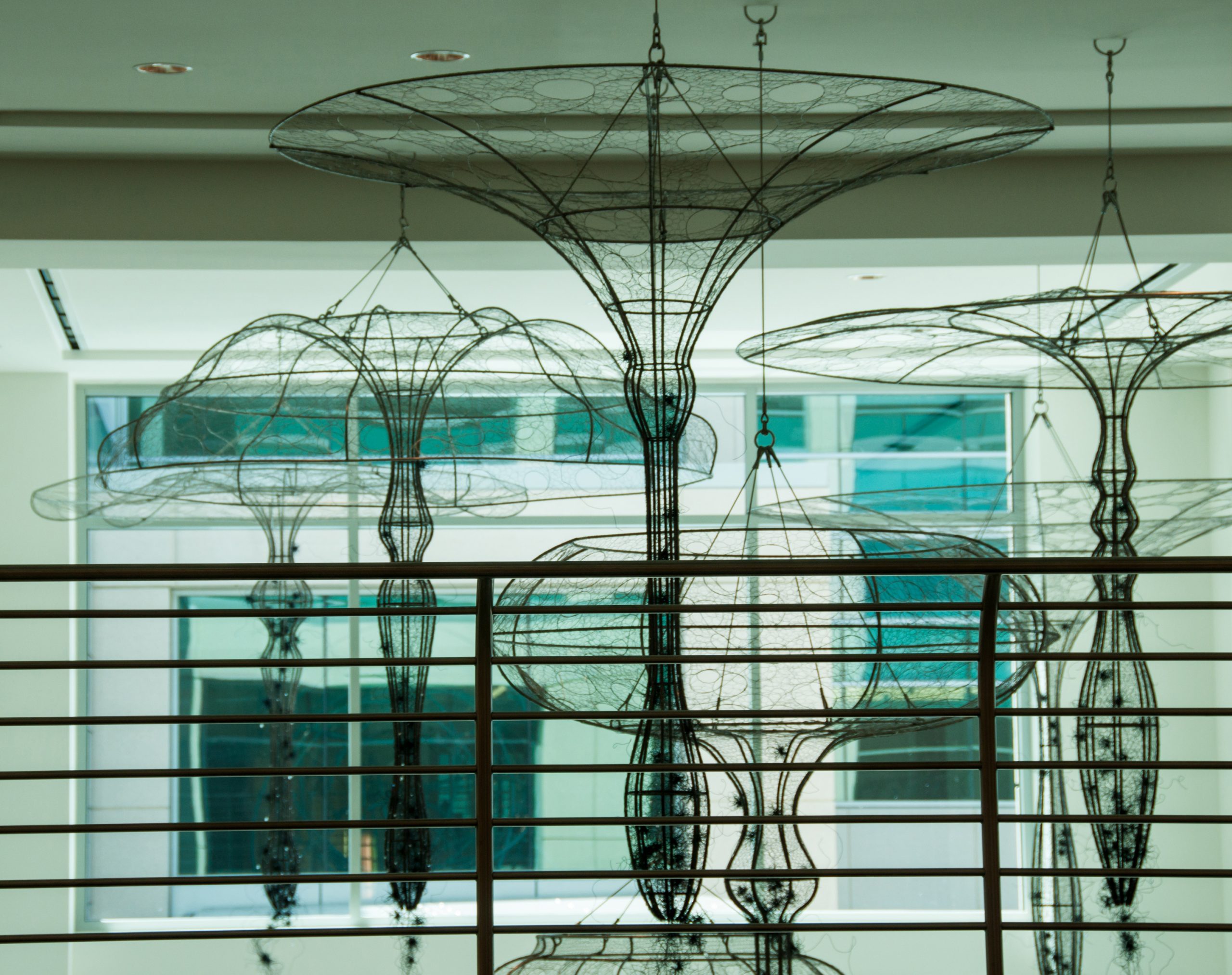 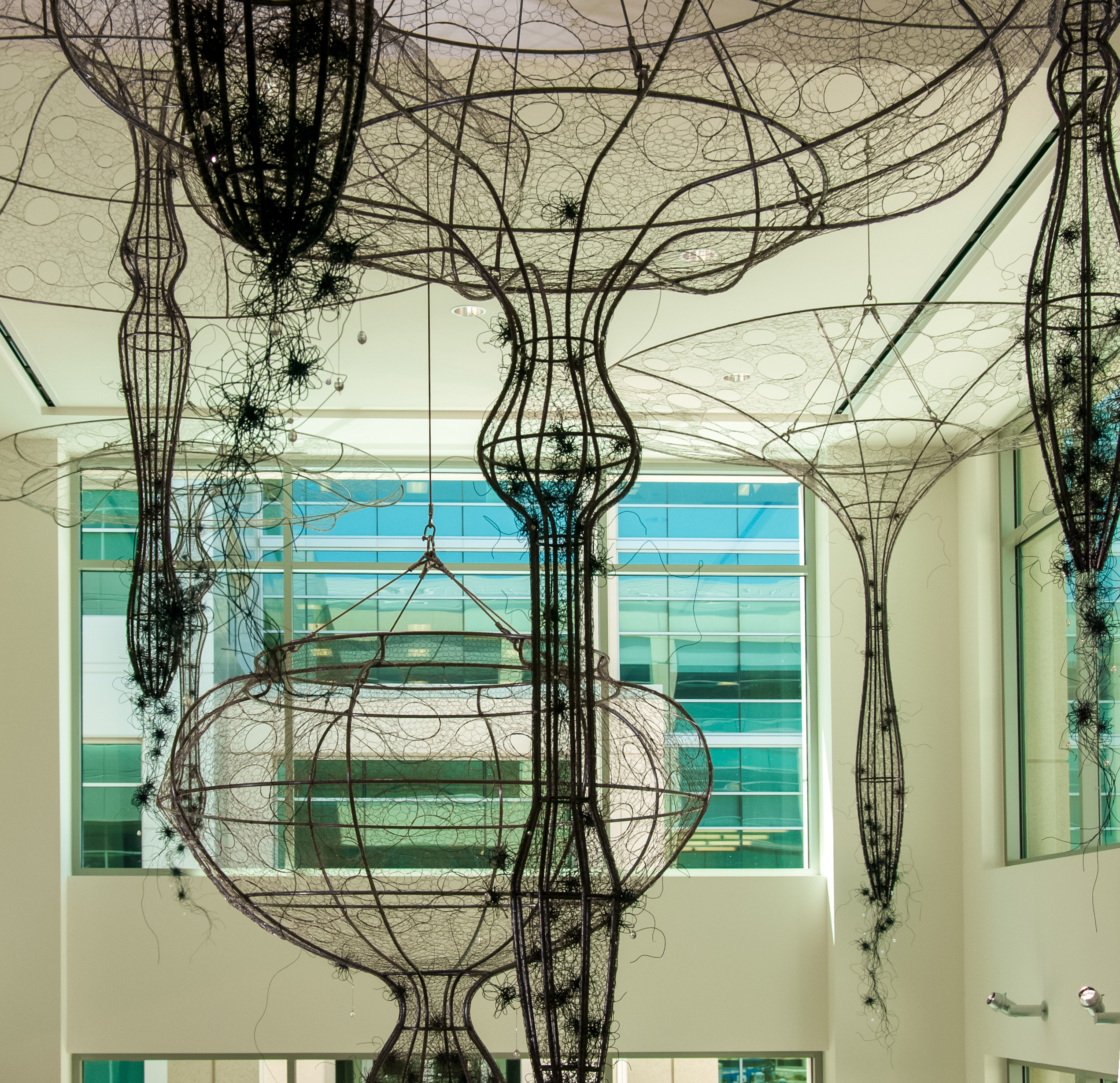 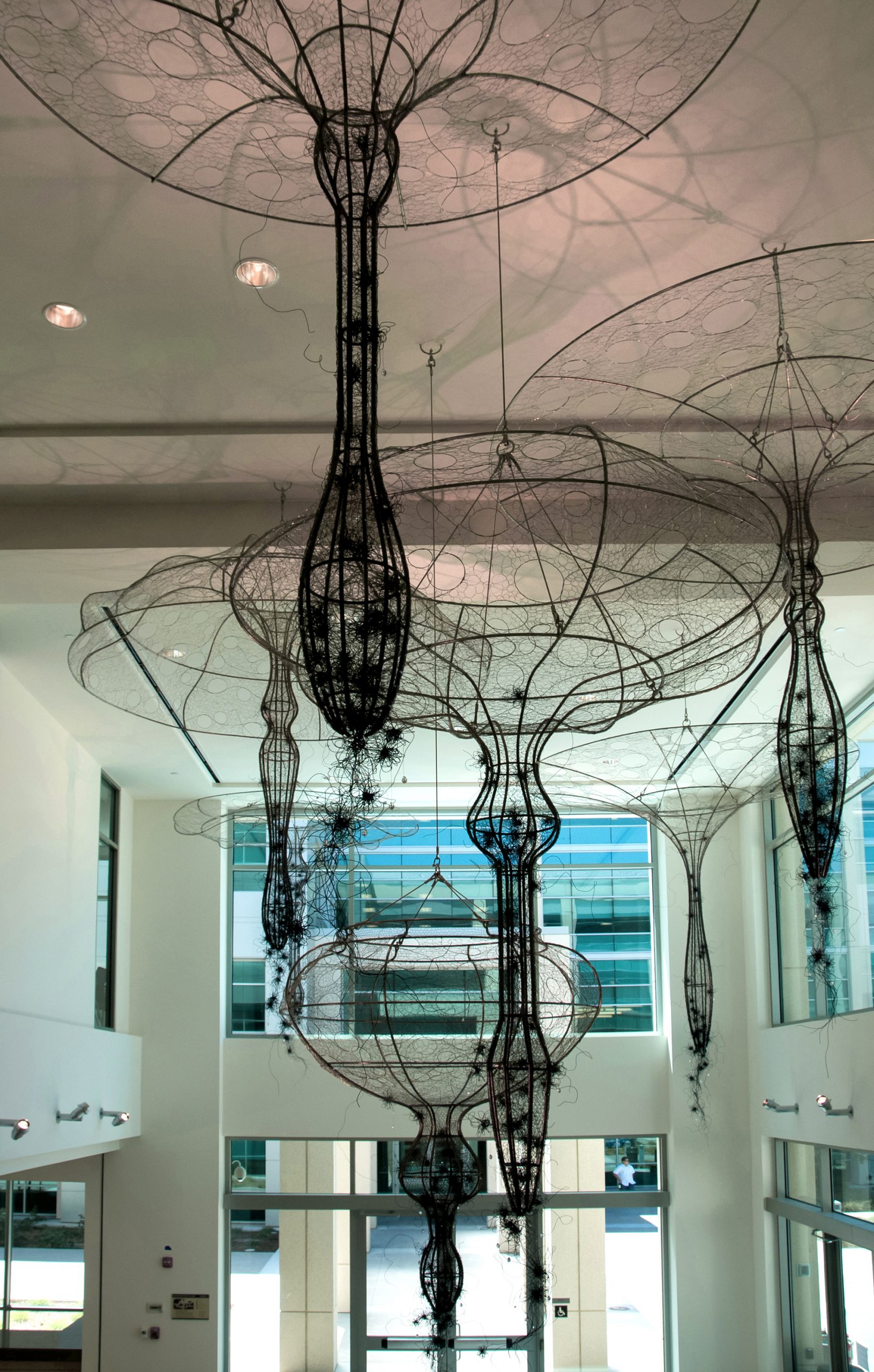 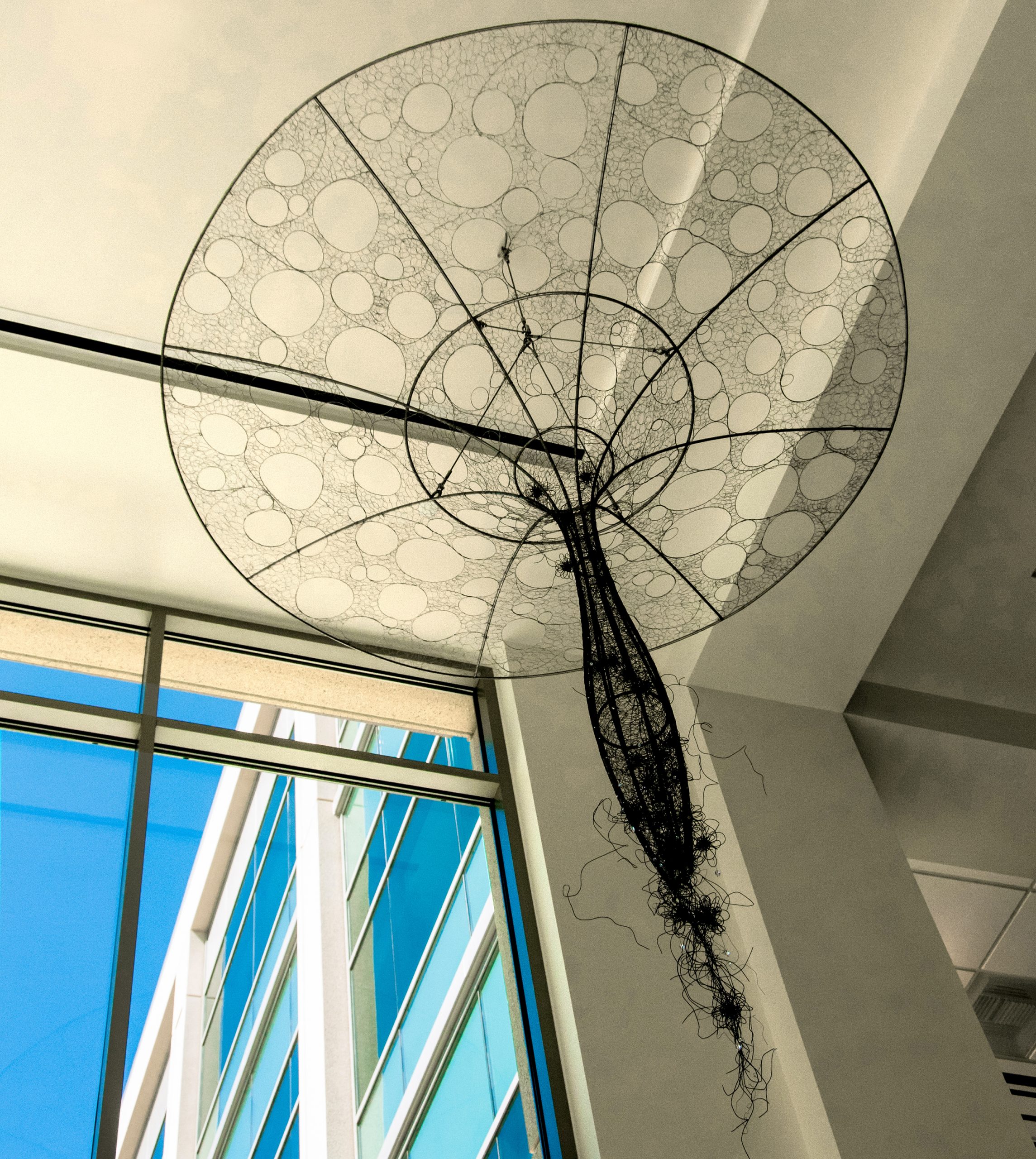 “Littoral Drift” activates the 2-story high lobby of the County of San Diego’s Permit Center. Conceived of as biomorphic chandeliers, the seven suspended sculptures are variations on a theme. Their highly reflective polished stainless steel surfaces enliven the space they occupy with an intricate interplay of light and shadow. Delicately woven upper expanses contrast with darkly attenuated stems, where densely wrapped nodes suggestive of a generative principle protrude and trail off into space. Together, canopy and stem are expressions of light and dark, earth and air, contraction and release, and suggest any number of biological forms, whether aquatic or terrestrial.

In a program that is the first of its kind for the County of San Diego, original works were commissioned for their recently completed Operations Center. The campus allows key services to be consolidated in one location. However, the fact that it includes four almost identical office buildings presented a challenge that the art program was uniquely able to address. It provided each building with a distinctive identity that sets them apart.

For my part, I was acutely aware that workers and visitors would encounter the work countless times over many years. It was important to create something that was responsive to changes in light and point of view. Because the lobby is surrounded by glass, I embedded the stems with crystals that capture glints of light as the sun moves through the sky. The work can be seen from the lobby below, where it appears as a canopy of light and shadow, and from the second floor, where a forest of forms can be viewed close and personal, just out of reach. Important, too, was the theme of the work. Suggestive of jellyfish and other natural forms, they speak to San Diego’s plentiful environmental resources.

Collaborations can be both direct and indirect. An example of the former was a fruitful exchange that took place between myself and members of the selection committee, which was comprised of representatives of the county, the developer, and the architect. At a key point during design, the first two of the four office buildings had since been completed and it became possible to experience actual, as compared to conceptual, space. The committee articulated a concern that “Littoral Drift” as initially designed might not exert enough of a physical presence within that space. I agreed and responded with design changes that increased a sense of mass and lowered several elements into closer proximity of the lobby floor. The outcome of this exchange was critical to the project’s ultimate success.

I encountered other realities of the site that inspired what might be termed indirect collaborations. Most notably, one of the most visually pronounced elements of the architecture is the horizontal railing on the second floor. Knowing the work would have to compete with that helped determine the form the artwork ultimately took. The stems of these otherwise ephemeral forms were designed to have a graphic punch that could contend with their environment.

The County of San Diego has now created a collection of artwork that is integral to its new County Operations Center. Currently numbering 23 works, most of it from local artists, it includes suspended and ground mounted sculptures, original paintings, photographs, and local historic artifacts. In doing this, the County not only celebrates the creative vitality of this region, it also signals to the larger public that creative initiatives should be valued and nurtured. In the process, a more humane space was created for customers and employees alike. It was my privilege to participate in this far-seeing project.