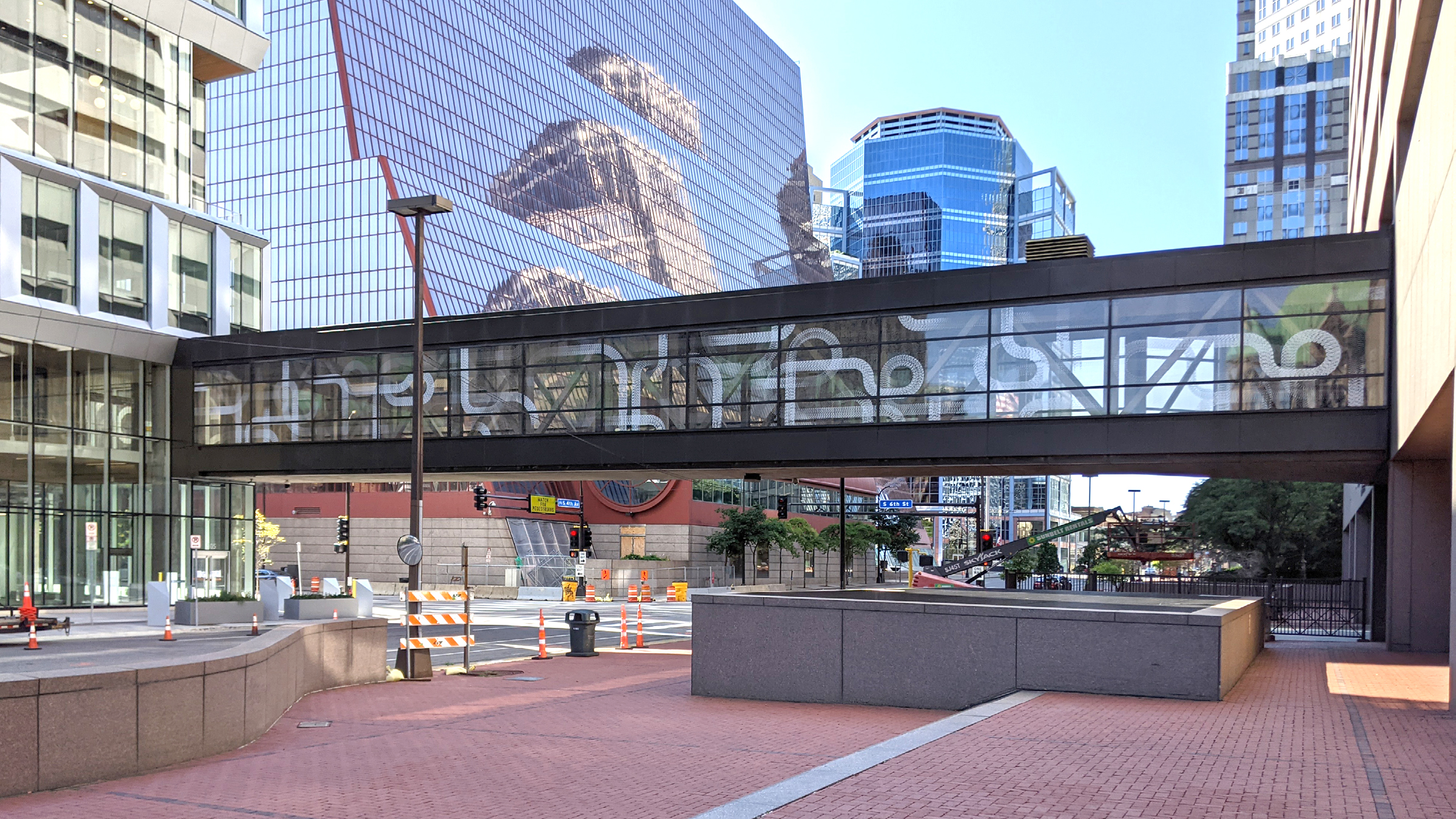 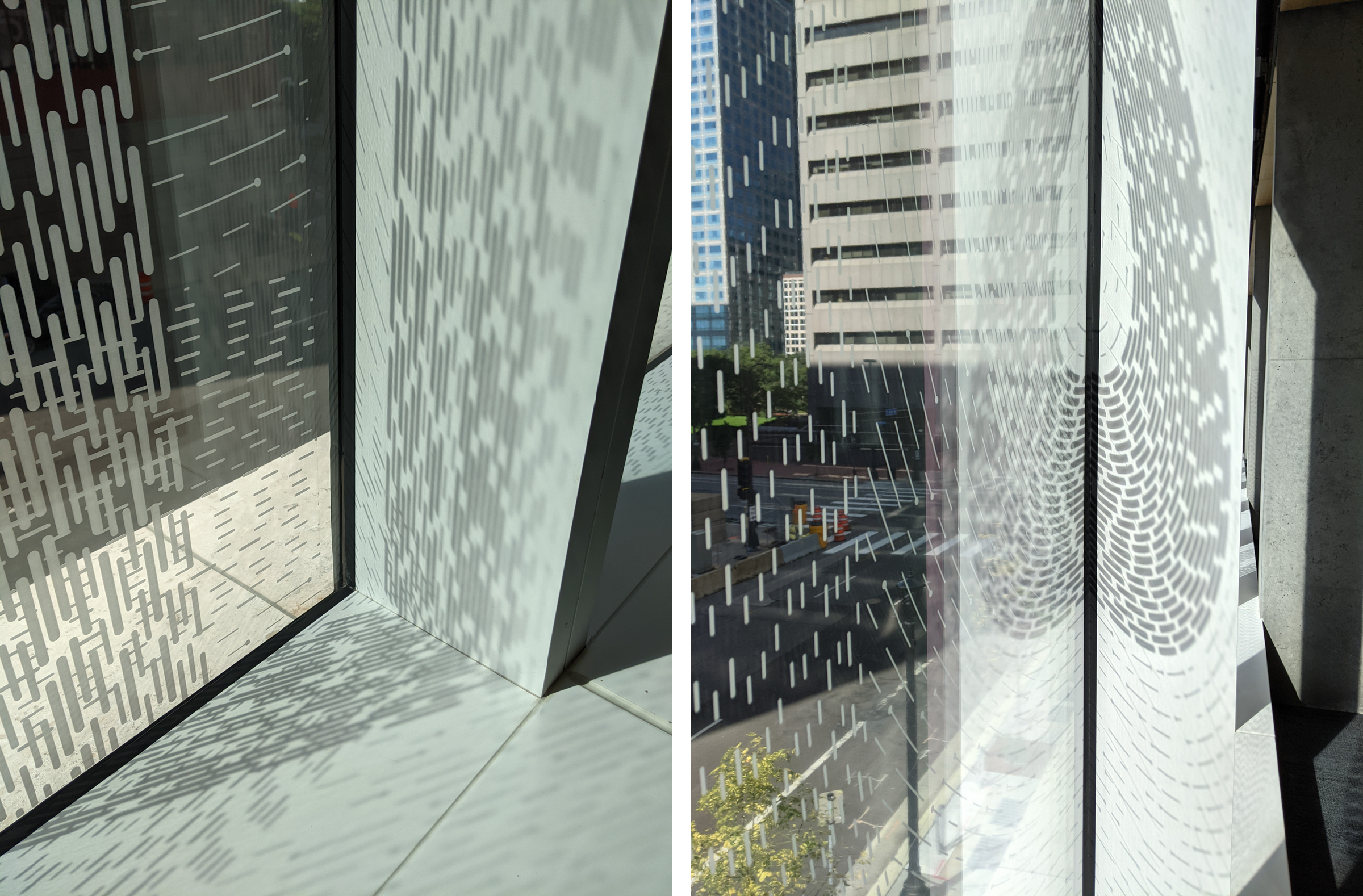 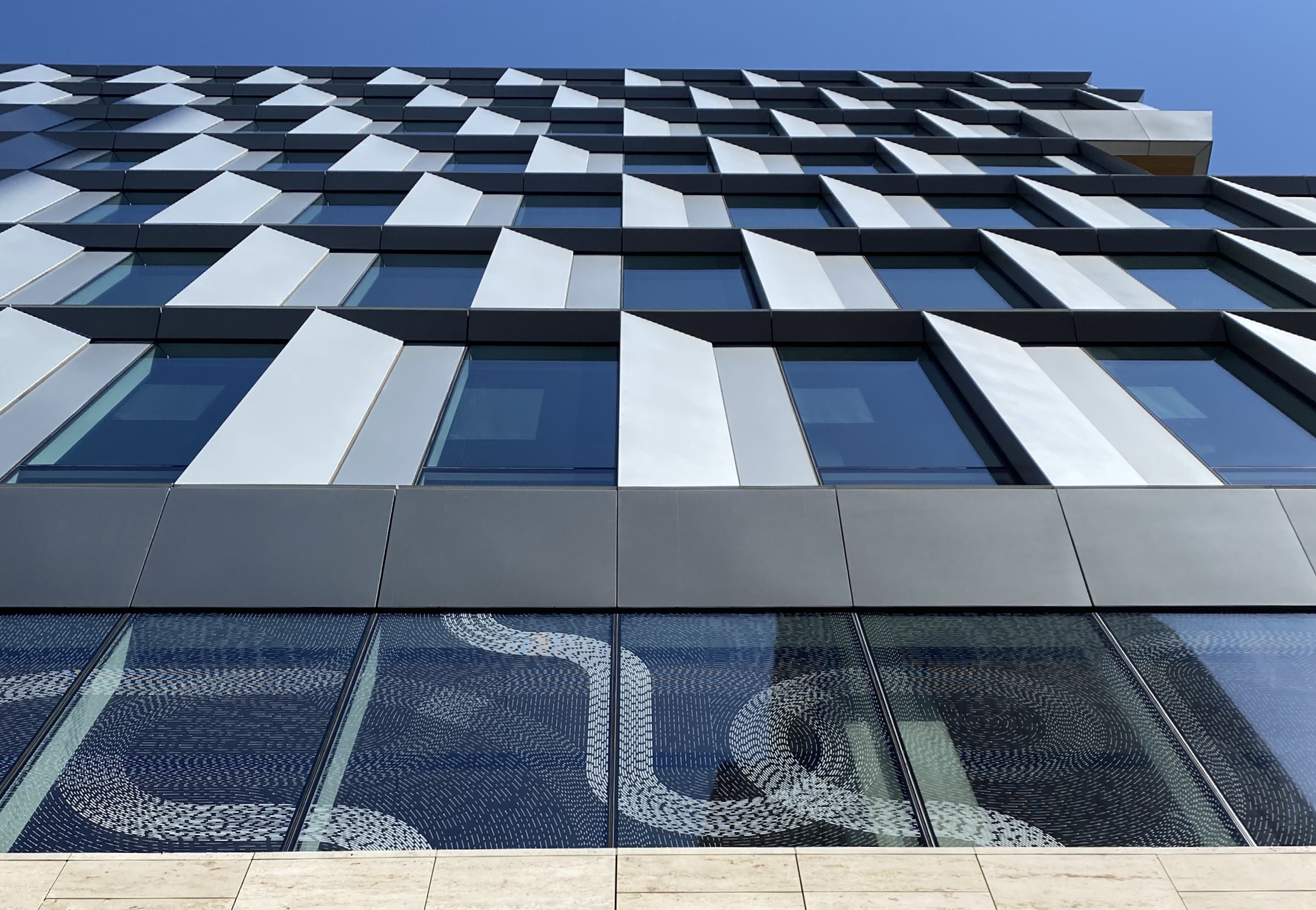 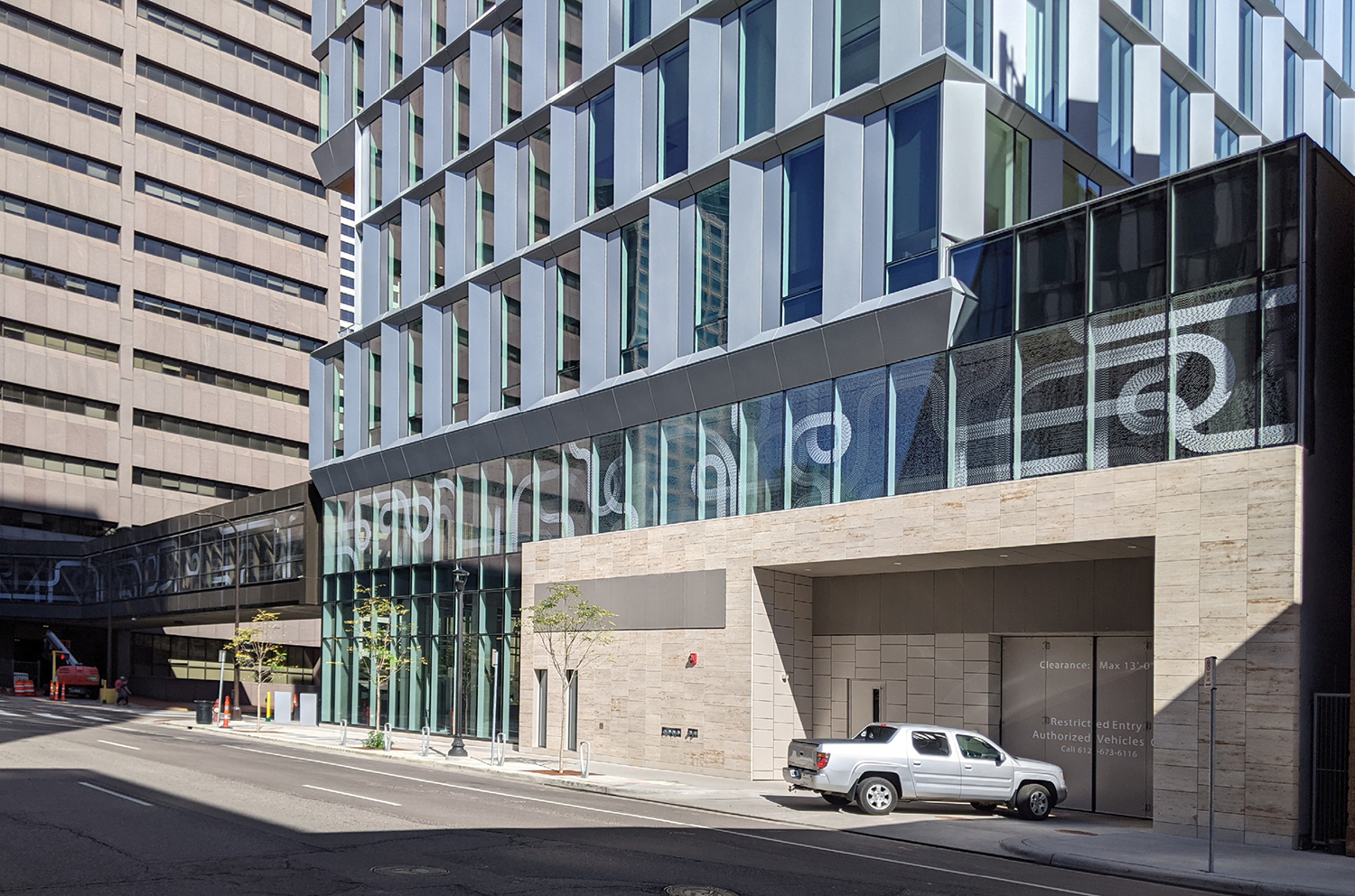 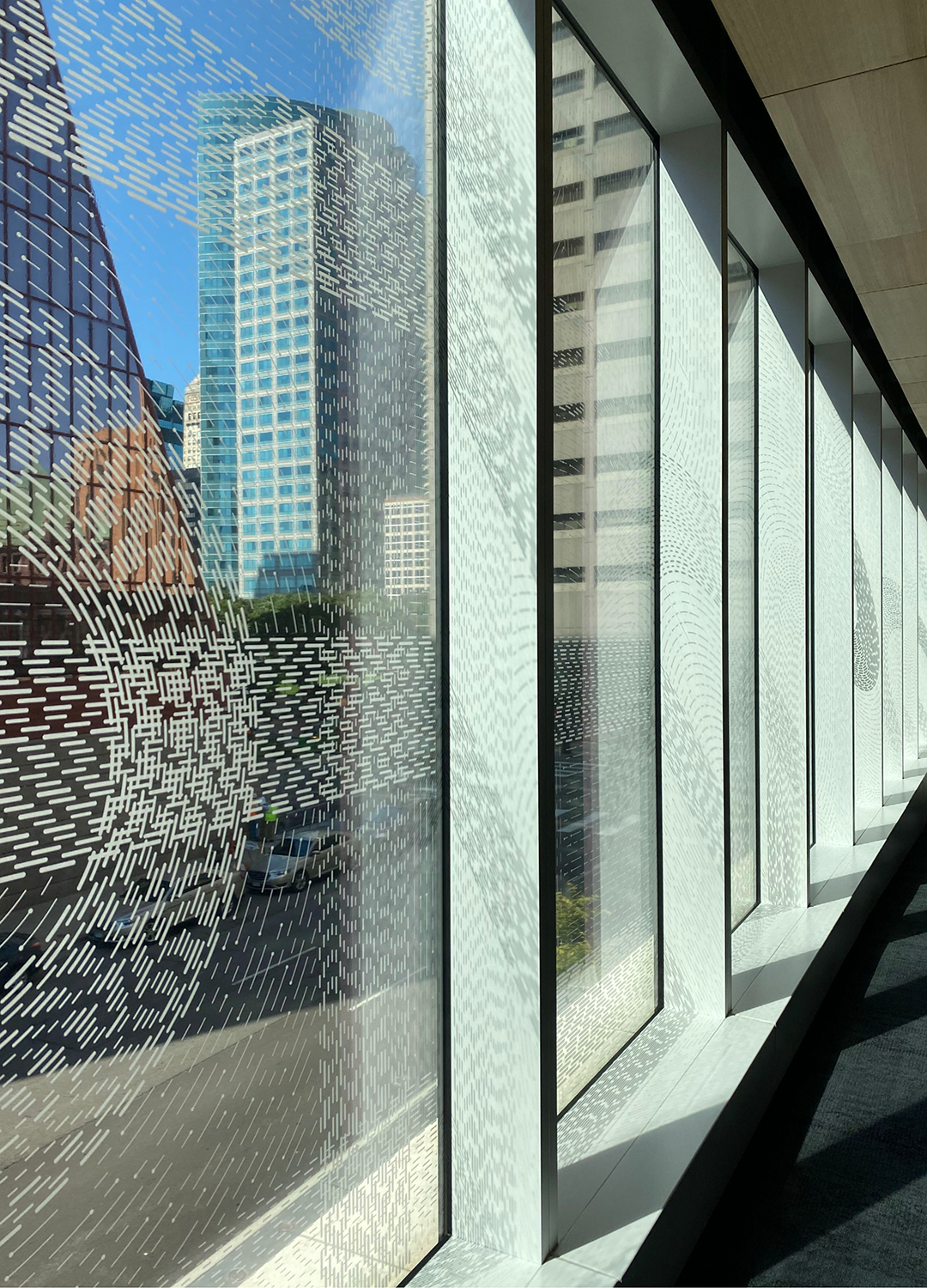 Lines of Flight, Human is a large-scale public artwork for the new Public Service Building at City Hall Plaza in Minneapolis, Minnesota. The custom-designed facade pattern extends along 150’-0” of the building’s second floor and 400’-0” of a public skyway bridge that connects to the county office building across the street. The artwork is intended to meet bird-safe standards for high-rise glass curtain walls, while also providing a dynamic and engaging experience for both people within the public circulation space of the second floor and pedestrians on the street level.
The project is inspired by the migration patterns of humans to the state of Minnesota. The pattern spatializes demographic data as a series of nested bands that weave over and under one another to create an interconnected network across the facade. Each band corresponds to a different immigrant population of Minnesota and serves as a kind of timeline, mapping the history of that respective population’s migration to the state. The variable dash pattern of each band intensifies in density and line weight to indicate moments of greater migration. Between and among the bands is a field consisting of encoded Indigenous place names found within the region. The result produces multiple readings at multiple scales.

The project was conceived in 2018 when anti-immigrant sentiment in the United States was high. One of its goals was to remind viewers that the United States, since its colonization, has become a country of immigrants. Minnesota, in particular, has been particularly welcoming. According to the U.S. census and refugee-support agencies, Minnesota has the highest number of refugees per capita nationwide. With 2% of the nation’s population, Minnesota has 13% of its refugees. For workers, visitors and other passers-by of the Public Service Building, Lines of Flight, Humans is a call to celebrate immigrants, immigration, and the varied paths and perspectives of our diverse community. As a visual illustration that immigration has been central to the state’s history, the piece can serve as a reminder to extend this welcome to others into the future.

Although commissioned as a public artwork, the project also needed to conform to bird-safety standards for glass facades. This was an important facet of the project, as the data-rich pattern also includes graphic elements that satisfy the minimum density needed to prevent bird collisions with the glass.

Futures North employed an algorithmic design process for the pattern integrated data-driven and recursive workflows. This allowed the project to synthesize historical data, communicative design, and bird-safe parameters. The project was commissioned by the City of Minneapolis after a national selection process. Statistician Alicia Johnson collaborated with the team to interpret large immigration datasets from the US Census Bureau. During the design process Futures North met with Senior Demographer of the State of Minnesota, Megan Robertson Dayton and Dakota Artist, Angela Two Stars to solicit feedback about the artwork. Futures North worked closely with the building architects Henning Larsen and MSR Design as well as the fabricators and installers to coordinate the pattern with the curtain wall design. There was an intensive review process with council members as well as a public art review committee from the City of Minneapolis.

As a government building to house a variety of Minneapolis’s city employees and services, the Public Service Building was designed to serve the city’s residents. Lines of Flight, Human leverages computational processes to explore histories of immigration to this region as a way to engage viewers with a design that references the site’s history and the building’s public role. When examining the history of immigration, however, one cannot overlook the history of genocide and forced dispossession of Indigenous communities that call this region home. Lines of Flight, Human embeds a visual land acknowledgement alongside the history of immigration of diverse groups to the region currently known as Minnesota. The project’s computational design integrates generative, data-driven, and analytical workflows to synthesize conceptual, communicative, and bird-safe parameters. This results in an artwork that is graphically bold, visually dynamic, and responsive to context. Too often, bird-safe glass frit and printed film are an afterthought making use of repetitive, off-the-shelf patterns. Lines of Flight, Human suggests novel pathways for building facade design that blend public engagement and computational design with a sensitivity to non-human inhabitants with whom we share the environment.