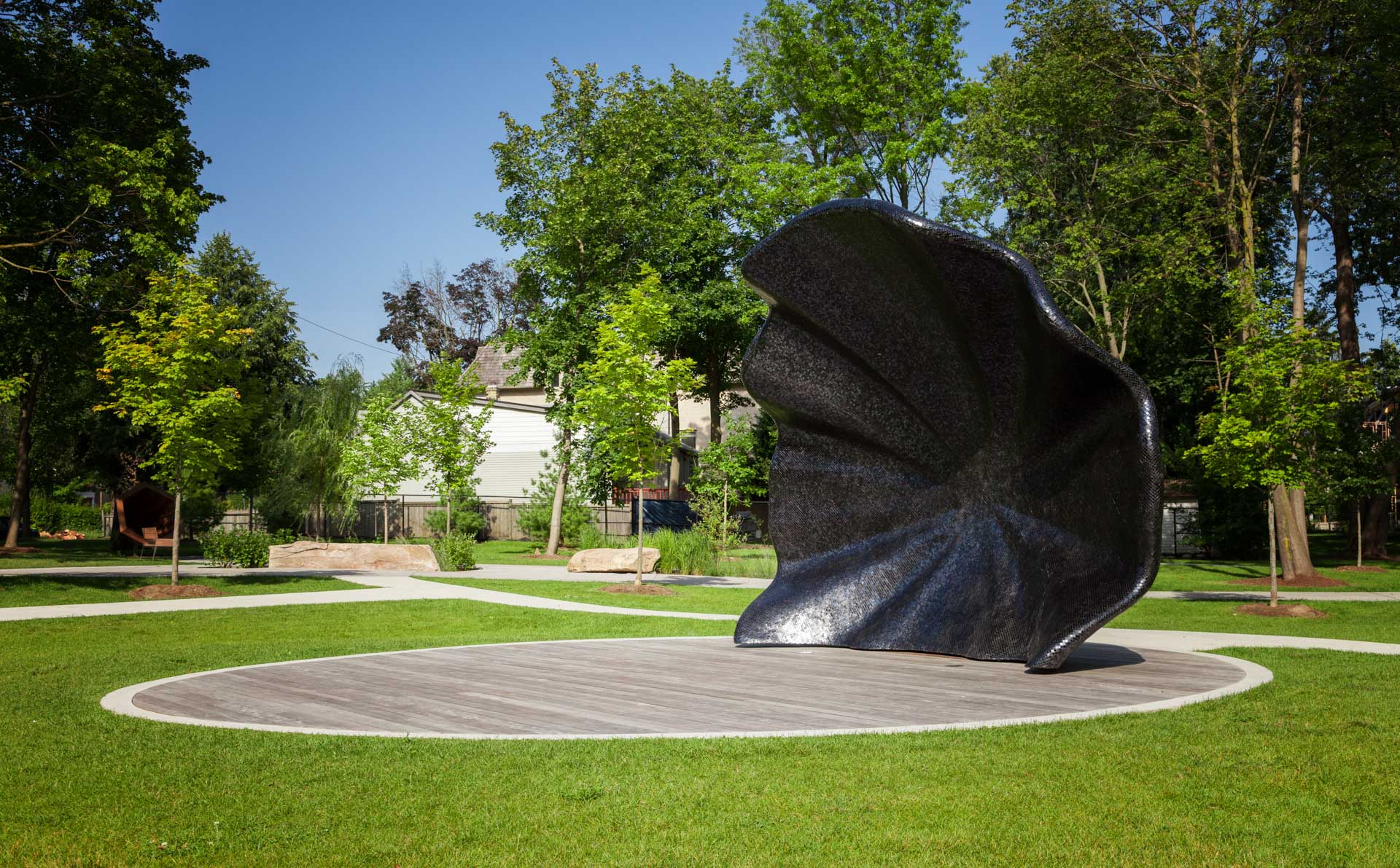 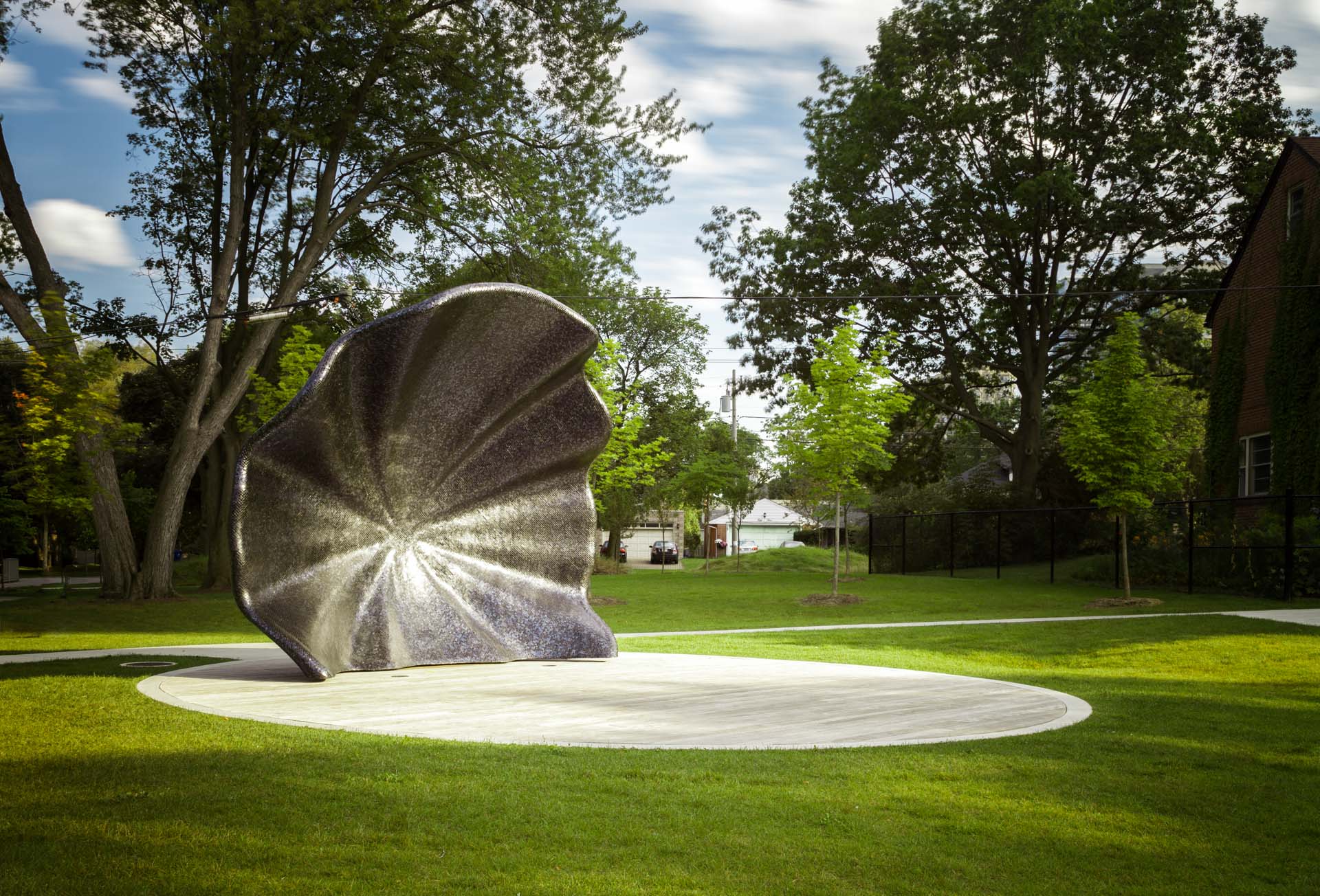 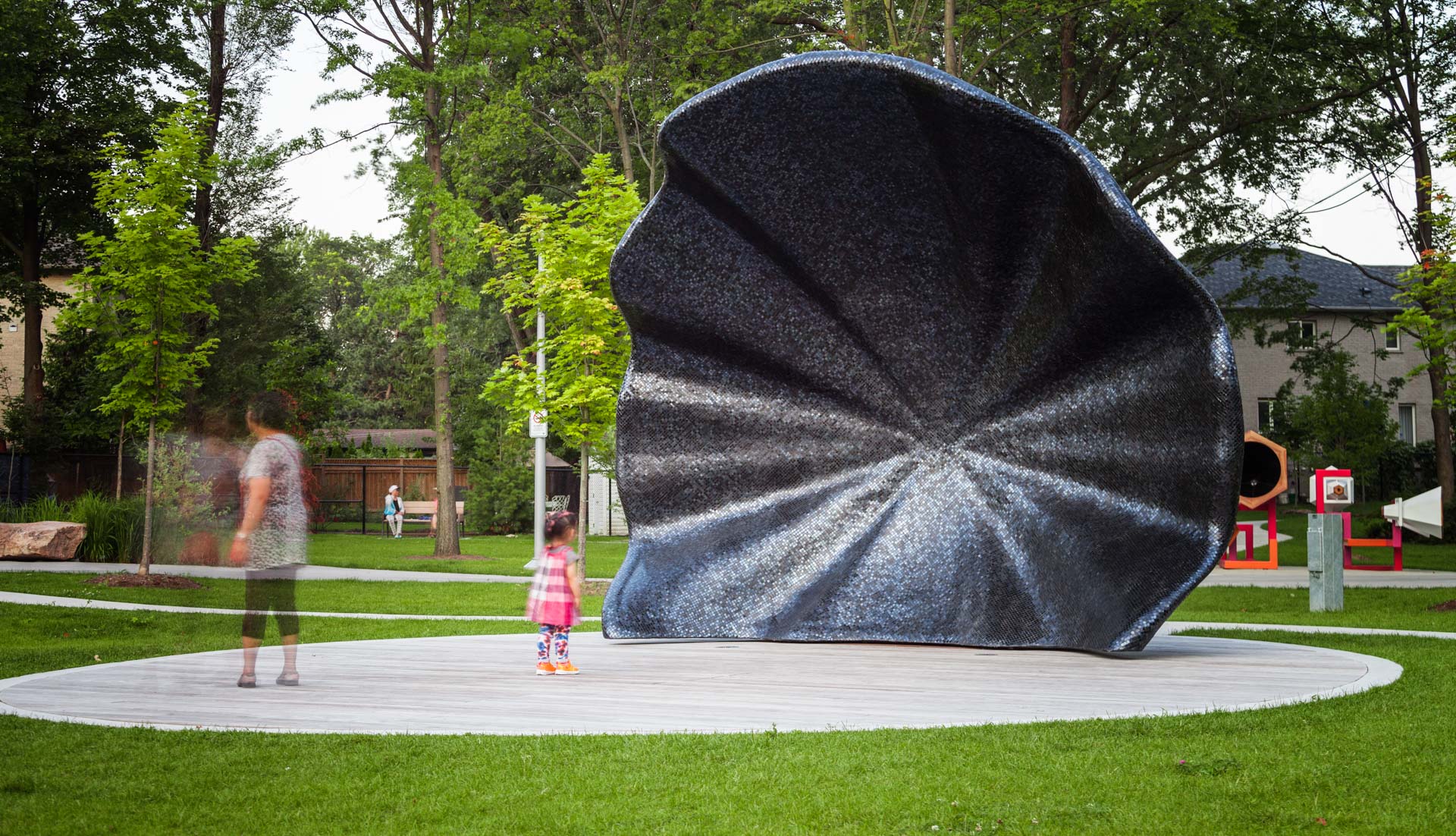 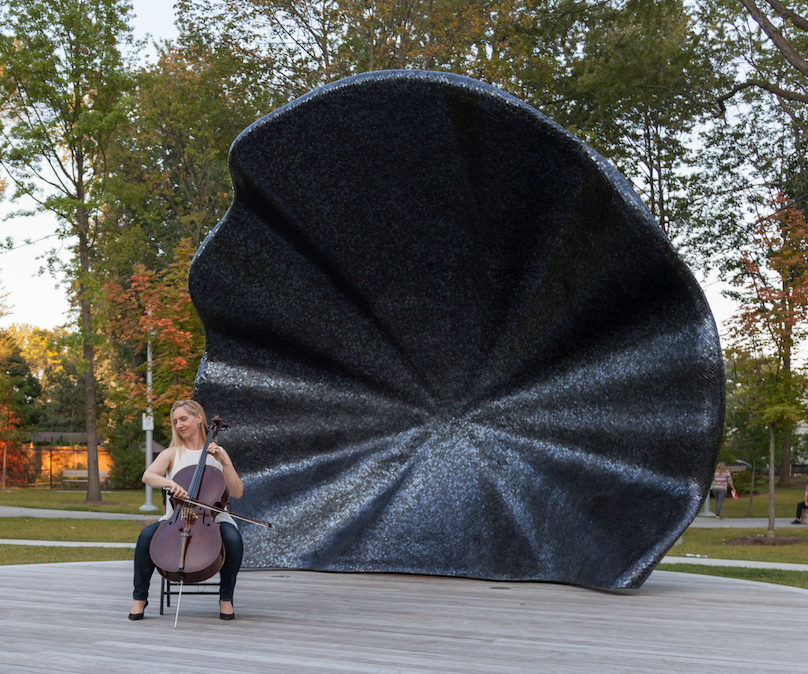 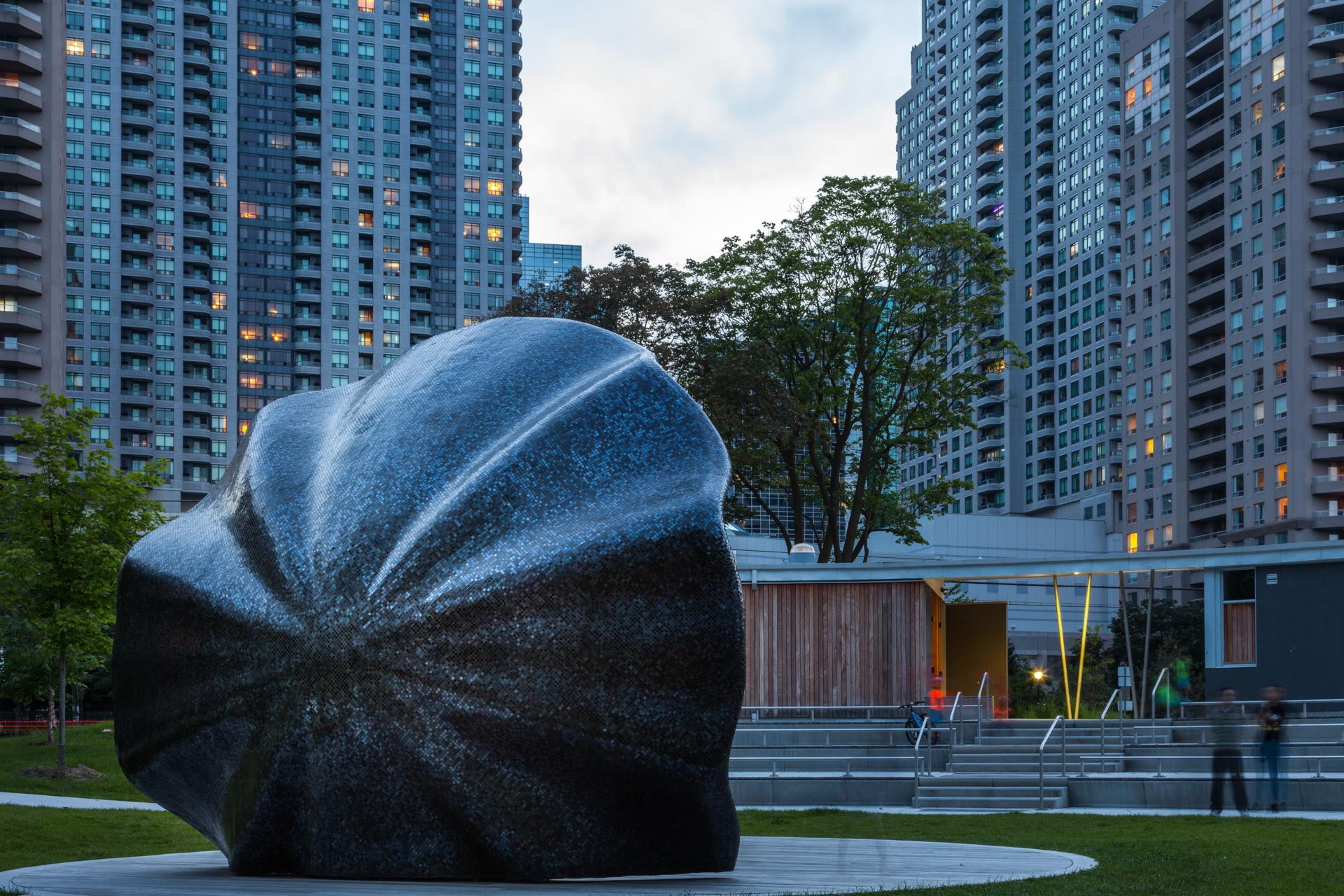 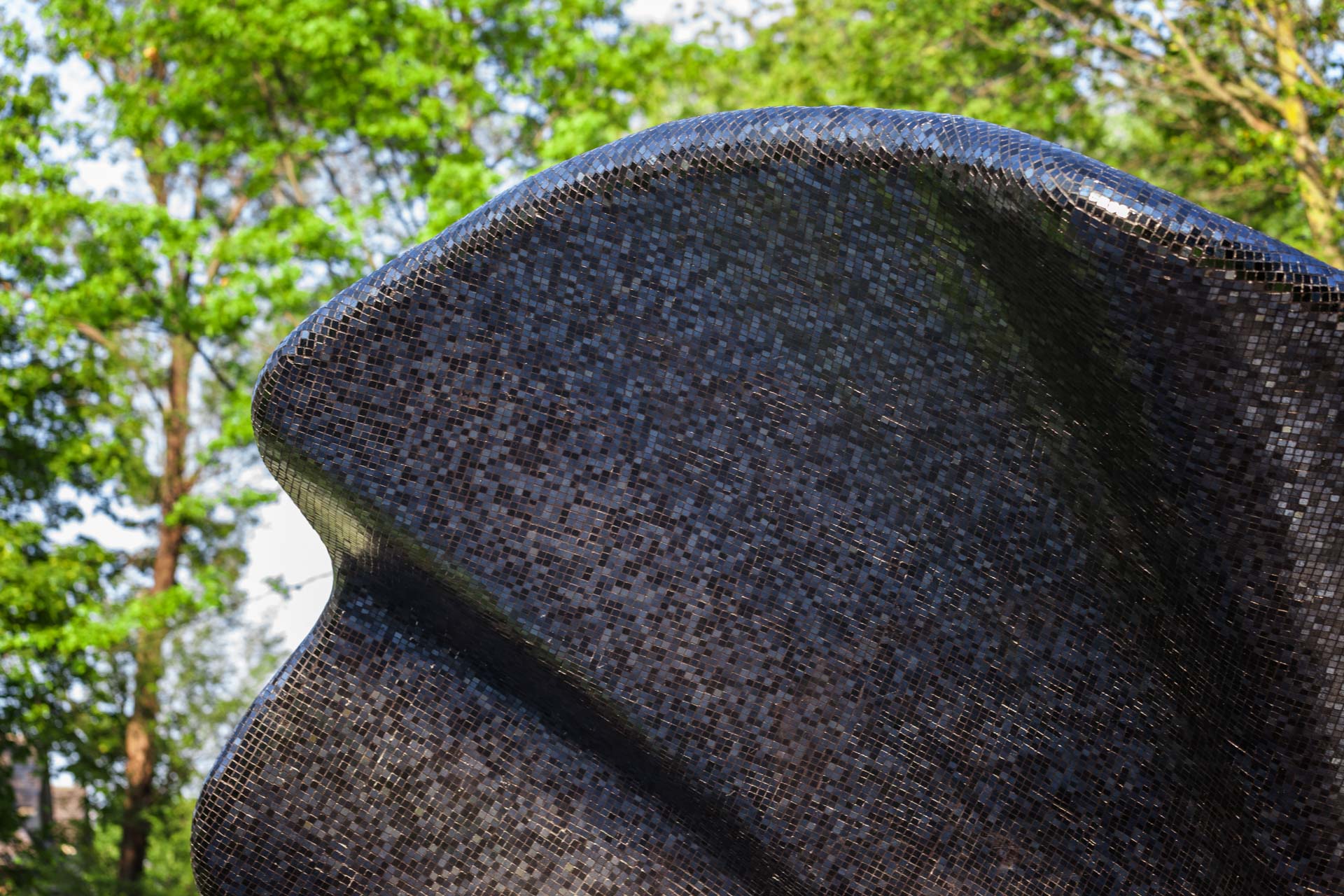 Eventscape was proud to build Limelight Bandshell , Paul Raff Studio’s public art piece, in the Lee Lifeson Art Park in North York, Toronto. Paul Raff designed an acoustically reflective “bandshell” as a backdrop at the centre of the natural amphitheater finished with a stage, three levels of seating and a pavilion. After assessing various materials, the final design was a three-dimensional shell that measured 13- by 16- by seven-feet. It was built with a steel sub-frame, foam interlayer, fiberglass coating and 1/2- by 1/2-inch black glass mosaic tile finish.

This park was designed with the theme of sound and integrated several structures that encouraged playing with sound. At the center of the space, there was a natural amphitheater. Paul Raff conceived the sculpture to be the visual center and focus of the newly constructed amphitheater seating. The artwork transformed an under-utilized green space into an urban destination. The City of Toronto schedules weekly open-air concerts at the bandshell resulting in a new community engagement and a new appreciation of both art and music. In the words of the designer Paul Raff “Based on the principle of the parabolic reflector, Limelight was intended to remind viewers of the dynamic geometry of sound and light reflection. The sculpture is a simple and effective way to transform formal and informal performances into memorable and unique experience within the public realm”.

The structural fabrication challenge of this project was figuring out how to construct a complex geometrical shape using flat, two-dimensional materials. The Eventscape team opted for two-pound polyurethane milling foam that could be molded and then covered it with fiberglass. This enabled us to form the bandshell's fluted shape. The engineered steel sub-frame provided support for the foam, fiberglass and tile. The main 1/2-inch steel centre plate and 5/8-inch steel ribs were CNC-cut to conform to the complicated curvature of the shell.

Eventscape researched the best mortar and grout for the glass mosaic tiles. We tested various exterior, automotive and marine-grade products. Extra special care was taken on the tiling, with 15 percent of the tile work applied as individual 1/2-inch square tiles. Many of them required cutting to accommodate the undulations along the shell’s surface. Because it involved applying flat tiles to a rounded perimeter, the edge detail was the most complex. A final layer of anti-graffiti coating was added for protection in this public space. Paul Raff and his team reviewed and approved each layer as the shell was built.

Dedicated in 2016, the Lee Lifeson Art Park was named in honor of a couple of neighbourhood superstars -- Geddy Lee and Alex Lifeson -- who formed the celebrated Canadian rock band Rush. Based on the theme of sound, the artwork transformed an under-utilized green space into an urban destination.