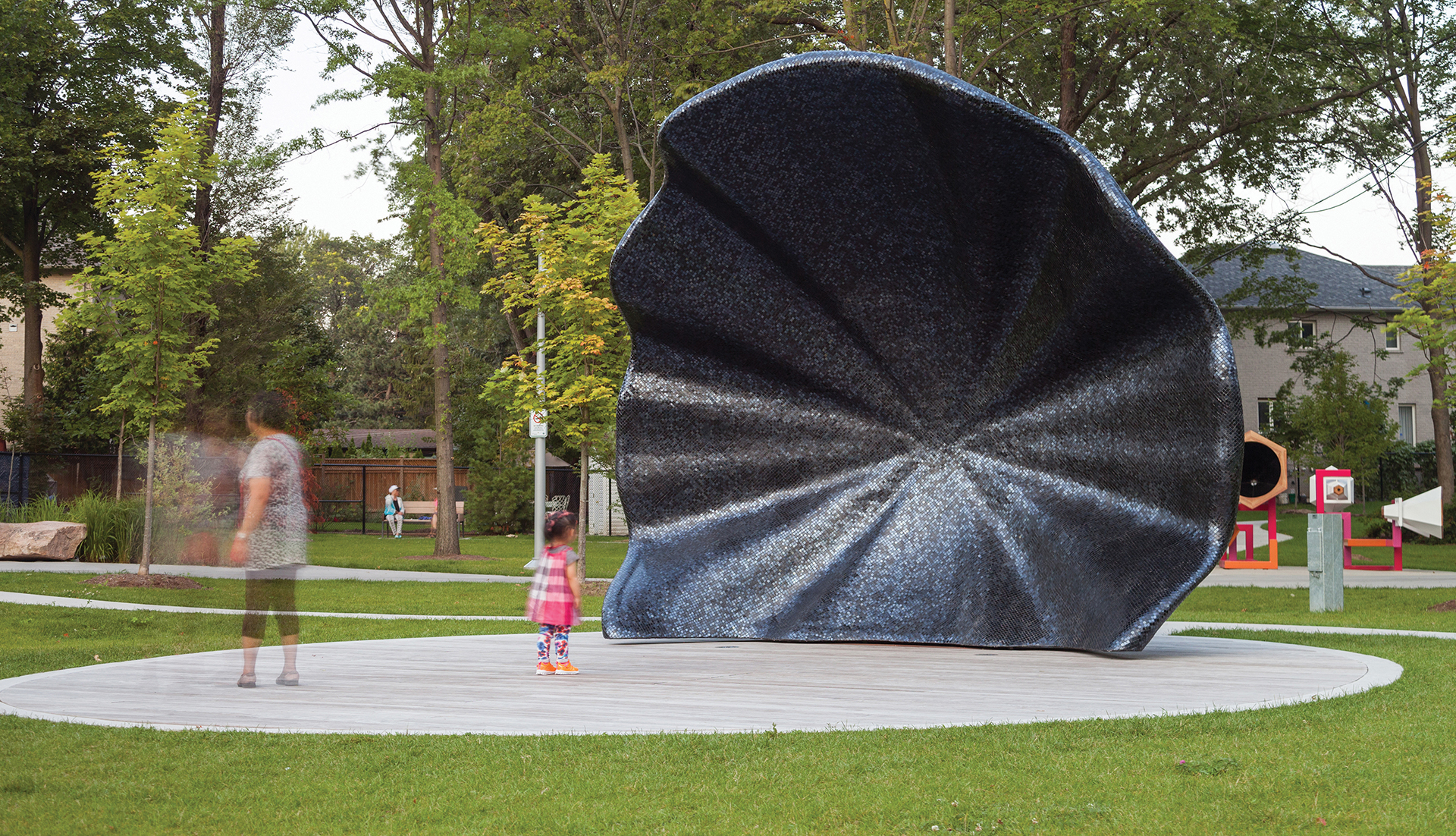 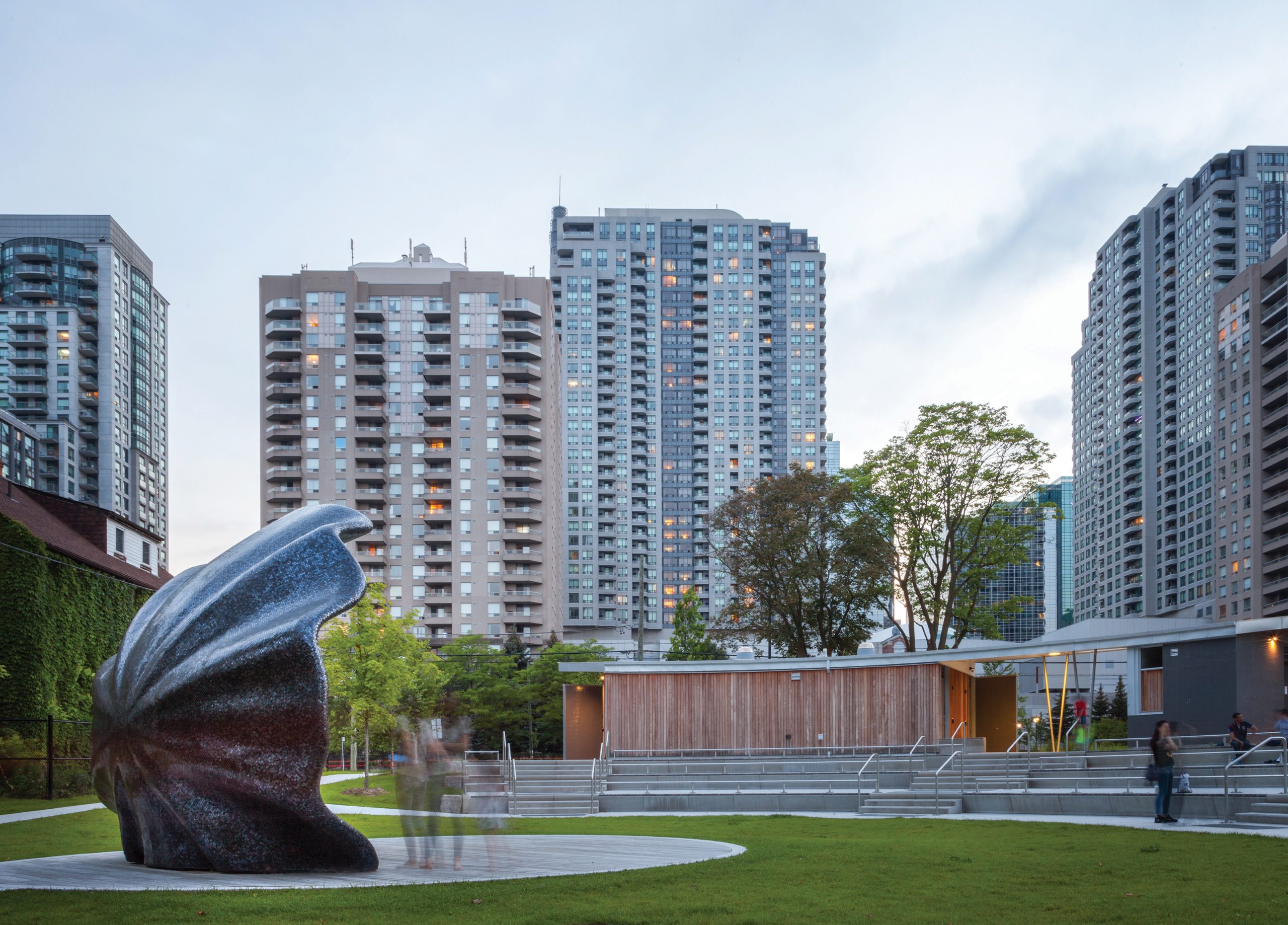 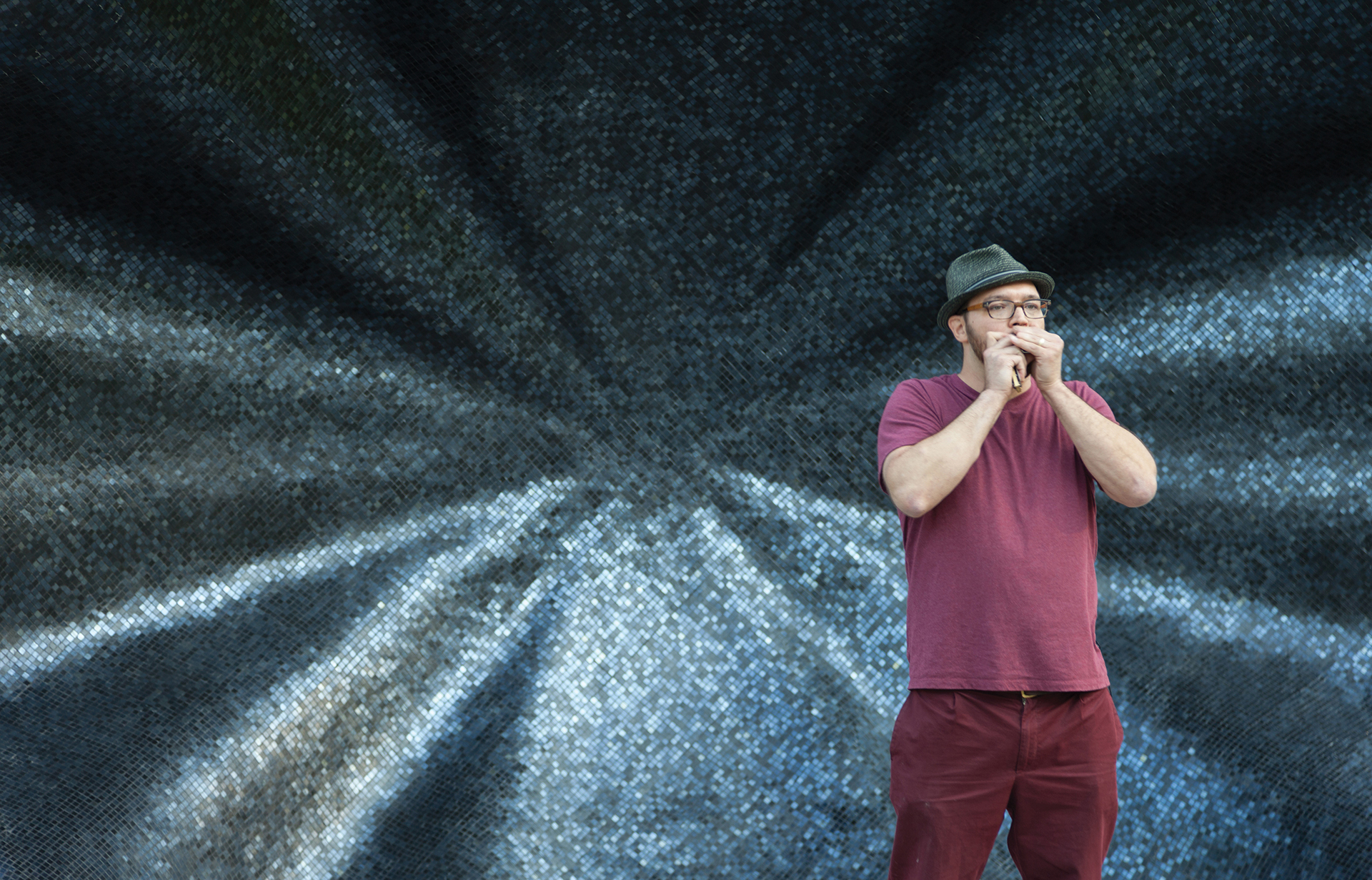 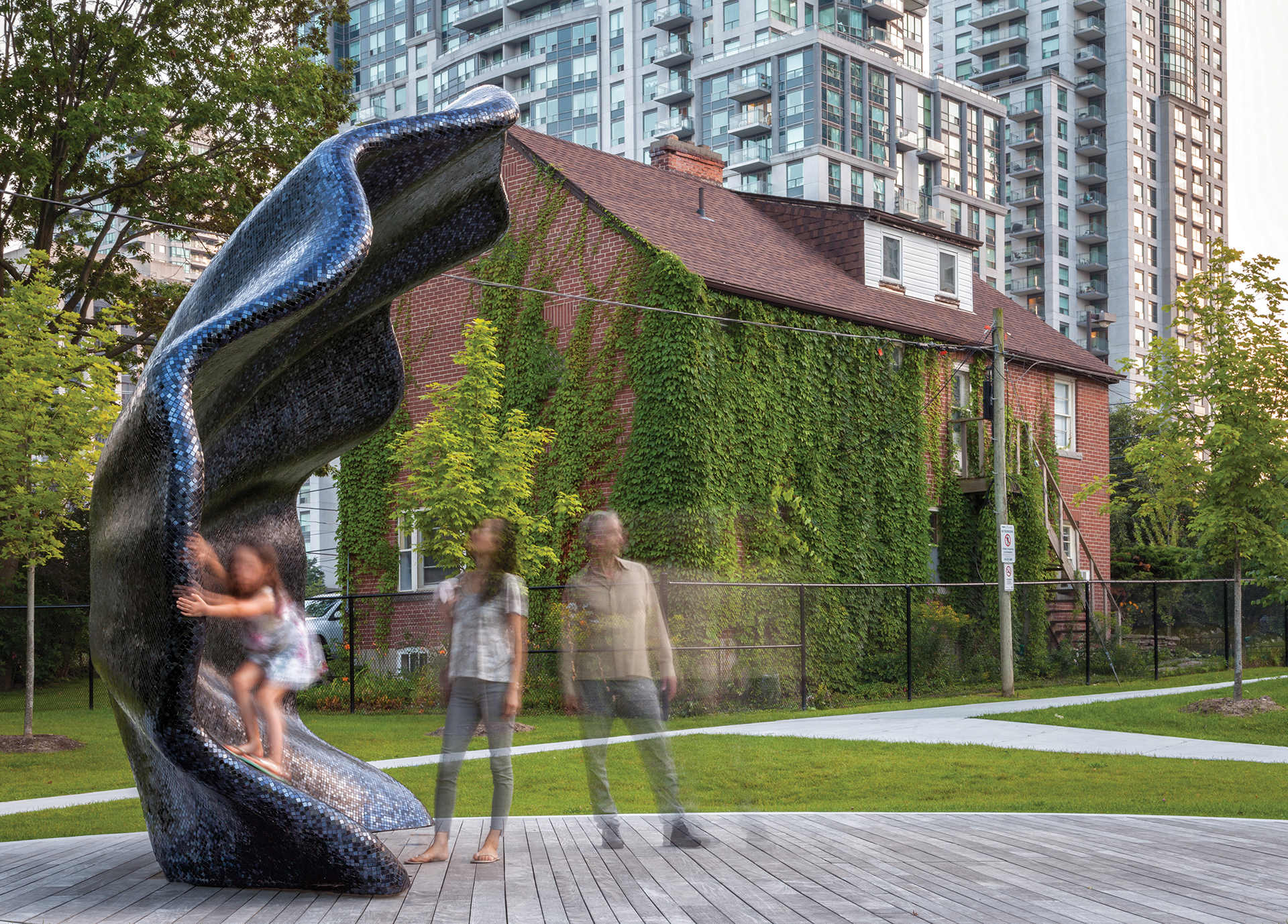 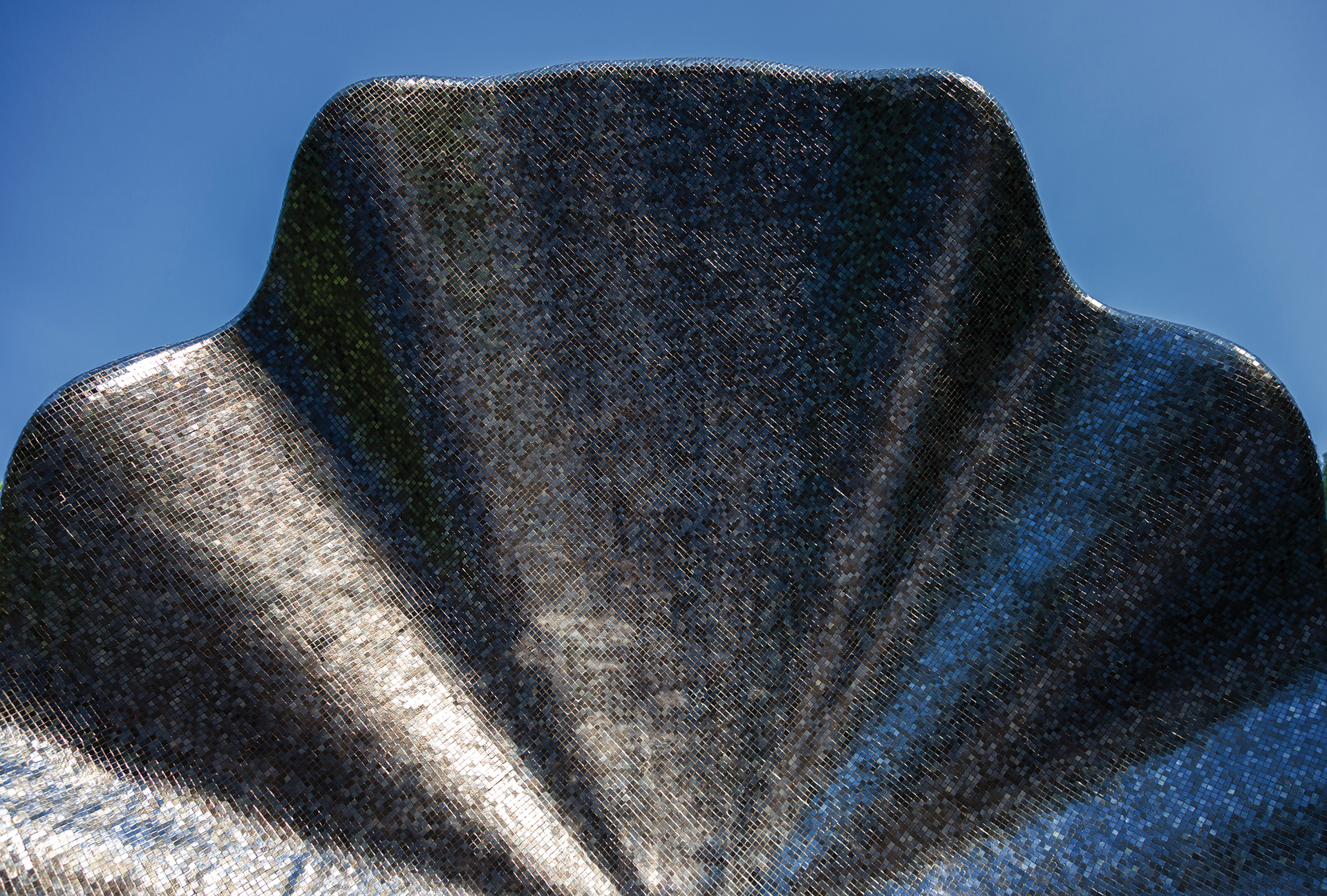 Limelight Bandshell is the focal point of an amphitheatre in Toronto’s new Lee Lifeson Art Park. The park is named after two members of the rock band Rush who grew up in the neighbourhood. Taking its name from the famous Rush song, Limelight is a shell-like sculpture that uses acoustic principles to capture and reflect sound. Functionally, it directs the sound from the performer on stage towards the audience. Formally, it is playful and strikingly distinctive.

Lee Lifeson Art Park is a new, outdoor recreational area in a growing part of north Toronto. Paul Raff Studio was commissioned to create a conceptual art installation around the theme of sound to integrate with the new park’s landscape design.

Paul Raff Studio used this opportunity to work with the landscape architect to create something beyond the literal theme. Limelight Bandshell was conceived as the visual centrepiece and functional focal point for a small performance space which anchors the park’s newly constructed amphitheater seating. The sculpture is a simple and effective way to transform formal and informal performances into memorable and unique experiences within the public realm. The result transformed the park into a community-activated outdoor venue which supports culture-making and provides a unique, iconic landmark that helps build civic identity.

The artwork is fastened to a concealed foundation below a wood deck which makes it appears to arise from the ground plane. This creates a visually powerful and seamless backdrop for sound-based events on stage.

Limelight Bandshell is a visual and spatial exploration of acoustics and reflection, and anchors a place for creating and experiencing music in Lee Lifeson Art Park.

Paul Raff Studio was asked by the City of Toronto to collaborate on creating a new urban park with an arts focus with a sound theme. Working as the Artist on the park’s design team with the landscape architect, Paul Raff Studio developed a vision for the park to include an outdoor amphitheater—a venue for various neighbourhood and performing arts groups. As the focal point, the studio proposed a sound-reflecting sculpture that would be a functional backdrop for the amphitheater stage.

Once the design process was completed, Paul Raff Studio took on managing fabrication and installation of the Bandshell with Toronto’s custom fabricator, Eventscape. The Bandshell underwent an intense period of acoustic testing and design, and necessitated aircraft building techniques to ensure its unique form conformed to all environmental and structural requirements.

Limelight Bandshell’s form reflects its acoustic function: its undulating ridges capture and focus sound at the centre point, reflecting it back at the audience. In this way, Limelight Bandshell honours its eponymous stars by becoming a metaphor of their uniquely powerful sound.

Lee Lifeson Art Park was dedicated in 2017 and now hosts formal and informal performances in its newly completed outdoor venue. Limelight Bandshell sets the stage for official performances but almost more importantly allows anyone to step into the limelight and project sound; to express themselves, to engage and interact.