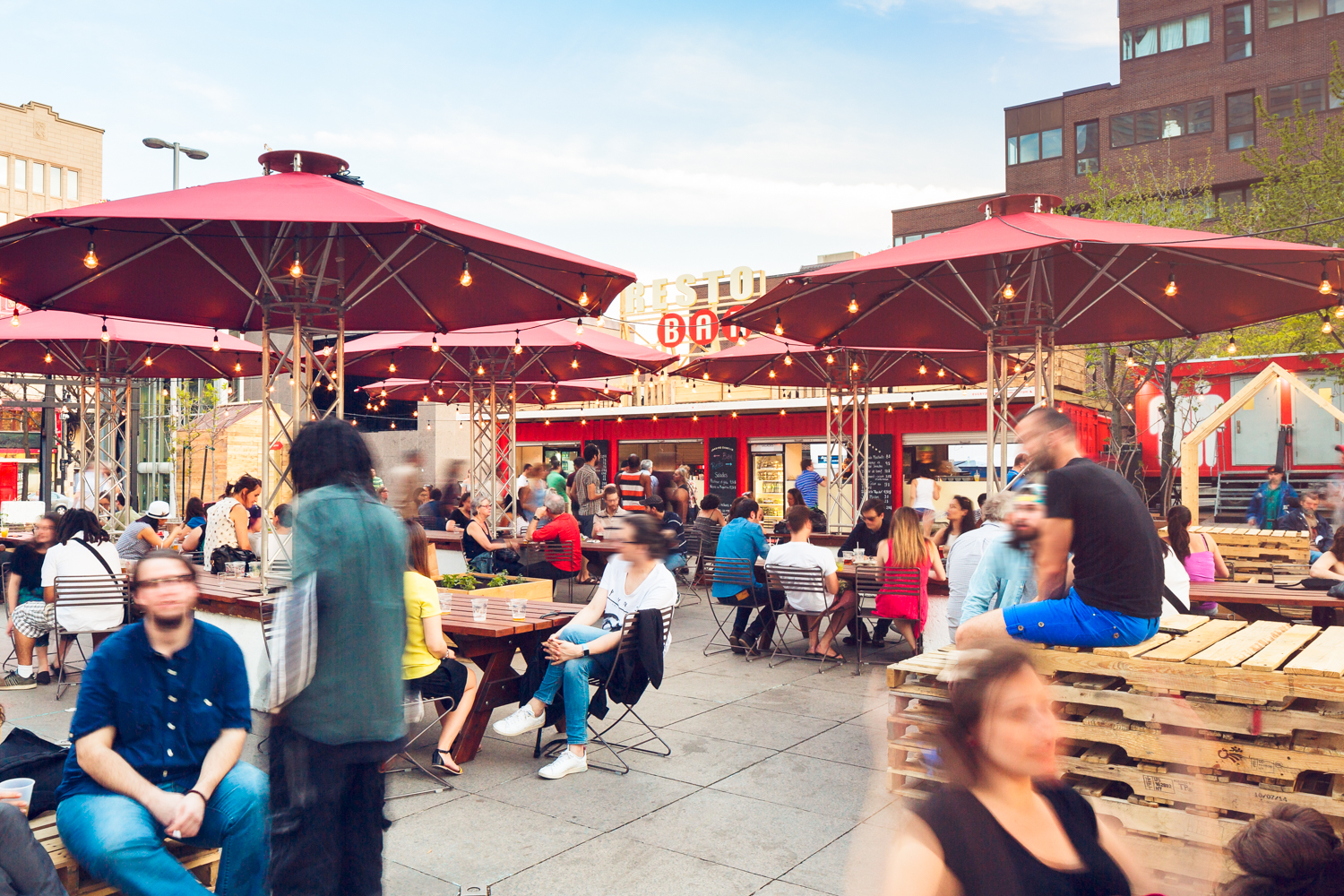 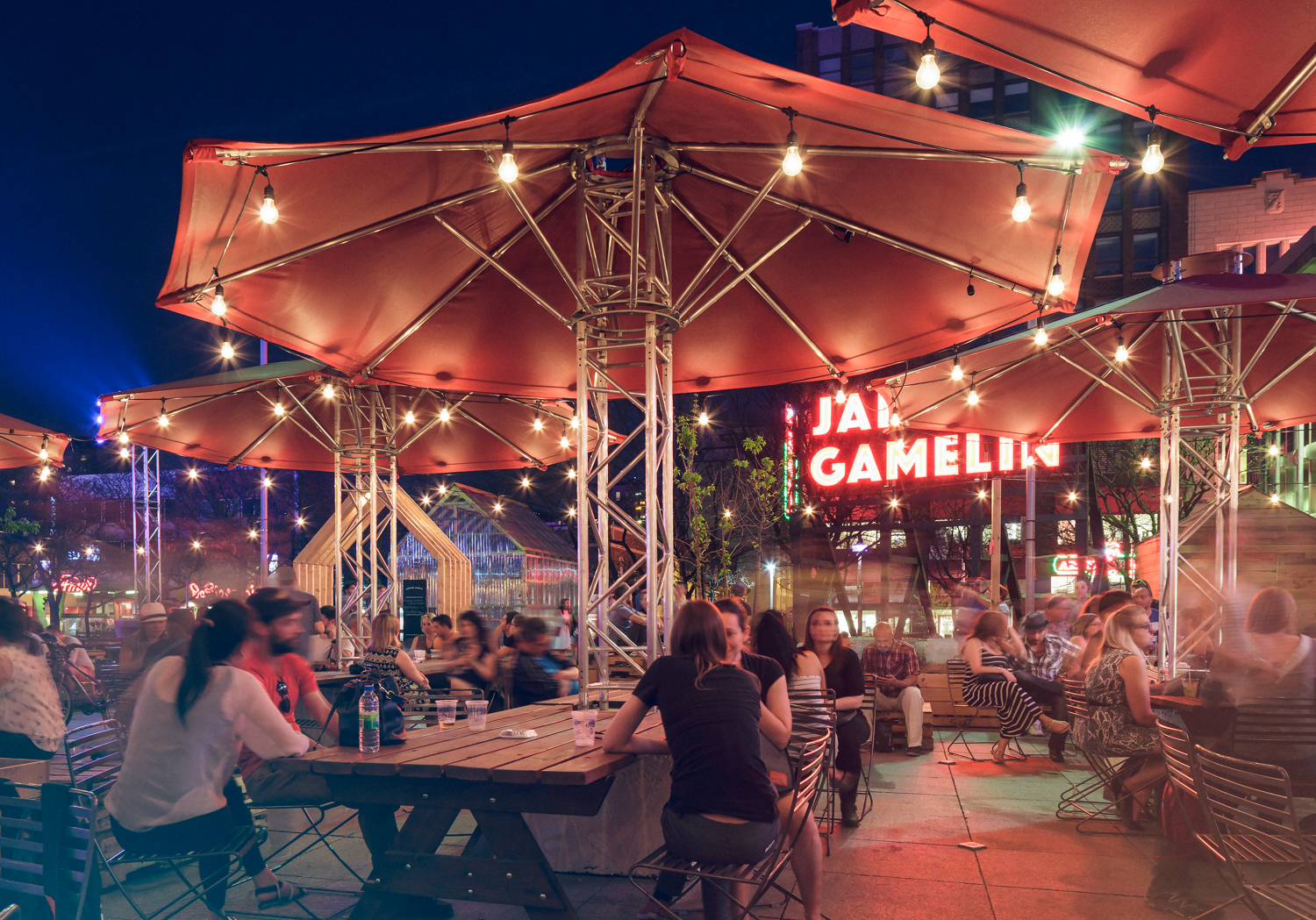 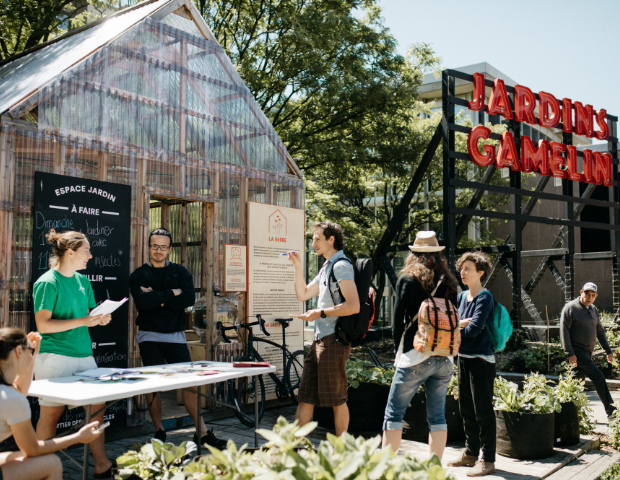 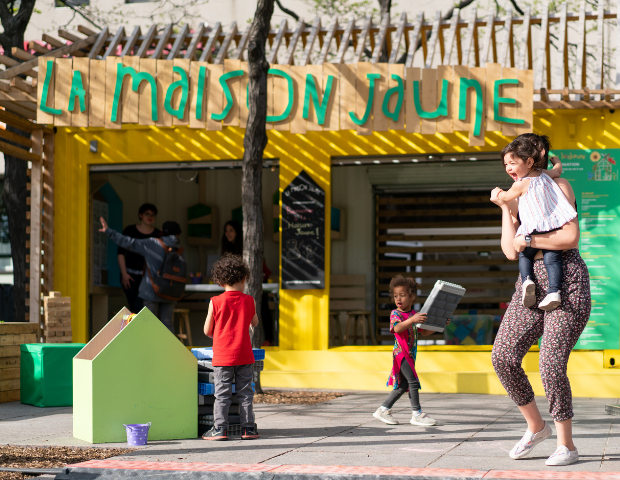 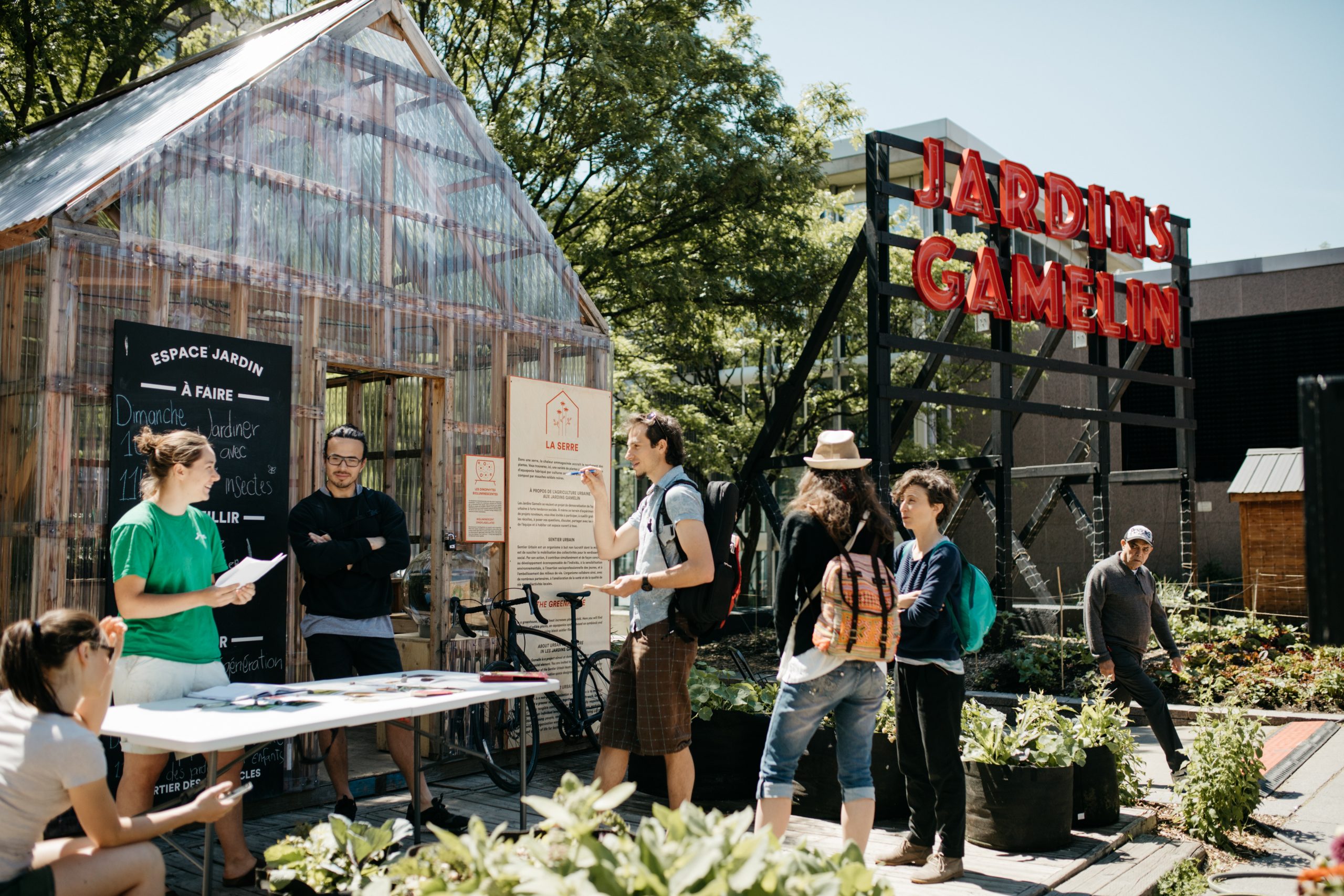 Place Émilie-Gamelin revealed a new look to residents and visitors in the form of Jardins Gamelin, in place from May to September. A large, welcoming, green space in the heart of downtown Montreal, Jardins Gamelin are an original temporary setup comprising several multifunctional facilities : repurposed shipping containers hosting bar and restaurant services, a large patio covered by a luminous canopy, a stage, and areas dedicated to urban agriculture and a local produce market. Seven days a week, day and evening, the space hosts cultural and citizen-oriented activities. The initiative, led by Quartier des Spectacles Partnership, was created with Pépinière&co.

The commission work was the placemaking of the Place Émilie-Gamelin, a central space in the city which was an underappreciated space. It was crucial for the Quartier des Spectacles Partnership (PQDS) to set it up as a real hub for the Quartier des Spectacles. We approached Pépinière&co to work together to come up with ways to revitalize Place Émilie-Gamelin. This first large-scale project encouraged many Montrealers to re-adopt the central space; it is also aimed at making Place Émilie-Gamelin one of the city’s signature tourist attractions.
The Jardins Gamelin project resulted in the creation of a large urban space that was welcoming and green – the ideal spot for hosting a variety of events of different scales. Urban agriculture was an important part of the Jardins Gamelin. The Jardins had also the goal of democratizing and promoting urban agriculture at its heart. It’s a human-scale project that brings people together. Janet Echelman’s illuminated floating sculptural work,1.26, lent a touch of poetry to the site. Ms. Echelman was delighted with the choice of site, revitalized by the Jardins Gamelin project, because her work is about change. She was touched to see how the space has been transformed.

By making Jardins Gamelin temporary we could test the concept at a lower cost and then make any necessary adjustments, which makes the project participatory and flexible. By staying alert to how people respond, we were able to think of ways to make the project more relevant. Over the summer, we added art works from local artists as well as adjusting the type of activities programmed to the different visitors. We offered a wider range of activities. For five months, the PQDS and Pépinière&co offered Montrealers over 230 activities to please every taste and style, not to mention the festivals that used the space :OFFTA, Montréal complètement cirque, Montreal Pride, Piknic électronik.
Janet Echelman has her own team of designers, artisans, computer scientists and aeronautical, mechanical and lighting engineers, but the installation and the enlightening of her work was creadted by PQDS team. The illumination of 1.26 is synchronized with that of the sculptures and waterfalls of the work by Melvin Charney, located on the grassy part of Place EG, a lighting project that was created by the Partnership. The projection site next to Jardins Gamelin presented 9 x [MTL], adding to the nighttime ambiance in true Quartier style.

The Jardins Gamelin is about citizens and community and had an impact far beyond the cultural component. It’s a human-scale project that brings people together. We were working in a sensitive part of the city, beset with social problems. We shared the desire to turn the site into a driver of change, with the participation of the existing marginalized populations. Local organizations were involved and used agriculture to break through social isolation. Jardins Gamelin is a great example of successful social cohesion. It is a model project for the reclamation of urban space and is back in 2016.