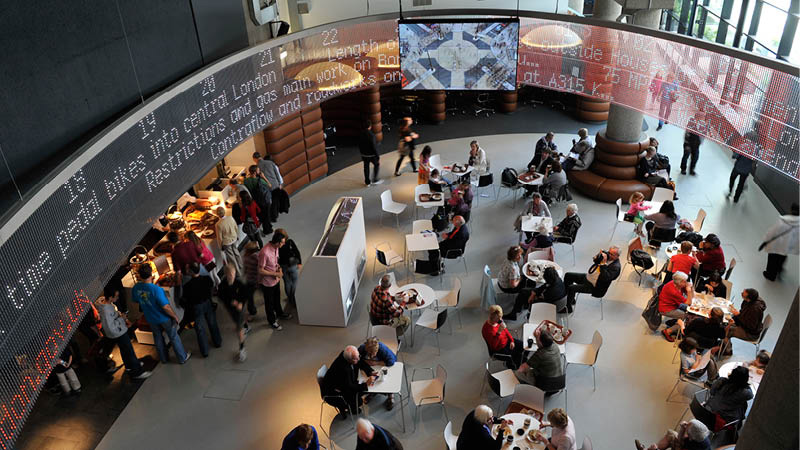 This project was a media art commission for the Museum of Londons new Sackler Hall space. This space was created as part of a larger re-fit of the museums modern galleries and was designed to be used as a cafe and an event space for commercial hires. The av for the space, the LED curtain and array of screens was part of the architects concept so we had to propose something that used this technology and responded to the space. It had to represent London in the 'now'.

The concept for the space came from studying the number of LED rods in the design and contemplating the idea of "time" following a visit to Stonehenge. The idea was to use the LED surface as a giant RGB clock that would display current facts and statistics related to London in response to a 30 minute long film that reveals a 24 hour cycle of the city.

We decided to shoot everything with a strict rule of thirds to connect with the 3 x 3 block of screens. We wanted the film to present an anthropomorphic view of the city; to allow the viewer to contemplate the city as a organism rather than to present a touristic view.

For the LED screens we invited software developers Field.io to turn our design into a working reality. The final program used a mixture of live RSS feeds and a database of statistics that we gathered that relate back to the scenes and locations in the film.

I was the leading artist on the project, working in collaboration with my studio and group of different camera men on the filmmaking, Alice Ceresole produced the project, Malcom Litson was the sound design with Field.io developing the software for the LED screens.

Electrosonic where the AV suppliers

It was originally commissioned to run for 2 years, but has been so successful that it hasn't been recommissioned and remains in the museum to this day.