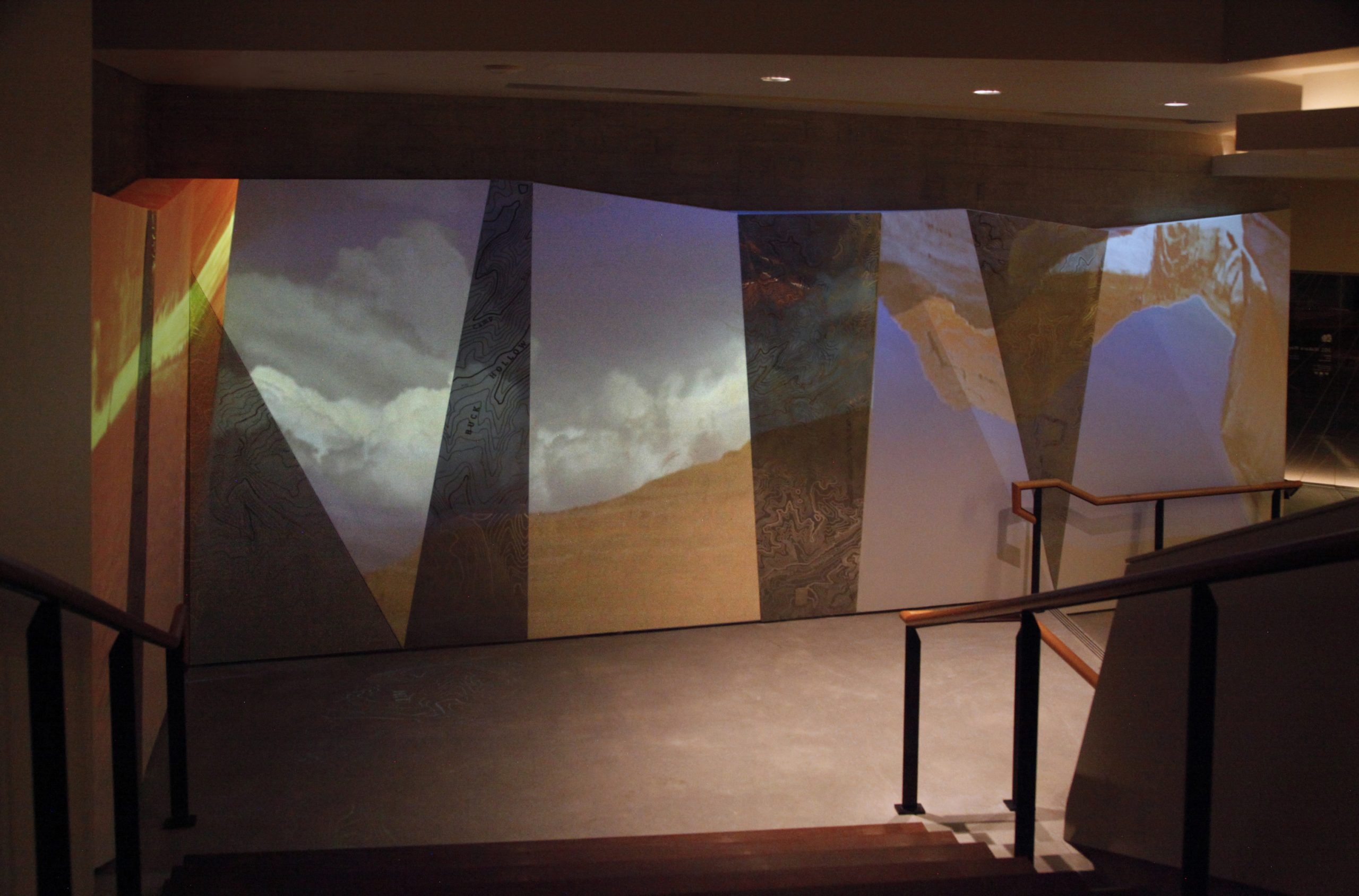 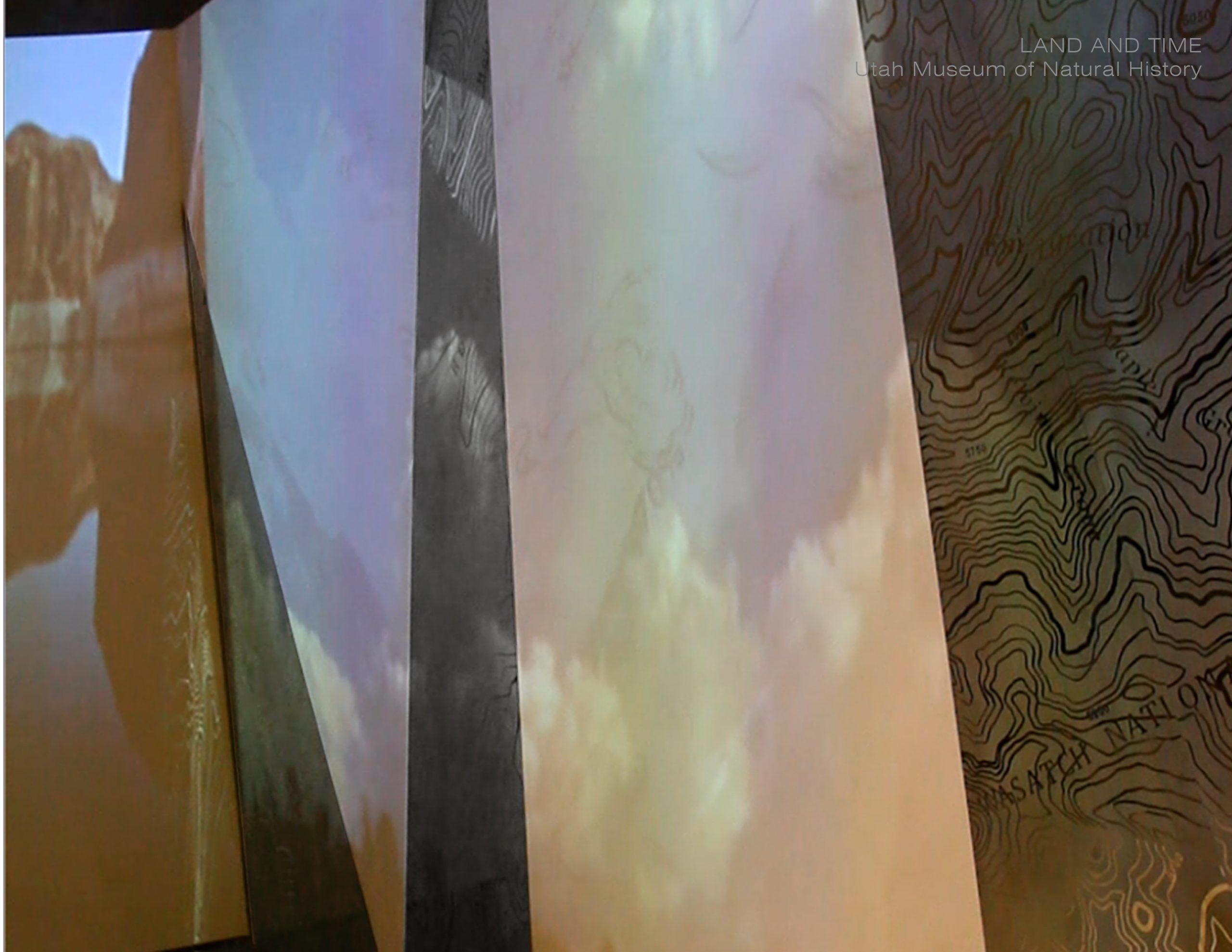 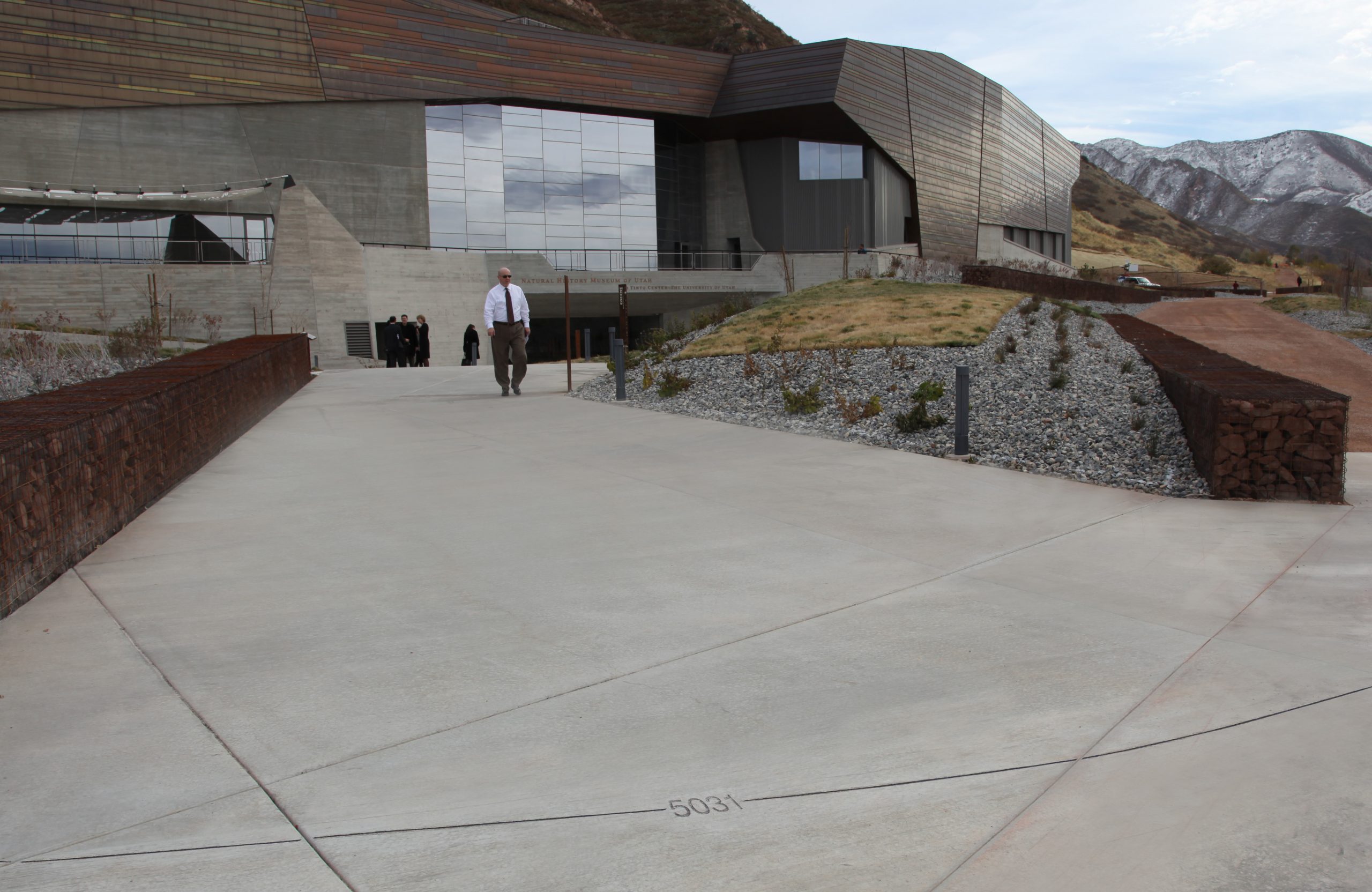 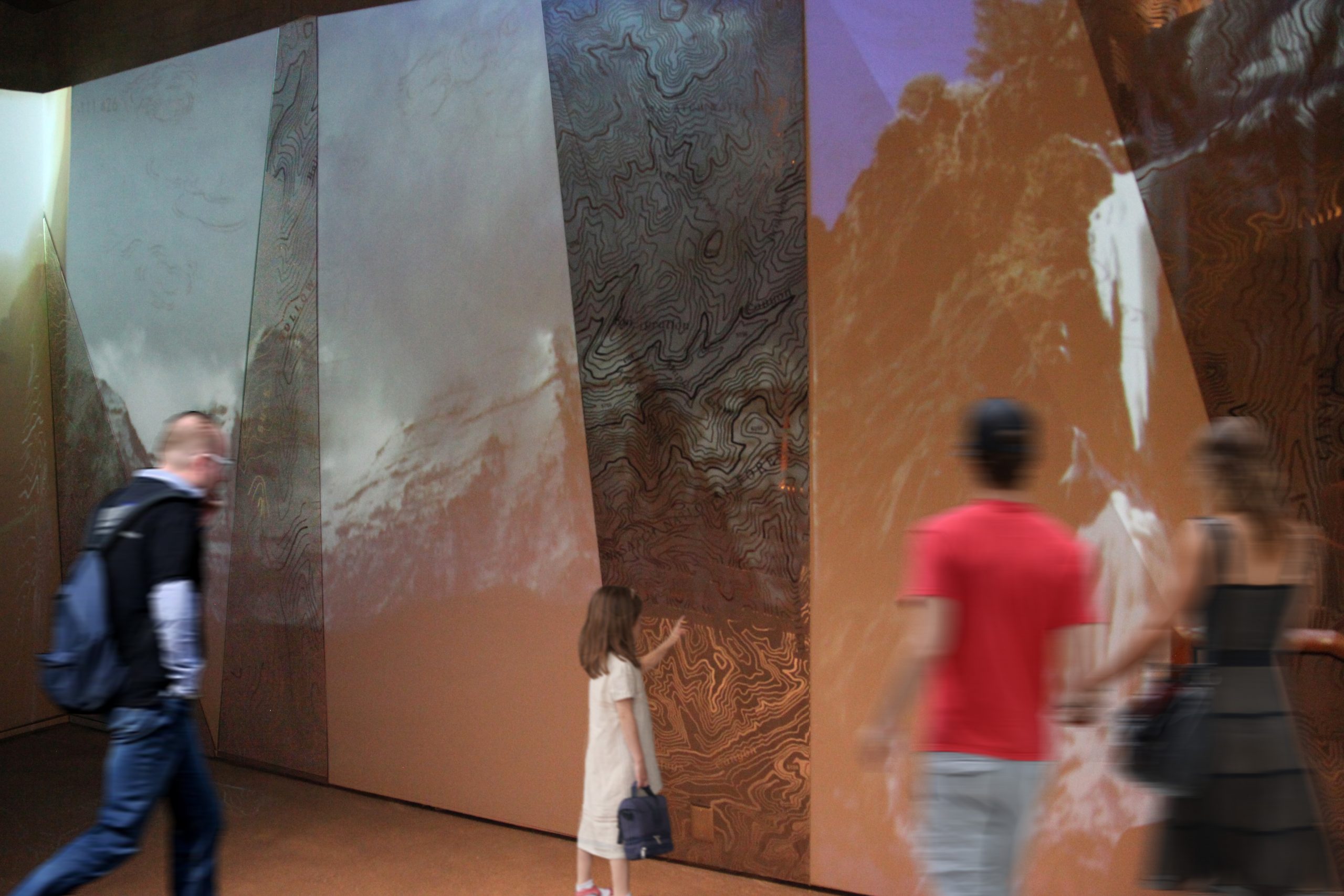 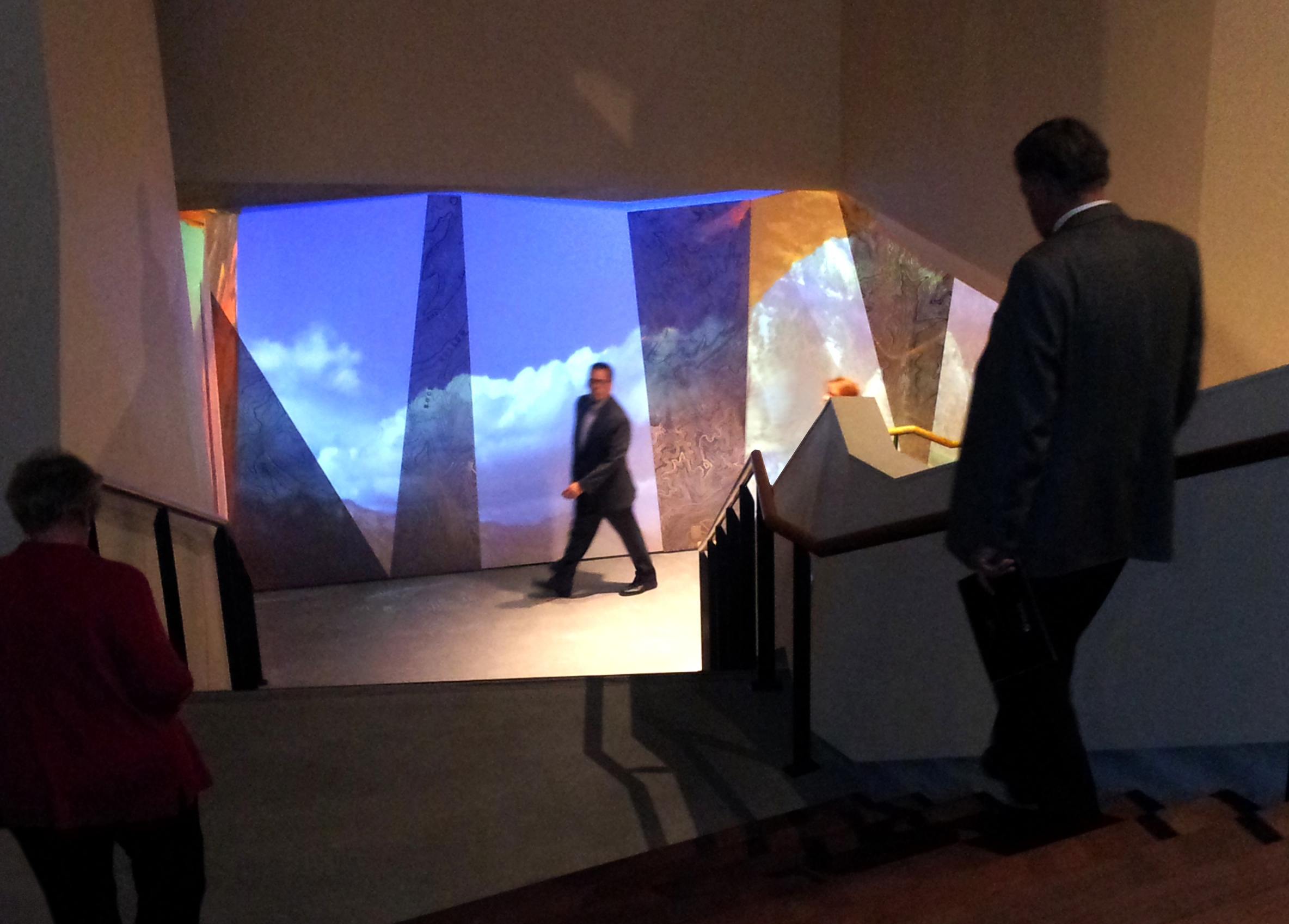 This project makes use of mapping – both literally and conceptually – to contemplate how we understand our environment. It draws first upon what we can readily see, and then makes visible the profound forces that underlie and shape that physical world. It begins outside the museum. Topographic lines etched into pathways record the memory of the site's natural terrain, a snapshot in an ever-changing landscape. Inside, another kind of mapping marks the entry and leads into the museum's exhibition halls. Here, a digital mural connects the viewer to the environment and the powerful forces continually shaping the planet.

We were commissioned by the Natural History Museum of Utah to create an artwork that would give form to its mission – to celebrate the natural world and the place of humans within it. The museum is sited within a canyon of the Wasatch Mountains. The artwork marks the entry. It takes its formal inspiration from both the site and the faceted planes of the museum’s architecture.

Land and Time creates a visual montage of Utah's canyons. Shifts in scale and perspective allow us to find our place within, and reflect upon the land around us. The faceted planes of the artwork are made of reflective and non-reflective surfaces in which the visitor becomes both the observer and the observed. RSS feeds add a constant stream of data that reveal environmental factors continually shaping the canyons and the planet as a whole. This real-time component displays ongoing climate and seismic conditions throughout the state, placing the individual within the data stream, an ever-changing current that speaks of the interconnectedness of events and decisions. The artwork becomes a window into the environment and a meditation on our place within it - a visual expression of the museum’s mission.

Construction had just begun on the museum when we received this commission. Given the fast-track schedule, we worked closely with the architectural team to integrate the artwork within the building. It was critical that the projection system be invisible to the viewer, as it was located within the grand entry stair. Our collaboration resulted in a design using ultra-short throw projectors tucked within slots in the ceiling, not visible but able to project onto the full height of the artwork surfaces.

Primary, was our collaboration with the museum. We worked closely with the director and museum staff in the realization of the artwork content. We developed a state-wide matrix to collect real-time streaming data of environmental conditions. The tectonic layer was received from the museum seismographic station.

The complex interactions between pre-recorded footage, real-time data, and the form of the artwork itself presented technical challenges. We collaborated with Todd Marks, a technical supervisor of feature films, to develop a system of projectors, computers, software and custom programming. Aaron Siegel and Susan Narduli collaborated on the data visualizations of the particle systems overlaid on the video, streaming real time environmental factors and displaying them as they are occurring.

Public Art Year in Review, Americans for the Arts Best Public Art of 2011