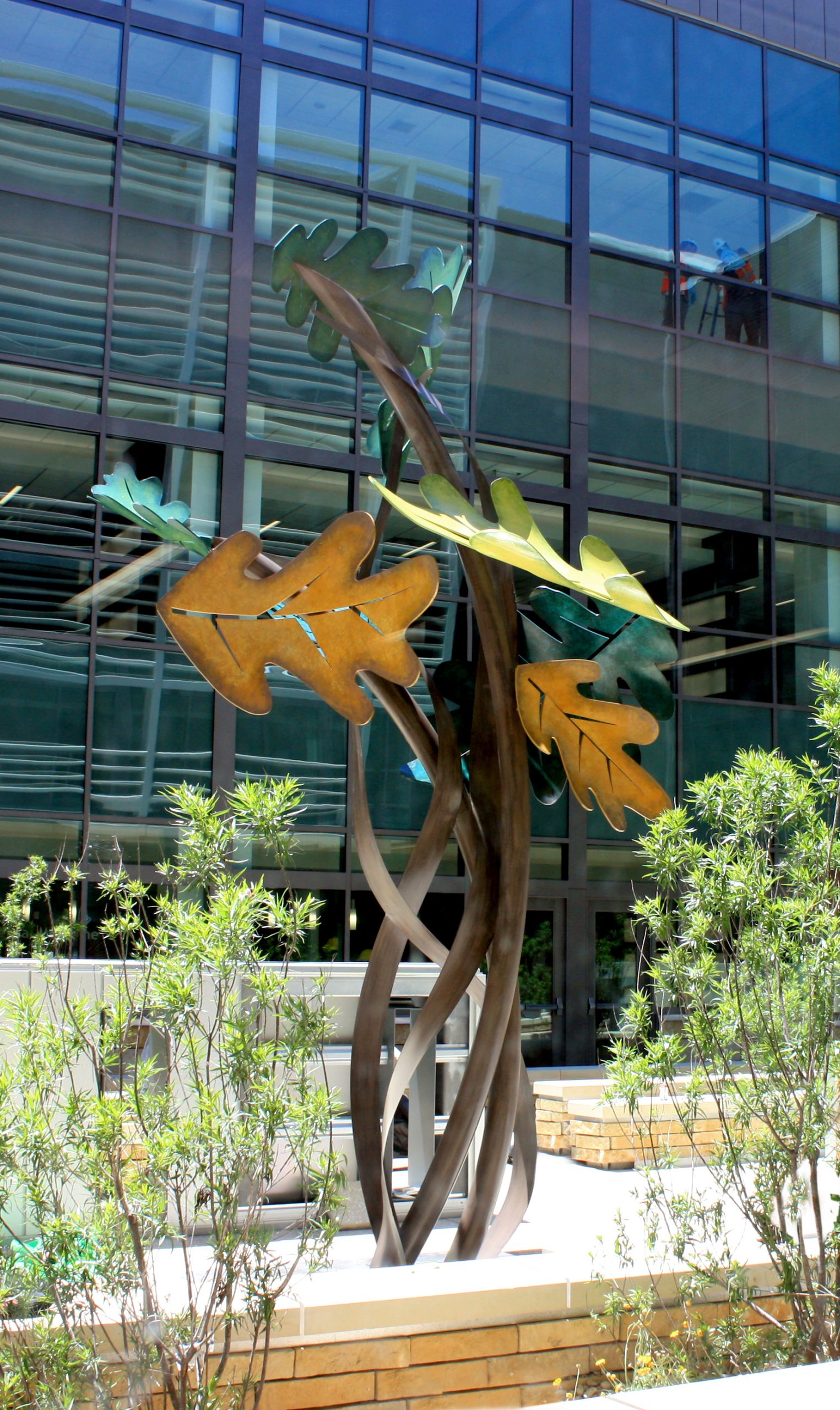 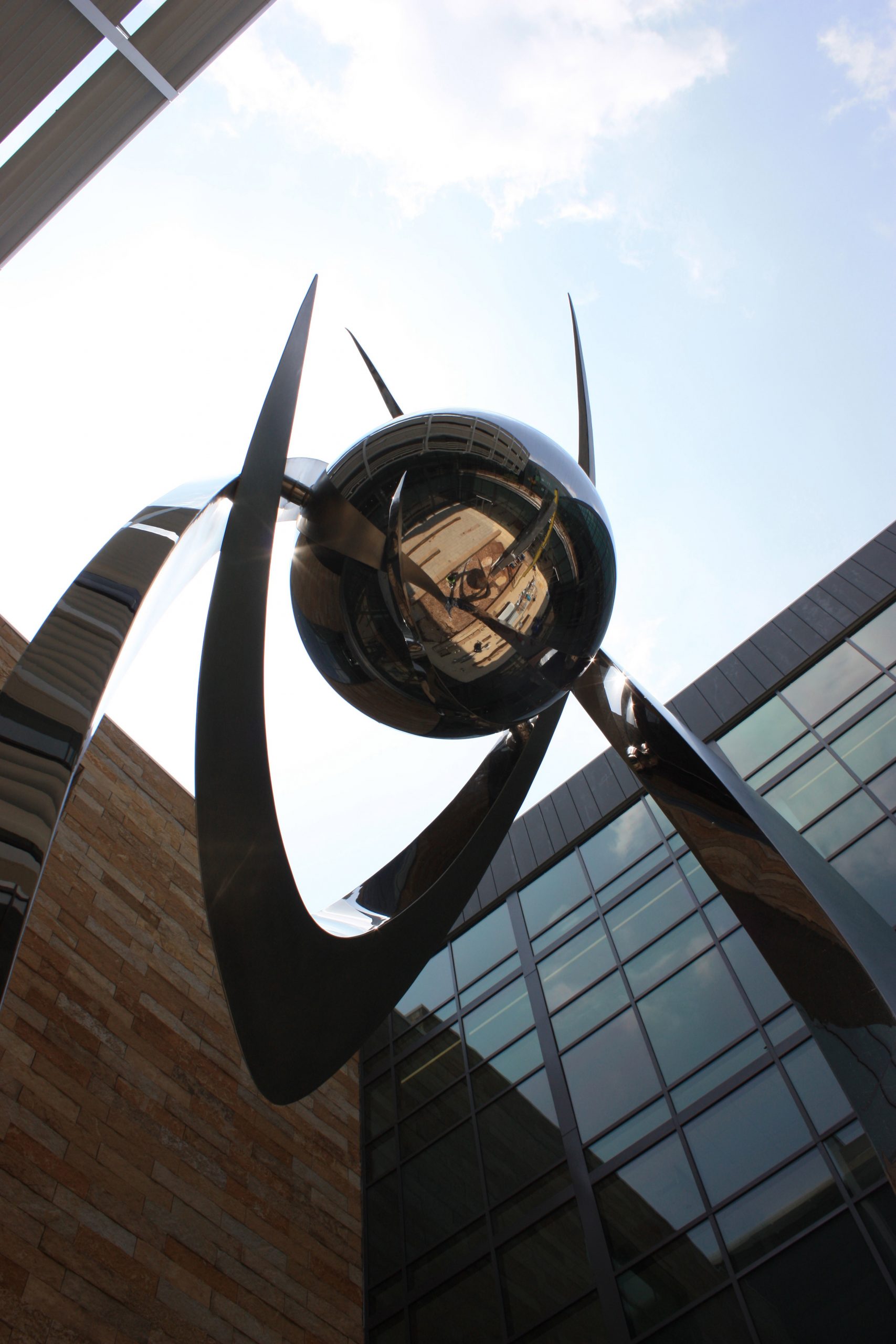 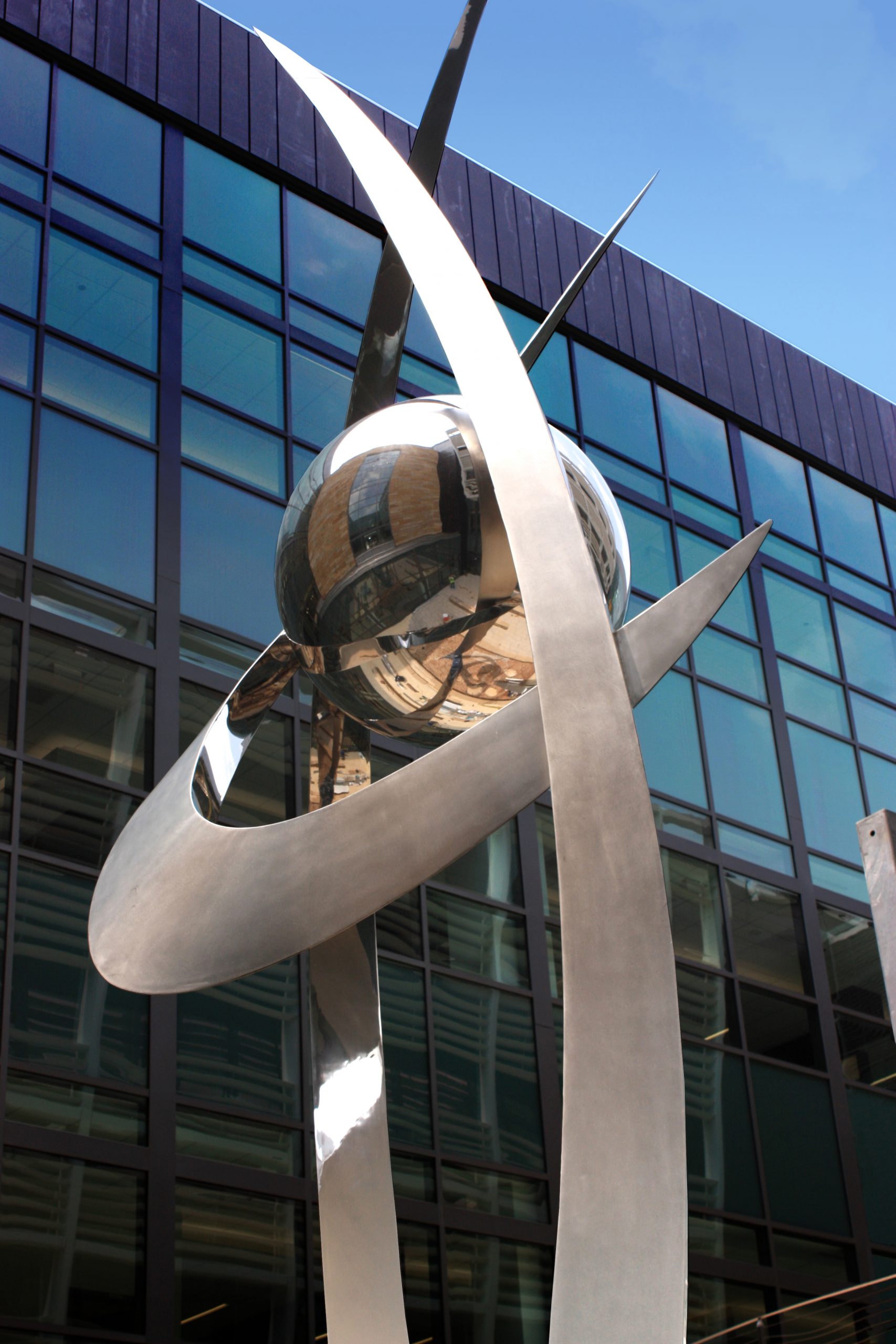 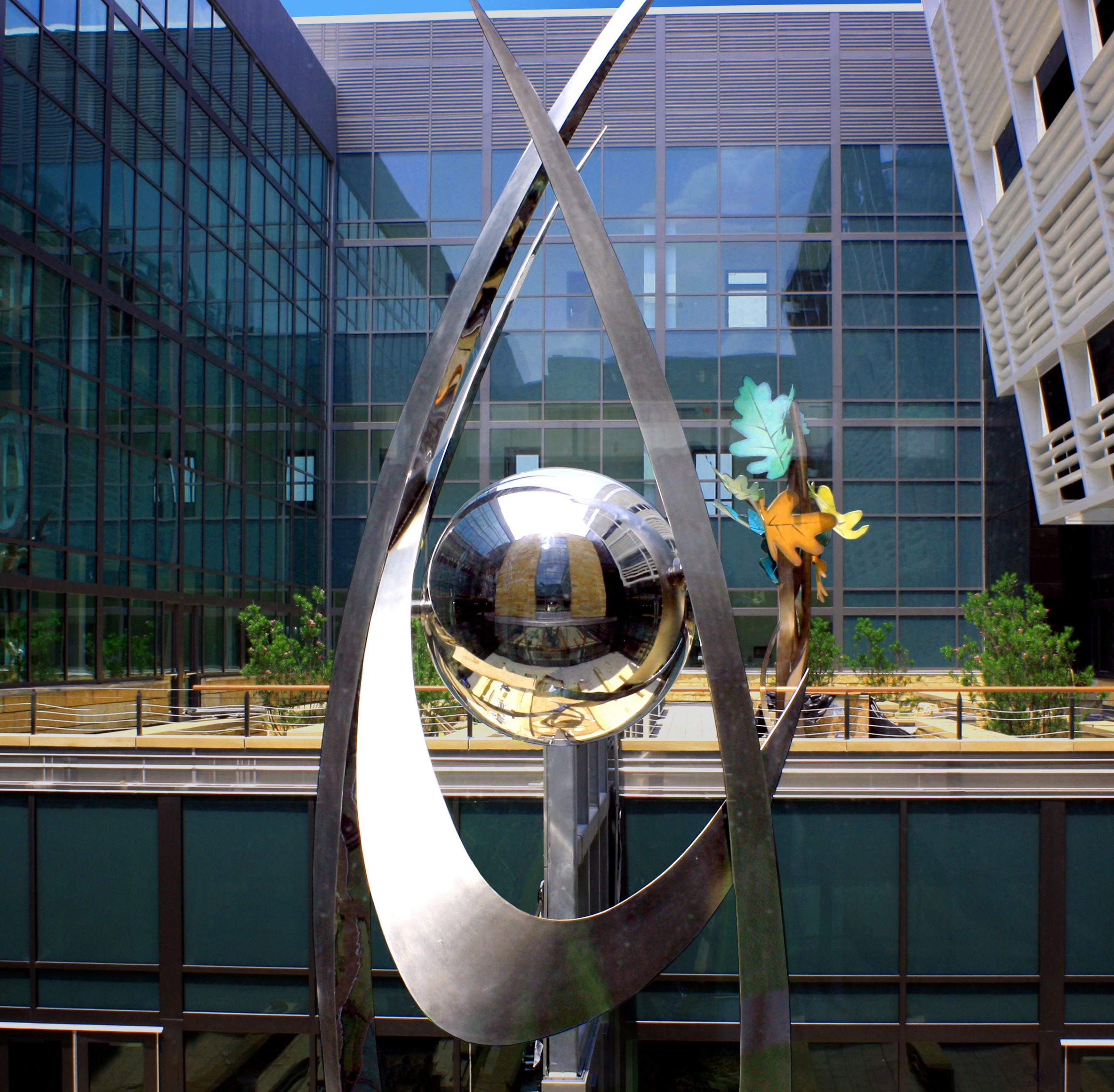 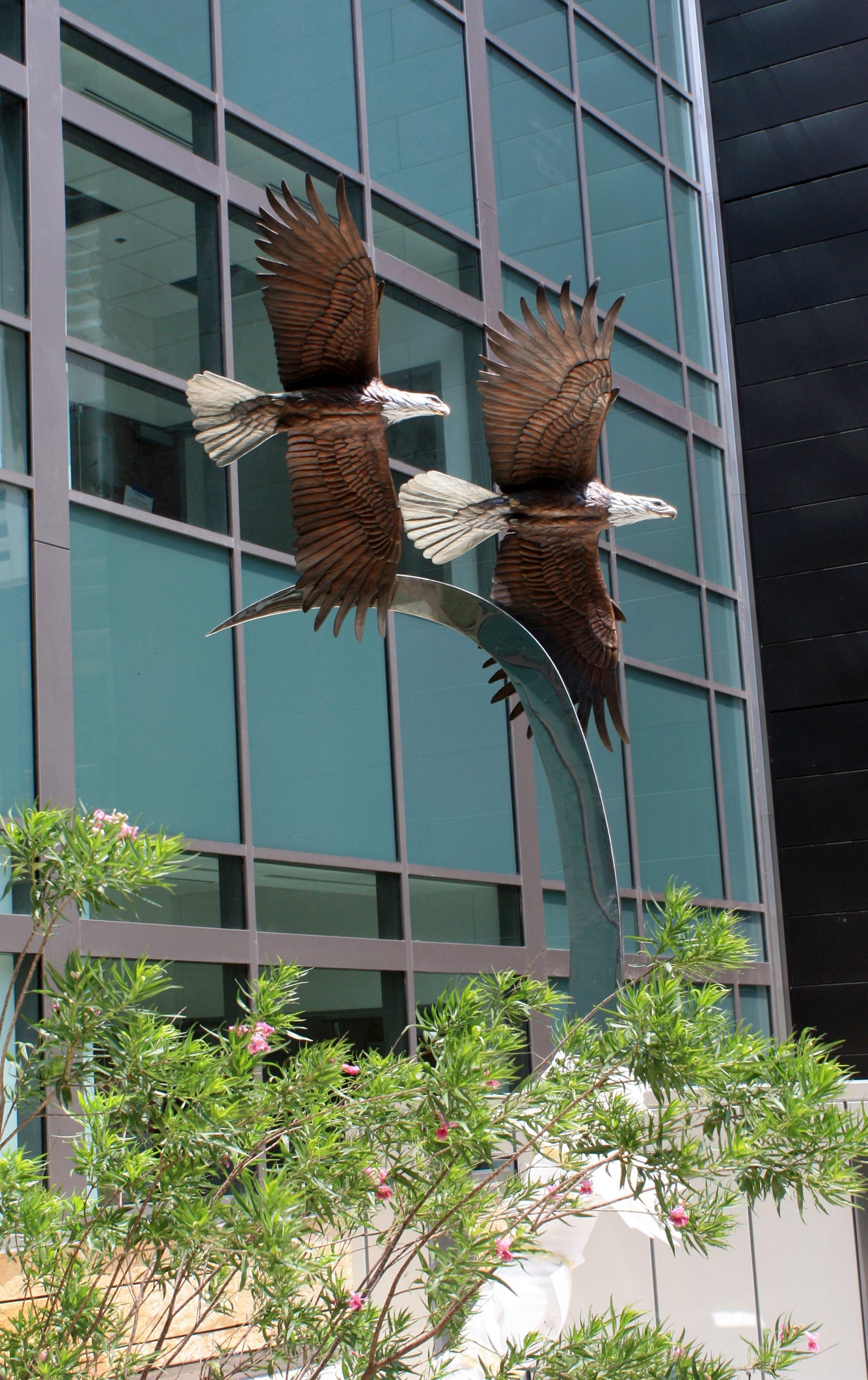 Flight, movement and space are the inspiration behind three stunning stainless steel and bronze sculptures that make up Lackland Air Force Base, located in the surgical center’s two-story courtyard/garden. Two 18-foot-sculptures grace the second level: “Majestic Flight” features two magnificent bald eagles in mid-flight, gliding above the garden; and “Circling,” punctuated by large, multi-colored leaves gliding in the breeze, exudes a gentle calm and connects visitors with the healing power of nature. The signature piece is the two-story-high “Soaring,” which envisions the idea of space with its sleek, dramatic curves. All three sculptures are visible from the courtyard entrance.

To best highlight Lackland’s themes of flight, movement and space, we wanted the surgical center’s visitors to simultaneously experience the grandeur of flight (“Majestic Flight”), feel the peaceful, reflective sense of nature (“Circling”), and be inspired by the mysteries and adventure of space (“Soaring”). To achieve the desired dramatic impact of the three elements, our central showpiece, “Soaring,” reaches for the stars by traveling skyward, spanning both levels of the courtyard and visually encompassing the other two sculptures.

Placzek Studios enjoyed an outstanding collaborative experience with everyone involved with Lackland Air Force Base. Matthew worked closely with the project’s interior designer and project director, who both work for SIOTS, a procurement company hired by the government to fill interior spaces. They organized presentations with the base commanders, served as site coordinators, and oversaw foundation drawings and installation.

The installation itself was particularly challenging. Because “Majestic Flight” and “Circling” were to be placed on the courtyard’s second level, the project engineer had the difficult task of drawing up plans for a foundation that would be incorporated into the roof – no easy feat. In addition, the project’s installation was a monumental challenge, as the sculptures had to be put into place from outside the building. A 450-ton crane that extended 500 feet high was brought in for the job, and during the process, all air traffic on the base had to be halted for several hours.

Overall, the team effort for this project – from start to finish – was exemplary.