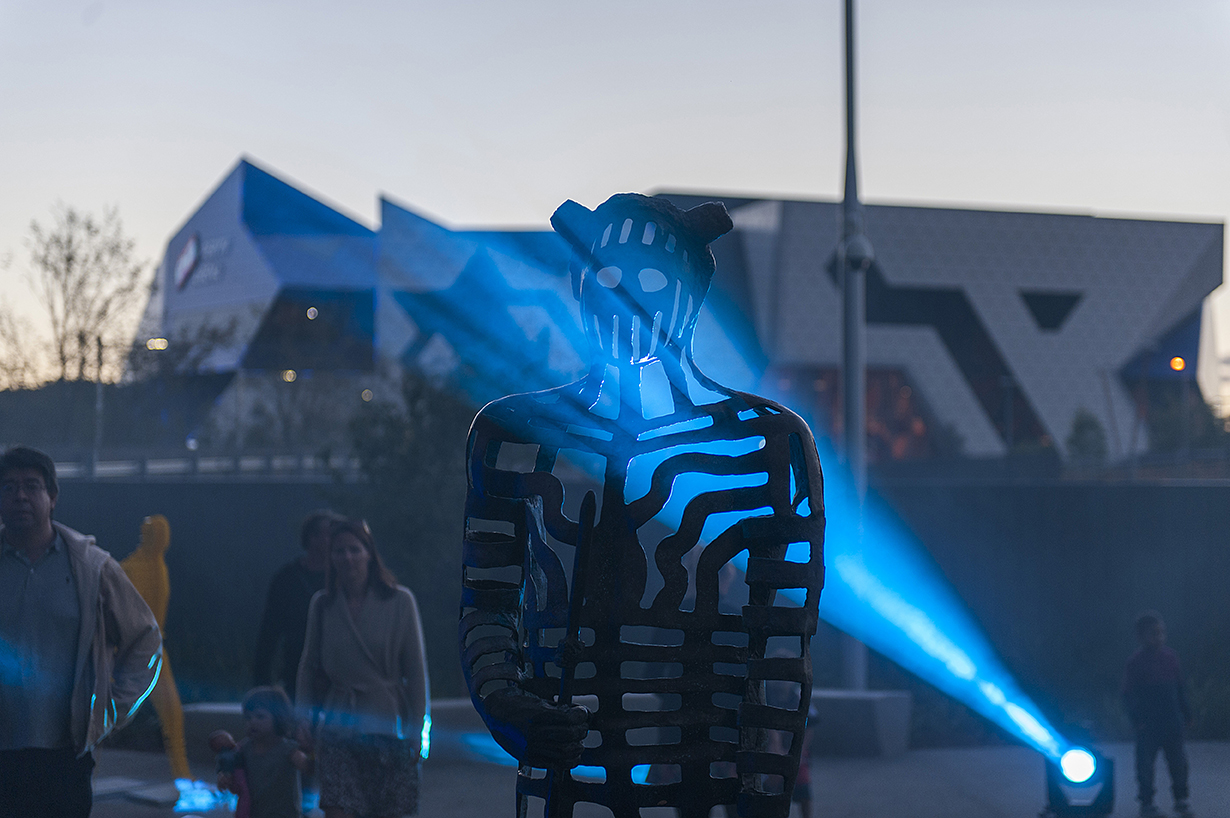 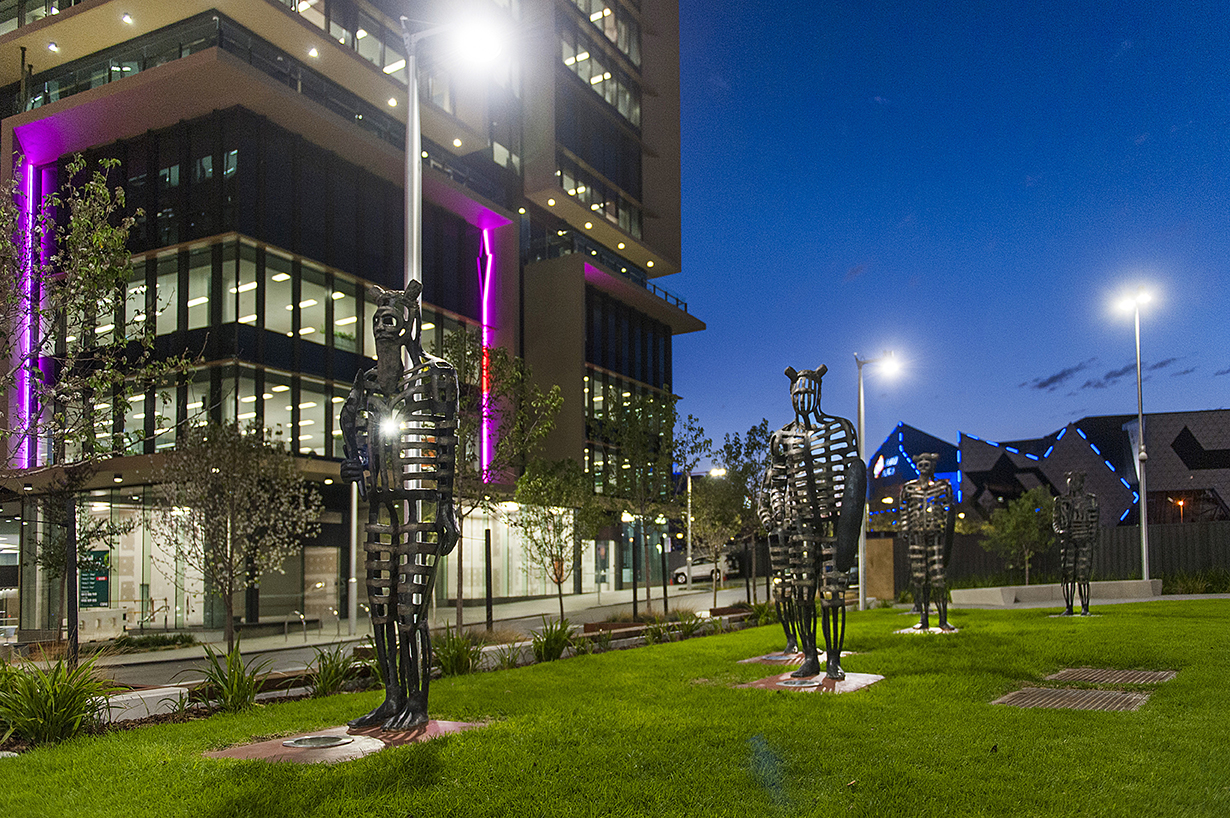 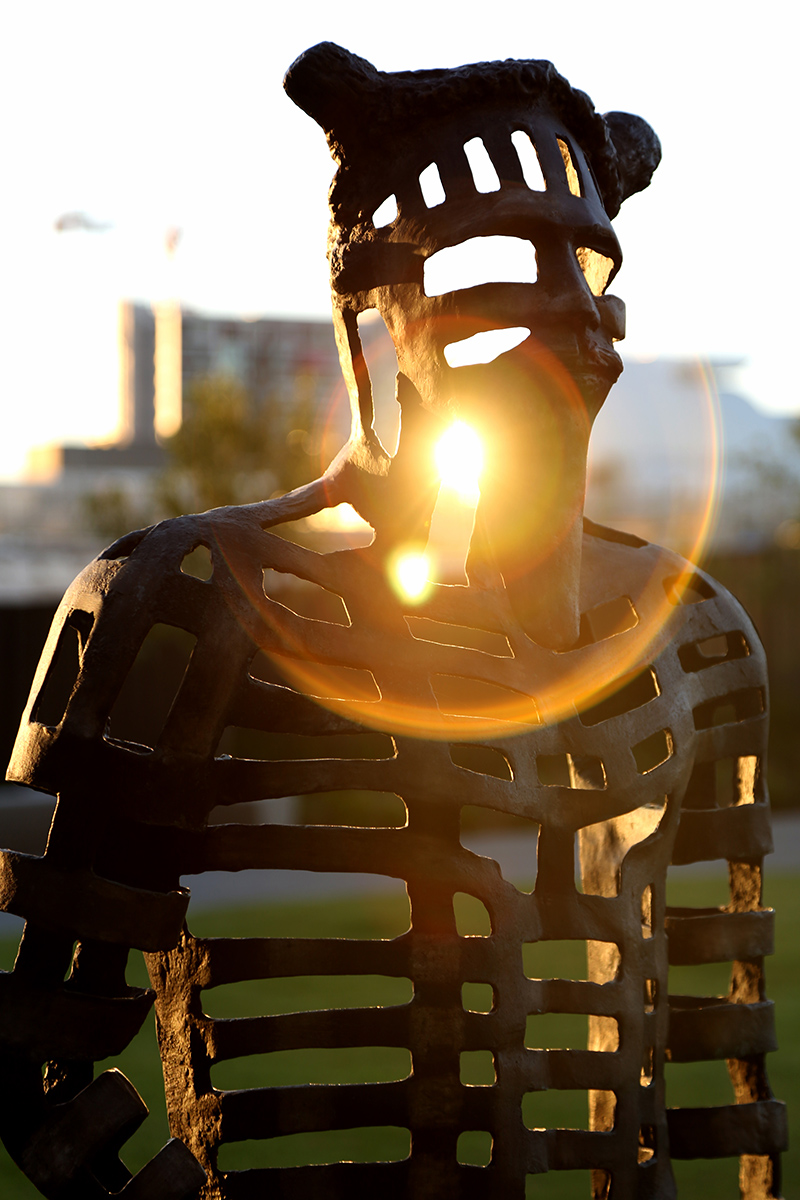 "Koorden" is a landmark Aboriginal series of sculptures in response to the rich history of the Kings Square Wellington Koorden Gardens site in Perth City Link. The majestic 2.2m tall cast bronze figures epitomise powerful skeletal figures, symbolising leaders of Aboriginal cultural groups around Perth. Accomplished through extensive consultation with local Noongar elders, the project was lead by a Whadjuk, Ballardong Noongar artist, Rod Garlett, in collaboration with artist Richie Kuhaupt and architect Fred Chaney, to form part of an overall $1.8million public art strategy for Kings Square under the theme of linkages and connections.

Engagement with the Noongar communities from the early stages of the project provided essential opportunity for the Elders to play their role as leaders of cultural practices and perpetuate their traditional knowledge of Noongar country. These extensive consultations developed a contemporary Indigenous response to the site of the former chain of lakes between Lake Monger and Claisebrook that provided an important source of food and fresh water, and was a ceremonial ground for the Aboriginal people who inhabited the area prior to English settlement in 1829. Coordinated by Noongar advisors, Carol Innes and Barry Maguire, the discussions enabled Garlett to interpret the distinctive ceremonial markings of the sculptures from those found in historical photographs. The sculptures give public recognition to the traditional landowners of the site, and were given a smoking ceremony and received a welcome performance by Phillip Walley-Stack. Visitors to the gardens can engage directly with the figures and stand amongst them to absorb the context of contemporary Perth and Noongar culture.

Leighton Properties commissioned Artsource to scope, procure and manage a public art project in Wellington Gardens with a significant Noongar community consultation component as part of their Kings Square Percent for Art requirements for the MRA. The artist team were commissioned to conduct community consultation to inform the creation of the six bronze sculptures. Production began with Rod Garlett’s creation of six canvasses representing the body markings symbolising leaders of Aboriginal cultural groups around Perth. From these paintings, Richie Kuhaupt produced base figures and fibreglass moulds. The individual body markings as well as ceremonial headdresses and ceremonial sticks were applied to the moulds, leaving only the frame-like form of the body markings for the bronze casting and finish in light, patinated bronze. The sculptural framing and configurations includes vertical elements on the lower leg sections to minimise climbing risk and maintain structural integrity. A complementary mentoring project, saw emerging artist, Tash Gillespie, create a body of photographic works on the Aboriginal Elders and artists involved in the Koorden project as well as the making and installation process of the artworks.