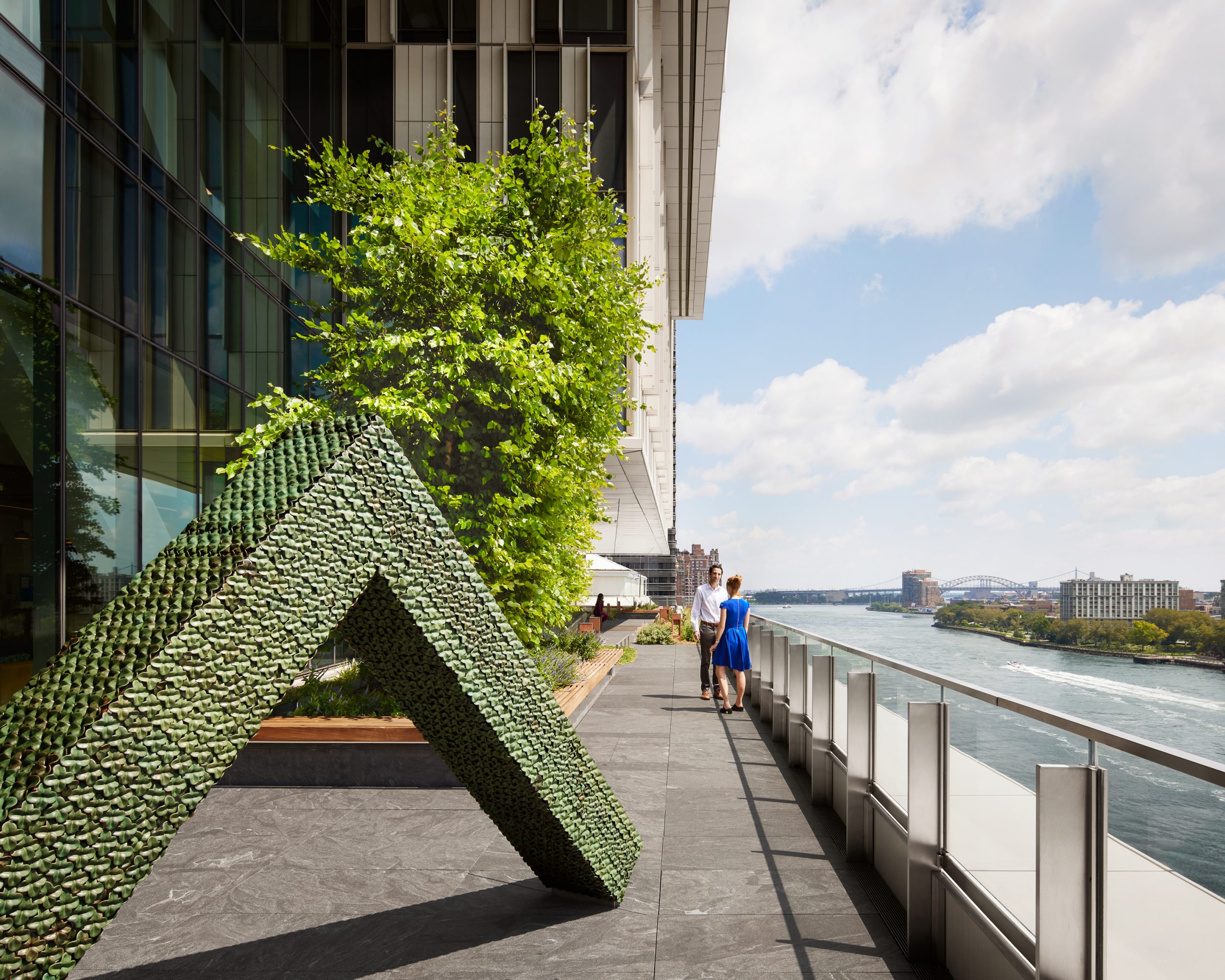 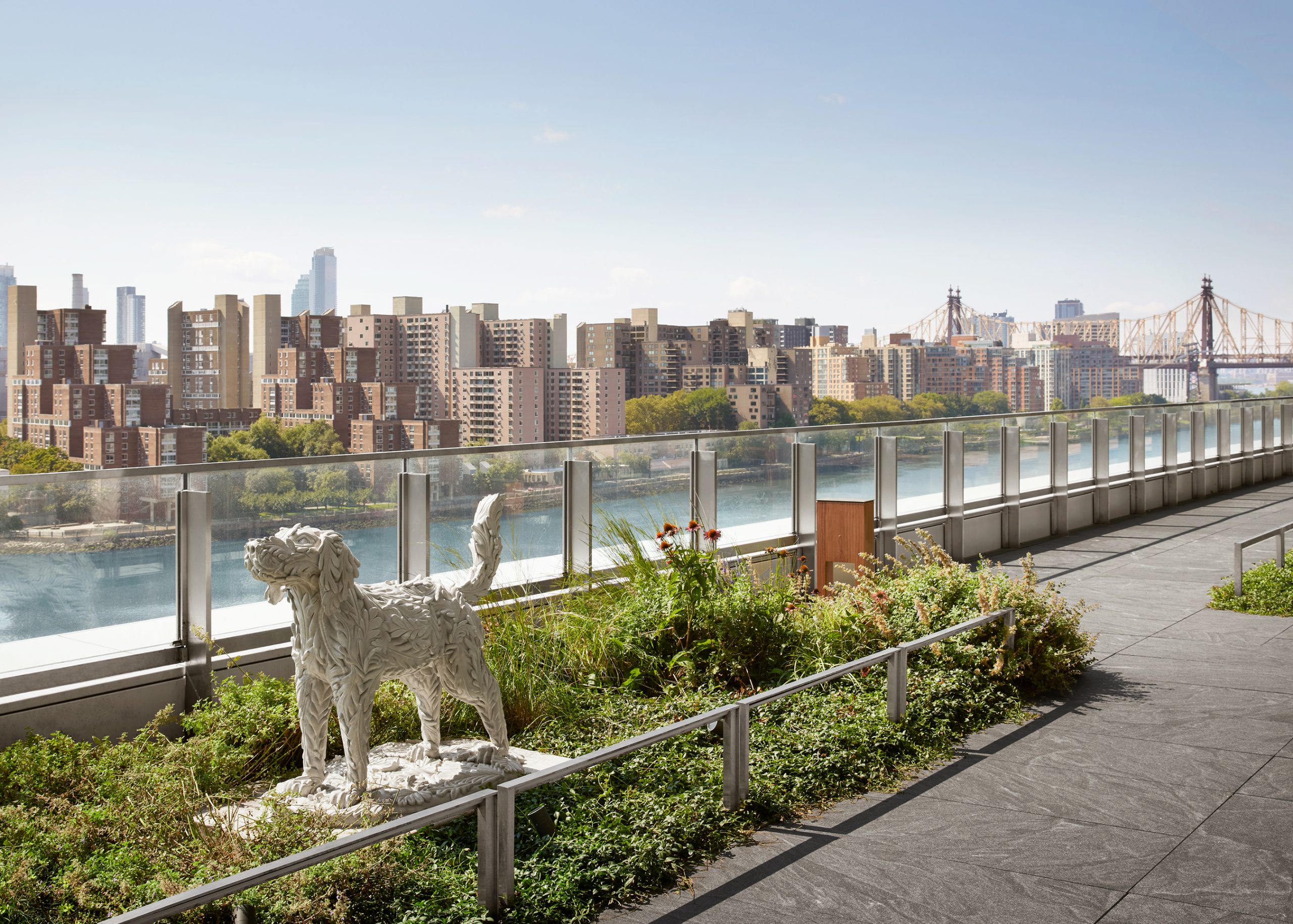 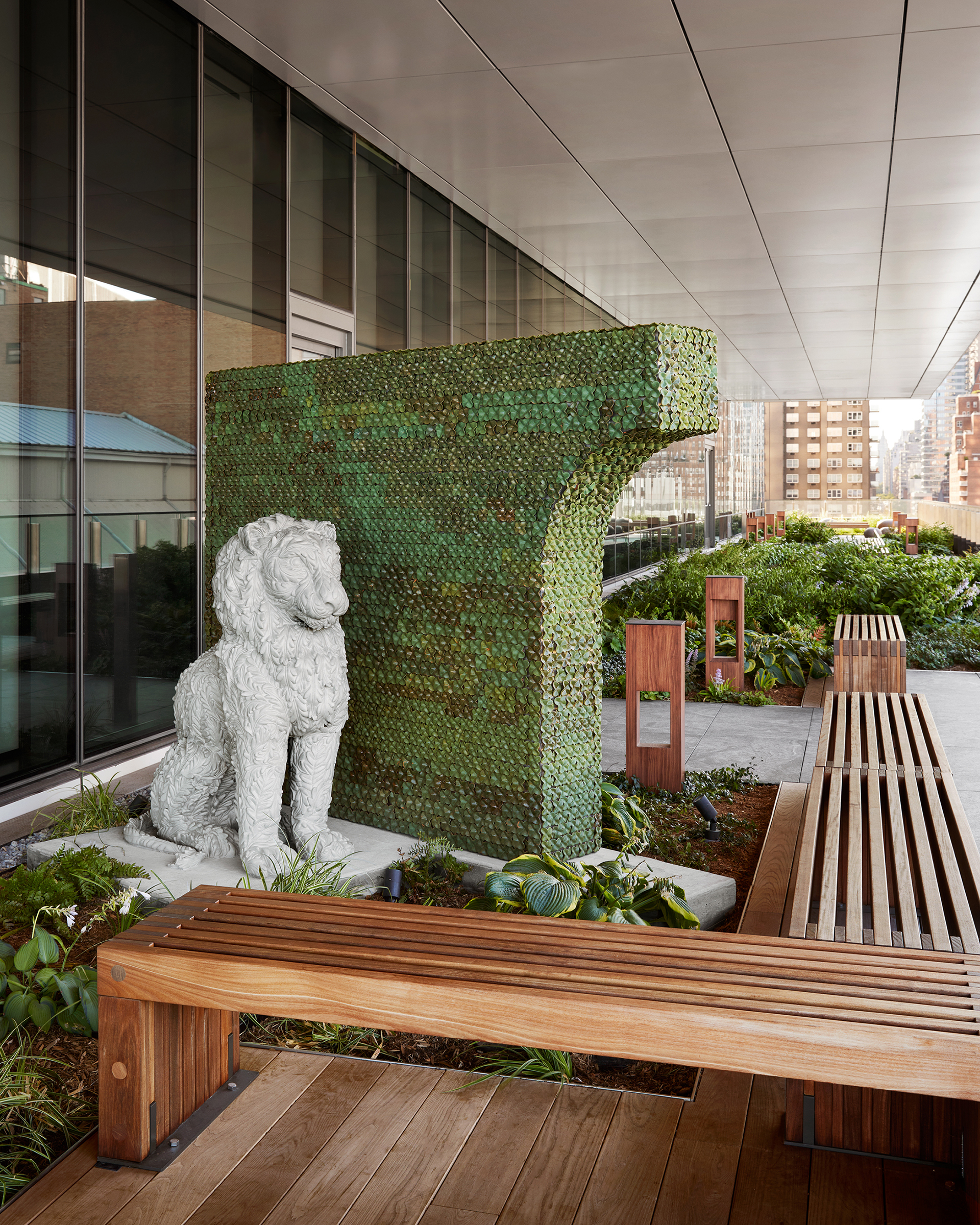 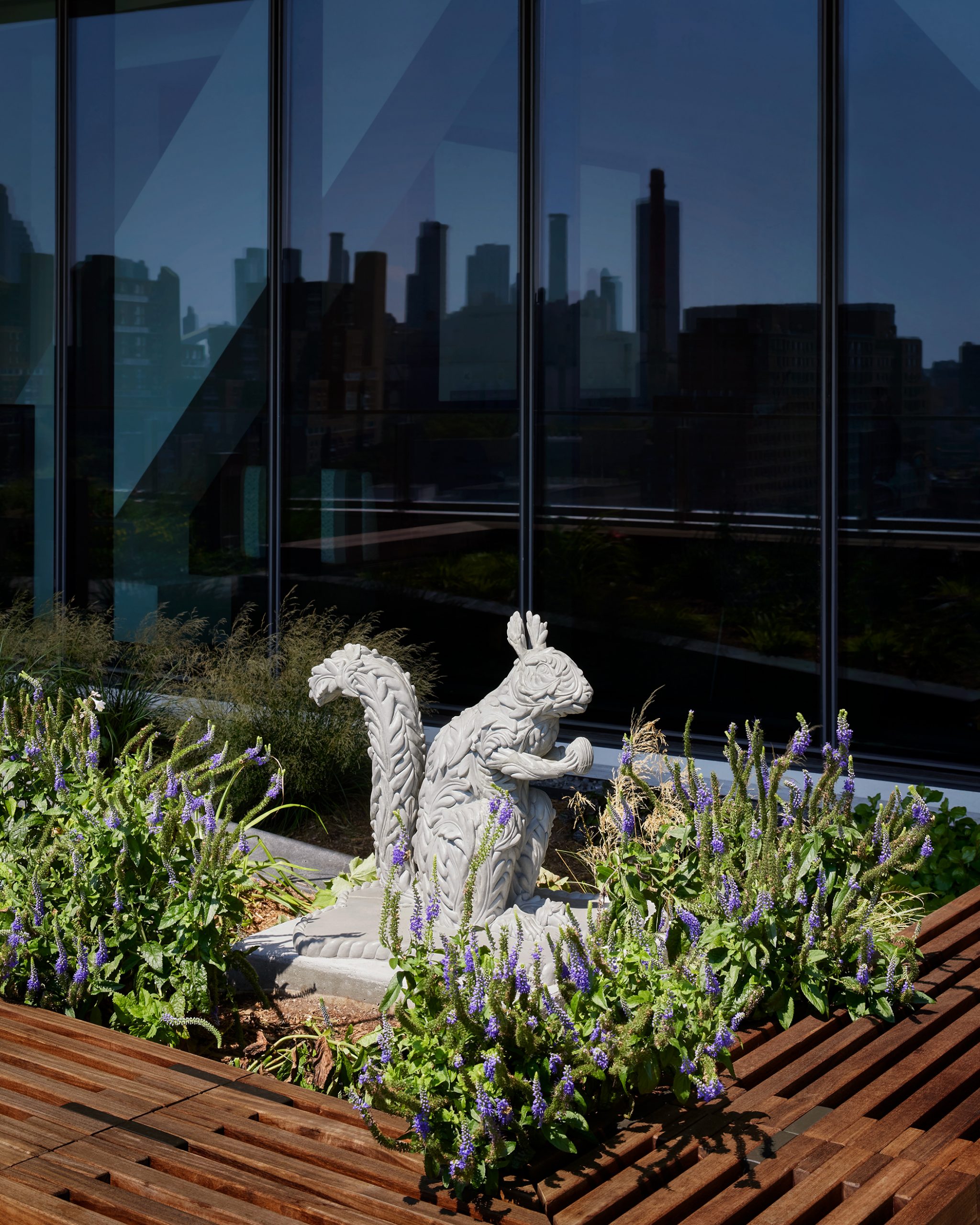 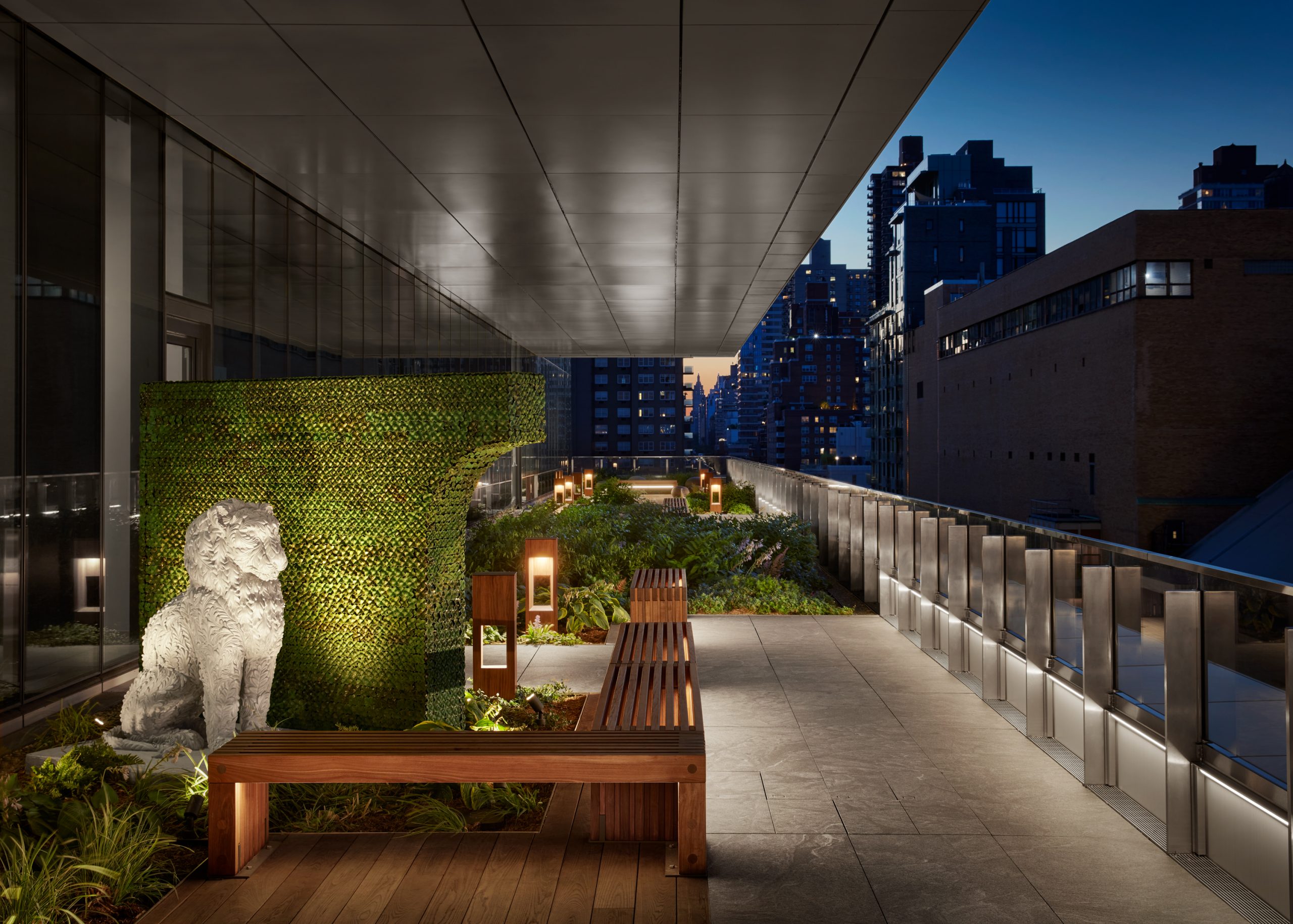 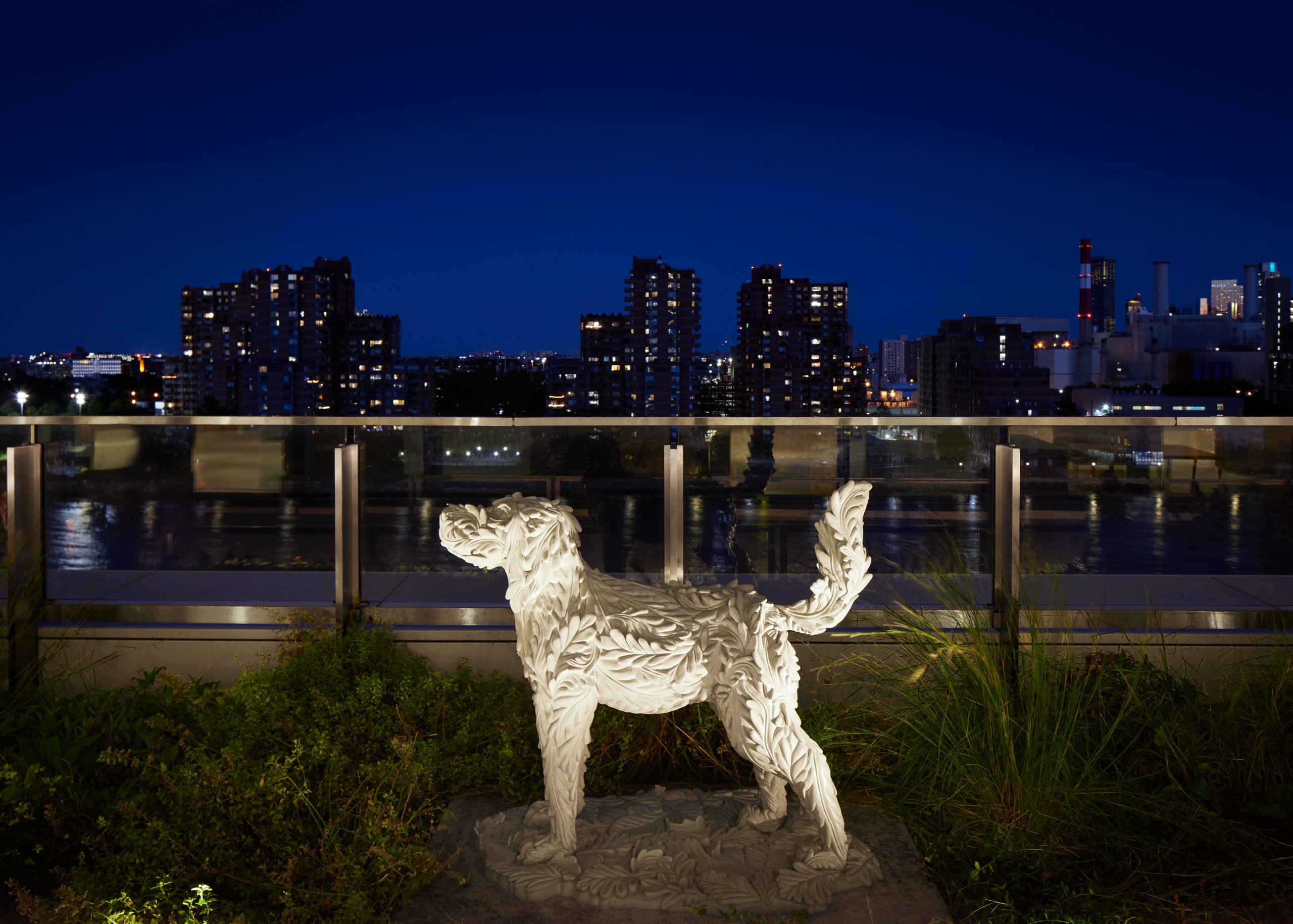 Overlooking the East River in New York City, this installation features five large scale sculptures by Colorado-based artist Kim Dickey. Included are two of Dickey’s signature terracotta-clad aluminum sculptures, "Half Arch" and "Inverted L Beam," and three concrete animals: a seated lion, "The Guardian (Patience)," a dog, "The Girlfriend (Fidelity)" and a squirrel, "The Collector (Memory)." The foliated sculptures blend animal and architecture in dialogue with the natural forms of the garden. The architectural forms of "Half Arch" and "Inverted L Beam" bookend the terrace, framing the views beyond. The sculptures, clad with thousands of green ceramic quatrefoils, reinterpret at a larger scale the Rococo decorative art tradition of bocage, objects encased by clustered, miniature flowers. The concrete foliated seated lion, dog and squirrel animate the stage of this garden space as part of the landscape independent from ornamental architectural traditions. For Dickey, these particular animals hold associations with attributes that help sustain us, such as courage, memory, loyalty and friendship.

In keeping with the new center's collection of over 1,250 art works themed around celebrating New York, Dickey drew upon architectural and art historical references throughout NYC - from Robert Morris plinth sculptures from the 1960s on view at the Whitney Museum to the iconic guardians of the New York Public Library, "Patience" and "Fortitude," and to the ornamental capitals and facades found on buildings across the boroughs - connecting this building’s site and its visitors to points beyond it. In making these works for MSK, Dickey hoped that they "offer a source of healing and hope in the way only art can."

This project involved a vast collaborative team to see it through from planning to production to install. Kim Dickey worked with multiple fabricators and her own studio team. MSK coordinated between Kim and the David H. Koch Center's consulting architects, landscape designers, engineers, lighting consultants, contractors and riggers to plan and install the works, culminating in a complex operation to get the sculptures transported from Colorado to New York and hoisted up the side of the building and placed via rigs on the terrace.

The David H. Koch Center for Cancer Care at Memorial Sloan Kettering is New York’s largest freestanding cancer center located on 74th Street and the East River. The building opened to the public in 2020 and offers outpatient cancer care across multiple specialties.