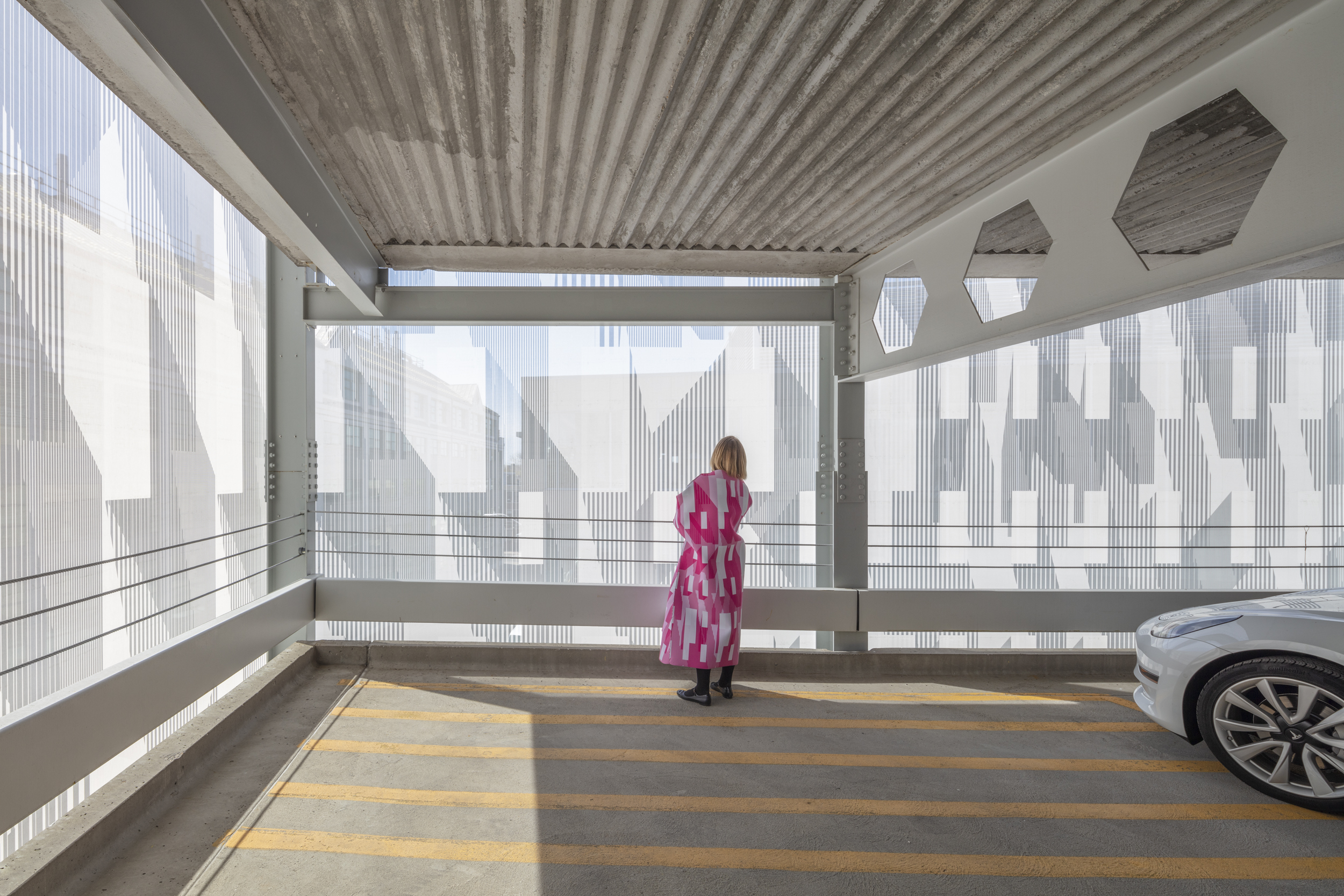 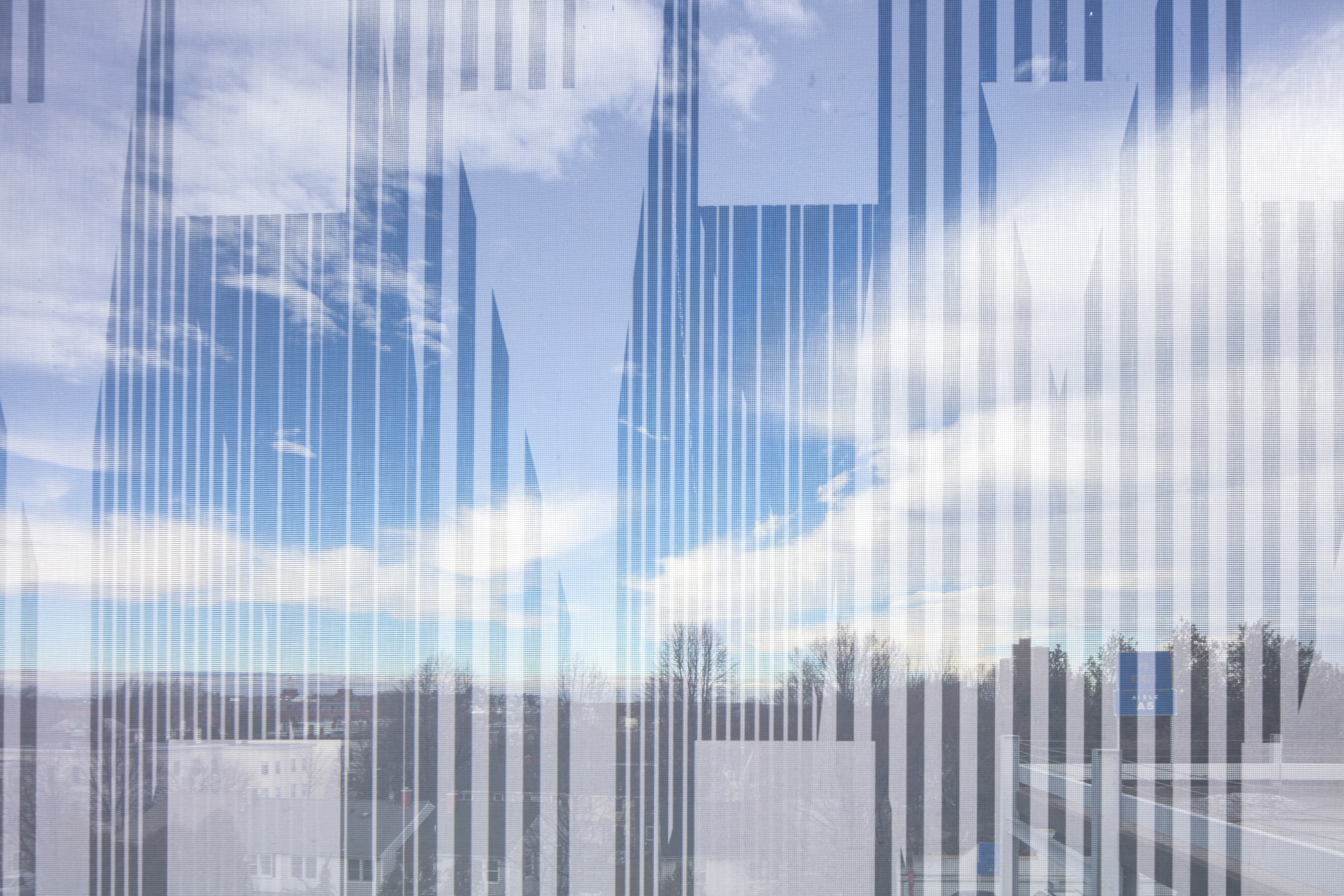 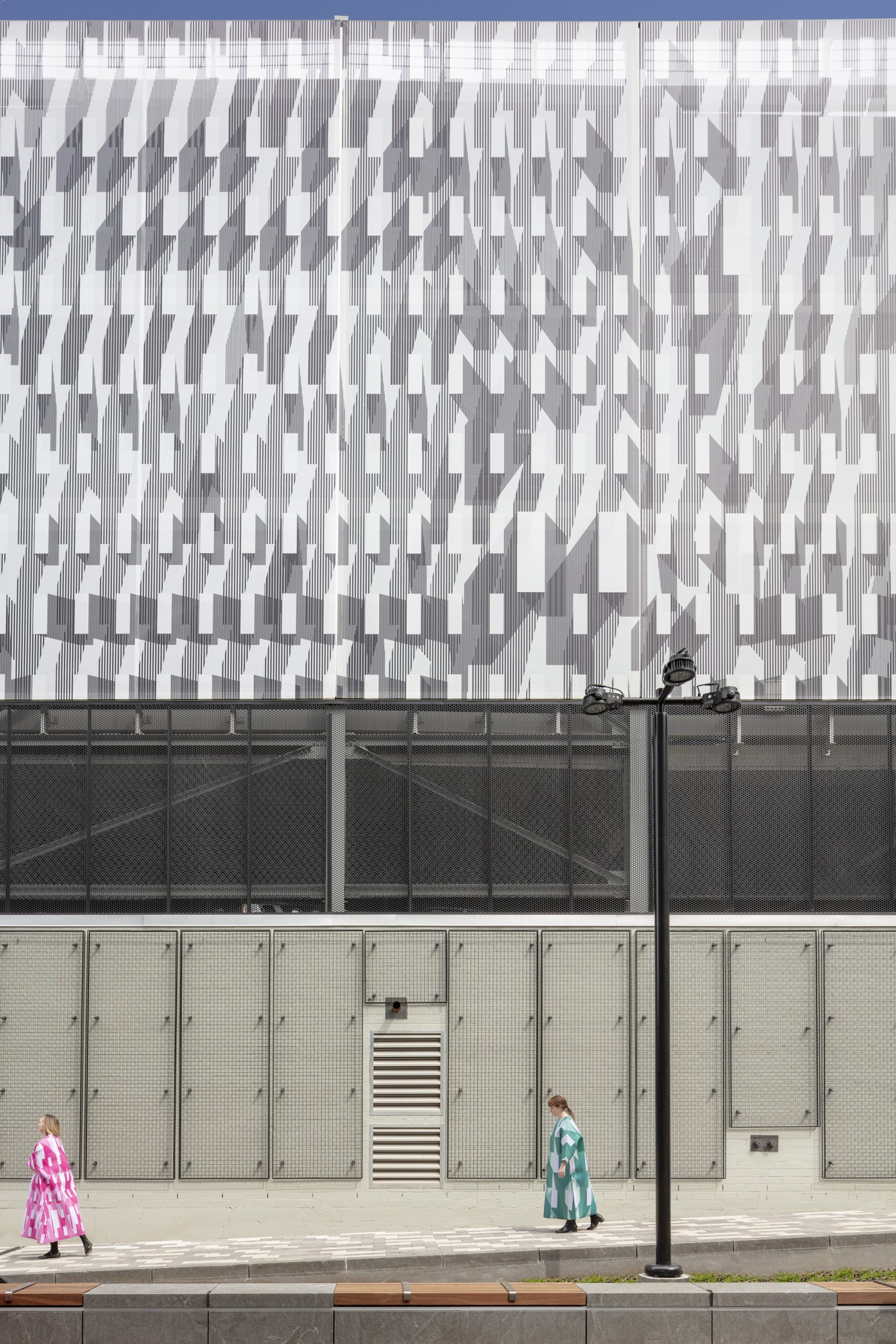 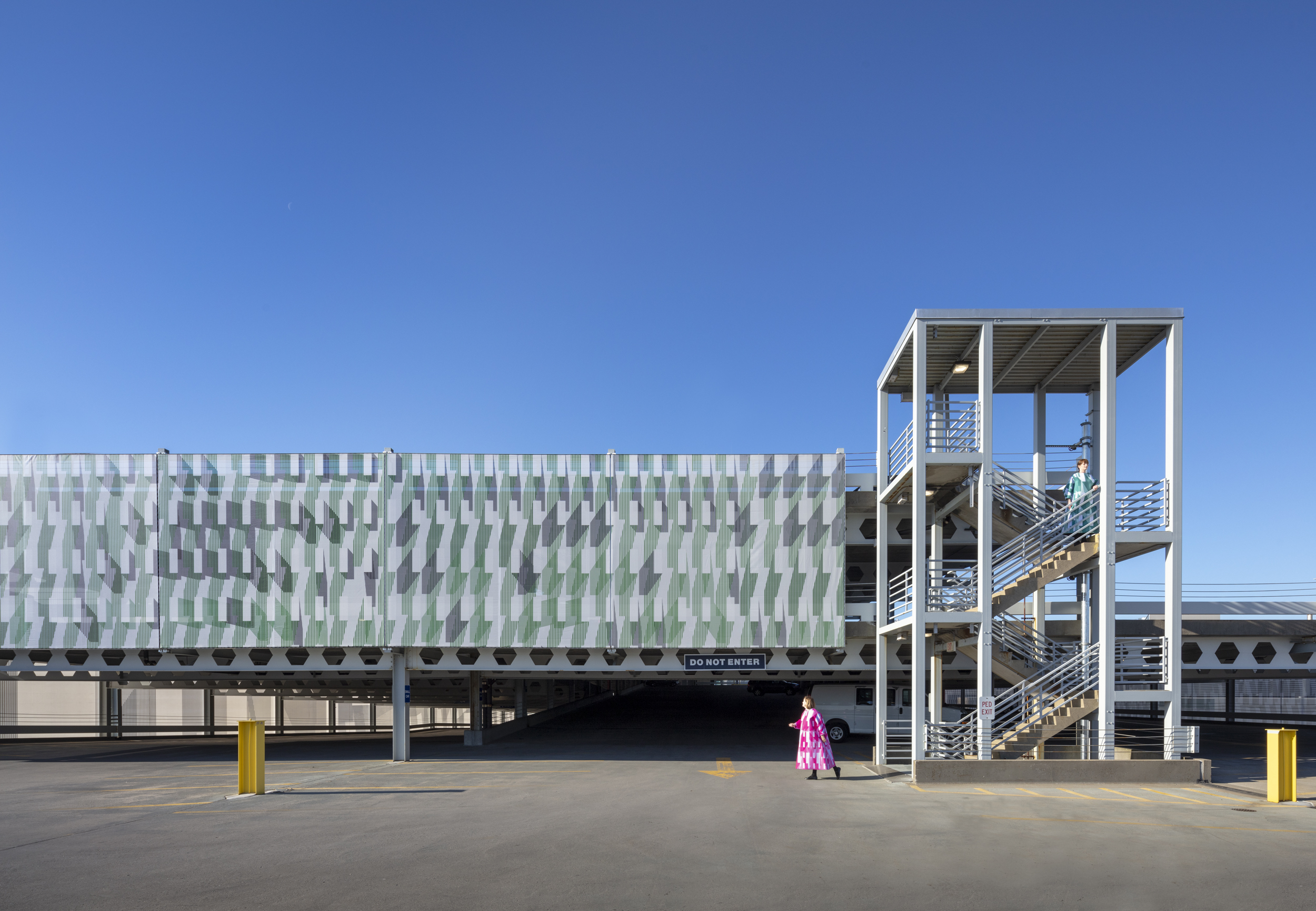 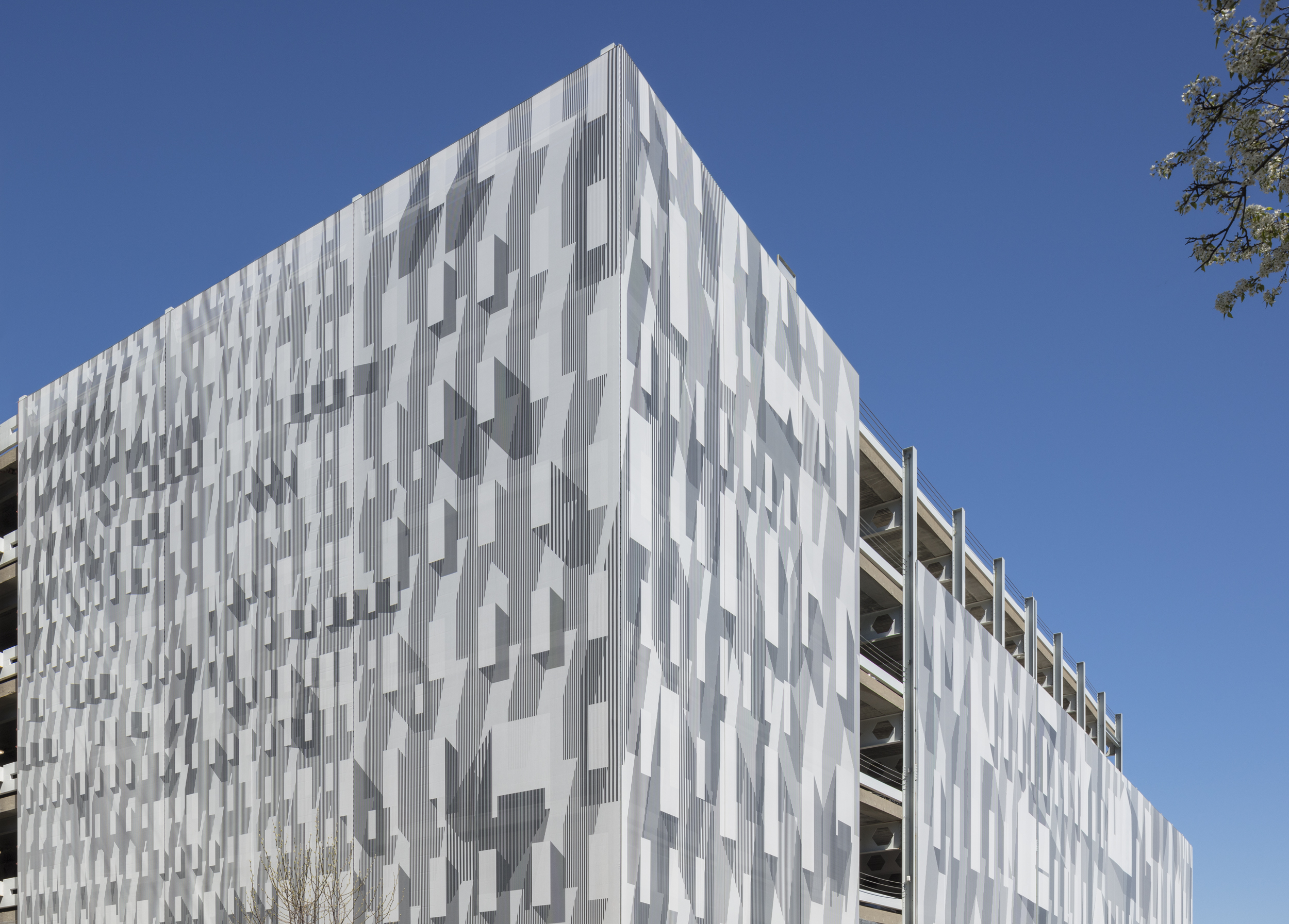 French 2D was commissioned to create a graphic façade to wrap an existing garage structure in Kendall Square. The pattern transforms and speak across scales, reflecting the location of the project in the rapidly growing technology hub of Kendall Square.

The large­scale graphic scrim, measuring 26,000 square feet, employs a tension-frame and mesh fabric façade system. Its pattern is a play on architectural detail and shadow effects that are meant to swirl, drift, and articulate into 'characters' along the garage's long side, blurring and expanding the boundaries of two­-dimensional and three-dimensional perception.

The existing garage is part of a complex that was being redeveloped on a high profile mixed use site. The City of Cambridge and its residents asked that the developer address the existing large garage and create an opportunity for public art. The development of this artwork was a crucial condition for the new building projects to move forward. In order to consolidate the reading of the structure as a single icon for its changing context in the Cambridge neighborhood, French 2D sought to present a proto-­building that could be read through the multi­scale articulation of its façade, as both applied decoration and object. The resulting permanent screens play at different scales and compliment the larger sweeping views and the tighter urban plaza created by the new development.

French 2D was initially commissioned to create the screen art by the project architect. French 2D then brought in Design Communications Ltd. to engineer and install the system by Facid North America. Early in the process, French 2D met with community members with direct views of the garage from their houses. The artwork addressed their concerns as well as the desires of the larger community. Multiple presentations were made to the Cambridge Planning Board for approvals and French 2D worked with the architect and contractor to review installation work.

For the photography of the completed work, the French sisters acted as their own drawing scale figures in custom dresses of the same pattern as the garage. In the architectural photography, the artisits became loosely translated scale figures, wandering the site as freed pieces of the drawing.