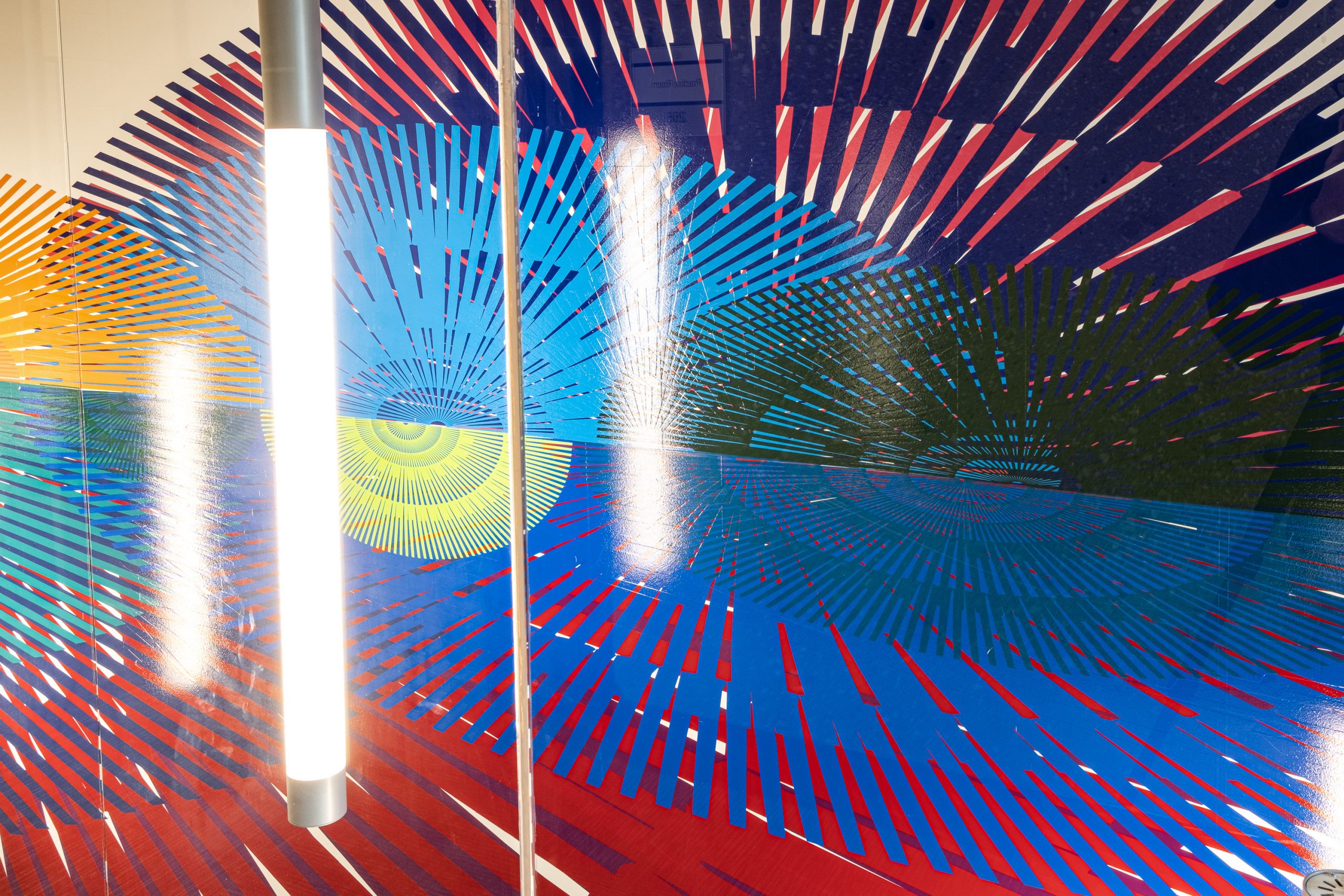 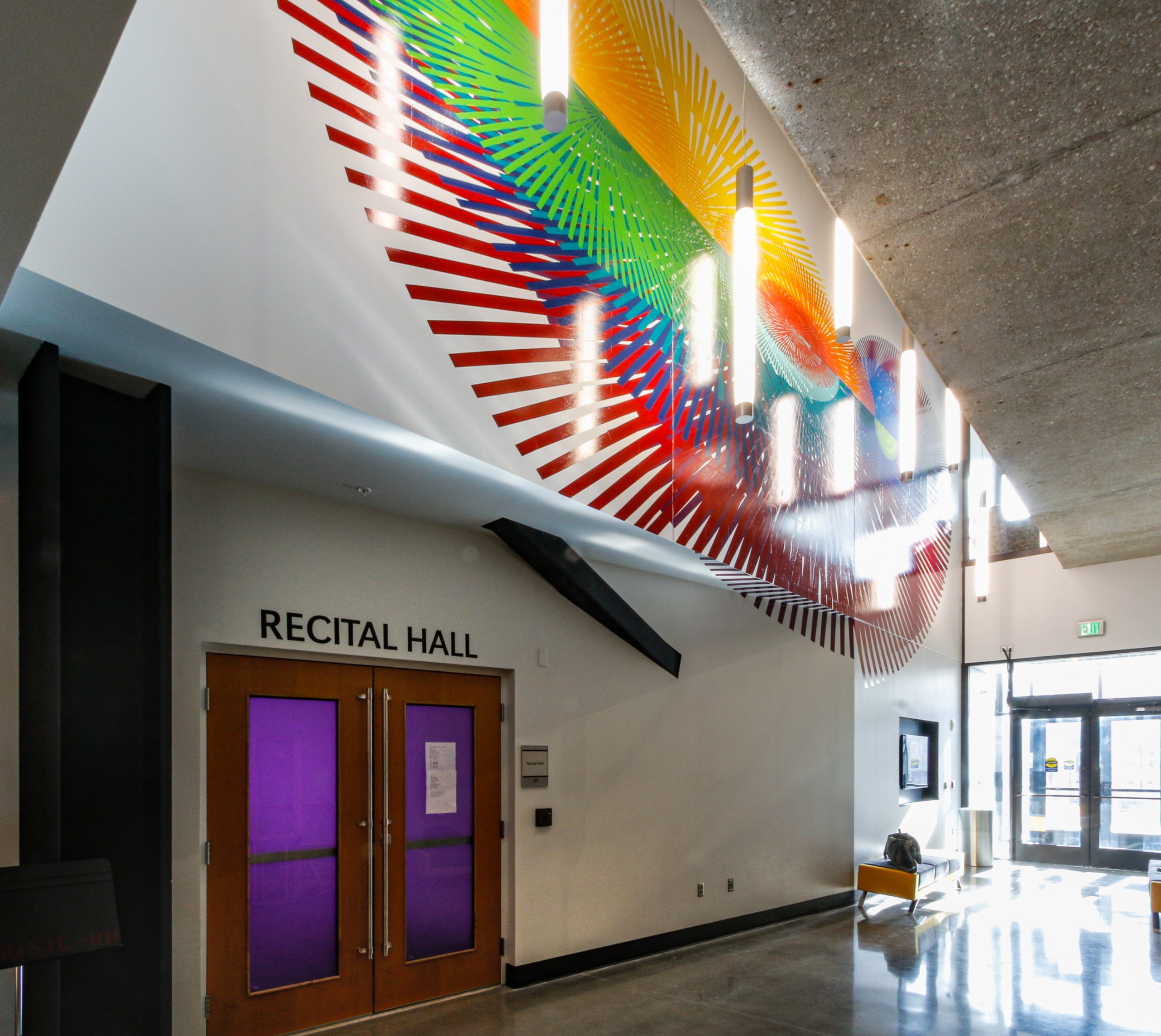 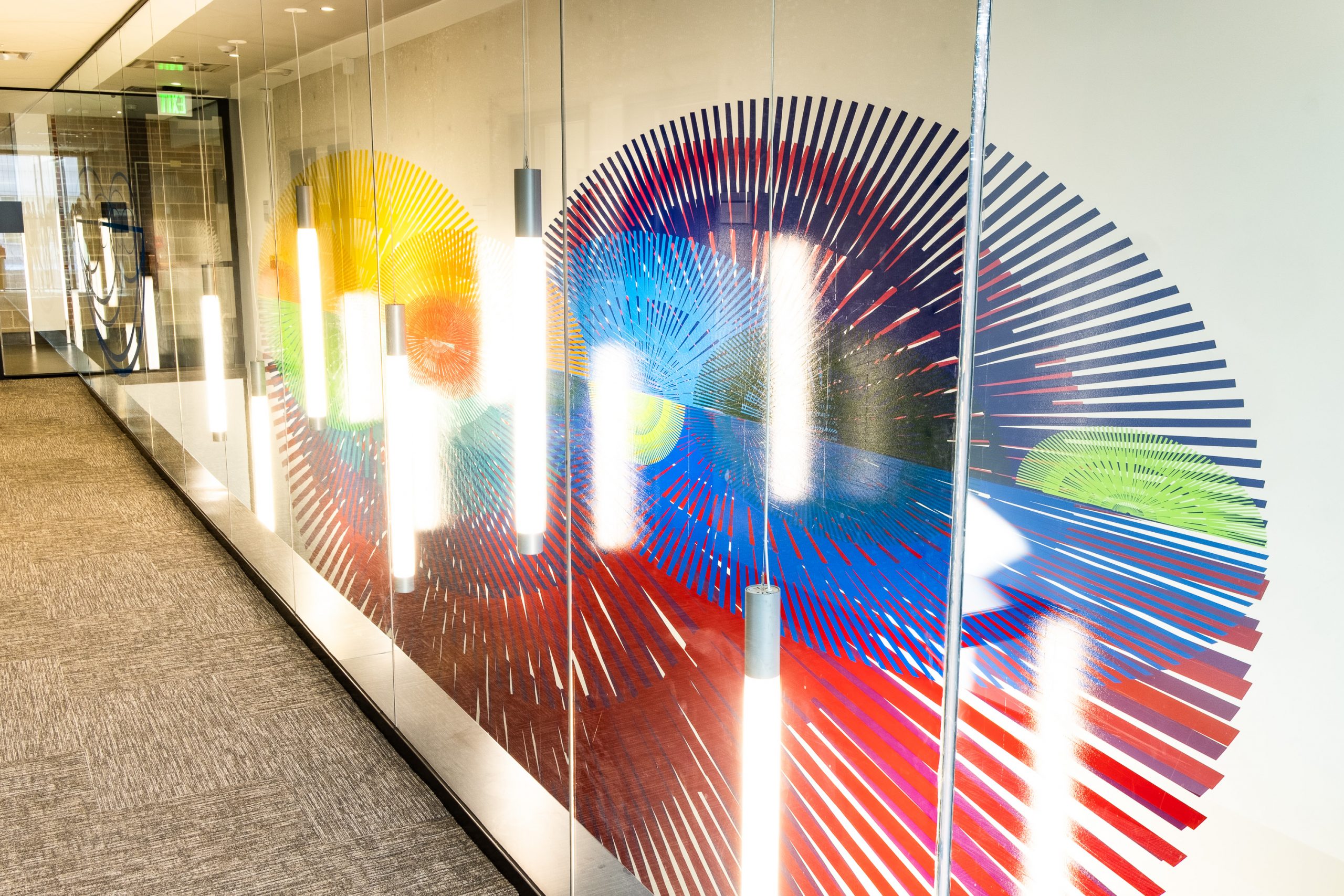 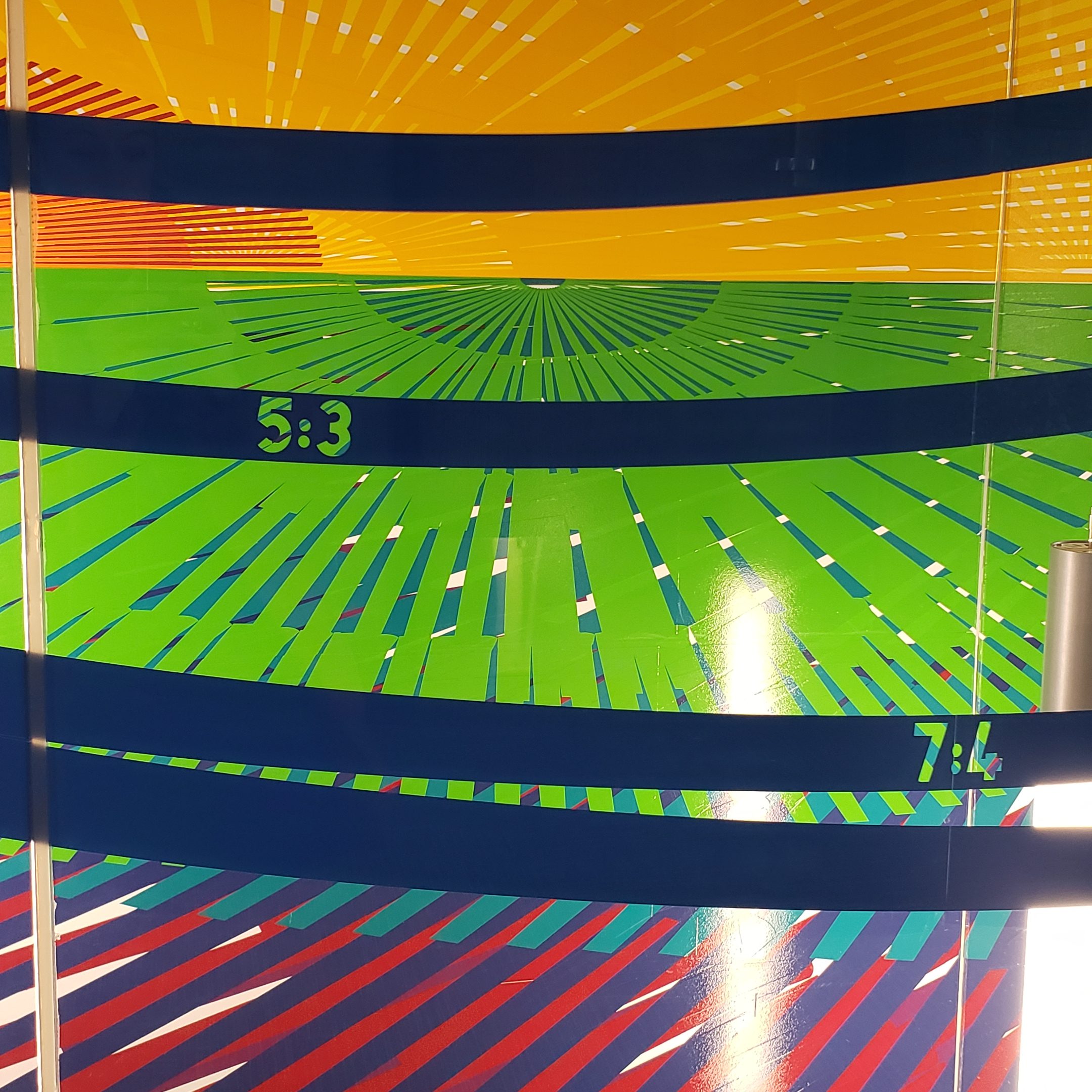 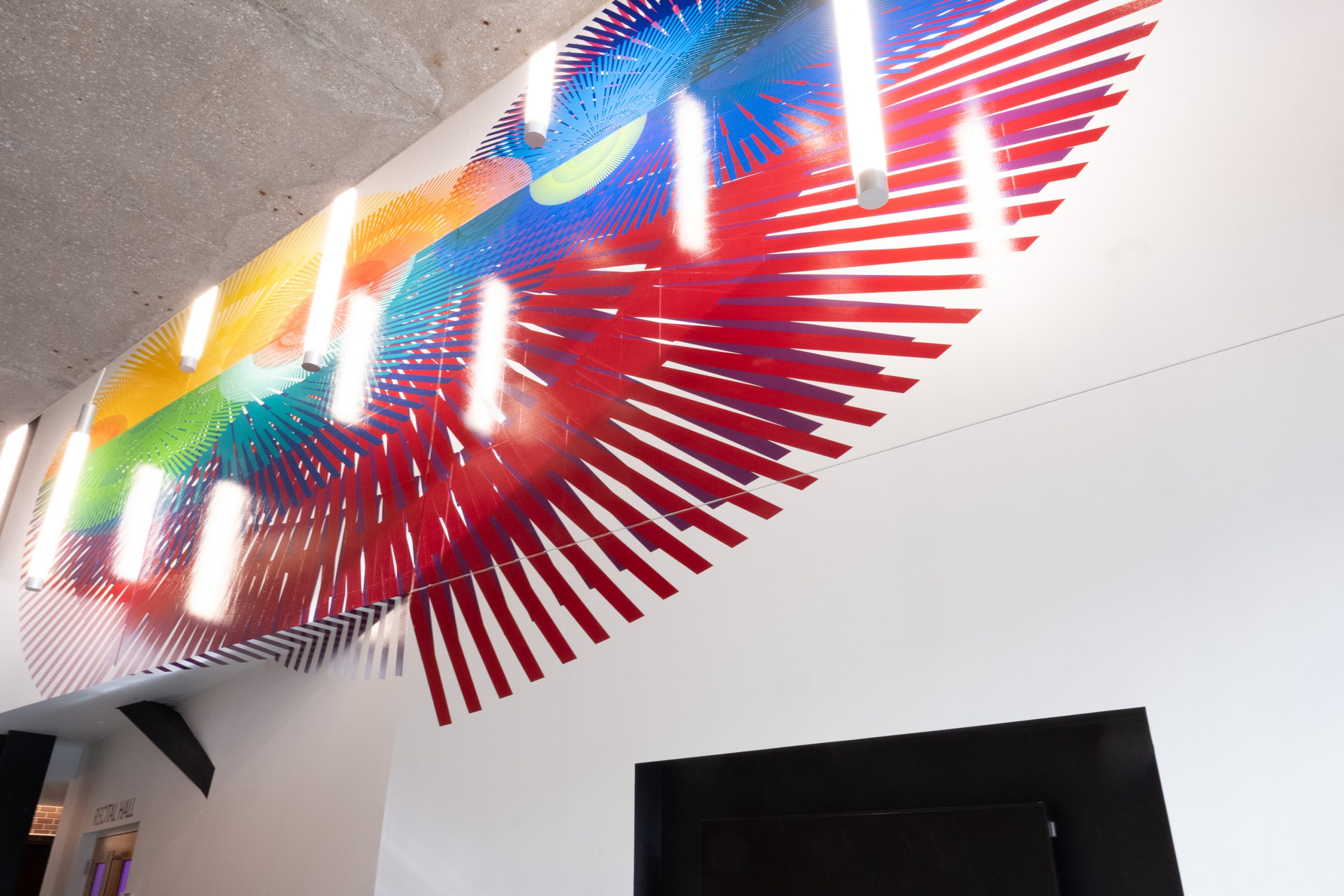 Strauss Performing Arts Center, University of Nebraska Omaha. The location for art was above the Recital Hall in a narrow chasm that also faces the music school’s practice rooms upstairs behind glazing.This piece breaks down an octave into intervals in a colorful fashion. The rhythm of the colored patterns lends motion and different interpretations to the piece while allowing the background colors to migrate through the piece, as companion tones in music do. An interval is simply described as “the difference in pitch between two musical sounds” but originates from the Latin “intervallum” which means the space between ramparts.

I expanded the call to include the 'legend' drawing on the glass upstairs which calls out the parts of the octave referenced by their ratio. The jurors helped further refine this concept by omitting words I included ("Minor Third" "Perfect Fifth") in favor of a more subtle designation understandable by academic musicians. Casual visitors may feel the musical influence in the way the colors blend and the rhythm of the line work. For the budding and professional musicans, there is more music theory to sink their teeth into. The work aids in energetically announcing the entrance to the Recital Hall.

This was a nation wide public art call. I was shortlisted alongside four other artists and after presenting to the panel of professors and consultants from the State, won this commission (as well as Anticipare for the Concert Hall). The jurors helped refine my concept of included a legend-like piece on the glazing facing the piece upstairs. Installation schedules were coordinated with the facilities manager and professors as this is an active site and the scissor lift negotiating the chasm, lights and migrating sounds (important in a music school) were all part of the consideration. Each coordination communication included at least 3 representatives of different interests.

Because of the restrictions of the 1% for Art, this piece remained largely unchanged from the original proposal but the stakeholders were all pleased with my research, openness to feedback and responsiveness to the unique site conditions.