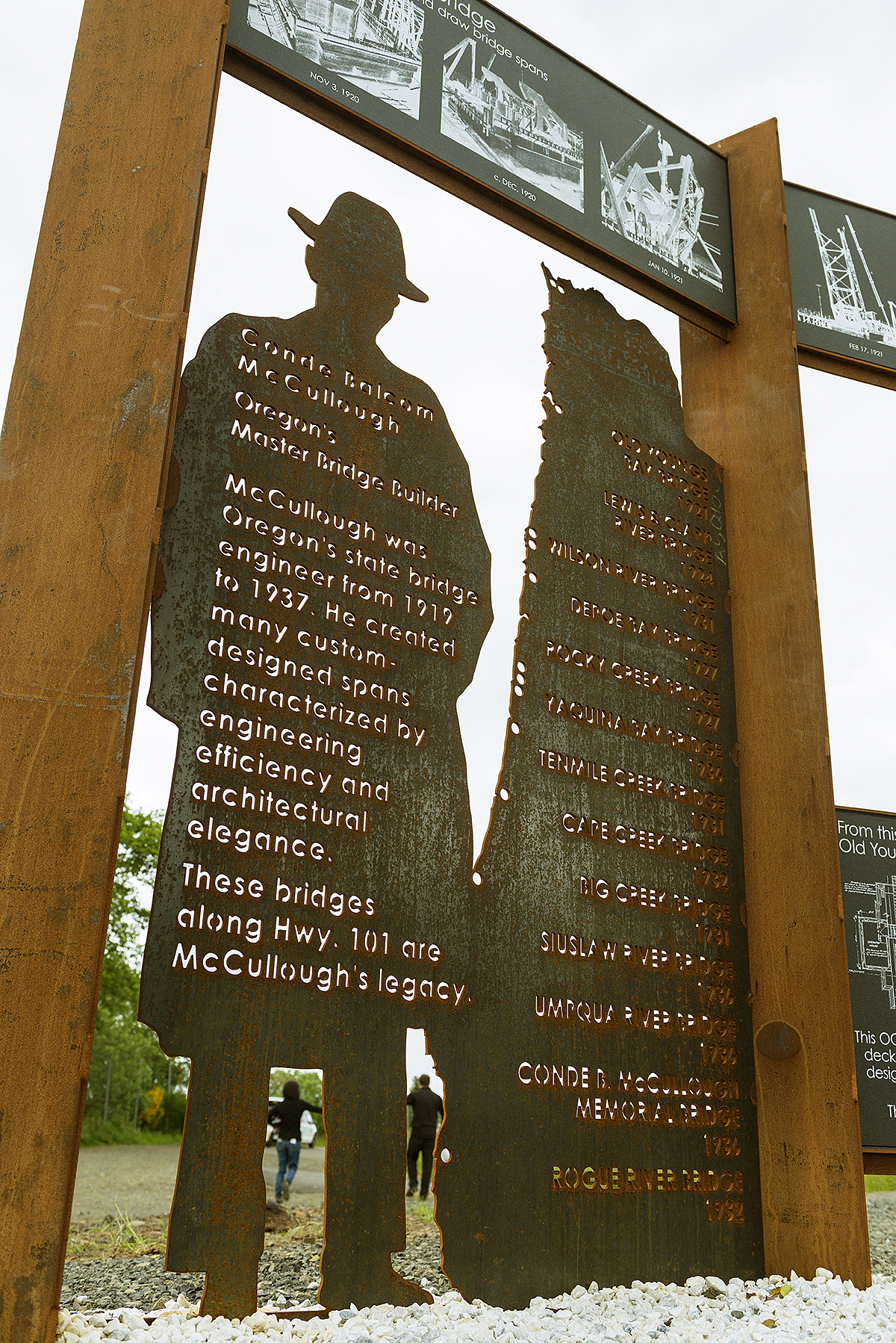 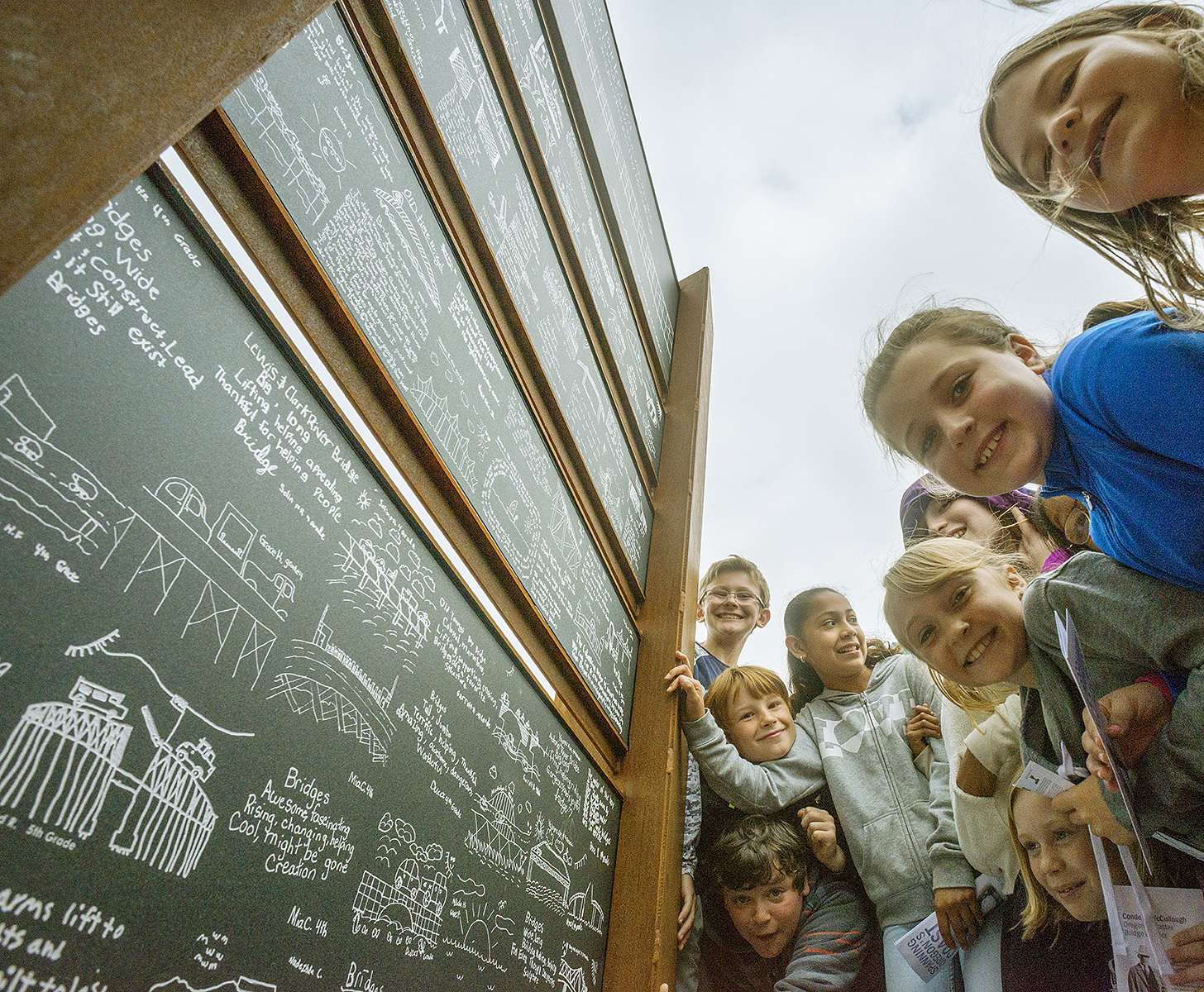 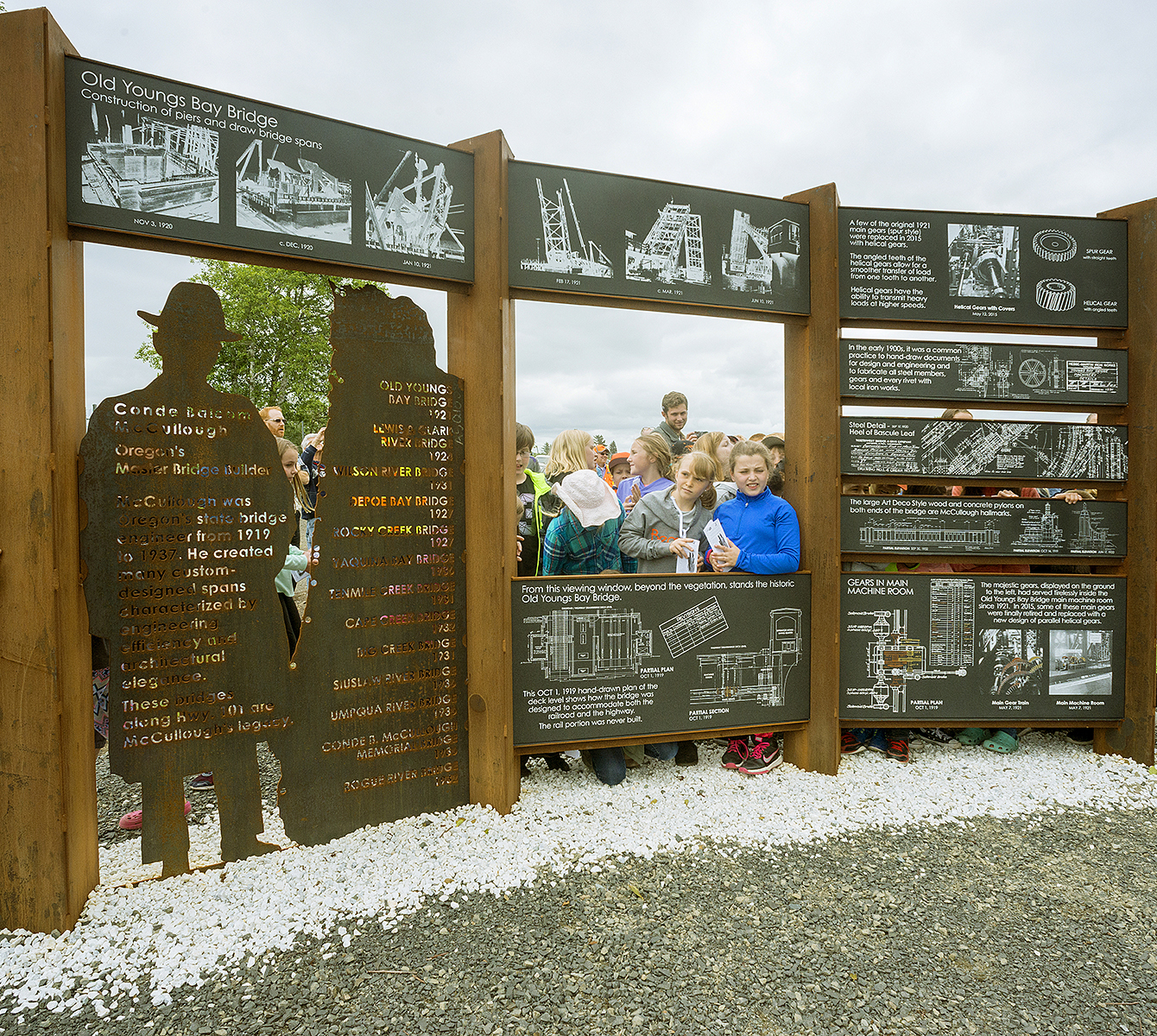 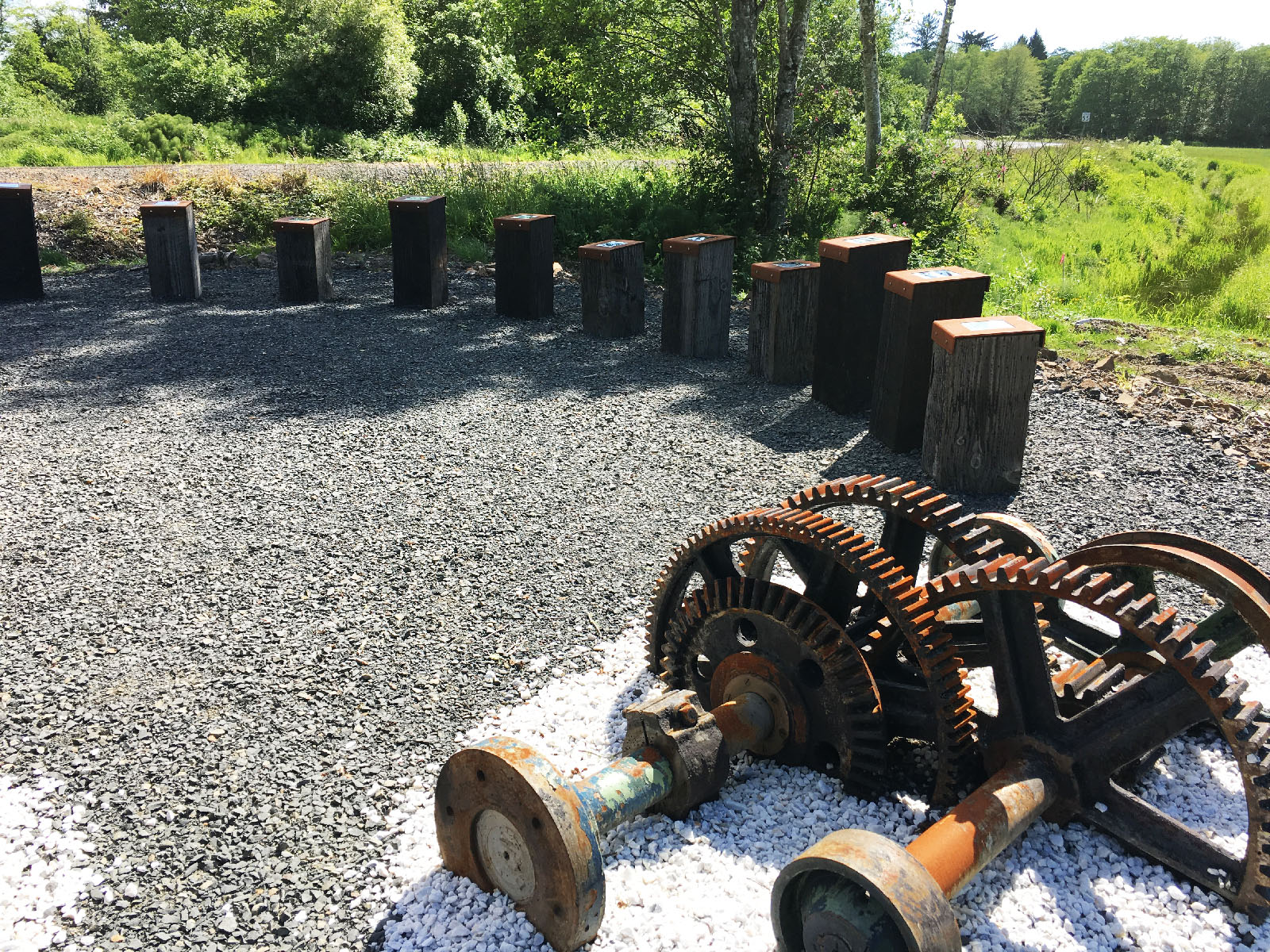 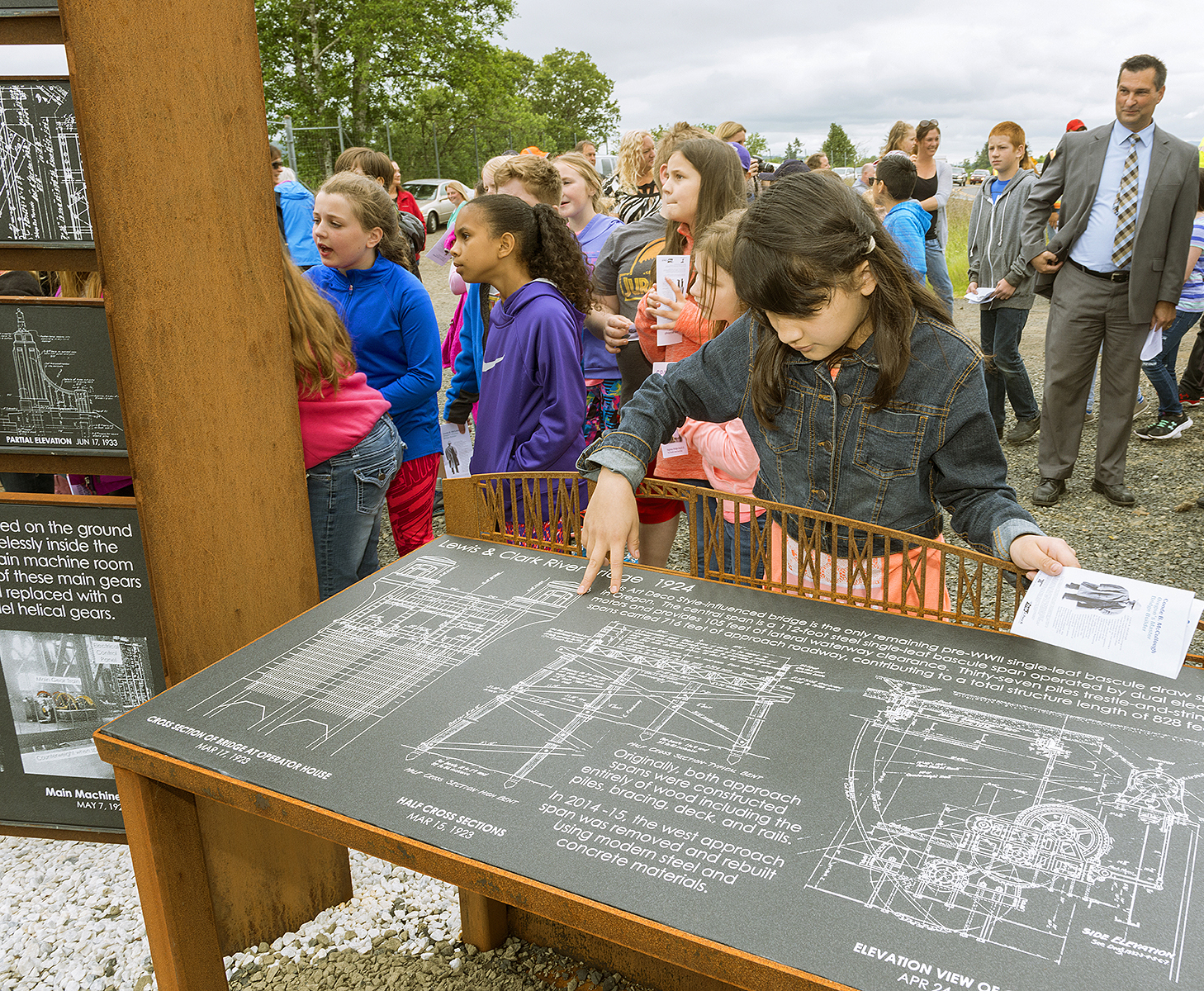 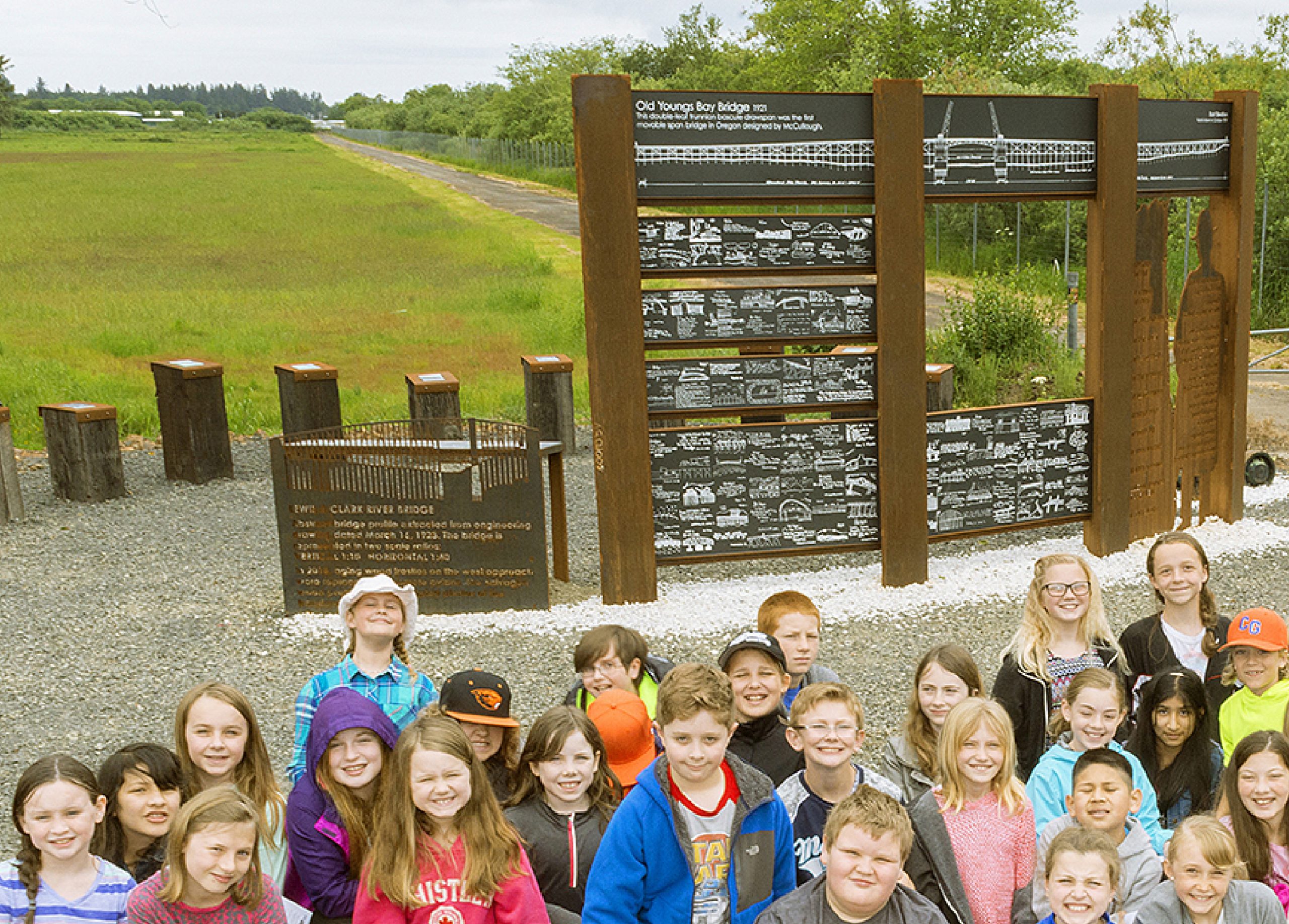 The new display came about because the rebuilding of these two historic bridges (both were built in the early 1920s) was considered an “adverse effect to the historic resource” under federal regulations. Therefore, this interpretive display is part of the ODOT (Oregon Dept. of Transportation) mitigation effort in telling the stories about these two unique bridges. This interpretive display not only honors bridge designer/engineer Conde B. McCullough and his engineering feat in designing and building 13 bridges along the Oregon coast line, this display connects the young generation with history through art.

The design pays homage to the notable State Bridge Engineer Conde B. McCullough and his first two bascule bridges - the Old Youngs Bay Bridge (1921) and the Lewis & Clark River Bridge (1924). From the interpretive display, one can see both bridges in the distance; hence the display serves as a viewing platform by the side of the Old Hwy 101. There is a silhouette of the master bridge designer; as well, the locations of his thirteen bridges along the Oregon Coast, both made from ¼ inch weathered steel plates. In response to the project goals, the design of this display incorporated salvaged original gears of the Old Youngs Bay bascule bridge from the machine room; original wood trestles removed from the historic Lewis & Clark River Bridge were re-purposed to serve as display pedestals supporting weathered steel brackets framing archival historic photos taken during the 1920s construction of the two bridges. Sandblasted onto the black granite panels are the images taken from the original hand-drawn engineering drawings as well as images of historic photos, all displayed along with inspirational bridge sketches and poems by the local elementary school students.

The multi-trade team worked with ODOT in researching available archive images and ways to incorporate the salvaged gears, old-growth wood trestles, deteriorating historic engineering drawings and faded photographs into the design…not to mention the need to accurately capture young children’s light and detailed line work. The designer work closely with the artisan fabricators in pushing the technical limits of sandblasting fine lines on stone panels.
The design team conducted an outreach with the local Lewis & Clark Elementary School through a poetry and drawing contest. The submittals from the 3rd to 5th graders were especially a hit! ODOT read each and every one of the poems and sketches of what the bridges meant to the young artists. The submittals were so heartwarming to ODOT and the design team that, instead of selecting the top three entries, ODOT enthusiastically requested the design team to find a creative way to incorporate all the poems/sketches into the display. The project also engaged a team from the Astoria High School metal shop in making a steel time-capsule in the shape of a tree log to contain the poetry/sketch submittals from the young artists.

The design effectively tells the story of the historic feats in design and construction from decades ago, making it immediately available to the community through a tactile and personal engagement. The grand opening event was special when old and young gazed upon McCollough’s hand drawn engineering masterpieces, alongside the bridges drawn by the young artists. This design-led design-build project was delivered to ODOT ahead of schedule and on budget for 60 square feet area of permanent interpretive display and “viewing platform” by Old Highway 101 at the west approach of the Lewis & Clark River Bridge.