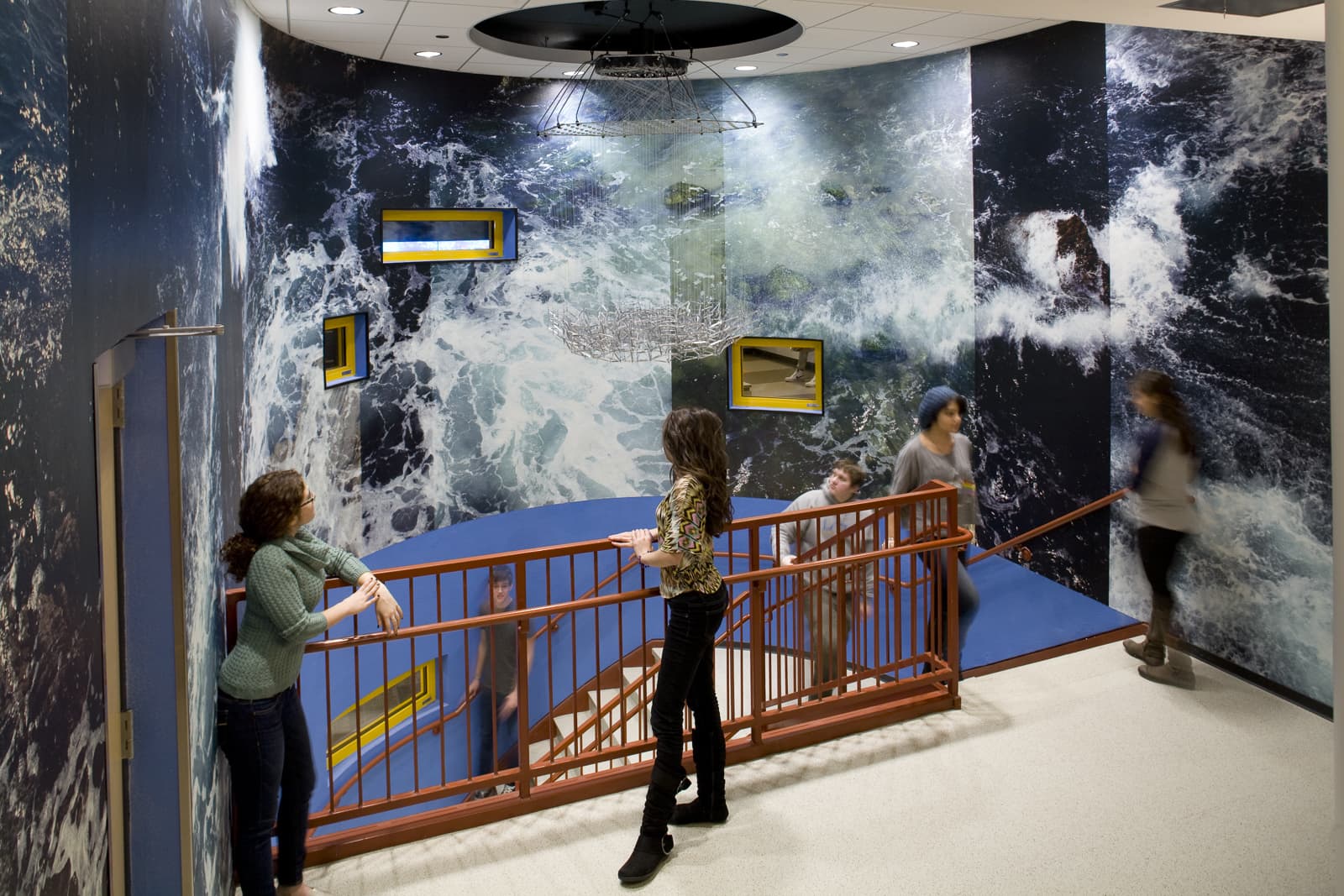 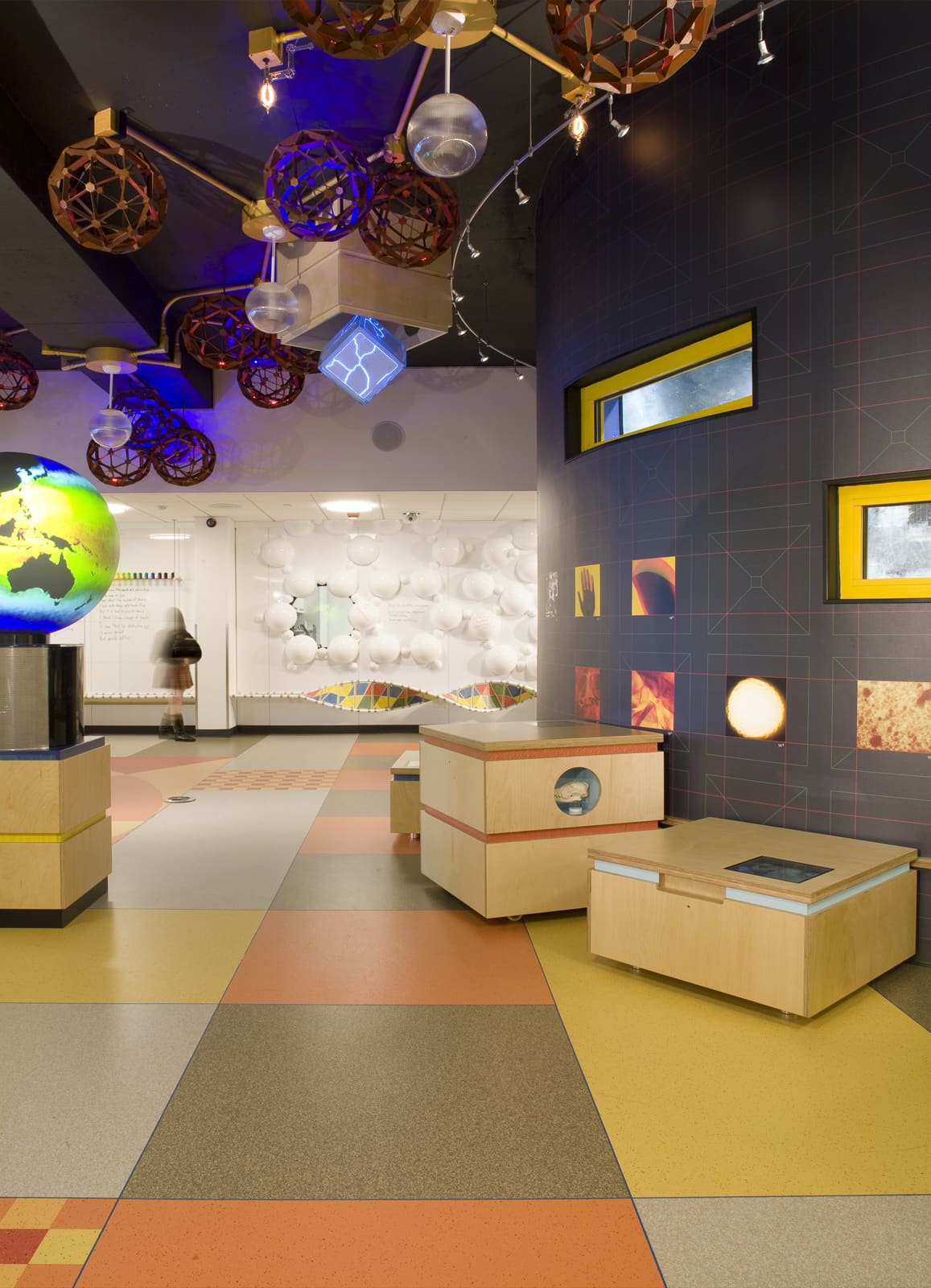 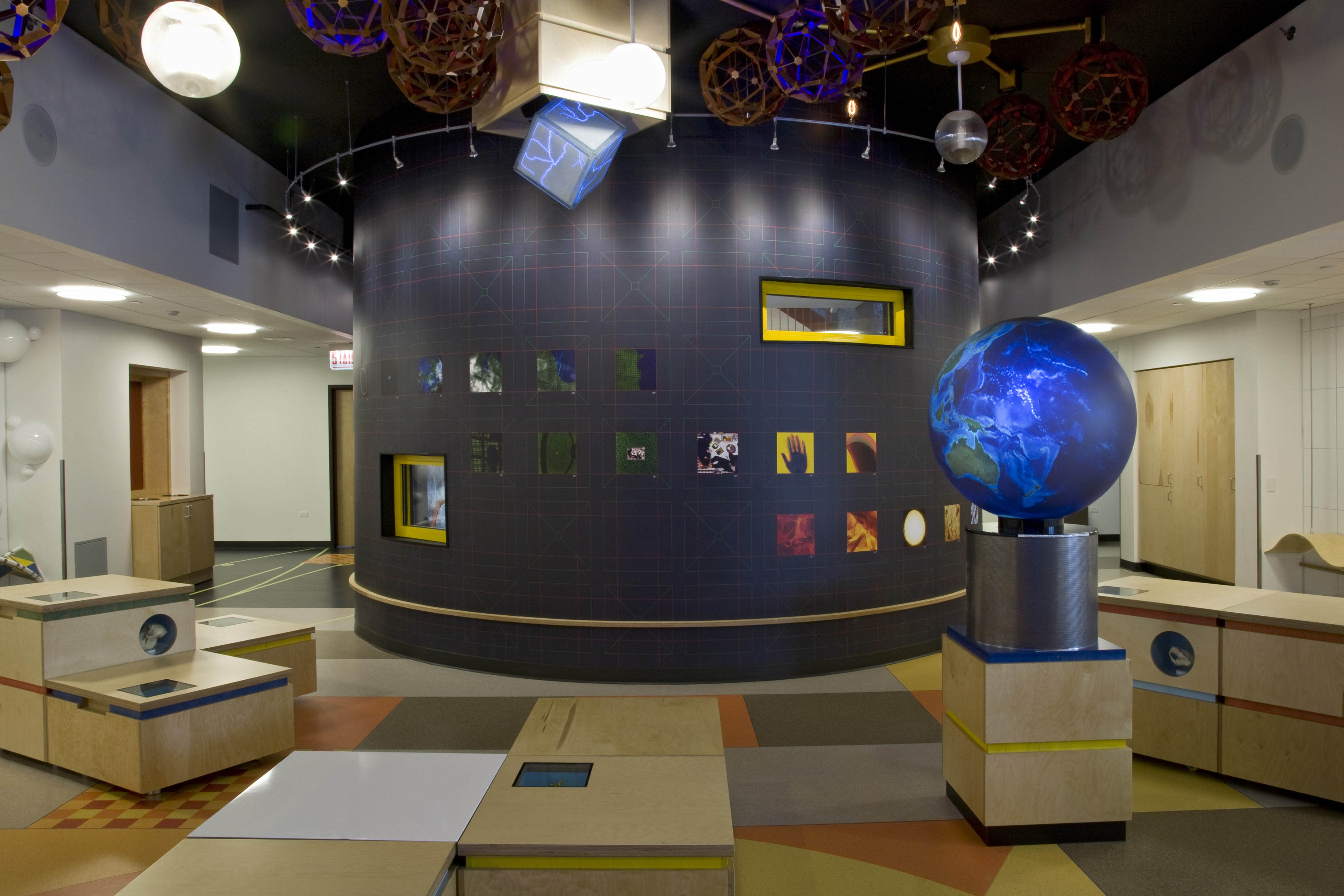 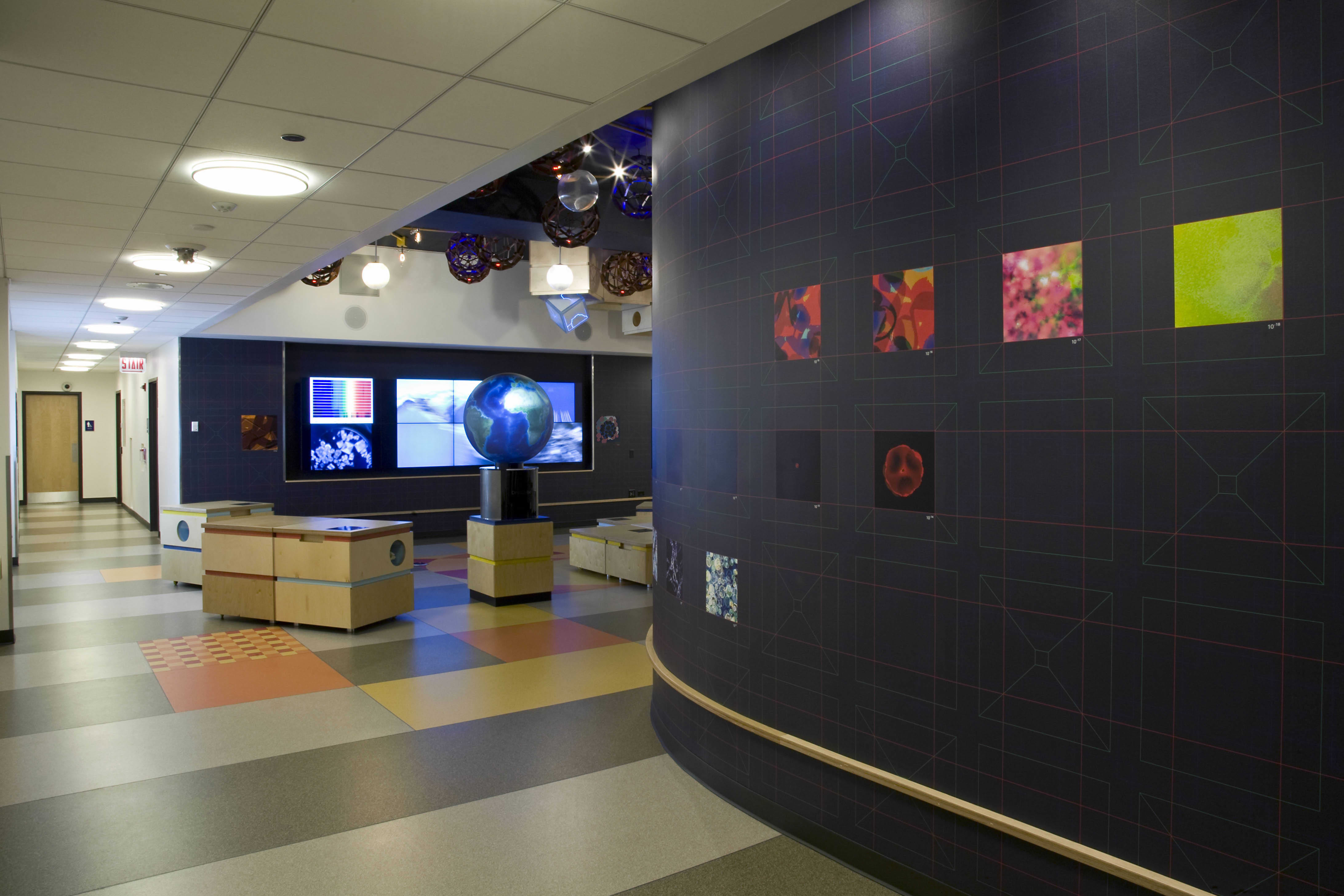 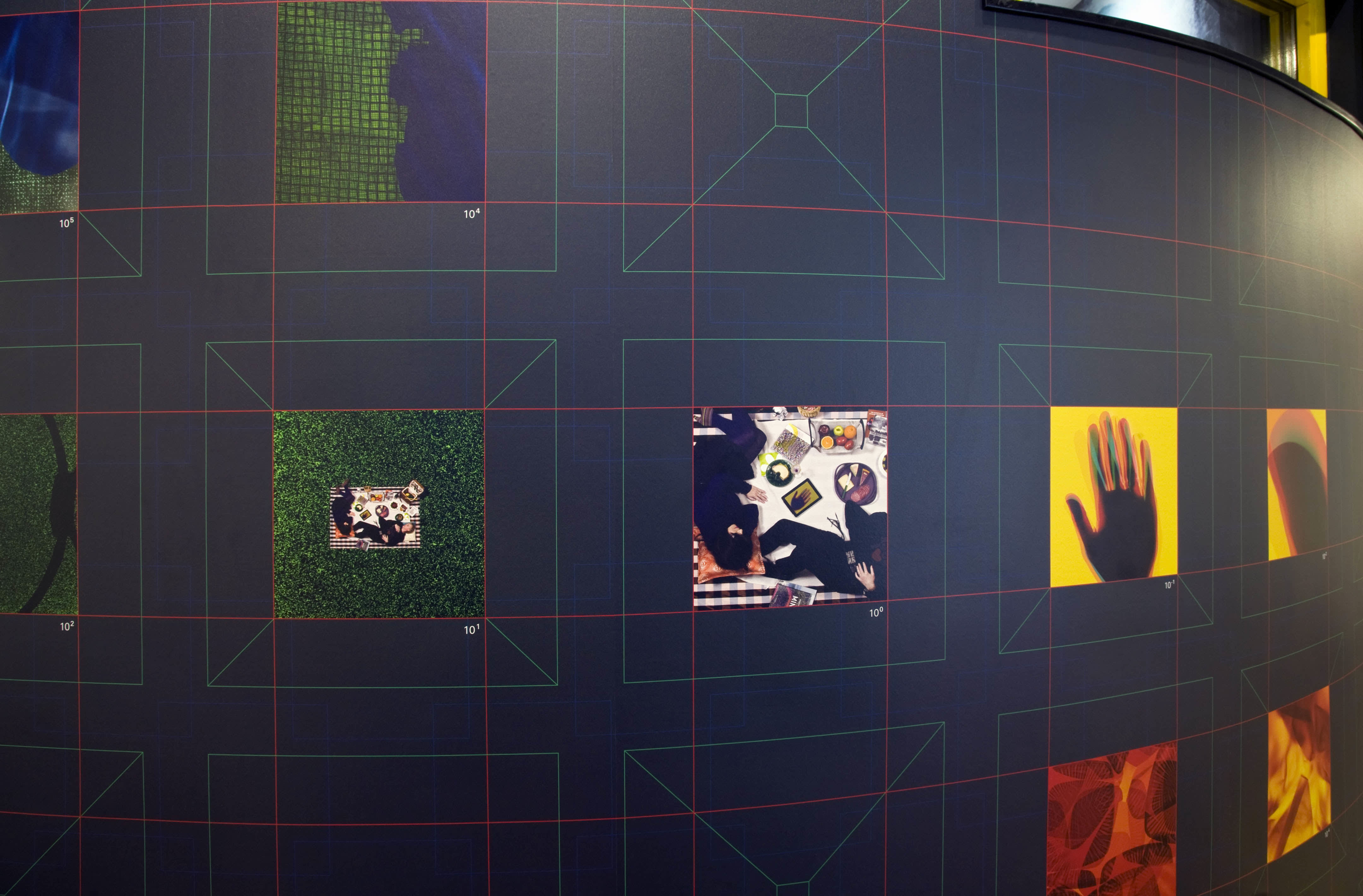 Fusing together creative processes of science, technology, and art, the 2200 SF Latin School of Chicago's Interactive Science Forum provides students hands-on access to scientific concepts and new technologies, with perspectives into the beauty, art, and complexity of our natural world.

During an envisioning session including esteemed alumni and parents, we often heard that art technology should be explored together within the forum. We designed the forum in multiple dimensions, to engage science students and those not pre-inclined to the sciences and technology through “artscience”. It was critical that this public space appeal to the young artist, the mathematician, the scientist, and the computer “geek” and that it be beautiful. Commissioning artworks based firmly in “real science’ was a pivotal way to meet these goals, while defining and nurturing a more responsive environment; one in which students, teachers, and visitors would be enthralled by imagery and hands-on experience. Integrating artwork into a “stem-based” public space helped generate learning “steam”. The Interactive Science Forum is truly a catalyst for creative alchemy, technology, and “artscience”.

As architects and curators, we identified two artscience artists for the Latin School commission. The two artists worked closely with the design team, Latin School staff and students to create works that promote learning while forging unique connections to art and science. We wanted a series of graphic murals to act as viewports, bringing concepts of quantity, scale, space, and perspective within student grasp. Inspired by the Eames Powers of Ten film, we collaborated with photographer Doug Fogelson on a mural that would present a similar range of scientific and celestial imagery; one which would take viewers on an adventure of magnitude, zooming out from bird’s eye view on Earth to space’s outer reaches through exponential jumps of powers of 10. Representations of “waves” surround students on the curved stair, articulating the experience of movement, time, and space. Reuben Margolin’s kinetic "Nimbus Wave" activates the stairwell and generates excitement. Reminiscent of the movement of water, the sculpture ripples and fluctuates from its center, adding drama and engineering prowess. Complementing Margolin’s artwork, Fogelson’s second mural "Ventura" lines the stairwell, immersing students in the visual and emotional impact of ocean waves as a force of nature.