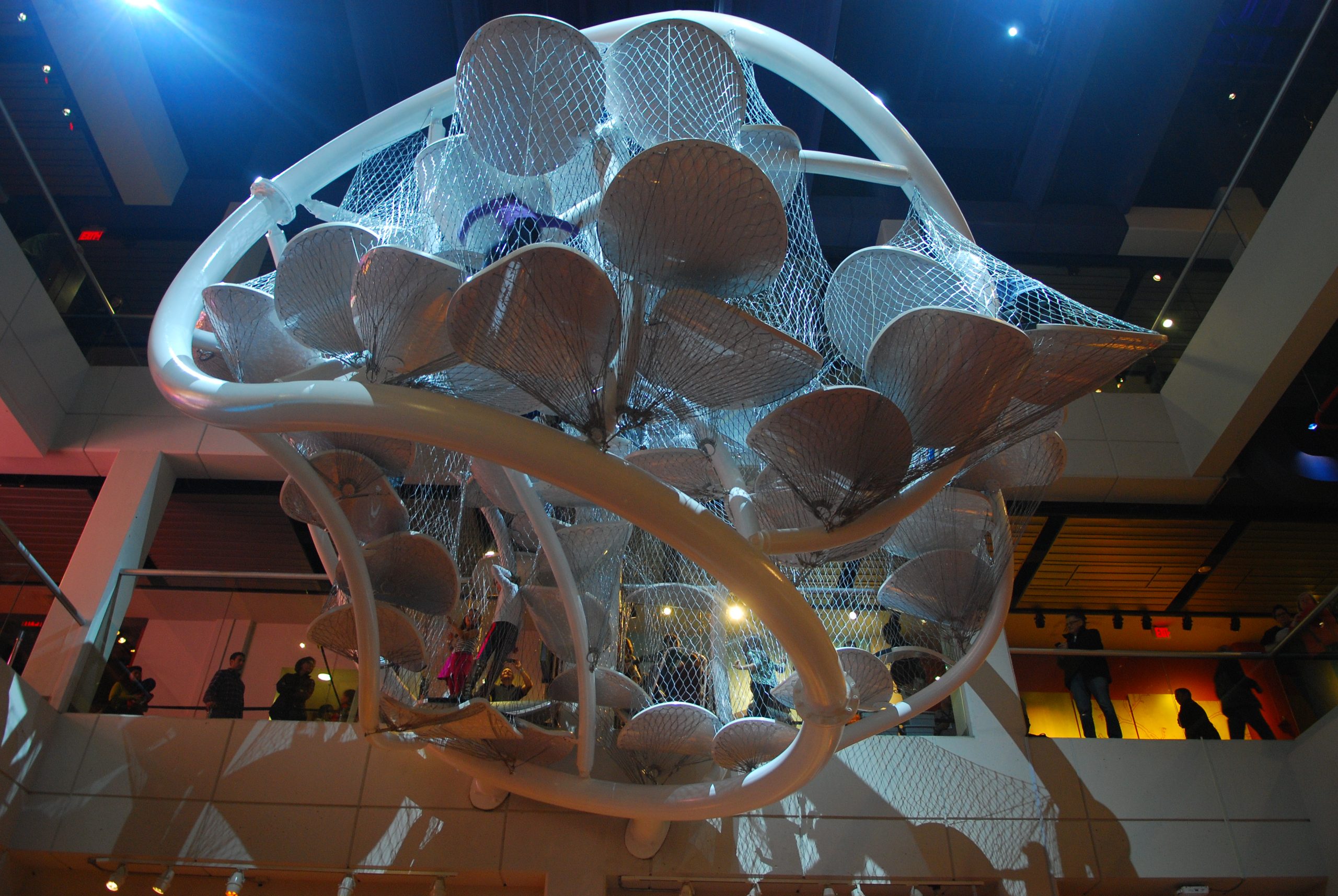 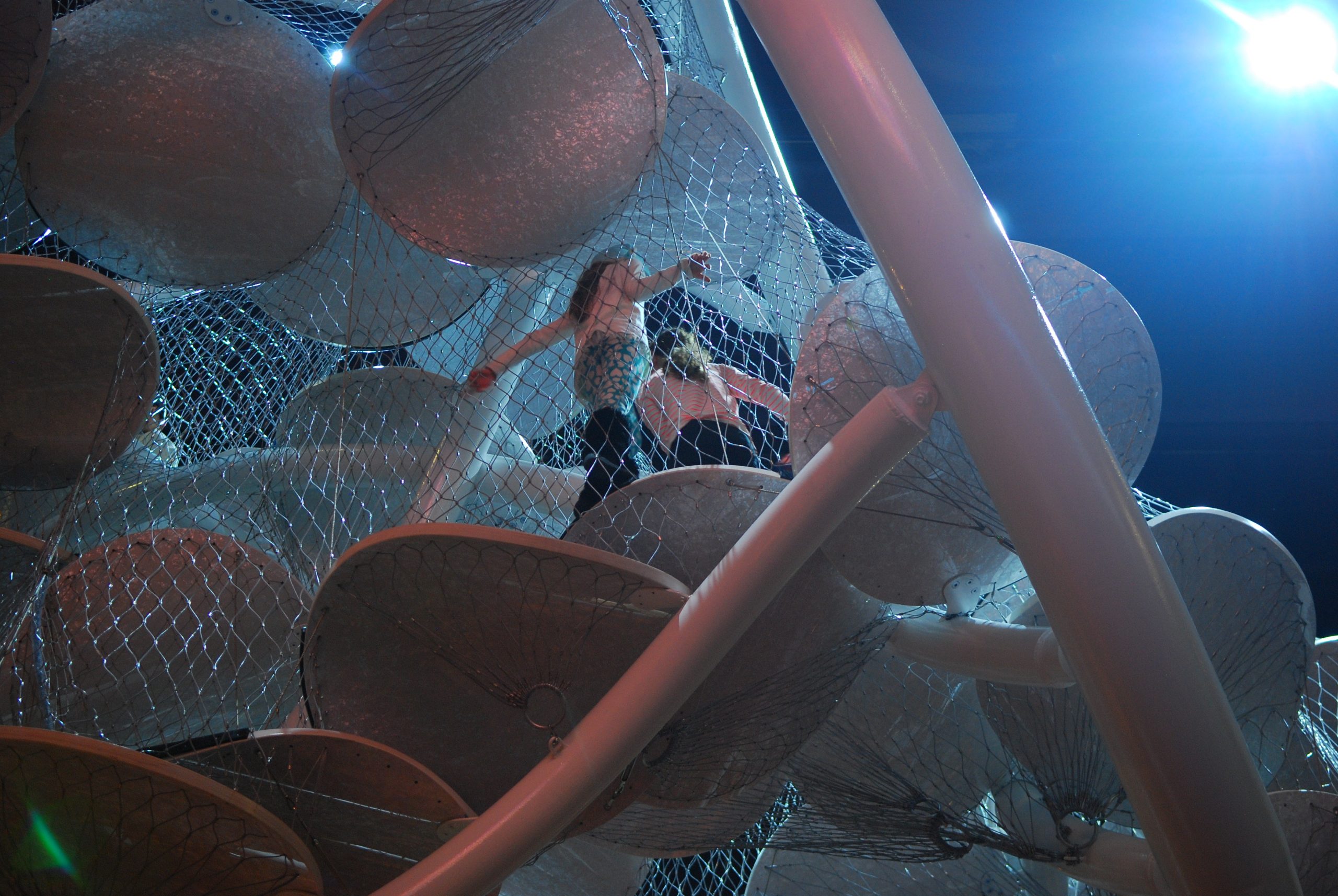 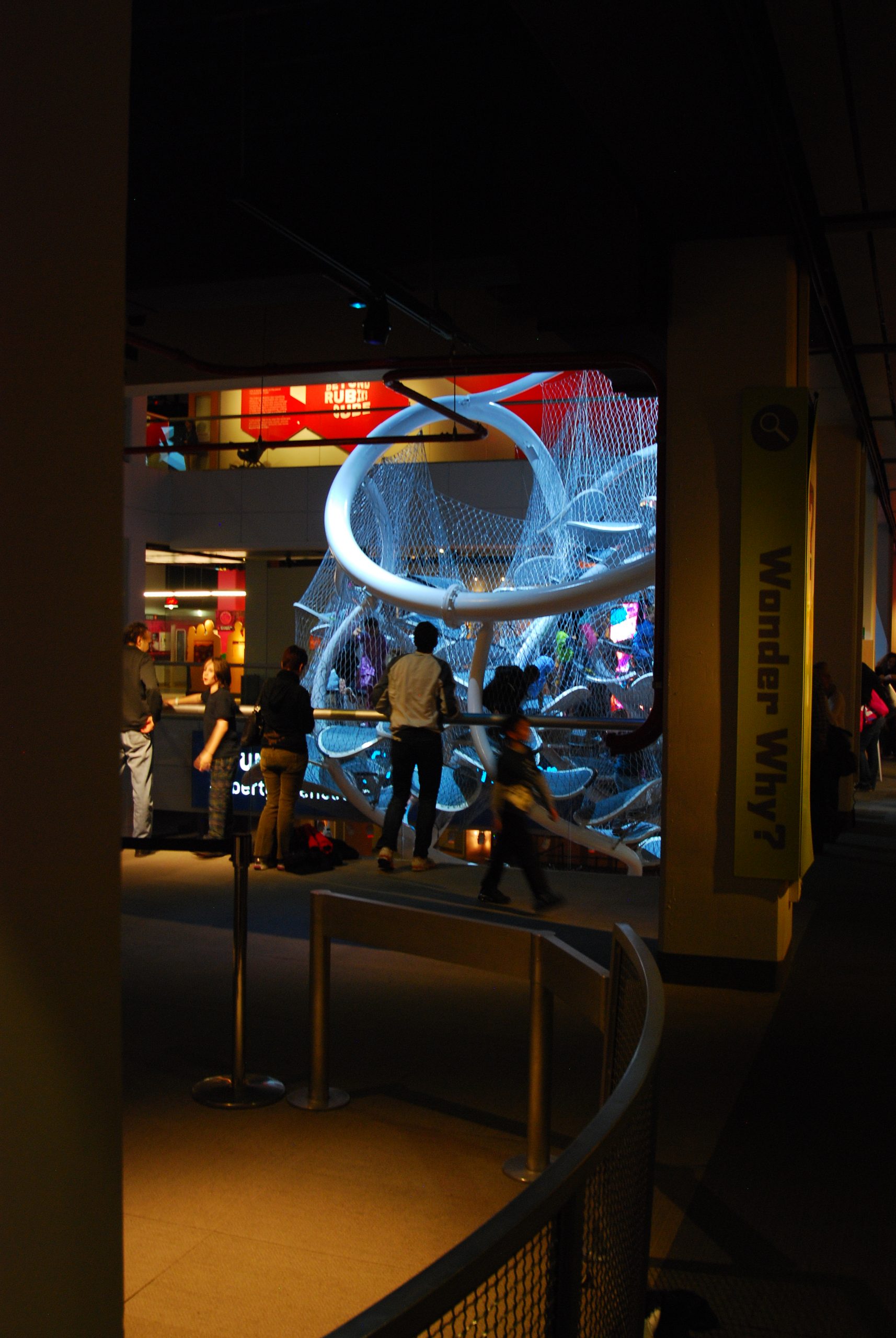 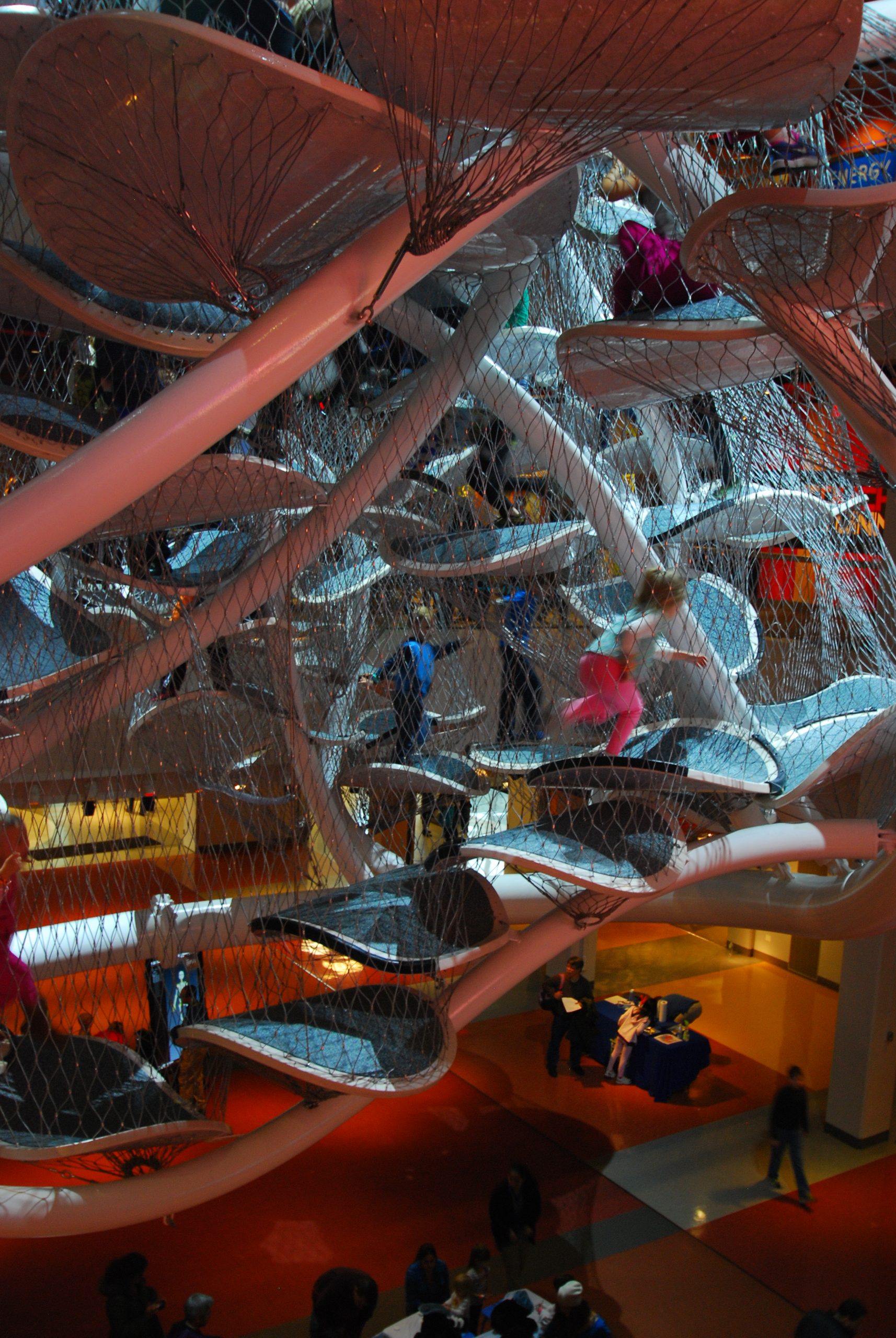 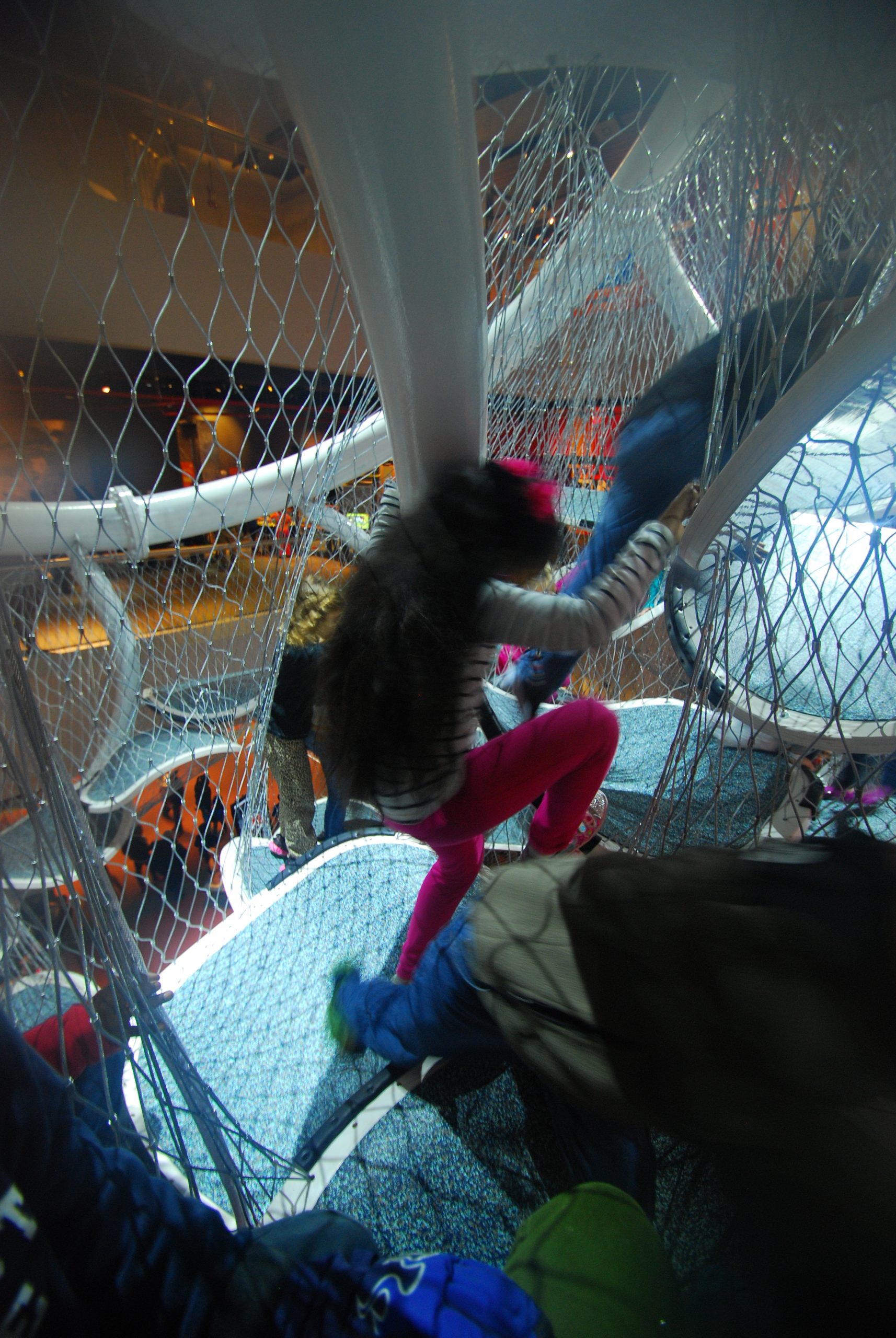 The Infinity Climber at Liberty Science Center was conceived as an expression of relativism. The continuous twist of the superstructure gives it many aspects. The climber, like differential calculus, freezes all variables but one. Visitors inhabit the variable; navigating meandering choices which bring about unique experiences of the space. Visitors can choose to get lost or find their way on an infinite circuit of routes which continuously deviate and merge with each other.

Following the conclusion of a popular temporary exhibit occupying its upper atrium space, the Liberty Science Center looked to commission a more permanent, signature installation that would be highly interactive. Given the prominence of the location inside the building, the project had a dual imperative to be both pedagogically and artistically stimulating – a contemporary complement to the Center’s iconic Hoberman Sphere. Ideally, the project would project a strong visual impact from the outside to entice visitors to enter, and once inside, it would keep them engaged through a spatially-rich physical experience. By presenting a habitable structure cantilevered off the second story of the atrium with no connection to the floor below, the Infinity Climber electrifies the space it occupies, looming large over visitors when they enter the atrium, and thrilling children and adults alike who dare to venture inside.

Luckey LLC presented initial sketches for the Infinity Climber to the Liberty Science Center in late 2013. Luckey and the Center both agreed that for this project, a bold approach was needed, and the intricate three-dimensional forms resulting were unlike no Luckey Climber built previously. Realizing this ambitious project in built form required close cooperation between Luckey’s designers, the Center’s staff, and BALA Consulting Engineers, who provided valuable input on the project’s structural engineering, including optimizing the design of the Climber’s steel structure and the placement of the anchors securing the project above the atrium. Luckey LLC prefabricated the Climber at its workshop in New Haven, and installed it on site at the Center in Jersey City to open for the summer season of 2014.

Since opening, the Infinity Climber has been a huge success. Demand for the Climber is so high that during peak periods the Center has to place a time limit on climbing sessions to allow more people to experience it.