In Love With The World - CODAworx 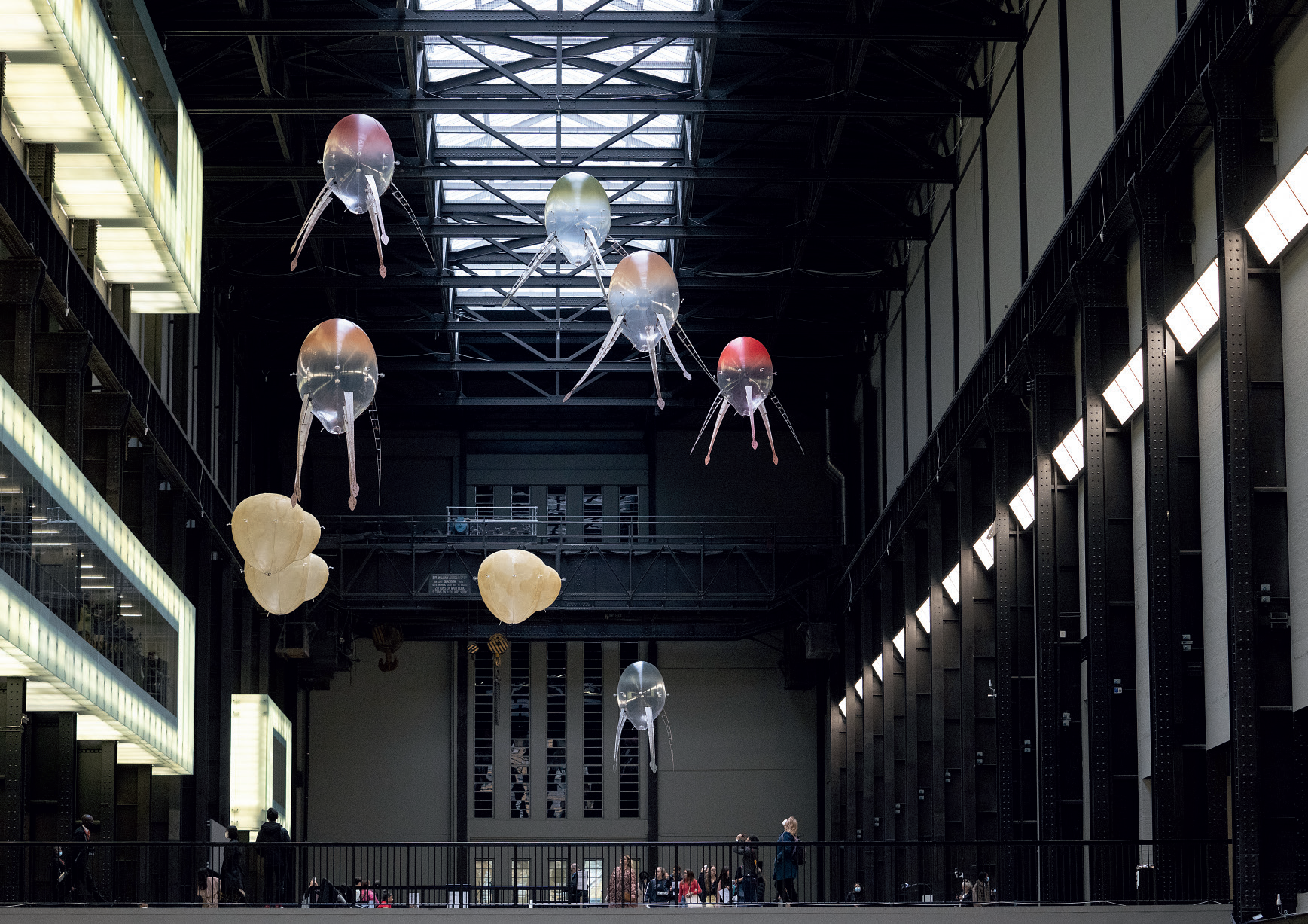 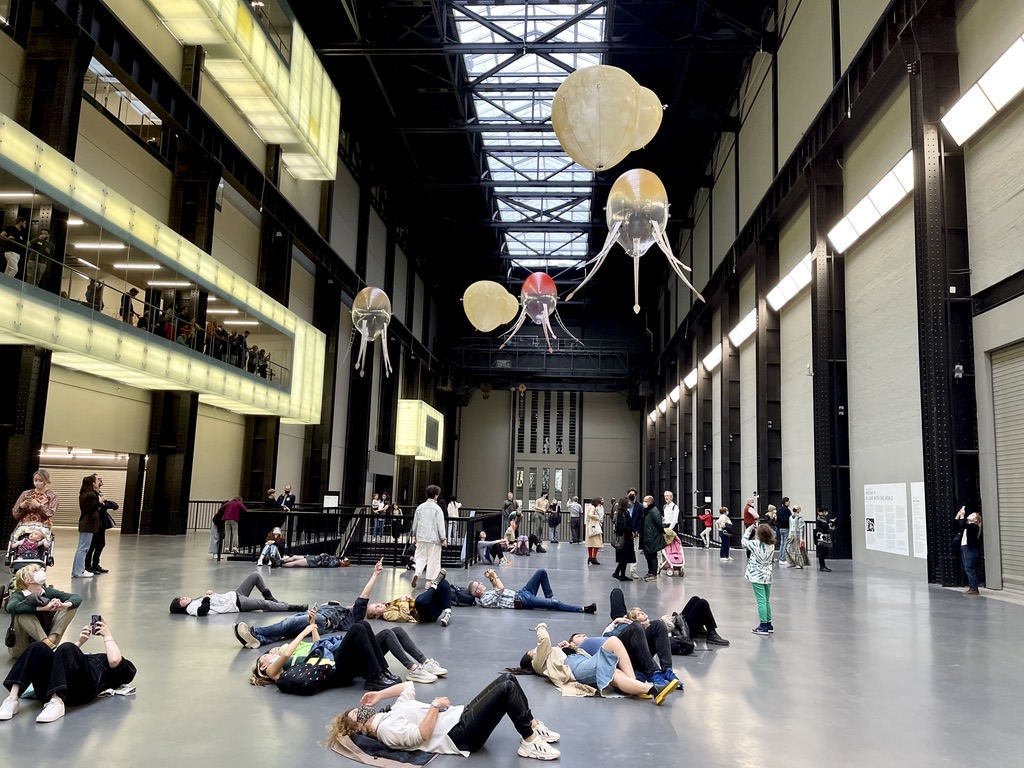 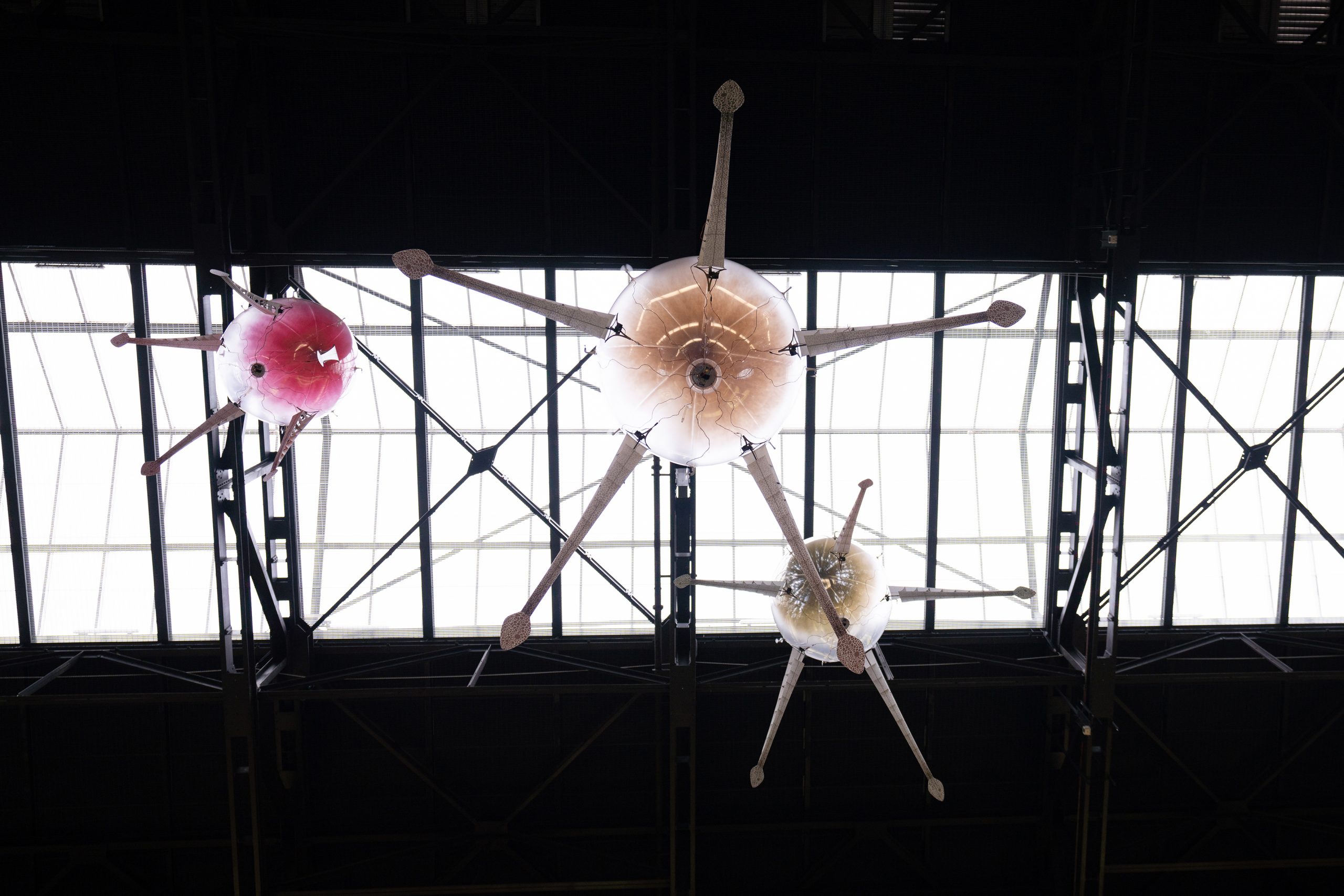 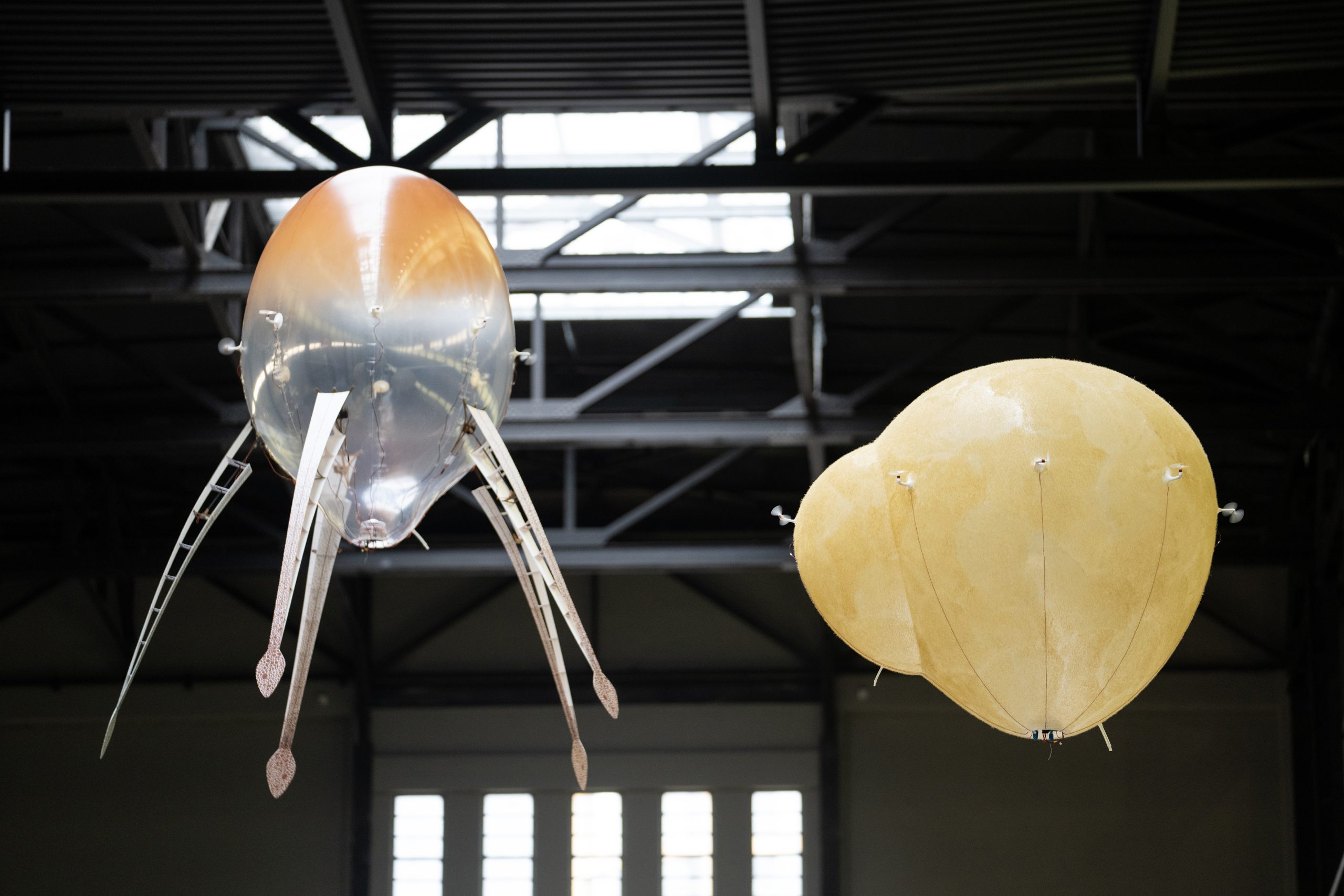 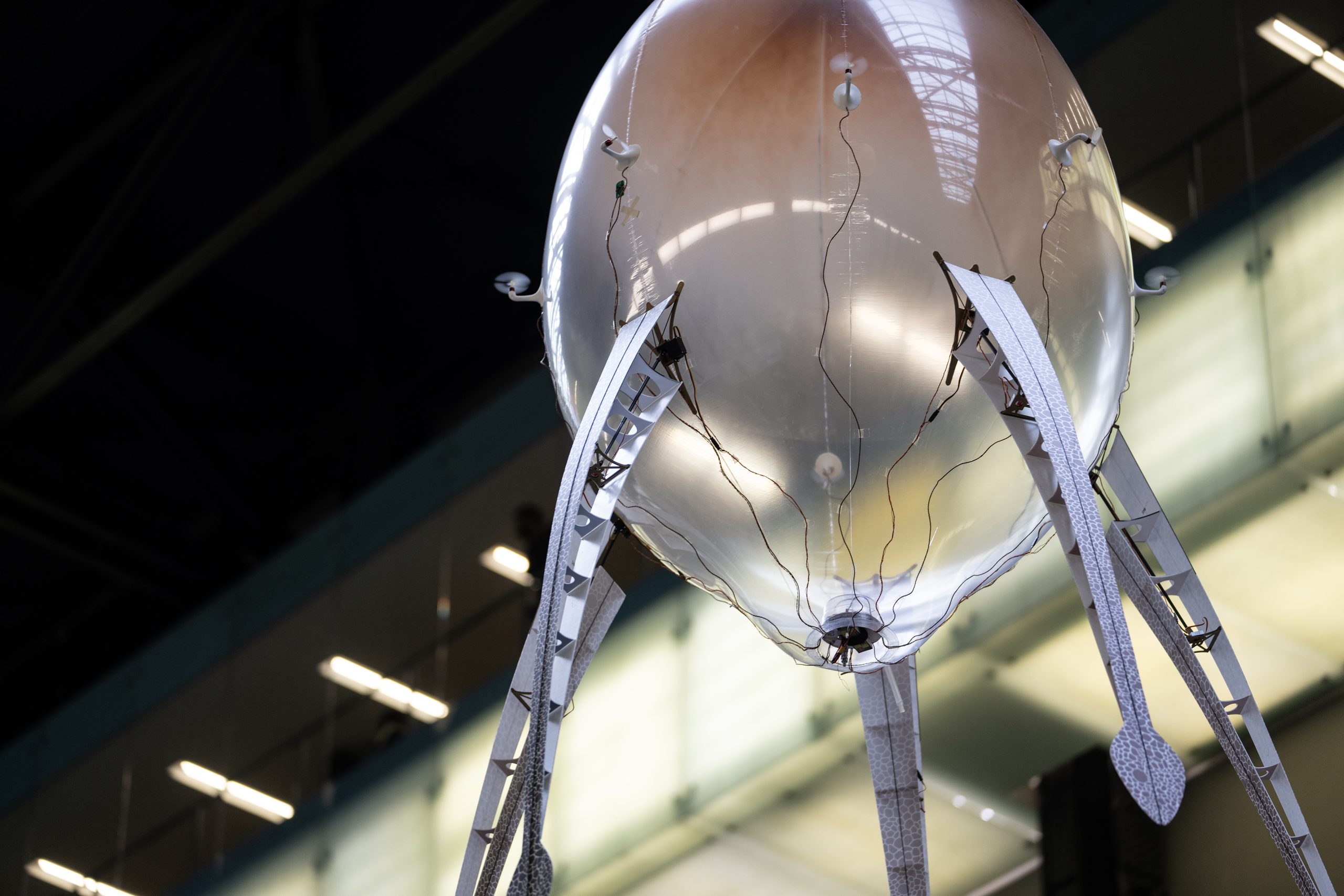 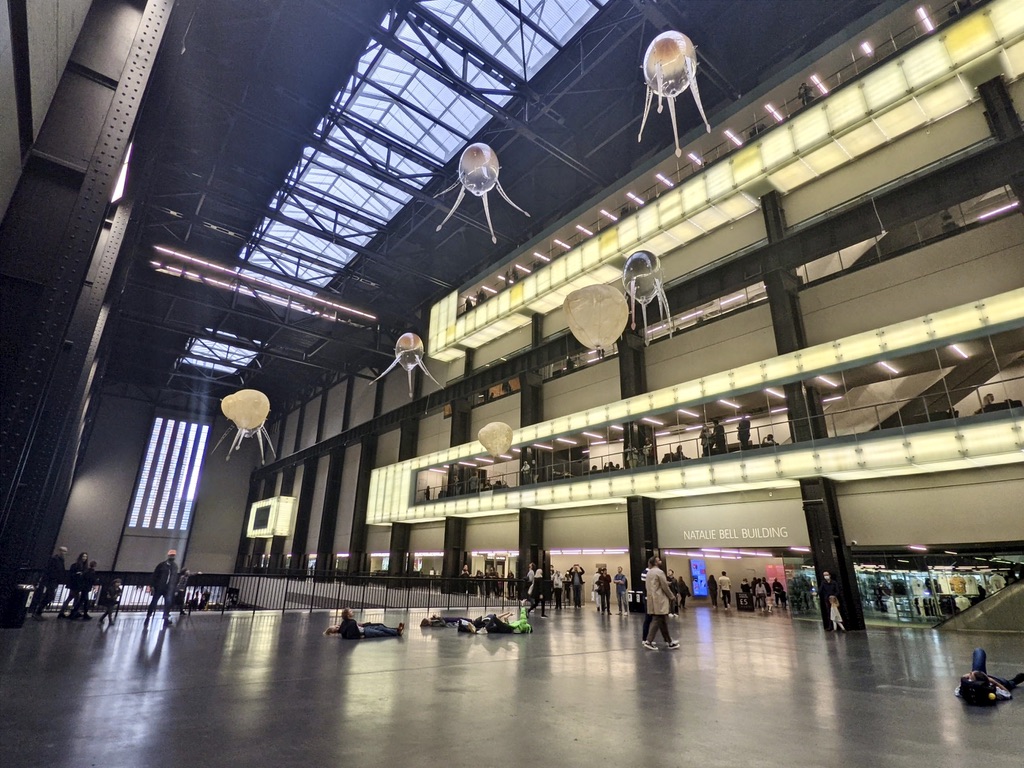 In the public imagination, we think of machines in binary dichomotomies – either as a master or slave to the human race. Either machines exist to serve us, or if they become intelligent enough, will take over and control us. But what might a world look like where machines have broken free of this dichotomy, and instead we think of them as a new branch in the tree of life?

To accomplish this, a unique experience was created for the visitors to the Tate Modern’s Turbine Hall, a former power generation plant. We collaborated to turn more than 35,000 sq ft of open space into an aquarium of machines that could immerse audiences into a speculative future where machines roamed wild like animals. We created two species of helium-filled flying machines, called Aerobes. They are controlled by a fully autonomous artificial life simulation that gives each species its own unique set of motivations for navigating the world. The two species were left to roam fully autonomously for four months in the Tate Modern, where they would freely interact with audiences every day.

To break us out of this way of thinking, we wanted to challenge audiences to think of machines using another comparison -- animals. Animals have been used for millennia as tools, weapons, and companions without replacing humans; we hope that by making machines more reminiscent of animals than humans, it will encourage our audience to think of new possibilities of how we might partner and collaborate with this emerging technology.

We collaborated with conceptual artist Anicka Yi to develop a cohesive set of life-like motivations, behaviors, and goals for the Aerobes based on artificial intelligence research. In our design we sought to balance both the foreign and familiar, so that these biologically-inspired robots would allow visitors to simultaneously relate to them, as well as be awed by them.

This project involved collaboration across a multitude of organizations and project teams to pull together such a visionary installation. First and foremost we worked most closely with Anicka Yi, the innovative conceptual artist that received the commission for this work. The physical forms and behavior of the Aerobes were based on modern research into a variety of organisms, including jellyfish, mycelial networks, insects, plants, and even bacteria.

One species of Aerobe, the Xenojelly, is based loosely off of the medusa form of the Aurelia sp. jellyfish (also known as Moon Jelly). Its movements in the hall are based on the real-life behavior of these jellyfish. Our versions of these machines are interested in seeking out and interacting with visitors, and will engage in social behaviors to communicate their findings with each other.

The other species is called the Planula, and largely ignore visitors in favor of focusing on their environment. They can sense elements of the environment that visitors can't see, and spend their time tending to these invisible environmental structures, leaving markers for other Aerobes to interact with.

Just like real animals, the Aerobes have their own senses, their own forms of communication, and novel ways of moving about the hall. The artificial intelligence that programs takes all of this account to create a realistic model of behavior based off real-life animal ethology. The behavioral model used for them was extensively tested with audiences before the launch, focusing on motions and behaviors that communicate intelligence, social behavior, and even personality, without resorting to directly anthropomorphizing them. The balance of familiar and alien was extremely successful, with visitors being captivated by the Aerobes. Visitors rarely described the machines as "robots" in user interviews, and not only enjoyed their presence, but could be seen meditating with the machines or even playing with them. This all goes to show that visitors didn't see them as machines, but something that they could engage with as lifelike creatures. By allowing visitors to experience a potential future as vividly as they feel the present, we hope to transform our collective relationship with machines towards one of cooperative partnership.