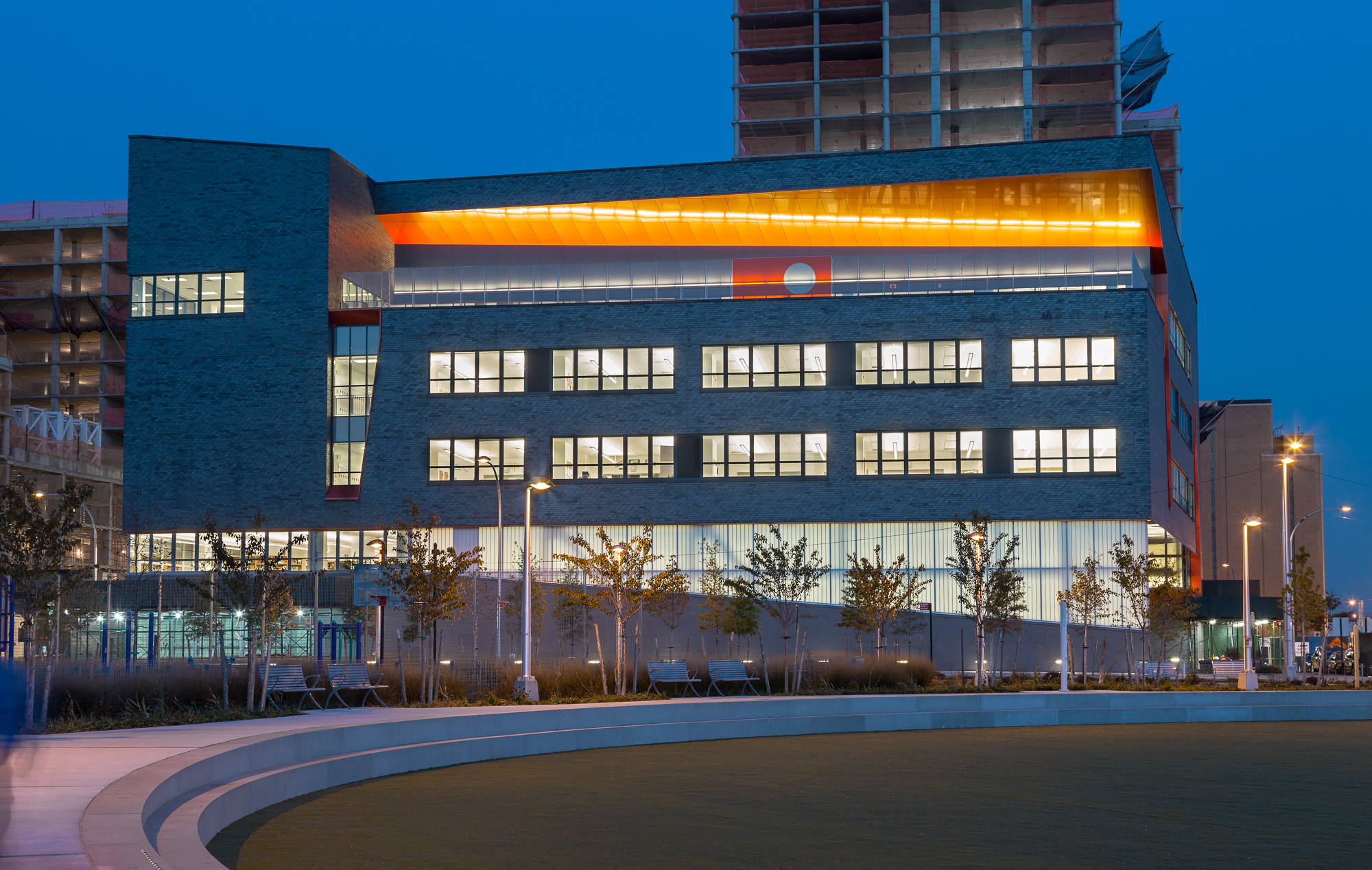 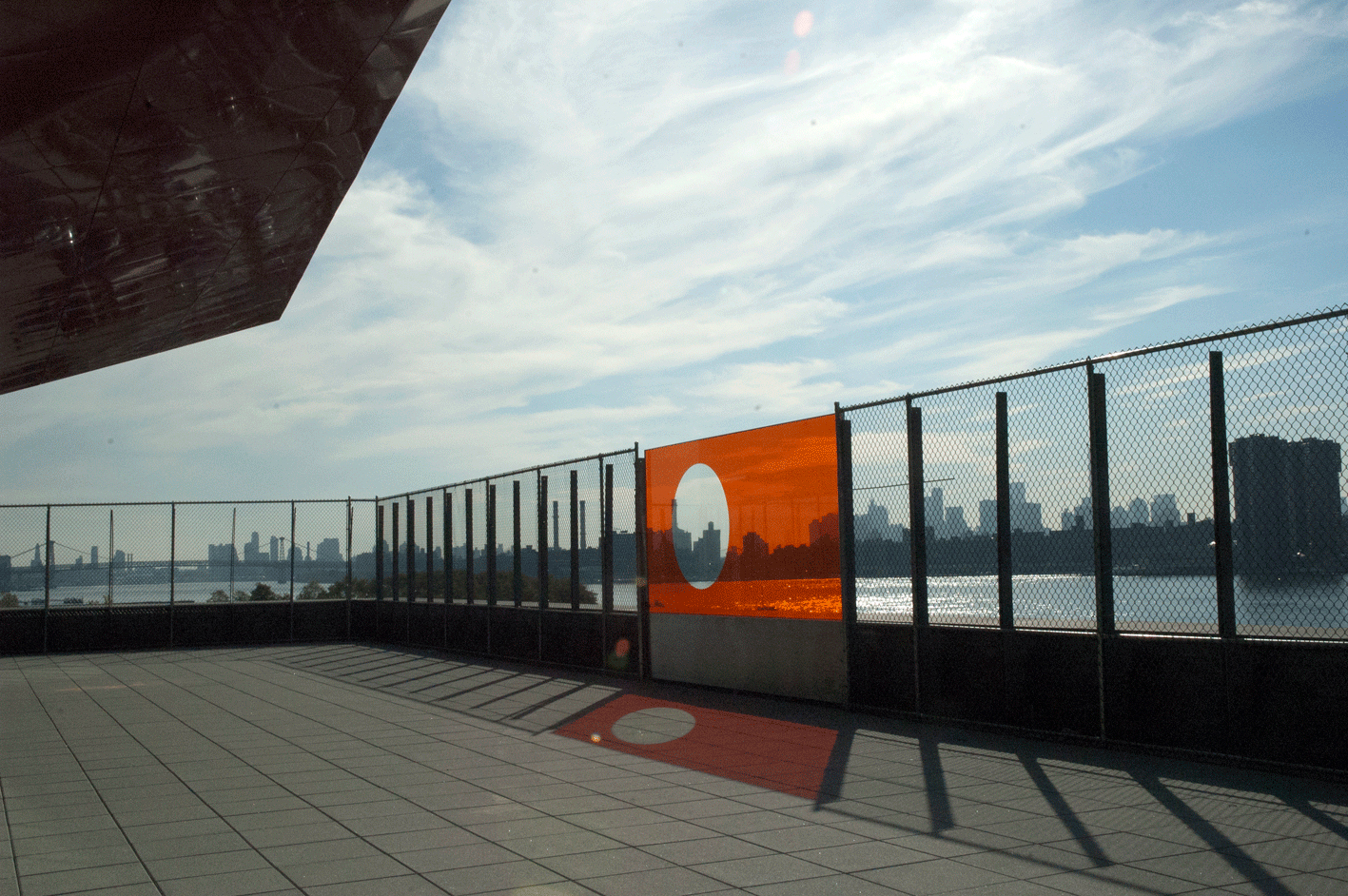 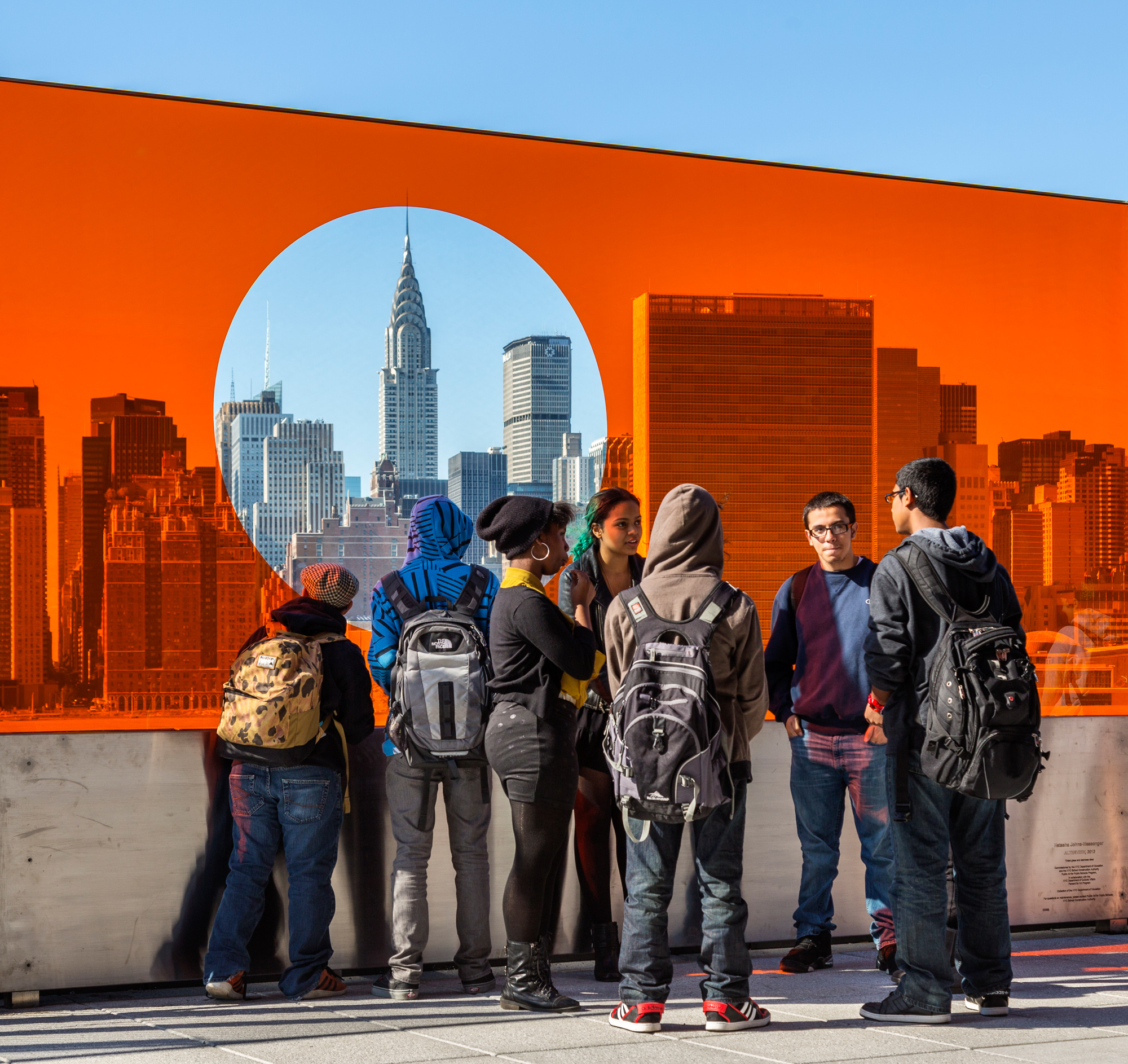 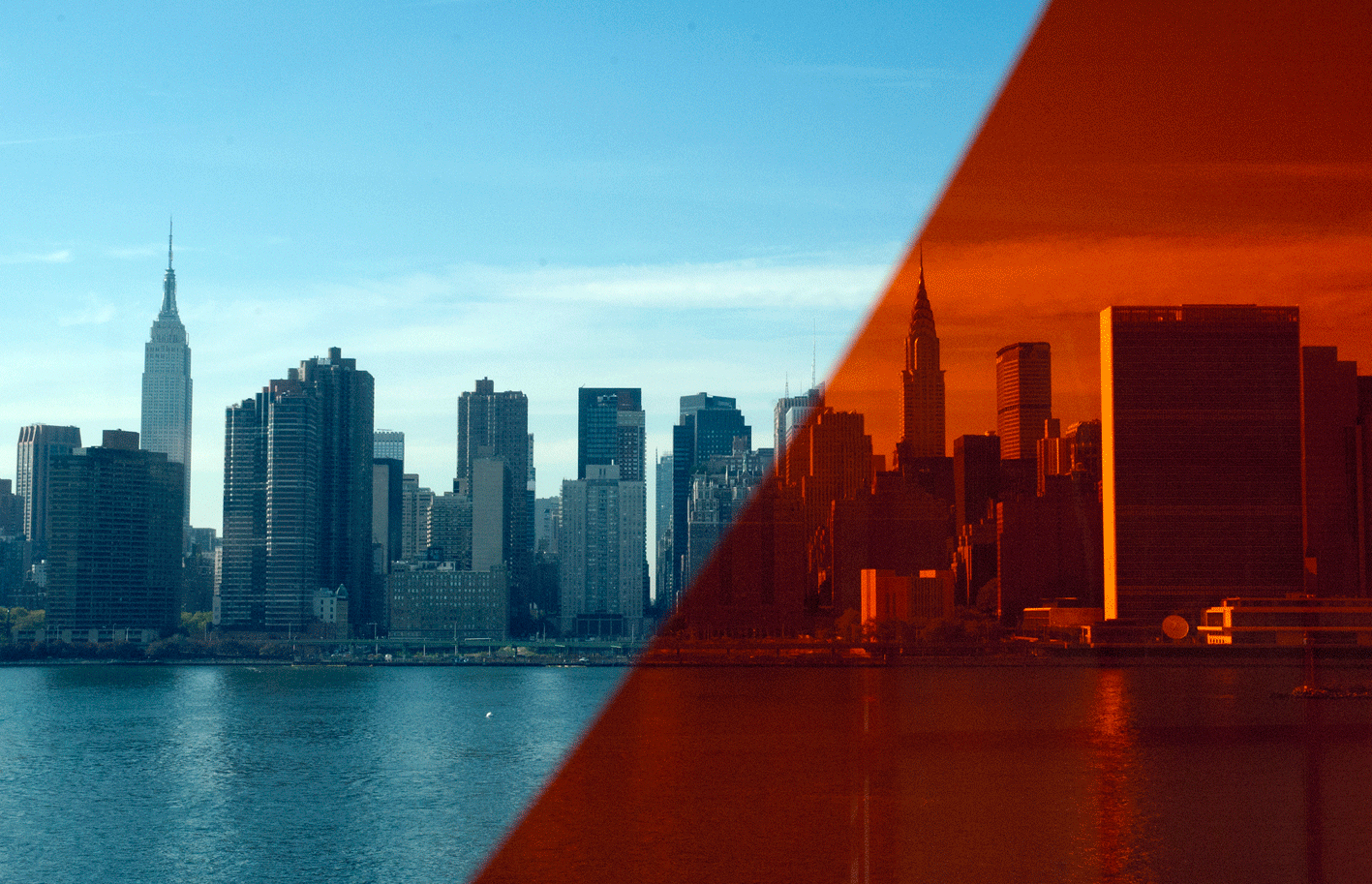 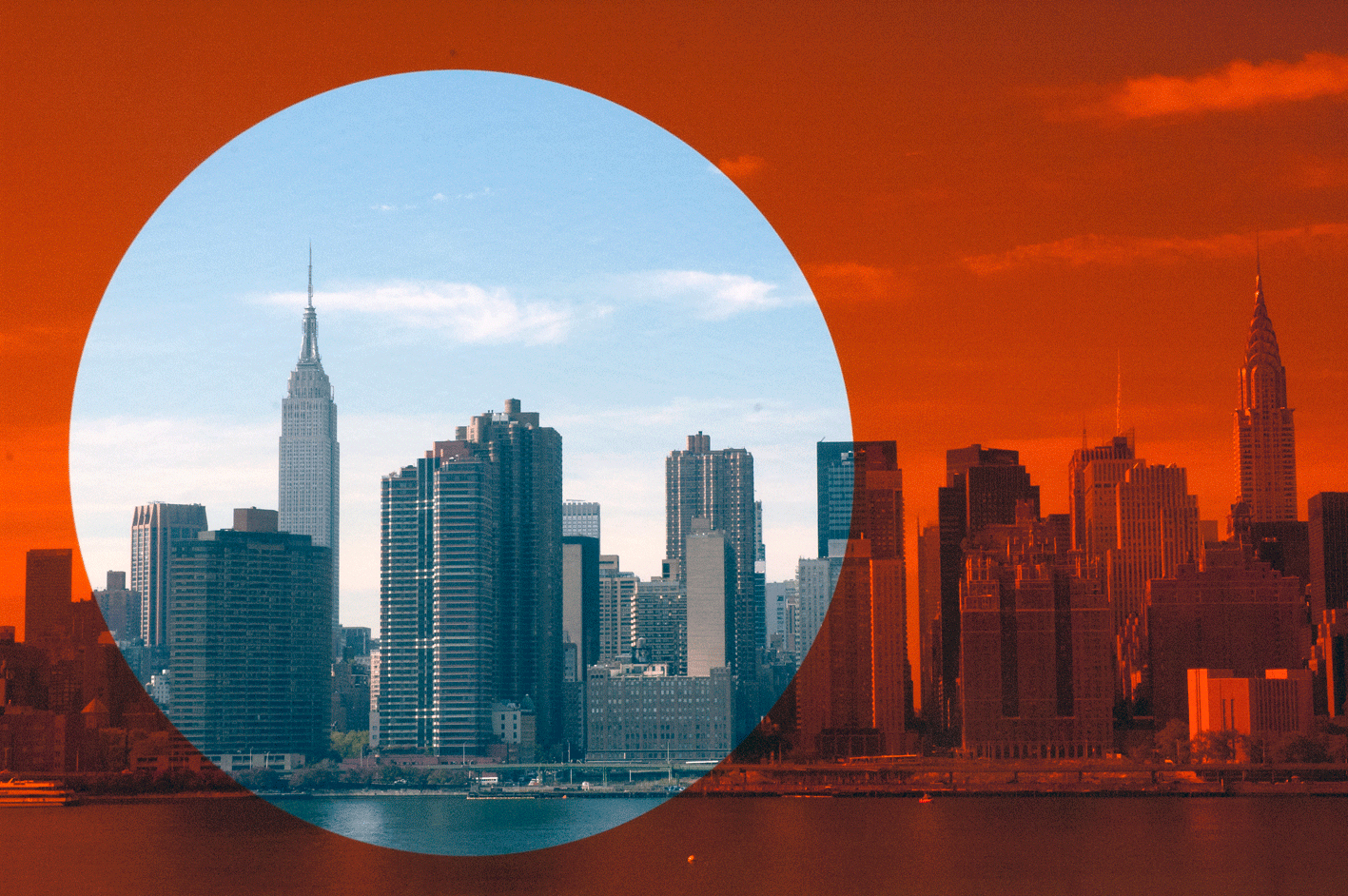 A previously undeveloped parcel of the Hunter’s Point South Development in Queens, NY serves as the site for a 145,000-square-foot school for 1,071 students. Comprised of an intermediate, high, and District 75 special school, the building is designed so its programs function independently with their own distinct learning environments while sharing common spaces, such as an auditorium, library, cafeteria, and terrace. After the school opened, Alterview, an installation by local artist Natasha Johns-Messenger was unveiled as part of the terrace. The piece comprises a large sheet of colored glass, delivering a heightened perceptual shift through the use of complimentary color.

It was critical that the artwork chosen reflect the character and intentions of the school’s design, in particular, the sweeping panoramic views of the Manhattan skyline from the fifth floor terrace. Natasha Johns-Messenger, a self-described “sight” artist, has produced a number of site-determined spatial installations that activate an experience of perceptual paradox in the immediate environment and was interested in creating a piece that both integrated into the architecture and elevated the student experience. Messenger has stated that the general conceptual objectives and theoretical agenda underlying the installation work has been threefold: one, to dissolve parameters between art-object and its context by using the site as subject; two, to change the way immediate space is perceived or viewed by developing modes of representation such as real-time image capture inside optical viewing structures; and three, to create a work that is predominantly experiential (not object based). Undeniably experiential, in looking at Alterview, the viewer vacillates between architecture and artwork.

The installation was commissioned by the NYC Department of Cultural Affairs for its Perfect for Art program. Initiated by the NYC School Construction Authority (SCA), there was a call for entries in which artists were invited to submit samples of their work. Natasha Johns-Messenger was quickly favored by both FXFOWLE and the SCA for her complex understanding of physical optics and interest in distorting the line between reality and false perception. After a series of meetings, it was decided that the installation would be integrated into the terrace. Coincidentally, this was at the same time that FXFOWLE was revisiting the guardrail system, looking to replace the perforated panels with something more transparent in order to maximize the view. Natasha’s installation was perfect for achieving this desired look, and Alterview was designed as a clear round portal within a bright orange freestanding piece of glass; a view within a view.