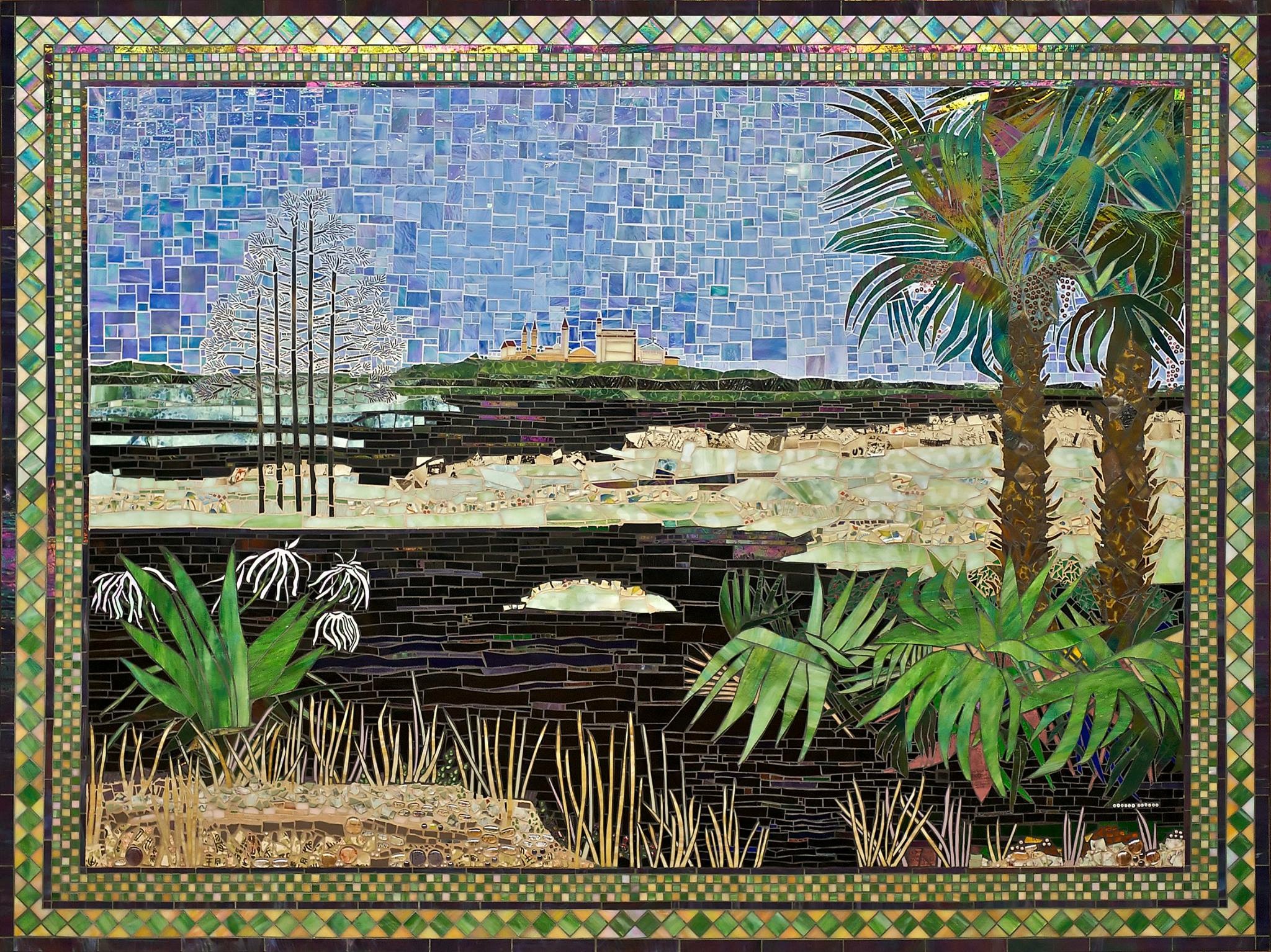 The mosaic, Marsh Scene, provides a calm diverting respite for the families of dying loved ones. I was given the interior designer's color-board and asked to make two large, 6'x8', mosaics depicting the natural beauty of this area. I chose the Marsh Scene which looks west, with St Augustine on the horizon (this mosaic) and the Beach Scene looking east over the coast. Mosaics at Flagler College inspired the border pattern.

The interior designer emphasized the importance of serenity and calm in her color palette of soft sage green, pale lavenders and beige. The walls were covered in a lovely green 'grass' textured paper evoking nature. The ceiling was made of dark wood in-laid slats, the same color as the wood molding the contractor framed the mosaics after my husband and I installed them. The mosaic is in four sections, 3'x4' each, which were almost finished in my studio. Once the four sections were assembled on the wall, I worked on site to finish the seams so they would not be visible. The construction crew was working overtime to finish the interior as I glued the last pieces and grouted in four colors on site. The mosaics dominate this space with a glittering, light-filled presence. Susan Ponder-Stansel, the Director of Community Hospice of Northeast Florida, wrote me that what was most praised by patients/families/visitors, after the quality of care, was the beauty of the mosaics.

Tara Regan, Interior Designer, provided direction concerning the visual impact and choice of subject, though I was given complete artistic freedom. Periodic meetings and viewings confirmed our common vision for the project. Auld and White Constructors provided enormous assistance in the form of scaffolding, extra man-power as needed for the initial installation. Mosaics are heavy! They also framed out the mosaic in a massive dark brown wood molding that perfectly coordinates with the other wood elements of the interior. We (my husband and I) got locked-in the hospice on the first night because we worked later after the crew had left and we did not realise they had locked the doors as they left. We were soon rescued! This was a unique, exciting collaboration for me.

My own father would, in 2014, be an in-patient at this Hospice. Suffering advanced Alzheimer's, my dad was unable to get adequate medical assistance in Key Largo where he and my mom lived. Finally, we decided to bring Dad to St Augustine. He was immediately put into home hospice. Soon, he needed the phenomenal, compassionate end-of-life care provided by this facility. My dad never knew about my mosaics, but is was a great comfort to me to be with him in this loving, lovely place that I had helped create.