Horizon of Day and Night - CODAworx 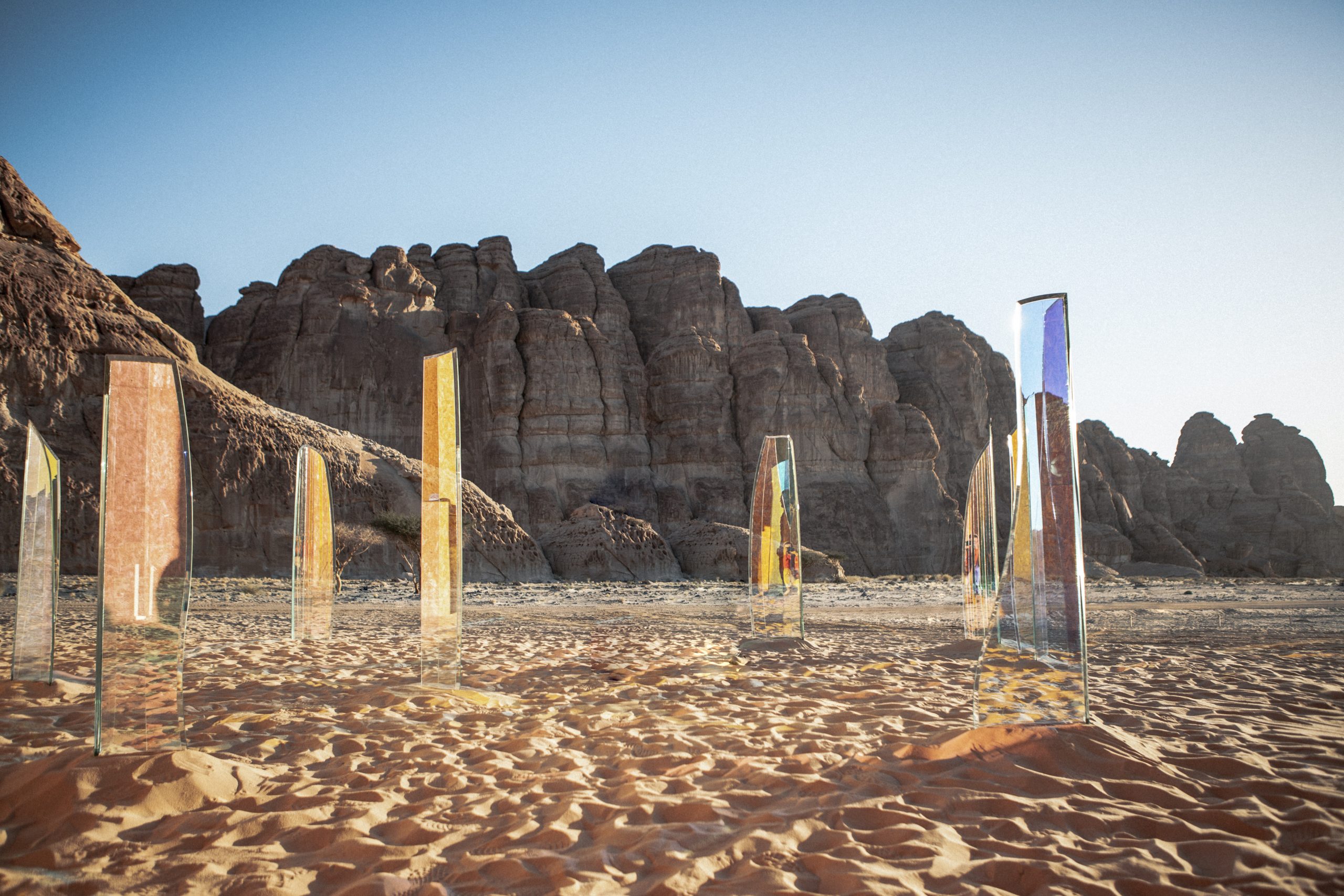 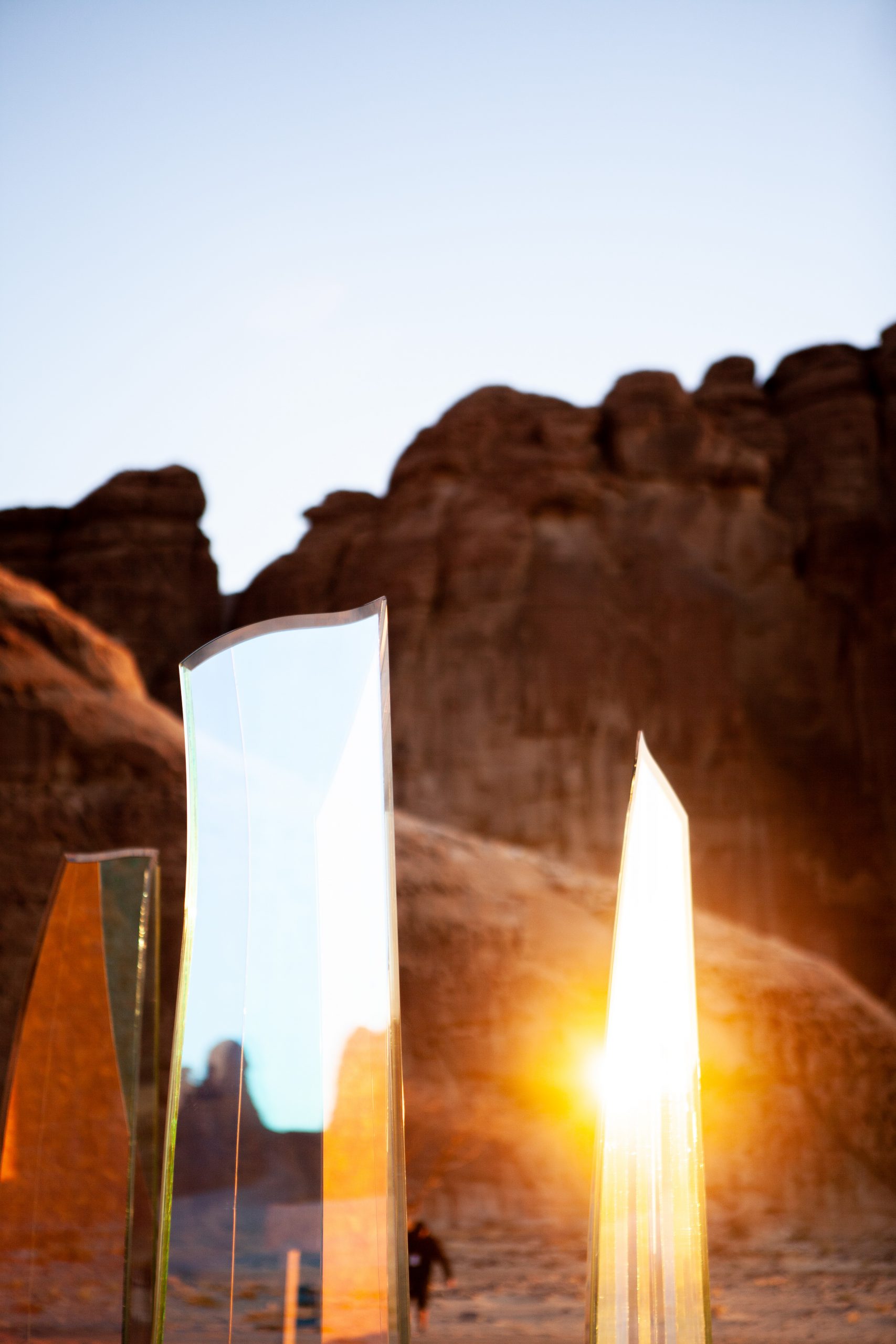 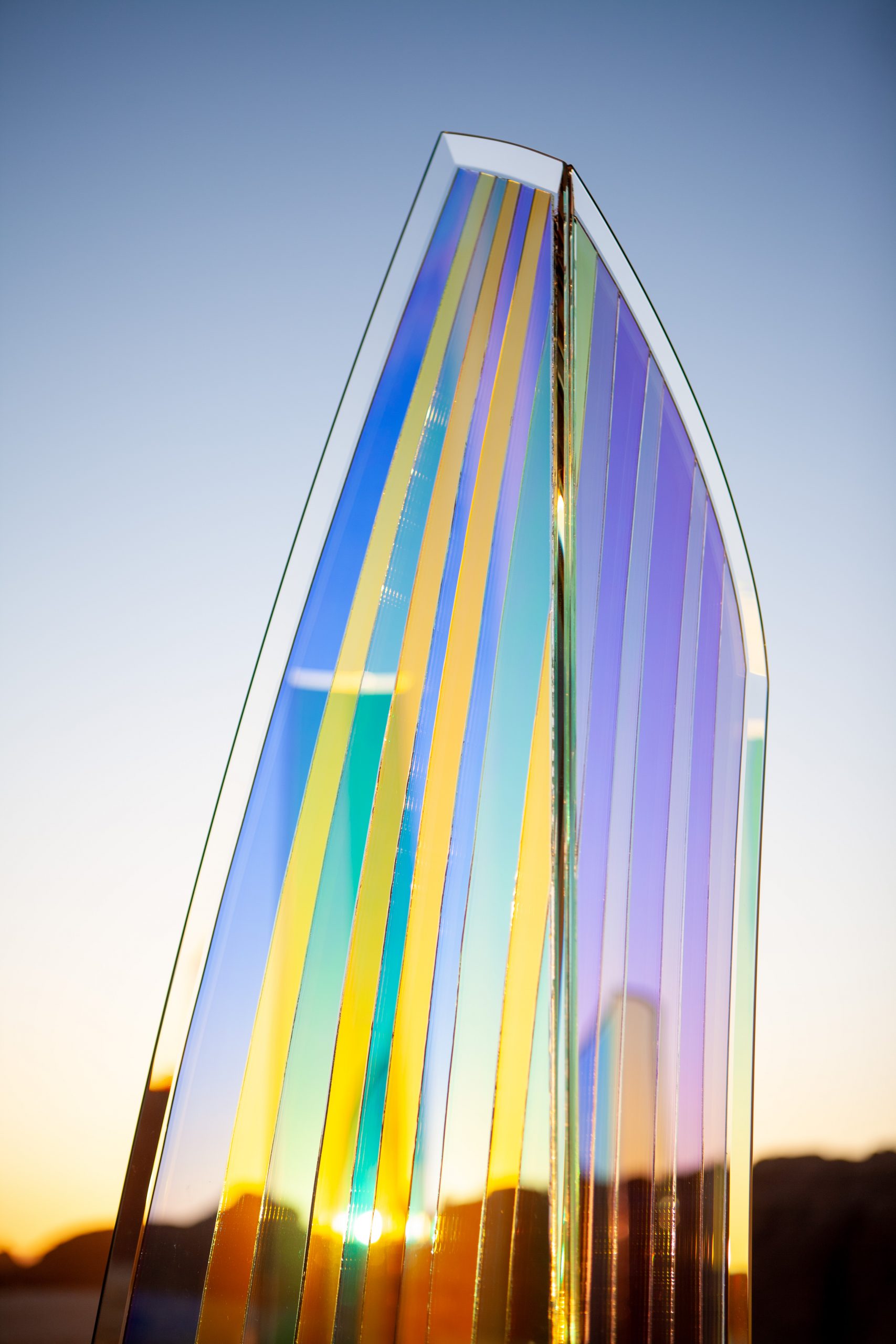 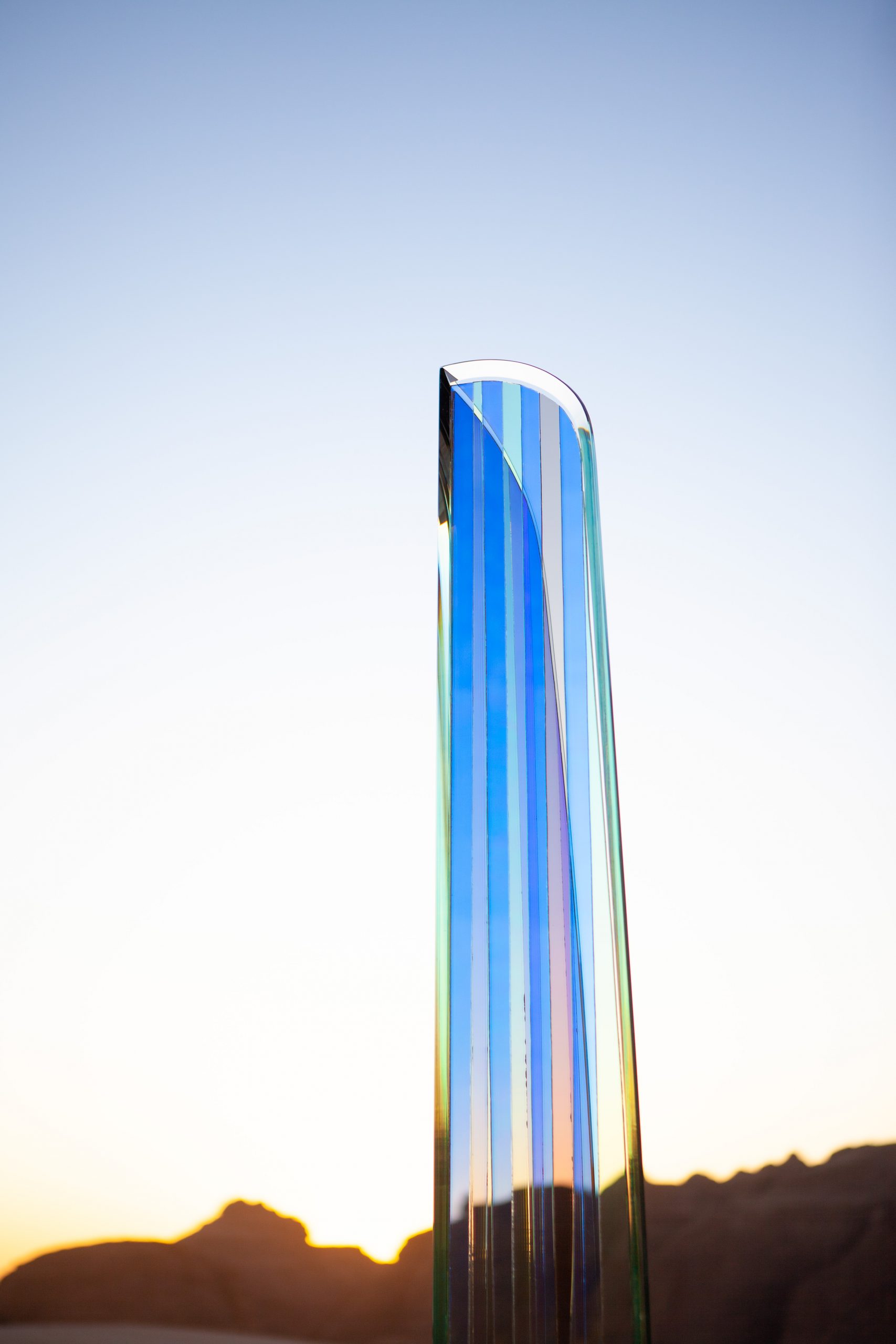 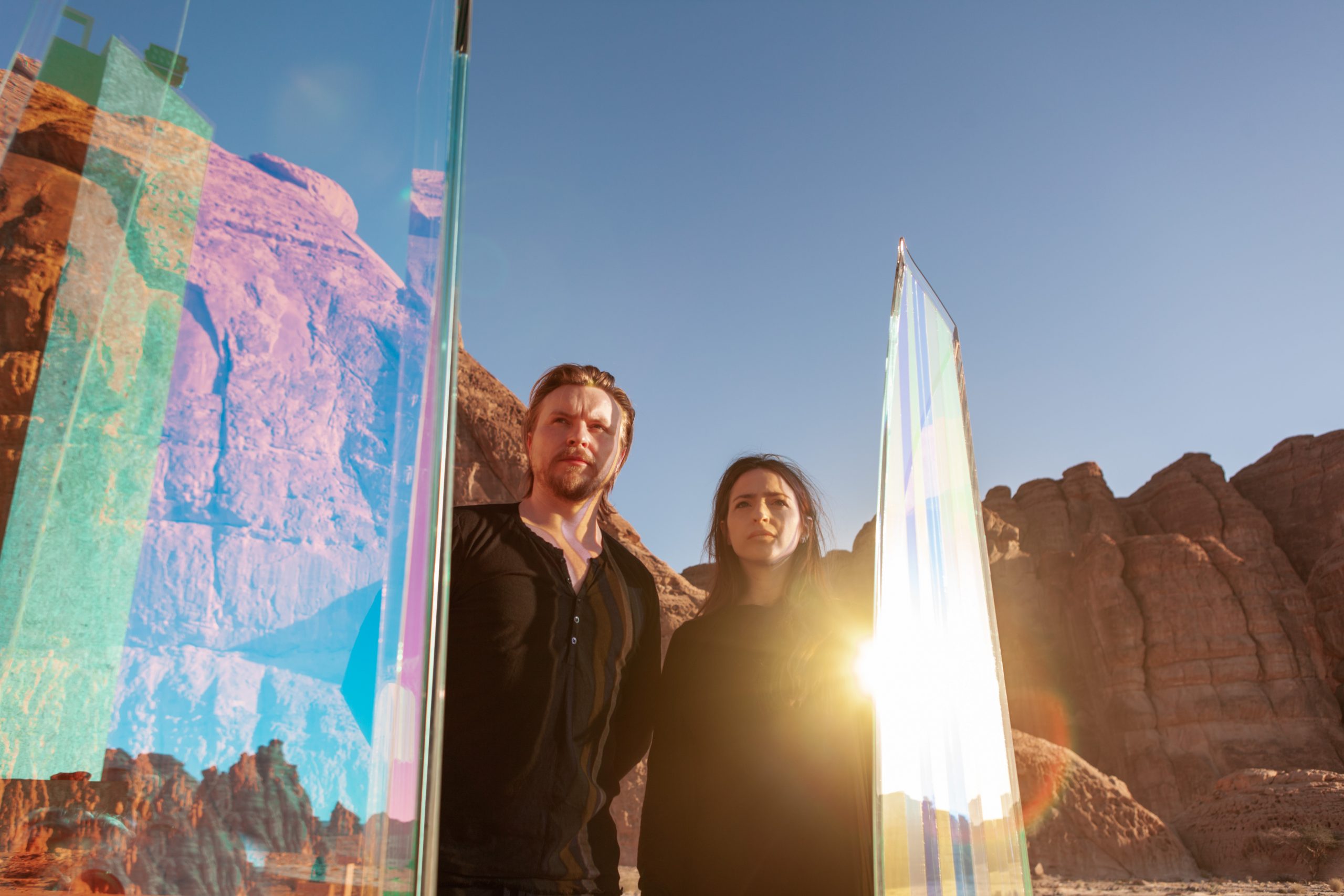 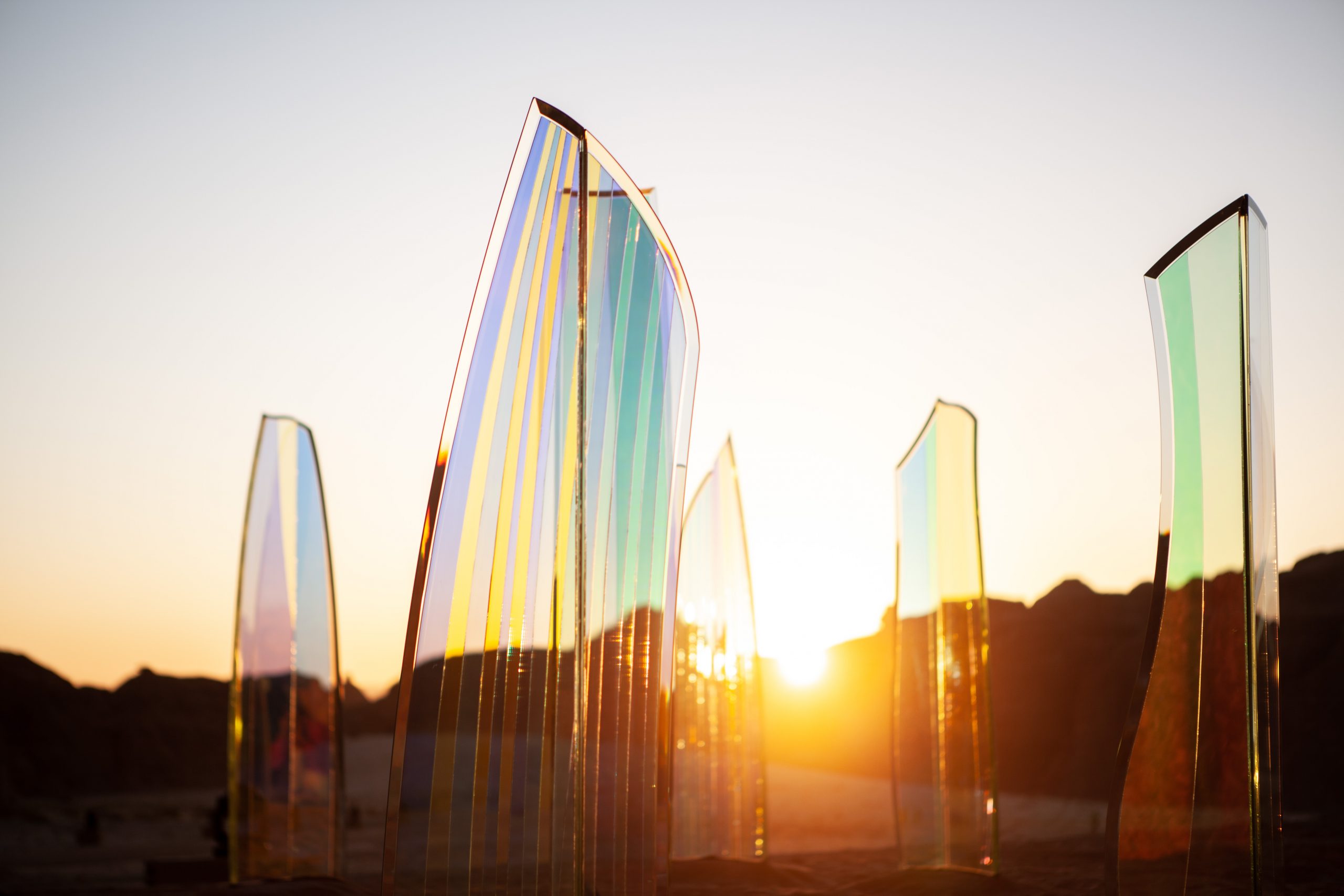 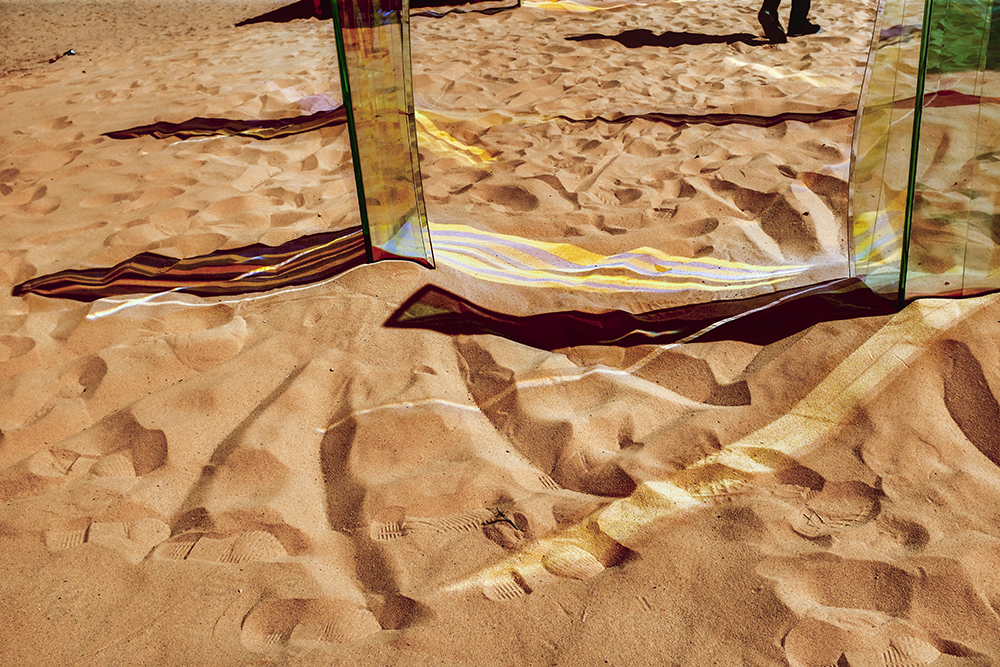 Nine prismic glass monoliths in the ancient Unesco heritage site of Al Ula were located to point to the rising and setting of the sun at winter and summer solstices and at date of installation; the south and north Polaris; and the setting of Venus, the light-bringer that connects the horizons of east and west to the celestial sky. Informed through geometric surveys of megalithic stone circles, these monoliths are pillars of light that create a clockwork of optical projections, orienting our presence in light, space and deep-time.

The orientation of the monoliths, which are aligned so as to reveal the light of the place corresponding to geo-cosmic cycles, and their colours, which are inspired by geological compositions, combine to reveal the ‘spectral fingerprint’ of the site. The spectral fingerprint of a place deals with its deep time: the light of its geological and cosmological past, interfaced by the elemental media that shape the now: Now-ness is an inter-activity.

The work sought to present the site as a crossroads between traditions; a dialogue between east and west at the astral crux. Mada’in Sala - the archaeological site and tombs located in Al-Ula contain traces of Lihyanite or Dadān (Hebrew) and Roman occupation and is viewed to be a site of diverse spiritual significance. The artwork offers a communal gaze on the opening of difference and diversity, signified by the opening of solar light in its spectrality.

Coloured filters (with spectroscopic qualities inspired by the material geological composition of the site) and the orientation of the sculpture to the horizon and path of the sun, are all aligned so as to reveal the 'light of the place’ corresponding to its individualistic geo-cosmic and cosmo-technical setting: its ‘spectral fingerprint’. Informed by a series of spectroscopic studies, with natural sunlight interfaced by prisms and optical filters, the work that reveals this unique spectral fingerprint of a place deals with its deep time: the light of its geological and cosmological past interfaced by the cosmo-technical media that shape the now.

The artwork was commissioned by the Royal Commission for Al-Ula for the Winter at Tantora celebration, marking the 40 day winter growing season - the name of the festival being inspired by a sundial located in the old town of Al-Ula. The occasion marks a radical shift in the cultural openness of the region.

We first undertook an extensive research period, surveying megalithic stone circles, their proportions, forms cosmological and geological locations. These studies were then used to inform designs for glass sculptures that were realised at Derix Glasstudios in Frankfurt. We then developed a site-specific geometric orientation, such that each glass prism pointed to an exact point on the horizon. This process utilised traditional earthworking techniques in combination with computer modeling to align the site-specific positions of the sun, moon and planets as they intersect the horizon with points around a deformed circle, such that the perspectives taken by viewers would be connected to these site-specific astronomical coordinates and their corresponding azimuth's. The glass was then mounted into steel frameworks, developed with Cundall engineers, which were buried under sand such that the work appeared to rise up from the site.

The title comes from references in both the experience of ‘clear light’ in the Tibetan tradition and the symbolism of the ‘man of light’ in the Sufi tradition (who attains transcendent apperception through an orientation to the ‘threshold of the beyond’, that is a horizon of light encompassing East and West). It sought to induce a kind of meditative gazing following in the tradition of sky-gazing in the meditative traditions, whereby the gaze is transmuted into a form of vision that is reconnected to a cosmic temporality and where the natural sun is realised as being also an interior element of the subtle, psycho-physical body—an interior, imaginal body of light that is common to each of these traditions. In this sense the work reveals the natural sun to be both a unifying symbol and simultaneously as the producer of difference and differentiation, just as light is diffracted and refracted by media into spectral rays of colour. Rhythms of the passage of light are marked to inscribe our experience of time - traditionally codified and unified. This artwork replaces the prototypical calendrical technologies of stone with optical glass: working through mediation, light creates openings for spectralisation.