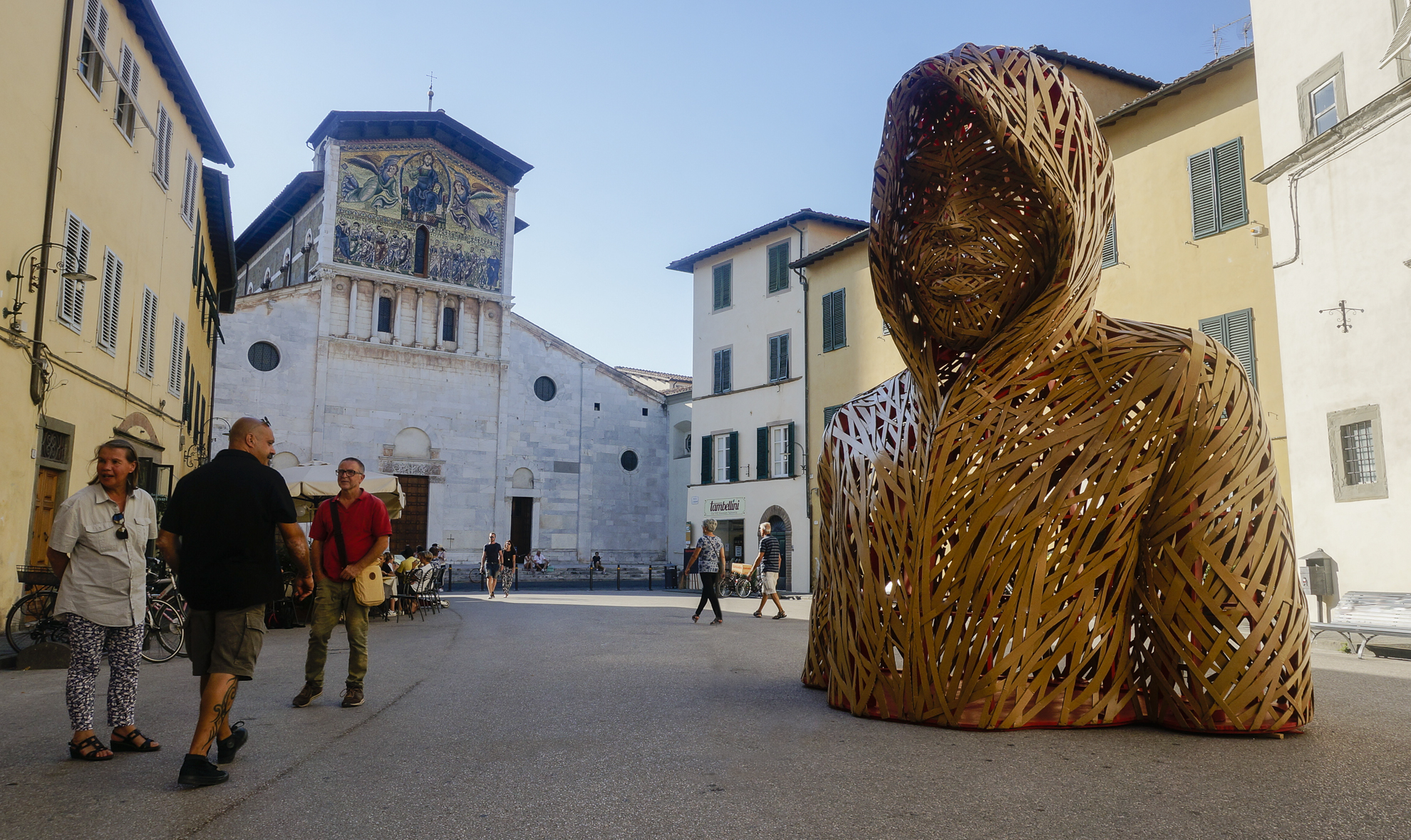 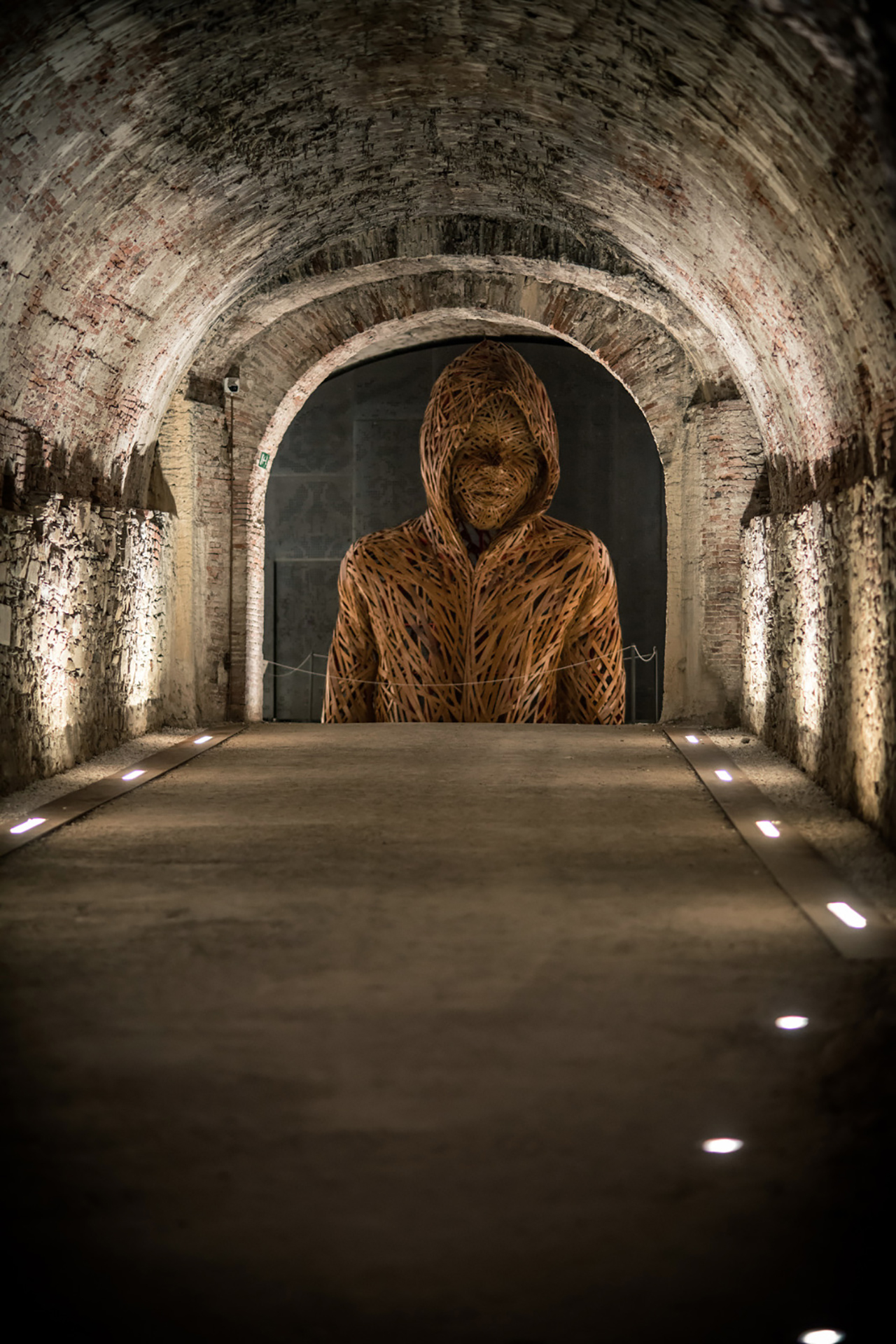 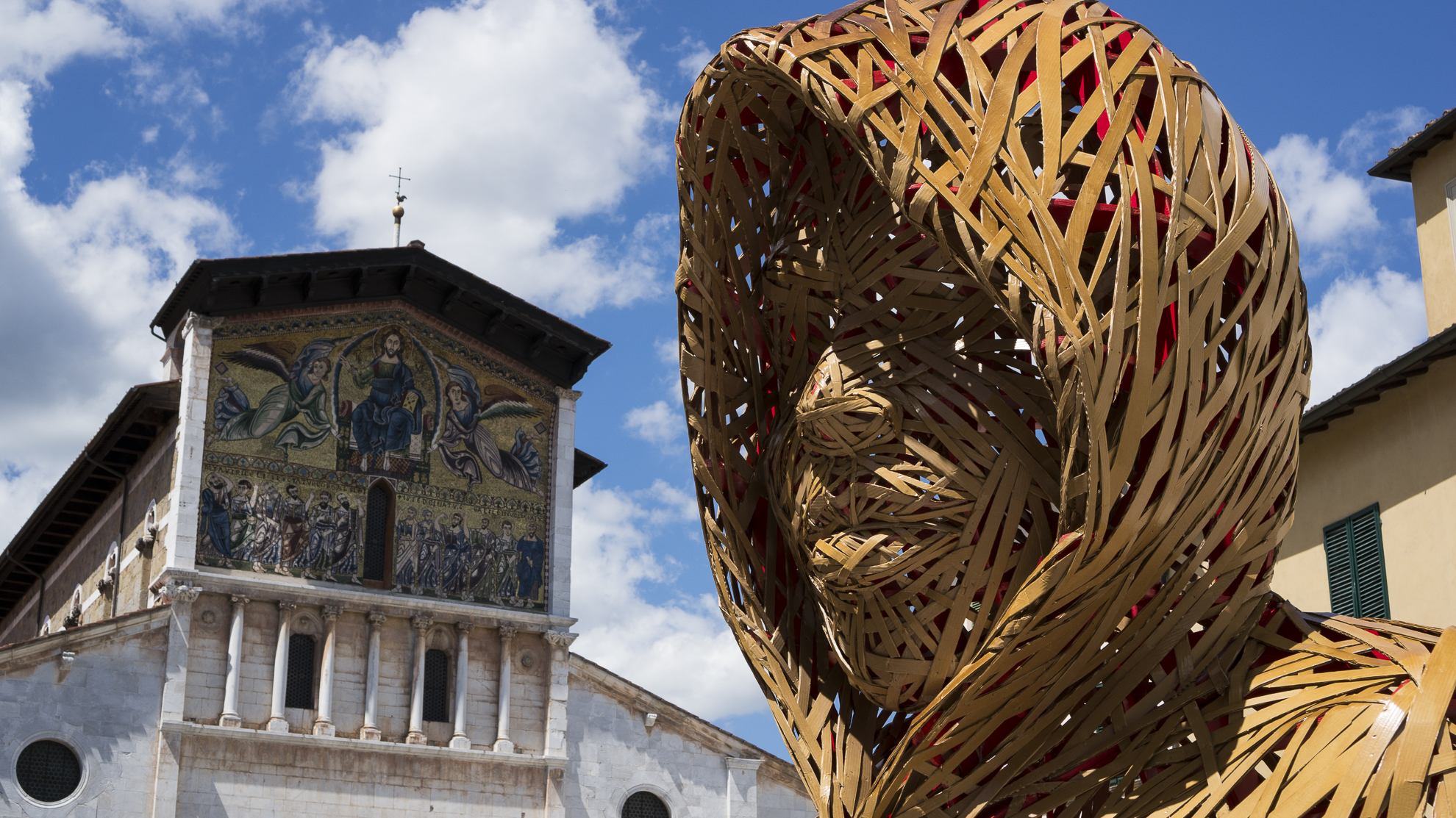 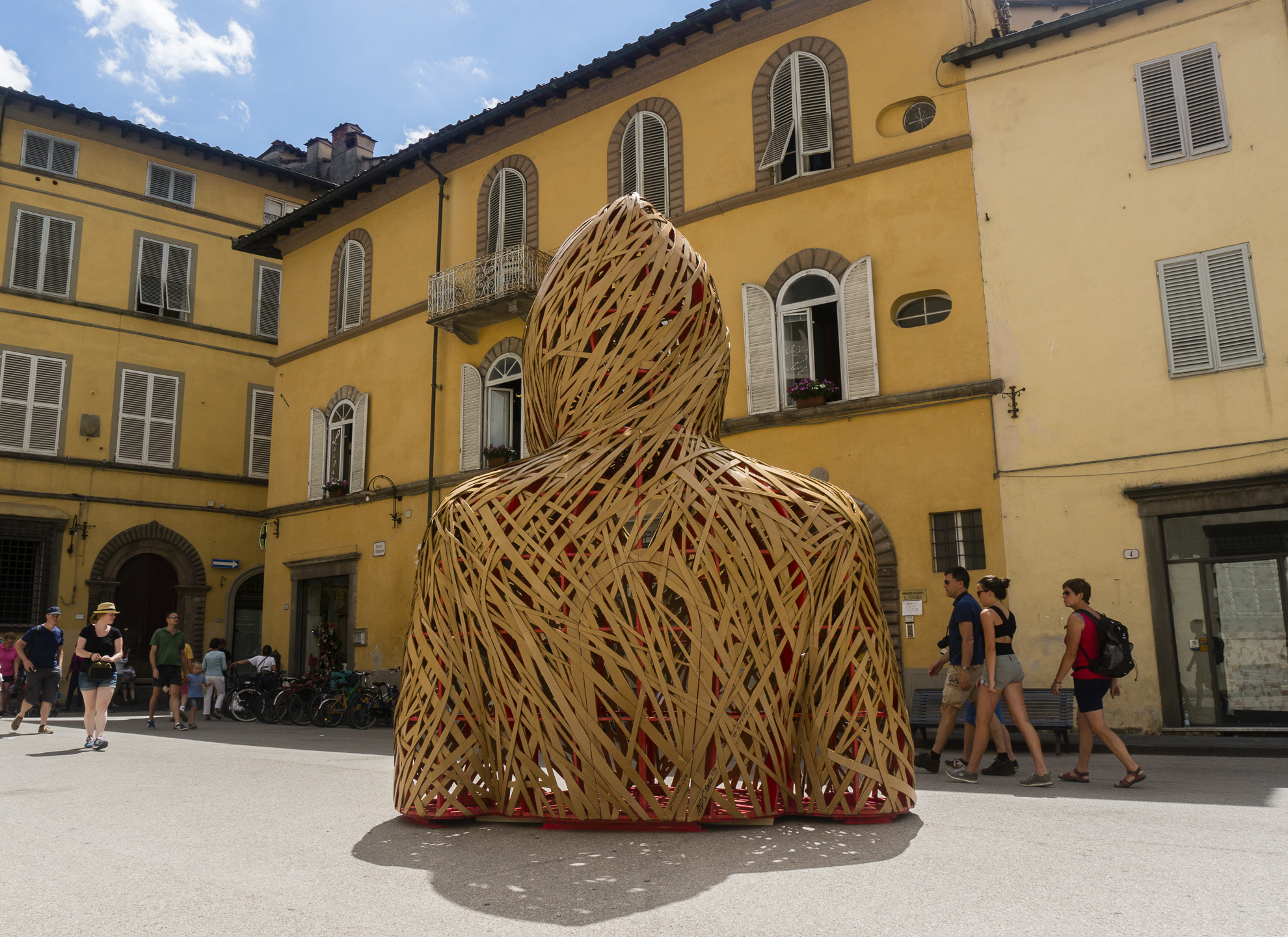 Created from corrugated cardboard glued and stapled to a plywood armature, “Hoodie” was installed at the 2016 edition of the Lucca Biennale, in which artists from around the world create paper sculptures displayed in historic sites in Lucca, Italy. The 14’ x 8’ x 6’ sculpture was built during a 5 week period in the Cavallerizza , an equestrian stable repurposed into an art studio. It was sited for the duration of the Biennale in front of San Frediano , a 12th century Byzantine church, and now haunts a tunnel within Lucca’s rampart walls.

The sculpture had to be built from cardboard material. It needed to be disassembled in sections for transport through narrow medieval streets, withstand unsupervised public interaction and rain and sun exposure, and respond to it’s site and the Biennale’s theme of “Borders and Boundaries”. Stutz utilized his roots building cardboard Mardi Gras parade sculptures in New Orleans, and his subsequent career as a public artist to design and build the work. A hoodie is an article of clothing that functions as shelter, an economic marker, a border and a personal boundary. The hoodie's connection to American issues of race and class leads viewers to consider the shooting deaths of Trayvon Martin and other black men. It also evokes migrants covering themselves for the perilous journey from East Africa across the Mediterranean Sea to Europe. By the end of 2016 over 5000 migrants had died at sea during this journey. The sculpture’s ambiguity, scale ,and symbolism are it’s strength. One could go inside the hollow sculpture, through a door in the back of the piece, to seek the shelter all humans crave, but in this case the door is closed.

The Biennale’s Italian director, Emiliano Galigani, and artistic director Nicolas Bertoux, invited the California based Stutz to participate in the exhibition and coordinated with him to assure he had the proper materials to build the sculpture in a short period. The Biennale crew was comprised of many people, from directors and production supervisors, to artists, stagehands, and student apprentices. A group of international and Italian artists made the exterior sculptures displayed in various sites throughout Lucca. Additionally the Biennale has an interior art gallery and design pavilion, all of which showcase work created from paper. The choice was made that Hoodie be displayed in front of San Frediano, the oldest church in Lucca, where viewers could interpret it in a variety of ways, sometimes thinking it was a monk wearing a habit. Yet Hoodie’s most dramatic environment is it’s current protected site deep within a vaulted, ancient rampart tunnel that cuts into the massive wall that surrounds the town. One must pass through a series of passageways before turning a corner to see the sculpture at the end of a long corridor. It is surprising, ominous, and endures despite its delicate material.

This hoodie is a shelter, an economic marker, a border and a personal boundary. I want people to be startled at the symbolism and also go inside the sculpture to seek the shelter all humans crave. Cardboard is often used for makeshift shelter. But in this case the door is closed. The Hoodie's connection to American issues of race and class is similar to that which Europe is experiencing with the Migrant crisis.