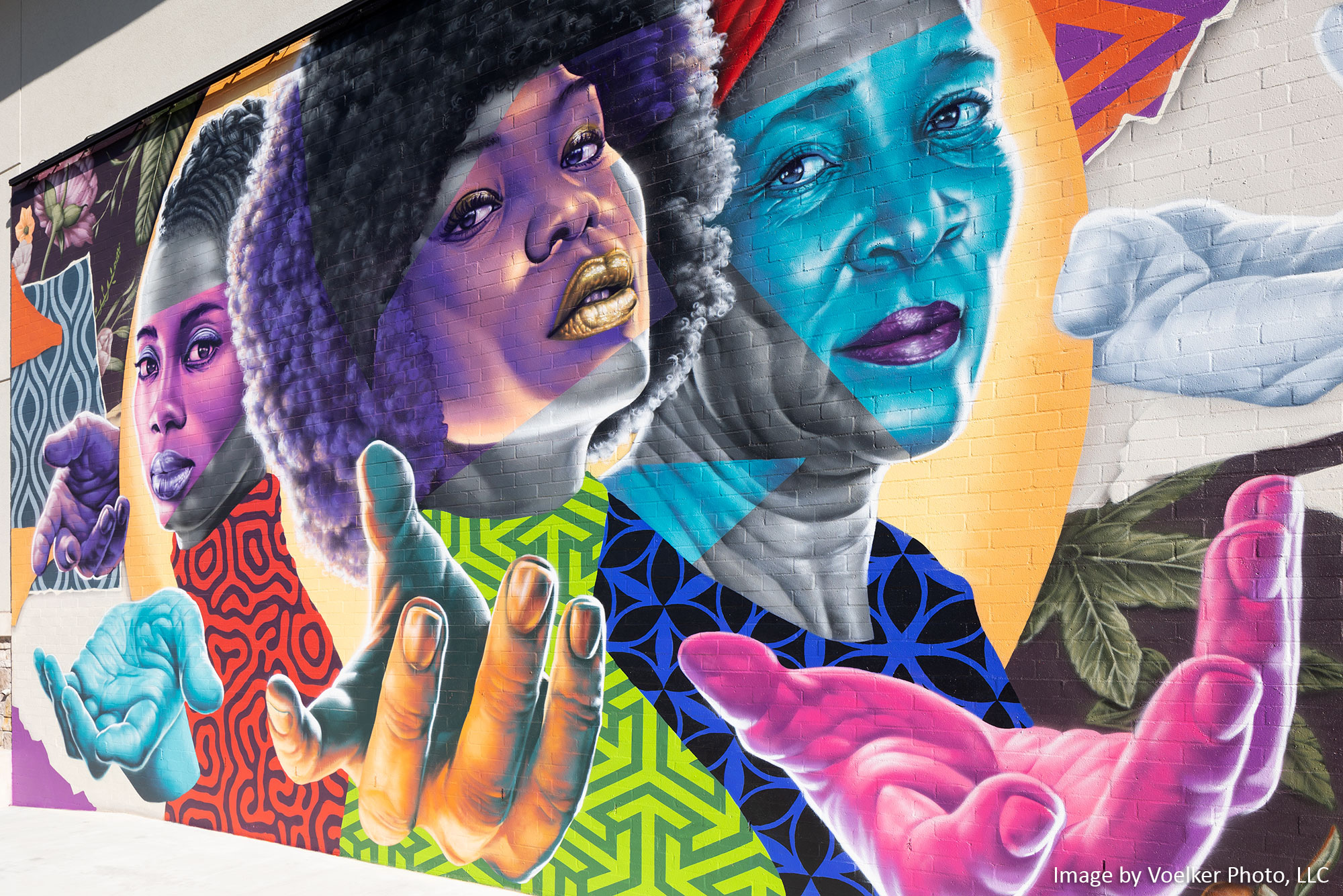 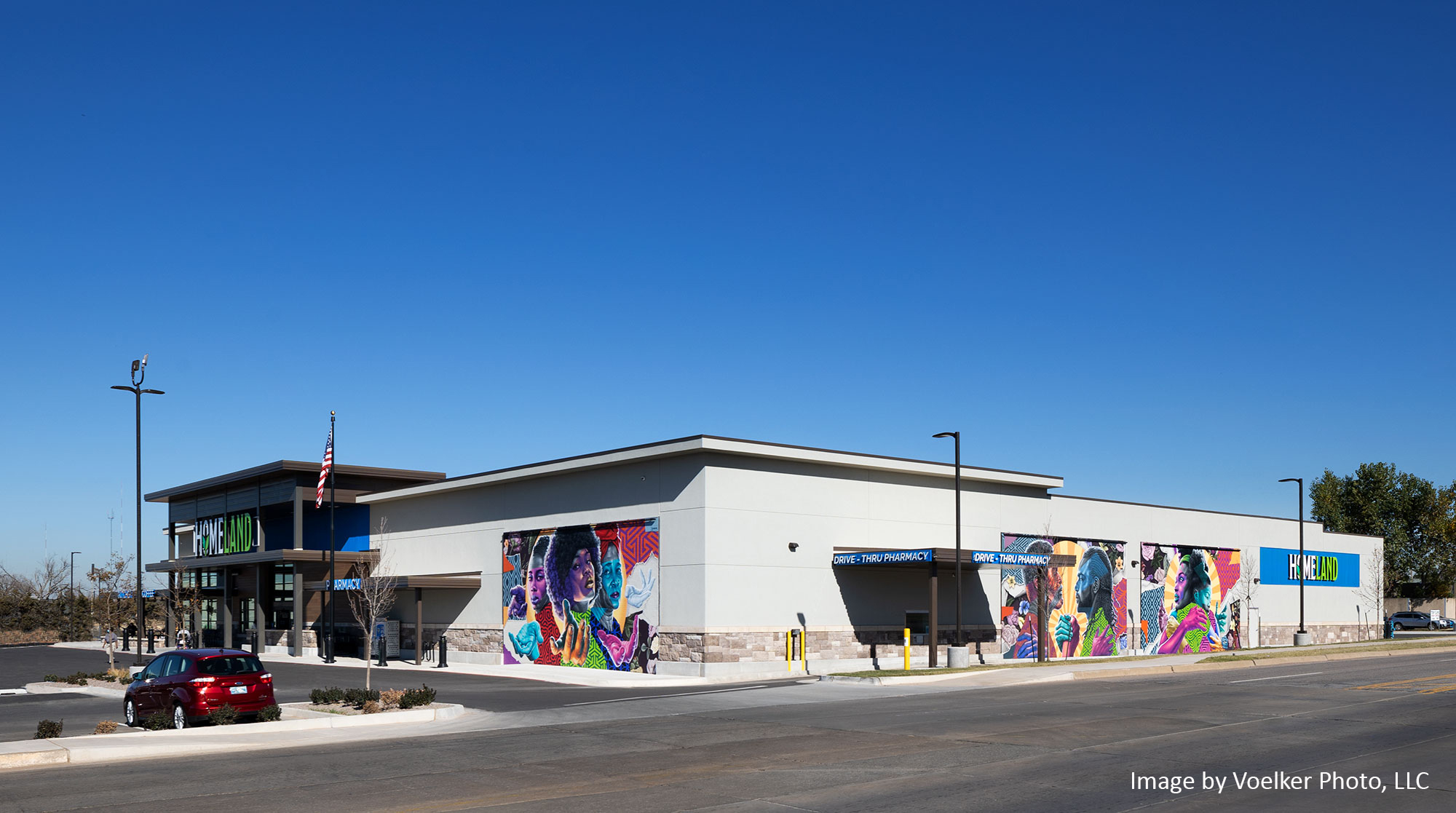 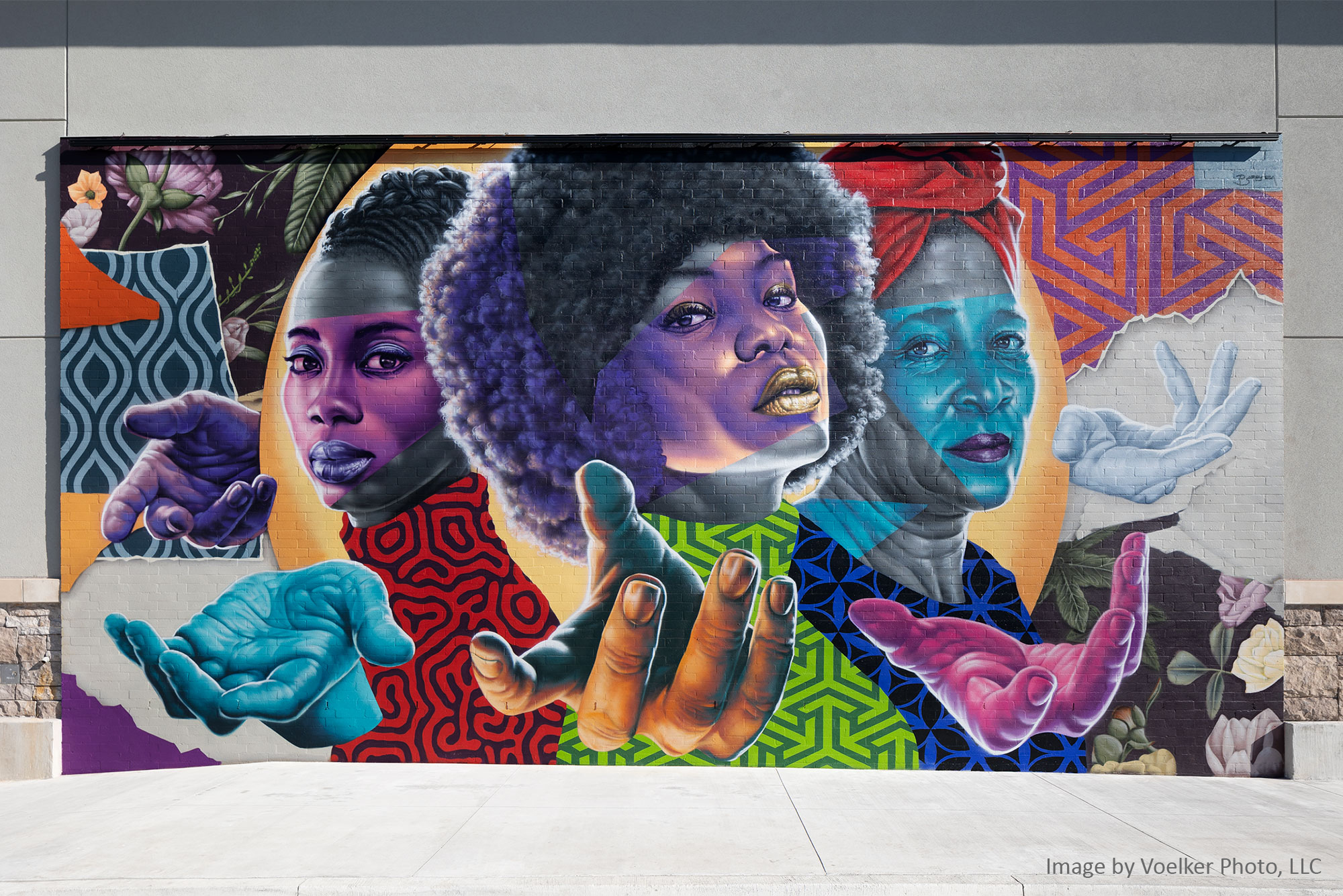 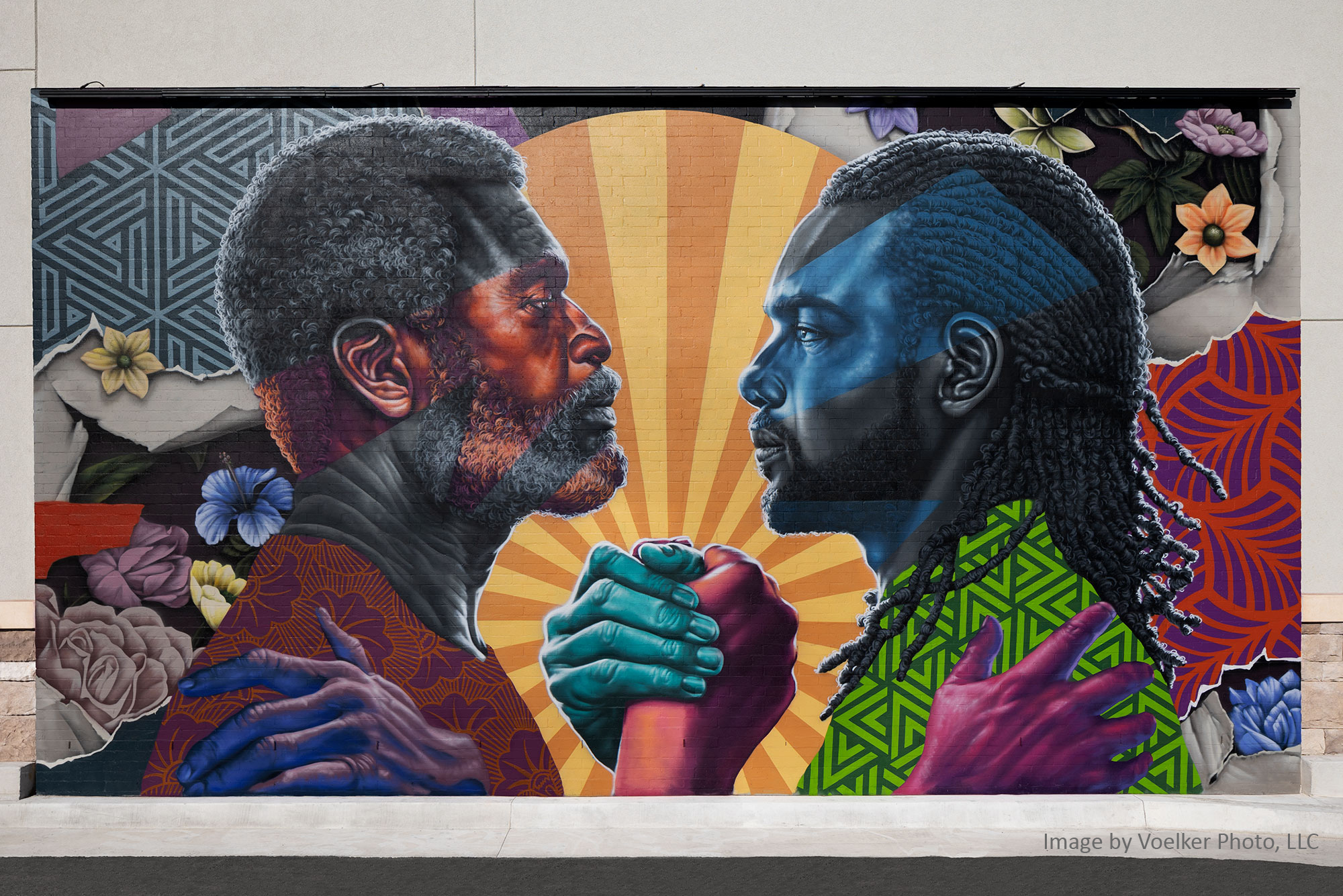 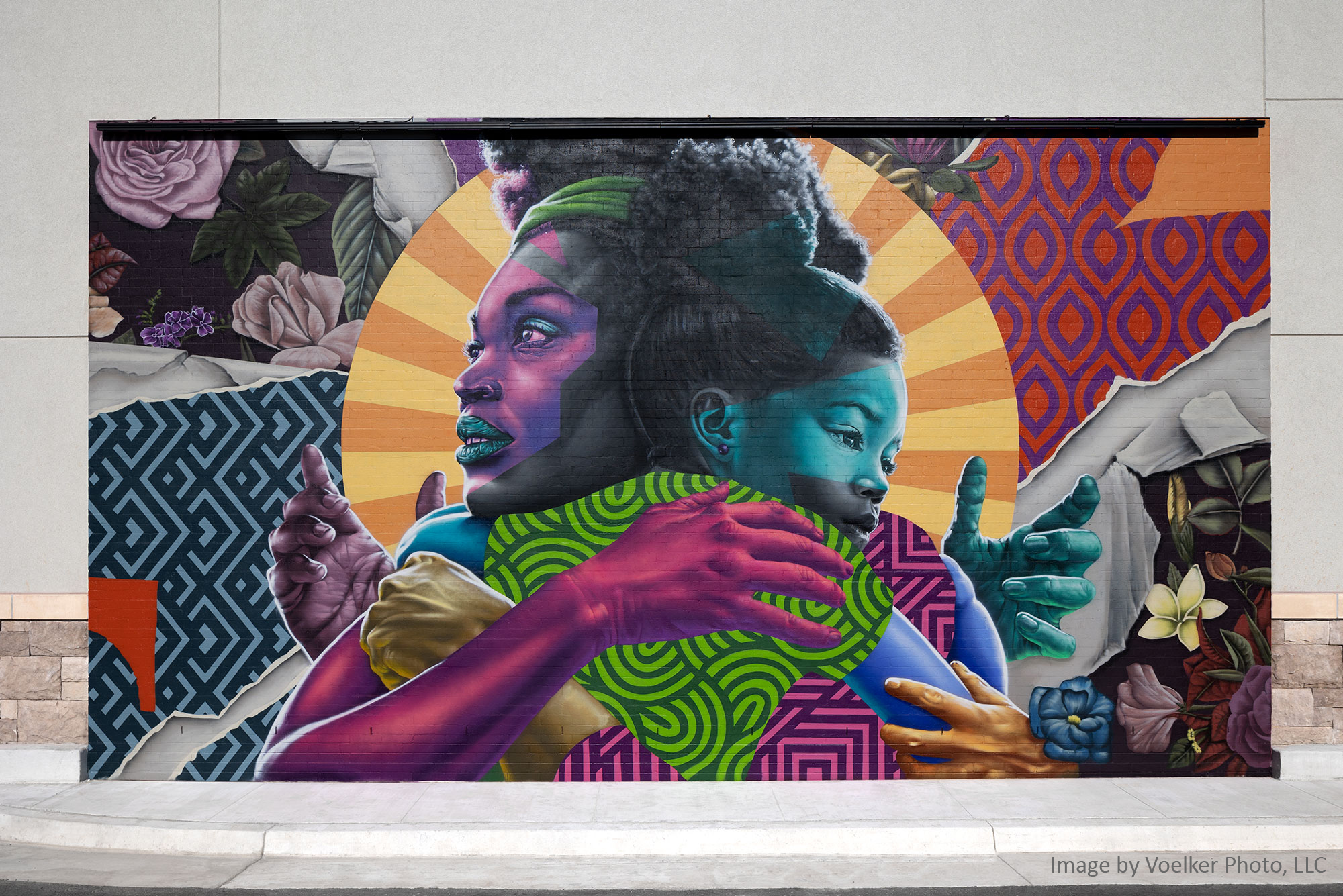 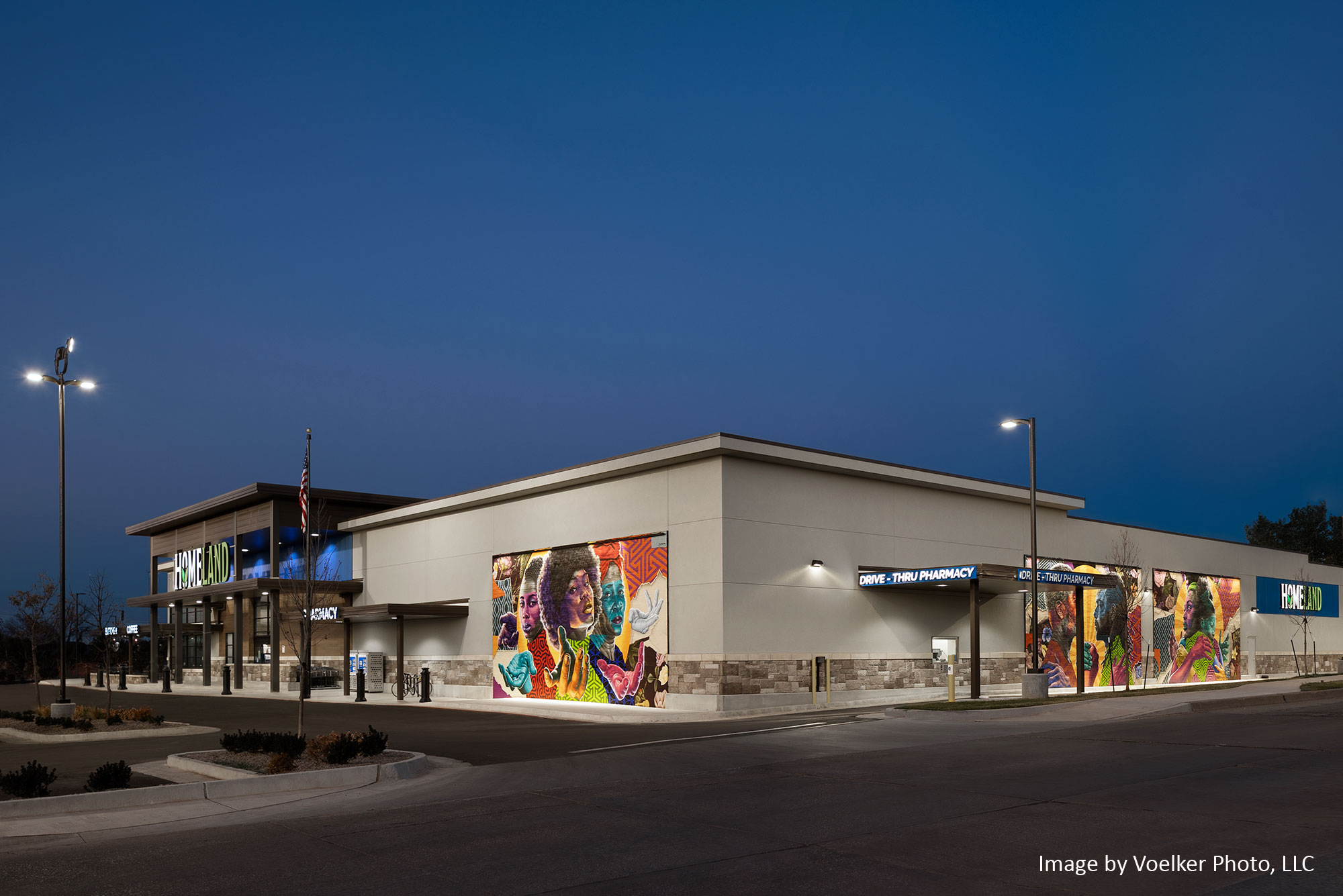 Client: The Alliance for Economic Development of Oklahoma City

“To see representation on the walls of a place that you’ve been waiting to see built for over two decades, it just brings it full circle,” said Nikki Nice, Oklahoma City councilwoman for Ward 7. The mural, titled “Home,” was painted by Yukon artist Carlos Barboza in conjunction with Manifold Creative Concepts and Creative Oversight Specialist Anton R. T. Morton. Morton said the work is an expression of sacrifice and intention by Barboza and the team designed to have a profound impact.

It took Barboza 36 days to paint the mural, but the process of bringing the art to life began almost a year prior. The Alliance for Economic Development of Oklahoma City commissioned the art and, in partnership with the city’s Office of Arts and Cultural Affairs, put together a committee representing all of the stakeholders involved. The $46,500 project was advertised to artists across the nation. “Home”, the resulting project, is a triptych, or three panels thematically connected, making it one of Oklahoma City’s largest murals and a major piece for Ward 7. Barboza describes the design elements as blending culture and family with the tumultuous parts of history to create a beautiful tapestry.

Create a series of artworks that spoke directly to the community while offering universal messaging to those from outside of the community. The statement of the triptych Home is, "When you find that comfort, support and protection surround you… you will have found home."

In January of 2021 the Alliance for Economic Development of Oklahoma City, Inc. in partnership with The City of Oklahoma City Office of Arts and Cultural Affairs announced a Request for Qualifications call to professional artists to submit their qualifications to be considered for a public art project to create three exterior painted murals for a new 30,000 sf Homeland grocery store on N. Lincoln Boulevard and NE 36th Street in Oklahoma City. In February, a selection committee made of an architectural design team member, neighborhood stakeholders, a representative from the Alliance for Economic Development, a corporate representative from Homeland a Public Arts Commissioner and Public Art Professional selected three creative teams to conceive and propose designs. Project presentations were reviewed by the selection committee and narrowed to two creative teams for final design presentations. Following the second-round presentations, Manifold Creative Concepts was selected to proceed in the commission of a public artwork for the selected site. Ensuing contracting, site preparation and minor revisions to the visual concept, the murals moved into physical production on October 11, 2021.

At the Homeland on Dec. 5, residents spoke of the significance of the art to the neighborhood. Gabrielle Butler, who spent her childhood going to church and having her hair done on the east side, watched as other areas of the city grew while that neighborhood was left behind. She eventually moved away and said being able to now share art with her children that depicts people like them "made-high" and "regal" is important. “There was nothing like this when I was growing up,” she said. “It’s going to be transformative for other kids growing up here, maybe they won’t want to leave.” Williams said having art like “Home” in the community will encourage ownership and involvement from people living there. He said when people see how something as simple as a work of art can begin the work of elevating the community, they buy in. Others, including Mary Sumo, saw the mural as a source of pride or representation of what the community had to offer. She said bringing her kids nieces and nephews to a place that celebrates diversity and people who look like them is meaningful. “It’s a very special opportunity,” Sumo said. “It’s the camaraderie that’s very special to me because I don’t get it everywhere, it’s the camaraderie that I didn’t really know that I needed.”