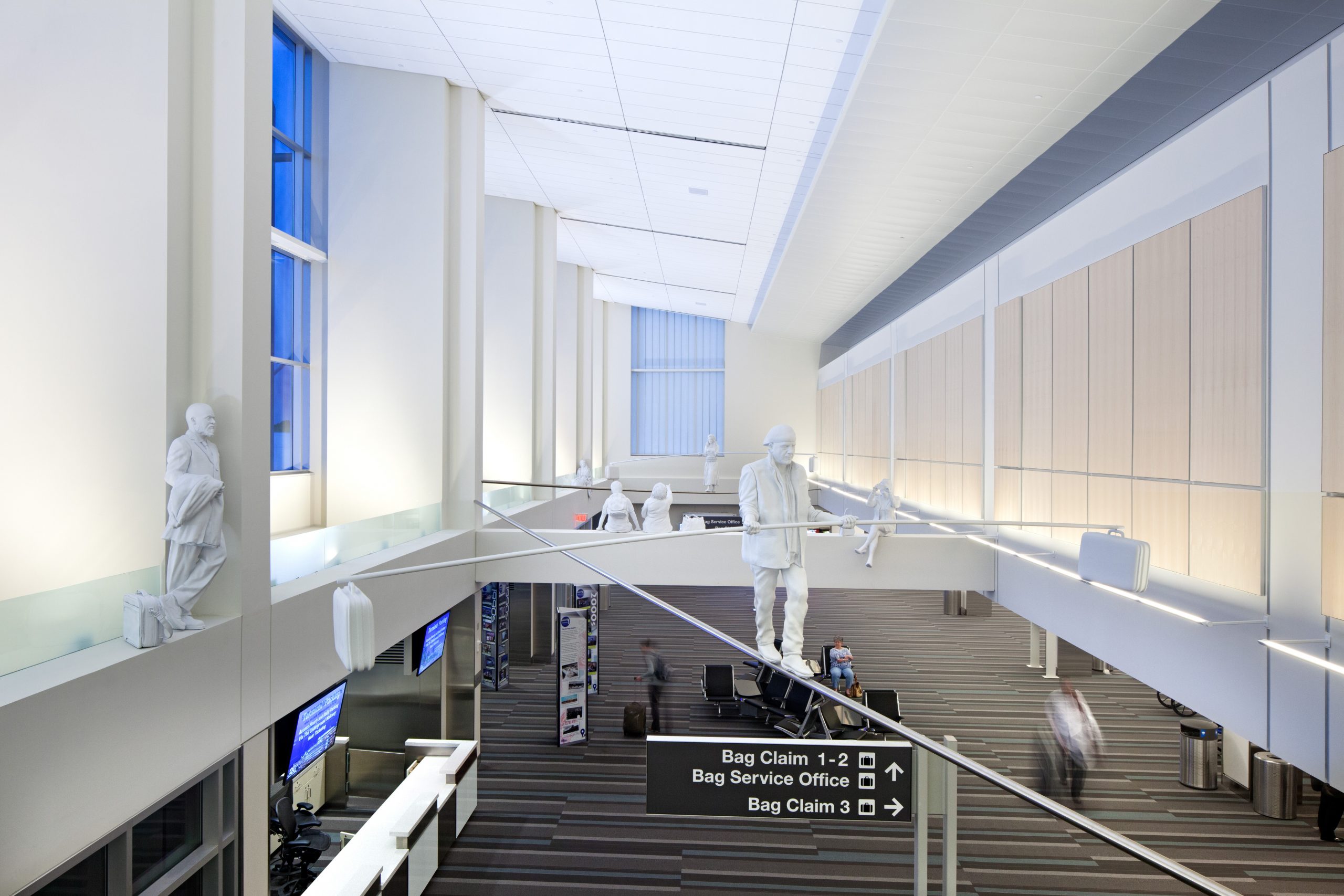 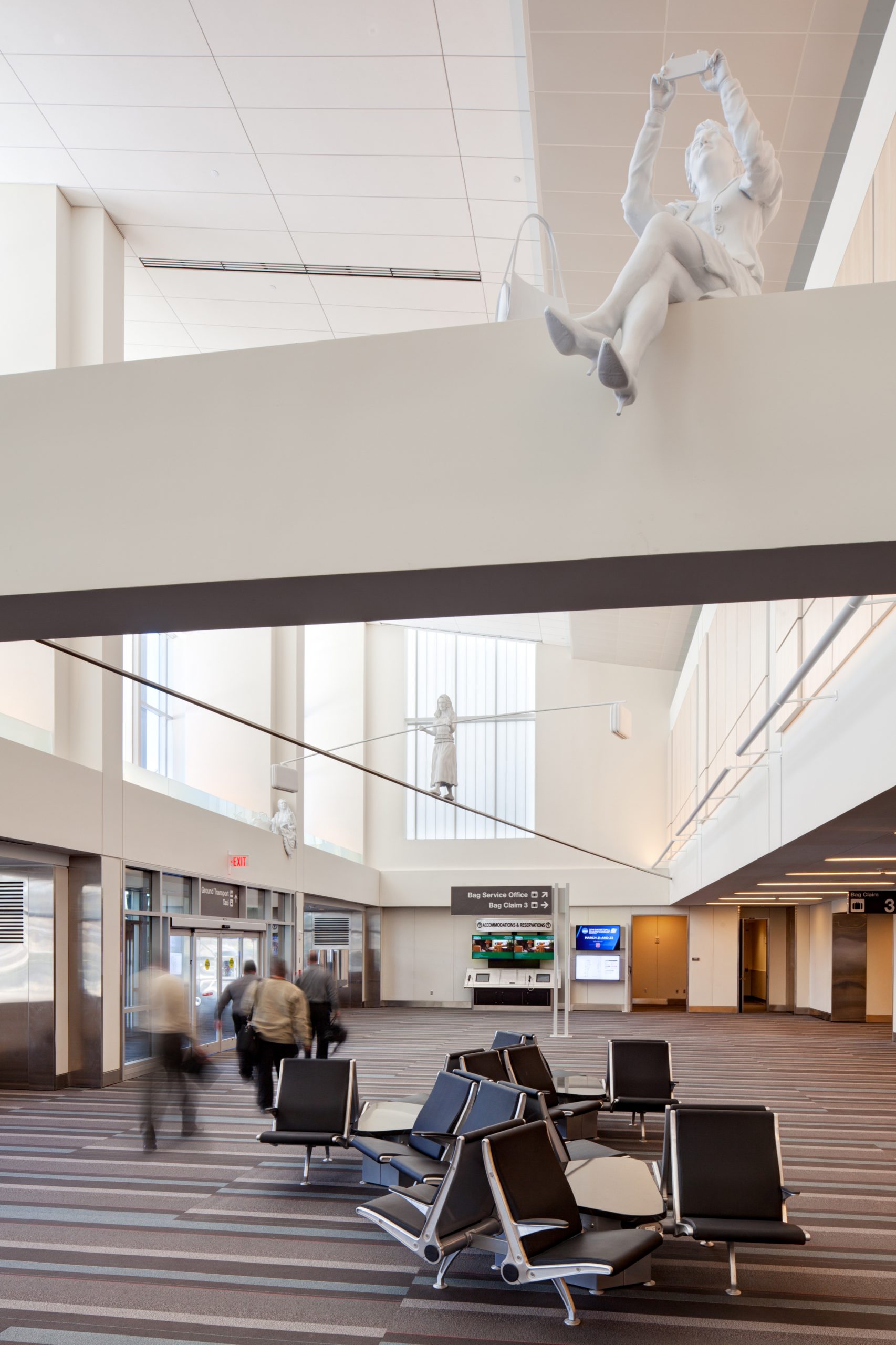 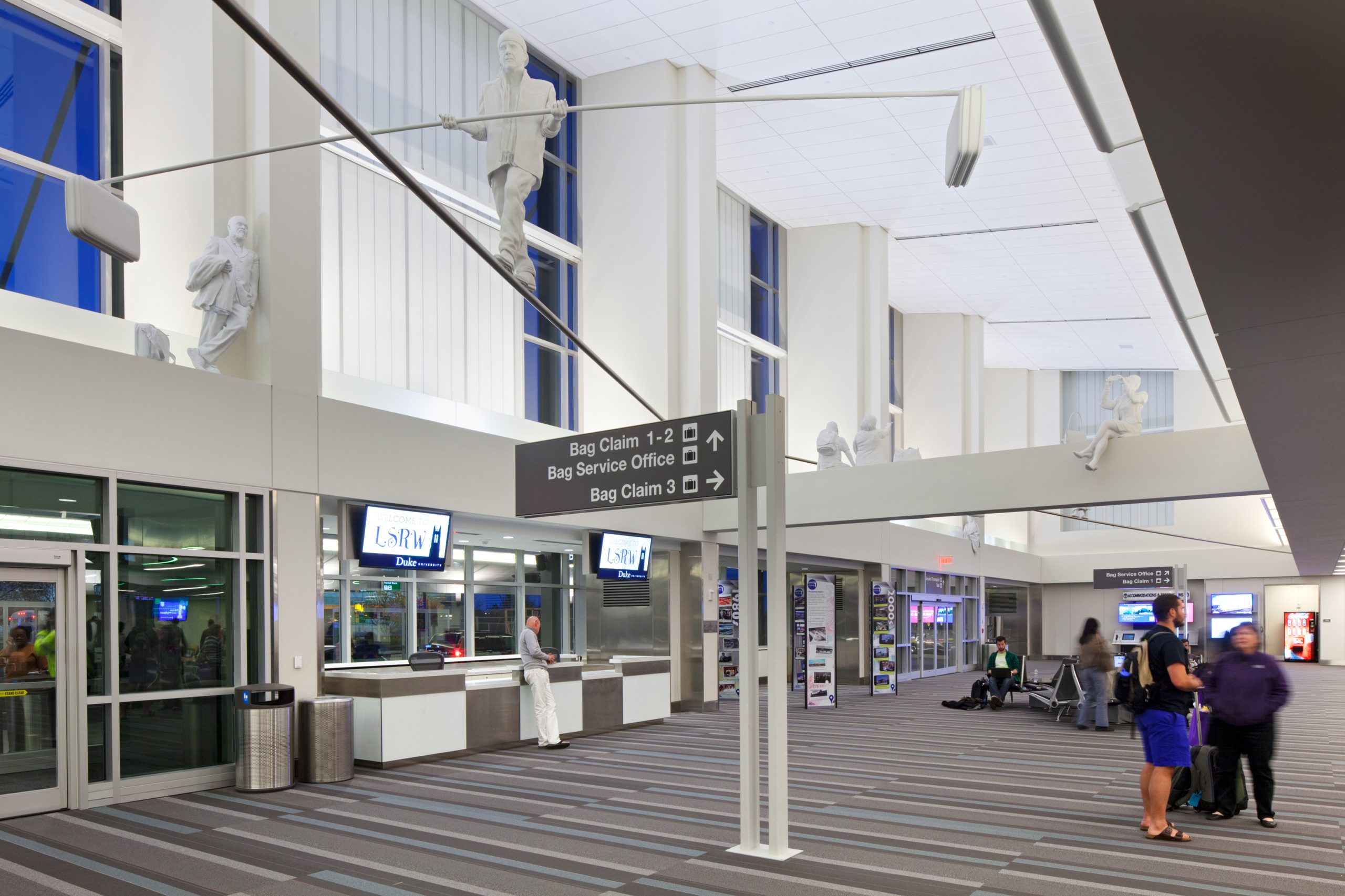 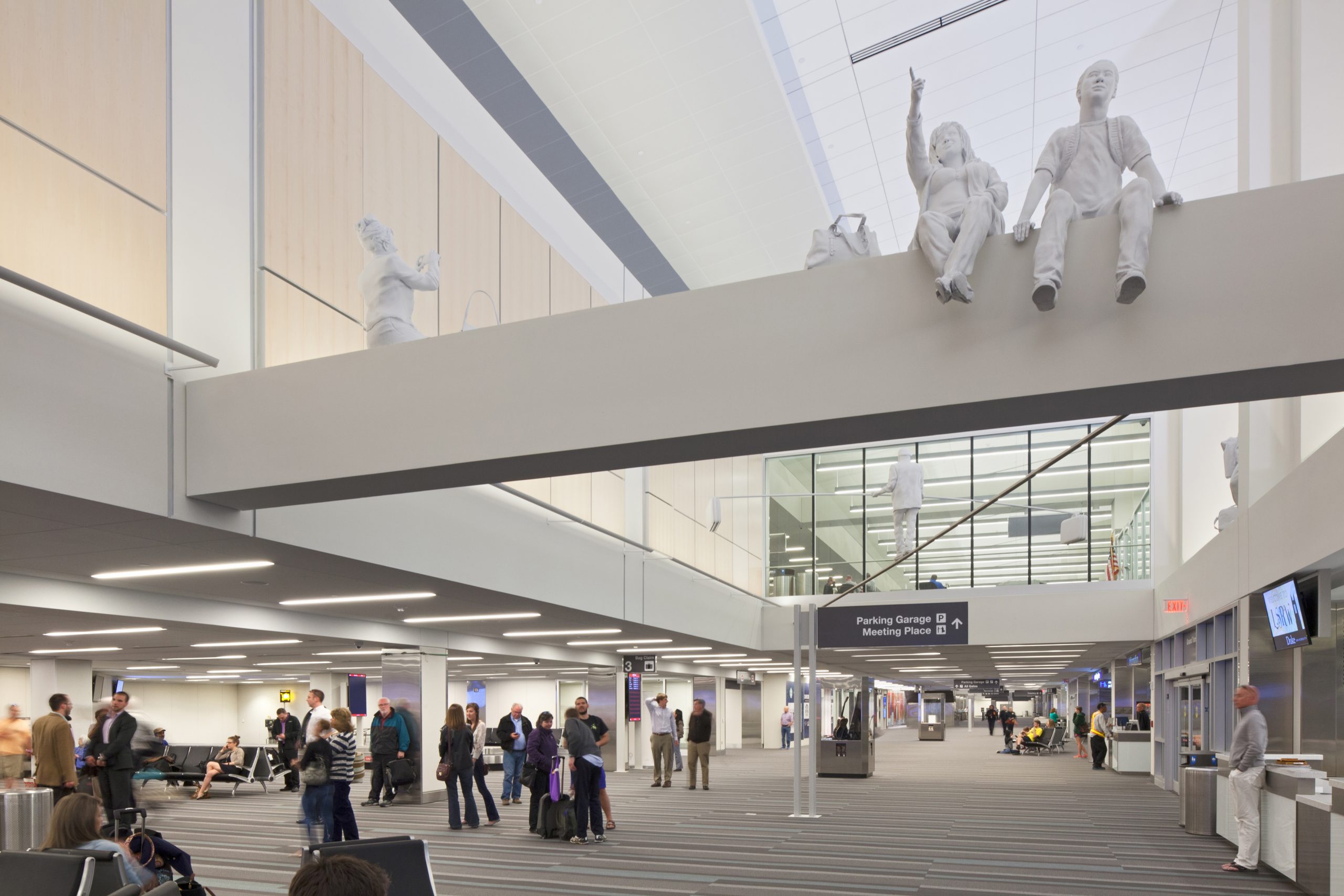 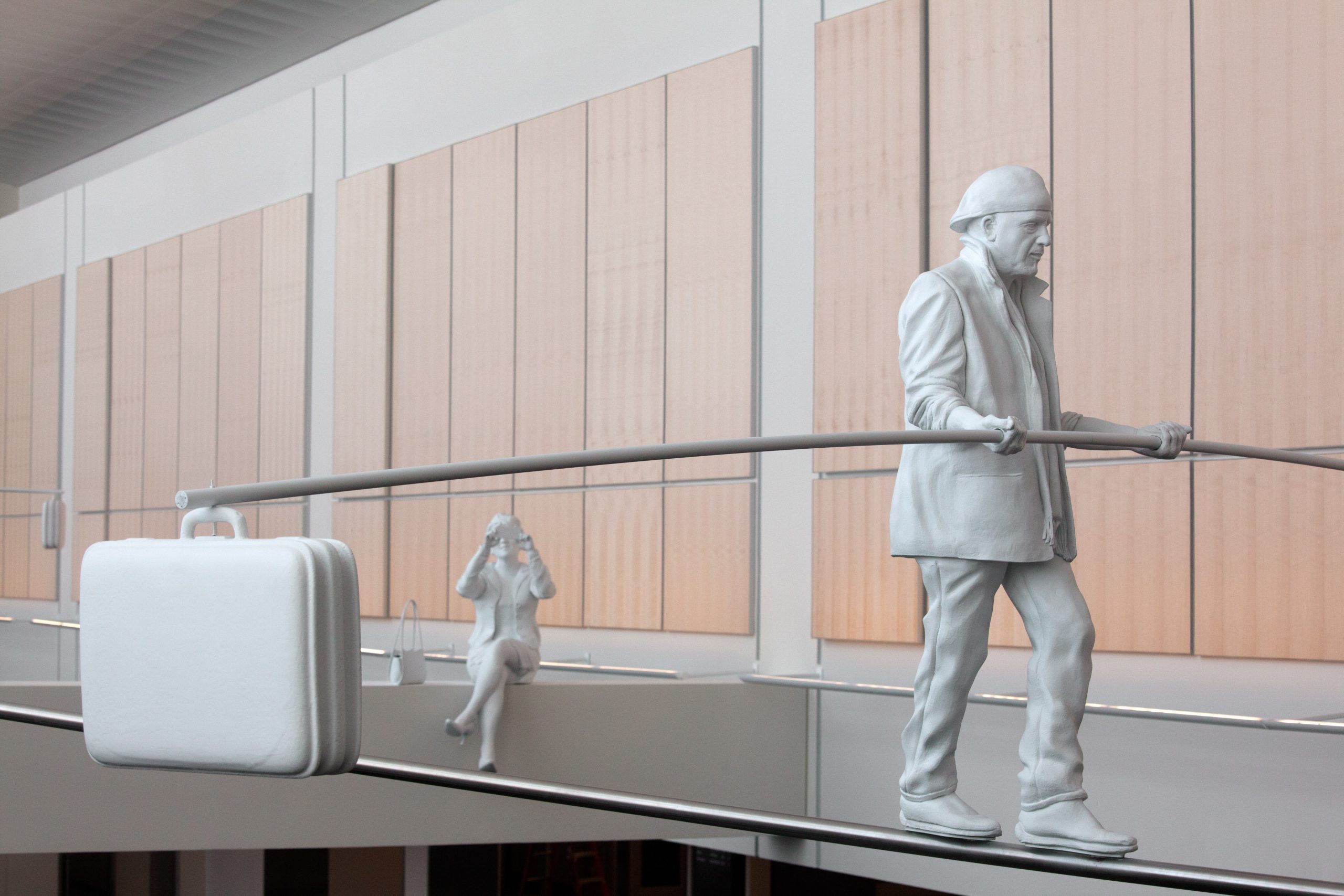 Huether created this art installation of seven, individual life-sized figures for the baggage claim area in the new Terminal 1 at RDU. It is made of stainless steel, high-density foam, Polyurethane Plastic, Latex Paint. Each live-sized figure varies according to the person, measuring between 5’2 and 6’2 H. ‘Highwire Travelers’ was featured in the April 2014 issue of CODA magazine, ‘Suspended In Space’.

The figures aim to provoke a sense of curiosity, surprise and whimsy and are designed to represent the many people using the airport on a daily basis. This installation, ultimately, is about the traveler and the journey we all undergo while navigating from one place to the next.

The artist anticipates an instant engagement between the travelers of the Raleigh Durham airport and the “art travelers”. The suitcases at the end of the balancing bars, held by those figures on the tightropes, create a visual connection to the baggage claim area. And the unexpectedness of encountering these figures and the unlikeliness of ‘people-like’ characters sitting and walking high above the baggage claim floor, undoubtedly, will evoke a touch of humor and light-heartedness. The off-white color of the figures purposefully complements the light and airy aesthetic of the space.

Each person posed for their portrait and was scanned with a digital 3D-scanner. Afterward, the digital information was sent to a CNC machine, which then carved the figures out of high-density foam. After the sections were assembled, a resin coating was applied to give the figures a smooth, hard finish and a latex pigment was then applied.

Gordon Huether and team worked closely with the Raleigh-Durham Airport Authority, from the early conceptual stages to the final installation. The artist was initially awarded a public art project for the Raleigh-Durham International Airport's new Terminal 1 in 2012, and, as is a very common practice, the artist developed several concepts before arriving at this final installation. The Airport Authority’s public art committee’s goal was to fill the space with artwork that engages airport visitors and spark a positive reaction. The monochromatic palette also speaks to an ethnic cross-section of humanity: that is, we are all the same, all equal and essentially, all “color blind”.

The project scope and artwork space was a definite challenge, which Huether solved with this very elegant and engaging installation. The commissioned artist was asked to follow strict parameters: None of the artwork elements could be placed on ground level, the installation cannot be directly suspended from the ceiling or mounted on any of the surrounding walls. The installation is designed in such a way that passengers departing through security as well as passengers arriving through baggage claim can experience and engage with the art.

Each figure has a personal connection to the artist. On the tight rope is the artist himself, a self-portrait; his daughter, Erika, on the other tightrope; Darcy Sue, his significant other, is taking a picture; Warren, standing back and watching Gordon, is a musician and friend of the studio; Brian, with the backpack, owns a nail salon and is sitting next to Ivory, who is the wife of the artist’s favorite bartender; and finally, Christina, who is reading a book and is a valued member of the Gordon Huether Studio team.