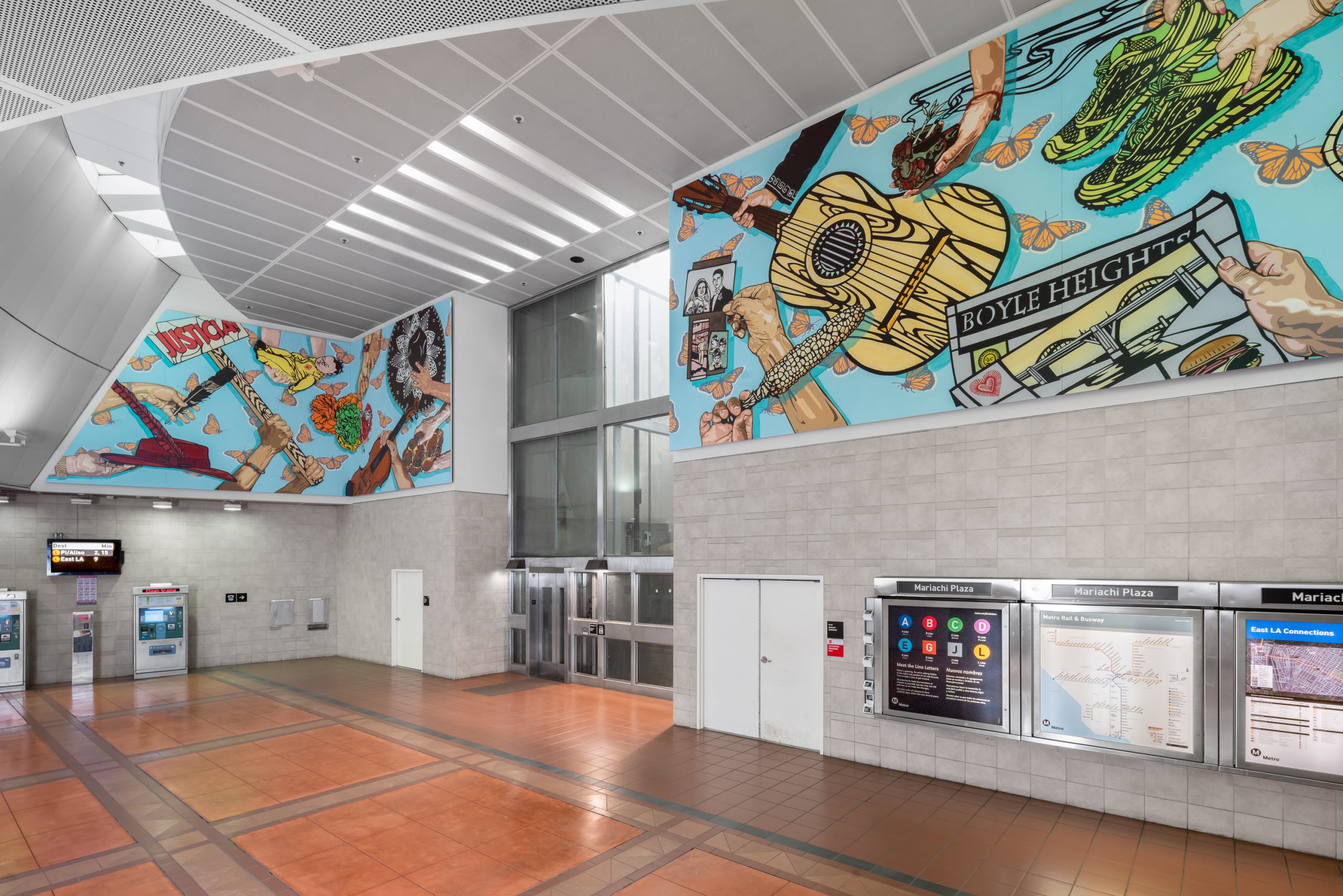 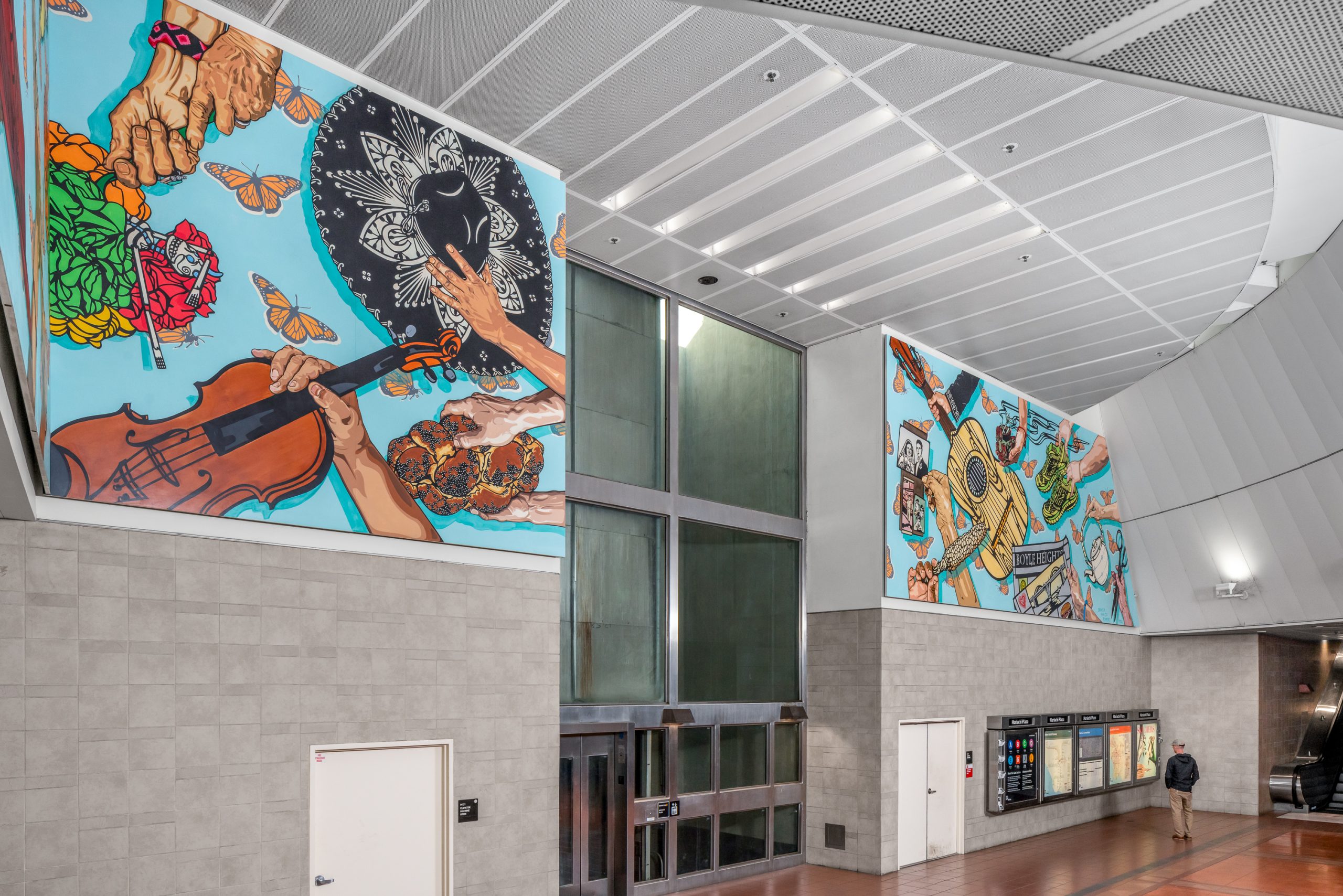 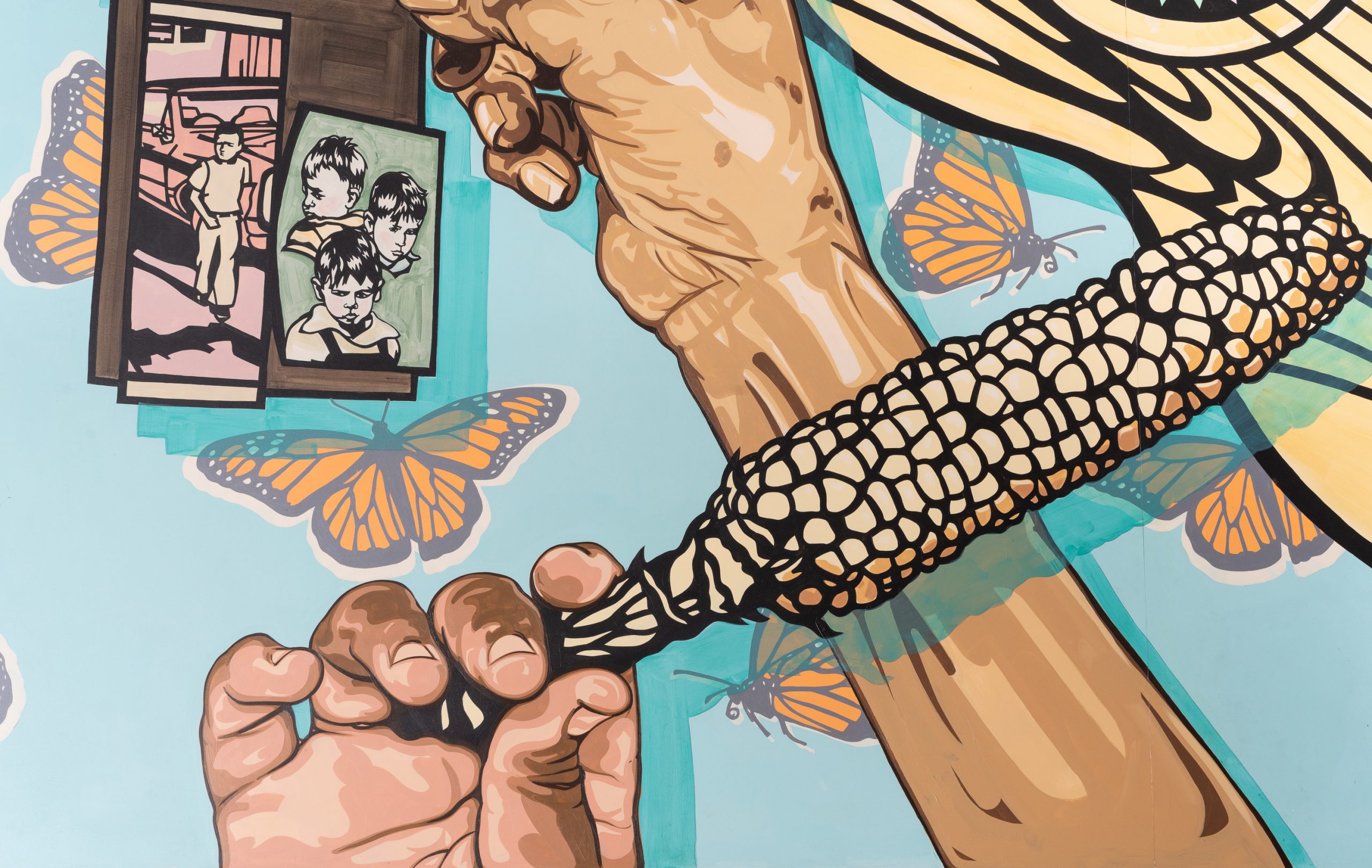 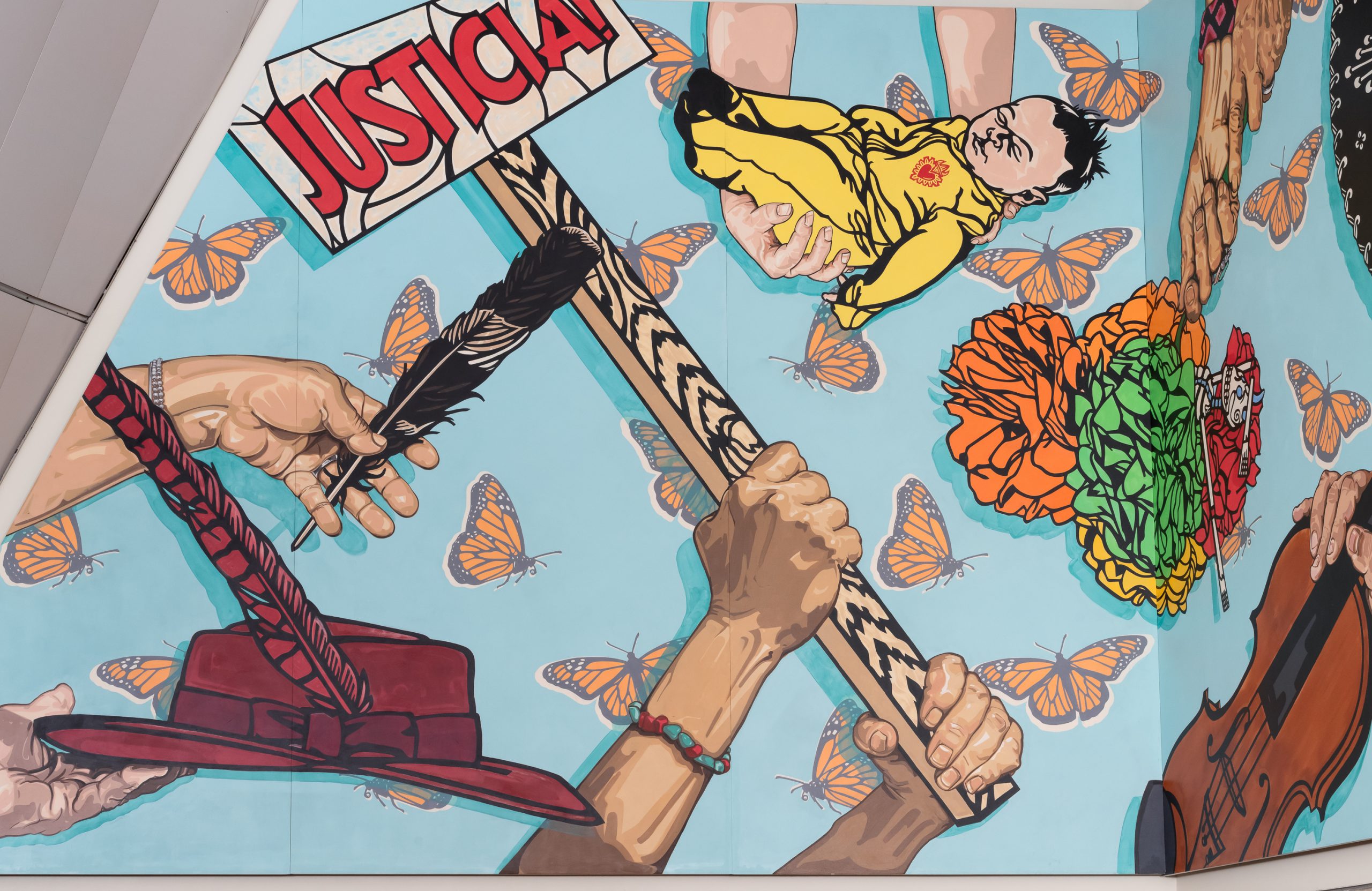 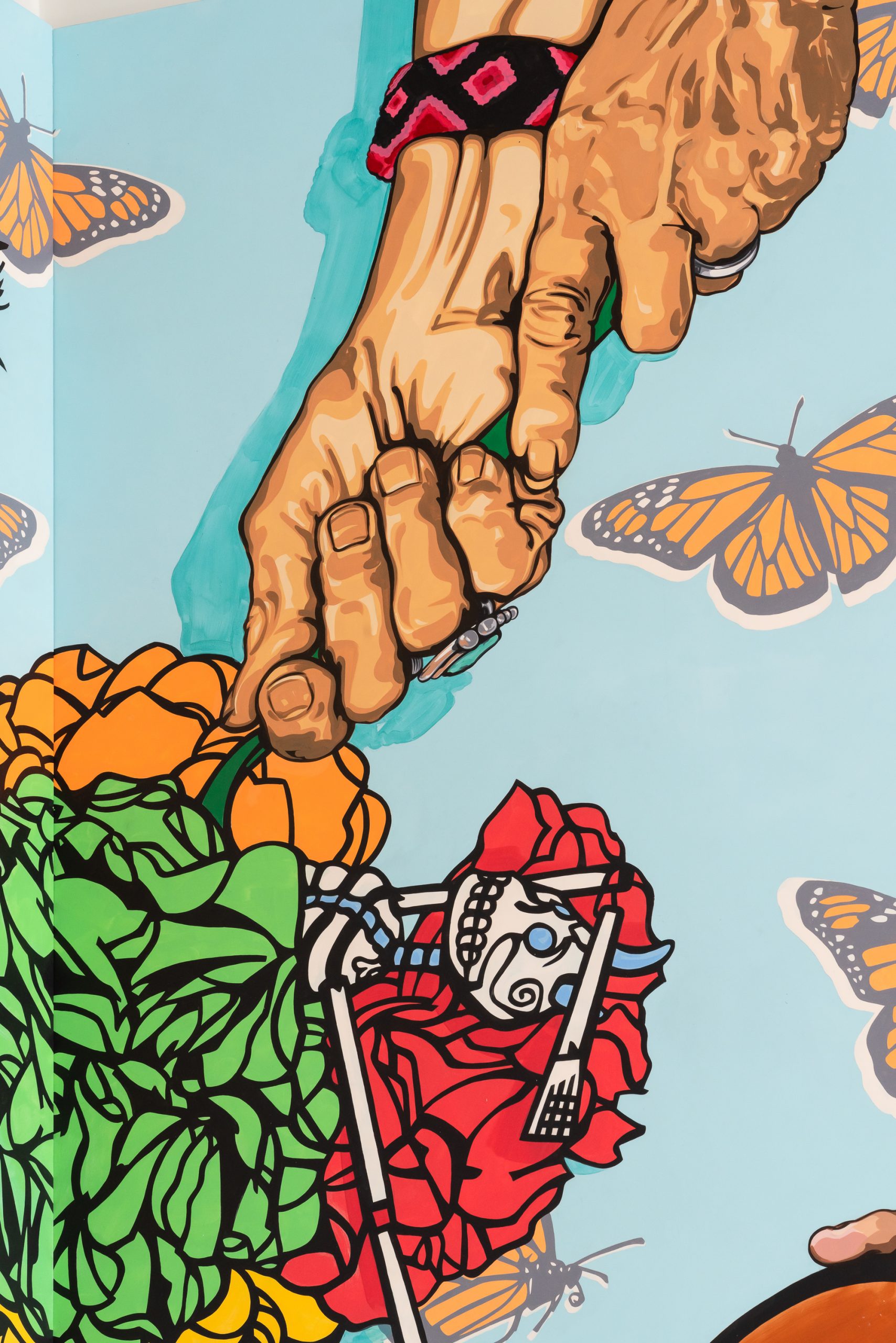 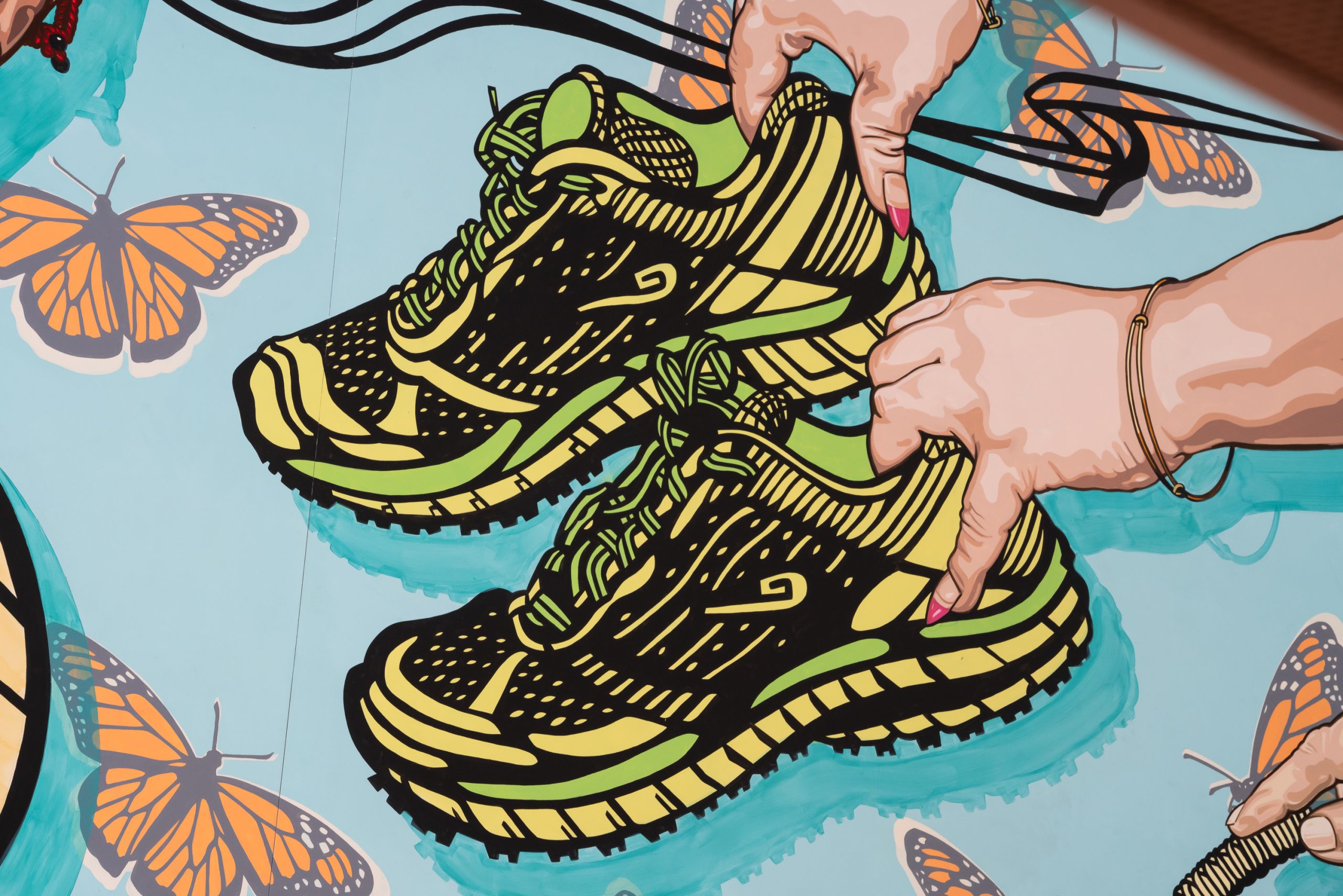 Hecho a Mano is a contemporary Chicanx mural in the Mariachi Plaza Metro Station in Boyle Heights, Los Angeles by artist Sonia Romero. The mural is hand painted with acrylic paint on aluminum panels, 12 feet high and 64 feet long and is located underground in the mezzanine level of the station. The bottom of the mural is 10 feet from the floor and the mural is located on both sides of the elevator shaft.
Romero is a second-generation muralist and wanted to honor and continue the tradition of Chicanx muralism with this piece, while adding her own contemporary design flair. The mural depicts the hands of community members holding objects of significance that represent the people of Boyle Heights, past and present. Romero mixes her papercut derived line work (objects and butterfly background) with a more painterly approach (hands) to create her own unique style.

This mural was commissioned 6 years after the completion of the Mariachi Plaza Metro station, in order to enliven a dark space and welcome passengers to Mariachi Plaza, which traditionally hosts Mariachi musicians who are waiting to be hired for gigs.
Hand painted murals are historically significant to the Mexican American community, which is currently being threatened with gentrification. The medium was chosen to honor and continue this tradition, and to acknowledge and respect the local community.

Sonia Romero was the designer and painter of this mural, and Jennifer Lieu was the project manager from Metro. Angelene Campuzano from Metro designed the aluminum panels which were fabricated at Standard Sculpture and delivered to the artist. It took several years to commission and fabricate the panels, and another year for the artist to paint it.
The mural was painted in the artist’s studio two panels at a time, and a team of men was required to swap out the 200 pound panels 8 different times. A construction company was hired to pick up and install the panels in 2020.
In order to engage the community, Romero held three open call photo shoots which invited people from the neighborhood to bring in objects they felt represented themselves or the neighborhood. Romero photographed these objects in the hands of the people that brought them, and these photos were used as references for the mural.

Sonia Romero weaves a narrative about Boyle Heights past and present, using portraits of hands and 16 significant objects. These objects pay tribute to Mariachi music and performance, community solidarity, Boyle Heights history and future generations. She chose objects that represent the Mexican American community, as well as the historic Japanese and Jewish communities. The background of the mural is a nod to Mexican oilcloth, featuring a monarch butterfly which is popular symbol of migration and immigration. Romero manages to represent contemporary Los Angeles painting and design, as well as honoring her Chicanx background and the tradition of muralism.