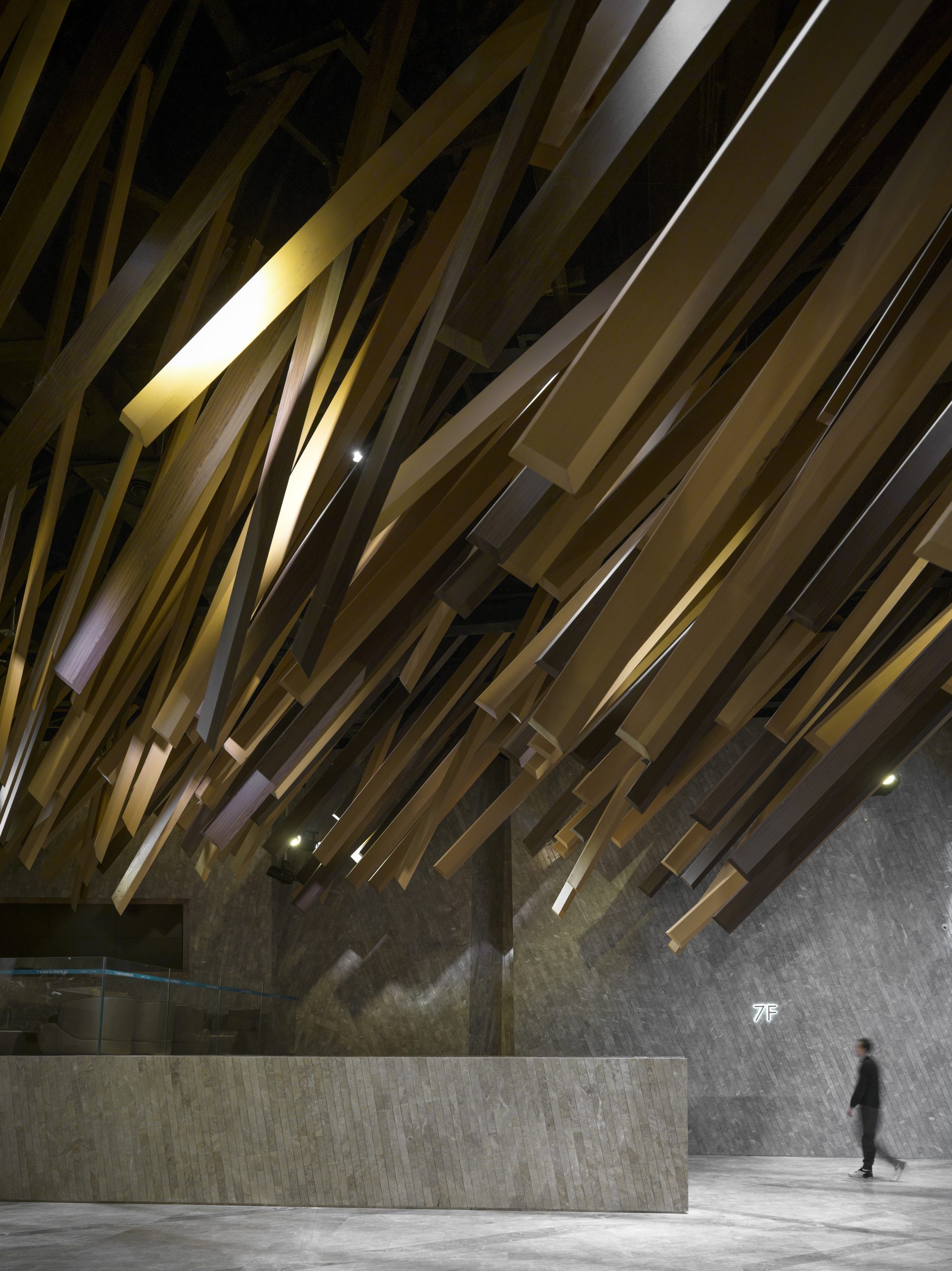 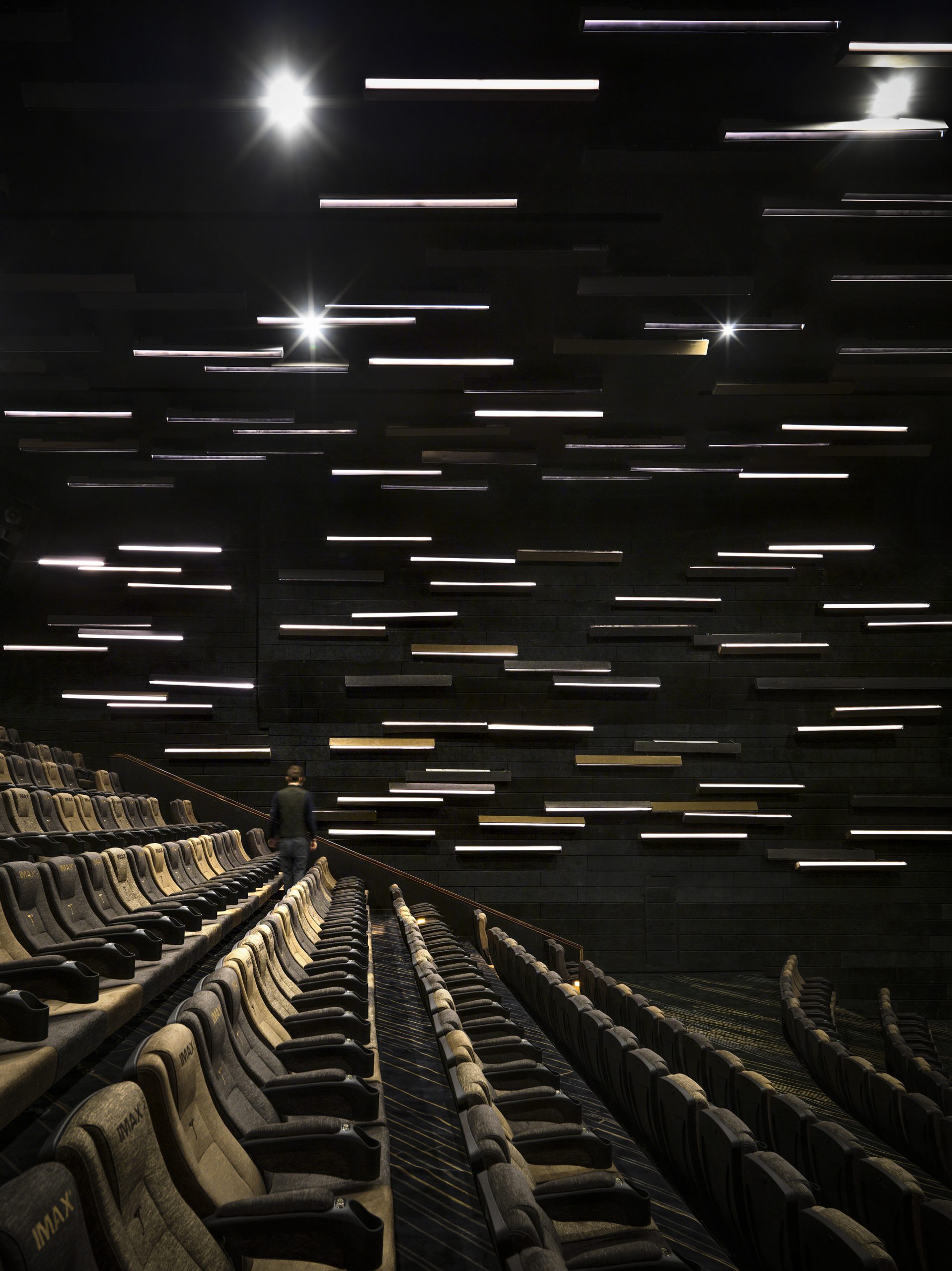 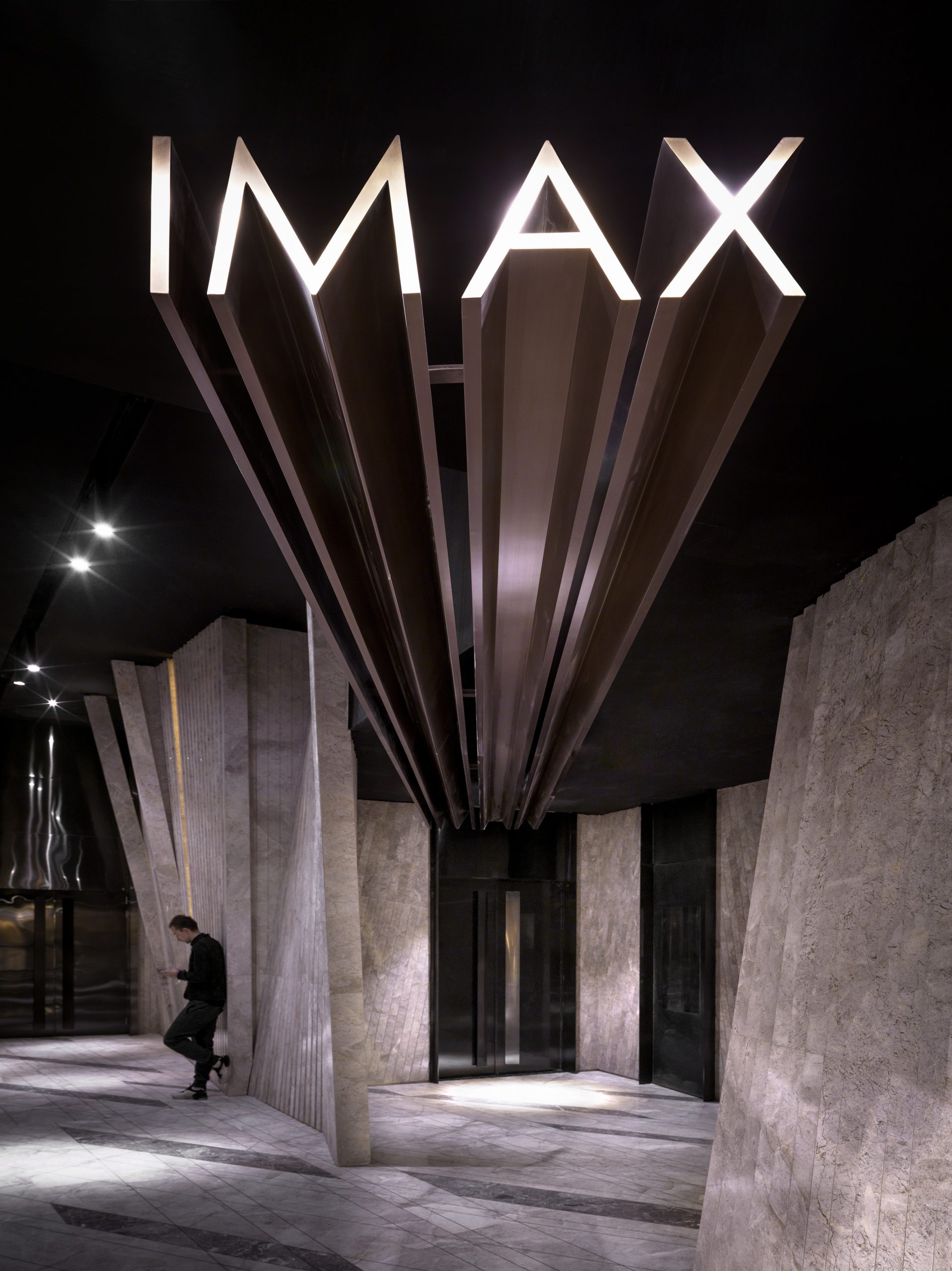 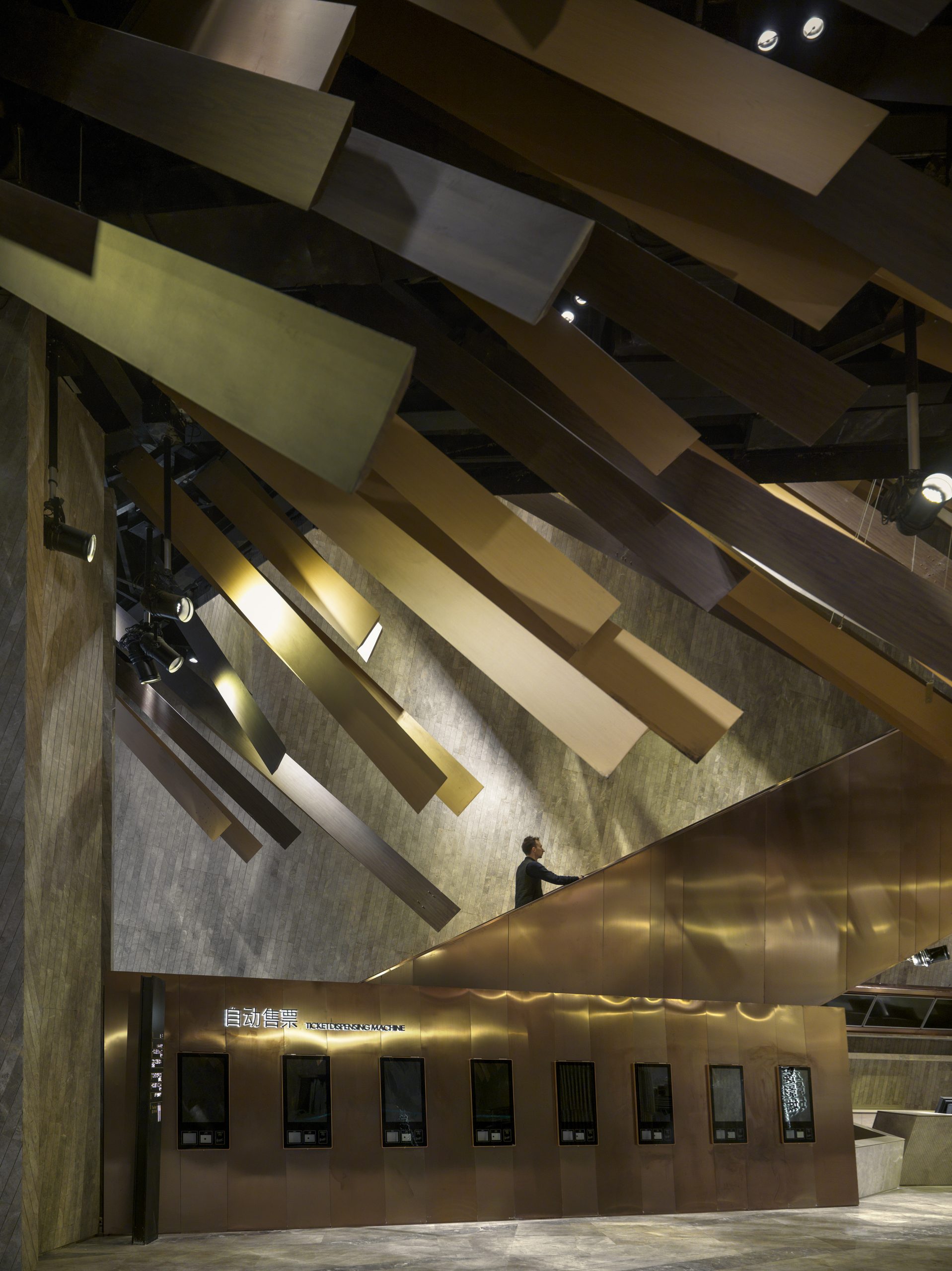 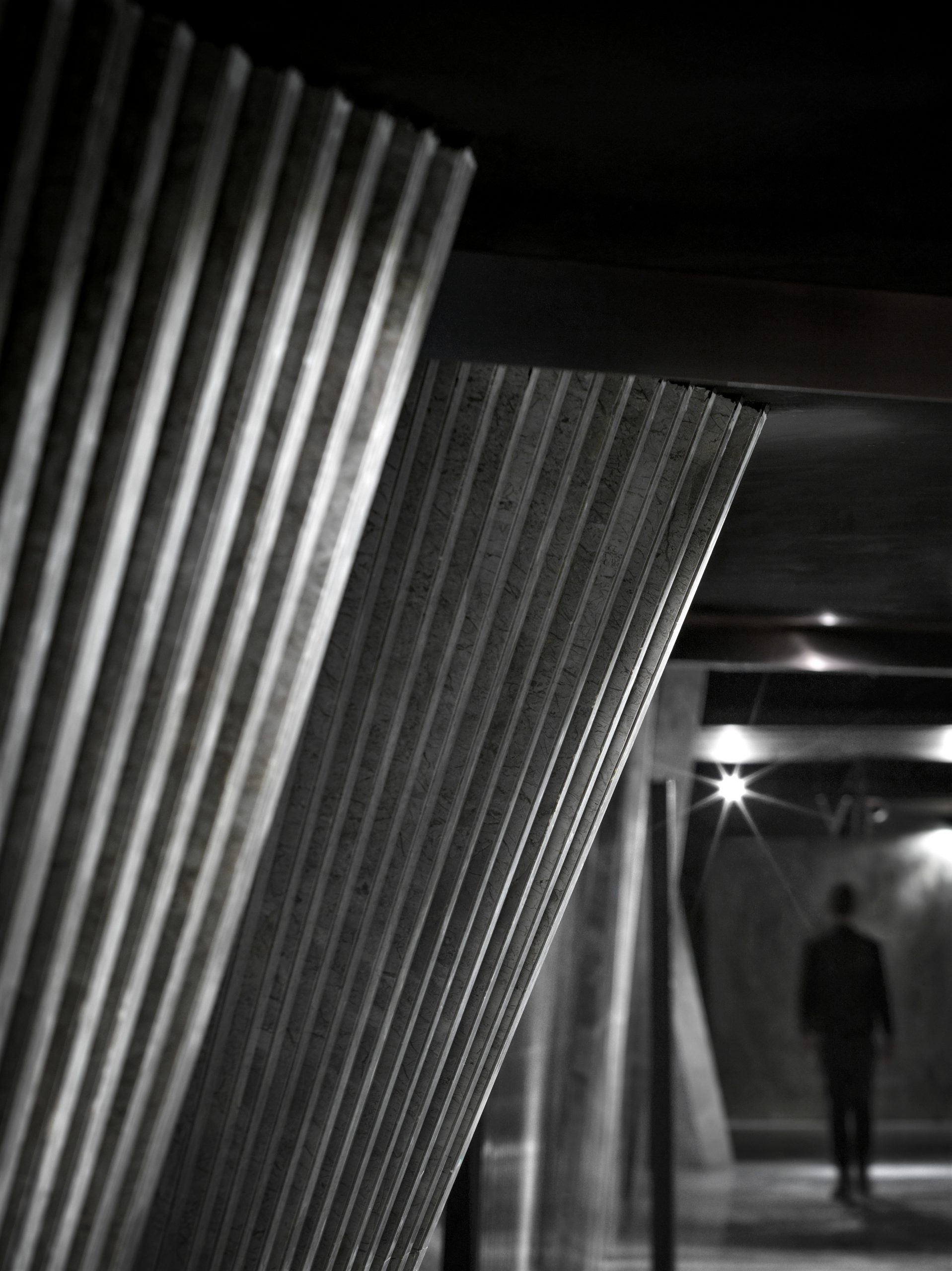 ONE PLUS PARTNERSHIP LIMTIED

Meteor is a shortlived but beautiful astronomical observation, reminding the audience of filmmakers’ years of hard work behind their enjoyment.

In the lobby, long rectangular-cuboid decorations extend from the ceiling, mimicking the motion of a meteor shower streaking through the sky. The cuboids point at two directions to enhance the 3D vibrant atmosphere, and the edges are slanted to create an illusion of speed.

Meteor shower is transformed into flat rectangular shaped-stones in the corridor, which look as if they are growing from the ground. Meteor shower is portrayed in a unique way in each auditorium to surprise the audience.

In this project, we did not integrate any commission artwork. Instead, we believe the by designing our own feature, furniture, lighting, the space is already very rich and can portray the concept behind the design. The size, location, and direction of each decoration were carefully designed, ensuring that it portrays the designers’ message in the best way. The space itself is an art piece.

The process of filmmaking reminds the designers of Meteor. A movie takes years to complete, comprising of the hard work of filmmakers. The designers want to pay tribute to the filmmakers through the design, to remind the audience of the passion and effort these people have cultivated into their relatively short-lived enjoyment.

The designers installed long rectangular cuboids as ceiling feature, mimicking the motion of a meteor shower streaking through the night sky. As there are a lot of cuboids, all pointing downwards with a sharp edge, it would be too heavy and intimidating if plain color is applied. At last, aluminium plates were used, with special treatment to add wooden patterns on top. Not only does the meteor shower look more 3D and realistic, it is also warmer and more humane.

As our client is one of the biggest cinema companies in Mainland China, they wanted a grand and elegant cinema that matches their brand image. This design creates a great impact on the audience as they enter the lobby, where they will continue to be amazed as they walk through the corridors into the auditoriums, and even when they use the washroom. The entire space creates a complete viewing experience for the audience. The cinema is also a breakthrough of the client’s existing cinema designs, which plays a significant role in bringing a brand-new image to their cinemas.

A great challenge in the project was the difference of ceiling height, the ceiling was 5-meter and 8-meter high in different parts of the lobby. It was hard to install the ceiling feature due to this significant difference in the heights, and it was also challenging to make the ceiling look as if it is of uniform height. A metal structure was installed below the slab, which made it possible to install the aluminium ceiling feature at the same height. It was also useful in hiding the electrical wires, tubes, air-conditioner openings, everything undesirable to be visible to the customer.

The concept of meteor shower continues through the auditorium. The designers have created different portrayals of meteor shower, enabling the audience to have a new experience when they watch movie in different auditoriums. For example, rectangular decorations are installed on the wall to imitate shooting stars radiating in the night sky. In another auditorium, instead of going in a diagonal direction, the trails of the meteor shower are horizontal. There is another auditorium where regular seats are replaced by beds, enabling the audience to lie down comfortably and enjoy the meteor shower before the movie starts.