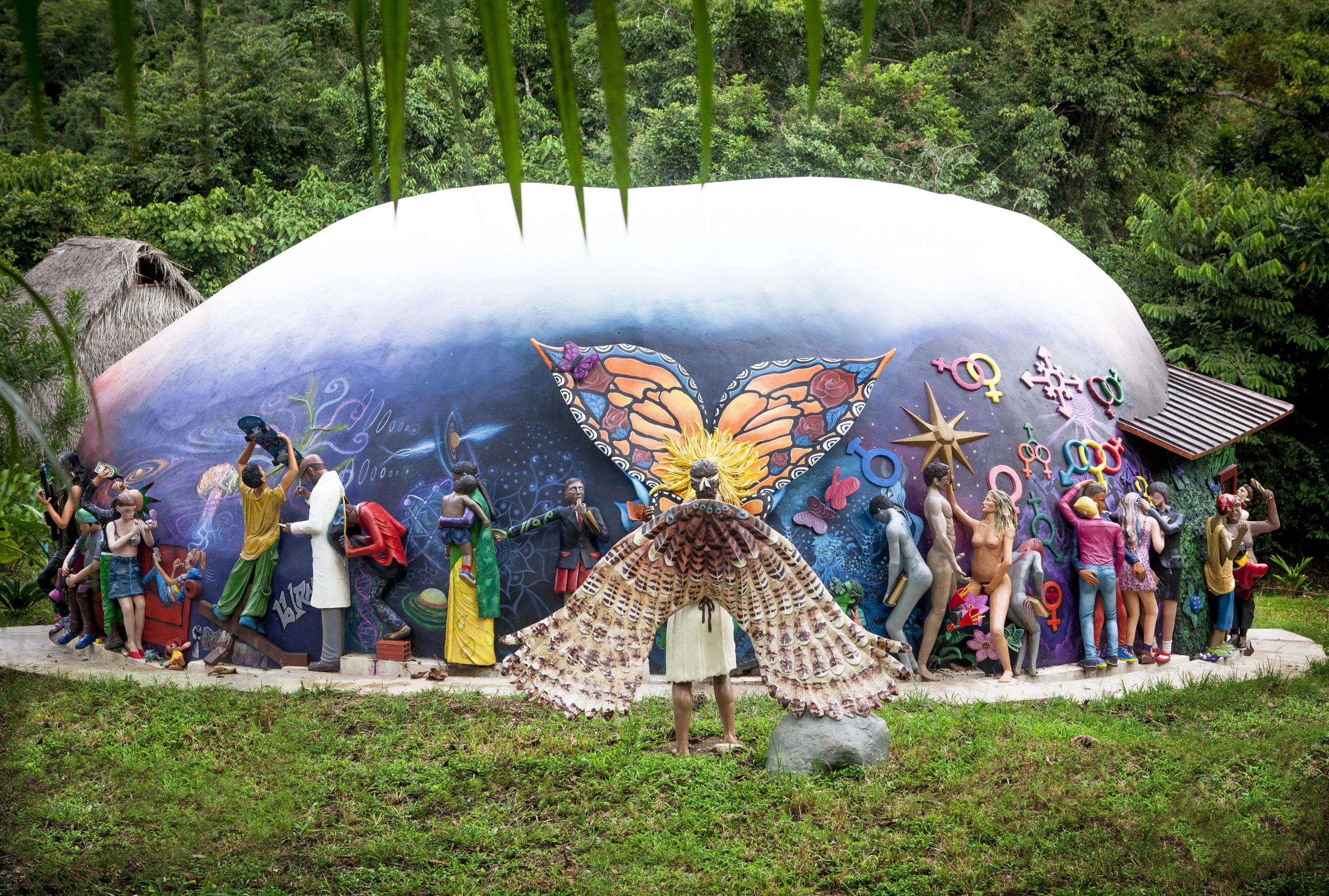 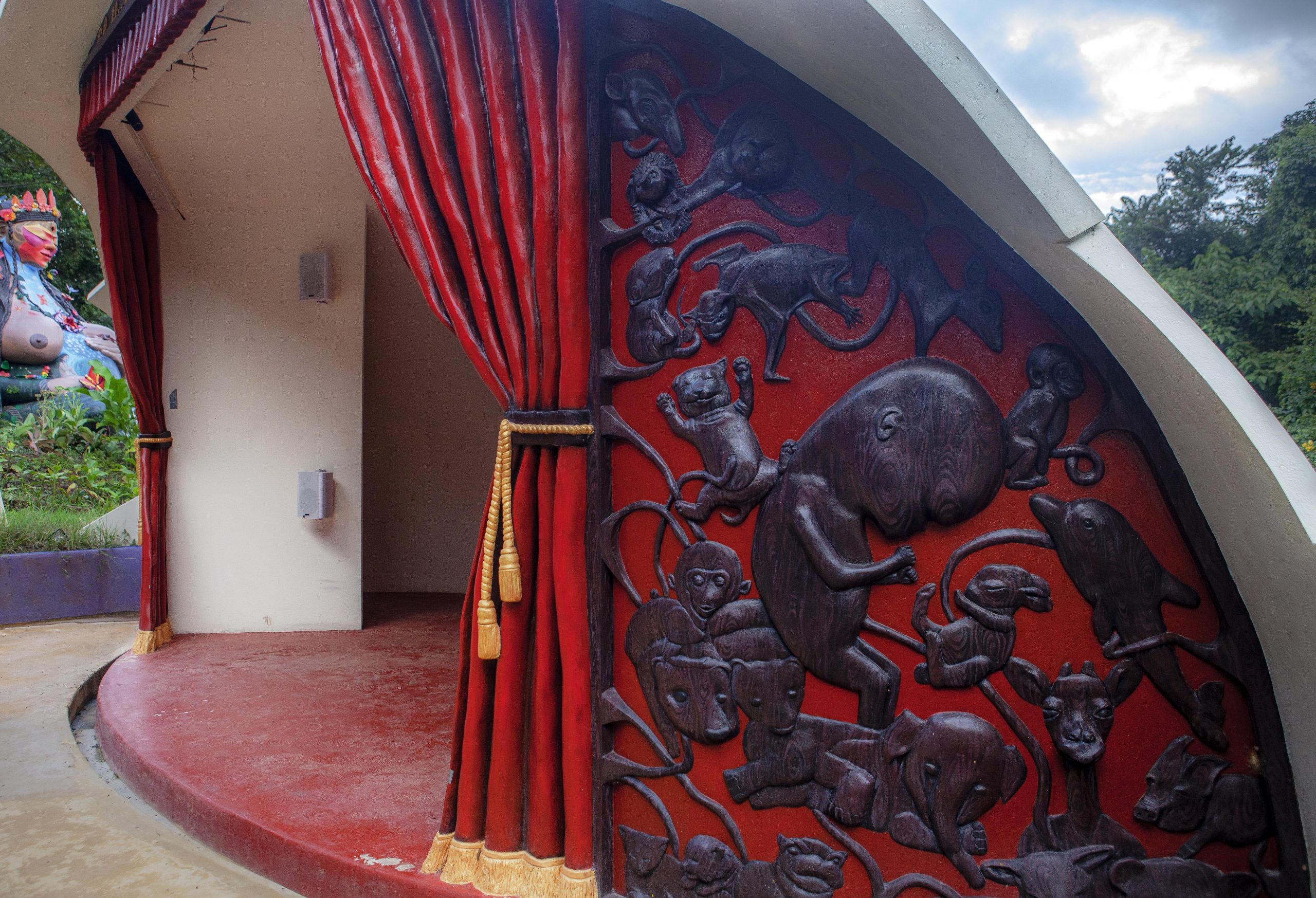 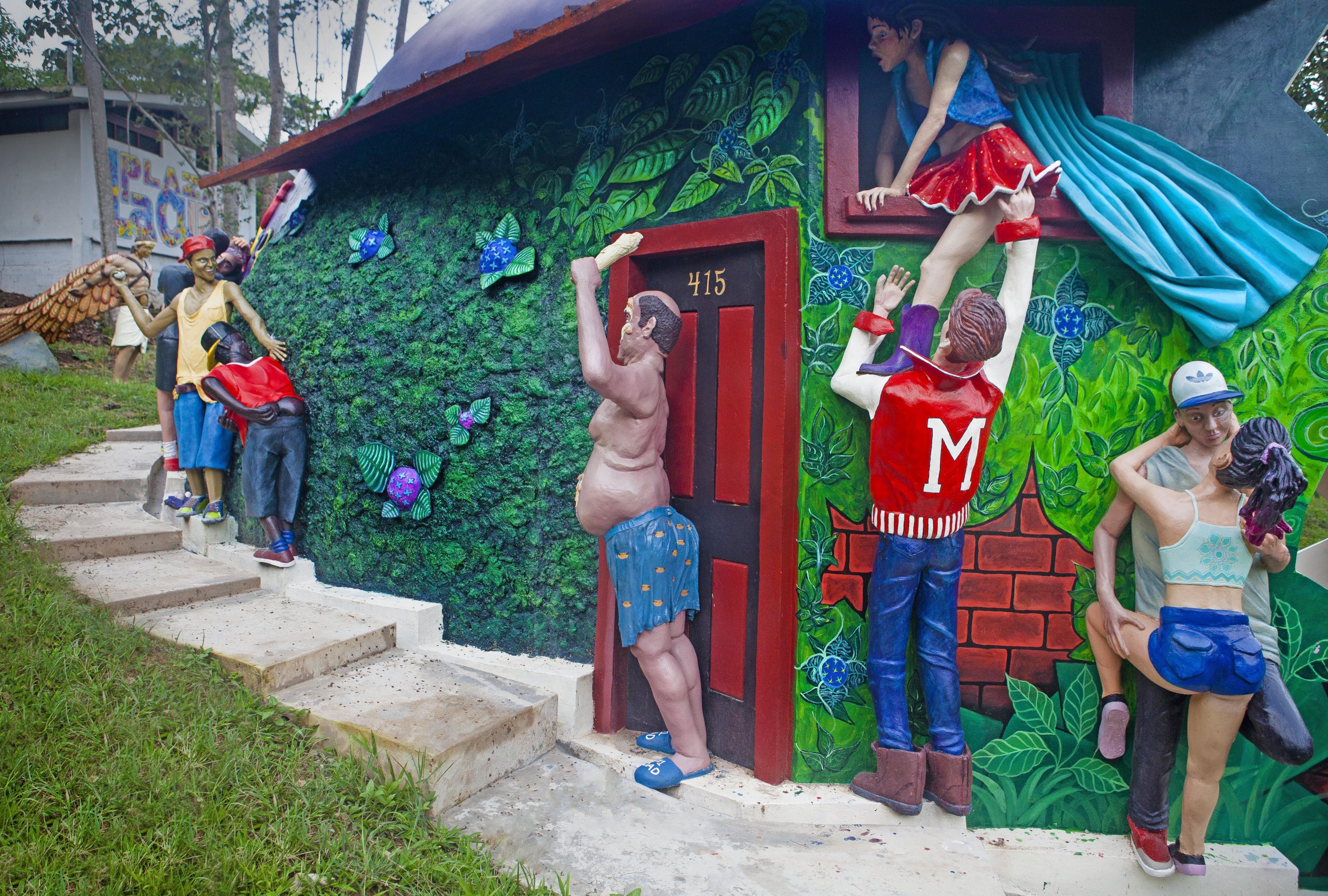 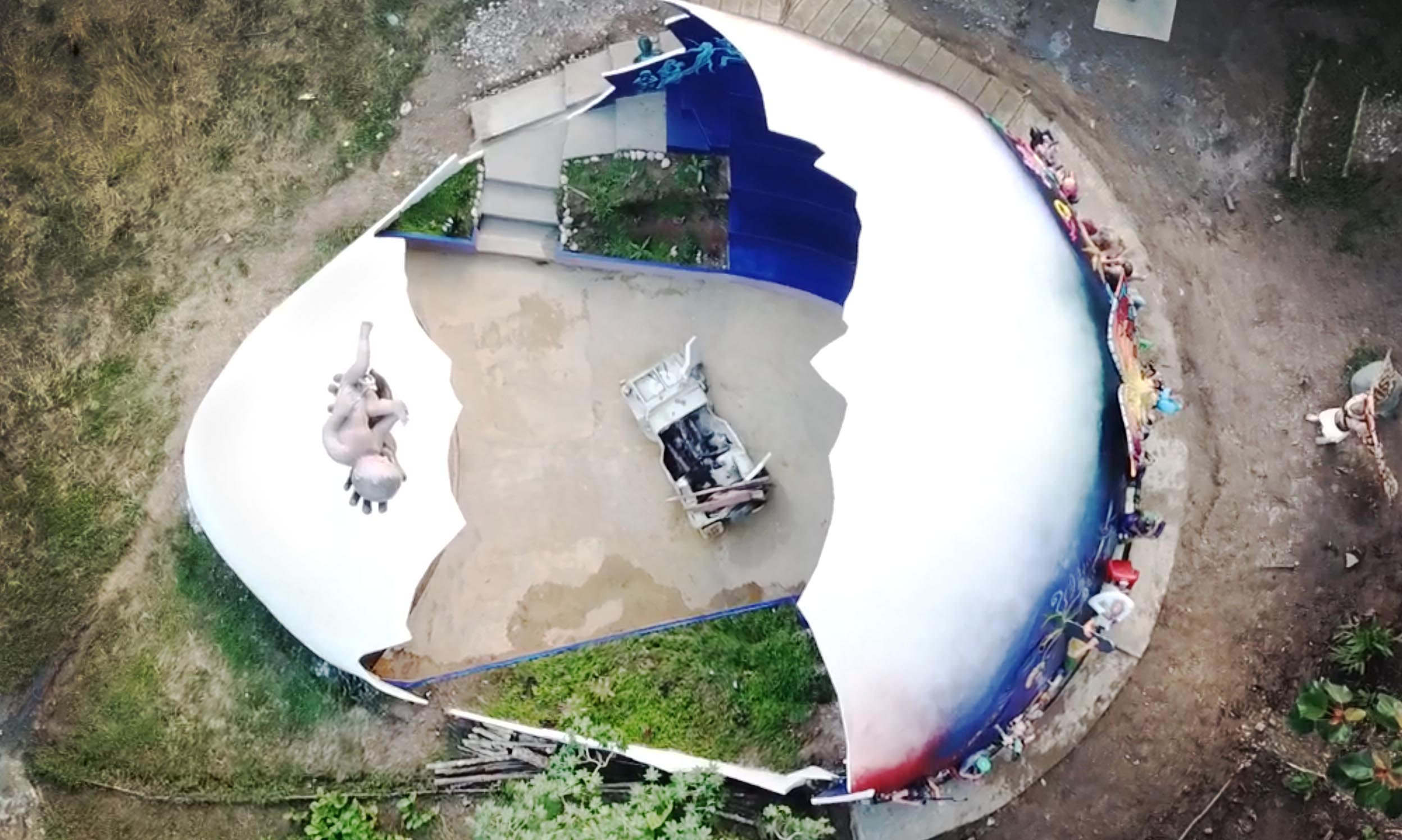 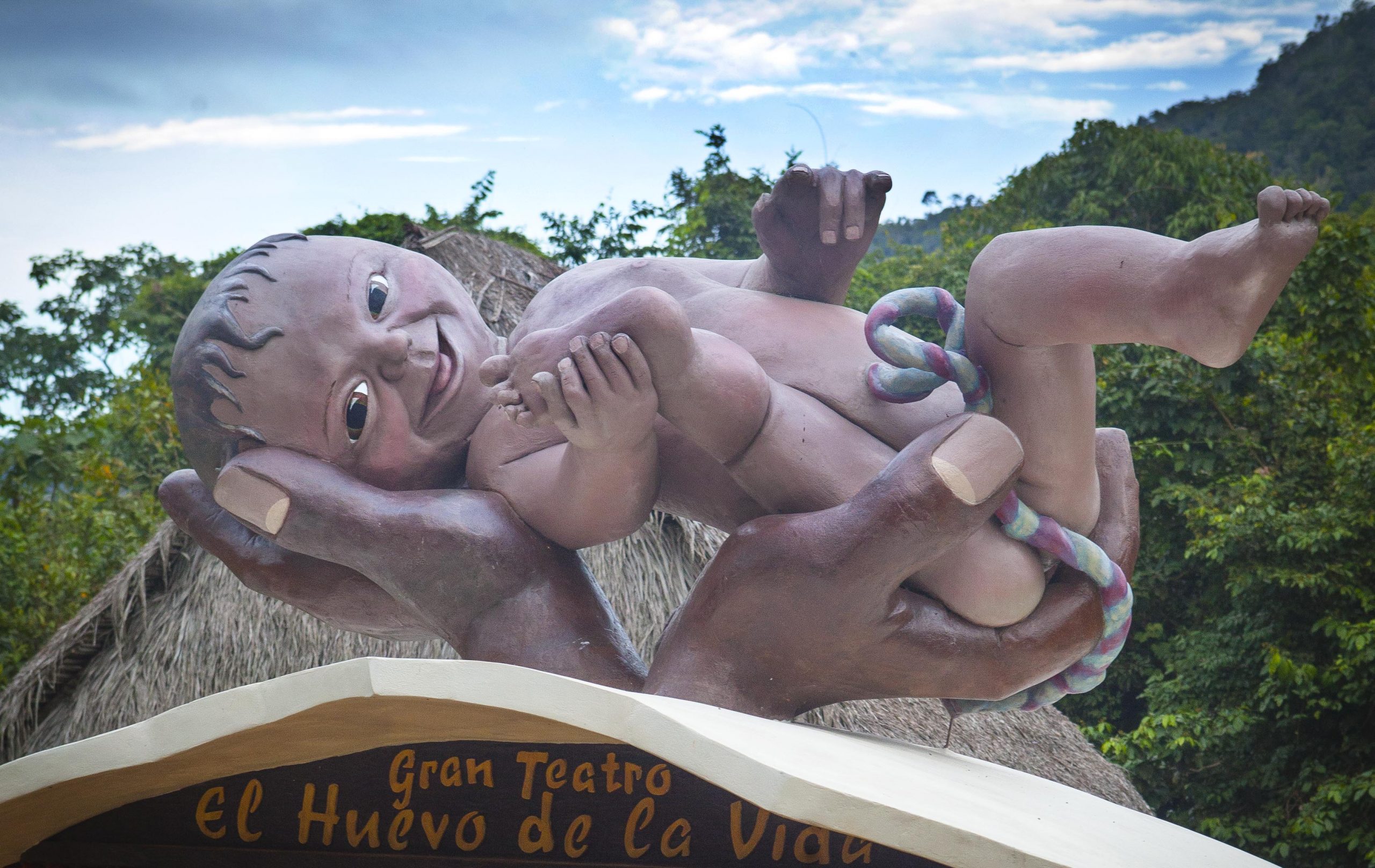 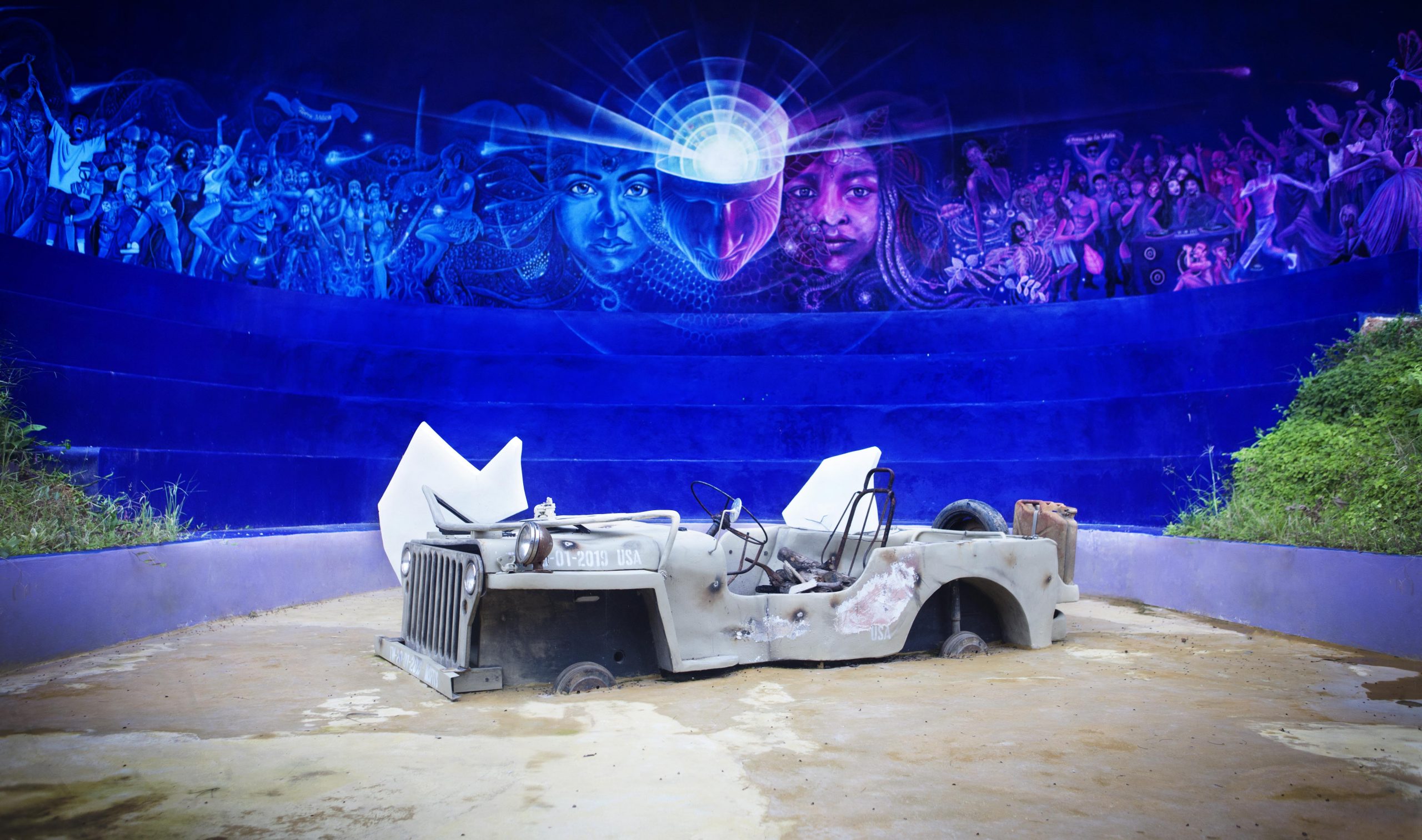 A sculpture of a giant broken egg encapsulating a 140-capacity 70m2 amphitheater. This is the result of the collective effort of 38 people during free public sculpting event/live show. The wide end of the egg is devoted to ‘adolescence’ and the exterior walls were sculpted collectively during the free public event. The narrow end of the egg (devoted to ‘birth’) cradles a giant newborn baby above, and a variety of relief sculptures of baby animals to the left and right of the stage. El Huevo is one of many installations in TierraMitica’s ‘lifecycle’ sculpture plaza.

Misfits Unified is all about bringing people and communities together by coordinating public Collective Art events. Misfits Unified will inspire and engage members of your community, school or organization and show them how to create truly spectacular pieces of art and sculptures in a public live show. El Huevo is the result of this process undertaken for TierraMitica.

A key ingredient is to inspire and teach each person through every stage of the project right from the initial concept and vision through to the final execution. The goals our Collective Art projects are to unify the vision, inspiration and craft of various disparate people, with disparate skills and abilities, into one collective entity where every person regardless of artistic background feels equal representation, contribution, pride and accomplishment in the final creation.

In this manner, TierraMitica opened its doors to members of the public from all over the world to collectively create the dozens of sculptures shown. Once the sculpting was completed, TierraMitica opened its doors to the public once again for a free painting event where the sculpted scenes plus the 18-meter mural inside of the egg were all painted in 5 days by another group of participants.

Prior to the public sculpting event Misfits Unified built the broken egg shell structure, the sculpture of the giant baby, the relief walls to the left and right of the stage and the WWII replica Willys jeep fire place. These installations were built in congruence with the style and themes for TierraMitica's sculpture plaza.

The 18-meter exterior perimeter of the wide part of the egg was reserved as a clean canvass for the month-long public sculpting event. Initial vision-setting and inspiration was undertaken on the first day of the event where the vision and ideas were explored during a group meeting which resulted in a variety of scenes being decided upon. Each of the scenes were fully approved by 100% of participants.

Over the course of the month-long sculpting event, 38 participants worked in full collaboration to create a total of eight separate scenes depicting ‘adolescence’. A similar collaboration process was followed a month later during the separate 5-day painting event where all participants envisaged and collaborated as one organism from initial vision through to execution coordinated by the Misfits Unified team.

El Huevo, sculpted collectively, not only resulted in the creation of a beautiful art installation for TierraMitica, but it also fully engaged the participants of the free sculpting and painting events during its creation.