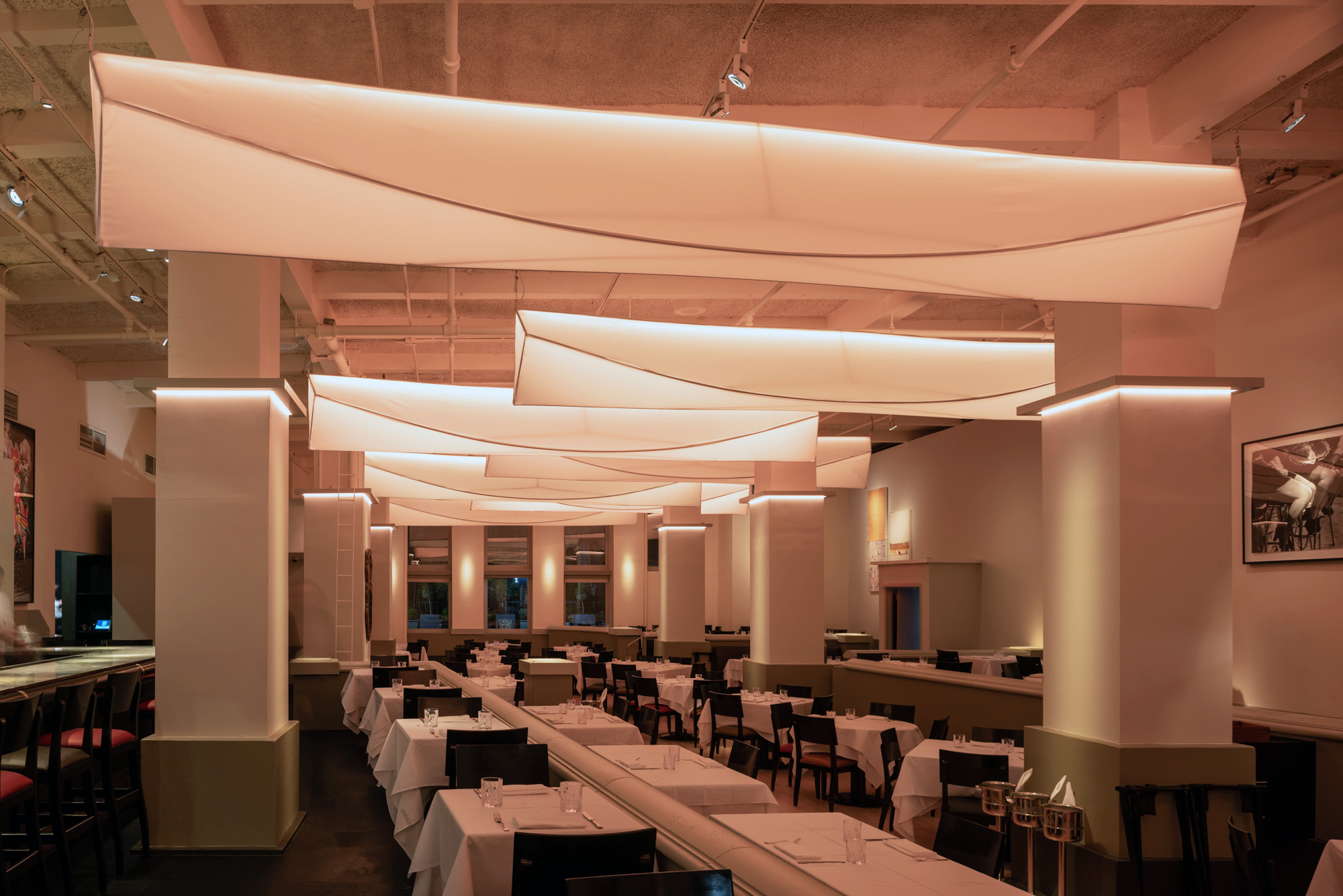 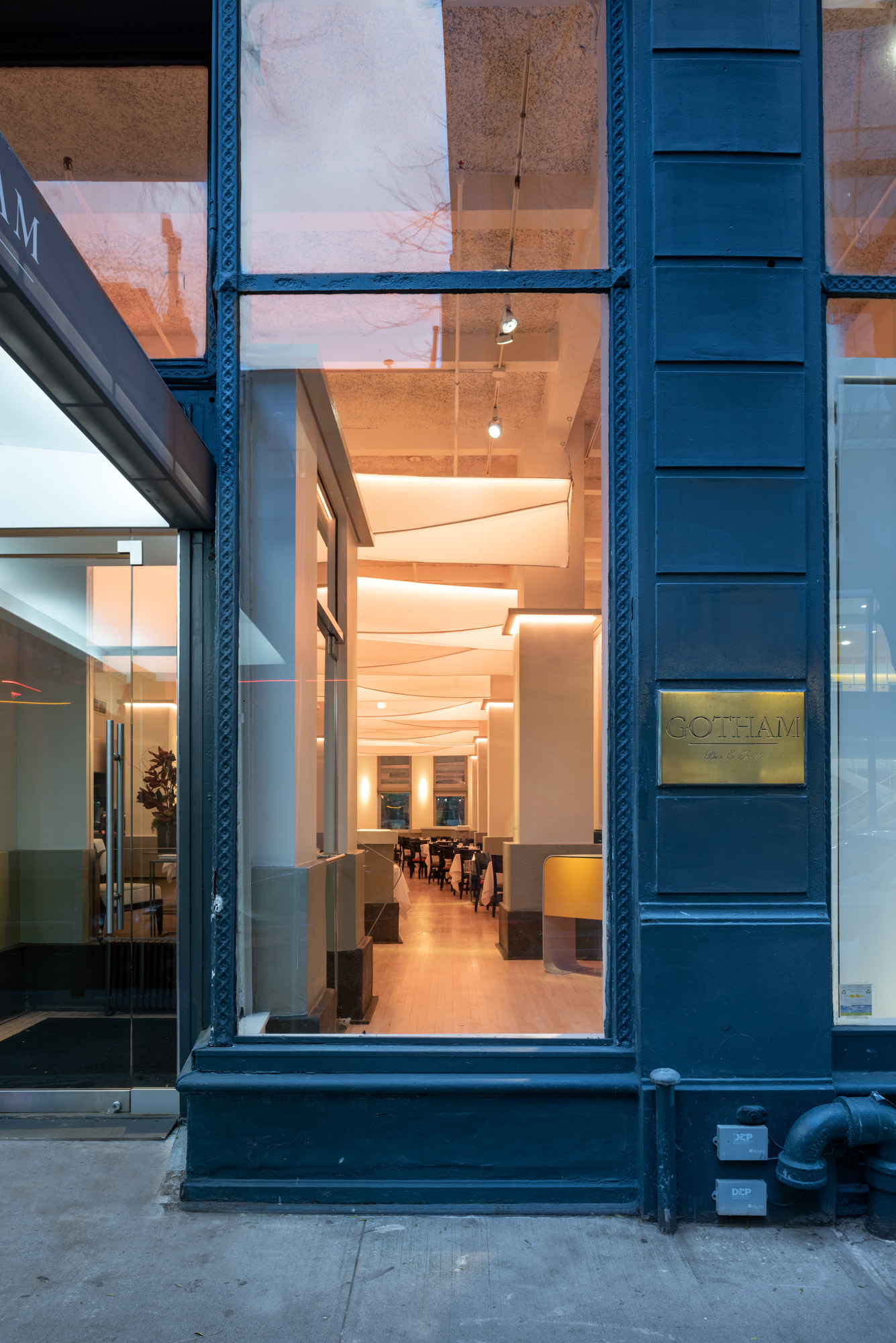 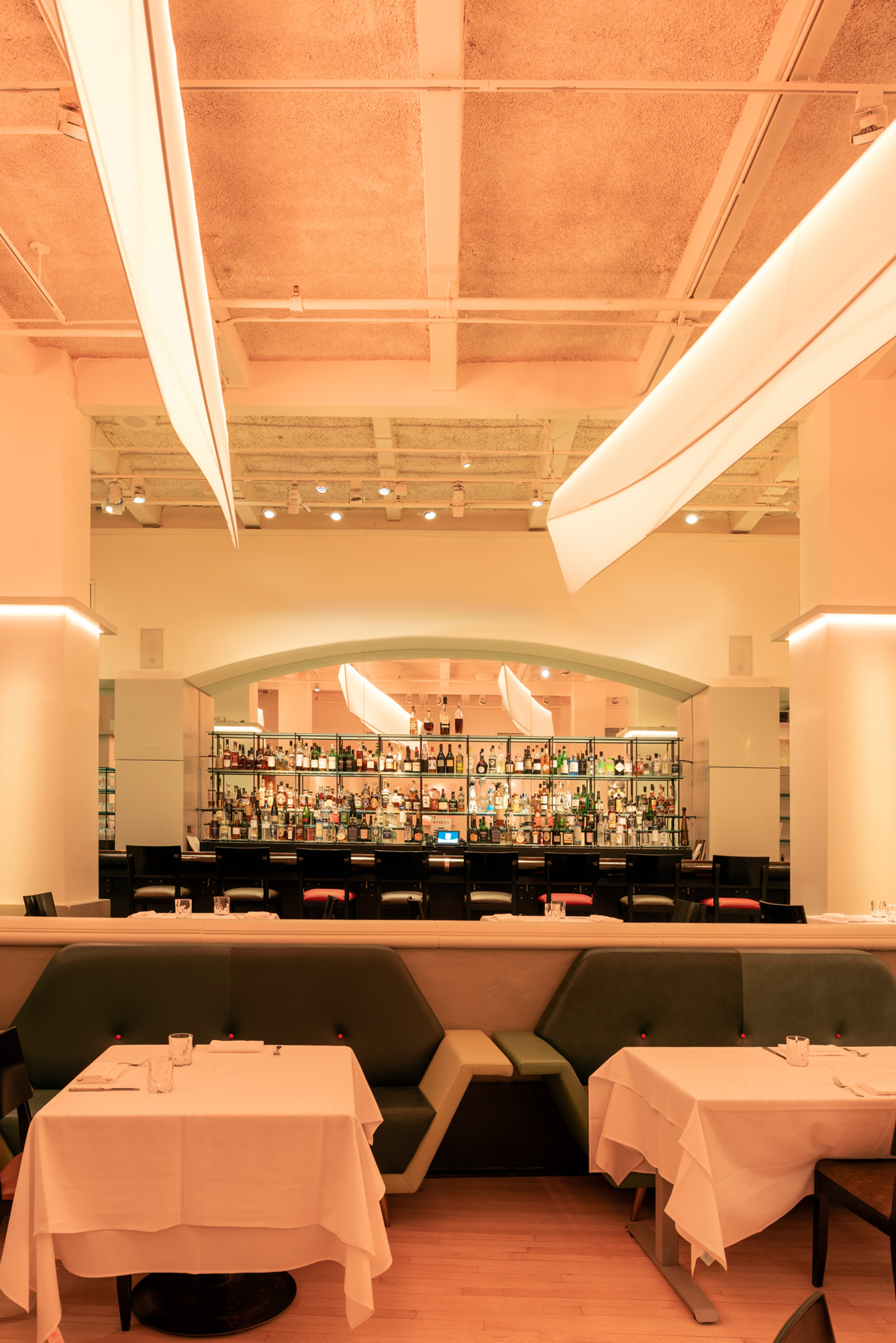 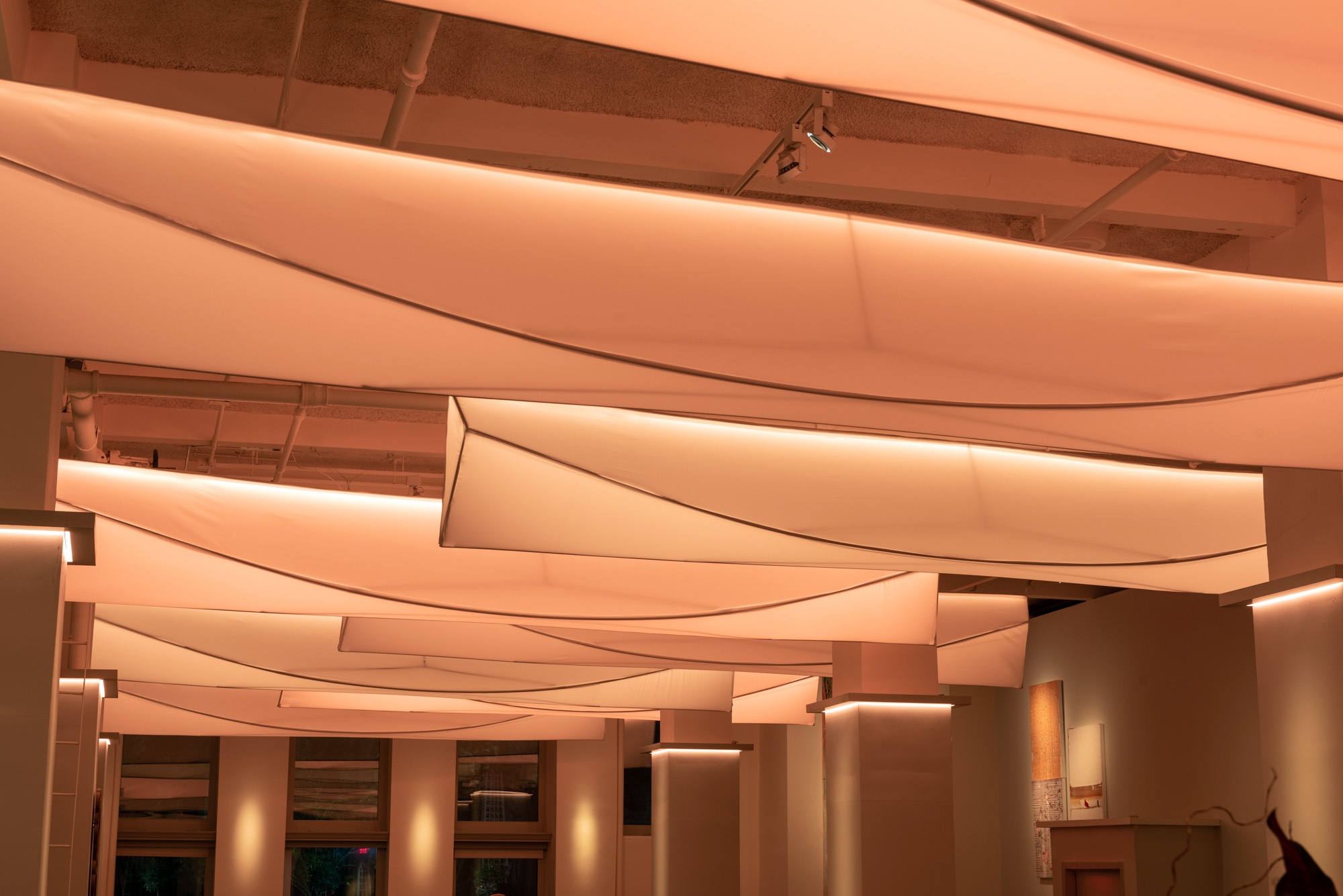 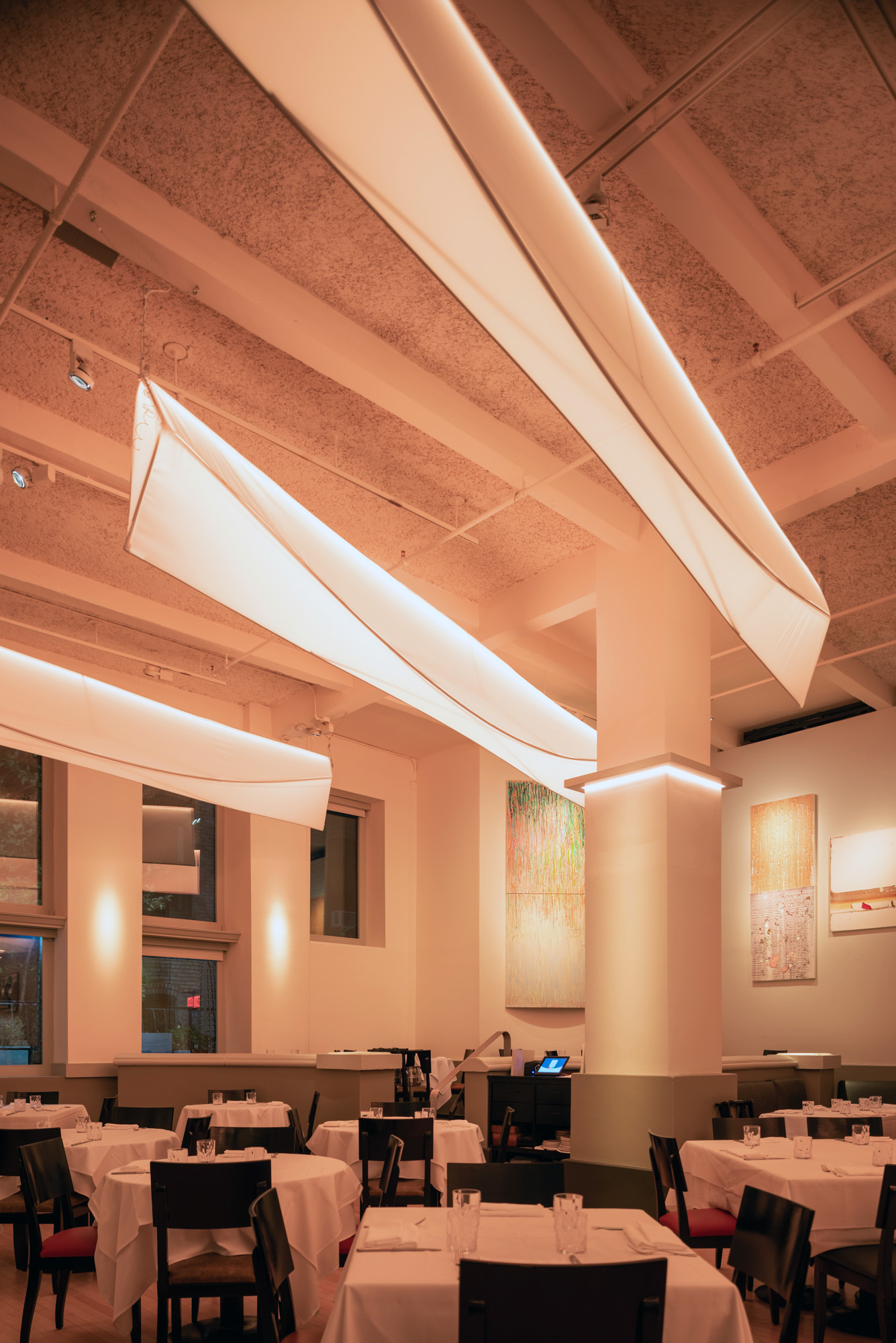 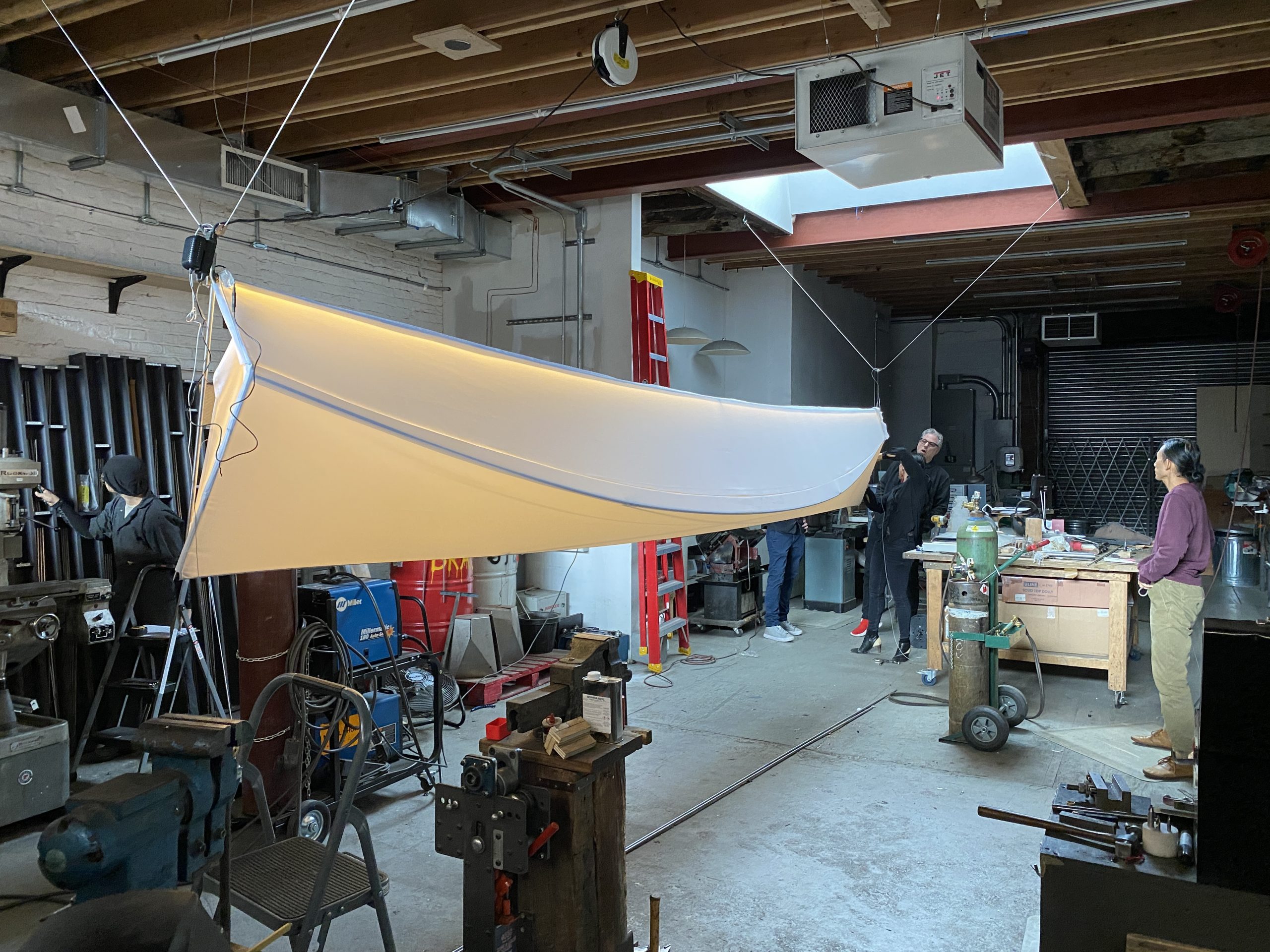 Brooklyn-based lighting designer David Weeks was commissioned to reimagine the iconic, traditional lighting that was the primary design element of the original Gotham space. The entire project was commissioned, conceived, designed, constructed, and installed in just six weeks.

Weeks designed nine deceptively simple forms, each spanning a vast 20-feet. LED light is trapped within a steel frame by Rosebrand’s translucent theatrical drapery, a notable departure from Weeks’ signature precision metalwork. The fabric forms a taut and luminous skin around the structural skeleton of each hand-made piece. Throughout the fabrication process, Weeks worked closely with Andrea Lauer; a Broadway set designer with a background in material science. In a marriage of old-world tailoring craft and modern design, the two created a lighting program that is at once minimalist and monumental.

Appearing weightless with minimal interior scaffolding, gravity serves as the lights’ primary driver of form. The pieces hang like giant glowing louvers to affect a floating ceiling. With no hard source, the light quality is soft and diffused, almost ethereal.

When Gotham first opened its doors 36 years ago, it sought to break from convention. At a time when dining existed only at the poles, the owners set out to create something for those in the middle: a lively, downtown restaurant that could capture the spirit of a Parisian brasserie while remaining unabashedly American. The grand setting, first-class food, and unpretentious service made it an instant sensation. From the start, the mission was to bridge the gap between fine dining and fun. Little did the owners realize that it would redefine dining in New York—the first of many restaurants that now anchor Union Square as a destination for first-class culinary experiences. In time, Gotham would go on to receive a record six 3-star reviews from the New York Times.

In 2020 Gotham closed its doors with the first wave of the pandemic, whereupon their longtime Managing Partner immediately began searching for a way to come back. He soon found a way, and this November Gotham reopened, 20 months after serving its last meal.

Gotham “2.0” has reopened with respect to the past and a responsibility to bring Gotham into a new era of excellence, striking a balance of nostalgic and new—between your favorite memories, our finest moments, and a bright tomorrow for us all.

Driven by the new owner’s belief in the restorative power of restaurants, Bret Csencsitz has brought back a recognizable Gotham while fueling a round of modernizations to the space. The most notable being the replacement of the iconic lighting fixtures that once adorned the space for 30+ years ago. An extremely collaborative team came together to reimagine the space. Together with Jim Biber of Biber Architects, they commissioned Brooklyn-based lighting designer David Weeks to reimagine the iconic, traditional lighting that was the primary design element of the original Gotham space. David Weeks collaborated closely with Andrea Lauer; a Broadway set designer and Lighting Designer, Jeff Croiter to complete the vision. The entire project was commissioned, conceived, designed, constructed, and installed in just six weeks.