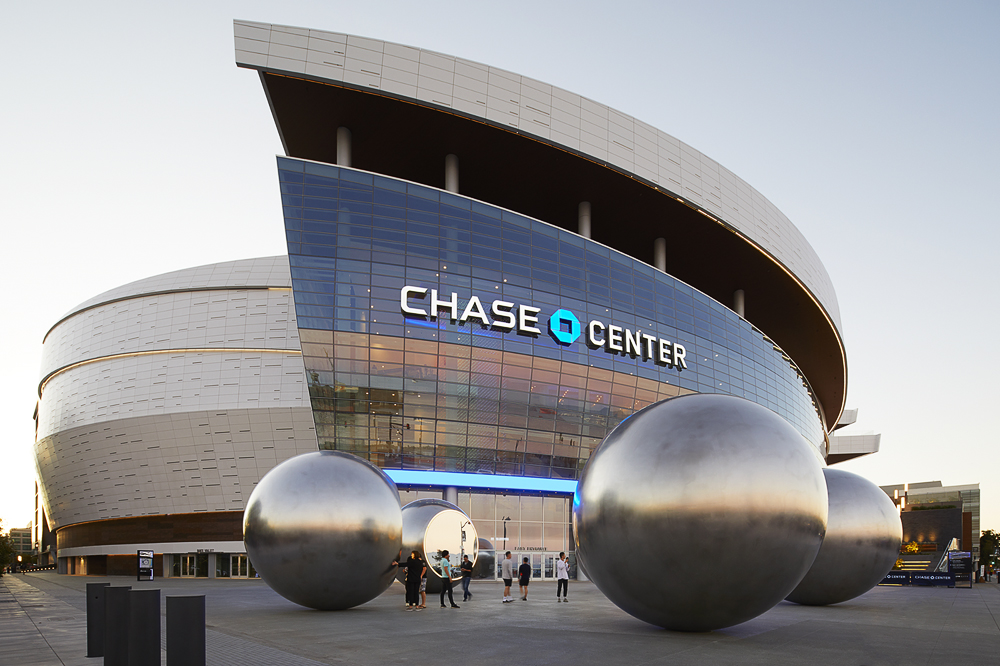 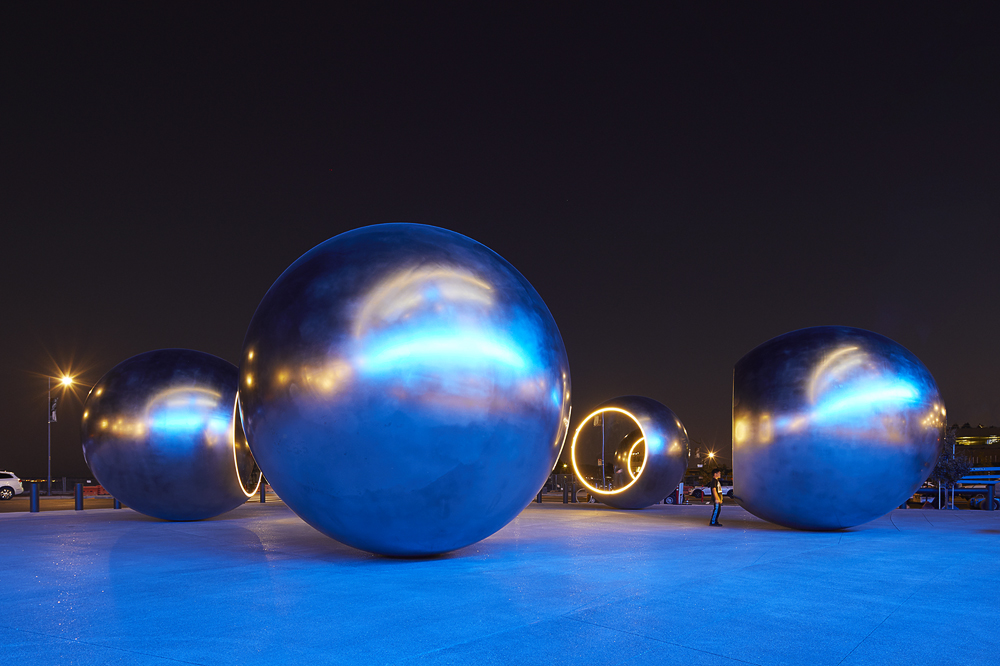 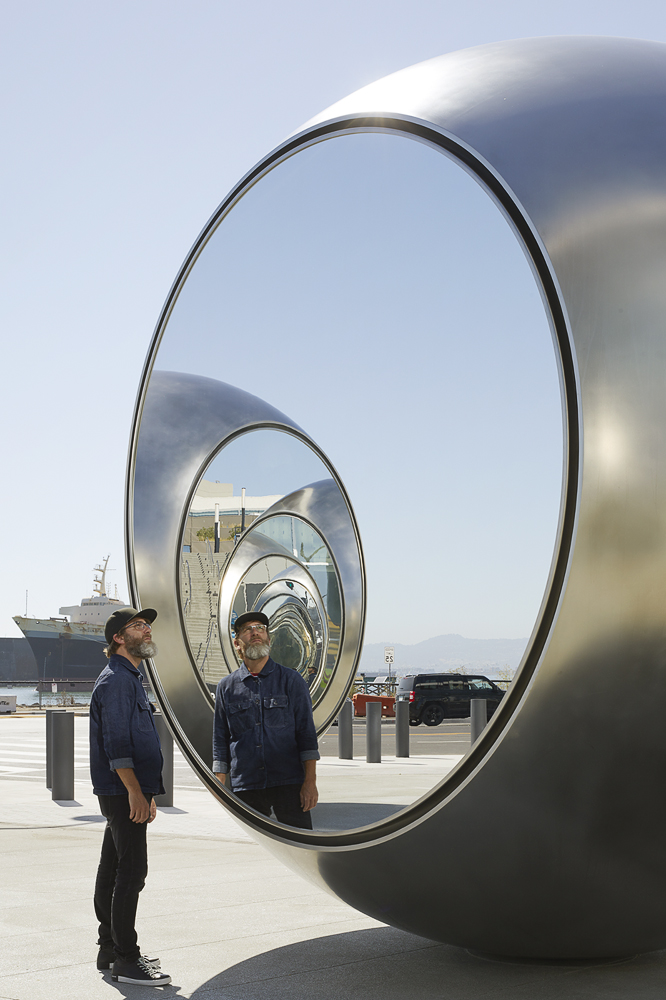 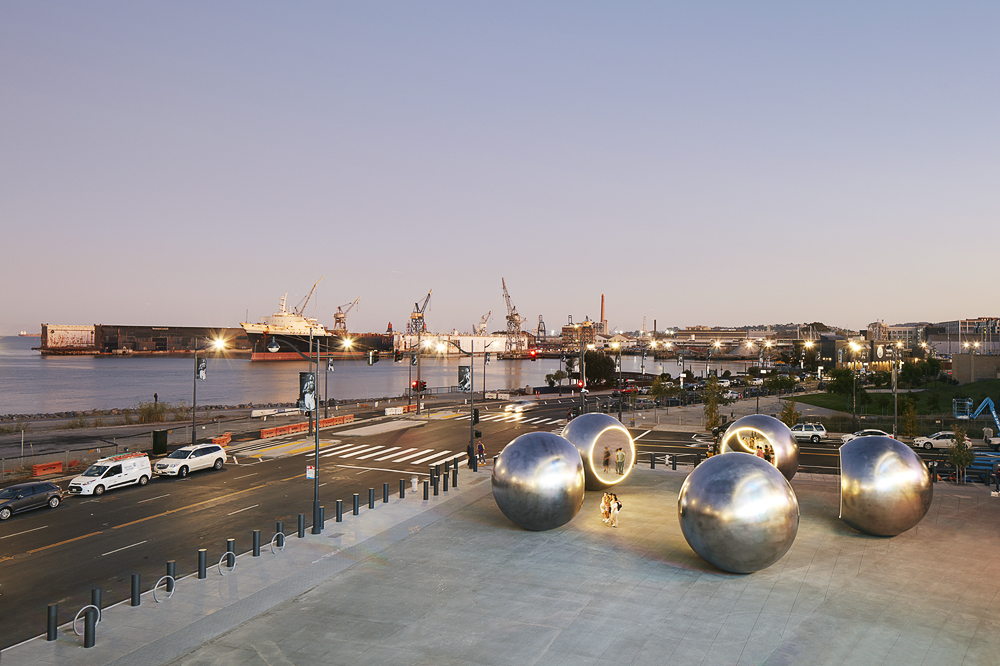 Olafur Eliasson’s Seeing spheres consists of five fifteen-and-a-half-feet-tall polished hydroformed steel spheres that stand in a circle around a central space. Each sphere supports a flat, circular mirrored face, framed by a ring of LED lights, which is oriented inward to reflect the mirrored faces of the surrounding spheres. Together they produce a surprising environment of multilayered, reflected spaces in which the same people and settings appear again and again, visible from various unexpected angles. Tunnel-like sets of nested reflections open up in the mirrors, repeating countless times and disappearing into the distance. Situated on Chase Center’s 25,000 square foot triangular plaza in front of the East Entrance to the arena, this striking new artwork establishes a prominent public setting in Thrive City for visitors to meet and interact. Eliasson’s art is driven by his interests in perception, movement, embodied experience, and feelings of self. He strives to make the concerns of art relevant to society at large and has become internationally renowned for the social and experiential impact of his artwork.

The goal was to commission an ambitious and iconic artwork of the highest aesthetic quality that will provide a bold and distinctive visual feature for the Project, thereby enriching the Owner’s vision of developing a world-class event center. The artwork was to engage Arena patrons and the broader public throughout the day and evening by offering a space within which visitors may come together, interact, and reflect. It was to serve as a central feature not only for the Project, but also for the Mission Bay neighborhood. The artwork was to become an important art attraction for the City of San Francisco and to contribute in making the Project a landmark destination.

The Owner selected the Southeast Plaza for the artwork’s location as it is highly visible and photogenic from the air, Bay, and ground. The location offered the artist an unprecedented opportunity to play a leading role in interpreting the Project’s public realm while also engaging with and humanizing the scale and mass of the Arena. The artwork also usher visitors into the site, serves as a place to gather, and act as a point of connection with the adjacent waterfront park and surrounding areas.

As a first step in developing the Project’s public art program, Keehn On Art (KOA) was tasked with producing an Art Master Plan. The Art Master Plan provided the Owner with a framework for implementation and an aesthetic approach to integrating and placing art on the site. The master plan process first identified eight potential locations for commissioned public art within the Site. After a prioritization analysis, KOA determined that the Southeast Plaza is the location that best articulates the goals of the Project’s public art program. A priority goal is for the artwork “to create a unique visual identify for the Project.” KOA then worked closely with the artist to insure that the artwork fulfilled the goals of the Art Master Plan. Additionally KOA managed the collaboration between the client, artist, construction team, and structural engineering. Engineering for the artwork was complex as the plaza sits atop a parking structure. Installation was also complicated as the artwork was so large that it required special containers, road closures, and electrical wires removed along the route.

Eliasson frequently uses mirrors to expand spaces and create a subtle and playful sense of spatial confusion that stimulates awareness of our bodies and perception. Seeing spheres enables viewers to see themselves from the outside, as co-participants in the shared world that appears within the layers of virtual space conjured by the cluster of giant mirrors. The artwork heightens visitors’ awareness of themselves and their surroundings, exemplifying art’s potential to, in Eliasson’s words, “train our capacities for perceiving and interpreting the world.” “Working with a multi-million-dollar budget and a client with a vision of building community, I knew that Olafur was the perfect artist for the new home of the Warriors and was thrilled when the owners selected him,” notes Dorka Keehn, project public art consultant. “The Warriors and Chase Center have gifted San Francisco with an exceptional work of art by a world-renowned artist, who has a strong connection to San Francisco. Seeing spheres is a destination piece, a work that reflects the soul of the new neighborhood, and the ideal example of San Francisco’s “1%-for-art program” enhancing and enlivening our city in tandem with our urban growth.”