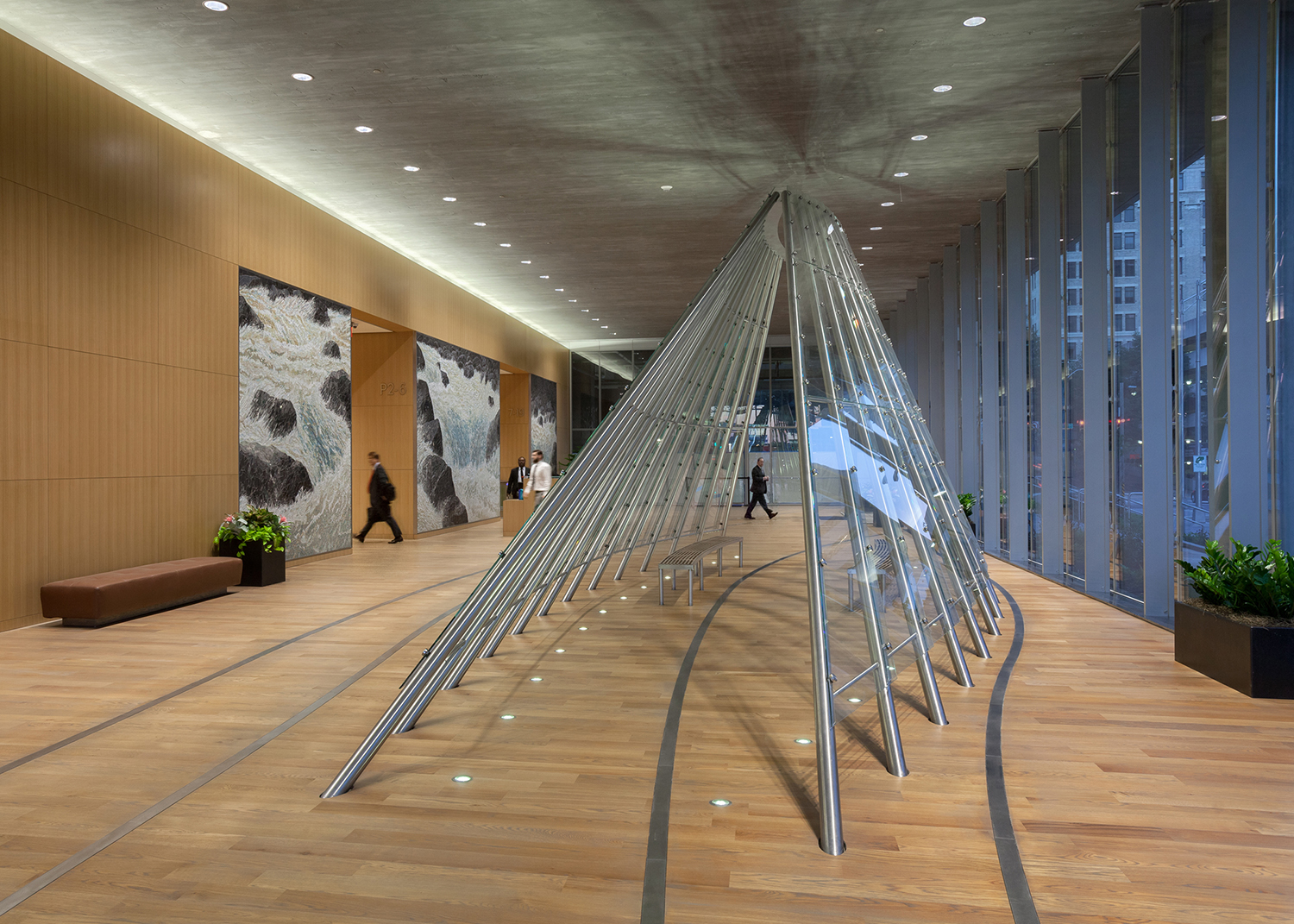 Gateway Trio creates a unified place inside and outside the lobby of Gateway Plaza in downtown Richmond, VA. Gateway Trio honors three elements (geography, commerce, and government) instrumental in the settling of Richmond and maintaining its vivacity. They are: River Song, a gestural mosaic of the rapids of the James River (13’ 6” H x 70’ L), Clear Passage, a stainless steel and glass, boat-shaped, walk-through sculpture including two benches. (16’ H x 43’ L x 14’ W), and Capitol Flow, four 250’ long stainless steel, embedded flow lines running curb to curb through the lobby.

We were brought onto the building’s project team before the building was fully designed. We were able to conceive of our work as integral to the conception of the building. Our goals were to integrate the artwork into the structure of the building, create a story, create a sense of being welcomed, and to have the artwork visible from outside. We were able to embed the sculpture into the concrete foundation of the lobby and ensure that the flow lines were laid at the same time as the outside pavers and the lobby floor. Since our work focused on a story of the confluence of three forces that shape Richmond (geography, government, and commerce), our artwork and its story became integral to the fabric of the building and the people in it. The building’s main tenant McGuire Woods for example, used our mosaic imagery and story in their corporate diversity catalogue. The flow lines, which run from curb to curb through the lobby, create a welcoming flow into the building. Since the lobby windows are floor to ceiling glass, the illuminated artwork in the lobby is welcoming and dynamic when viewed from outside especially at night.

In the process of completing Gateway Trio, we entered into a series of collaborative endeavors. Our working as a collaborative team engaged in all aspects of our projects is the primary and on-going collaboration. Bob Clark, CEO of Clayco, brought us on early in the building’s design to work with the project team: developer, finance director, architects, engineers, landscape architects, interior designers, sales people and many managers. The project team sessions were lively with much sharing of ideas and plans. We also established a relationship with the Executive Director of McGuire Woods, the primary tenant for whom the building was being constructed. This ensured that we were aware of their needs and vision. We had two fabricators: Mayer of Munich for the mosaic and Troco for the sculpture. We worked closely with each during both the fabrication and installation of the artwork. We were present at the site for the installation of all the work that took place in tandem with the construction of the building. As a result, we established a good working relationship with the building’s project manager, foremen, Osha representative and the various construction workers.

The building Gateway Plaza featuring our artwork Gateway Trio won the following awards: First prize from Design-Build Institute of America in the field of Architecture, the Design-Build Institute of America Commercial Building Team Award, the AIA of St. Louis Architecture Design Merit Award and the Project of the Year at the Greater Richmond Association for Commercial Real Estate’s 15th annual awards.