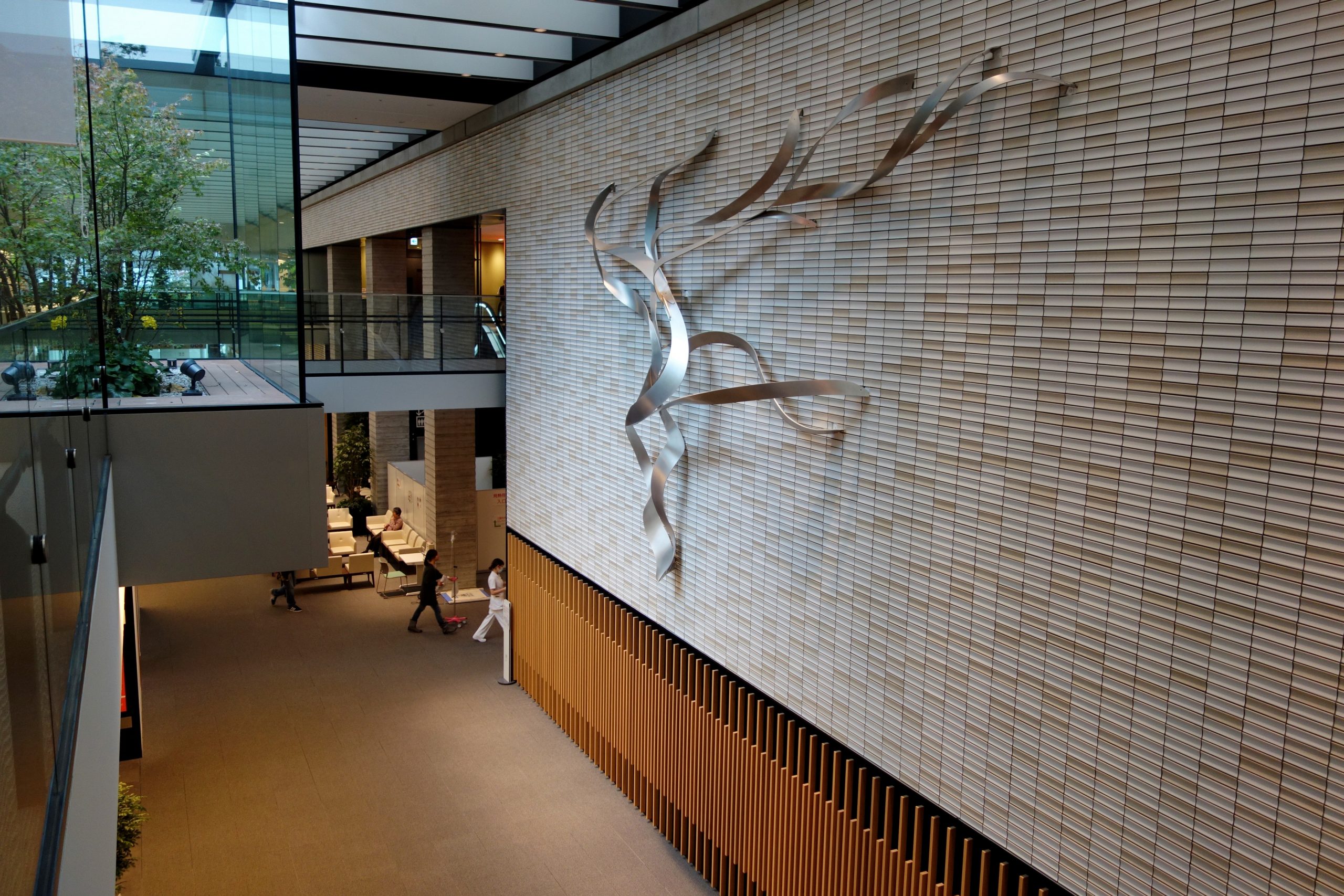 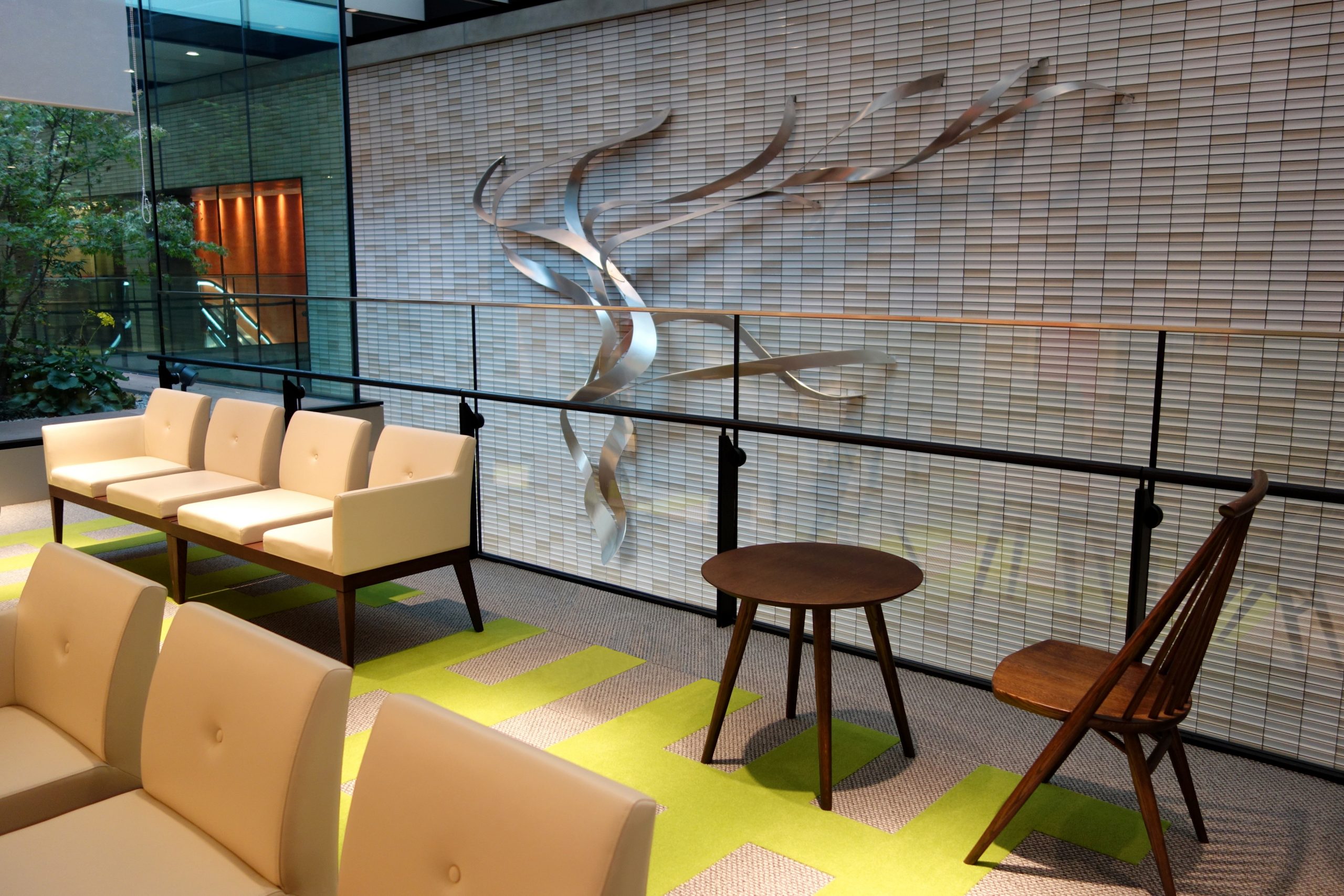 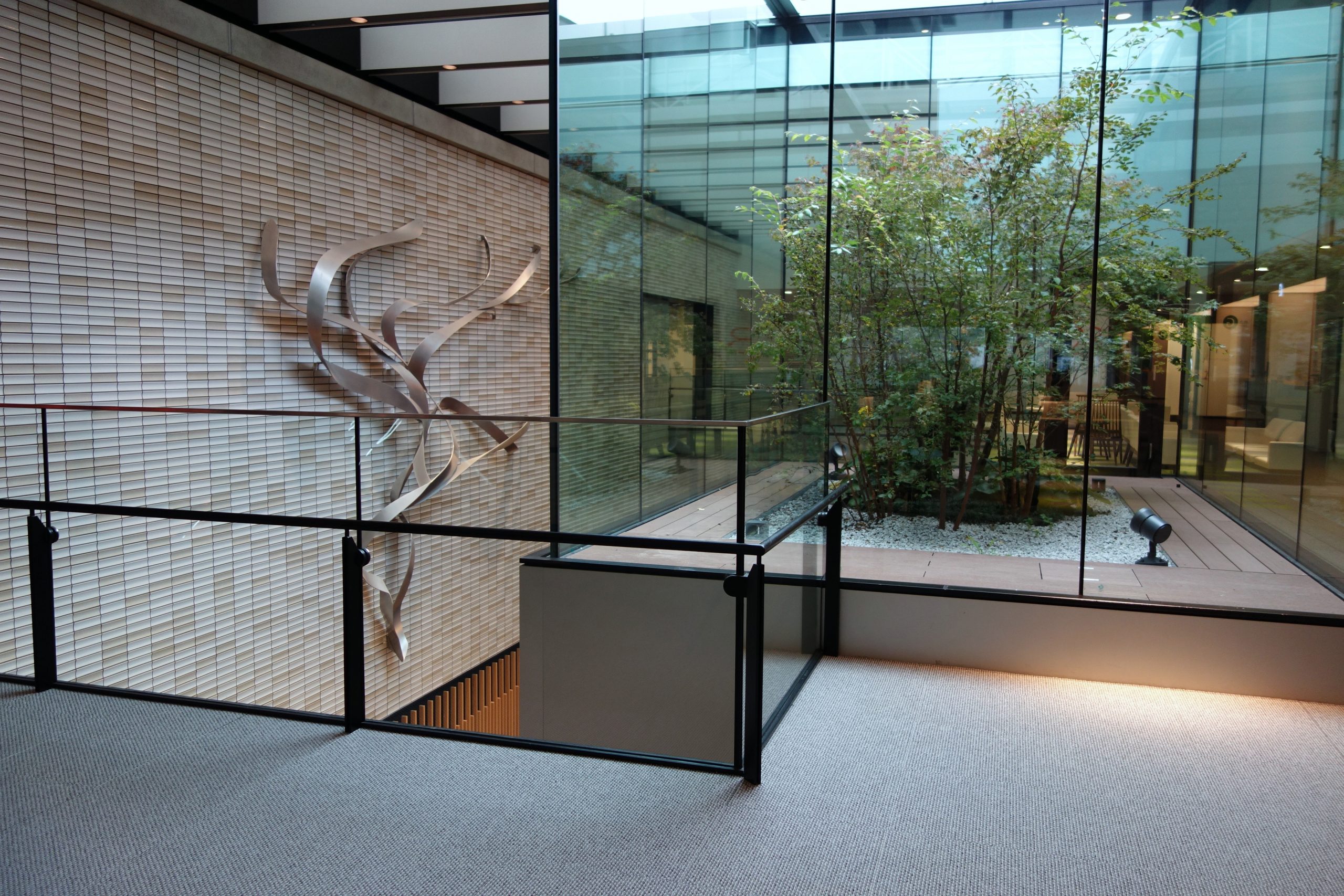 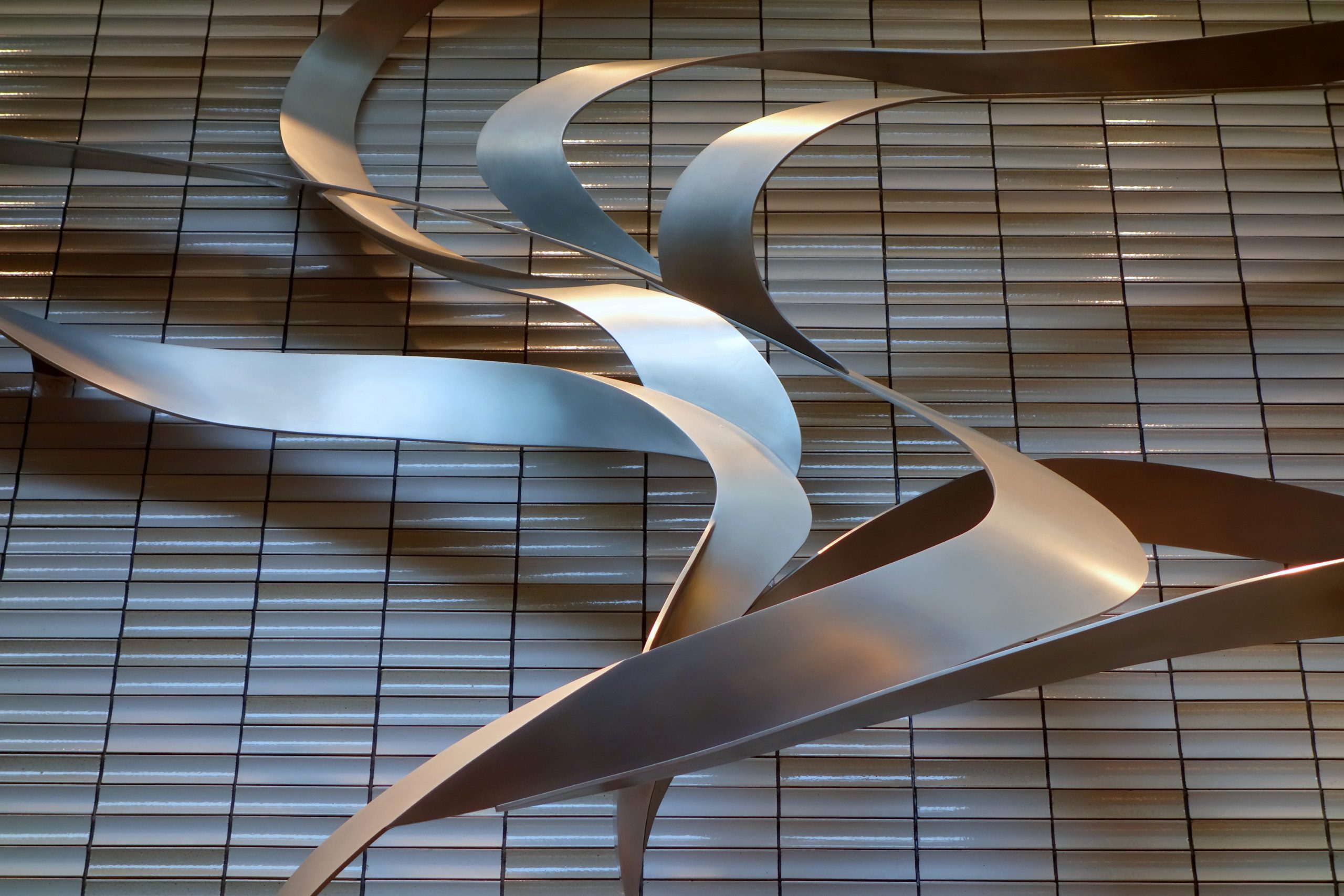 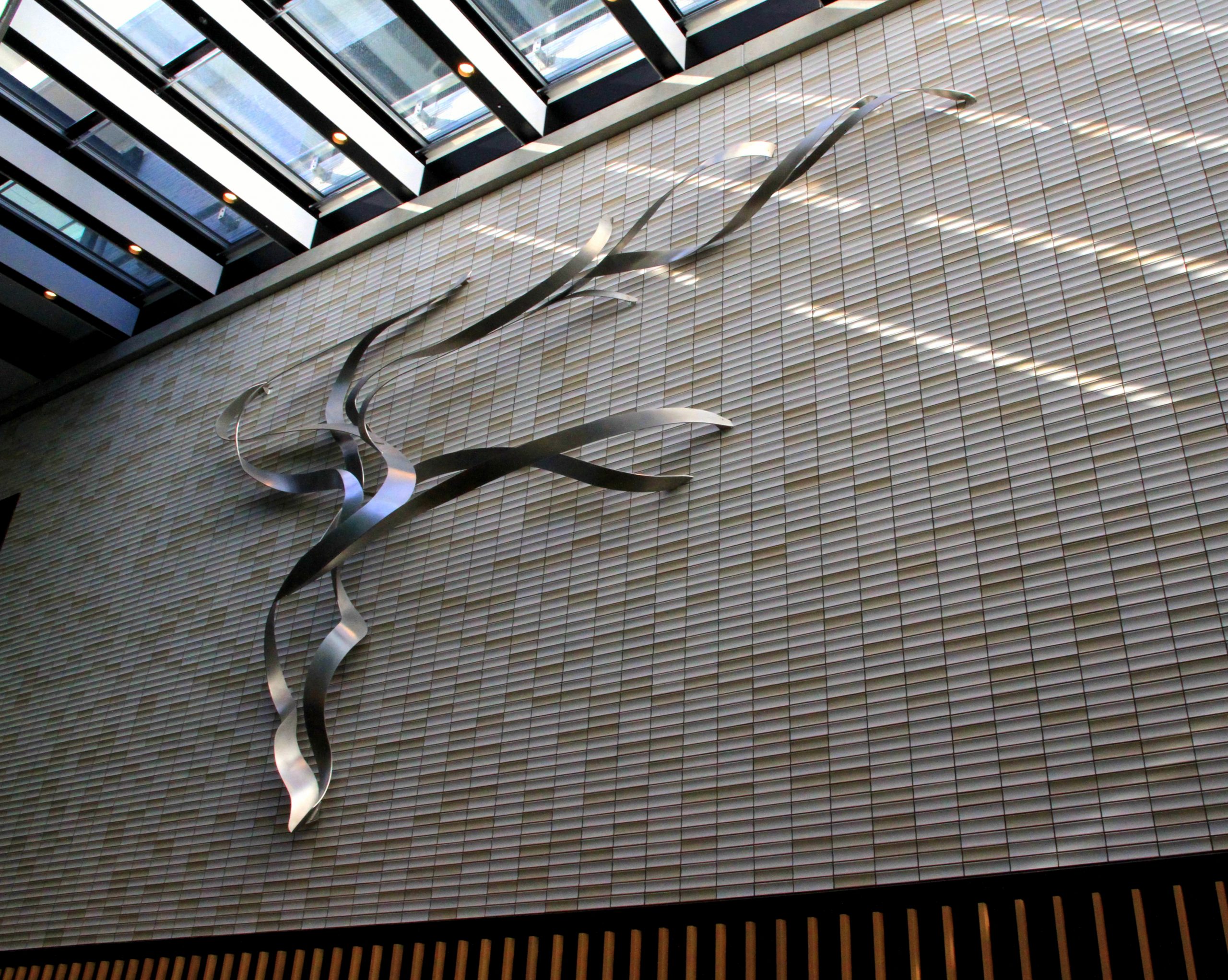 I was asked to create the hospital's focal artwork, on the canvas of a vast 3 story tiled wall in the central atrium just off the main entry and registration area. The openness of the space, the natural sky light from the ceiling windows, and a beautifully landscaped second floor atrium opposite the wall, all had the theme of bringing the outside in. What I contributed was an interpretation of a dramatic cloud formation, unfolding and evolving in a dynamic way across the wall. The sculpture is made of aluminum and measures 26' w x 15' h x 3' d.

The goal was to imbue this interior space with more of a feeling of the exterior. And a big part of that to me was the dynamics. As outdoor light and weather will be constantly in flux, the design team sought to bring this dynamic to an interior space. The ceiling skylights allow the changing sky to come through, but I wanted to give the wall a similar dynamic feeling, with a sculpture design with a lot of implied motion. Having an enormous wall to work with was daunting at first - the wall is over 30m wide and 12m high. My inspiration and theme was changing cloud formations. Specifically the funnel cloud, which is a kind of whirlwind related to the tornado, but which is usually seen at sea. And unlike a tornado a funnel cloud does not touch the ground. And I thought this could be a nice theme for a hospital, a well-wishing of sorts: may your troubles pass harmlessly over head like a funnel cloud.

As a new hospital project for two cities, understandably there were a large number of interested parties, architects, engineers, interior designers and art consultants. Additionally of course these were predominantly Japanese speakers. Helping immensely to coordinate the project was art and curation firm ArtInter Tokyo, with whom I had worked on other projects in Japan. First off they managed a selection process where five artists were invited to submit designs for the atrium art work. After my design was selected there was further design and collaboration on computer models of the environment, scaling the composition to fit the space, and selecting the tile and lower wall materials for the right amount of background texture. Further complicating things were the concerns of engineers regarding hospitals and earthquakes in Japan - to which apply some of the most exacting engineering codes in the world.

The sculpture was constructed in 8 separate sections, with seventeen attachment points anchoring it to the wall. The sculpture was fabricated in my studio the Los Angeles area and crated and ocean freighted to the port of Osaka. I was in Hyogo in July 2013 to coordinate the installation with a crew of 8 people from Art Inter Tokyo. Photographs of the final sculpture: Akio Yamamoto.