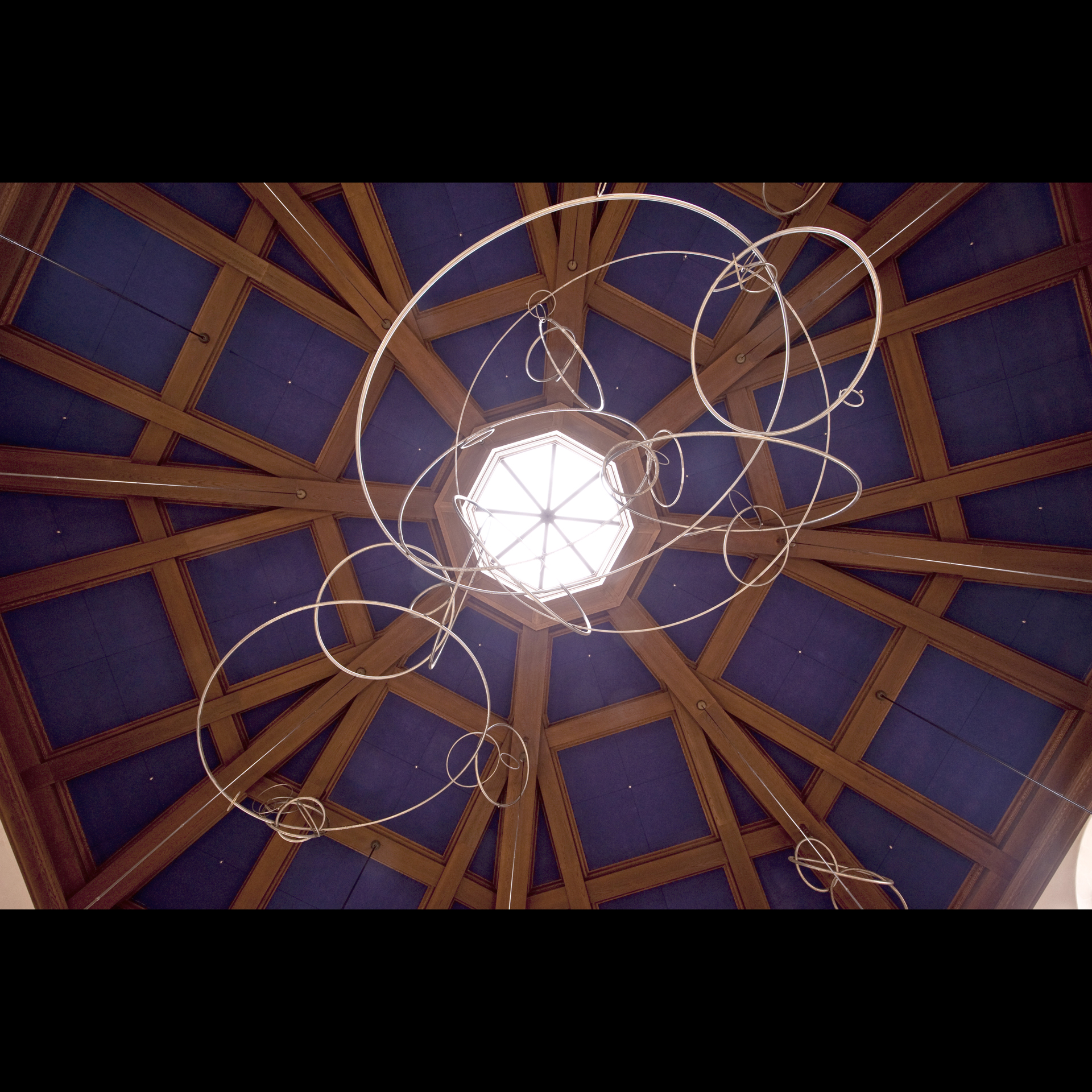 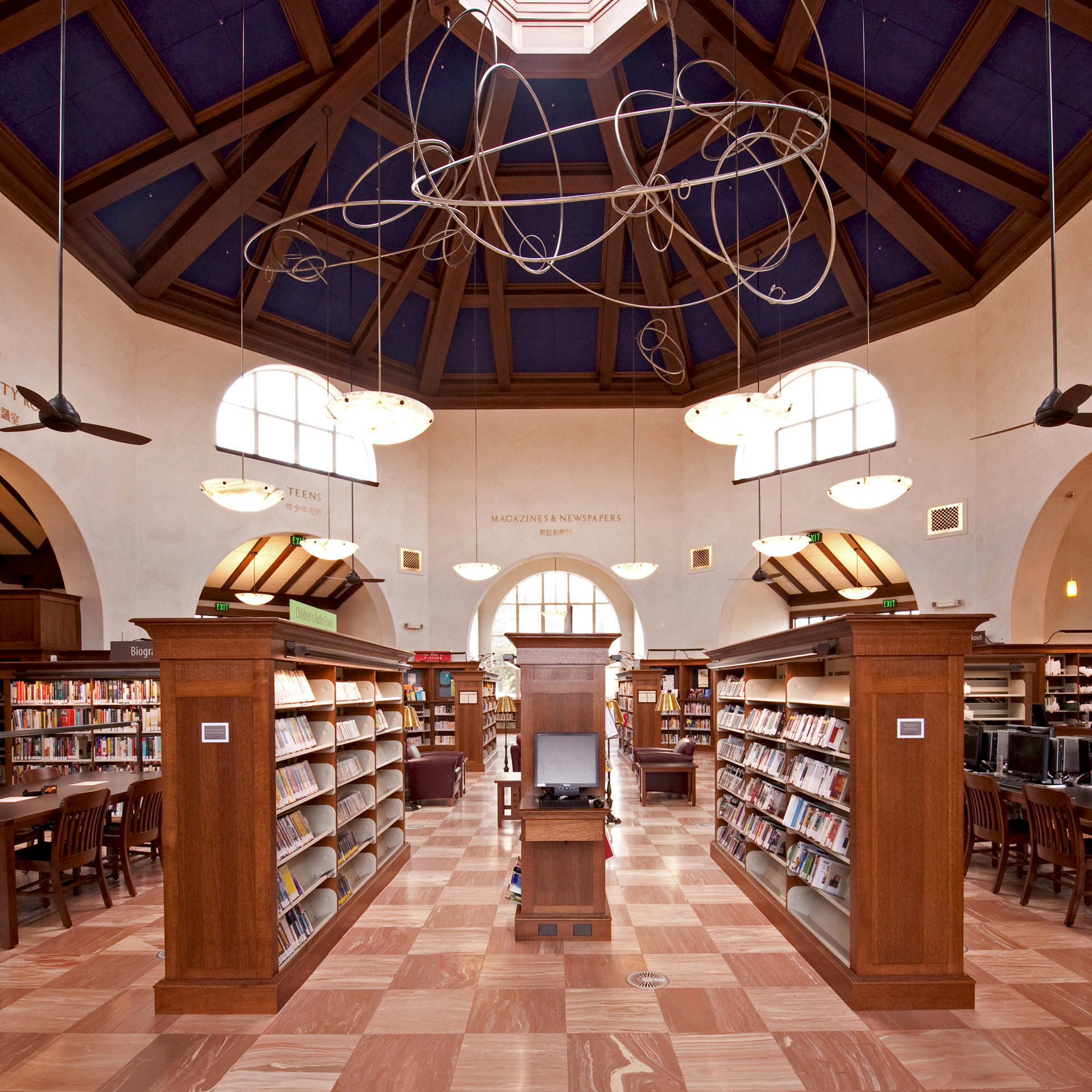 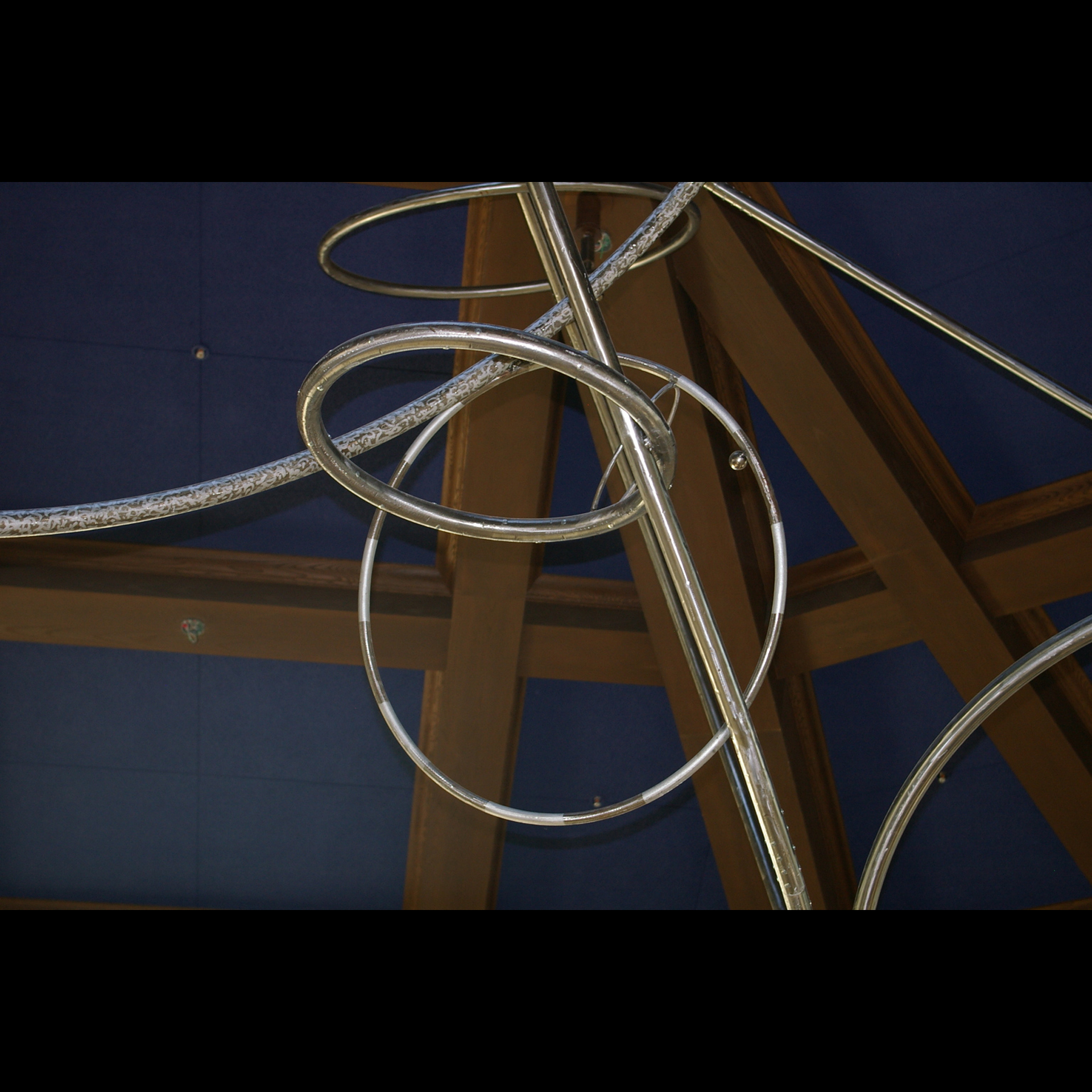 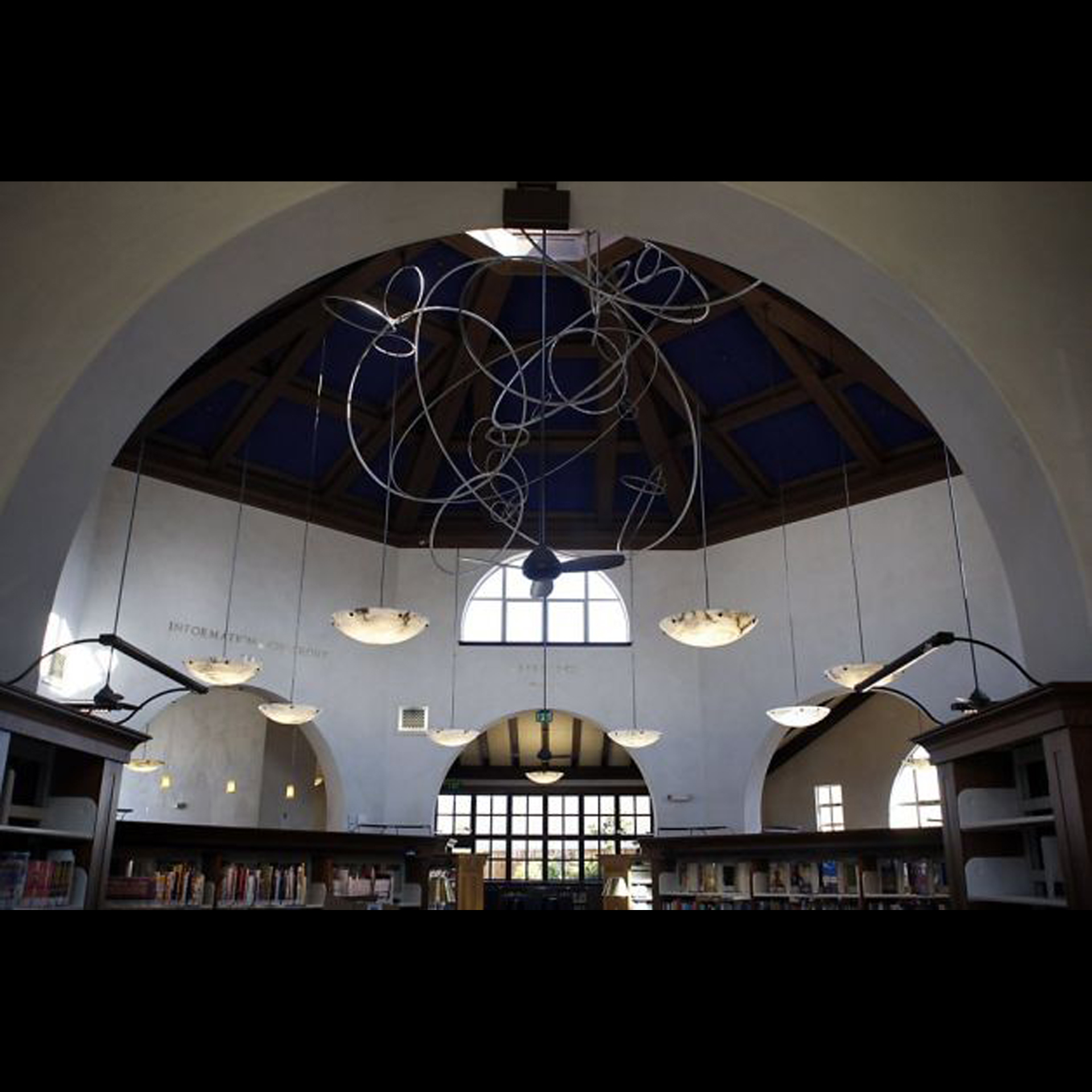 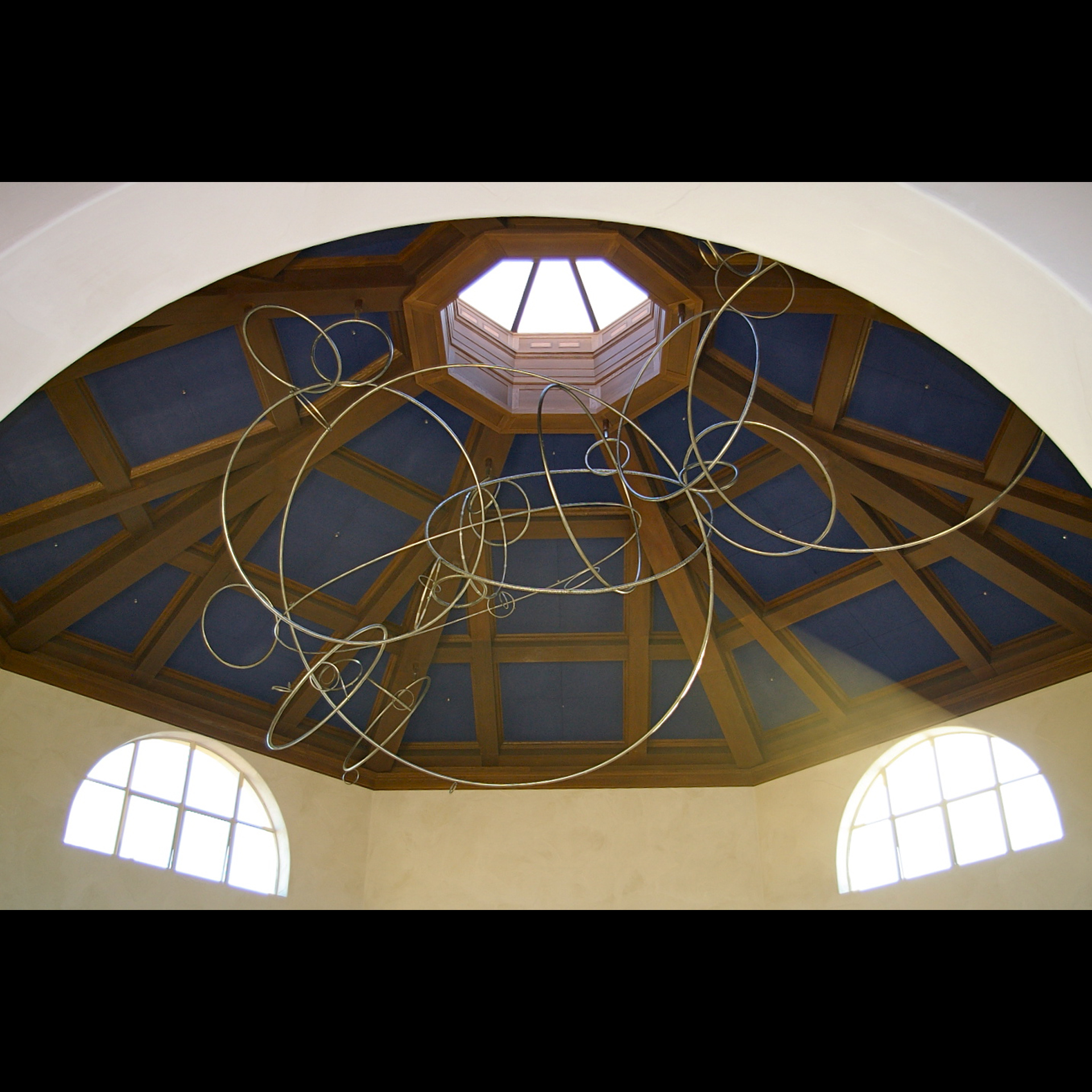 Suspended twenty feet from the dome of a San Francisco library and integrated into its superstructure, this dynamic (22 x 50 x 50 ft) constellation contains individually-distinct hand-polished steel hoops of various widths and recycled steel, some with polka dots, some finished with other designs.

This developing community near the Cow Palace originally conceived of locating the artwork right outside the library. With anticipated tree growth and proximity to the road and gate, we determined the ideal artwork location was the dome of the Renaissance-style library, which complicated parameters significantly. The budget was not large and our proposed work would be structurally-integrated into the newly-built library into the steel superstructure of the building in phases, using huge, large specialty "bolts." The sculpture's simple lines belie its technical complexity (no wires); it is able to withstand enormous weight enabling a truck to be suspended off of it.

Designed to evoke astrological, technological... open-ended themes, it was comprised of distinct, hand-finished interconnecting steel hoops with individualized hand-polished details. This massive, lyrical, technically-challenging work had to be constructed off-site under a replicated ceiling to line up connections (no wires), then disassembled in twelve parts to fit through the doors, only to be reassembled inside the library. Adhering to earth-quaking requirements, fans and light sway, window cleaning specifications, etc., it also contains a large cantilevered element. It incorporated community as well as firsthand architect input and is described by Andrew Maloney, (the San Francisco city architect involved in every aspect included sanding down walls to a finish he personally liked,) as the library’s "jewel." San Francisco Arts Commission Judy Moran and several project managers (including Mary Chou), also contributed greatly to the artwork.

Artwork was the only one whose photo was included in the 2013 mayor's report and was showcased in library publications. It was also featured in Heydey’s, “San Francisco: Arts for the City Civic Art and Urban Change: 1932-2012.”