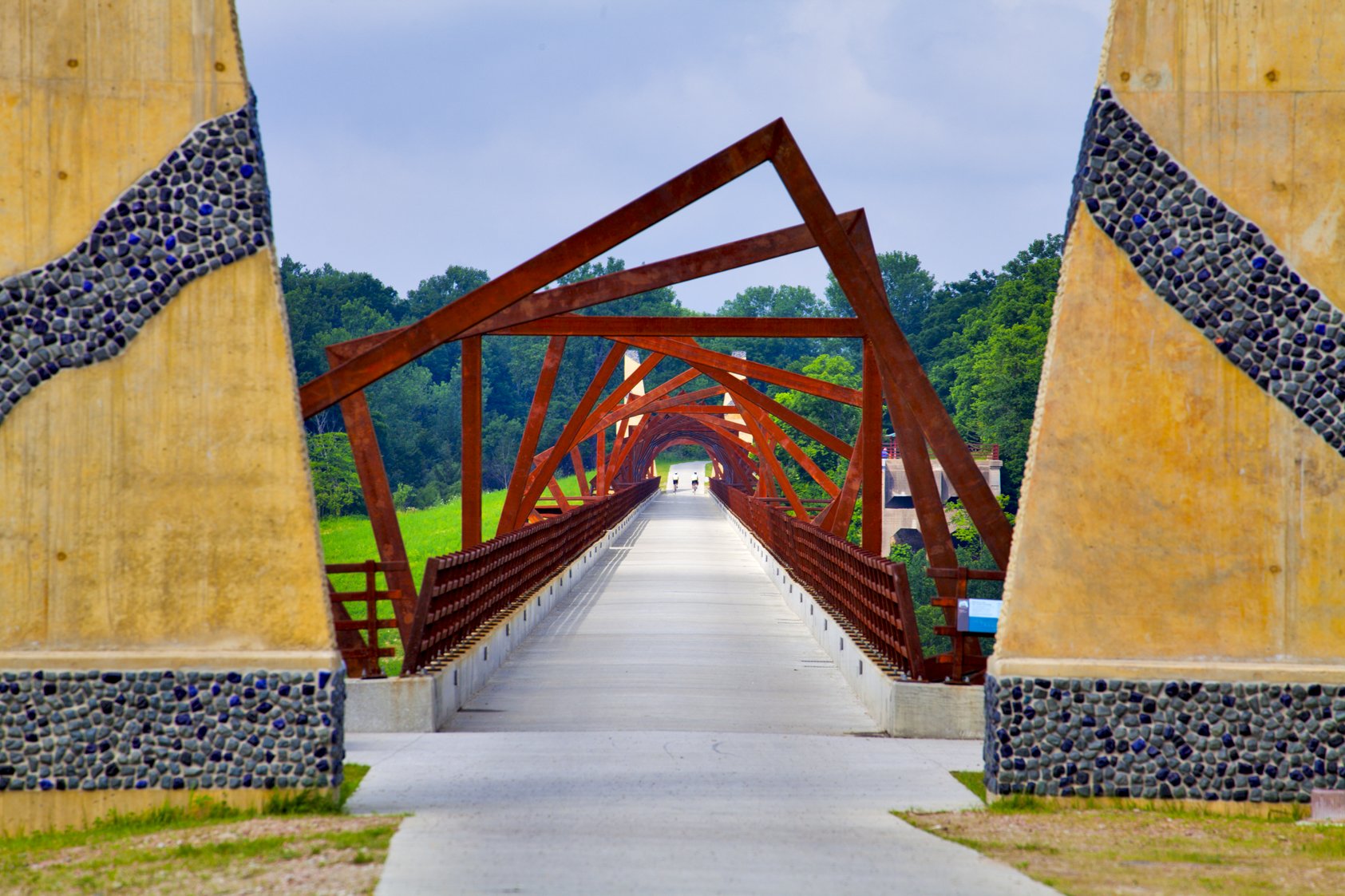 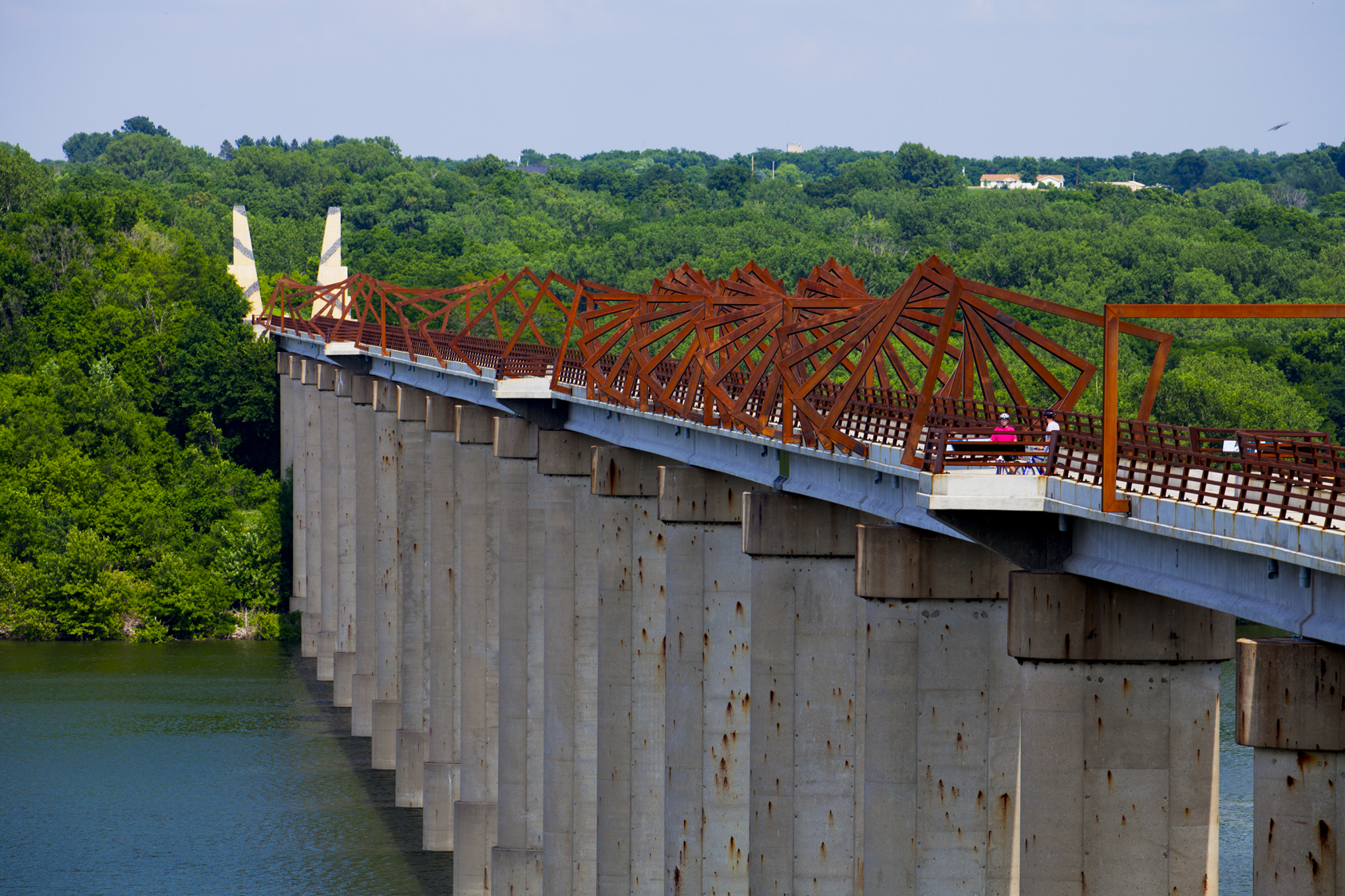 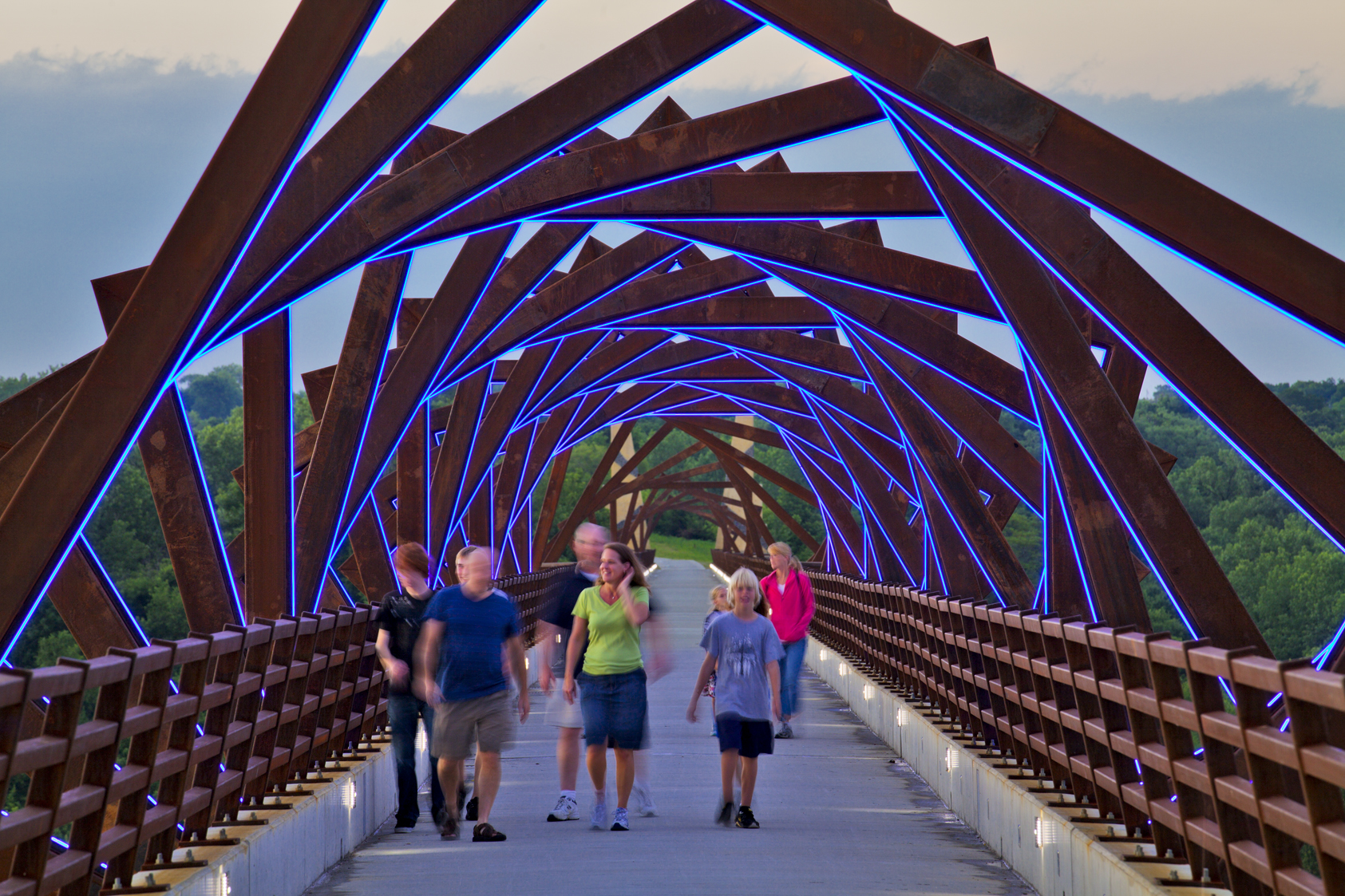 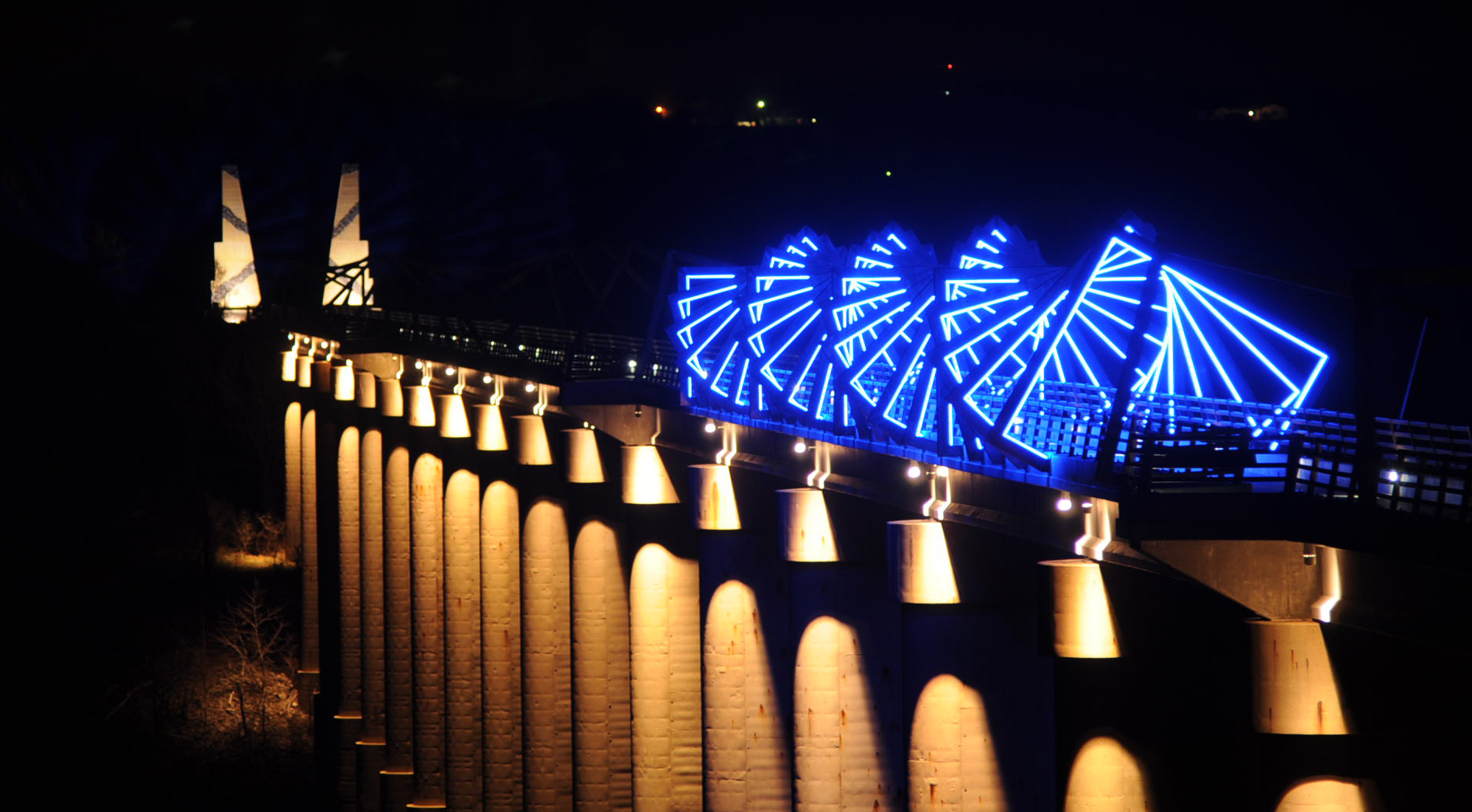 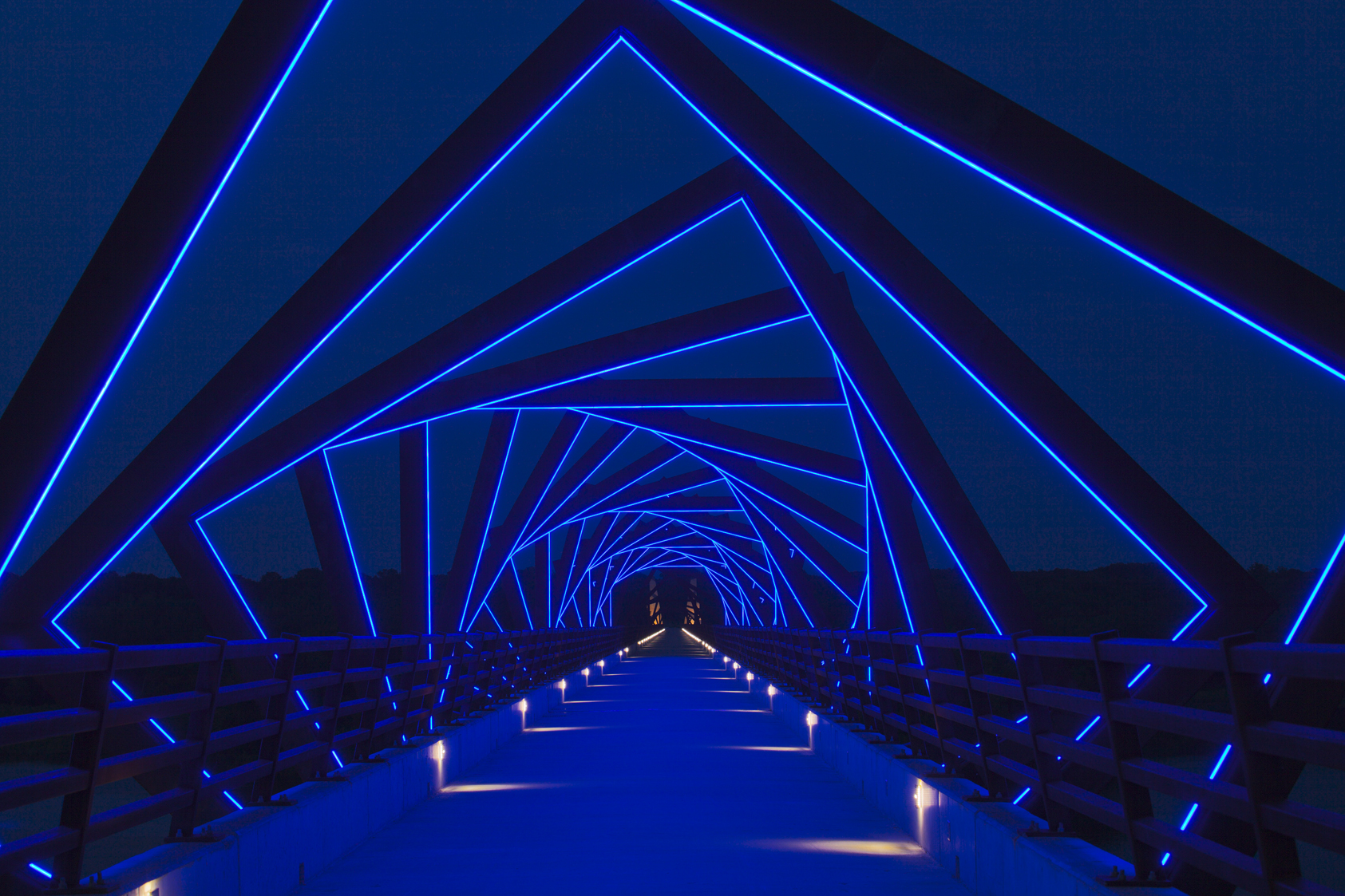 The project, entitled “From Here to There,” for the High Trestle Trail Bridge, is both a physical and symbolic connection to the fifth longest pedestrian and bicycle bridge in the country. The bridge, over a half mile long spanning the Des Moines River Valley, connects over 600 miles of trail in central Iowa. Based on coal mining history and geology of the area, the site-specific installation creates a meaningful “Art-in-Transit” experience and sculptural icon for people from across the country.

One of the primary considerations of the commission was to design and create a destination with the potential of becoming a new cultural landmark, growing a larger audience to use the trail network. The project has been recognized as a major contribution to regional economic development, with an additional 15 to 20,000 people per month traveling to the local communities on both sides of the bridge. New restaurants, historic restoration, and a variety of other related improvements have accompanied the project with the development of related themes.

Engineering design could have successfully taken people from point to point, however, it was the “story,” embodied in the purposeful integration to the architectural structure that captured people’s imagination and created a relevant experience. Scale (monumentality) and context were encouraged over narrative text panels.
The artwork takes into account many factors and functions on many levels, expressively using materials to interpret history. Lighting is also a significant factor, thoughtful of the site as it changes from day to night, as well as extending the usage of the trail and bridge. The installation is now the”keystone,” uniting five distinct communities along the trail.

The public artist began the project with extensive research to develop design options that were vetted through a series of public presentations. Public input was an important part of the project, with the artist as facilitator in each community along the trail. These on-site workshops galvanized support in relationship to the heritage of the Italian immigrants that worked in the mines and whose families still live throughout the area. The multi-disciplinary design team collaborated in numerous charrettes between public artist, engineers (civil, structural, electrical), architect, lighting designer, owner and the public. Over a dozen different organizations and entities participated.
As the site-specific concept evolved, collaboration proved critical in testing related engineering, budget, and solving a myriad of details. Without this collaboration, the necessary dialogue would not have taken place.

A project of this magnitude is a matter of relationship building. While every great project may begin with a great story, this installation grew and the story became more important as each discipline and agency became more involved in the process. Ultimately, it is through collaboration that the public was welcomed into the story and have continued to share it with others.

State-of-the-art technology was used to communicate the design intent, including a virtual reality video of riding across the bridge. This was instrumental in securing the largest state economic development grant to date, as well as a successful private fundraising. Because substantial funding came from the DOT, the project had to comply with numerous code applications, including having all welds inspected, outside of the railing at over 130 feet above the river valley. As part of the state initiative on health, the installation is regularly programmed, including 12 monthly “Rides of the Full Moon” featuring picnics on the bridge.